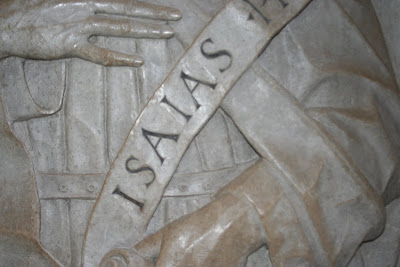 After a decade of quiescence Legacy of Letters is back with a new lettering tour of Italy. This time the tour, led by Paul Shaw and Alta Price, will bypass Rome and Florence and instead explore the Veneto and Emilia-Romagna regions. They are home to some of the most exciting, though lesser-known, lettering in a country rich in extraordinary lettering. The ten-day tour will go from Aquileia to Rimini with stops in Venice, Verona, Vicenza, Padua and Ravenna. Some of the sites to be visited will be San Marco and the Biblioteca Marciana in Venice, the Scrovegni Chapel in Padua, the Villa Rotonda in Vicenza, the Scipione Maffei collection of Roman inscriptions in Verona, the Tipoteca in Cornuda, the Tempio Malatestiano in Rimini, and the mosaics of Sant’Apollinare in Classe.

The Legacy of Letters 2010 tour will focus on inscriptional lettering from ancient Rome to the Baroque, Renaissance manuscripts and incunabula, 19th-century Italian wood type, Fascist inscriptions, and 20th-century Italian metal type. Workshops on calligraphy and letterpress printing are scheduled for one weekend. There will also be informal conversations with several contemporary Italian calligraphers, typographers and graphic designers.

As a break from such a deep immersion in letters, there will be visits to some of Palladio’s major buildings, the Canova museum, and several architectural works by Carlo Scarpa. There will also be opportunities to enjoy the great food and wine of the Veneto and Emilia-Romagna regions. All in all, the tour will appeal to calligraphers, typographers, graphic designers, art historians, artists, architects, and anyone else who loves letters.

The price of the 10-day tour is $3900 ($3300 for college students)*. This includes all hotels, breakfast, three special dinners, buses and other ground transportation, museum and other admission fees, and all workshop costs. It does not include the cost of air travel to and from Italy or meals other than those specified above. To secure a space, a deposit of $1500 is due upon registration with the balance due May 15. An early-bird discount of $300 is offered for those who pay the entire tour cost by April 15. If the tour is canceled for any reason or a participant must withdraw prior to May 15 the tour fee will be returned minus $200 for administrative costs. There will be no refunds after May 15 other than for documented serious medical reasons.

For questions about the tour contact Paul Shaw at paulshaw@nyc.rr.com

*Prices are based on double room occupancy. Single room occupancy will be available on a limited basis for a total surcharge of $200 for the 11 nights. College students must present a current identification card as proof of their enrollment.

Paul Shaw is widely known and respected as a guide to urban lettering. With Garrett Boge he co-founded and led the original Legacy of Letters tours of Rome, Florence and Tuscany from 1997 to 2000. On his own he has conducted regular walking tours of lettering in New York City since 2005 for the Type Directors Club and other organizations. He has also led similar tours of Boston, Buffalo and Atlanta for SoTA (the Society of Typographic Aficionados). Paul is the principal of Paul Shaw / Letter Design. He has been a calligrapher for over 40 years and has designed 18 typefaces. He currently teaches calligraphy at Parsons School of Design and the history of typography at the School of Visual Arts. In 2002 Paul was a Fellow at the American Academy in Rome. He has written about calligraphy, lettering and type for Letter Arts Review, Print, Eye, Baseline, AIGA Voice and other magazines.

Alta Price runs an editorial consulting and trans-lating business specialized in art and architecture texts. She has translated texts on subjects ranging

from Caravaggio to contemporary sculpture, Egypto-Armenian photography, and the vertiginous nature of list-making. Fluent in Italian and well-versed in German, Spanish, and French, she has also acted as coordinator for international art-related congresses. Alta became enamored of epigraphy, paleography, and lettering of all sorts while living in Rome. She holds a BFA in Printmaking and Art History from the Rhode Island School of Design and an MFA in Combined Media from Hunter College. Her artistic practice ranges from paper- and watermark-making to collage, stop-motion animation, and book objects. She is currently based in Long Island City, and occasionally joins Paul to explore some of the more oddly lettered corners of New York City. She is also a guest columnist for the website 3 Quarks Daily.