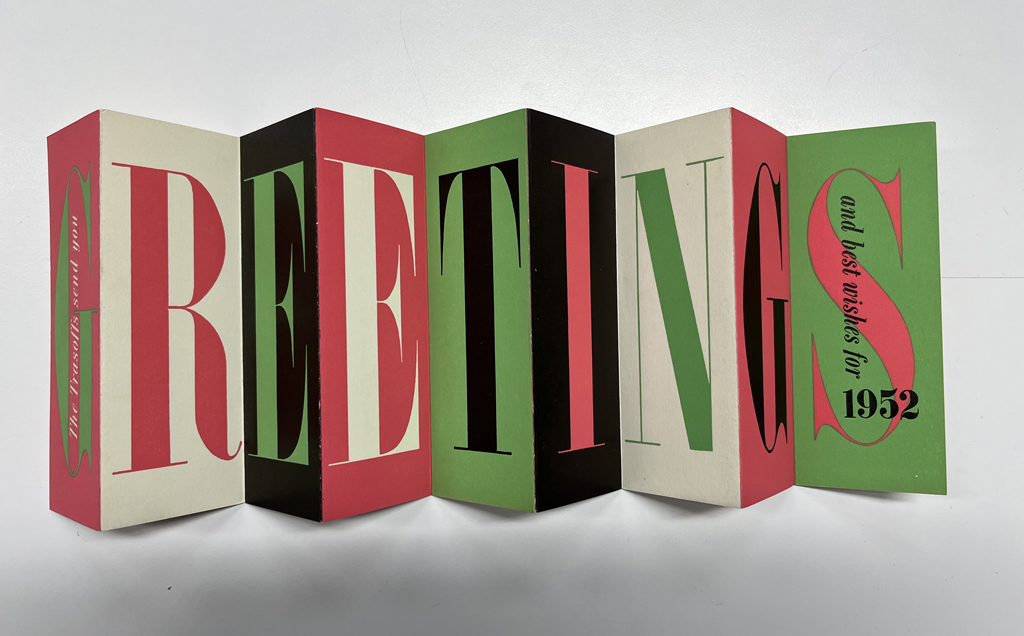 The second Letterforms Study group session took place on 15 December 2022 at the Herb Lubalin Center of Design and Typography at The Cooper Union. Curator Alex (Sasha) Tochilovsky graciously provided the meeting space again and also helped me sort through the Center’s collection of holiday greeting cards, the theme of the session. Although I had expected a large number of calligraphic cards, given Cooper Union’s longtime history of including calligraphy in its curriculum, we only found a handful—and none from the school’s best known teachers and students in this area such as George Salter, Phil Grushkin, Paul Standard, Ismar David, and Jeanyee Wong. I rectified this deficiency to some degree by bringing a batch of holiday cards I had designed as well as a number that I had received, including from Hermann Zapf, Werner Schneider, Michael Harvey, Jean Larcher, Hermann Kilian (1929–2004), Christopher Haanes, and Kristoffel Boudens. Anna Pinto brought many more calligraphic holiday cards. Her cache included many of mine that I had been unable to find quickly as well as cards by Susan Skarsgard, Emily Brown Shields, Patricia Weisberg, Nancy Leavitt, Louise Grunewald, and some of her own.* 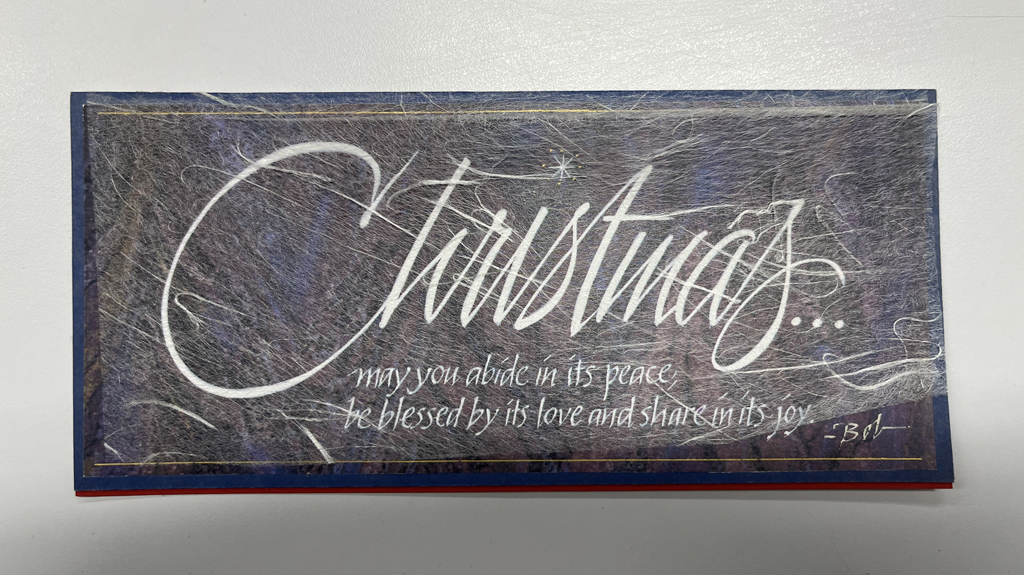 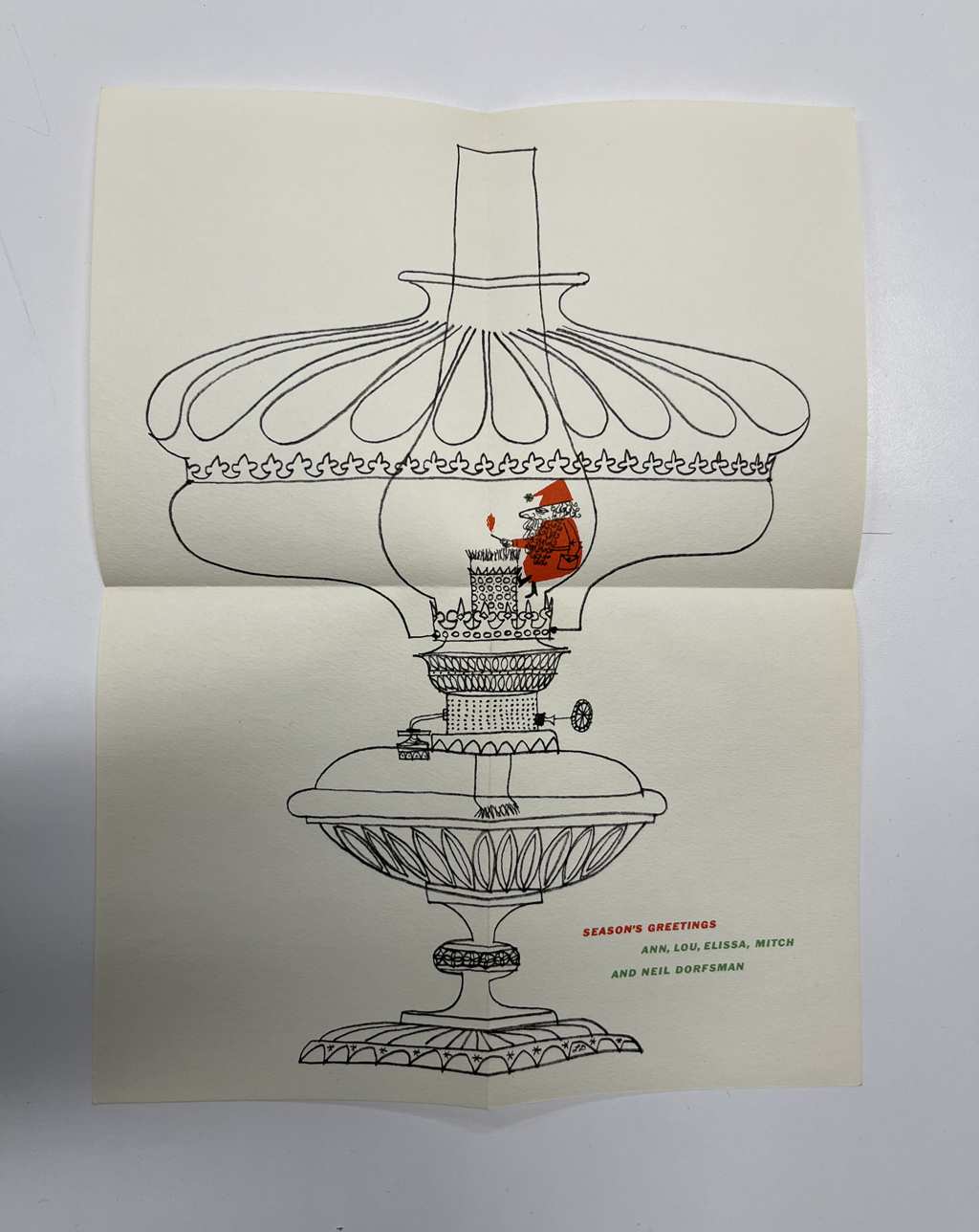 Christmas card from Lou Dorfsman who did the illustration (1950s).

Holiday card from Elaine Lustig Cohen and Arthur Cohen. The design by Elaine is a recipe for a mulled cocktail. 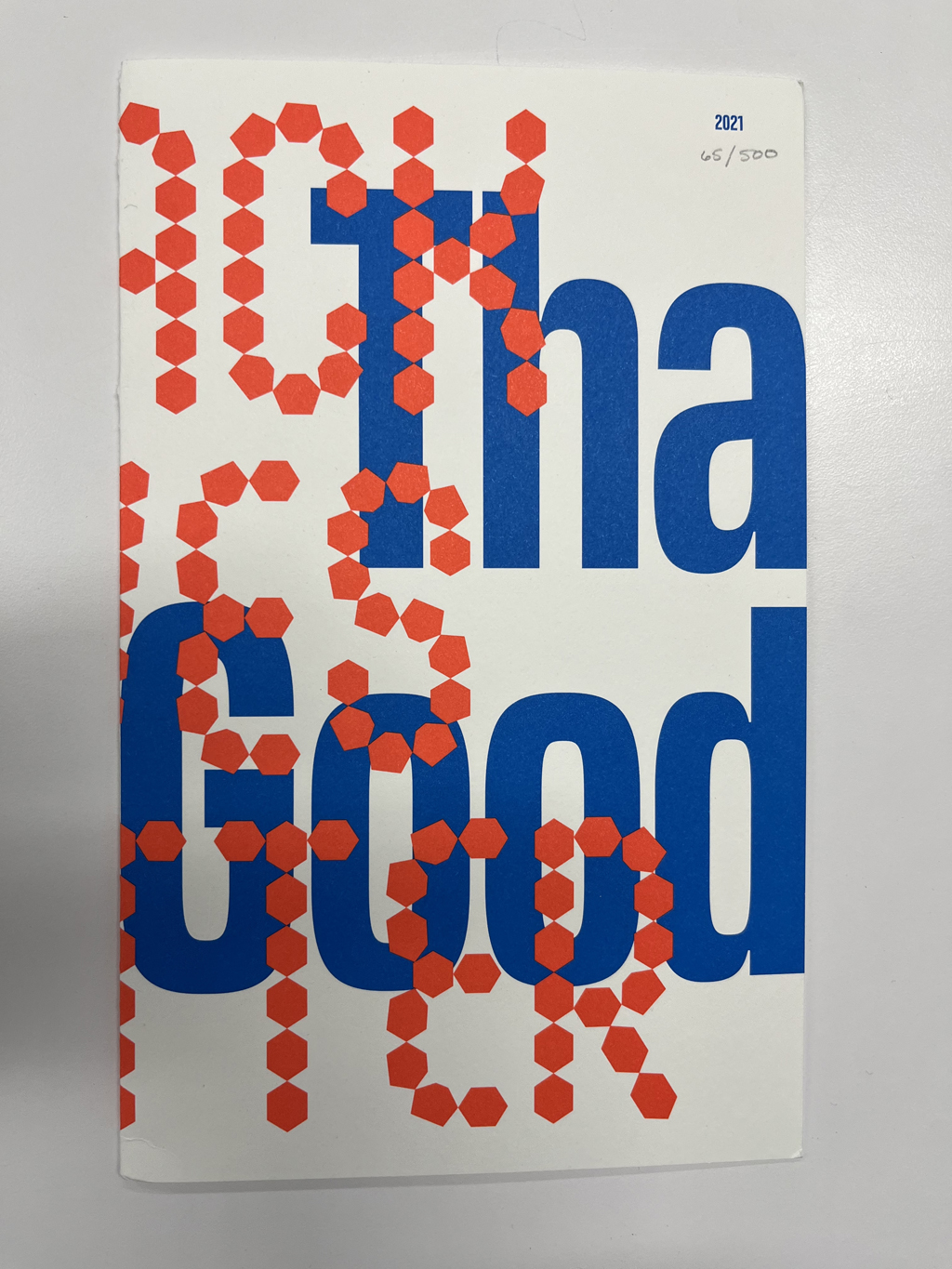 Holiday card from The Original Champions of Design. 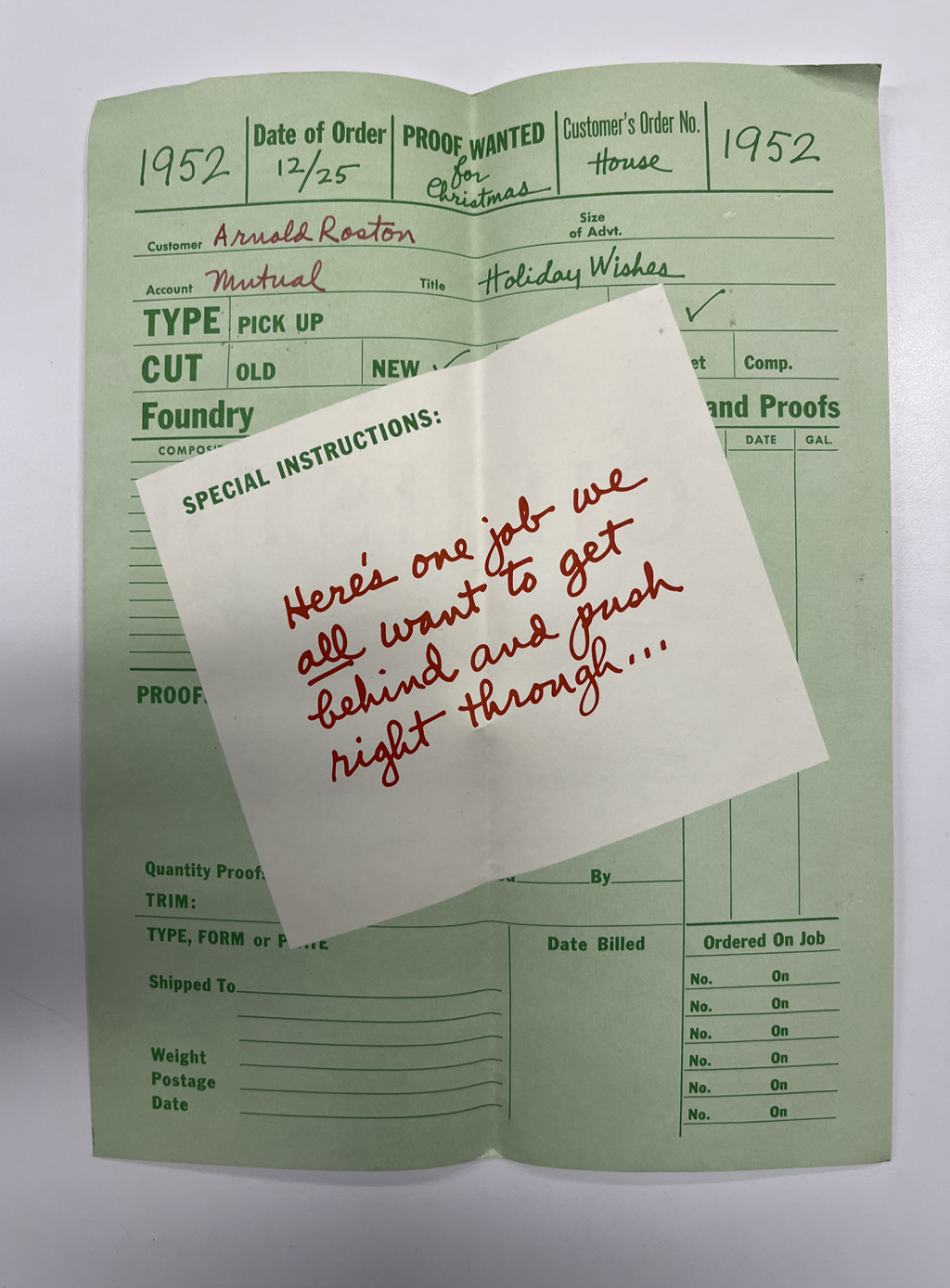 Holiday card from Arnold Rosten (1952) referencing a job order for a type house. 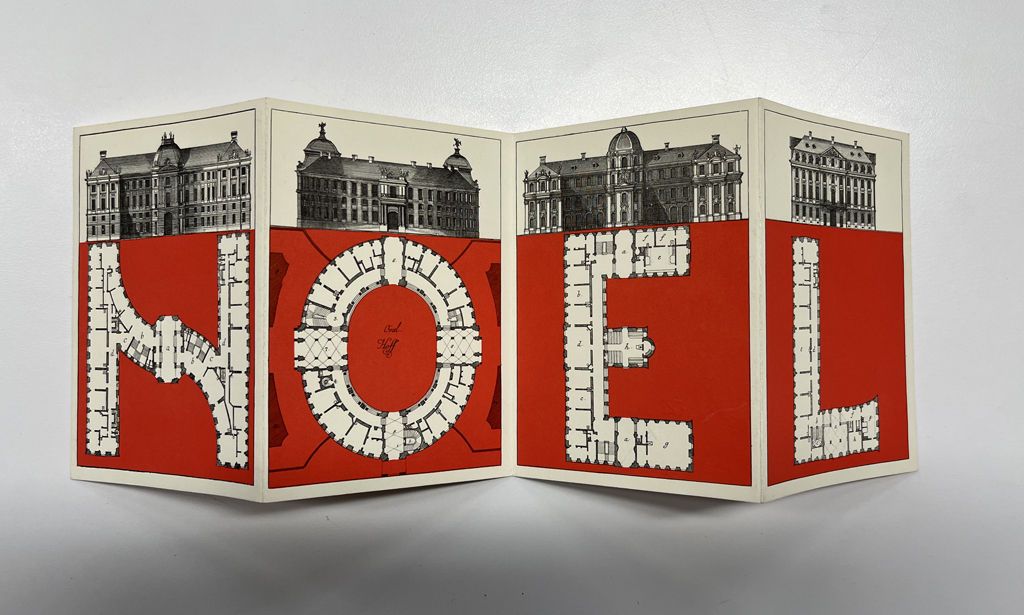 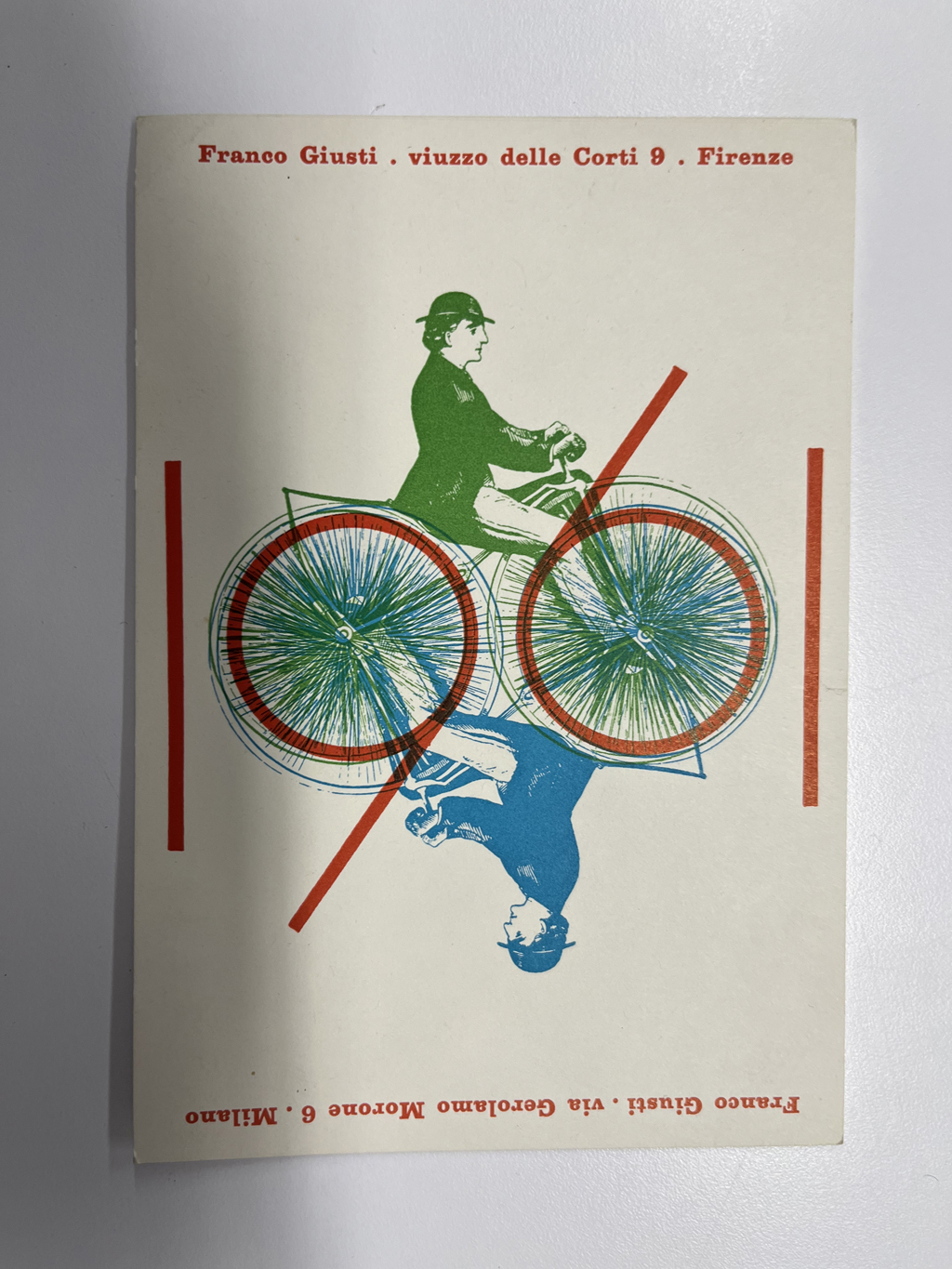 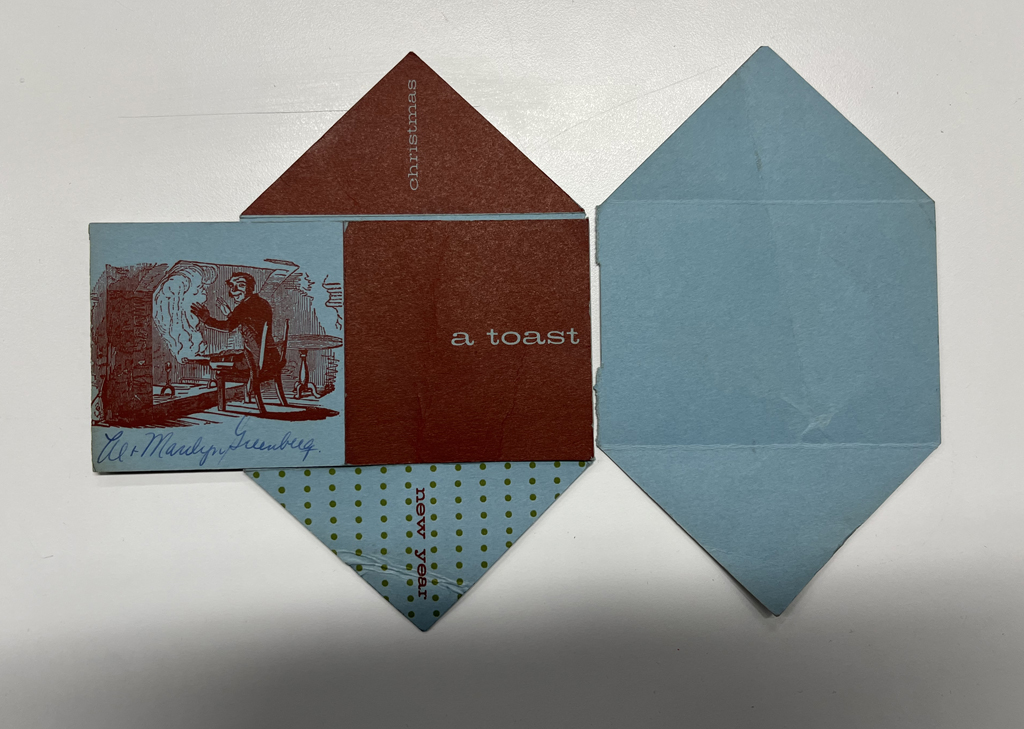 Christmas and New Year’s card from Al Greenberg and Marilyn Hoffner. This card eventually folded into a cube. 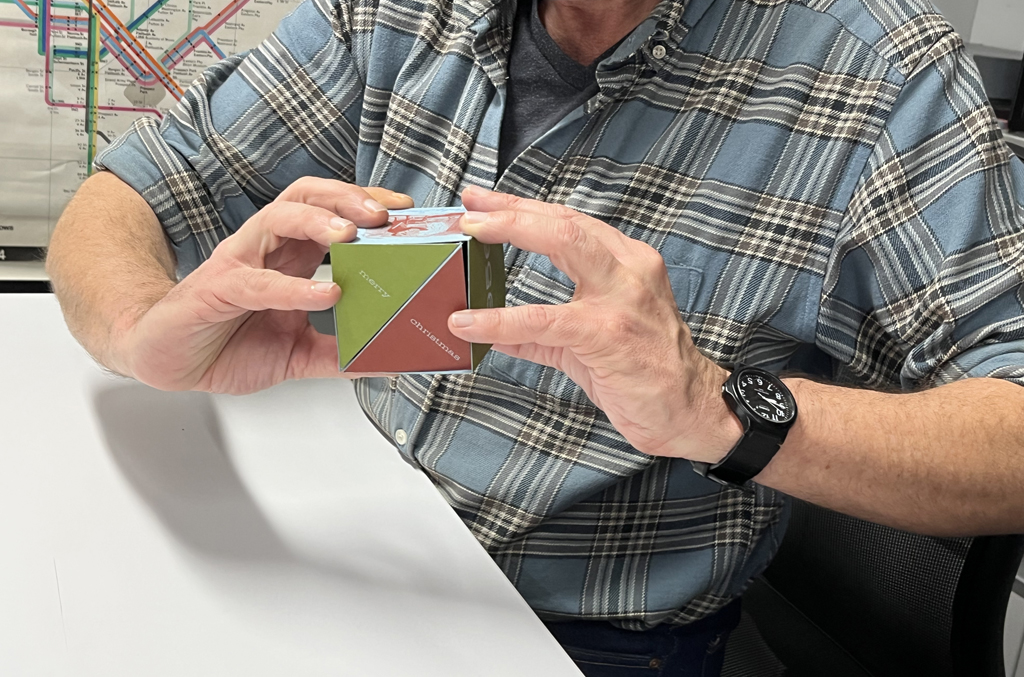 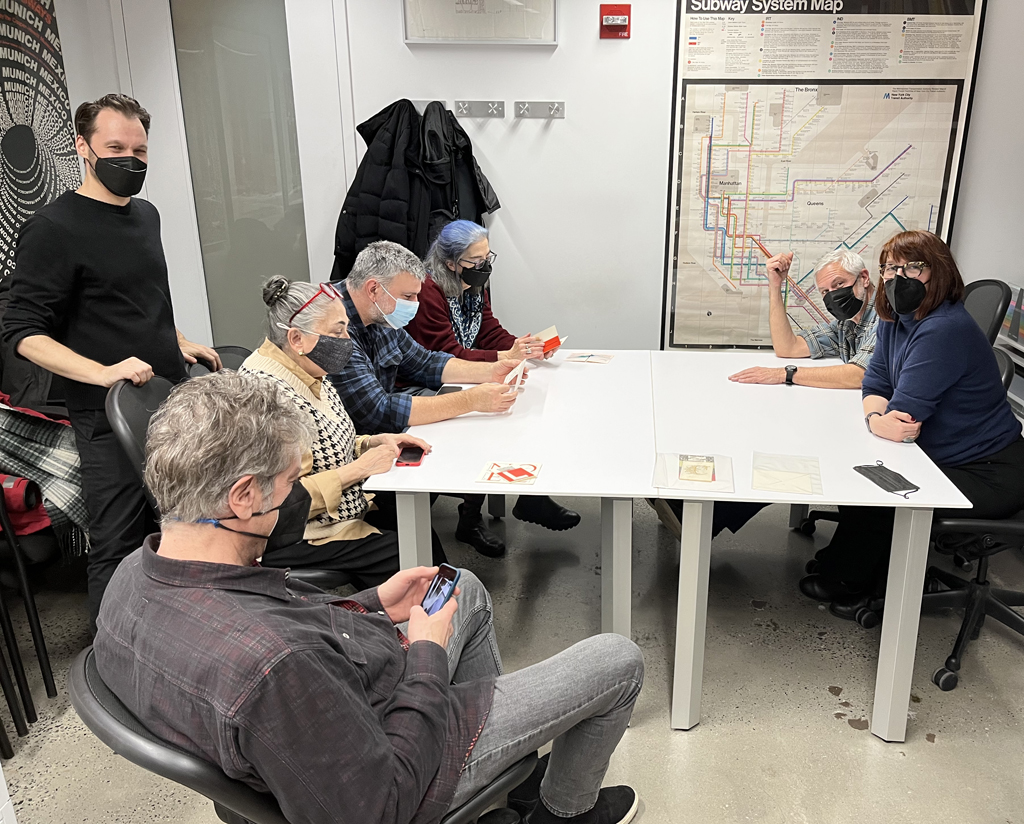 The session attracted six participants, two of whom unfortunately had to cancel. But their places were filled by two additional participants who were not on my list. The final group consisted of Christopher Calderhead, Greg D’Onofrio, Carrie Hamilton, Anna Pinto, Scott Santoro, and Carmile Zaino. It was a different mix of participants than those who attended the wood type session, but it was just as lively. Christopher was especially good at figuring out how some of the folded cards opened up, including one that was in two pieces that had baffled Alex and I (see the card above from Al Greenberg and Marilyn Hoffner). Anna discovered that one of the more complex folded cards was designed by Karl Koehler, who was a friend of her parents (see the photo below of the card held by Carrie Hamilton). (She later sent Alex and myself a photo of the same card from her archives.) Greg brought a maquette—unfortunately with pieces coming apart—for a card by Lou Dorfsman that was not in the Lubalin Center collection. And Carmile wrapped up the evening by producing a matchbox containing a miniature accordion book titled The 12 Days of Christmas designed by Steve Kennedy, one of her colleagues at Parsons School of Design. 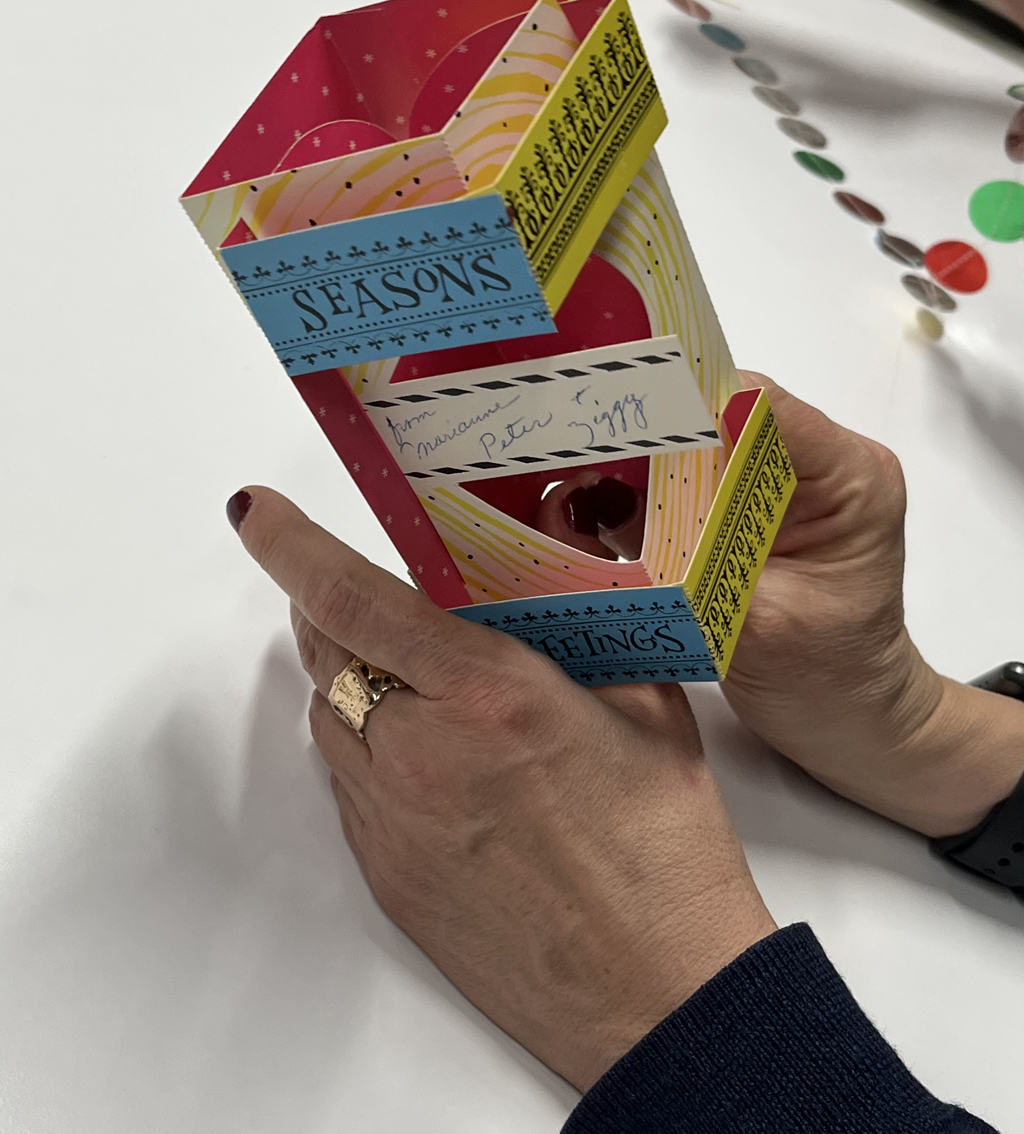 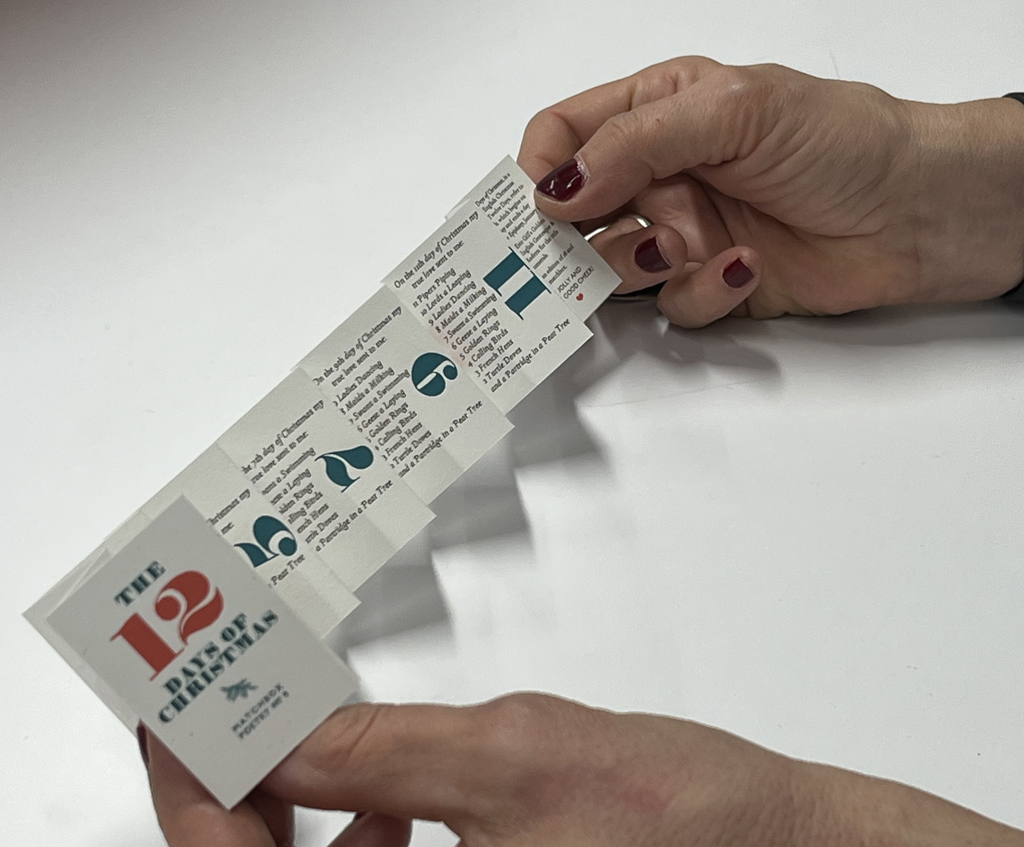 We began the evening with the cards by calligraphers and lettering artists. 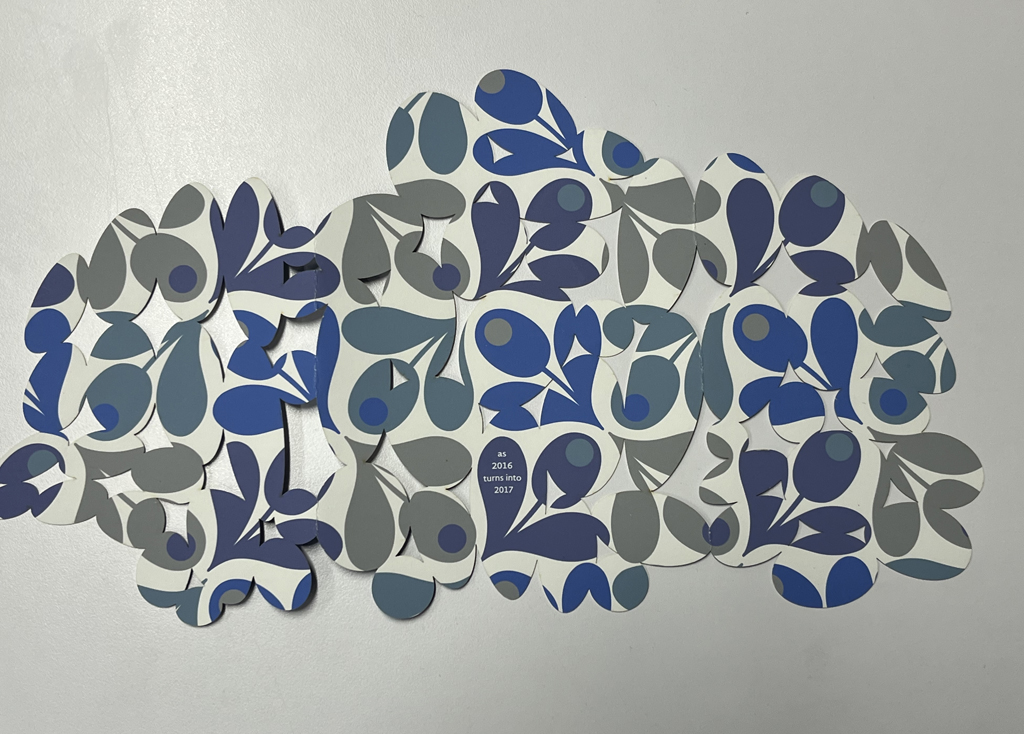 Front of holiday card from calligrapher, artist, and graphic designer Susan Skarsgard (2016/2017). It was laser cut. Various wishes for the new year were printed on the reverse.

Next up were a large number of cards from Herb Lubalin and his associates and from Lou Dorfsman, his Cooper Union classmate and lifelong friend. 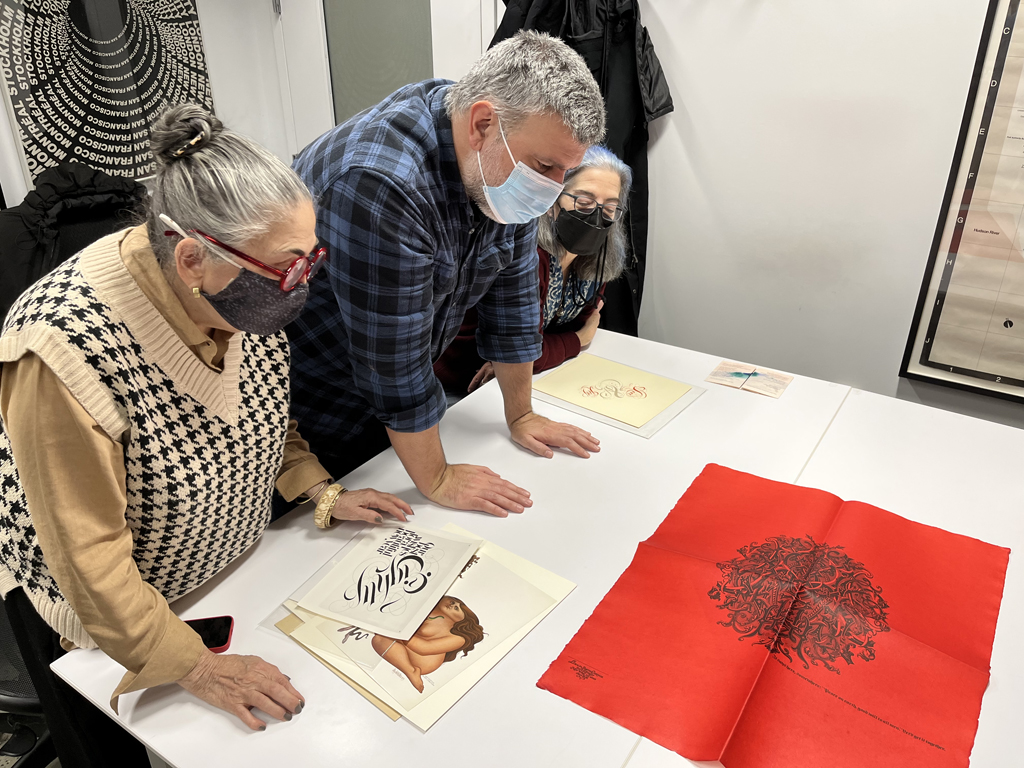 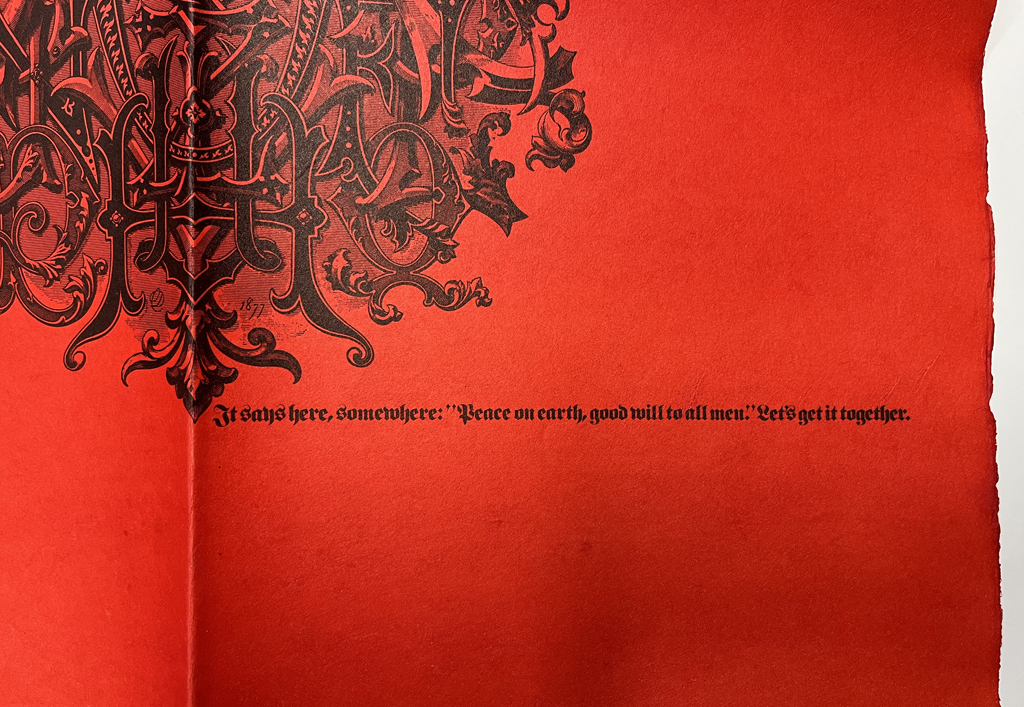 Detail of the above card from Lubalin, Smith & Carnase. 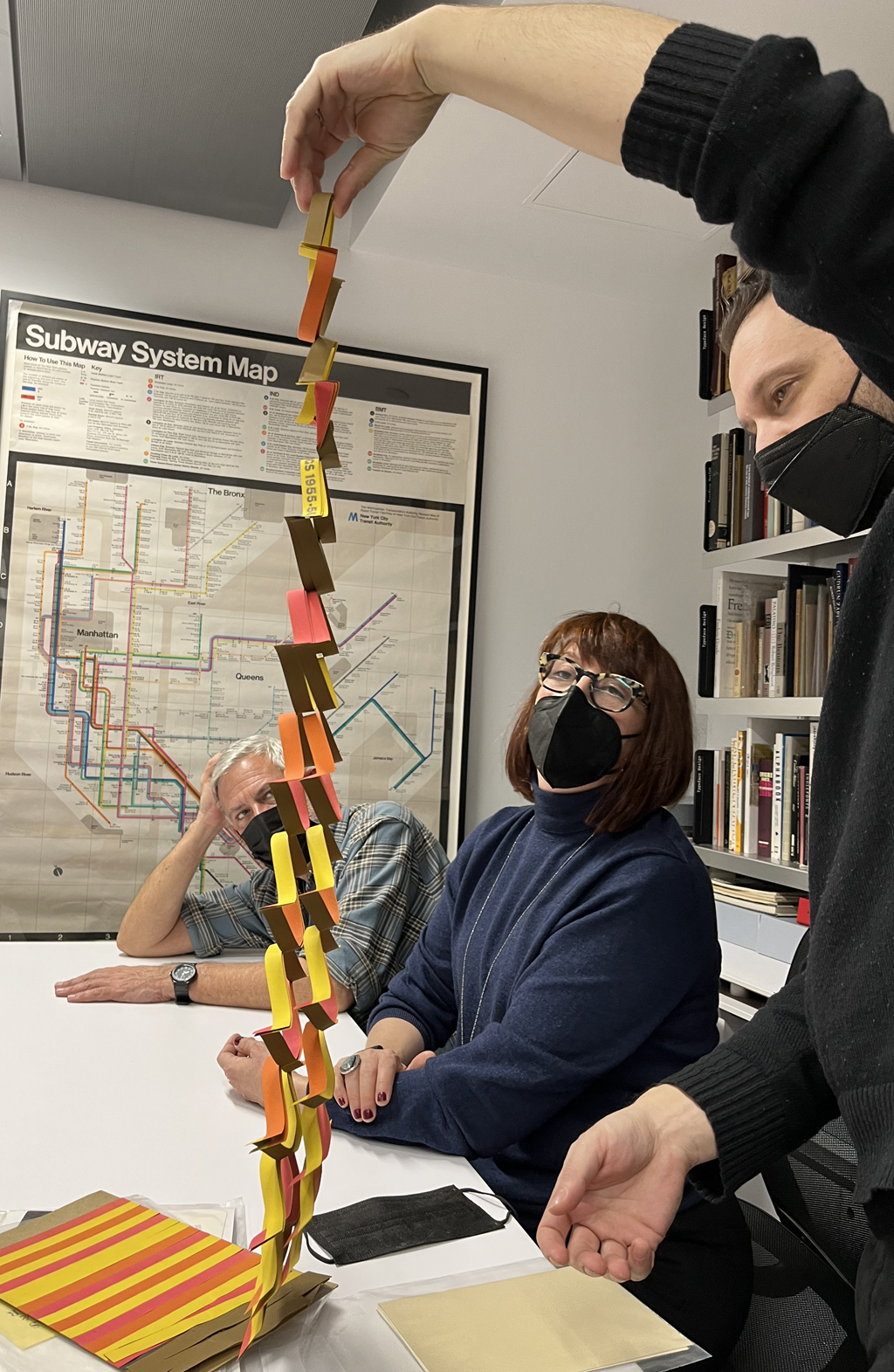 Then we took a look at some fascinating cards by a range of modernist designers and design studios, including W.H. Sandberg, Ladislav Sutnar, Lester Beall, Yusako Kamekura, and Studio Boggeri. 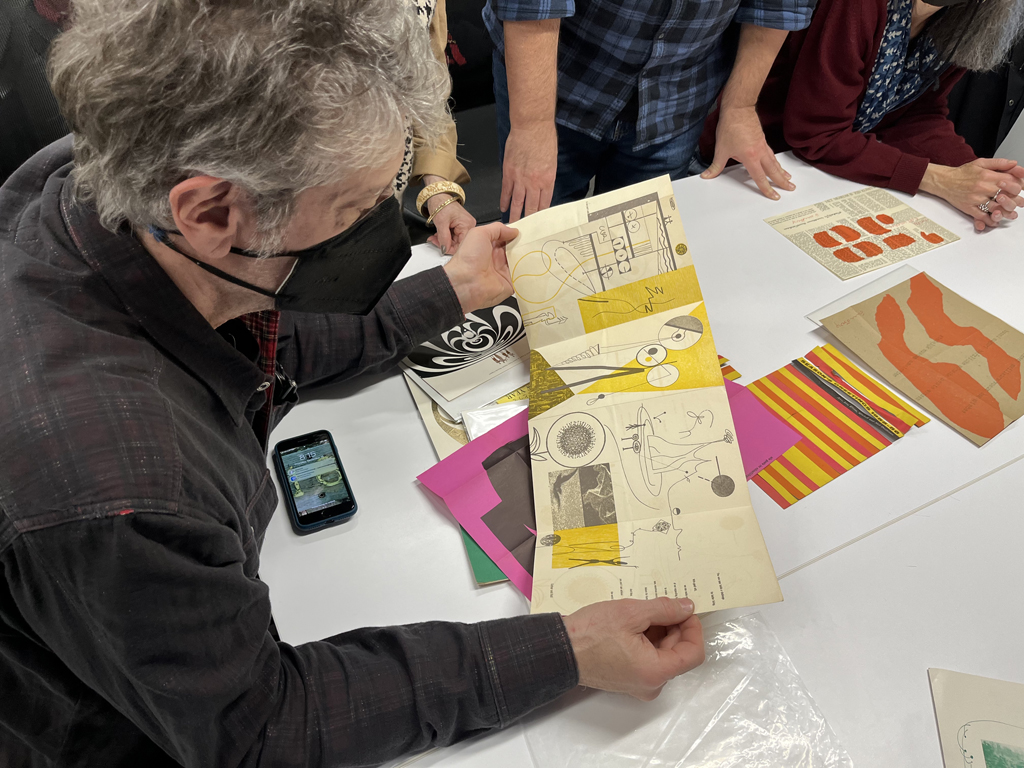 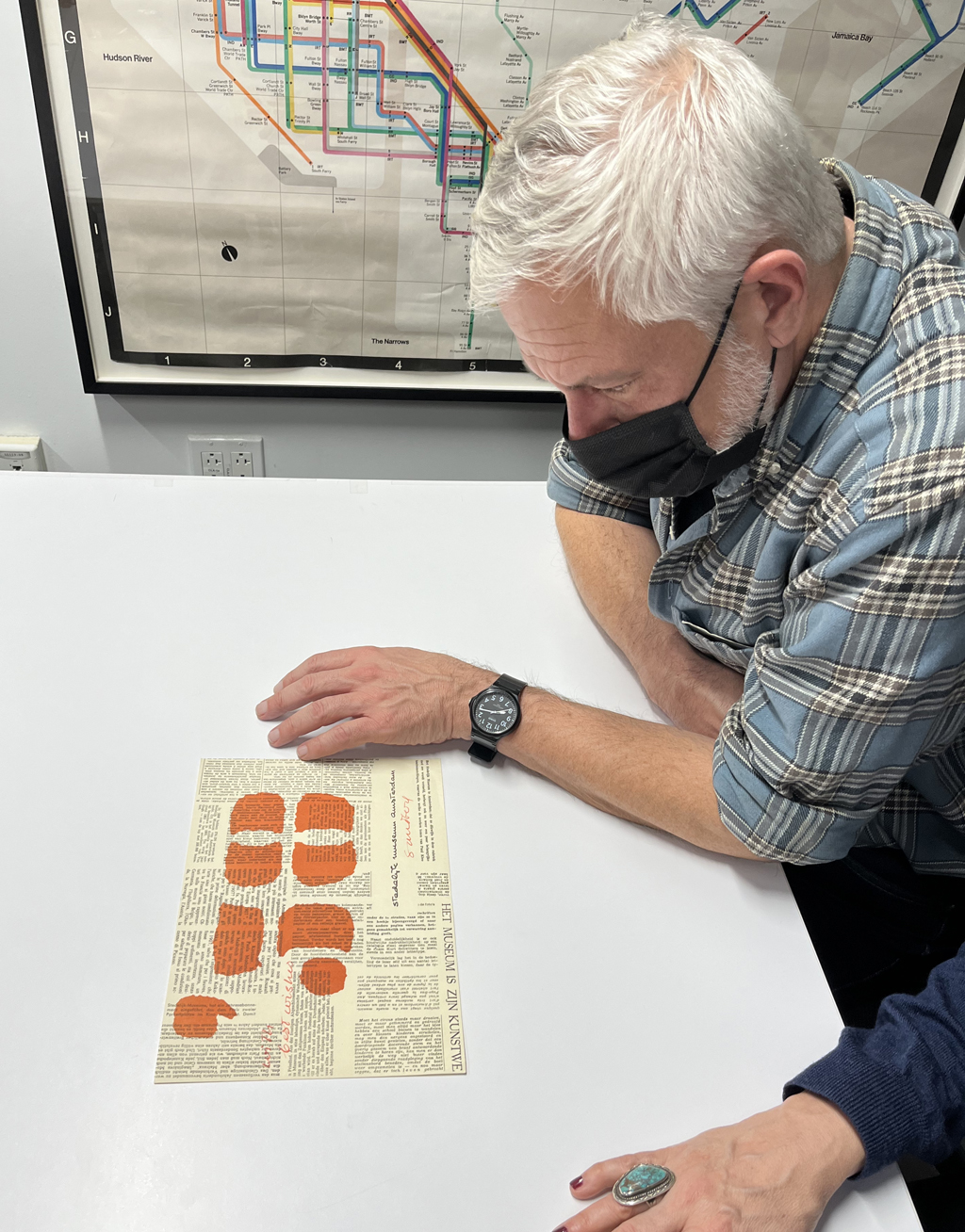 Christopher looks at a holiday card from W.H. Sandberg (1958). 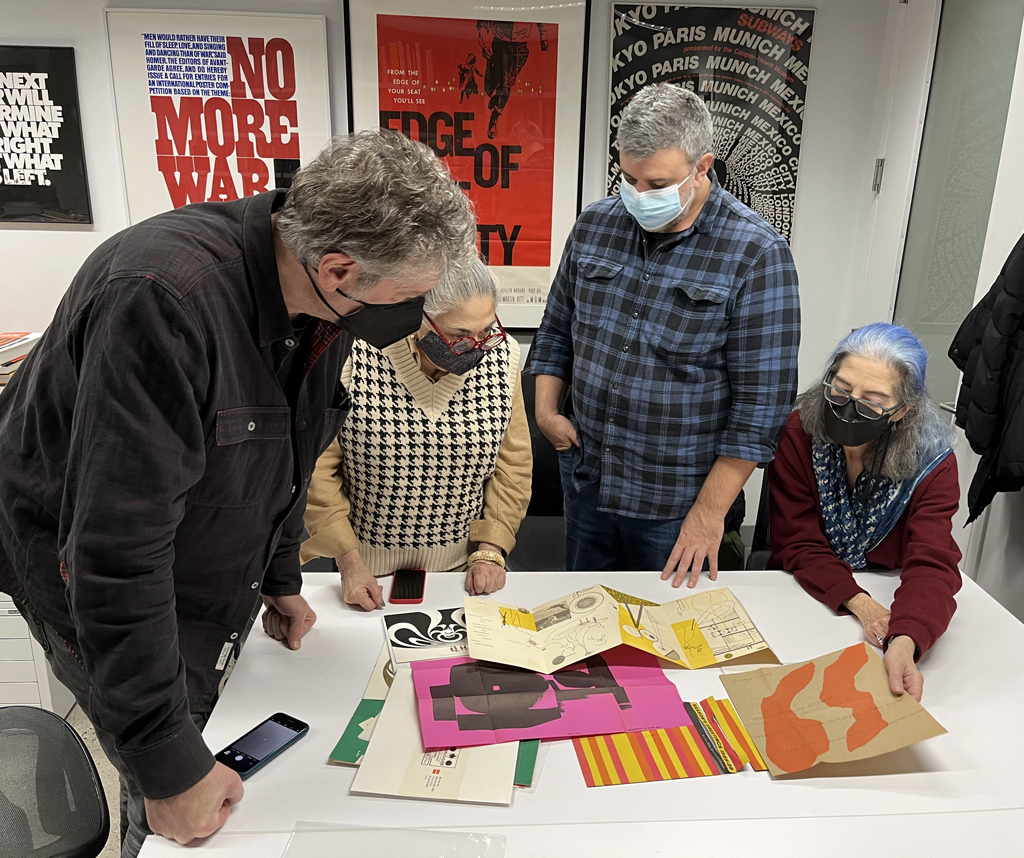 Scott, Carmile, Greg, and Anna look at an array of modernist cards.

We finished with a large number of structurally interesting cards. Some were accordion folded, some opened up like a flower, some transformed themselves into cubes and other three-dimensional forms. There were also die-cut and laser-cut cards. 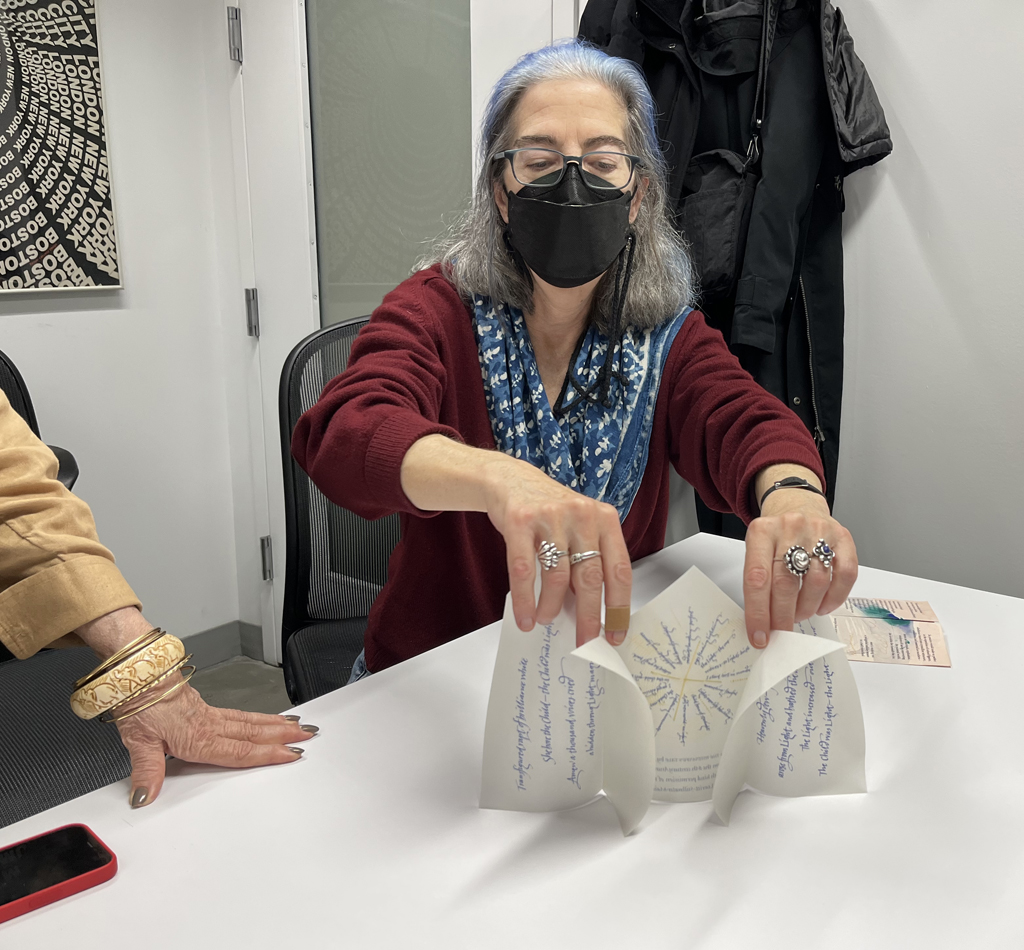 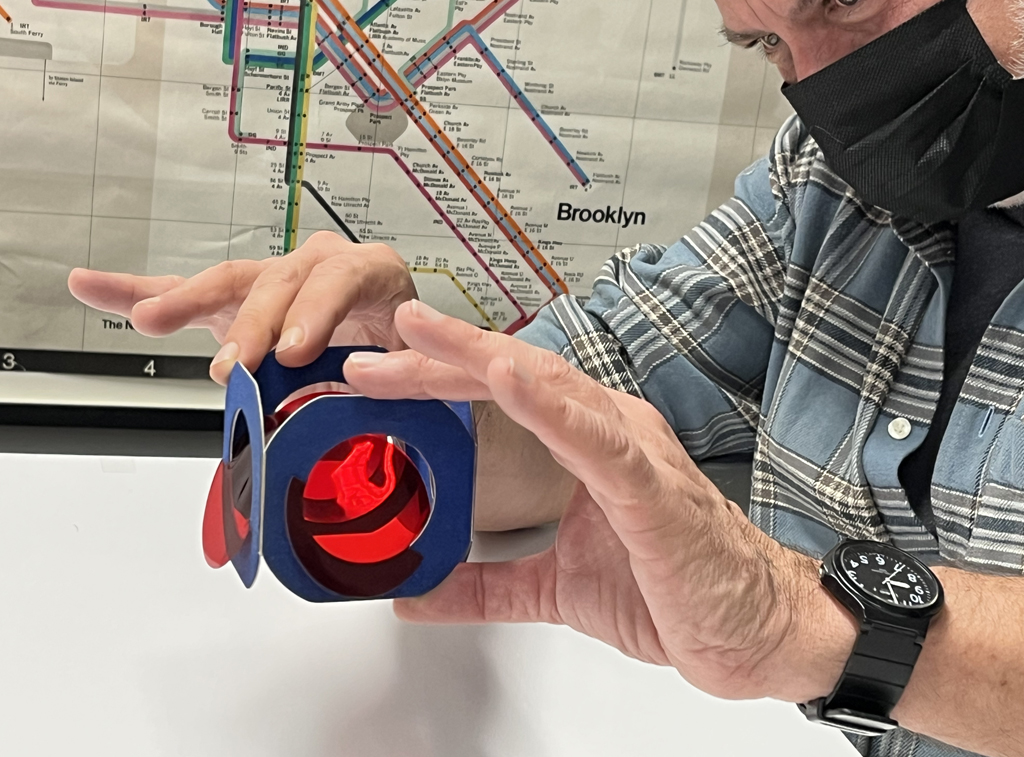 The range of holiday greeting cards was surprisingly diverse, making for a successful second study session.

*Note: for those looking for women missing from the canons of graphic design, check out calligraphers, book jacket designers, and book designers. There are many in those professions, going back to at least the 1890s.