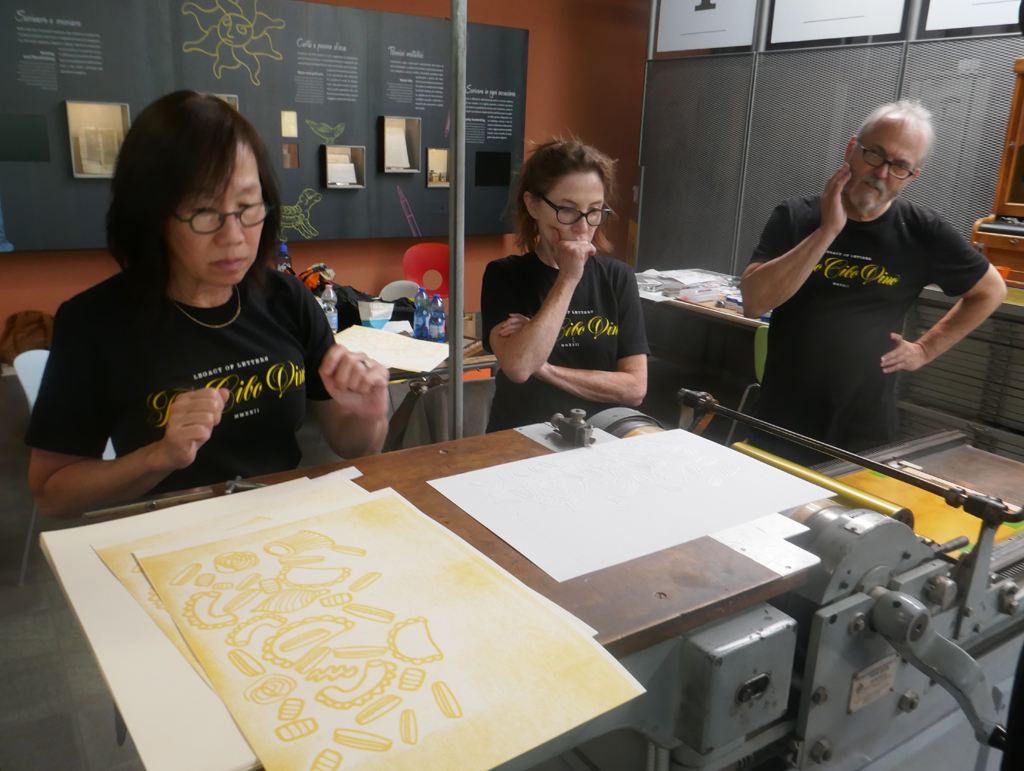 The afternoon before, Lorenz Boegli, owner of Atelier für Siebdruck in Müntschemier, Switzerland, and Swiss publisher Lars Müller, had briefly stopped by the Tipoteca but there was no time to talk at length with them as Silvio Antiga was leading them on a tour of the museum and we were deeply engrossed in the pasta book project. However, this morning Lorenz—described by Silvio as the greatest silkscreen printer in the world—returned to the Tipoteca to see the Matthew Carter a-z type portfolio that James Stroud of Center Street Studio had printed in 2016. Later he joined us for lunch at Le Corderie, where we had a chance to leisurely talk with him. The only inkling we had of his silkscreen mastery was the oversize business card he gave a few of us. But a quick look at Lorenz’s website confirms Silvio’s high estimation of him. 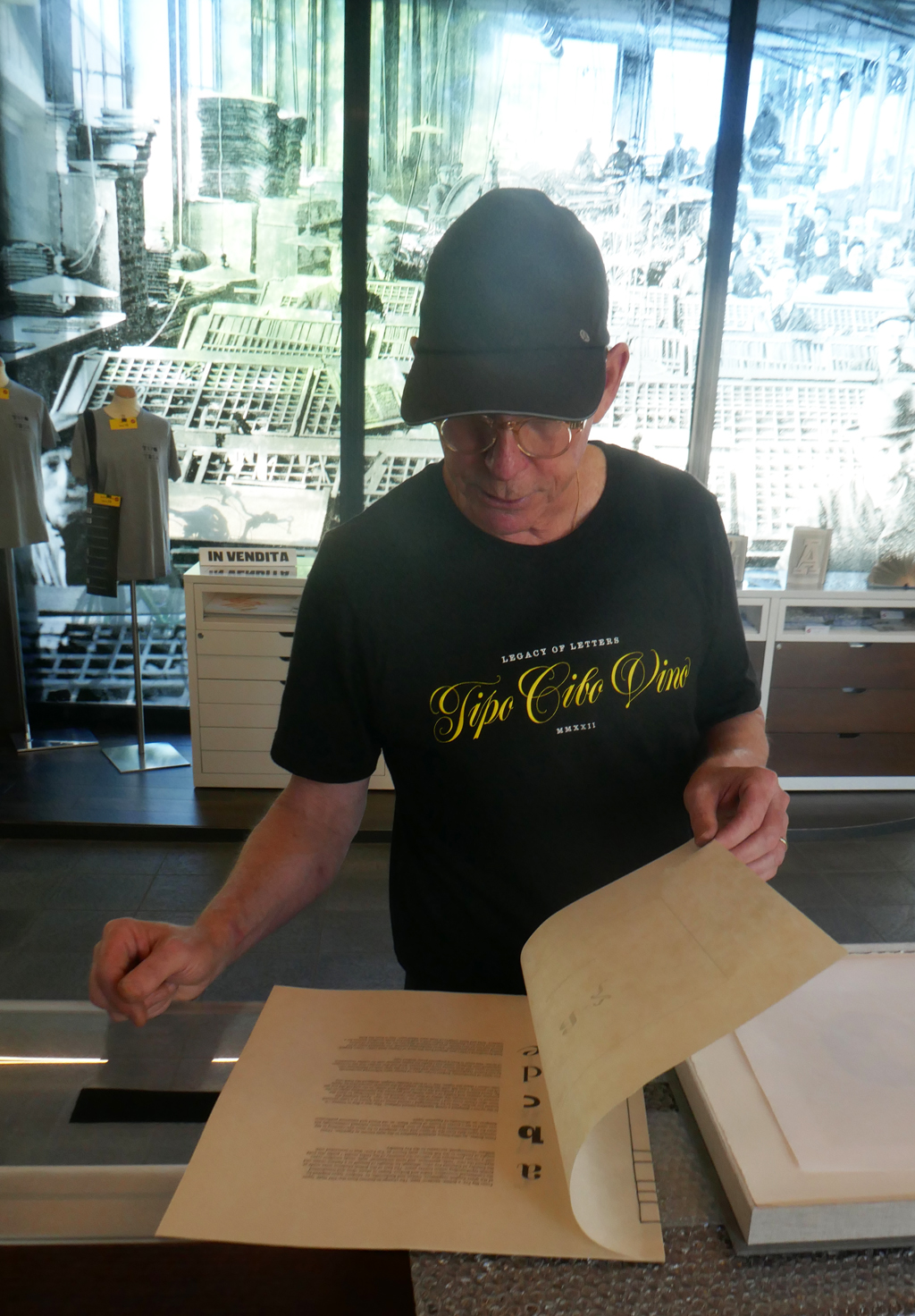 James Stroud setting up his Matthew Carter a-z portfolio in the Tipoteca for Lorenz Boegli to see.

This was a continuation of each participant’s personal spread with yellow (egg pasta) as one of two new colors (the other being red). James and Janine had contiguous spreads as in 2019 and they used the large amount of space to declare “BASTA PASTA” in large yellow wood type. Angelina Lippert used yellow as the color for anellini, small rings of pasta suitable for soups. For George Whitman the color was perfect for commas he was turning into pasta shapes. 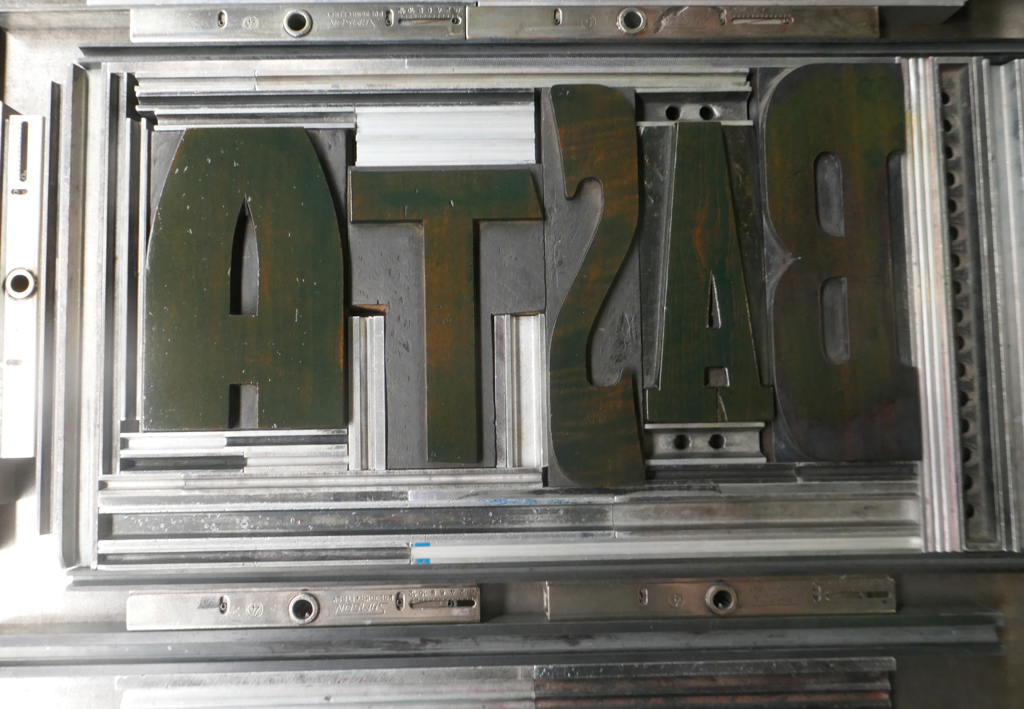 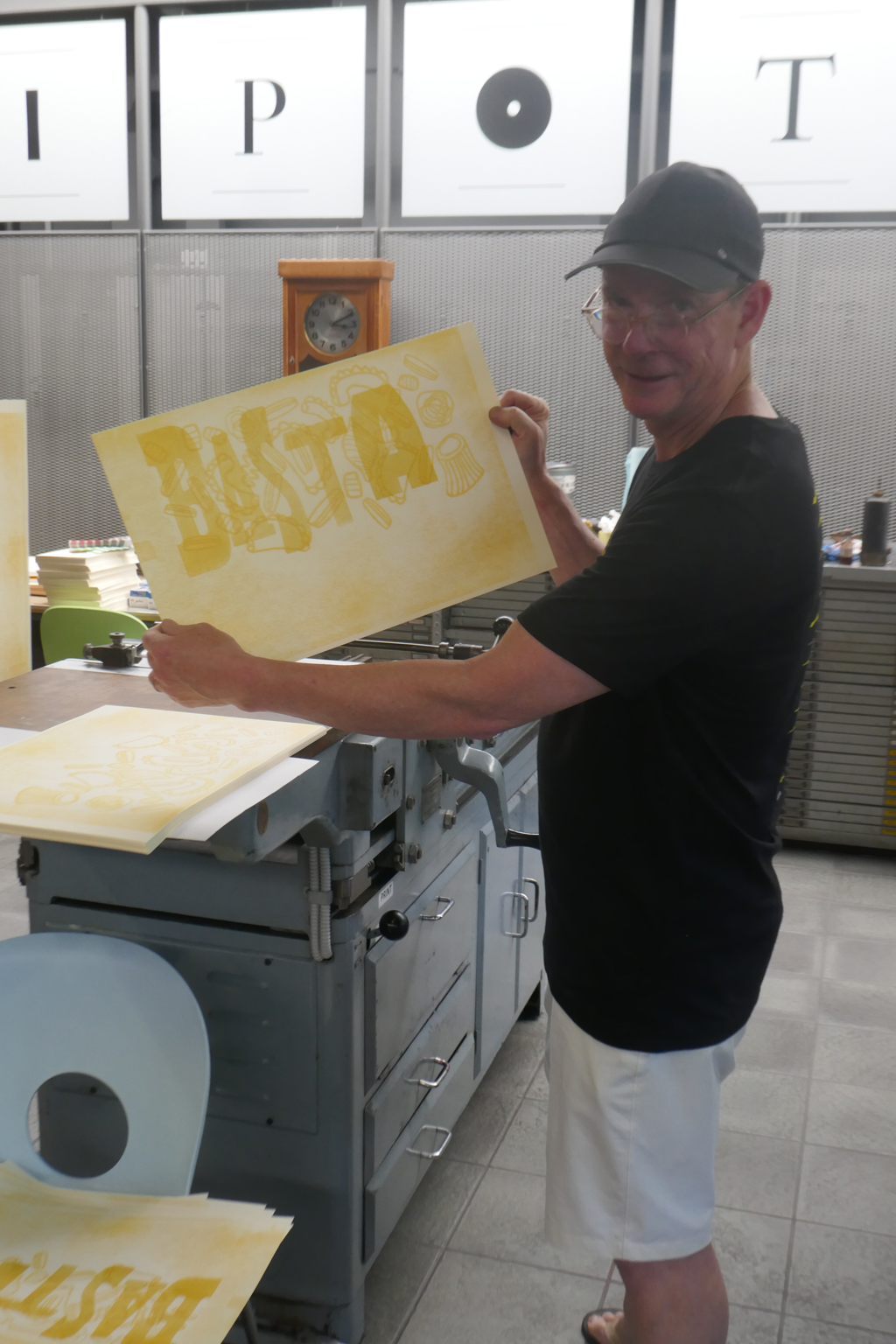 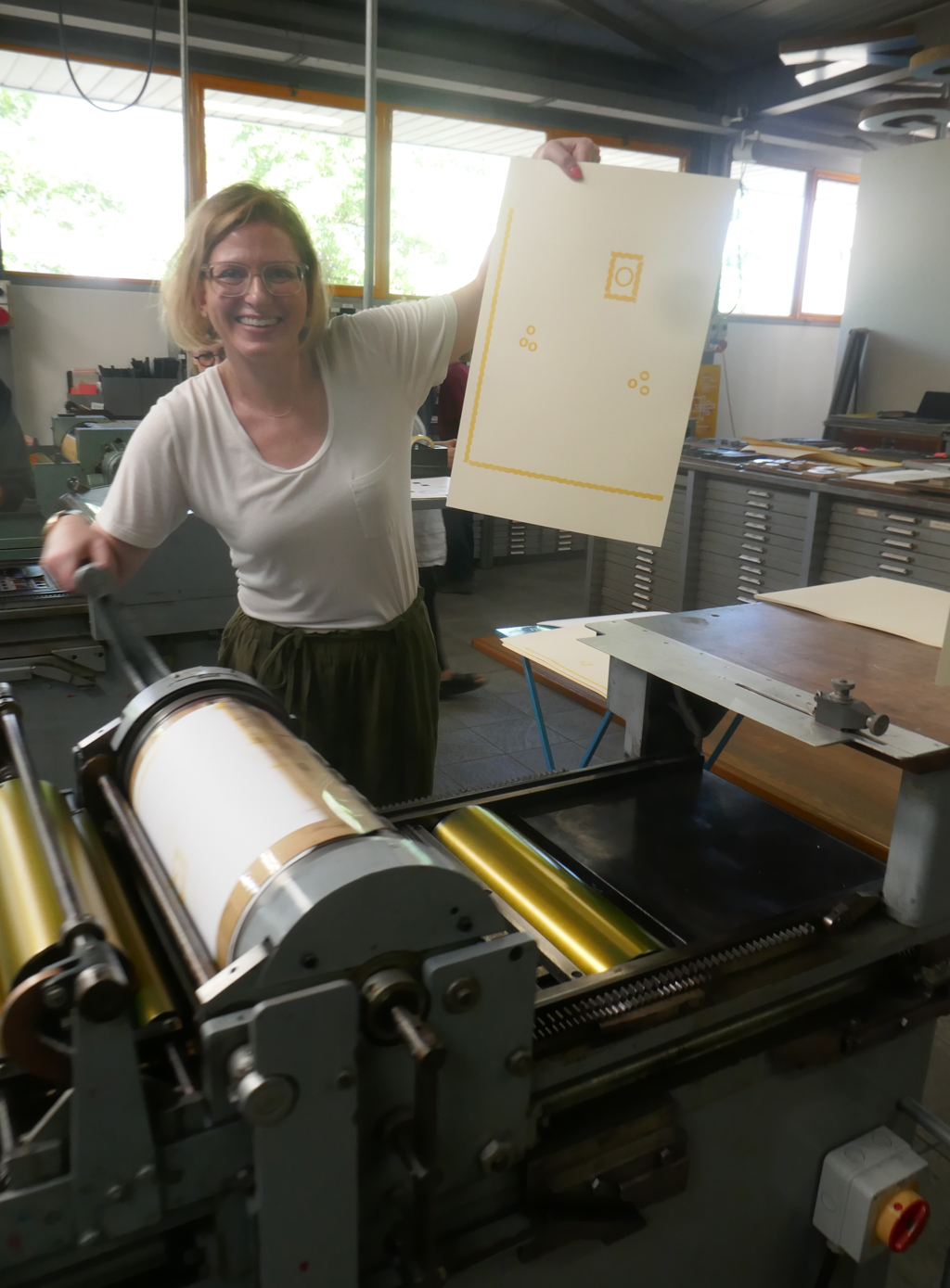 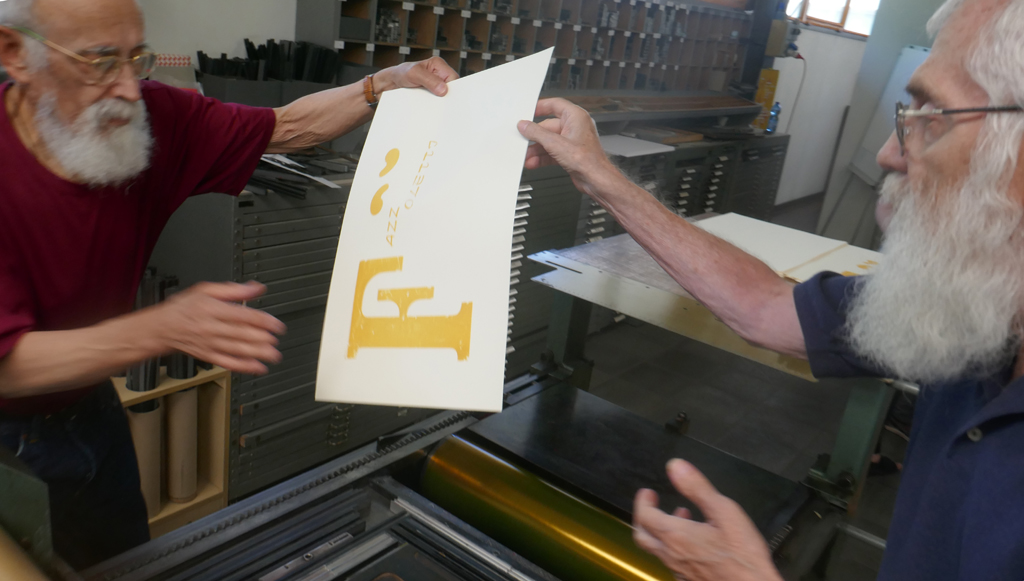 George Whitman (left) and Richard Waller (right) pulling a sheet. The F is the beginning of what will later be “Farafalle”. The commas at top suggest pasta shapes. 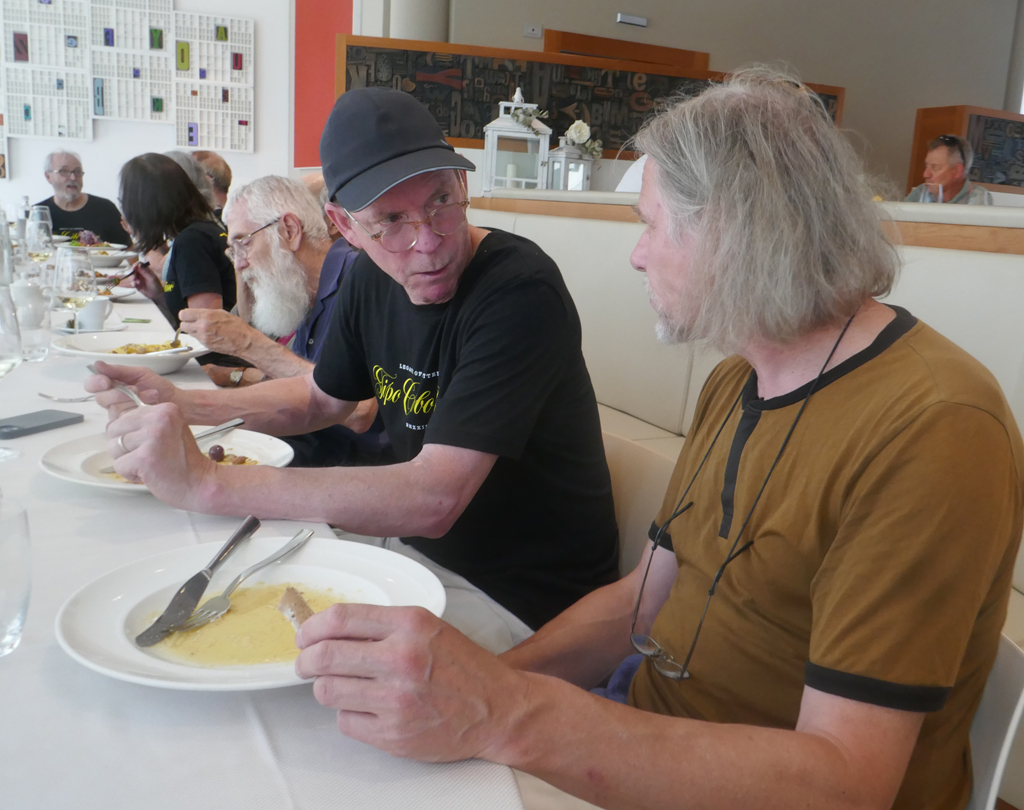 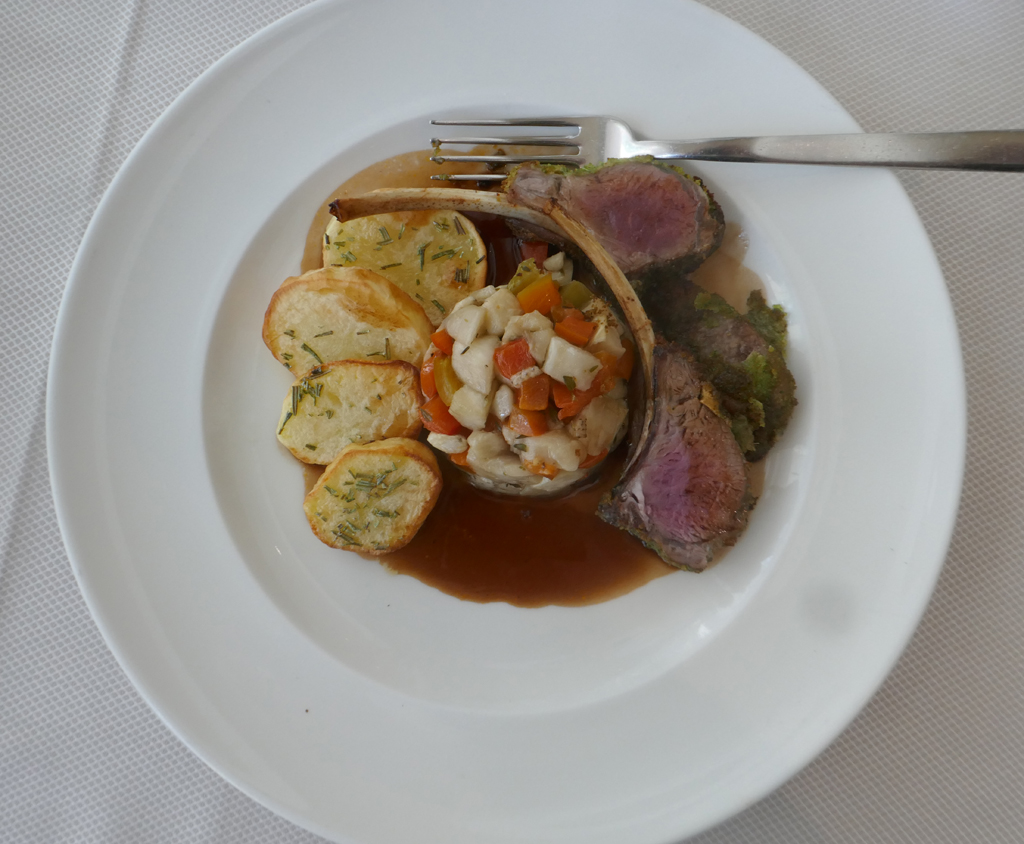 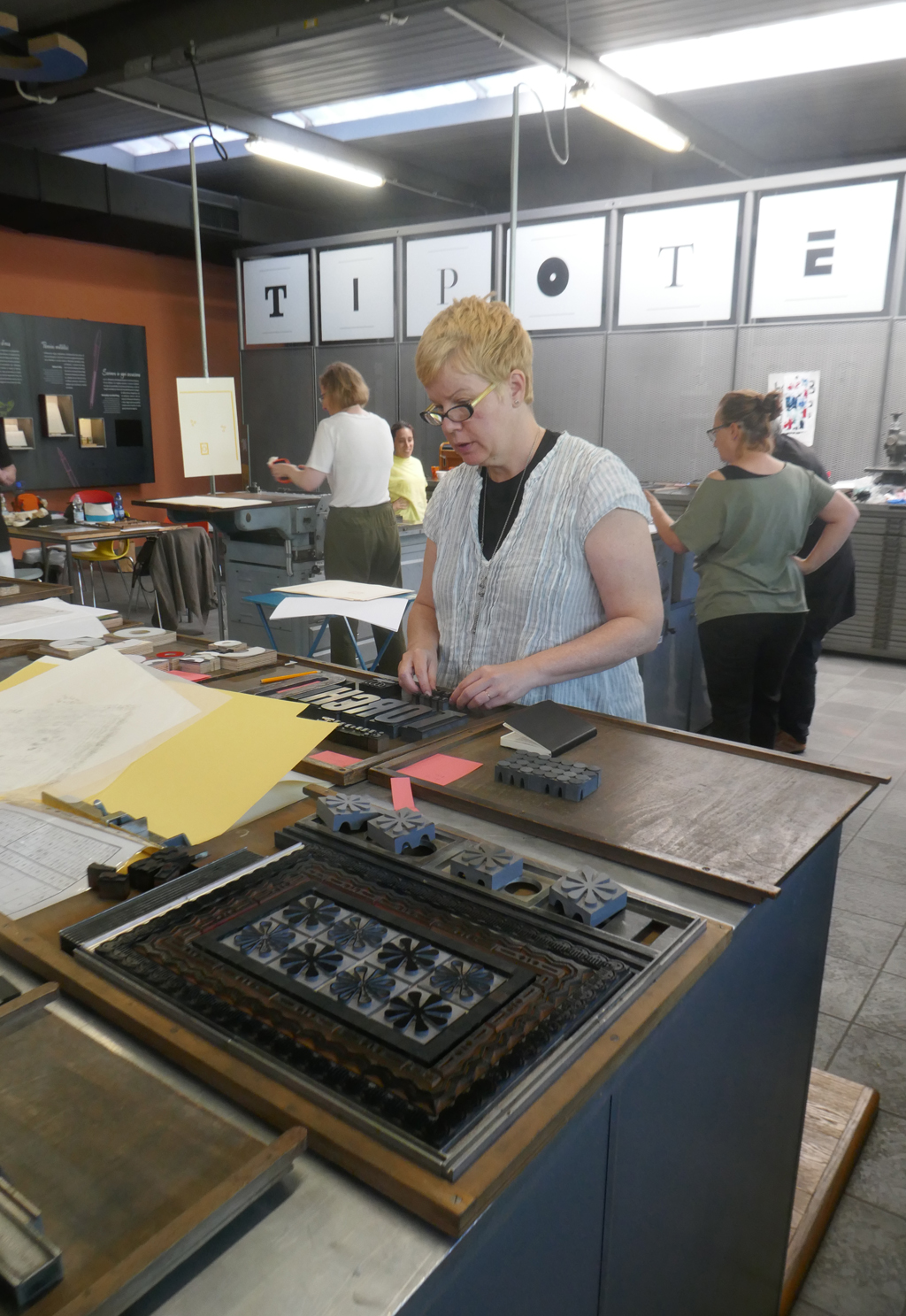 Anita Merk working on laying out “TORCHIO” for her spread, a type of pasta but also the Italian word for a handpress. In the foreground is the elaborate border, composed of wood and plastic ornaments, that Khoa Nguyen was patiently constructing. 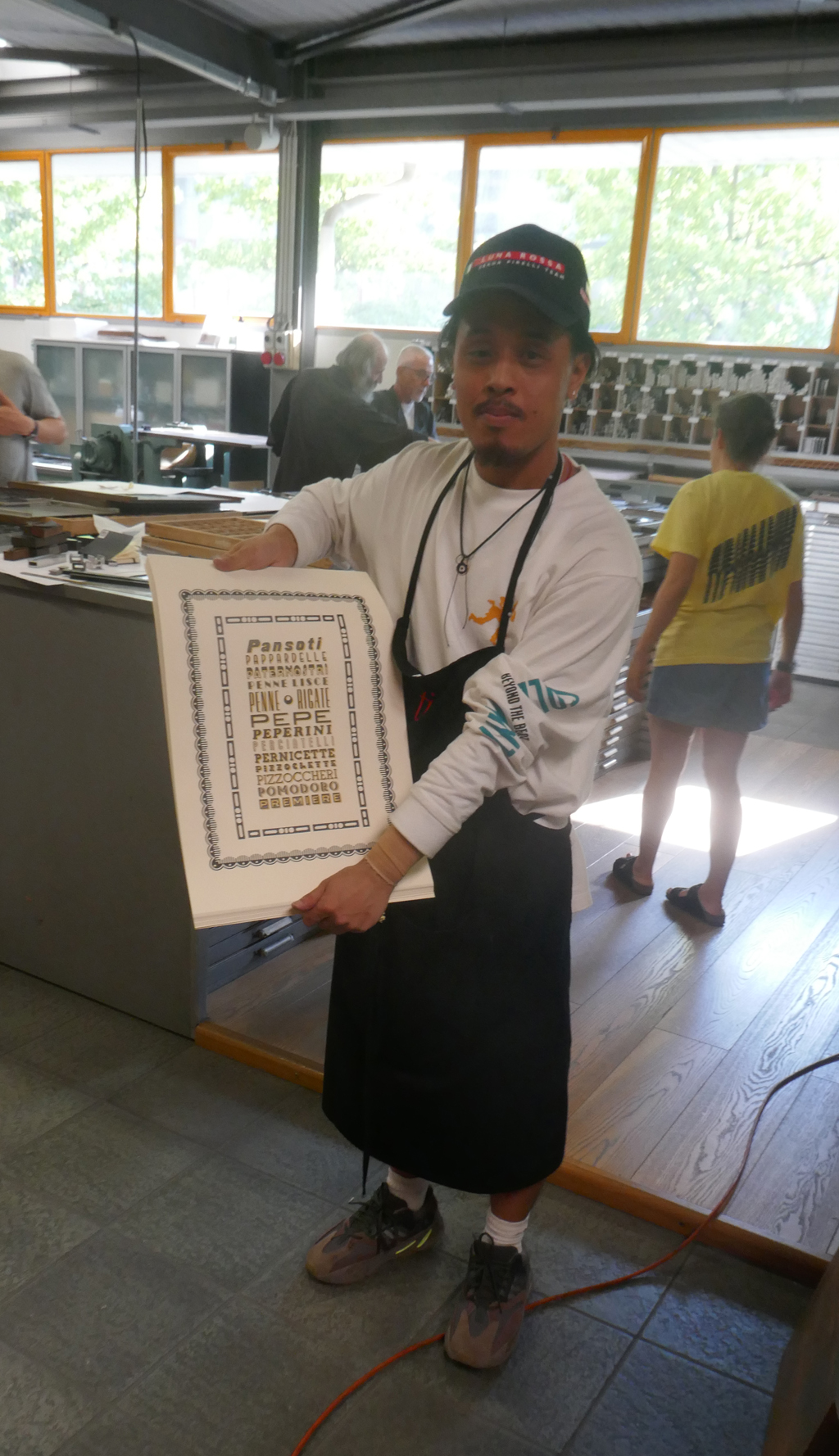 Khoa Nguyen proudly displaying the first two colors of his double-page spread. The white space between the borders will eventually be occupied as Khoa follows the 19th century philosophy of “more is more.” 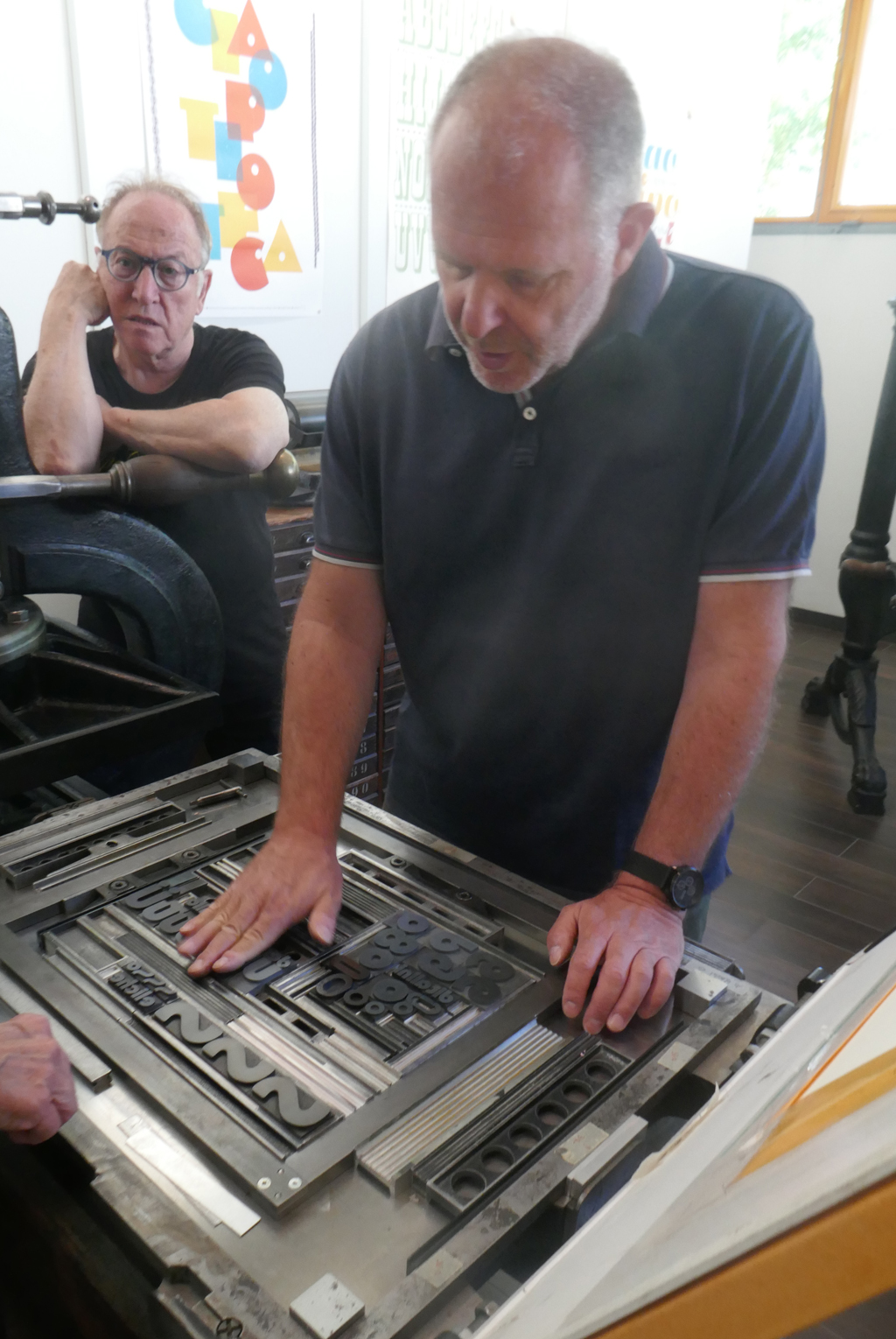 Henri-Paul Bronsard watching Sandro Berra as he makes sure that Claire Lukacs’ lock-up is tight. 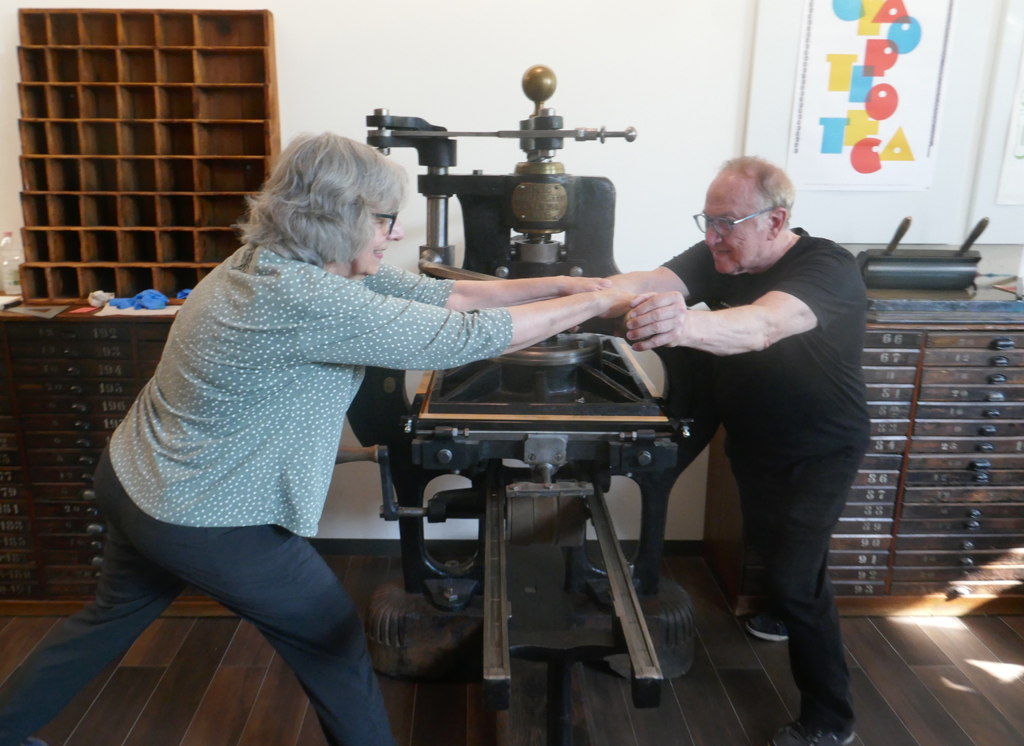 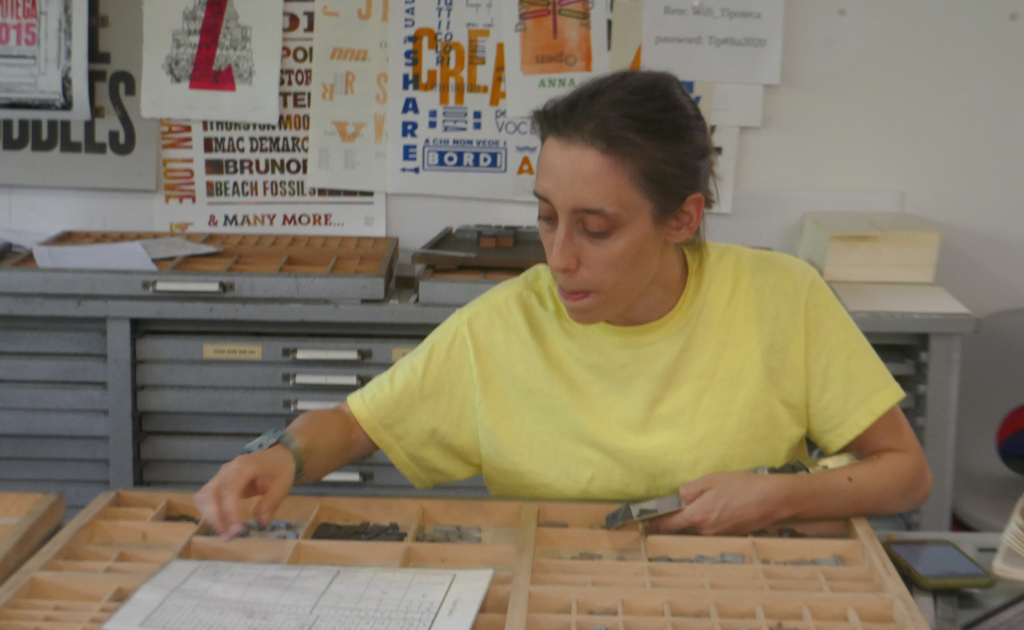 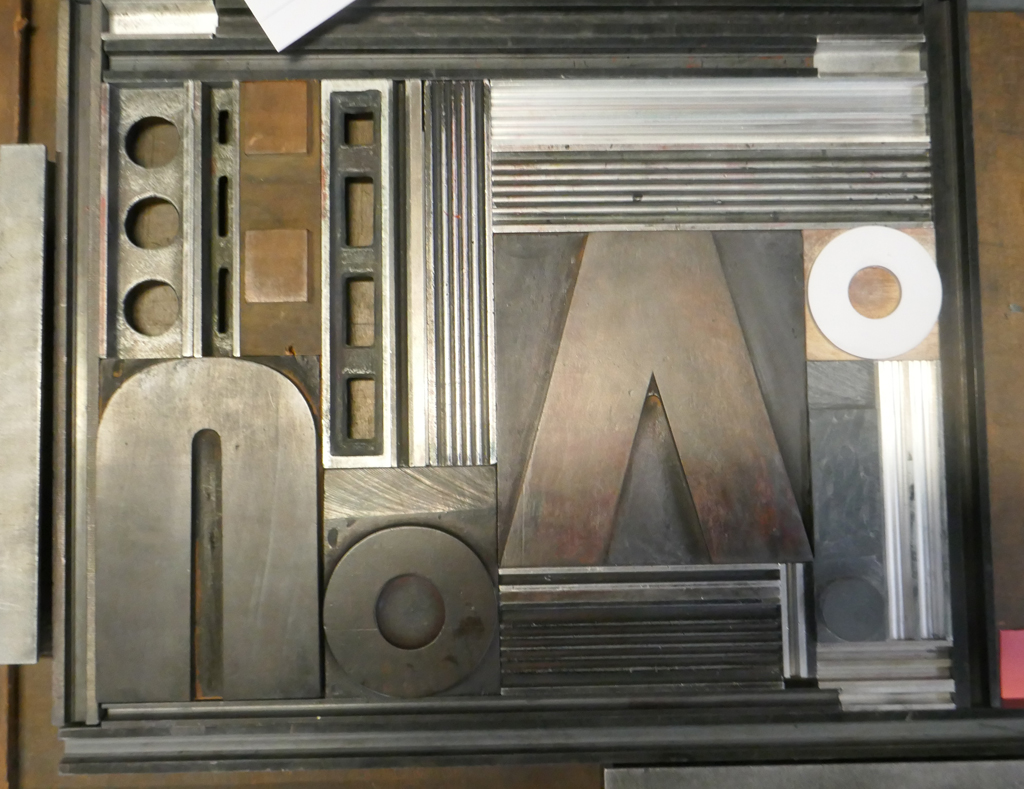 The lock-up of the red layer of Sonia Biancalani Levethan’s design. The large word says “UOVO” and is a reference to egg pasta. 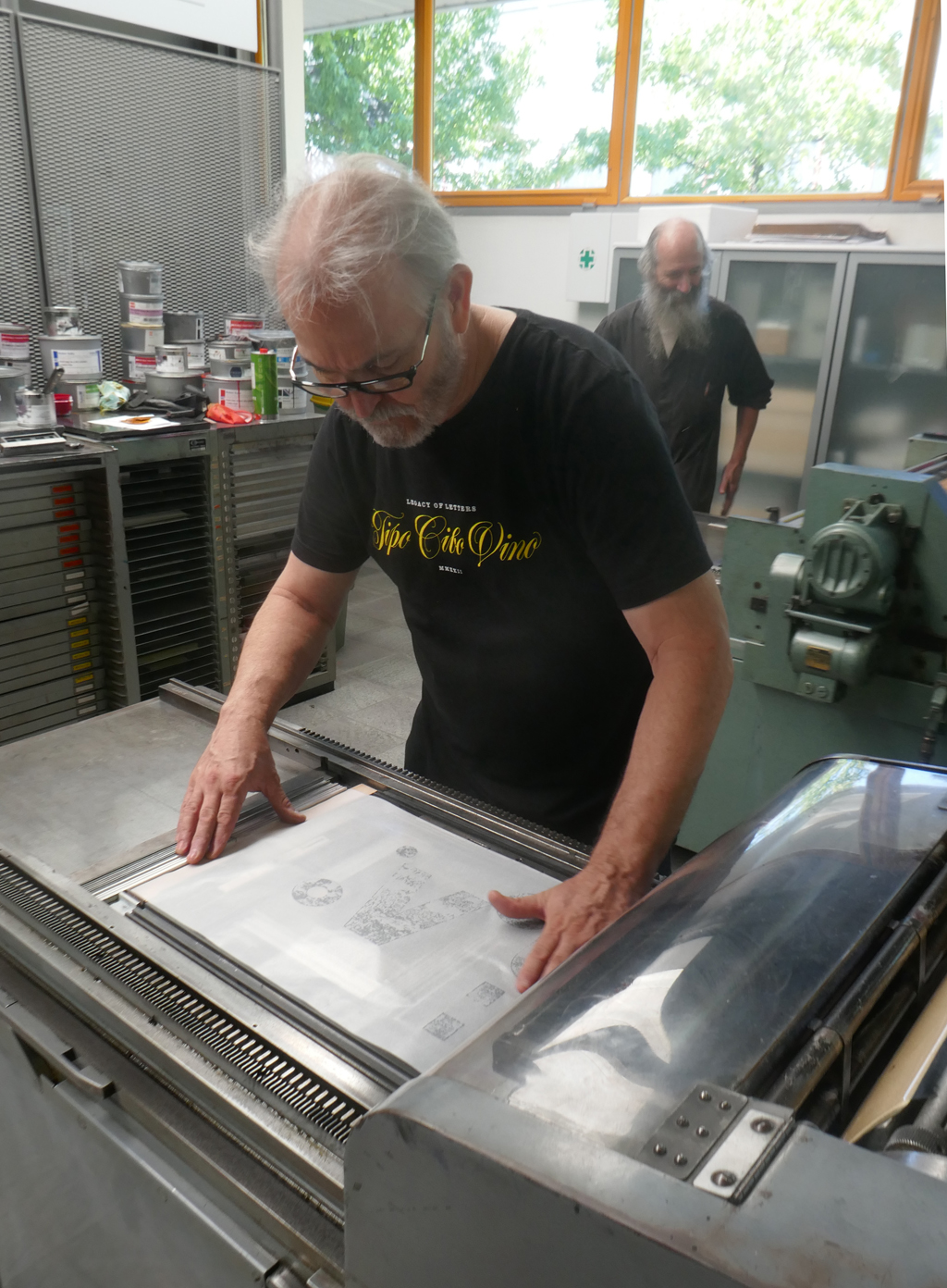 Peter Kruty testing the evenness of the height of the type in Sonia Biancalani Levethan’s design. 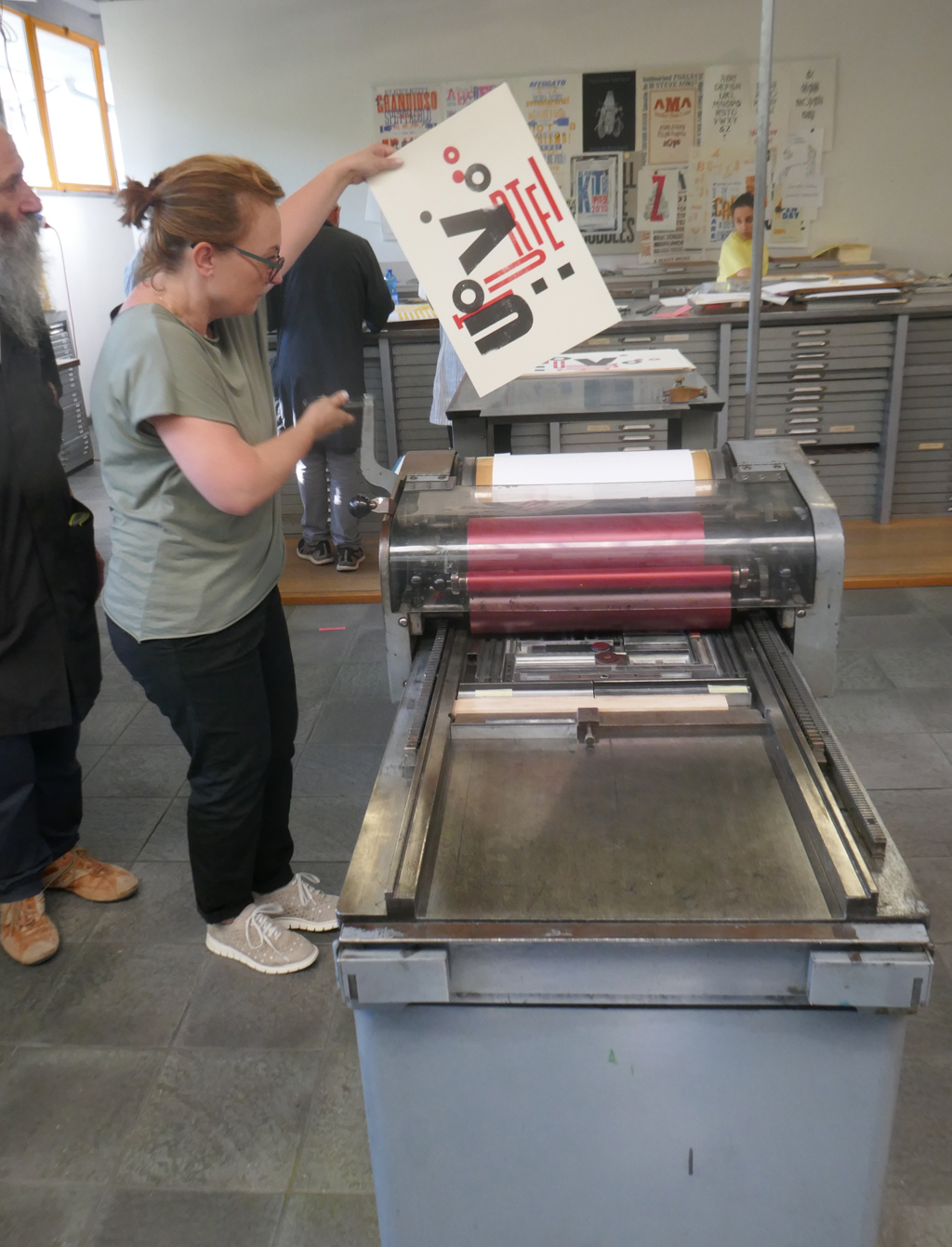 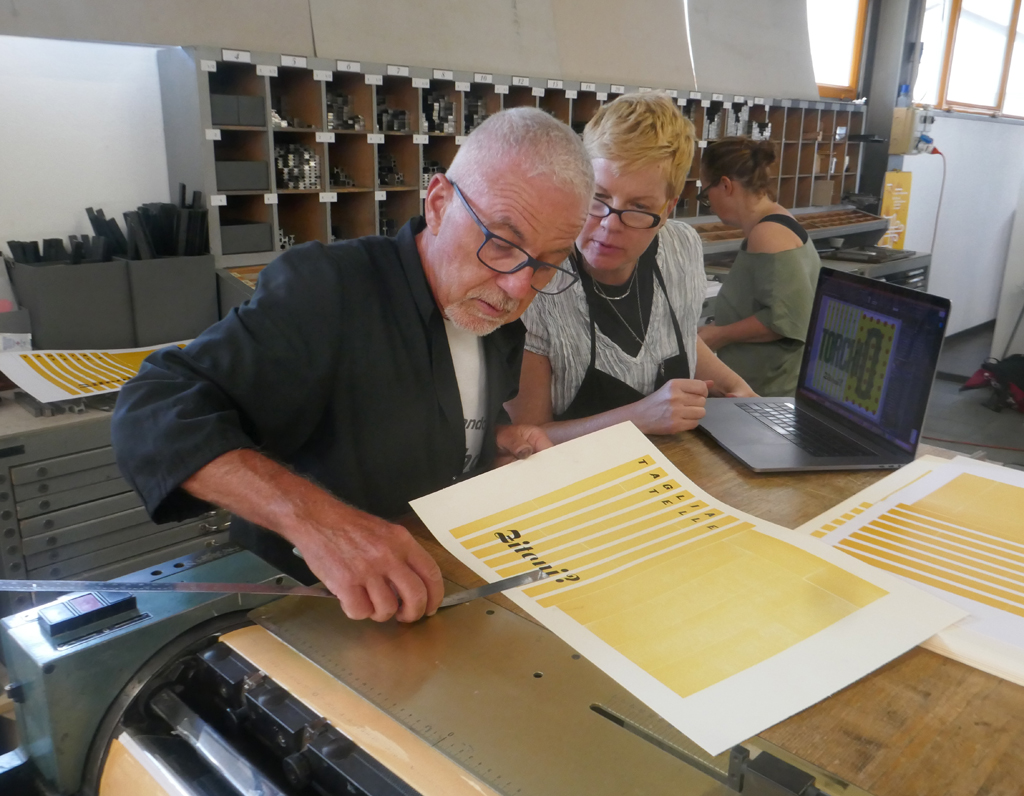 Lucio Botteselle helps Anita Merk with her registration. “Zitoni?” in her design is set in Fluidum by Alessandro Butti (Fonderia Nebiolo 1937). 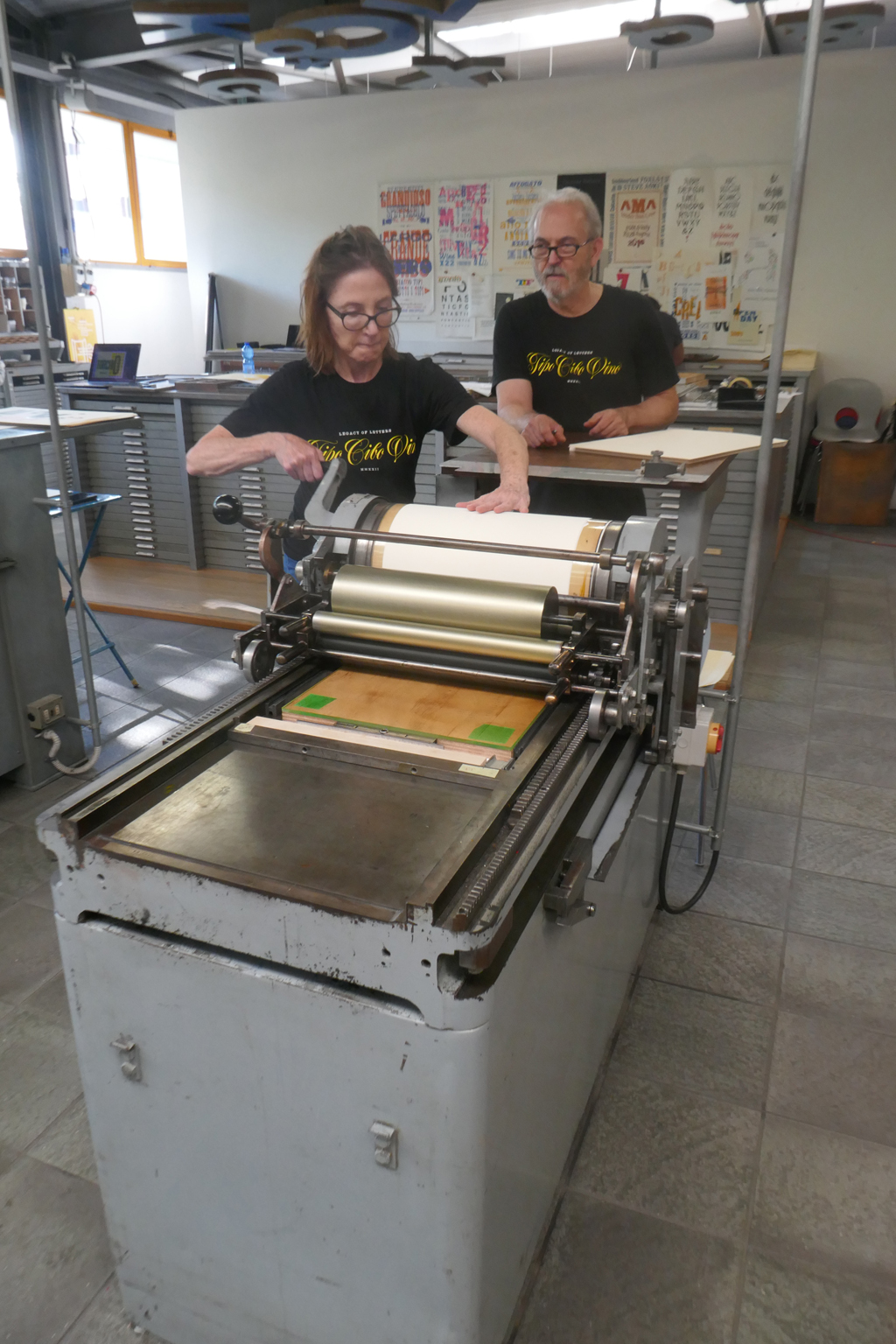 Peter Kruty assisting Patricia Childers as she begins printing the divider pages for the pasta book.

The end of the day.

When we quit for the day, several of us went to Ristorante Bragossa for dinner, a restaurant known for its seafood. It is located on Via Sant’Anna, about halfway between the Tipoteca and the Villa Bolzonello. We sat outside on the lawn. It was cool, but the mosquitos were a problem. The hostess thoughtfully provided bug spray for everyone. Given that half our group were riding bicycles, the bigger problem was a looming thunderstorm. The bike riders took off as soon as they had finished eating. Within a minute or so the heavy drops splashed down. The walkers—of which I was one—sat under the table umbrella, waiting for the rain to stop. But then the hostess told us that her son would give us a ride back to the Villa Bolzonello. Her son turned out to be the chef. He was still wearing his kitchen uniform (minus the toque) when he beckoned us into his SUV. We arrived at the Villa in no time, passing the bicyclists along the way. 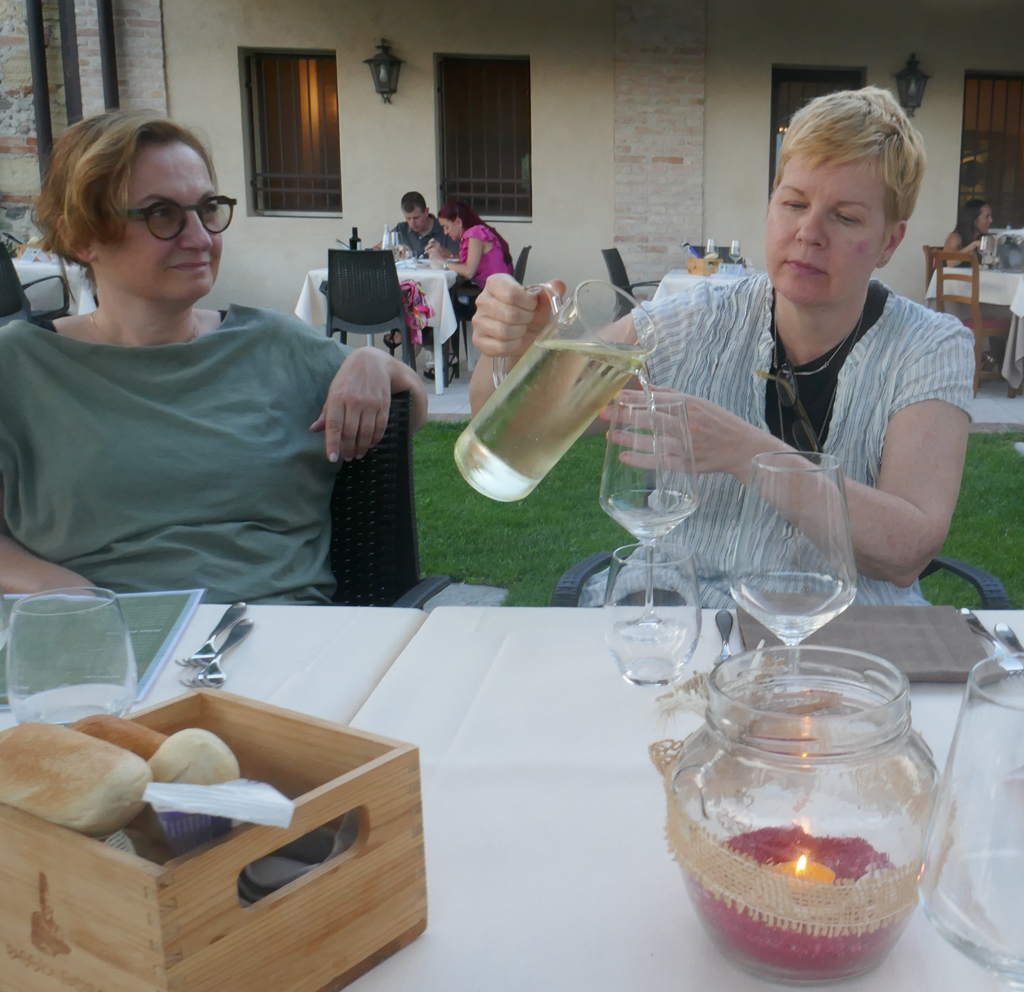 Sonia Biancalani Levethan and Anita Merk relaxing after a hard day’s printing—and before the rain arrived. 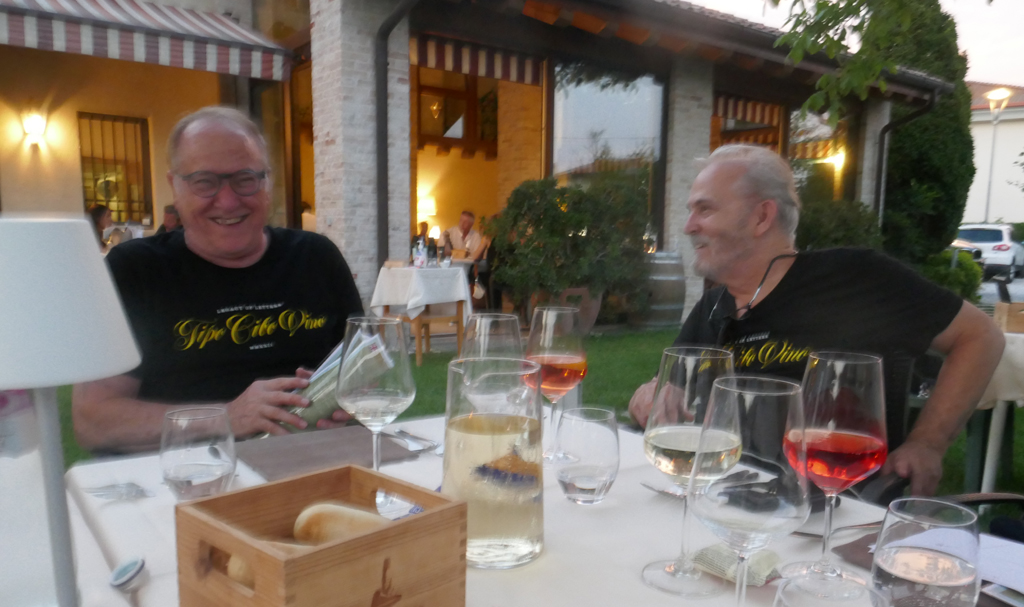