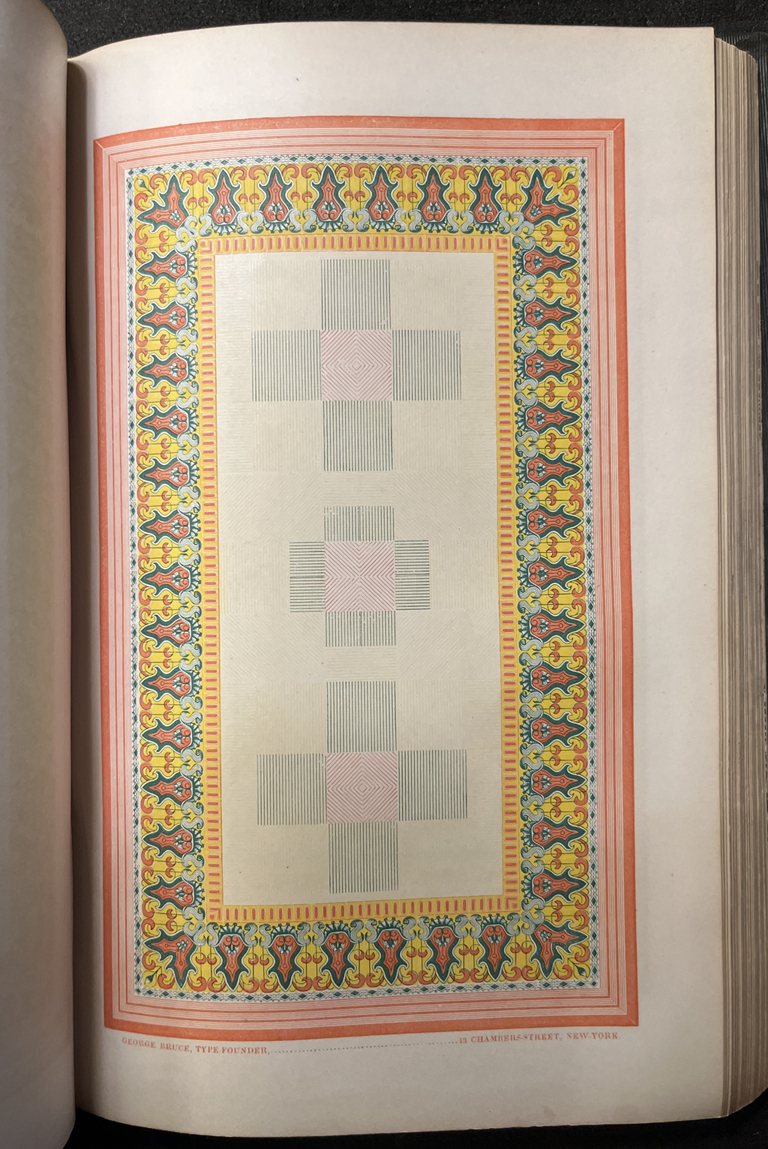 In early October I was at the Grolier Club in New York looking at a miscellany of type-related items in their collection: a birthday greeting to Margherita Bodoni in 1813; an 1827 book published by William Pickering “printed with the types of John Baskerville”; several publications issued by H.W. Caslon & Co. in the 1920s to celebrate the history of Caslon types; Justin Howes’ essay on his digitization of Caslon types; an 1850s Miller & Richards type specimen of “book and magazine founts”; the 1857 L. Johnson Foundry type specimen; a specimen book of wood type from Walker Bros. in London (much of it printed in vivid colors); specimen books from the French foundries Biesta, Laboulaye & Cie and Turlot; and enormous and colorful 1880s specimen from Julius Klinkhardt; the 1853, 1878 and 1882 George Bruce’s Son & Co. type specimens; and more.

I was enjoying the discovery of interesting and unusual things in these printed items (such as the shock of stumbling upon a color section at the back of the 1853 George Bruce specimen) and thought that it was a shame that I couldn’t share my excitement with other type enthusiasts. That was when I had the idea to create a letterforms study group in which a small number of people (10 max.) would gather at the Grolier Club (or another New York area institution) to look at actual examples of calligraphy, lettering, type, and typography. It would be an opportunity to share what I knew or had discovered; and also to learn from the knowledge of the other people in the group.

I floated the idea to several people I knew in the New York metropolitan area from The Society of Scribes, the Type Directors Club, School of Visual Arts, Parsons School of Design, the New York chapter of the American Printing History Association, the Typophiles, etc. and received a tremendously positive response. Due to complications the first session was not held at the Grolier Club as planned, but at the Herb Lubalin Center of Design and Typography at The Cooper Union. Curator Alex (Sasha) Tochilovsky graciously provided the meeting space and also helped me find relevant material in the Center’s collection.

The theme for the inaugural session of the Letterforms Study Group was wood type, au unusual choice for the Lubalin Center. It had been sparked by David Shields’ Zoom talk for CooperType on his magnificent new book about the Rob Roy Kelly Collection at the University of Texas. I made a list of wood type-related items for Alex to search for in the Lubalin Center’s holdings and I searched my own cluttered library for those they lacked. Although we did not locate everything on the list, we ended up with 25 books, portfolios, and booklets about wood type for the group to look at, as well as some original wood type provided by Peter Kruty, K.C. Witherell, and myself. (The list of items we examined are indicated by a red asterisk in the the bibliography below.) For the session I compiled a basic bibliography in wood type and related 19th century metal type. I also included a few websites focused on wood type and a list of some American and European wood type specimens that have been digitized and made available online.* 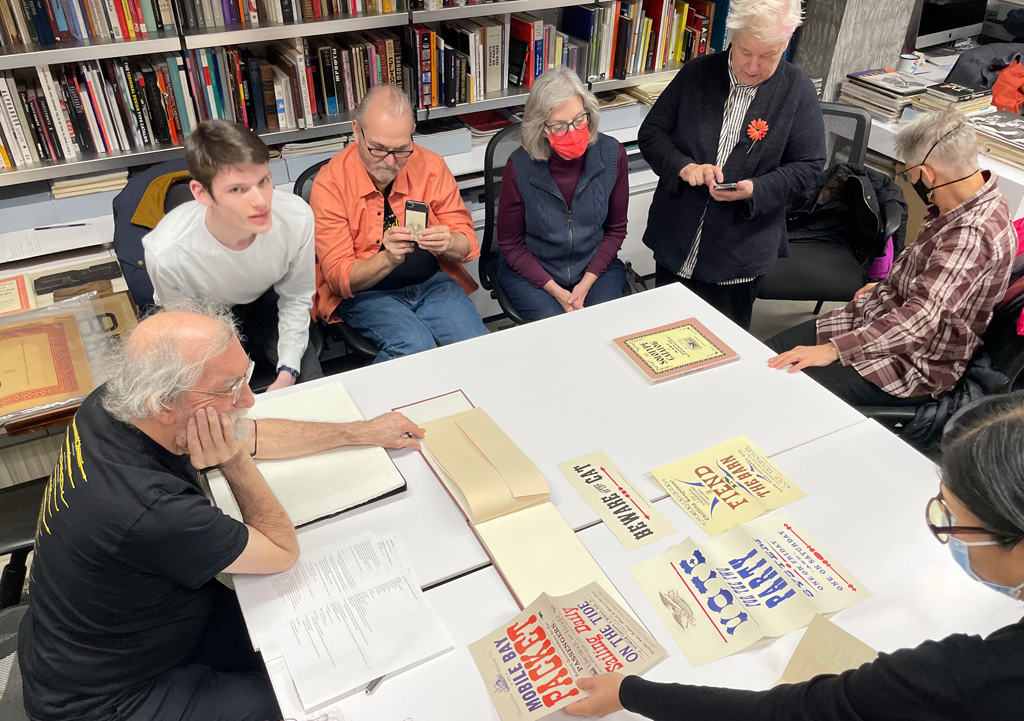 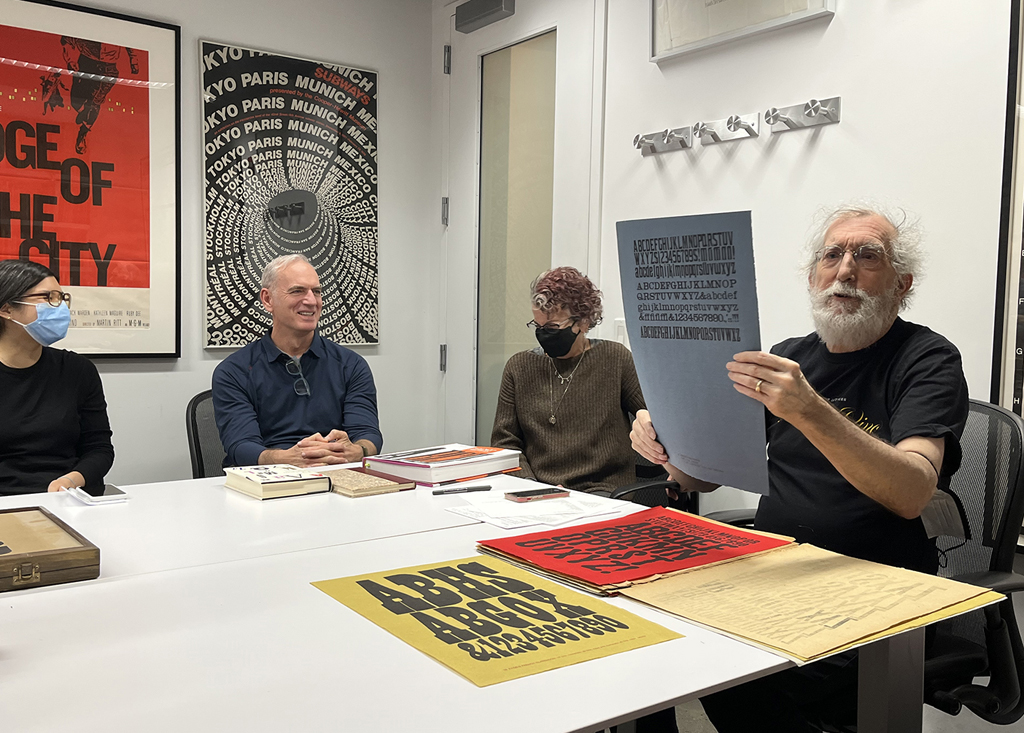 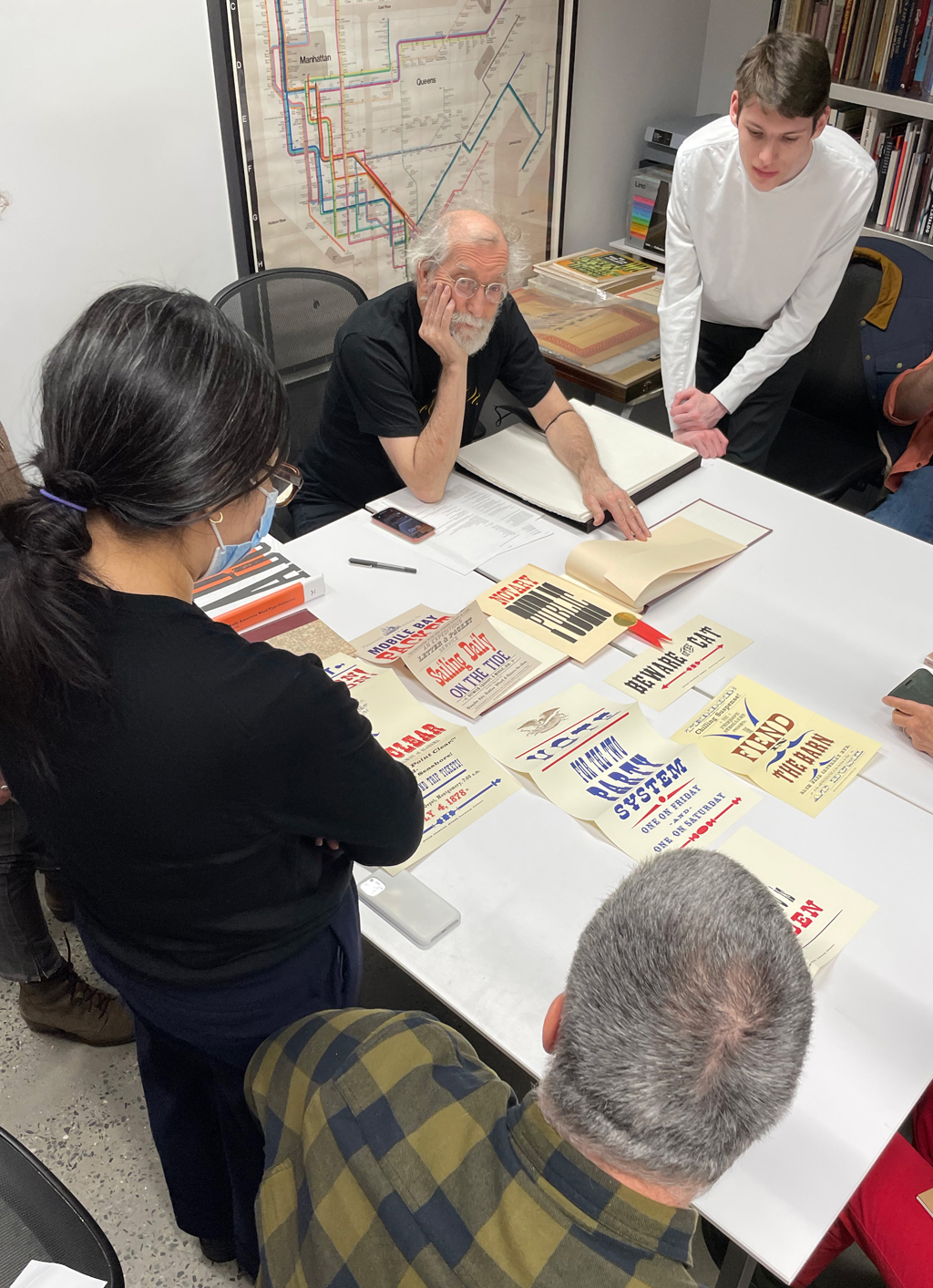 The group looking at pages and ephemera from Alphabets and Others by Walter B. Clement and Ian L. Roberson (Notasulga, Alabama: The Armstrong Press and Fairhope, Alabama: The Slow Loris Press, 1988). Counterclockwise: Greg D’Onofrio, Patricia Belen, Paul Shaw, and Sam Henri Gold. Photograph by Doug Clouse.

We had a fabulous session going through the material in a thematic and narrative manner, backward chronologically from the 1960s (a heyday of interest in wood type that coincided with Kelly’s research and preceded his magnum opus) to the 19th century. We started with catalogues of metal and wood type from the Morgan Press, moved to catalogues of their wood type that had been converted to phototype fonts by Headliners International and to ephemera from the Visual Graphics Corporation (VGC) that did the same thing with the metal and wood type collections of T.J. Lyons, then to books from other people such as Frederic Nelson Phillips and Dan X. Solo who offered typesetting from “old-fashioned” type. As a reminder that the 1960s are usually portrayed (inaccurately) as the heyday of Helvetica, Alex dug out a type specimen for Helvetica Plakate that offered the typeface in large sizes made from wood and plastic! 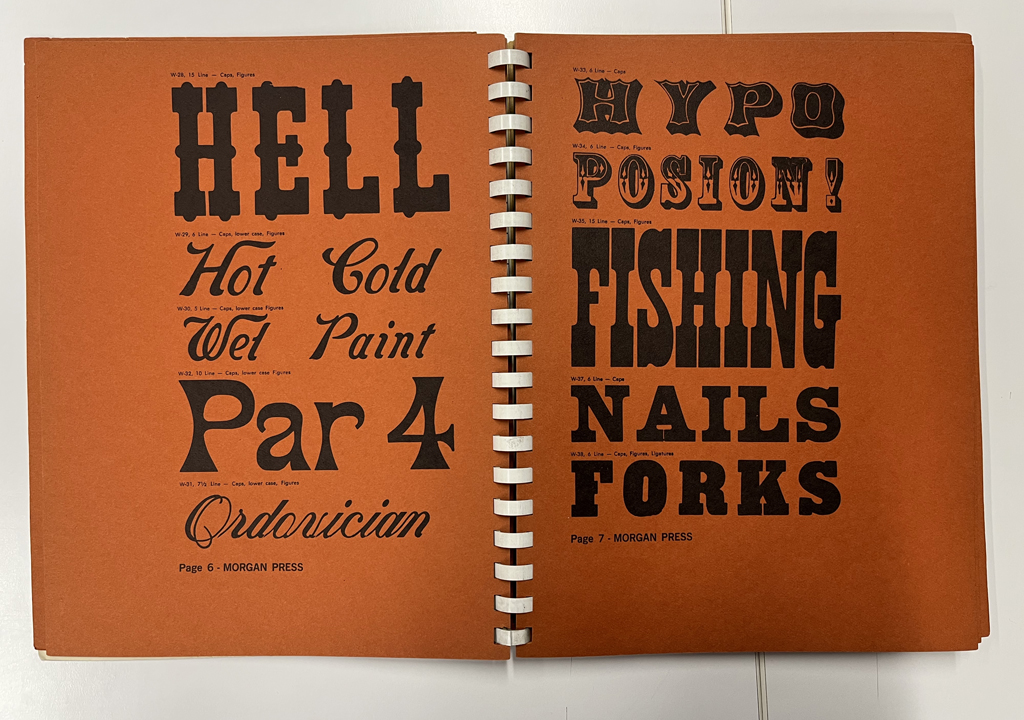 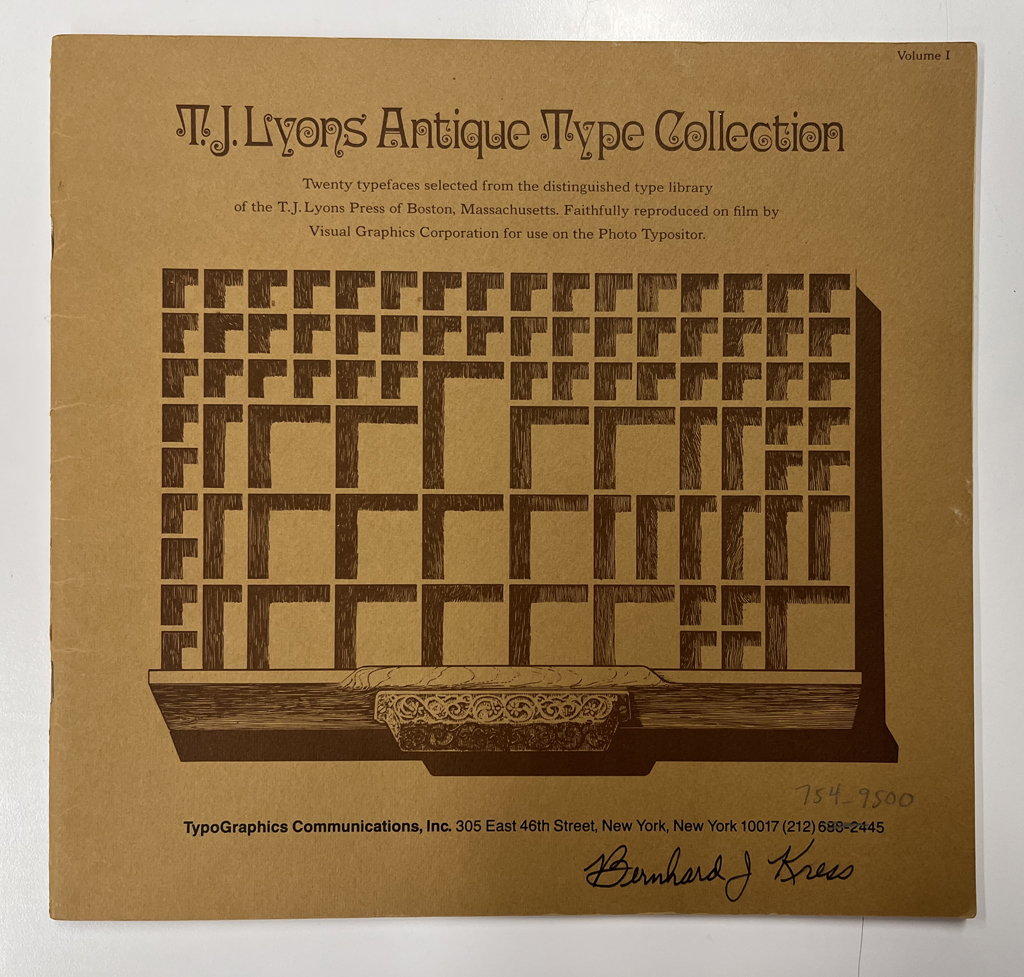 From there we finally began to look at the really exciting stuff: various portfolios of wood type from Alan Kitching’s Typography Workshop, The Armstrong Press and The Slow Loris Press jointly, the Angelica Press, and the Design Program at Indiana University. It was intriguing to see how different printers treated their wood type. Some allowed the cracks, chops, and other defects of the wood to be visible while others printed the types with heavy ink coverage to achieve perfect looking letters (possibly aided by some retouching?). The Indiana University portfolio was printed on a variety of papers, mainly Ingres and Japanese ones such as Moriki, but also one alphabet on wood veneer and one on Tea Chest Gold paper. This approach was similar to the two Morgan Press wood type catalogues, designed by John Alcorn of Push Pin, which showed off their types on a variety of colored papers. The combined wood type specimen book from The Armstrong Press and The Slow Loris Press, both located in Alabama, was notable for its oblong format and its mix of regular pages and short sheets. It was also printed in color. 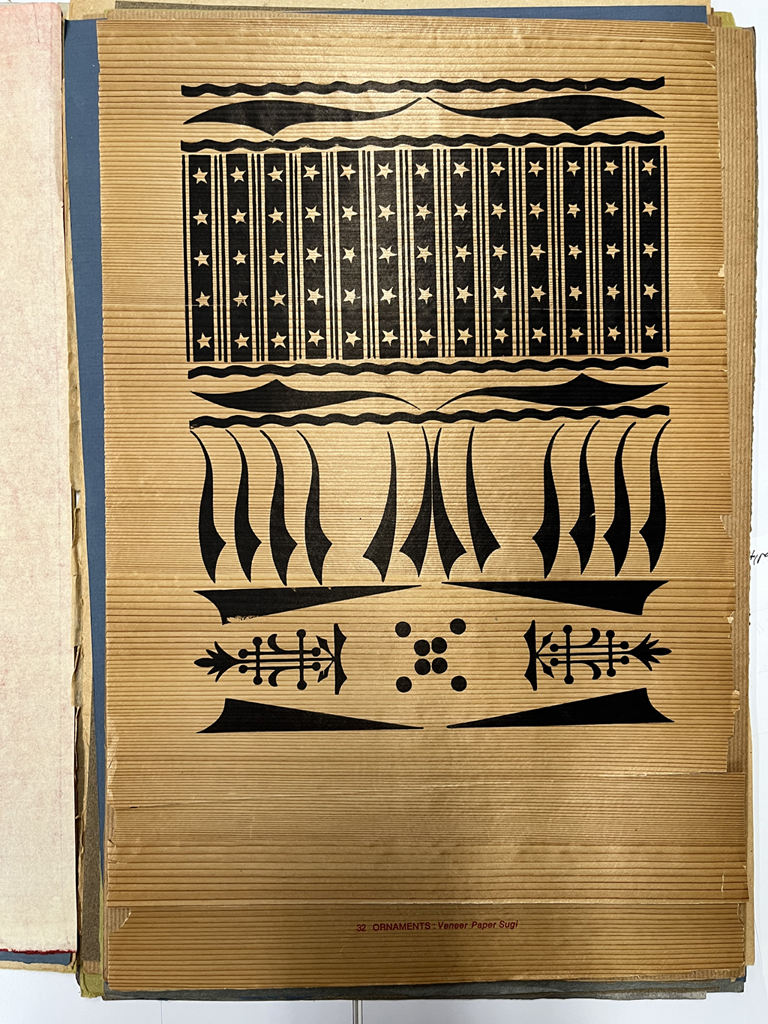 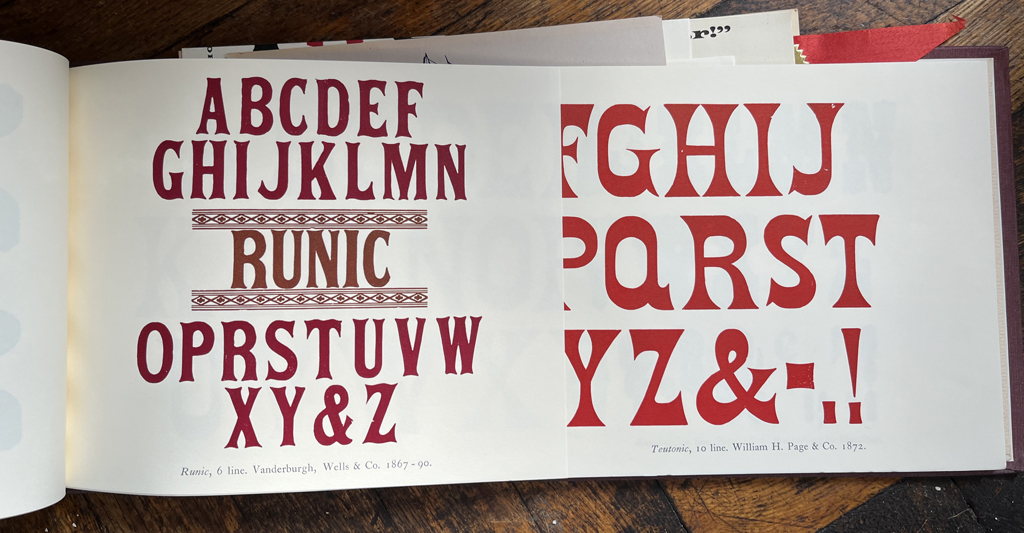 Spread from Alphabets and Others by Walter B. Clement and Ian L. Roberson (Notasulga, Alabama: The Armstrong Press and Fairhope, Alabama: The Slow Loris Press, 1988) showing a short sheet. The types are 6-line Runic at left on the short sheet and 10-line Teutonic at right on a regular sheet. From the collection of Paul Shaw.

After looking at these various portfolios we finally looked at some of the publications Rob Roy Kelly had produced as he was researching wood type prior to writing American Wood Type: 1828–1900, including the seminal issue of Design Quarterly and a truncated copy of his 1964 portfolio. The Lubalin Center’s copy of the latter contains all of the introductory matter but only three of the specimen plates. 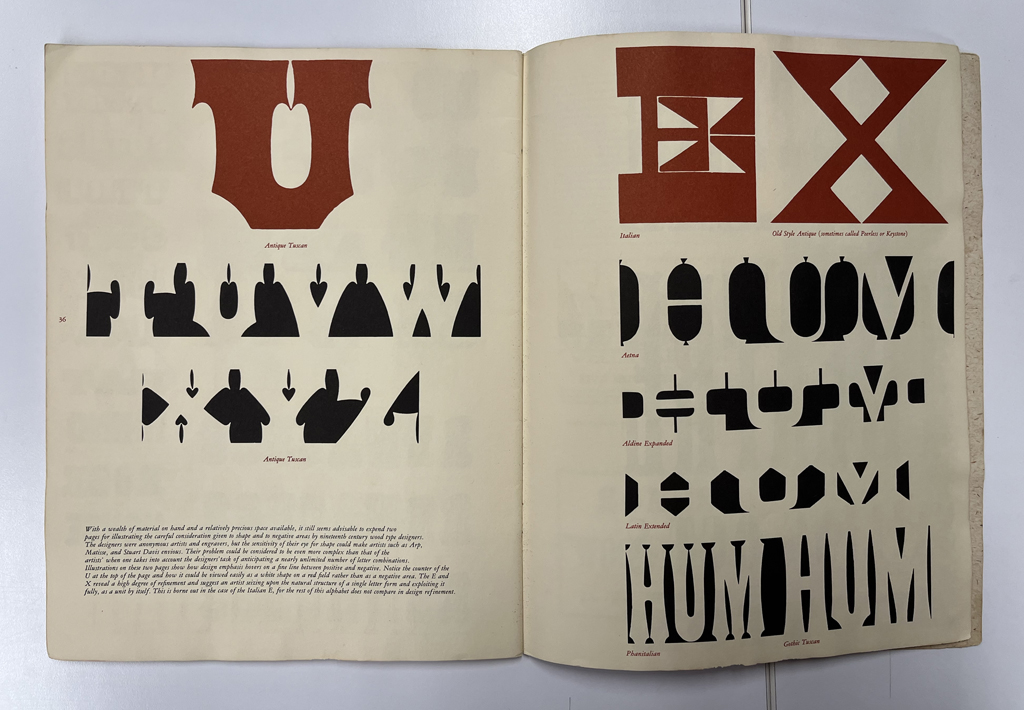 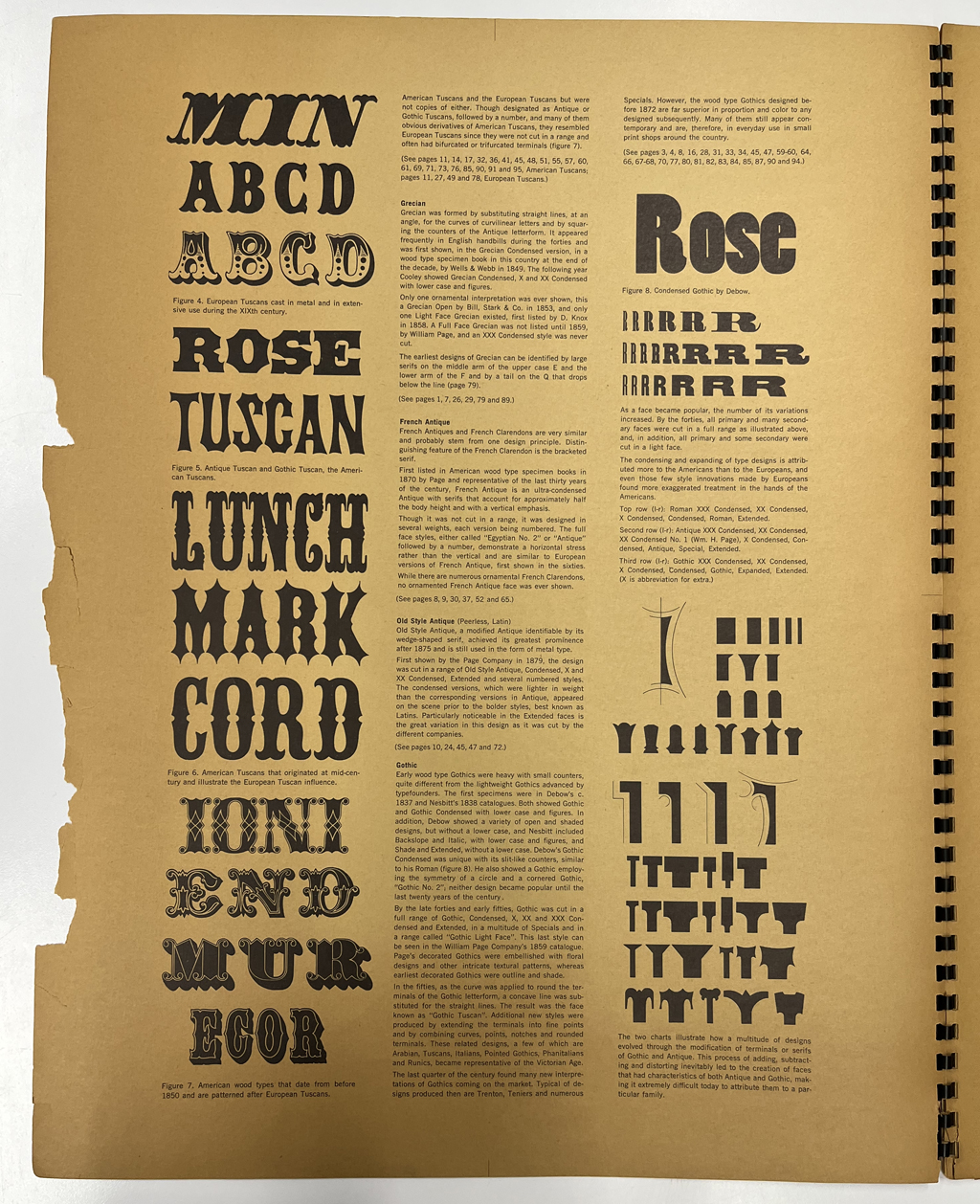 Page from a truncated copy of the portfolio American Wood Type: 1828–1900 vol. 1 by Rob Roy Kelly (Kansas City: 1964). From the Lubalin Center collection.

As members of the group contributed their knowledge and opinions about the various items, we made links between wood type and psychedelia (see some of the posters of Victor Moscoso), the Push Pin studio, Herb Lubalin, Corita Kent, phototype, and more. We discussed why wood type was still being used in the 1960s, the ethics of retouching of wood type specimens, methods of printing wood type, how to identify wood type designs, the beauty of the counterforms in some type types (especially the wide Latins), designing with wood type, collecting wood type, and protecting and conserving wood type.

Appropriately, we ended the study session with a look at a mix of actual wood type, most of it provided by Peter Kruty, including a few letters of my own digital typeface Kolo Narrow that Virgin Wood Type converted to wood several years ago. I contributed two pieces of wood type, a large S and an ampersand with a spiky tail that was a condensed version of a type we had seen earlier in Shields’ book. Peter’s wood type letters included some sloped romans cut on a slant and two letters that had been hand “kerned” (i.e. with chunks cut out to make a tight letterfit possible) by former owners. 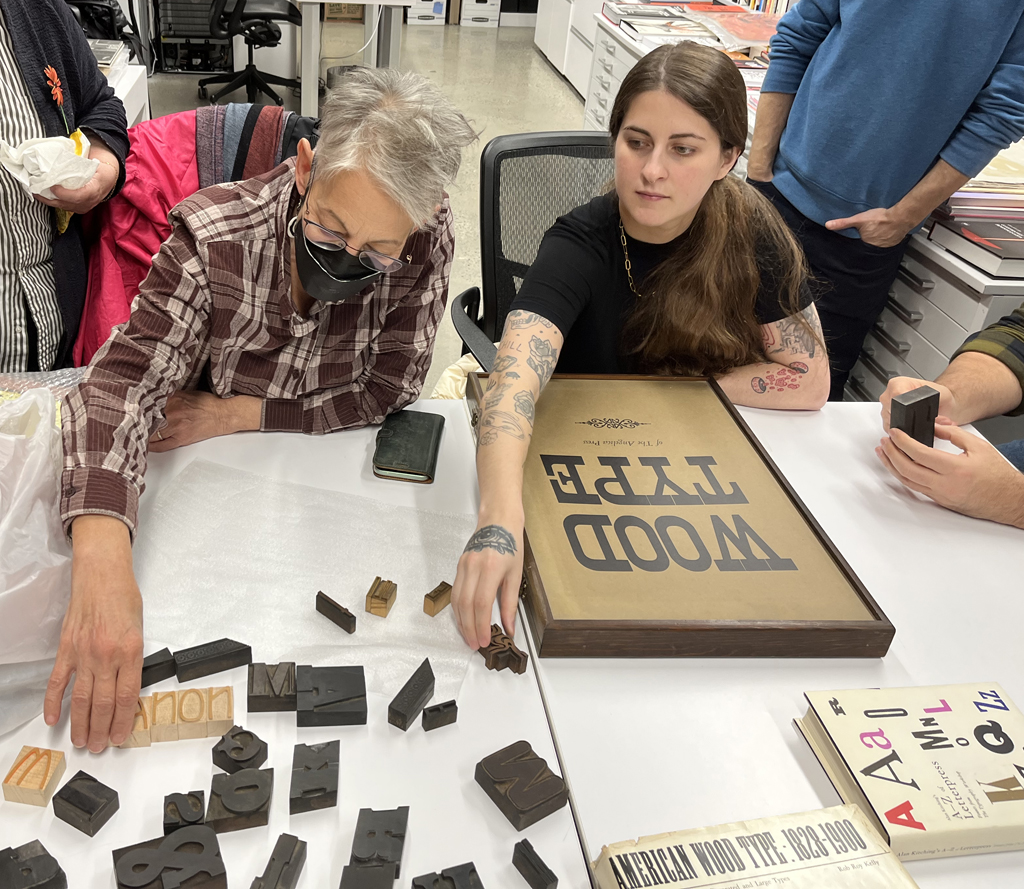 The group looking at wood type. From left to right: Abby Goldstein and Barbara Cadorna. Alex Tochilovsky is in the blue sweater. The light-colored wood type is Kolo Narrow by Paul Shaw (Virgin Wood Type). The wooden box in front of Barbara contains the portfolio Wood Type of the Angelica Press by Dennis J. Grastorf (Brooklyn: Angelica Press, 1975). From the collection of Paul Shaw. 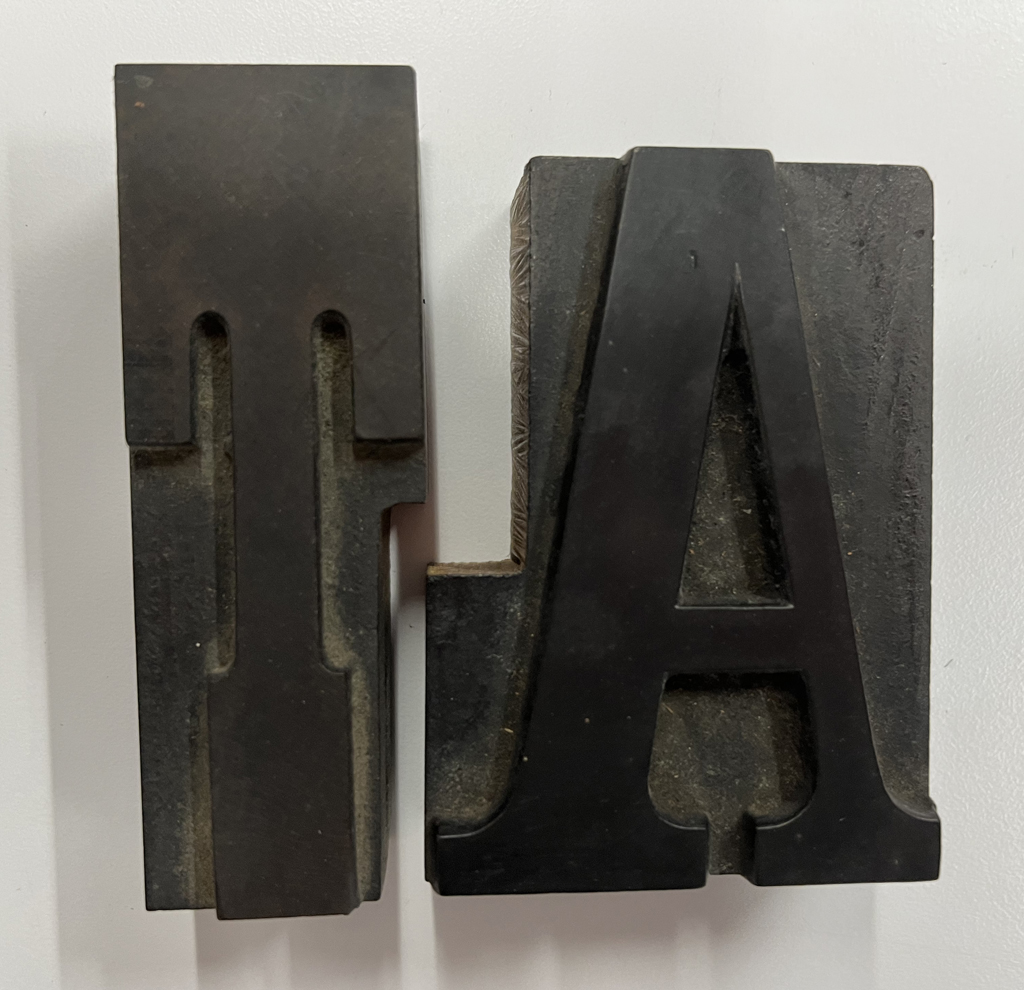 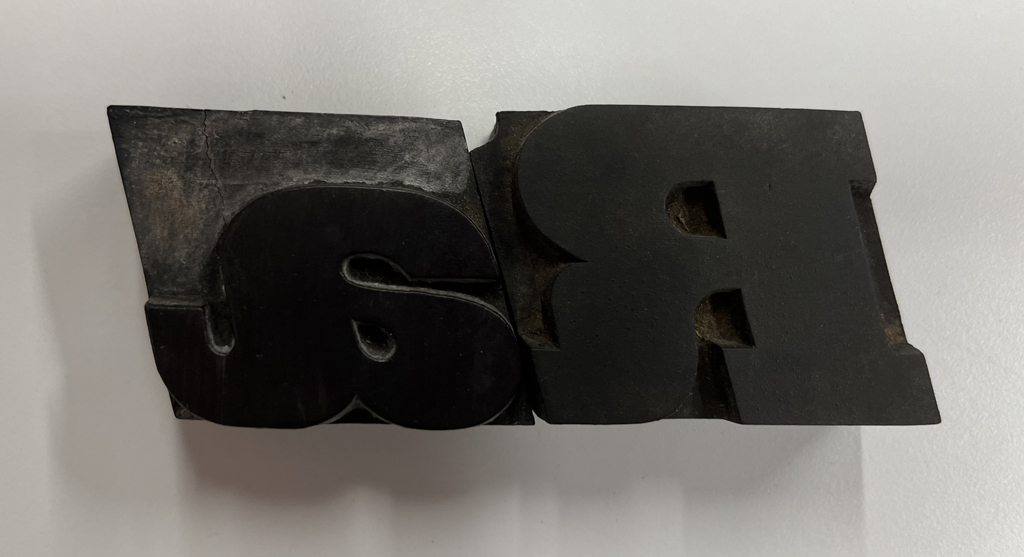 The Fat and the Lean: American Wood Type in the 19th Century
Elizabeth M. Harris
Washington, DC: National Museum of American History/Smithsonian, 1983
[catalogue of an exhibition]

Alphabets and Others*
Walter B. Clement and Ian L. Roberson
Notasulga, Alabama: The Armstrong Press and Fairhope, Alabama: The Slow Loris Press, 1988
[specimen book with inserts]

Jeremiaadatte
a short comparison of the facsimile of the 1874 Specimens of Chromatic Wood Type, Borders, &c. by William H. Page to the original edition