This is the fifth installment of a day-by-day visual account of Tipo Cibo Vino 2022. (All photographs, unless otherwise indicated, are by me and are copyright Legacy of Letters.)

This was our last day in Emilia-Romagna. In the morning we took a train from Parma to Modena where we spent the morning looking at manuscripts and books in the Biblioteca Estense. The highlights were two diametrically opposed items: the Silloge of Giovanni Marcanova (Ms. lat. 992 [a 5.15]), illustrated and decorated by Felice Feliciano (and probably written out by an atelier of copyists under his guidance), and the Lit0-Latta edition of Parole in Libertà: Futuriste Olfattive Tattili-Termiche by F.T. Marinetti and Tullio d’Albisola (1932). The latter, designed by d’Albisola, is famous for being entirely printed lithographically on tin. We also saw an example of micro-calligraphy by an anonymous scribe that included several examples of trembling or broken letters.

The Biblioteca Estense is part of a complex in Modena that includes the Museo Lapidario Estense, a collection of Ancient Roman inscriptions from the region. Unfortunately we did not have time to carefully view the stones, several of which are recorded in Marcanova’s Silloge. Instead we dispersed for lunch before our afternoon appointments. Patricia Childers, Peter Kruty, Sayre Gaydos, Erica Carras, and I ate at Oyster Barba, a seafood restaurant on the outskirts of Modena. 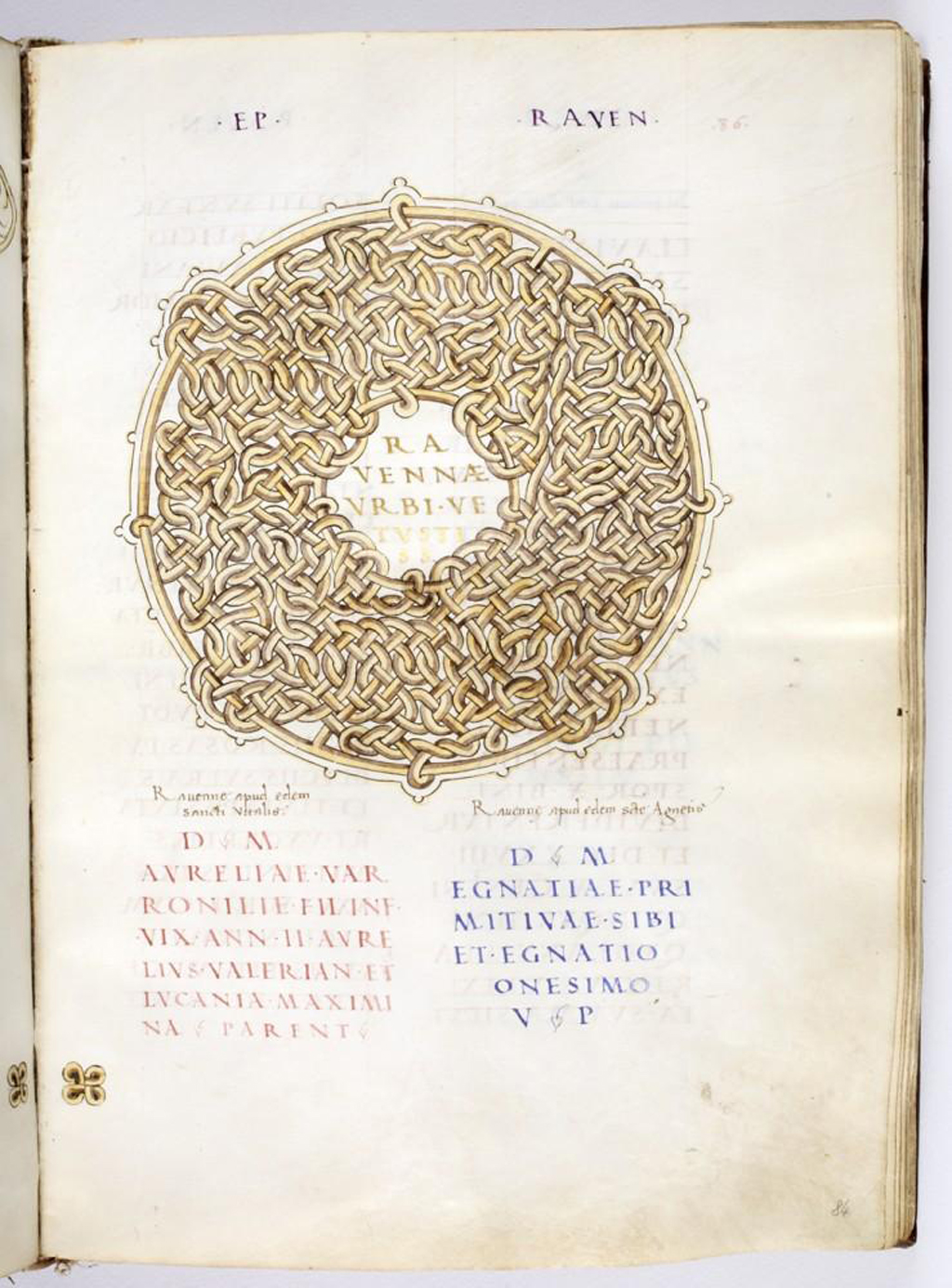 “Ravenna” page from the Silloge of Giovanni Marcanova (Biblioteca Estense, Ms. lat. 992 [a.5.15]) designed and partially written out by Felice Feliciano in 1465. 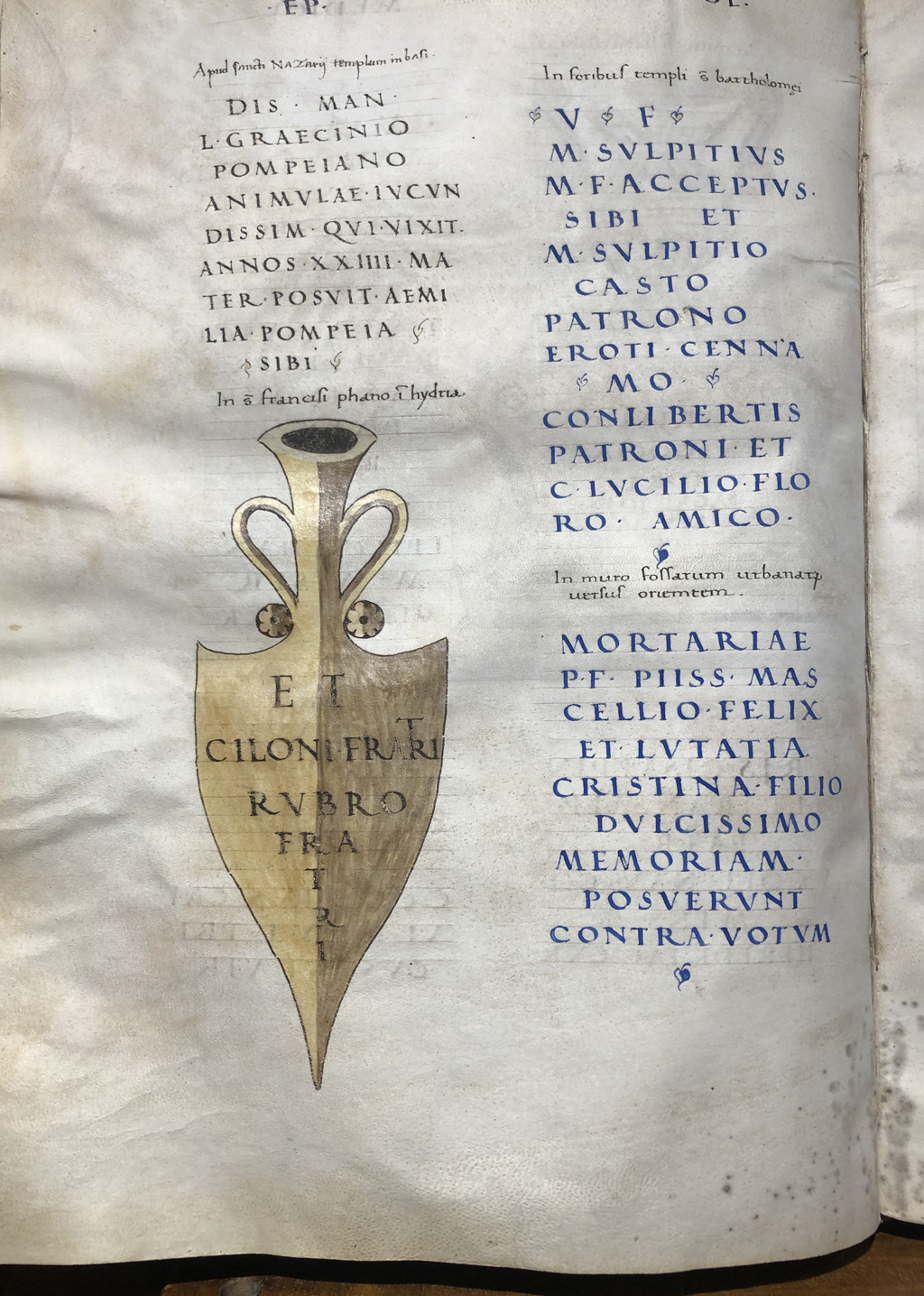 Detail of a page from the Silloge of Giovanni Marcanova (Biblioteca Estense, Ms. lat. 992 [a.5.15]) designed and partially written out by Felice Feliciano in 1465. Photograph by Erica Carras. 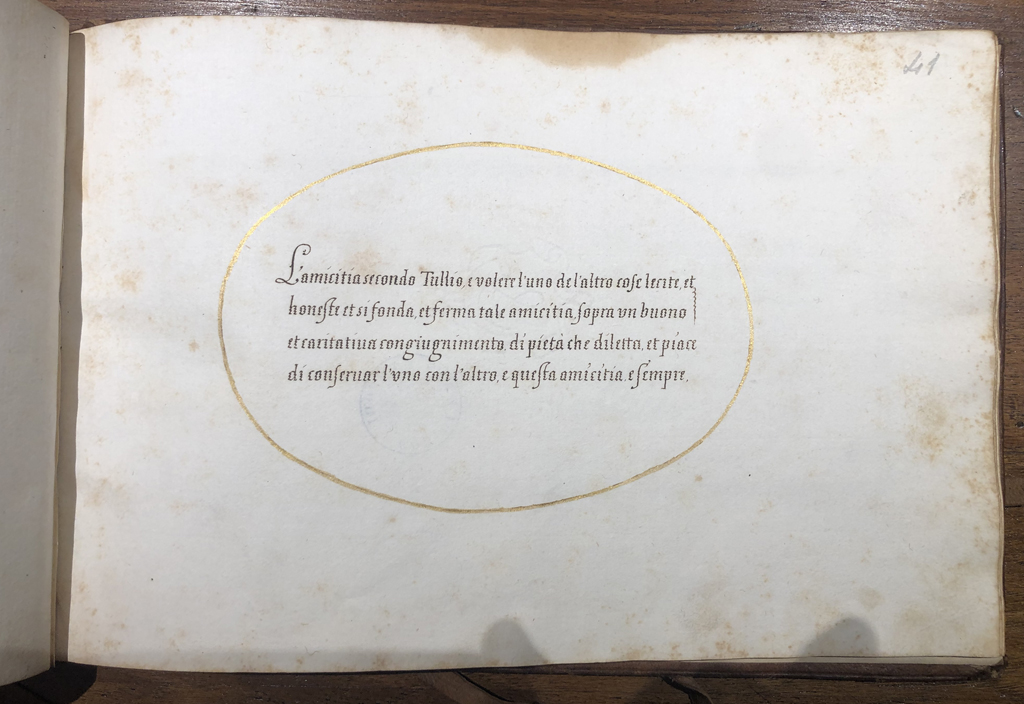 Lettera rognosa (trembling letters) from a manuscript of micro-calligraphy by an unknown scribe (Biblioteca Estense, gamma.1.10.18). Photograph by Erica Carras. 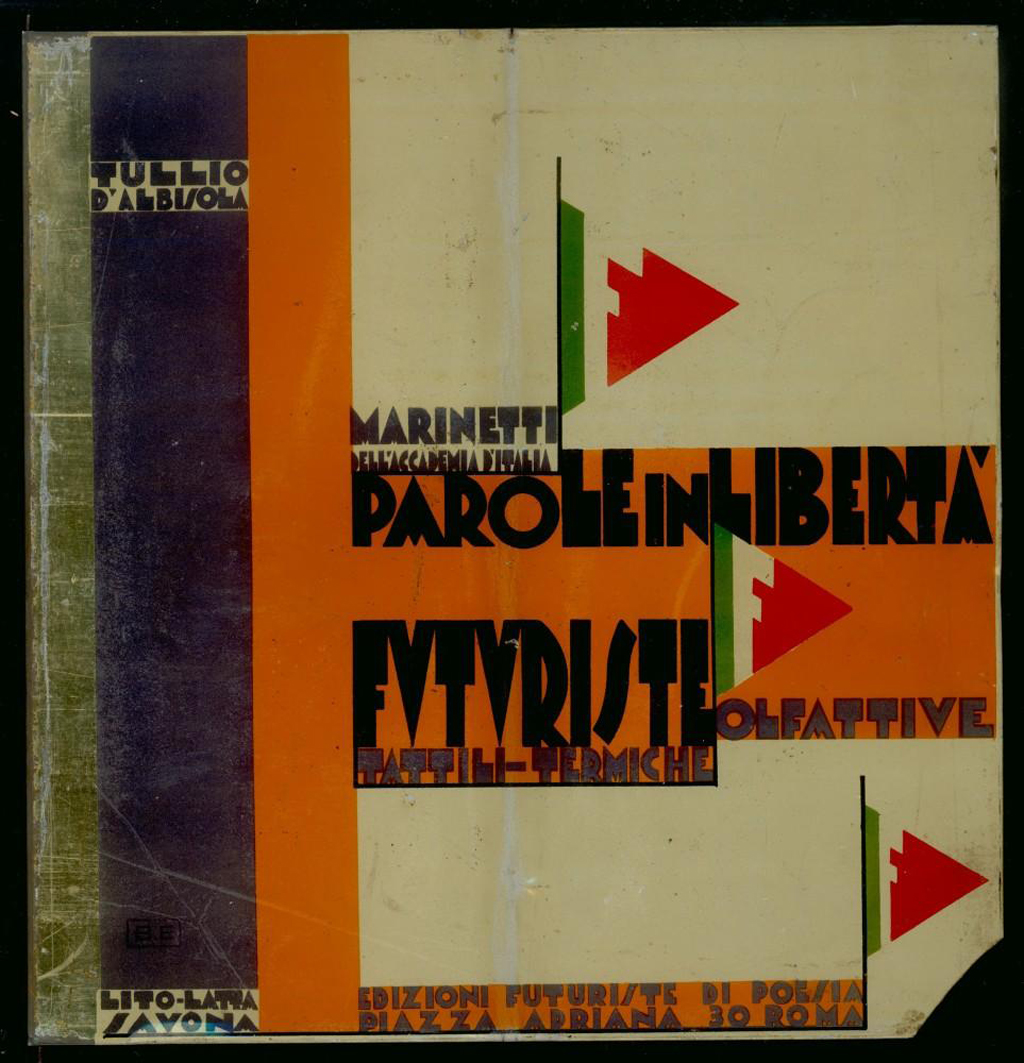 Cover of Parole in Libetà Futuristi Olfattive Tattili-Termiche by F.T. Marinetti and Tullio d’Albisola (Savona: Lito-Latta, 1932). The cover (and the entire book) was printed lithographically on tin. 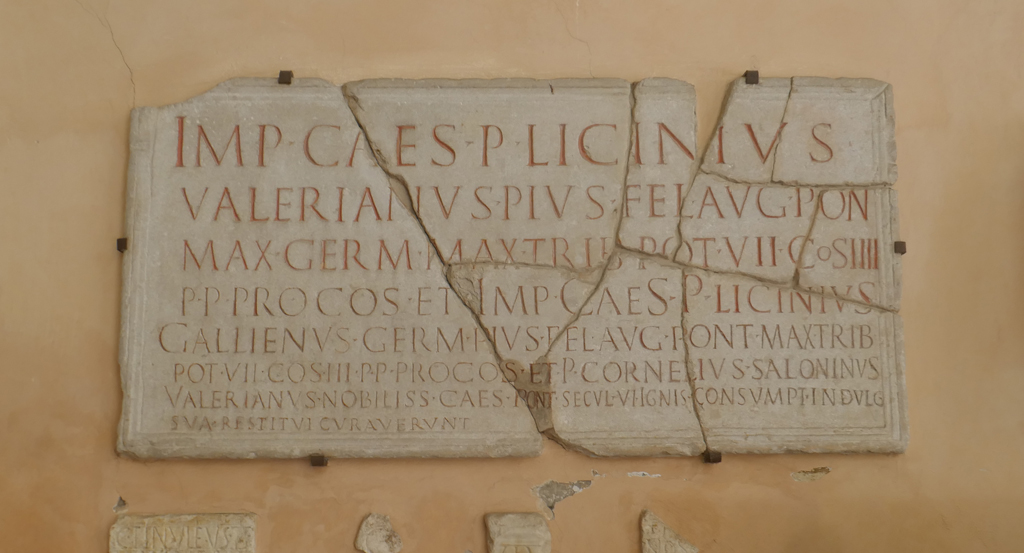 Ancient Roman inscription in the Museo Lapidario Estense in Modena. 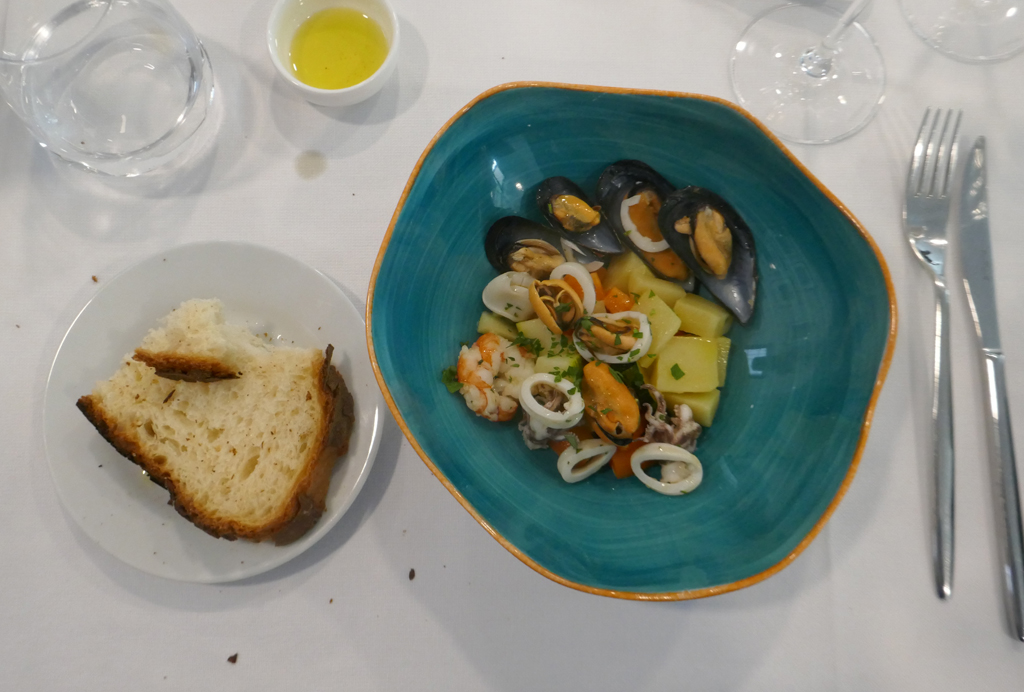 We ate at Oyster Barba because it was near Officina Typo, a letterpress shop run by Gina Paolini, her husband Silvano Babini, and their daughter Ebe Babini. A visit to the shop was an optional part of the day’s activities and we thought that only the five of us had chosen it, but ten minutes or less after we arrived there, our van pulled up and the rest of the Legacy of Letters 2022 participants piled in. What was intended as a brief visit stretched into an hour or so as everyone was eager to see the printing presses and type; buy postcards, playing cards, and other items for sale; and talk to Gina and Silvano. (Ebe was unable to be present.) The walls of Officina Typo were festooned with posters and other printed pieces, all designed by Gina. 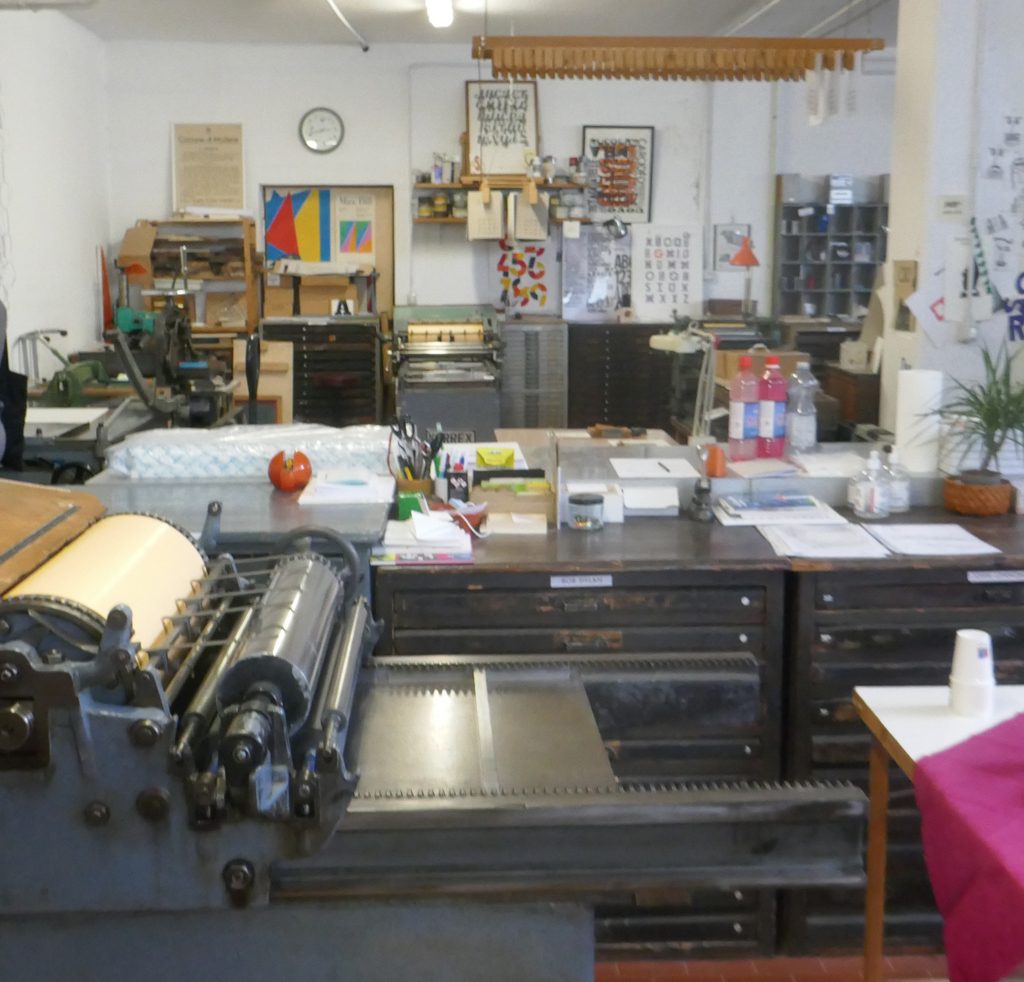 A view of Officina Typo in Modena. Some of Gina Paolini’s designs are visible on the back wall. 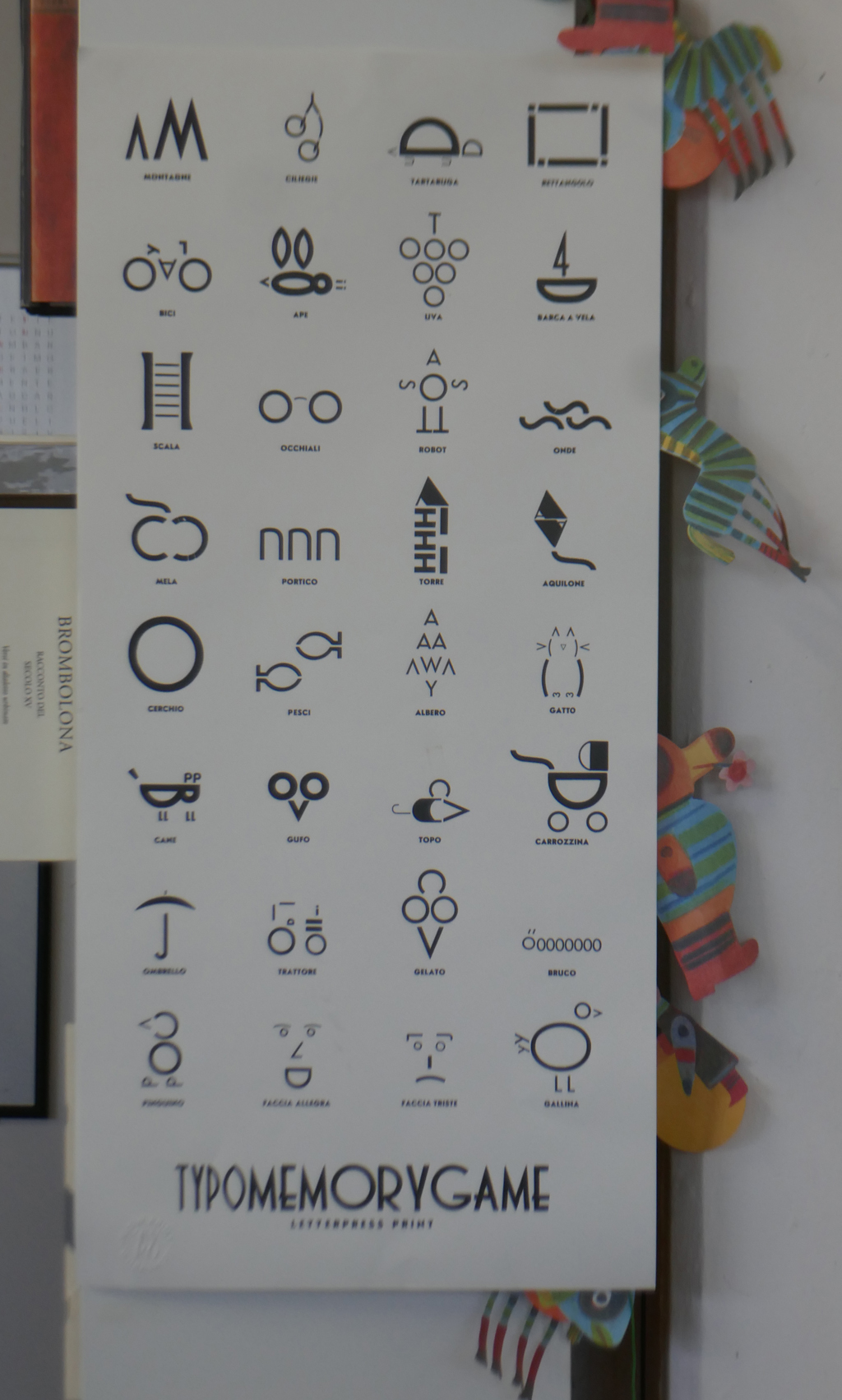 After lunch we drove to the Museo Giusti, located in the Modenese countryside. The museum, dedicated to the history of balsamic vinegar, was created by the venerable Gran Deposito Aceto Balsamico Giuseppe Giusti company, a producer whose roots can be traced back to 1605. At the museum we began with a guided tour that explained the process of distilling and aging grape must until it turns into balsamic vinegar of various vintages. The visit ended, naturally, with a tasting of several differently aged balsamic vinegars as well as saba (the grape must) and a balsamic vinegar vermouth made by Giusti. The latter, currently unavailable in the United States, was surprisingly tasty and several of us bought bottles to bring home. (It makes a great negroni!) 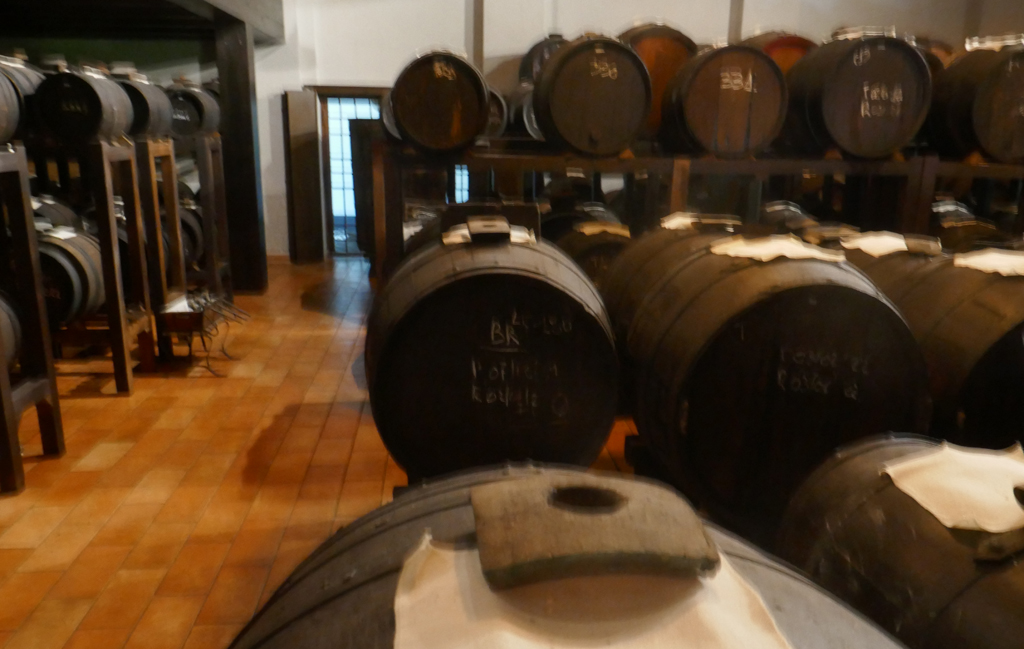 Casks for aging balsamic vinegar in the Museo Giusti. 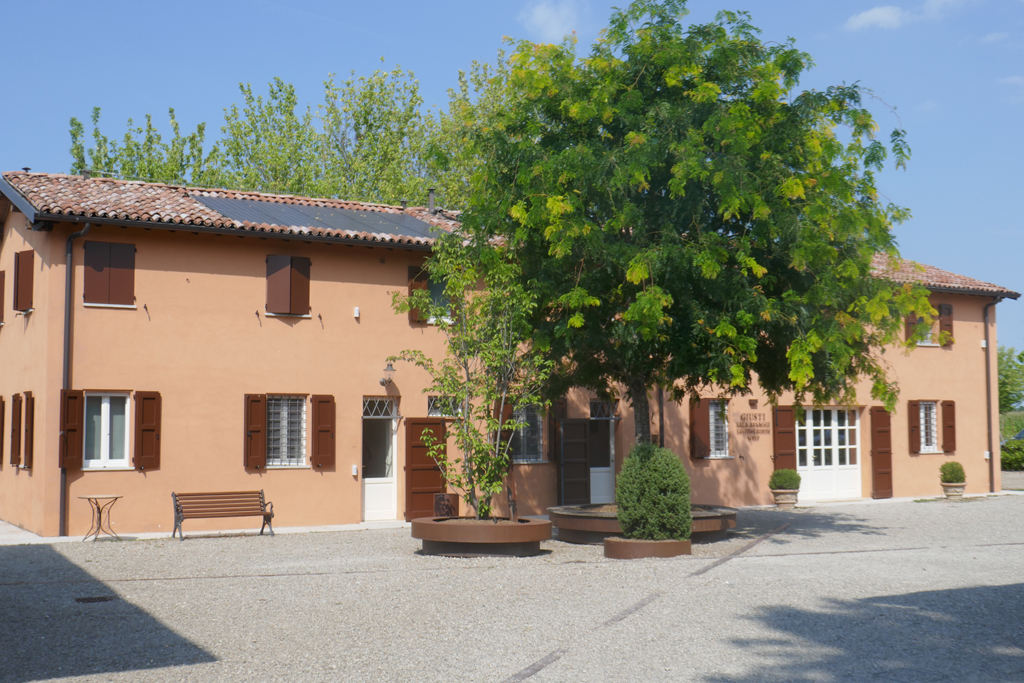 The building housing the tasting room at Museo Giusti. 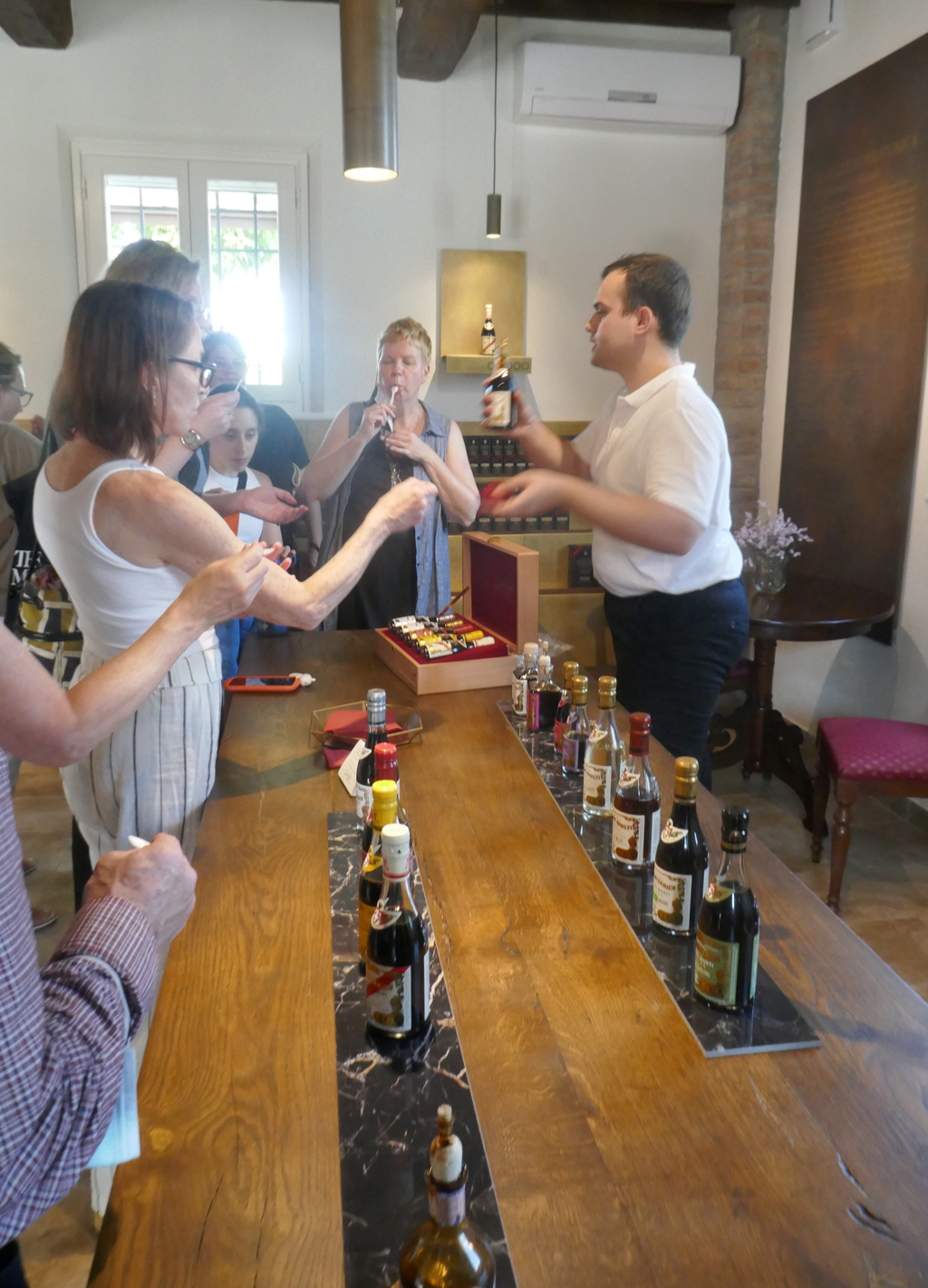 After we had loaded up on balsamic vinegar and balsamic vinegar products at Museo Giusti we drove back into Modena for cocktails at Caffetteria Giusti, followed by a private dinner at Hosteria Giusti, located in the back of Salumeria Giusti. (The world of gastronomy in Modena is full of members of the Giusti family.) The interior of Caffetteria Giusti was too small for our group so we drank our cocktails—including a Modenese spritz made with lambrusco—at tables set up in the street. Fortunately, the heat had diminished by this time.

We had trouble finding the entrance to Hosteria Giusti at first since we had not been told that it is located in a vicolo (alley) behind Salumeria Giusti. The sense of a “secret” entrance, akin to a Prohibition speakeasy, heightened the special nature of a meal in which we were the only diners. The prix fixe dinner consisted of gnocchi fritto (the Modenese equivalent of the fried dough “pillows” we ate at Locanda di Culatello in Soragna), lasagna Modenese, crema di patate con vitello di guanciale (mashed potatoes with veal cheeks), and panna cotta con saba (panna cotta with grape must). Everything was good, but the latter was the most memorable.

When dinner was over we all piled onto the van for the long journey back to Cornuda and a good night’s sleep at Villa Bolzonello. 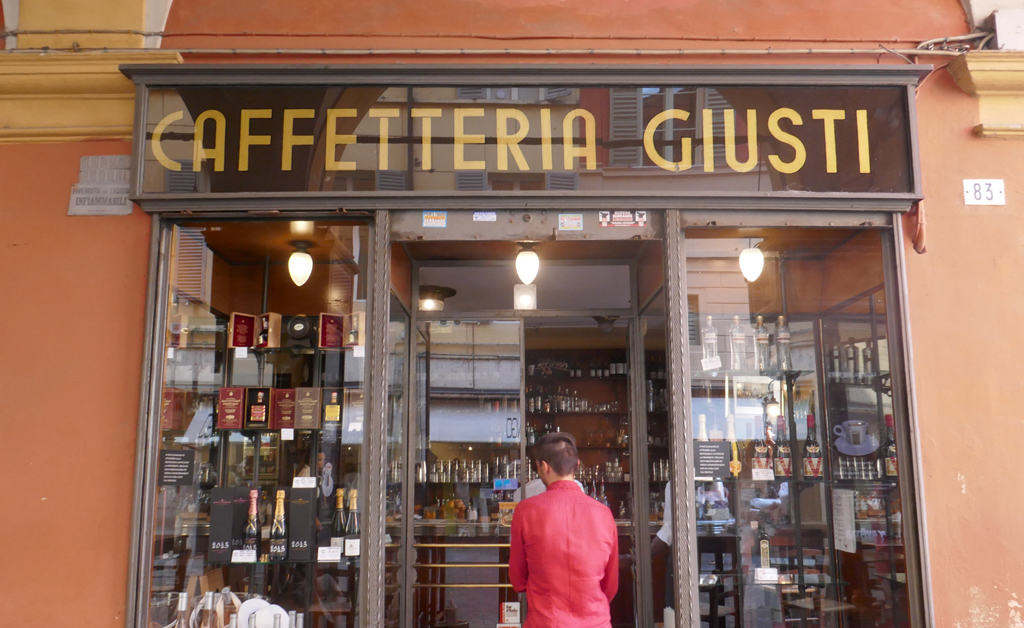 The exterior of Caffeteria Giusti in Modena with its lovely Art Deco lettering. 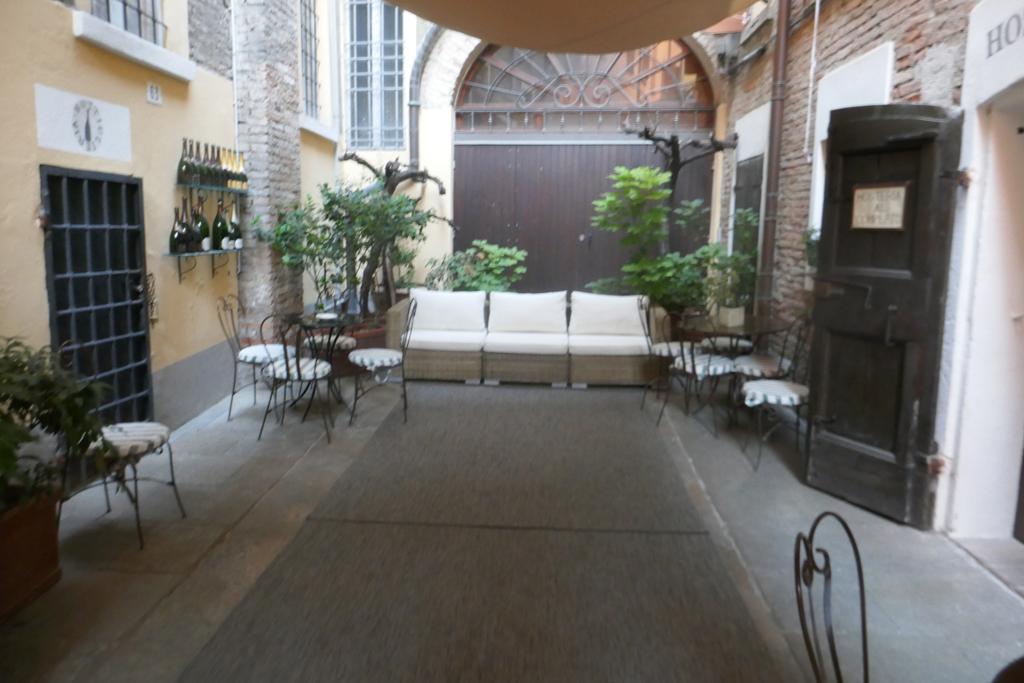 Sofas and chairs at the end of the alley outside the entrance (right) to Hosteria Giusti in Modena. 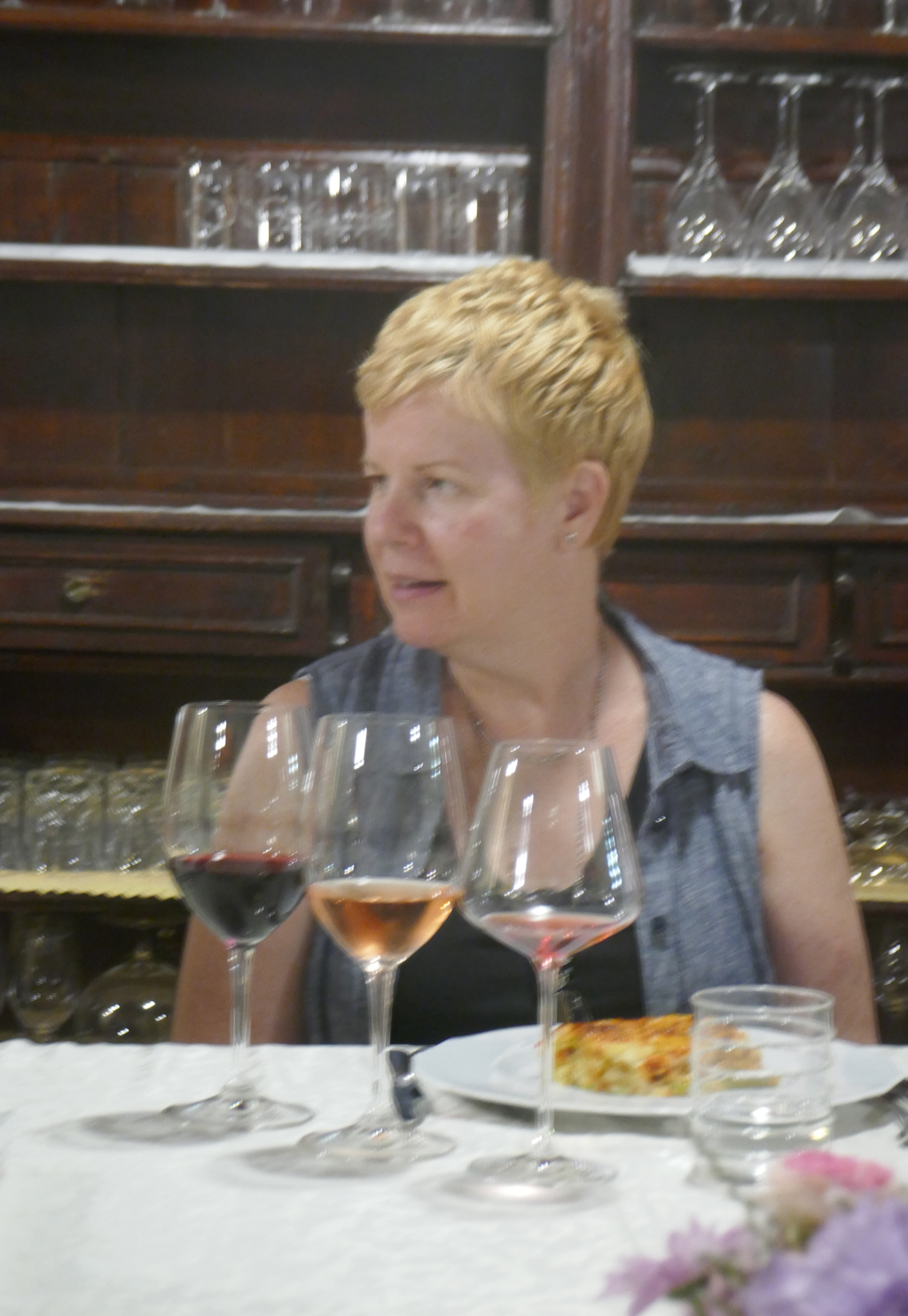 Anita Merk in conversation during dinner at Hosteria Giusti. On her plate is the lasagna Modenese. 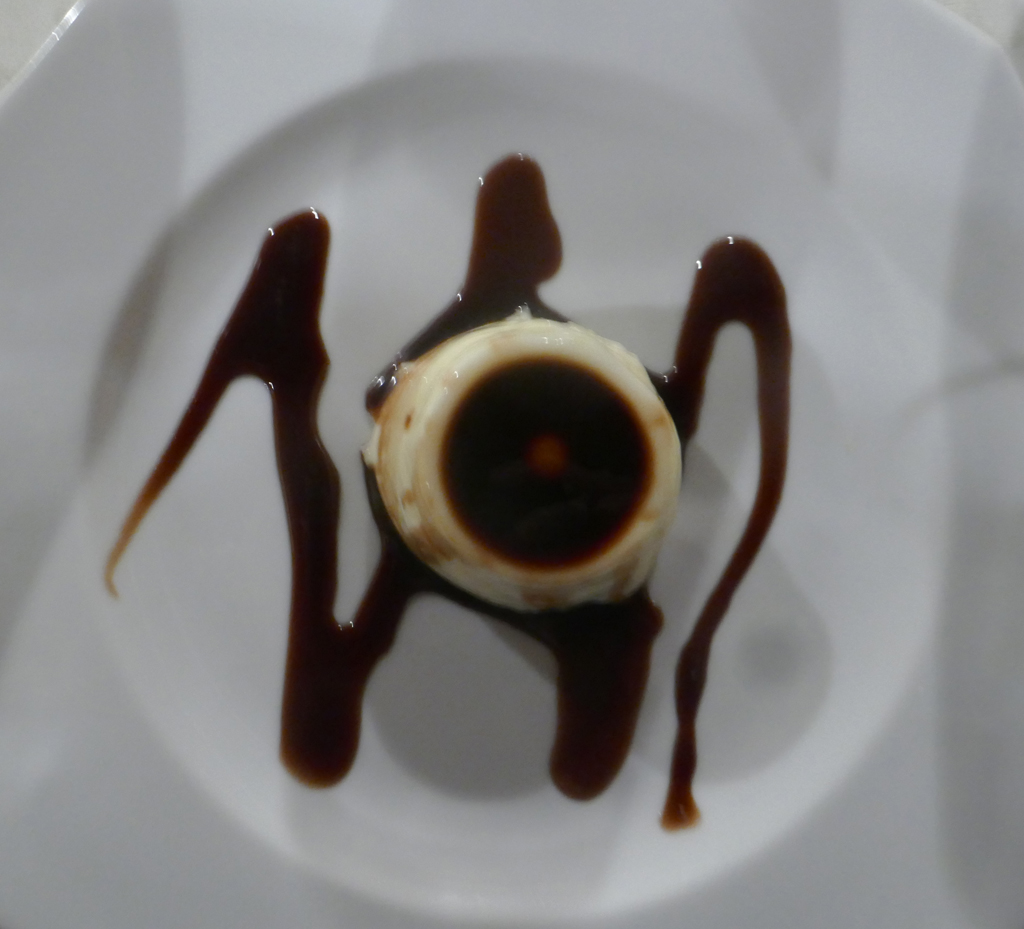 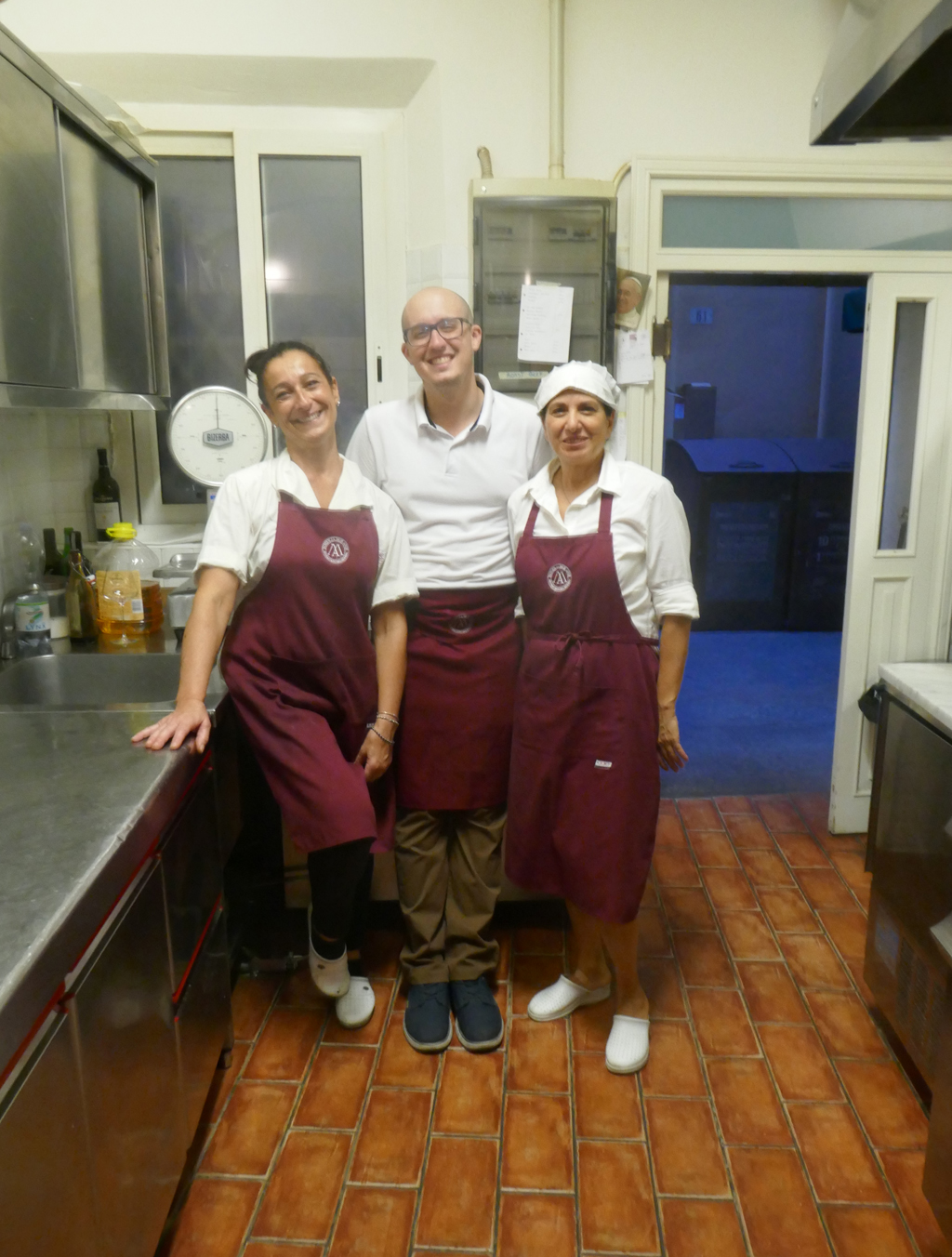 The kitchen staff at Hosteria Giusti in Modena.