This is the fourth installment of a day-by-day visual account of Tipo Cibo Vino 2022. (All photographs, unless otherwise indicated, are by me and are copyright Legacy of Letters.)

In the morning we walked the short distance from the Hotel Torino to the Biblioteca Palatina in the Pilotta. There Dott.ssa Caterina Silva, the curator at the Museo Bodoniano, had arranged a mix of manuscripts, books, and realia (library-speak for physical objects) for us to examine and delight in. We began with two of our favorite manuscripts in the collection of the Biblioteca Palatina, an enormous Bible (Pal. 386) copied out in the Carolingian era and a copy of the Chronicle of Eusebius written out by Bartolomeo Sanvito (Pal. 64) c. 1465–1466. The latter has an immensely complex color-coded layout that we were unable to explore in detail since our primary purpose was to see material related to the punchcutting and printing activities of Giambattista Bodoni. 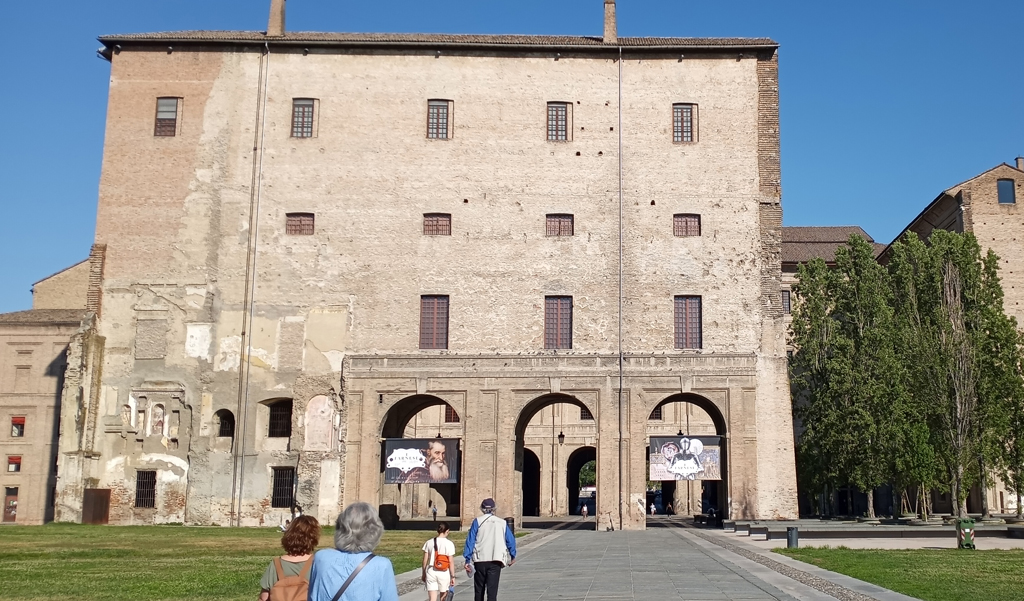 Legacy of Letters participants walking toward the Pilotta, site of the Biblioteca Palatina and the Museo Bodoniano. Photograph by Henri-Paul Bronsard. 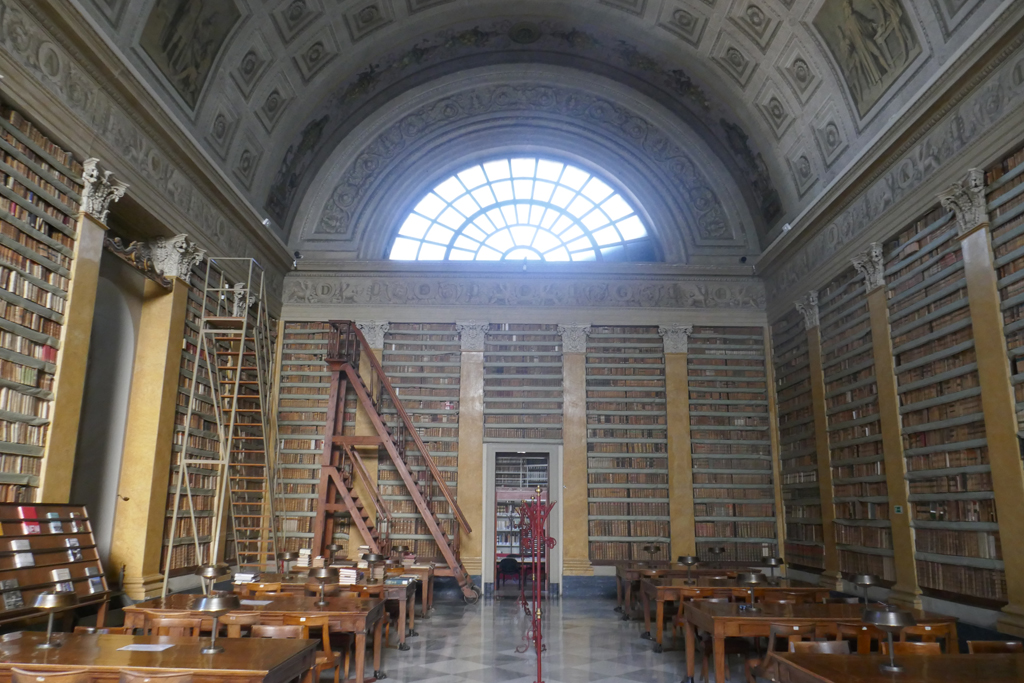 One of the reading rooms of the Biblioteca Palatina in Parma. Our consultation room was through that doorway. 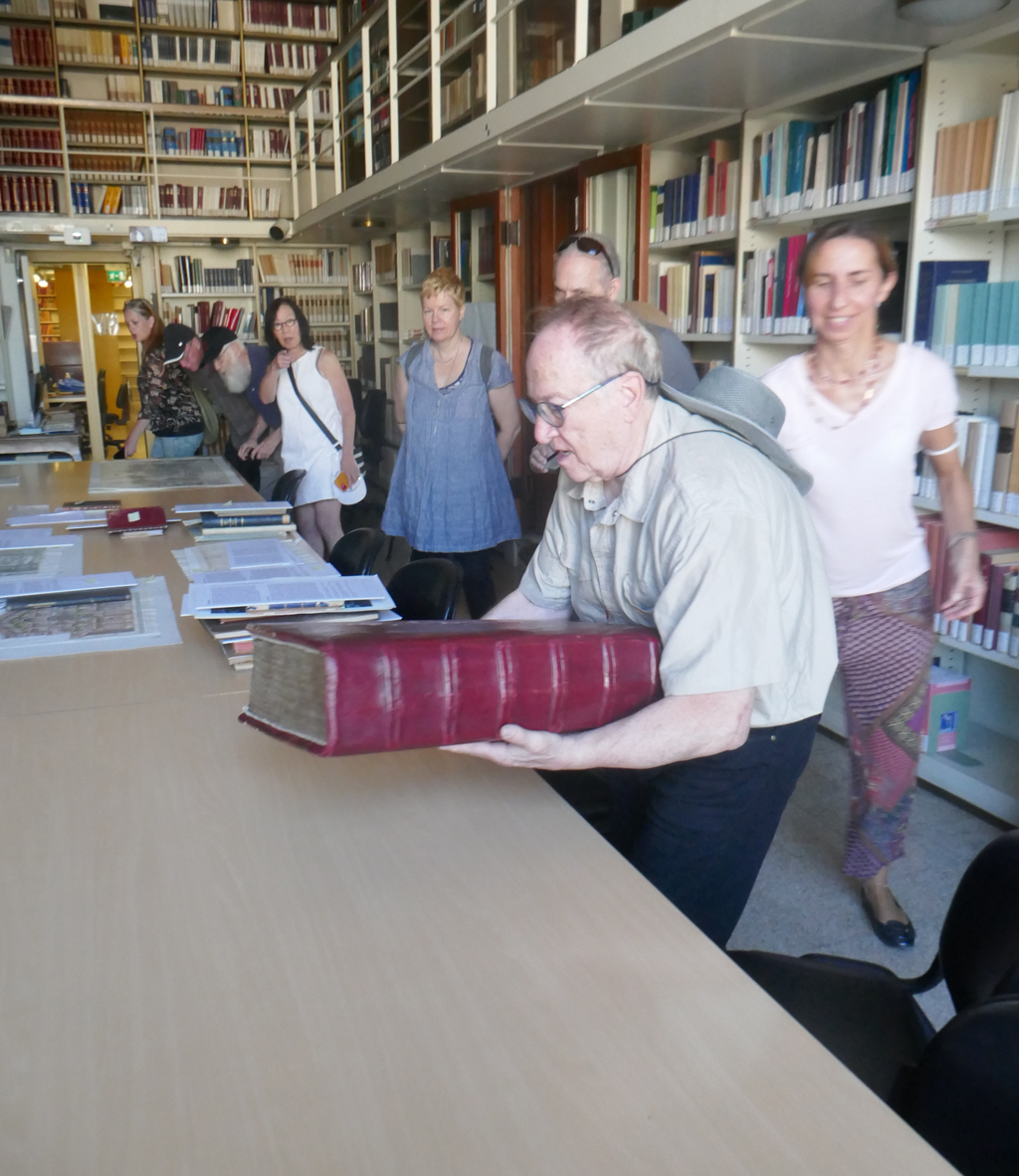 Henri-Paul Bronsard carrying the enormous Bibbia Antica from the library cart to the consultation table. Dott.ssa Silva is behind him on the right. 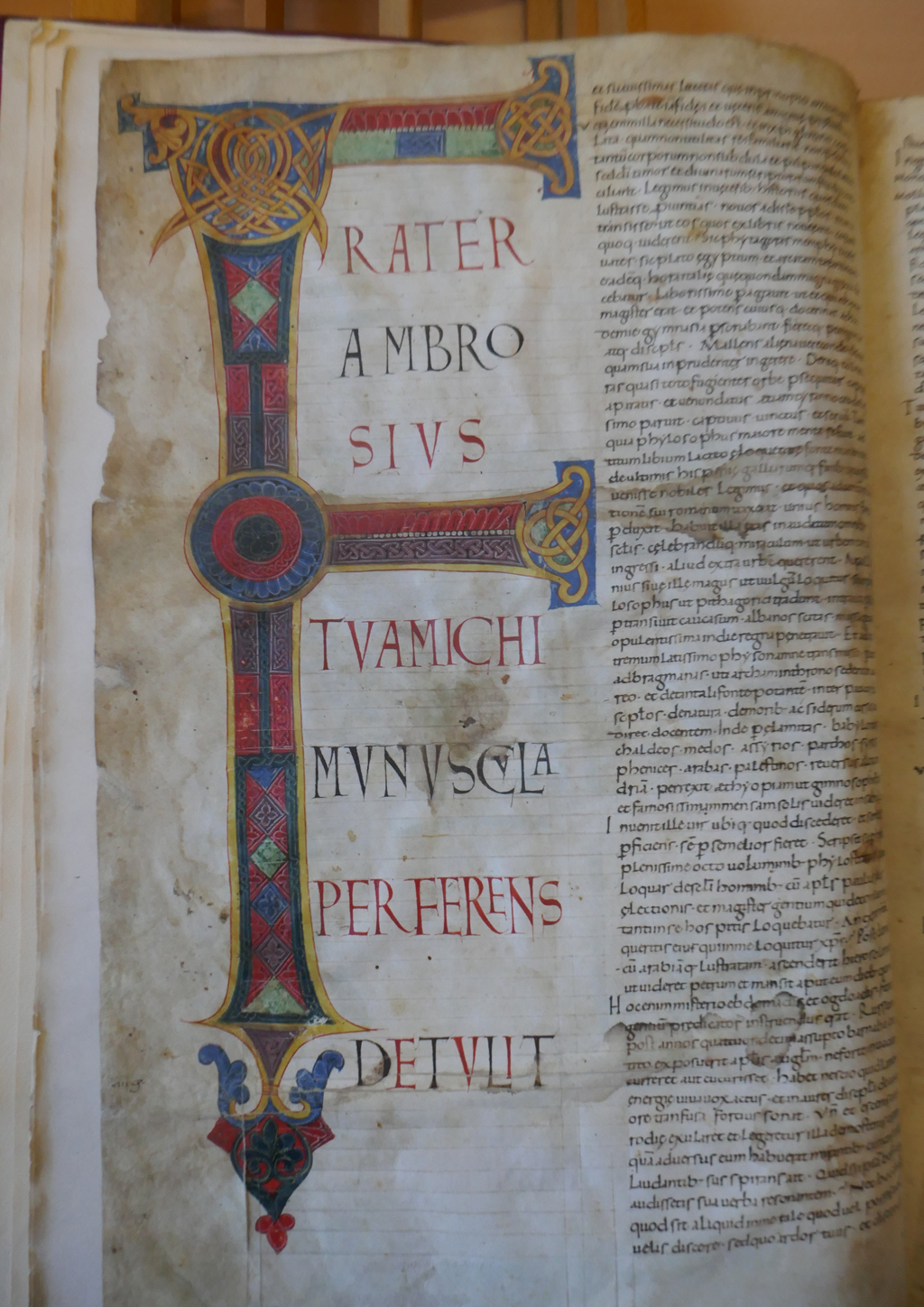 Detail of a page from the Bibbia Antica (Pal. 386) showing a decorated initial F and some colored versals. The text is written out in a Carolingian minuscule. 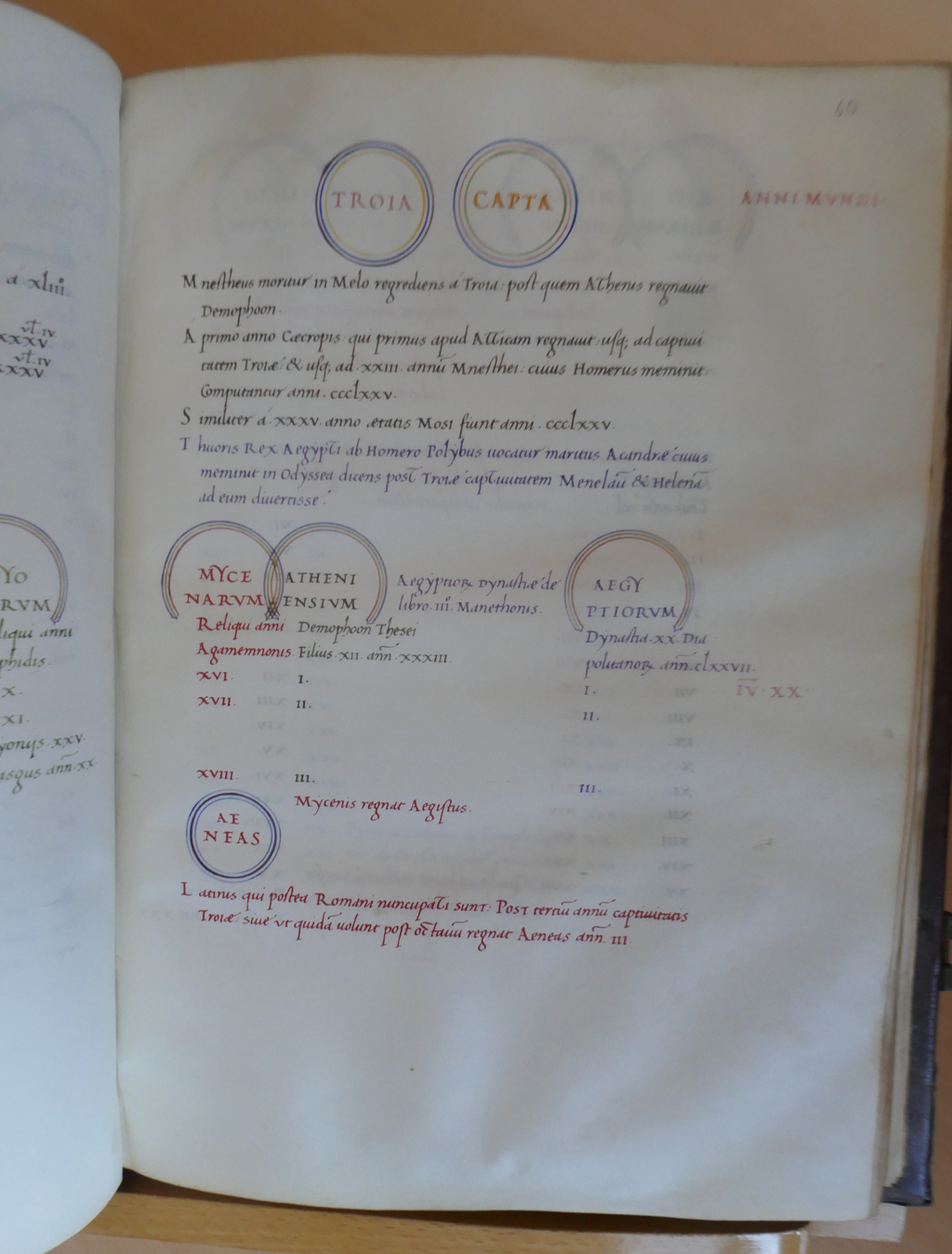 A page from the Chronicle of Eusebius (Pal. 64), a history of the world, designed and written out by Bartolomeo Sanvito in multiple colored inks (c.1465–1466). The heading at the top is the entry noting the capture of Troy by the Greeks.

In the past we have seen the Bodoni material in the Museo Bodoniano itself, but the space is undergoing renovation, and thus Caterina brought it to us in the consultation room of the Biblioteca Palatina. The items I had requested from her were: eight books printed by Bodoni (including type specimens from 1771 and 1788), the two-volume Manuale Tipografico published posthumously by his widow in 1818, Les Caractères de l’Imprimerie by Pierre Simon Fournier le jeune (1764), Saggio de’ Caratteri della Fonderia dei Frateli Amoretti, Incisori e Fonditori (1811), and a selection of punches, matrices, and type moulds. Fournier’s types were a formative influence on Bodoni when he began his career printing for the Duke of Parma in 1768. This particular copy of Les Caractères de l’Imprimerie is unique for having pasted into it strips of a type specimen issued by John Baskerville, another one of Bodoni’s early heroes. The Fratelli Amoretti began their career cutting punches for Bodoni. 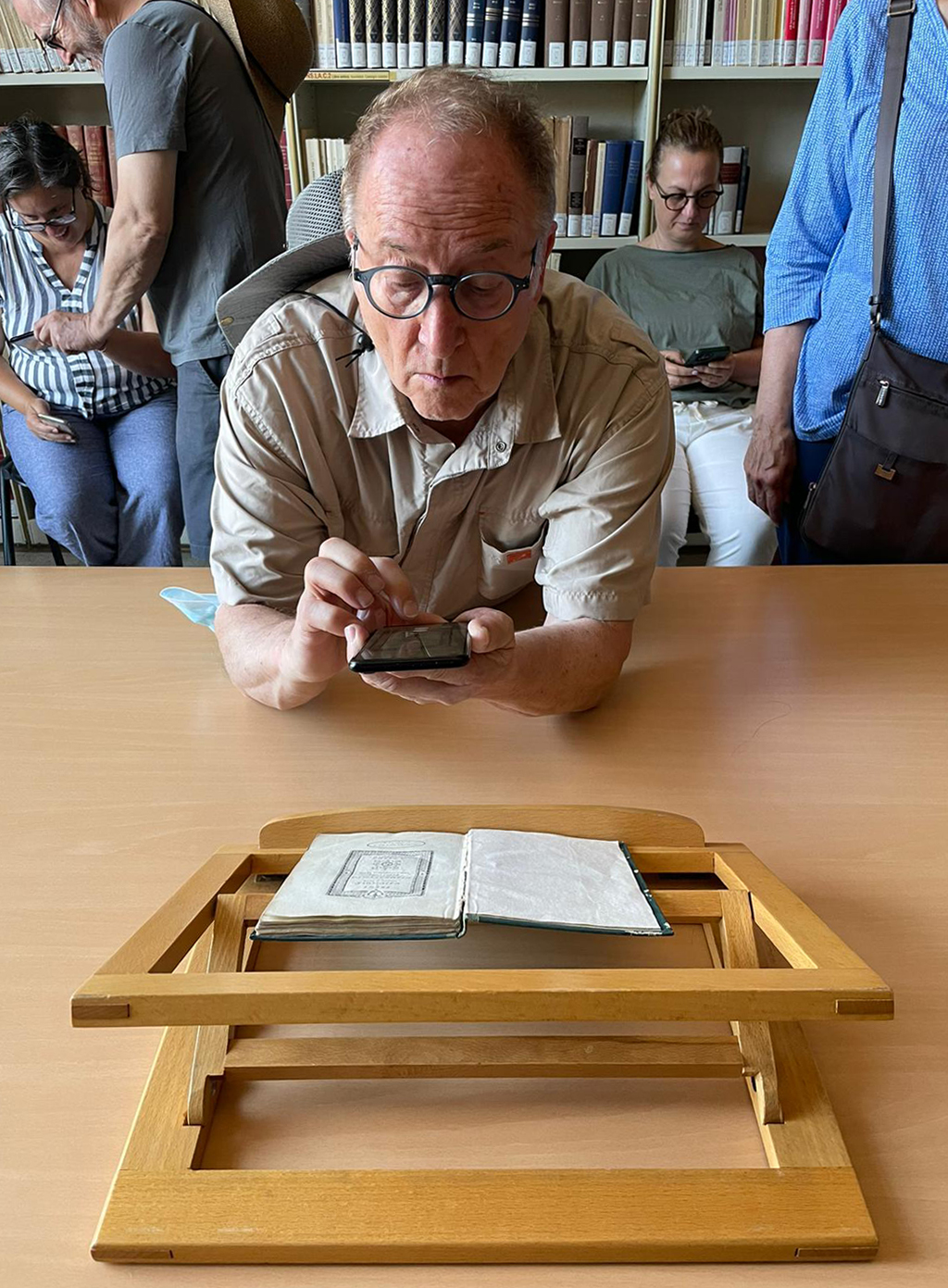 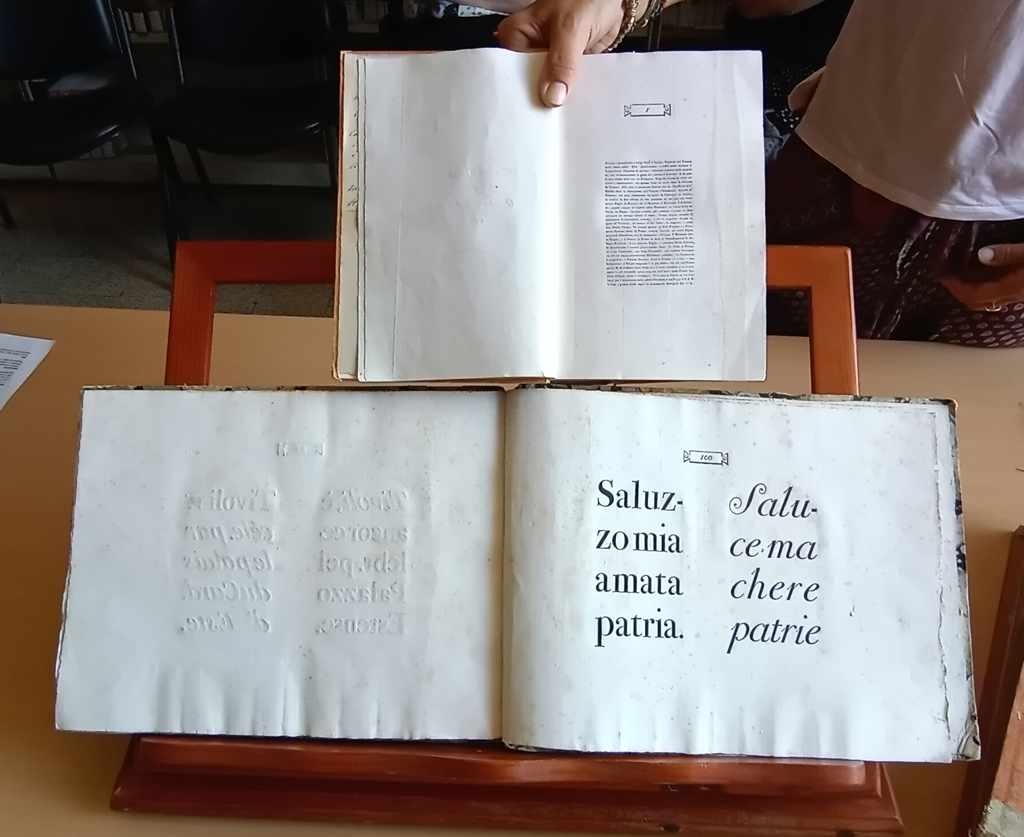 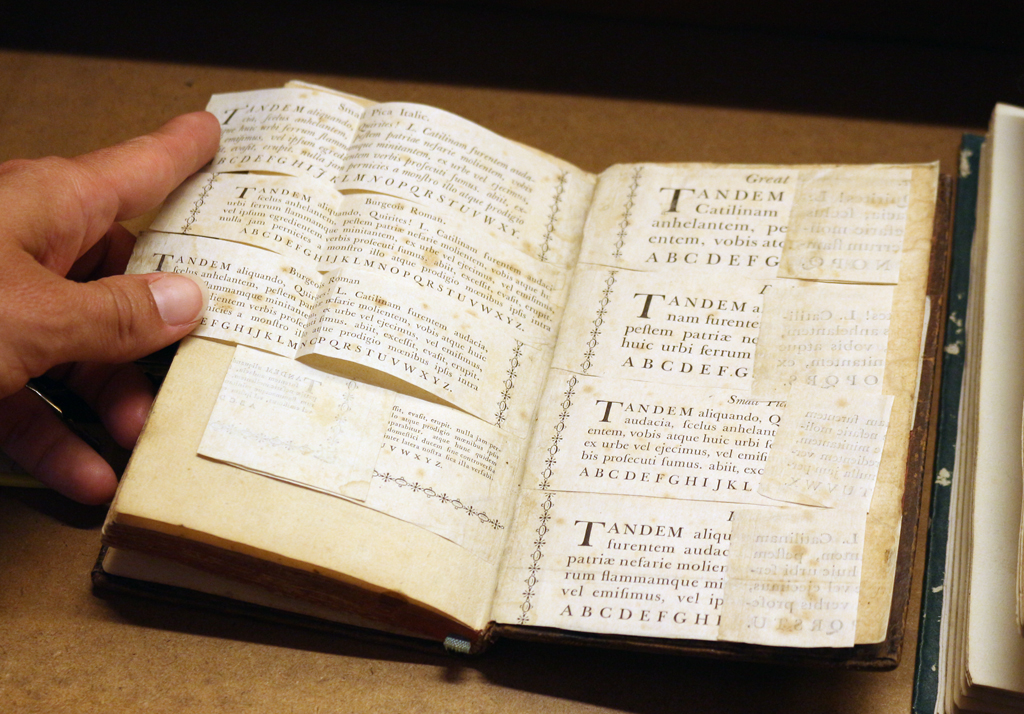 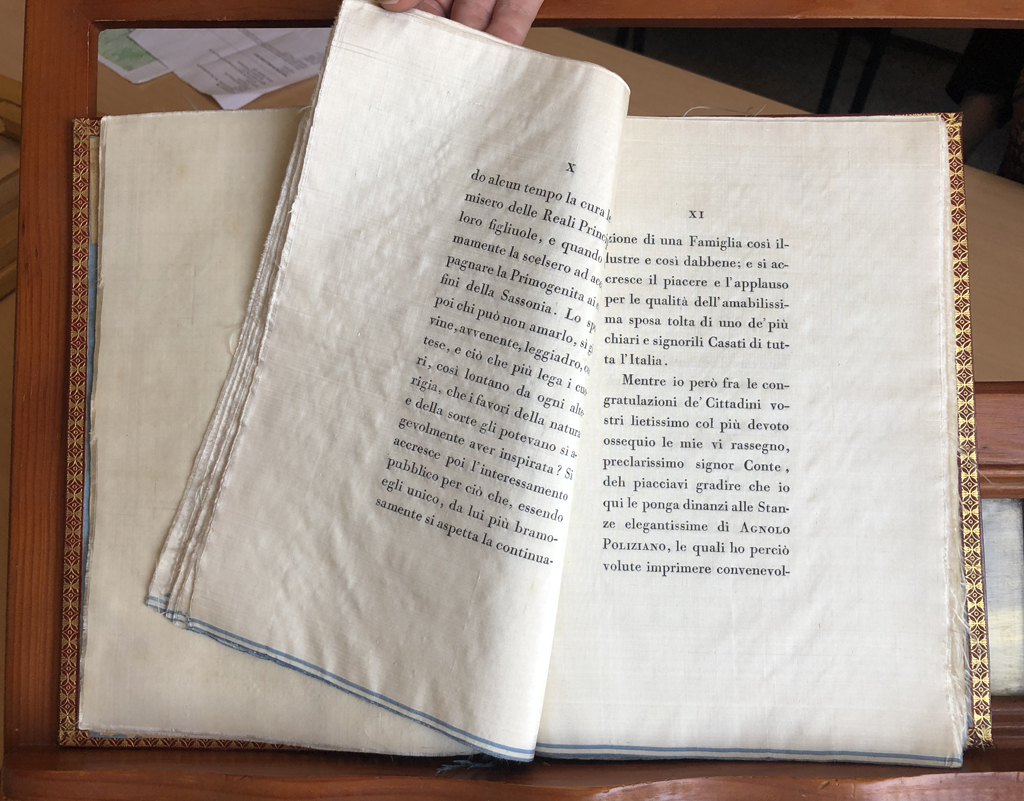 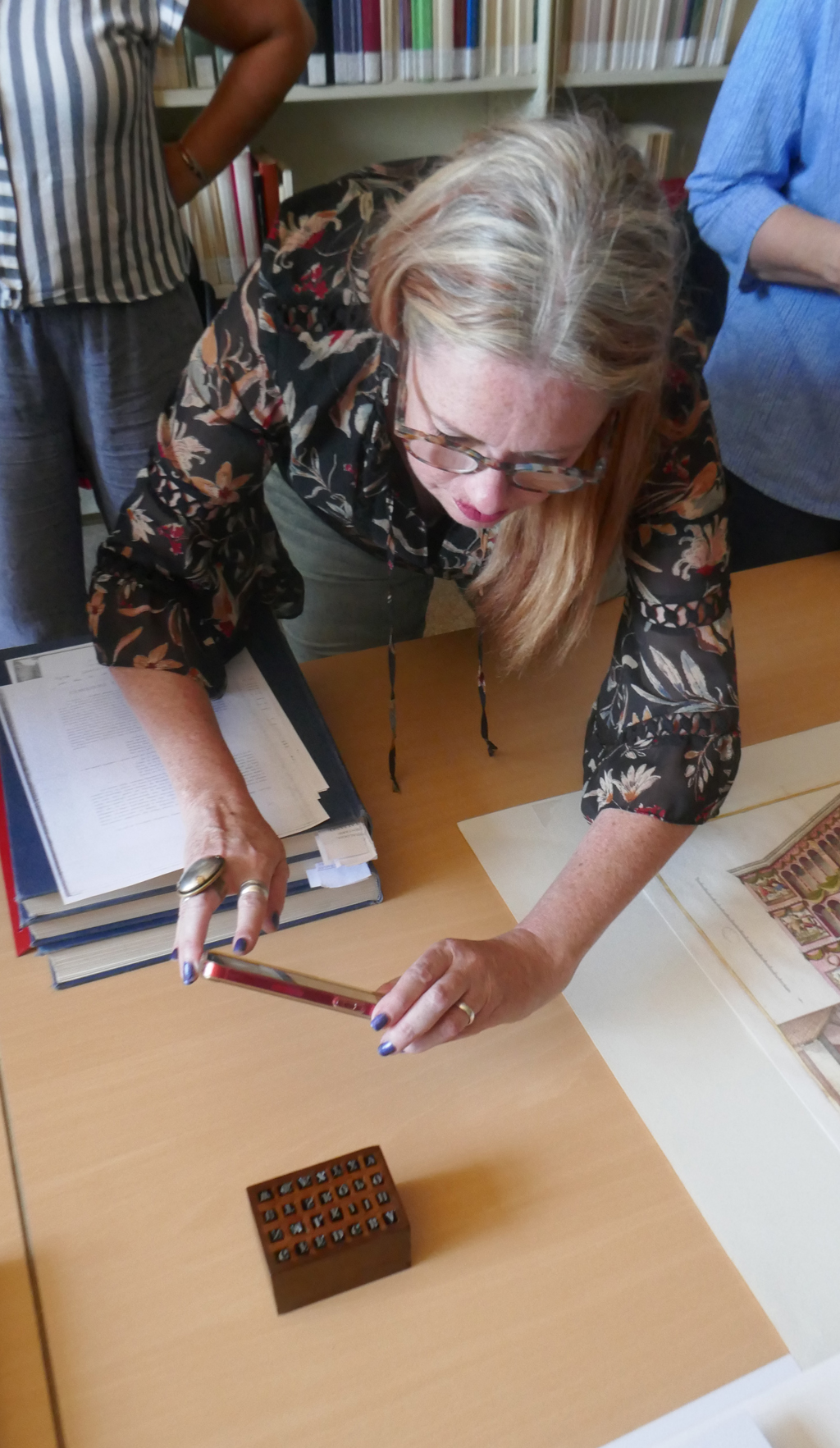 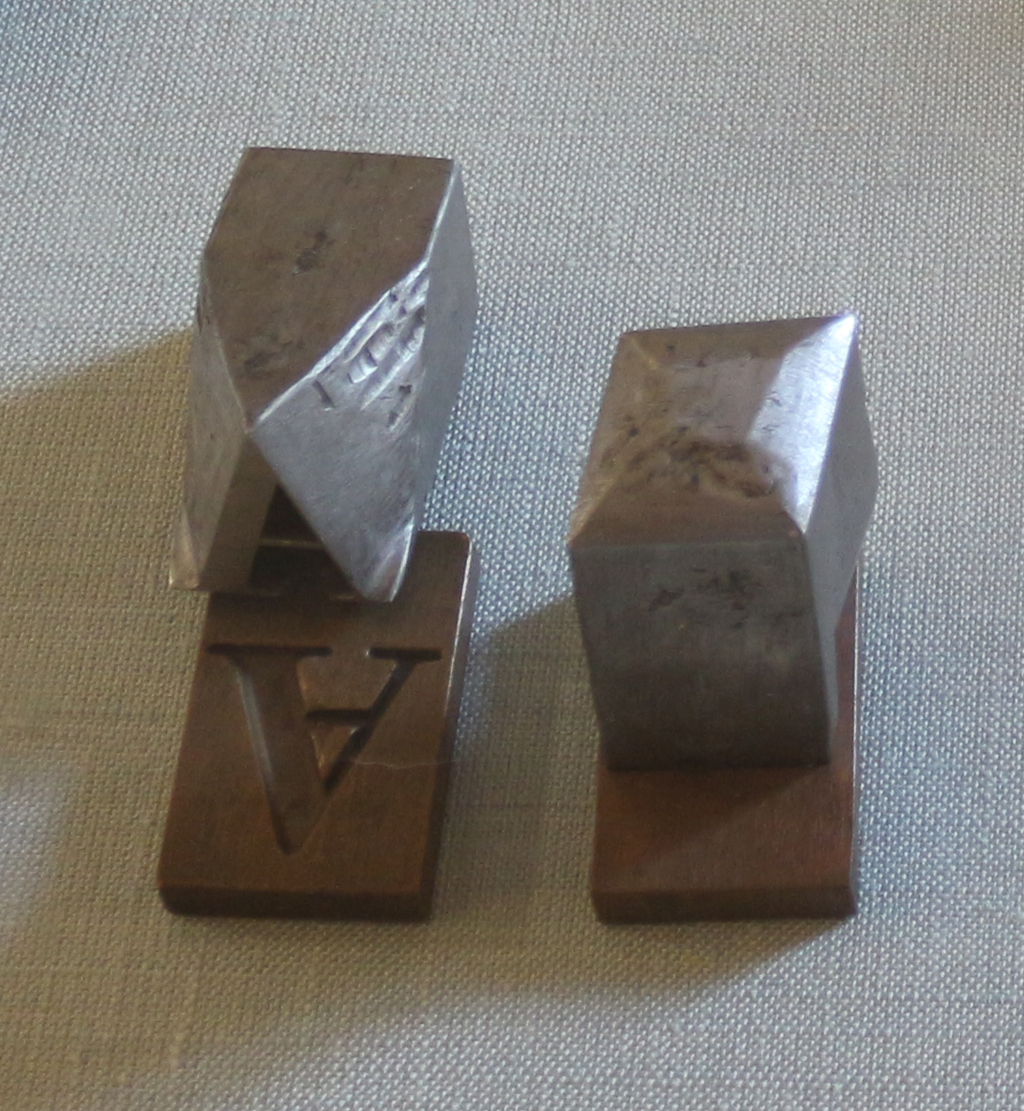 Punches cut by Bodoni and their matching matrices.

After more than two hours at the Biblioteca Palatina we reluctantly left since we had an appointment in Langhirano, the epicenter of prosciutto production in Italy, to tour the Galloni factory. Although we arrived late, Barbara Melegari still welcomed us cheerfully. Before she could lead us through the factory we had to put on booties, masks, hair caps, and full body suits so that we would not contaminate anything.  Once we were dressed in full gear, Barbara began by showing us the special glassed-in section for prosciutto destined for the United States, which has to meet more rigorous standards than that of other countries. After that we saw how the pork legs are salted, washed, seasoned, tested, and eventually hung to dry-age. 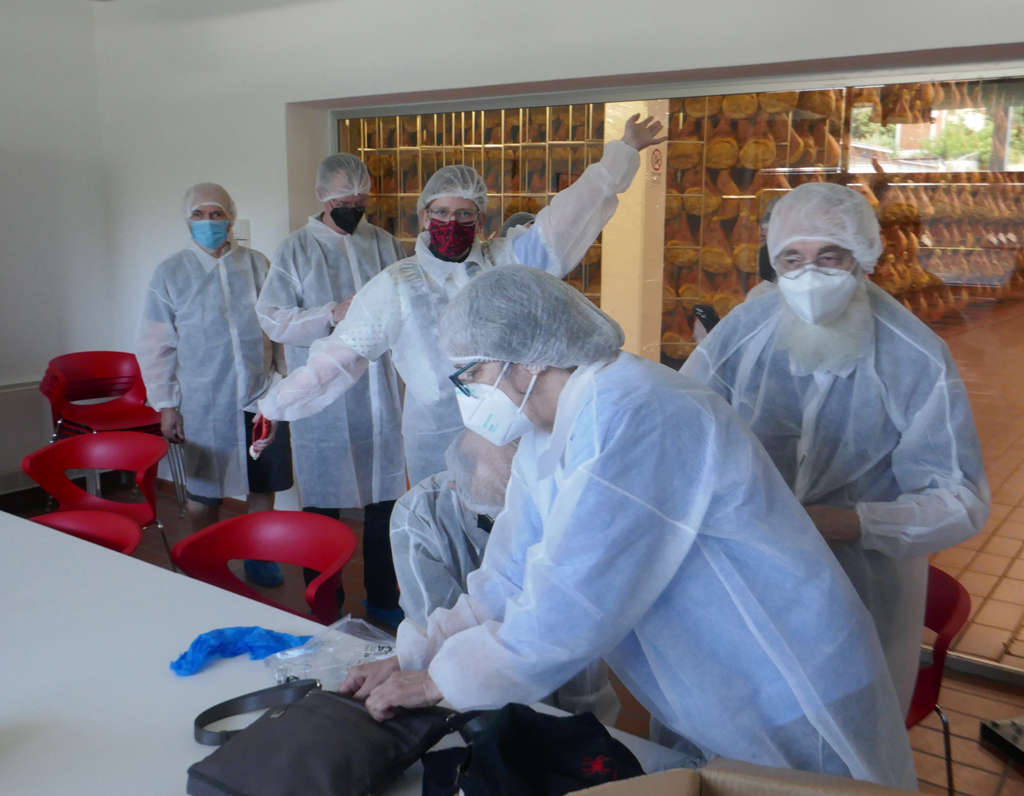 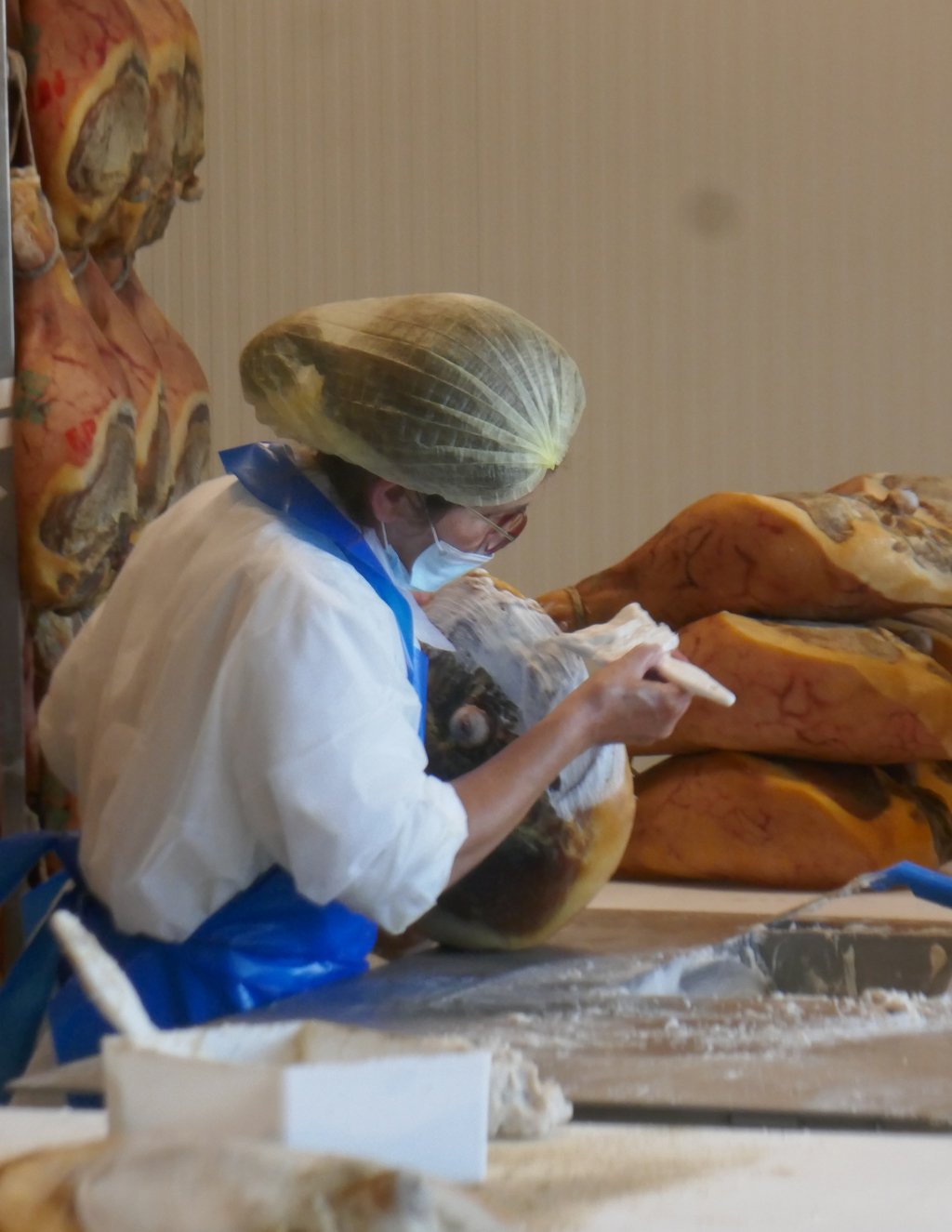 Coating the prosciutto with the salt mixture. 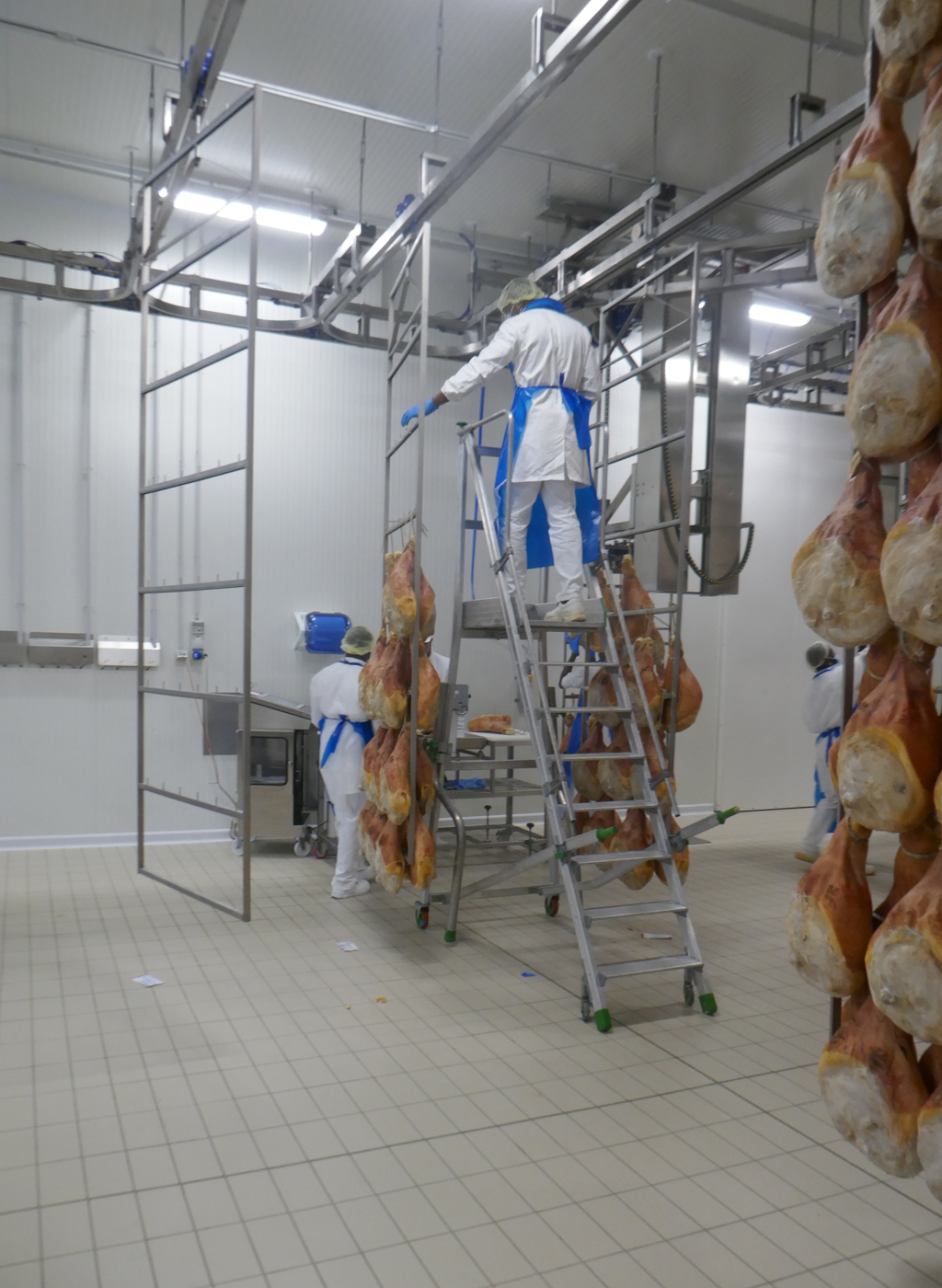 Hanging the prosciutto after it has been tested. 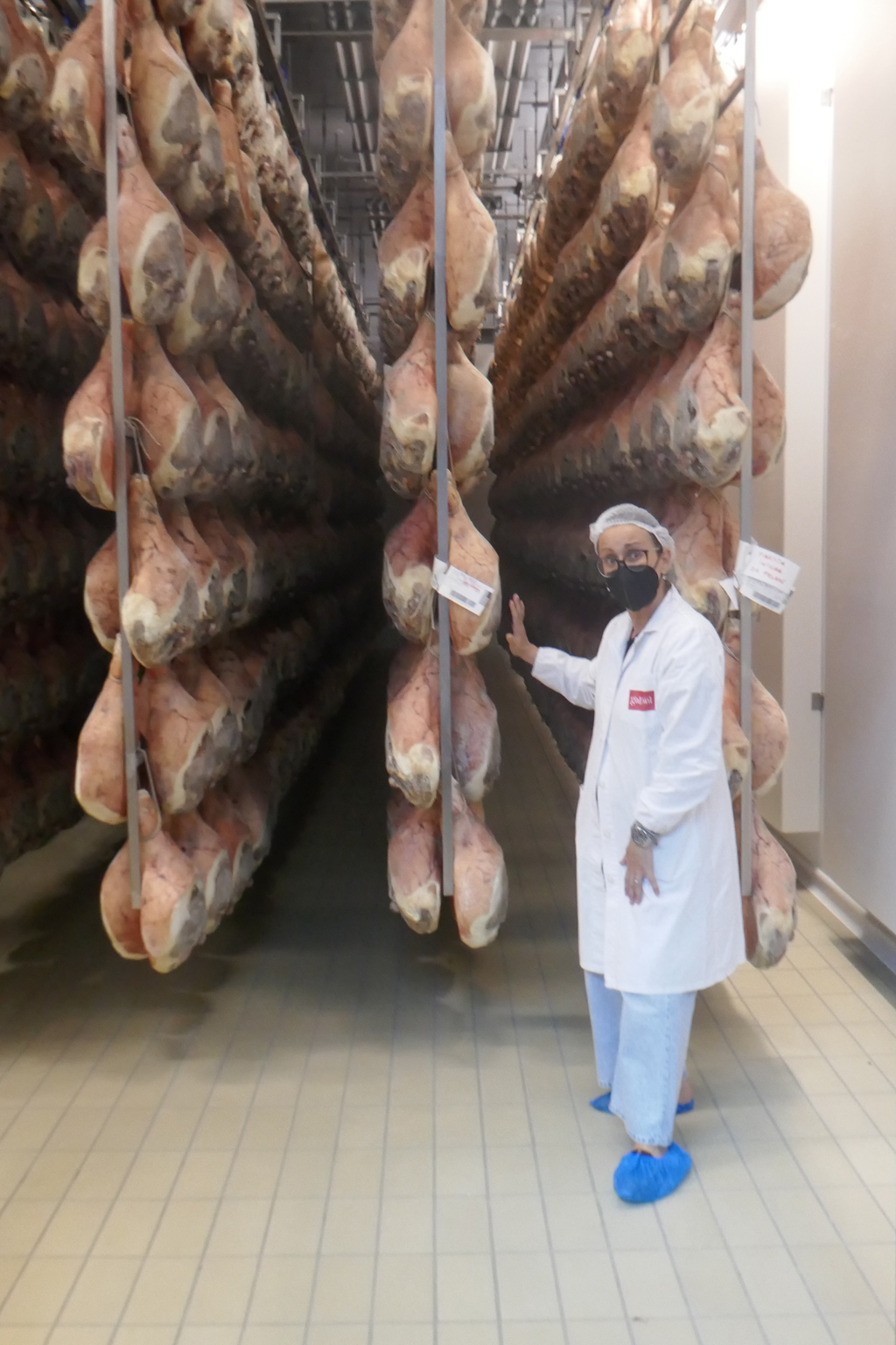 For lunch Barbara had kindly made reservations for us at Taverna del Castello di Torrechiara, a restaurant located on top of a 15th century fortified castle. Although the walk up the hill to the castle in the heat was enervating, it was worth it since the prix fixe meal of affettati misti, ravioli, risotto, and tiramisu was wonderful. We ate outside with a view of the Val Parma countryside. 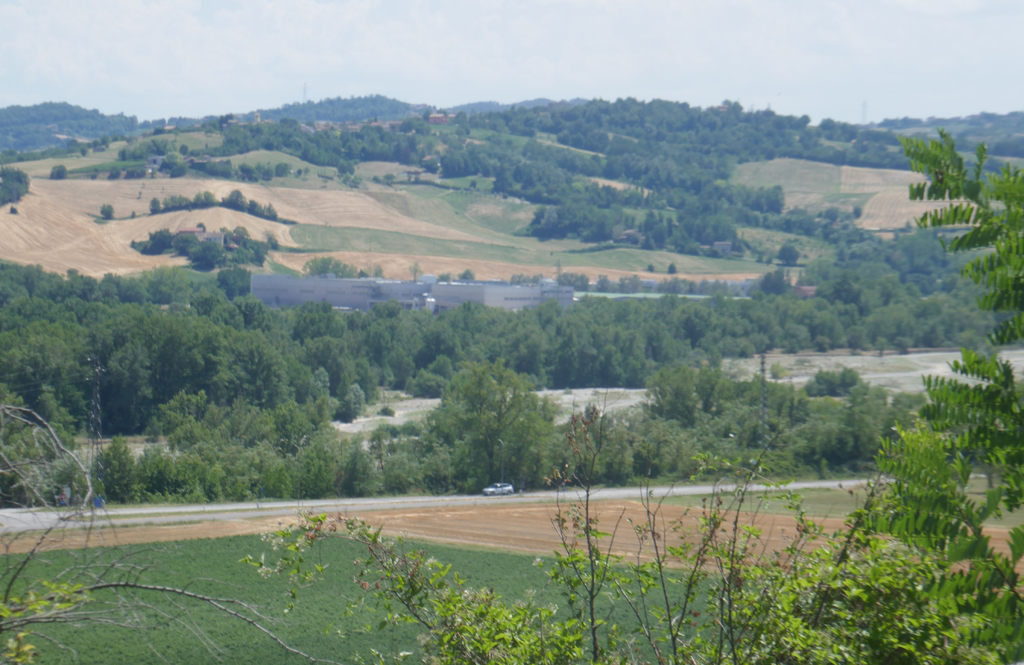 A view of the Val Parma from the walls of the Castello di Torrechiara. 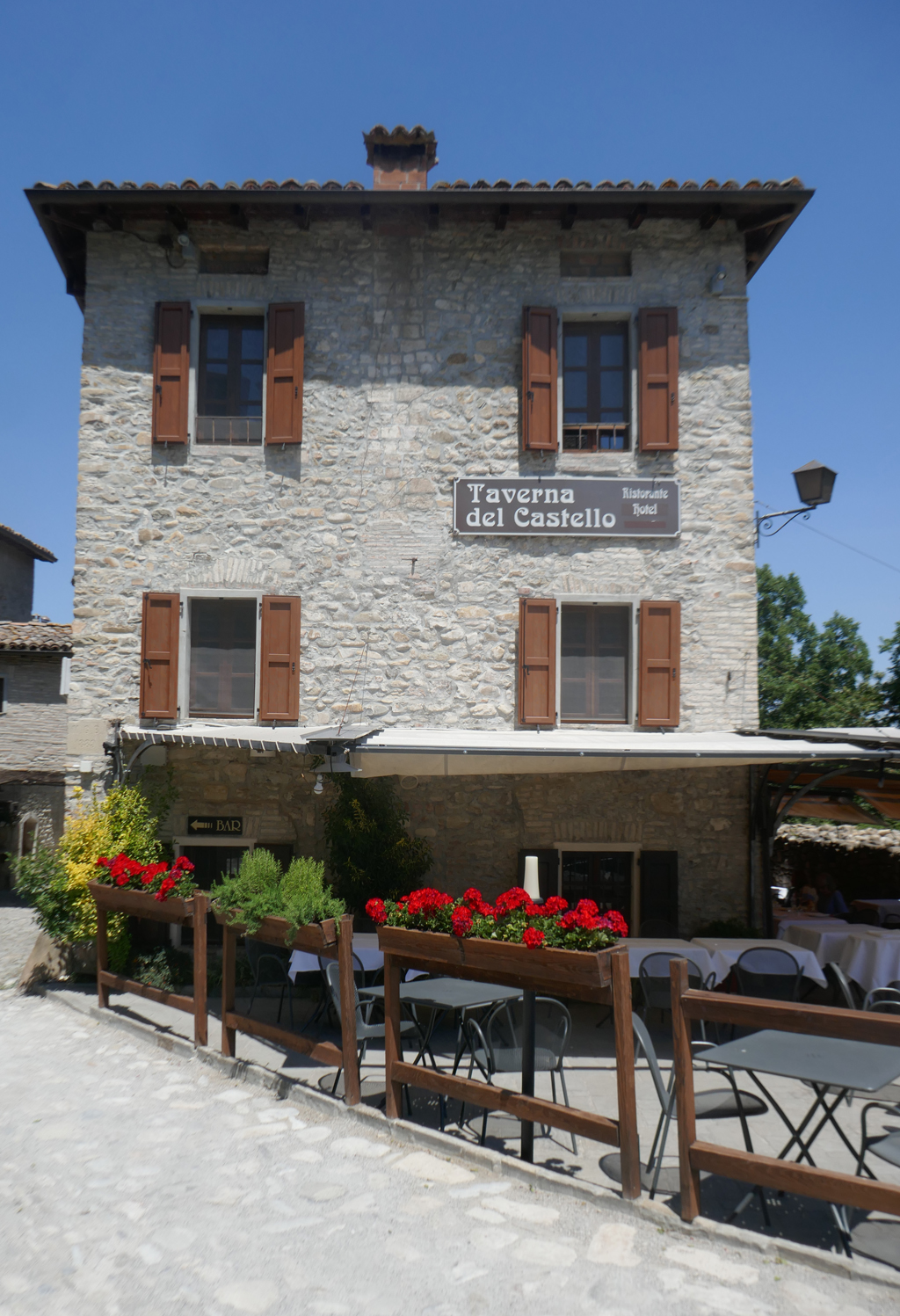 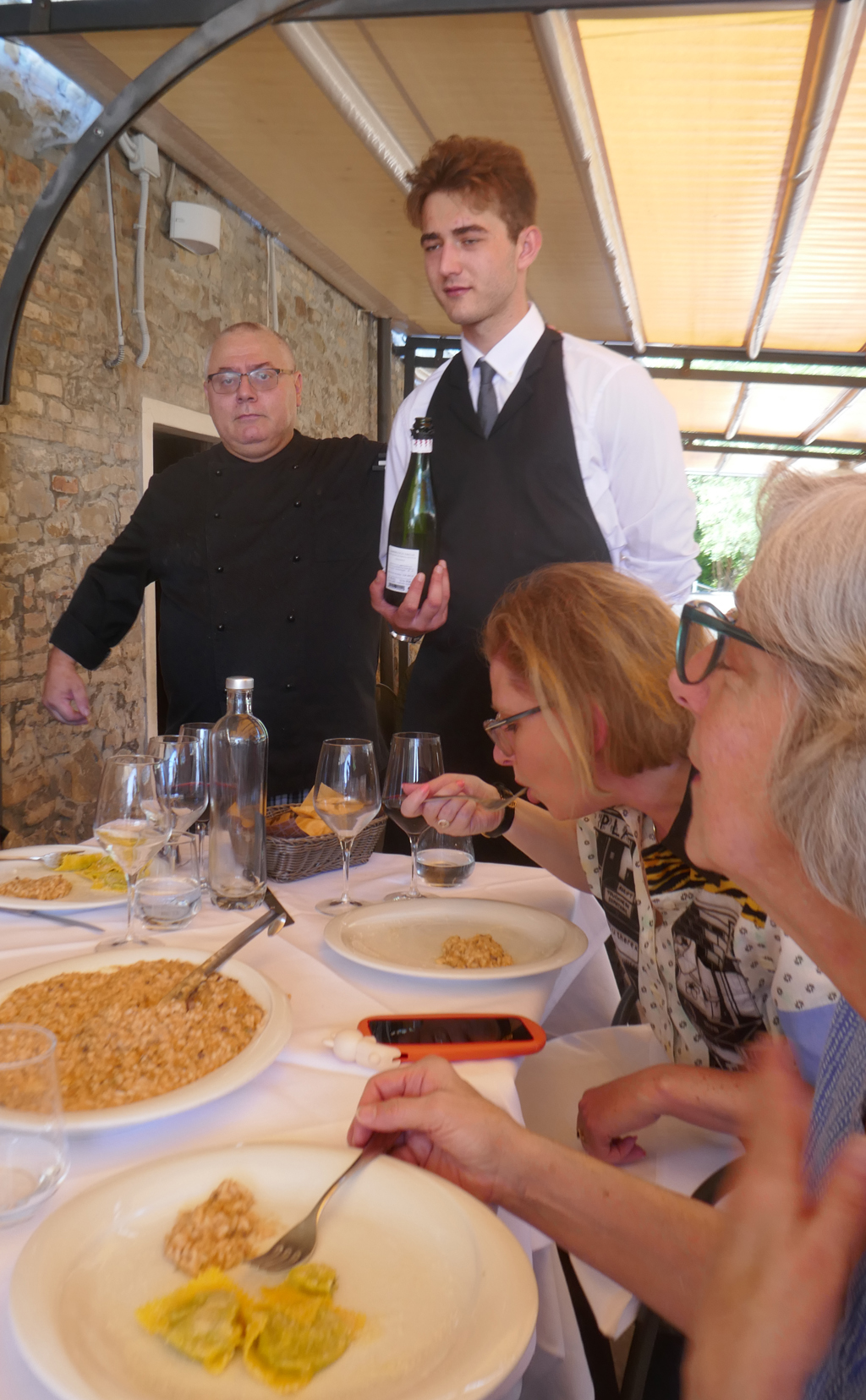 The chef (at left) checking to see if Angelina Lippert and Claire Lukacs are enjoying the meal. 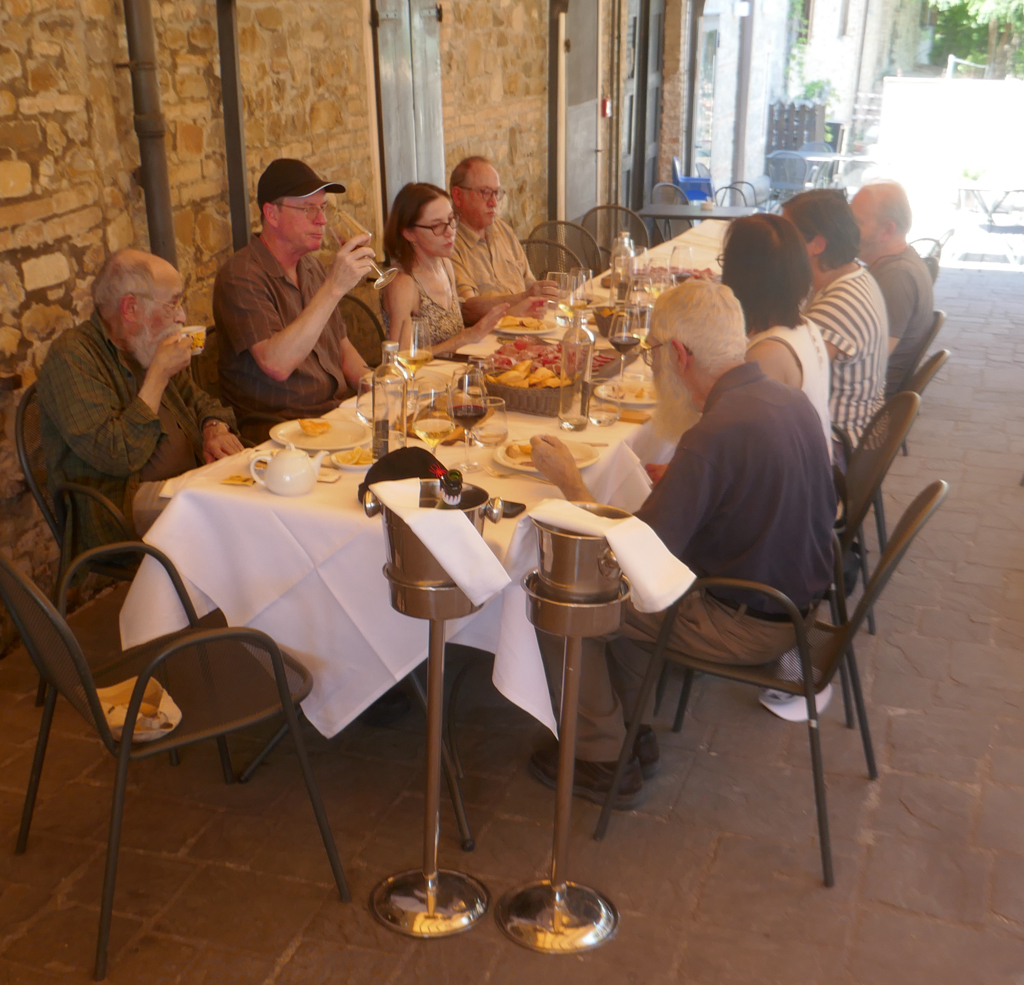 The drive from Langhirano to San Lazzaro di Savena, a suburb of Bologna, was hampered by several accidents on the E45 autostrada. Our destination in San Lazzaro di Savena was the Fondazione Cirulli, a collection of modernist Italian art and design accumulated by Massimo Cirulli. We began by viewing the current installations which included displays dedicated to designers Elio Fiorucci, Erberto Carboni, Bruno Munari, Xanti Schawinsky, and the magazine Natura. (The latter included mock-ups for covers and explorations of the logo.) We finished our visit by going downstairs where we had a chance to talk to Massimo Cirulli and get a behind-the-scenes look at more of his collection. 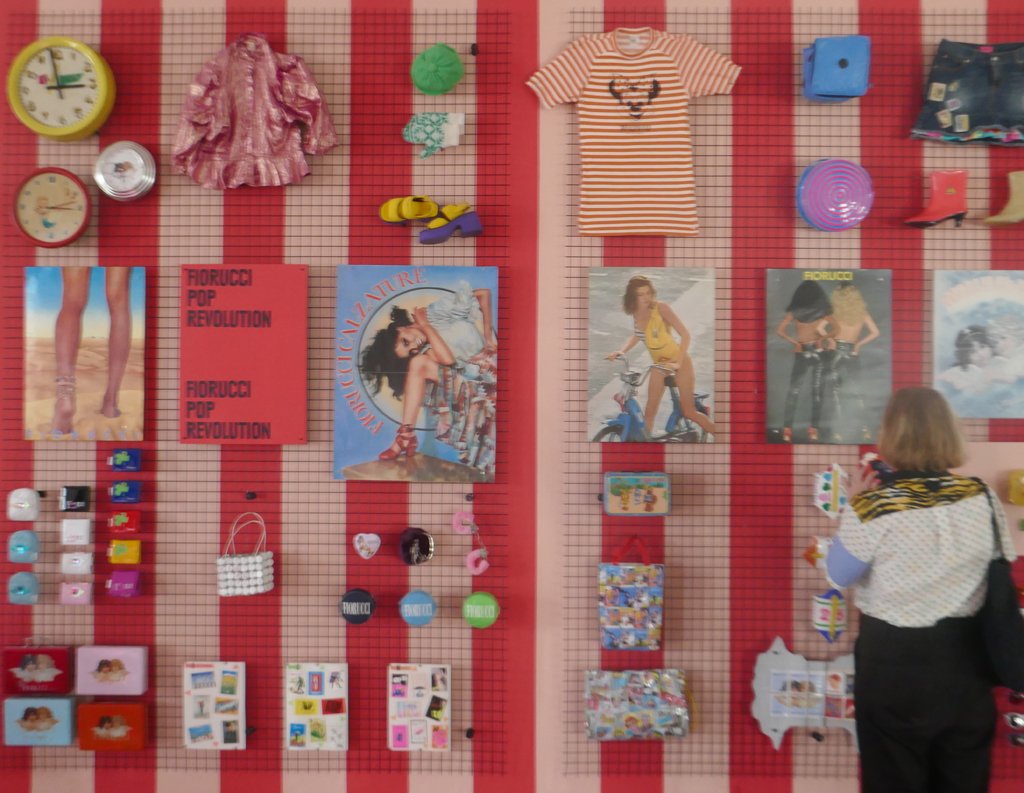 Angelina Lippert is examining the wall display dedicated to Fiorucci, the Italian fashion label founded in Milano in 1967 by Elio Fiorucci. 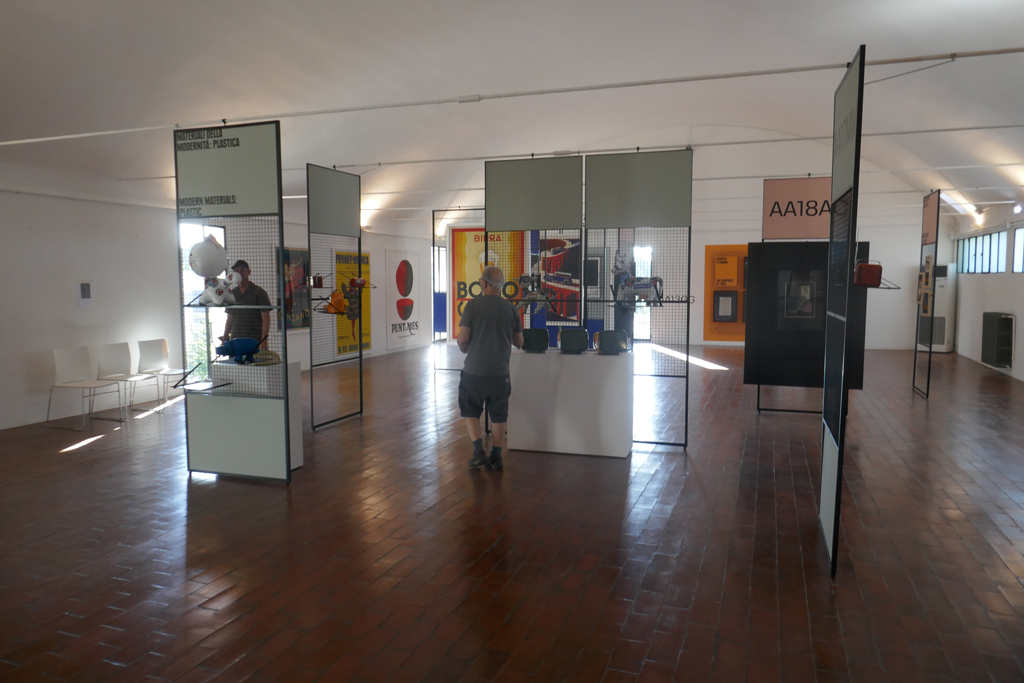 Massimo Cirulli (at far left) talking with members of Legacy of Letters.

Many of the Legacy of Letters participants were exhausted by the long day (and heat) and elected to return to Parma rather than have dinner in Bologna as planned. The handful of us that remained ate at Osteria del Cappello Rosso, a small but historic trattoria recommended by Vittoria Cirulli. The meal was not as fancy as others we have had, but nevertheless it was still delicious. 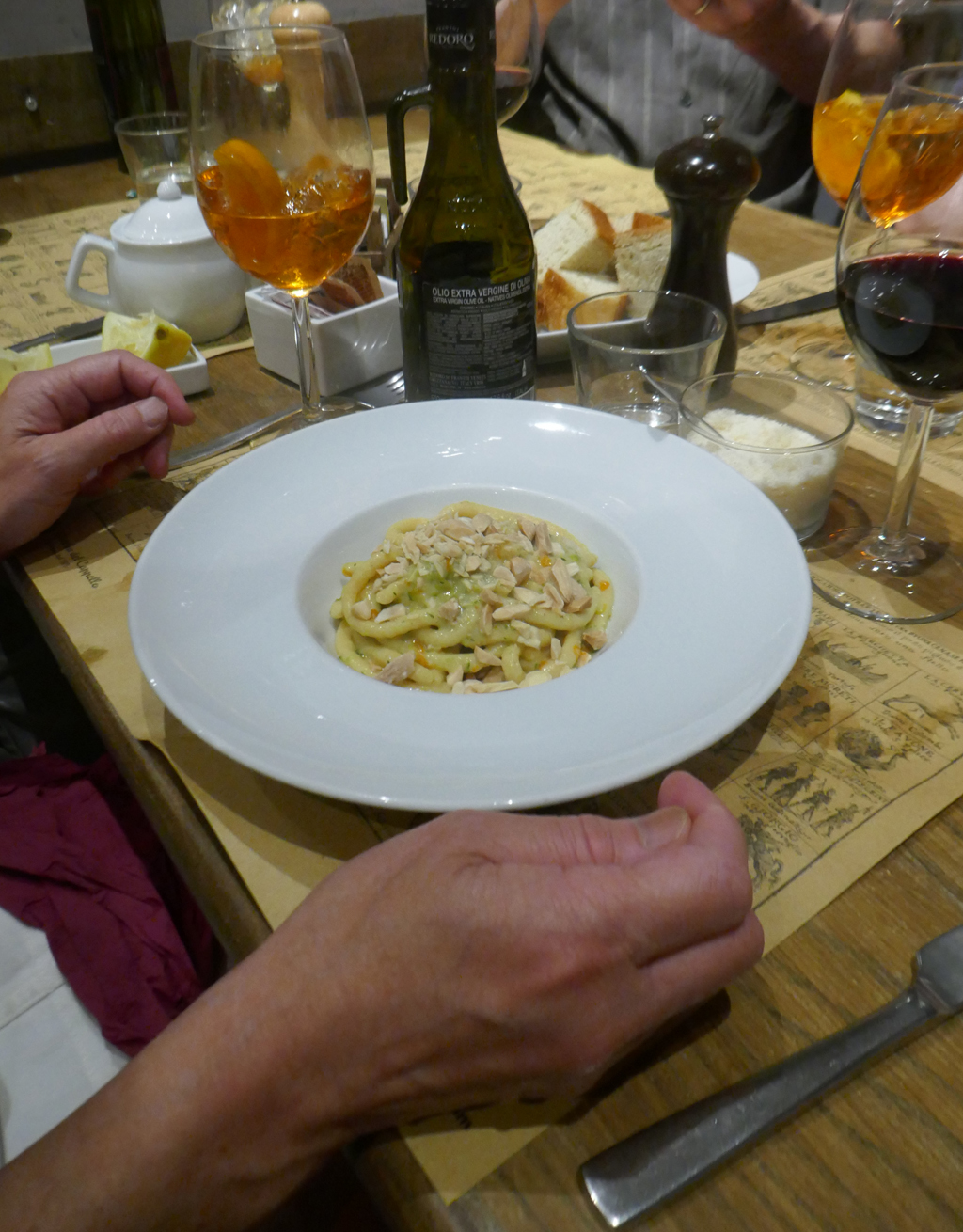 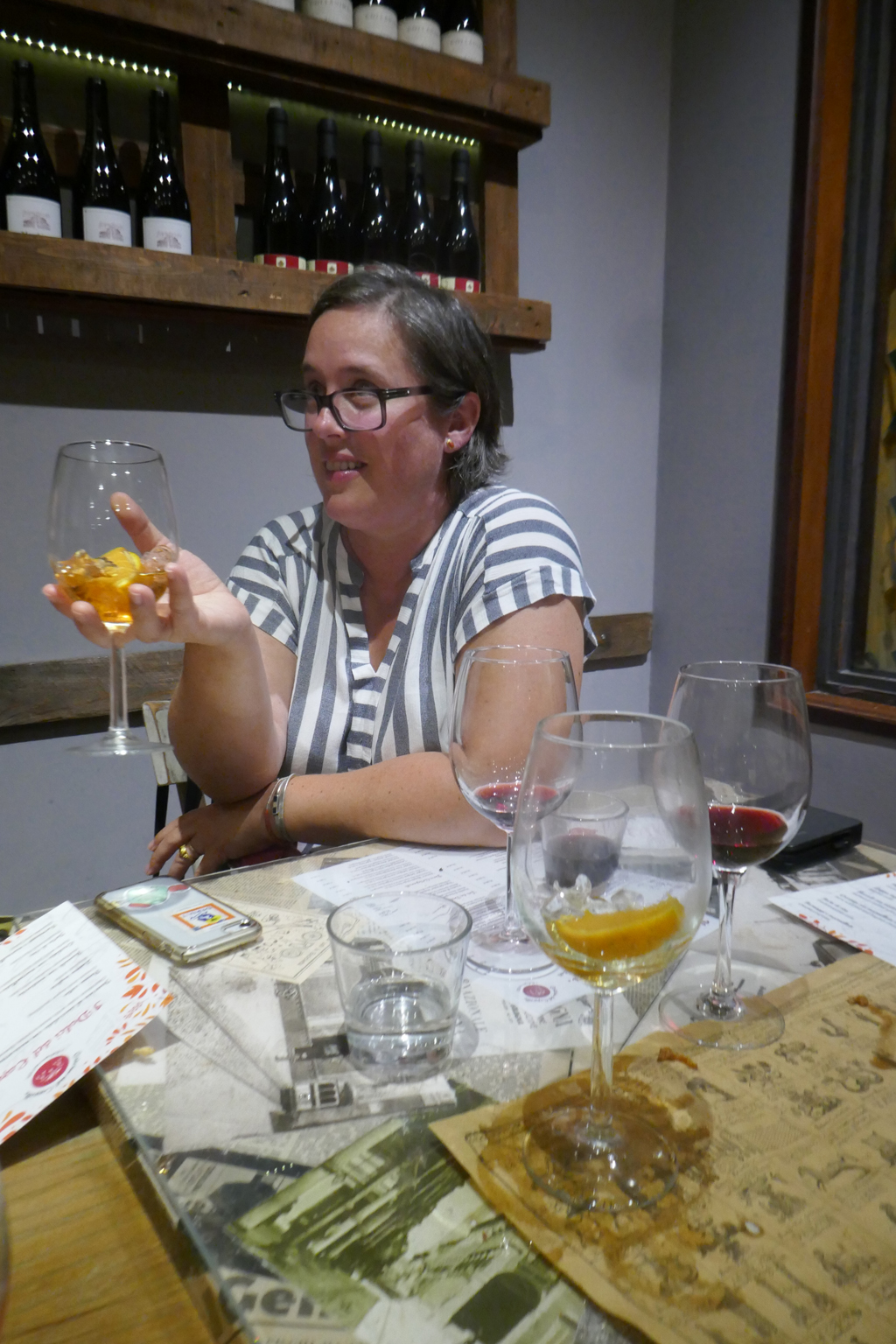