The second iteration of Tipo Cibo Vino, the 2022 Legacy of Letters tour and workshop, was originally scheduled to take place in 2020. Those plans were derailed by the pandemic. But the excitement of the first Tipo Cibo Vino was so strong that nearly everyone who signed up for 2020 was able to be a part of 2022. Although Italy was undergoing a severe drought and the temperature was much hotter than in 2019, the tour and workshop were still a big success. The twelve participants had a great time touring cultural and gastronomic sites in the Veneto and Emilia-Romagna, working collaboratively on a letterpress book at the Tipoteca under the guidance of Peter Kruty and Sayre Gaydos of Peter Kruty Editions, and then finishing things off with cooking and beverage lessons from Cristina Colle and Mauro Drago of Le Corderie restaurant.

Tipo Cibo Vino 2022 was organized by me with the assistance of graphic designer Patricia Childers and Sandro Berra, the director of the Tipoteca.

Here is the first installment of a day-by-day visual account of Tipo Cibo Vino 2022. (All photographs, unless otherwise indicated, are by me and are copyright Legacy of Letters.)

Orientation for Legacy of Letters Tipo Cibo Vino 2022 took place on the patio at the Villa Bolzonello, our longtime home during our workshops at the Tipoteca. The introduction to the tour and workshop was accompanied by bottles of Villa Bolzonello’s own prosecco and cheeses from La Casearia Carpenedo. 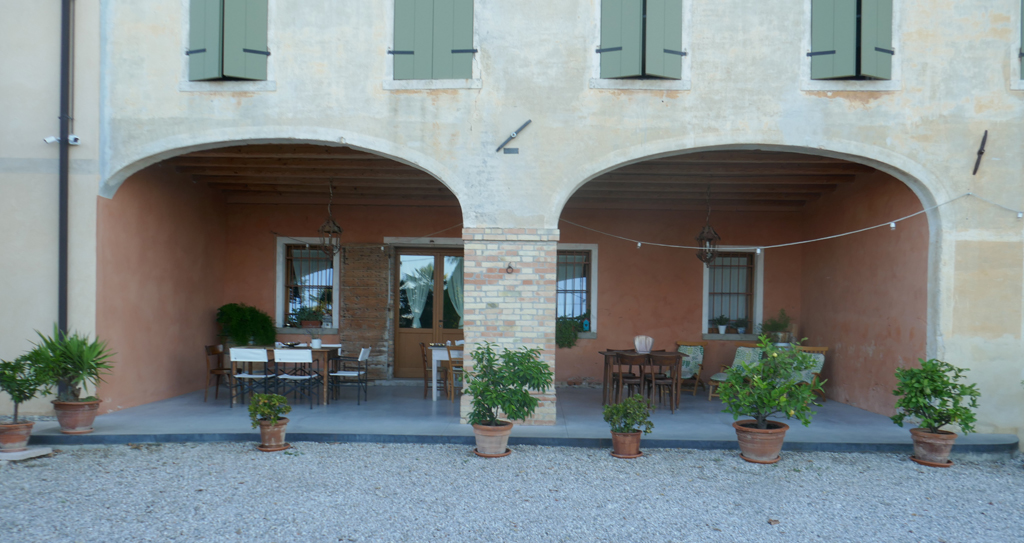 Afterwards we walked to Antica Osteria Guarnier across the border in Crocetto del Montello for dinner. In the summertime Guarnier serves its meals outdoors in a grove of trees across the street from its main dining room. The osteria specializes in grilled items: steaks, pork chops, sausages, polenta, and vegetables. Beer—especially Ichnusa on draft—is the preferred drink to have with such hearty food. 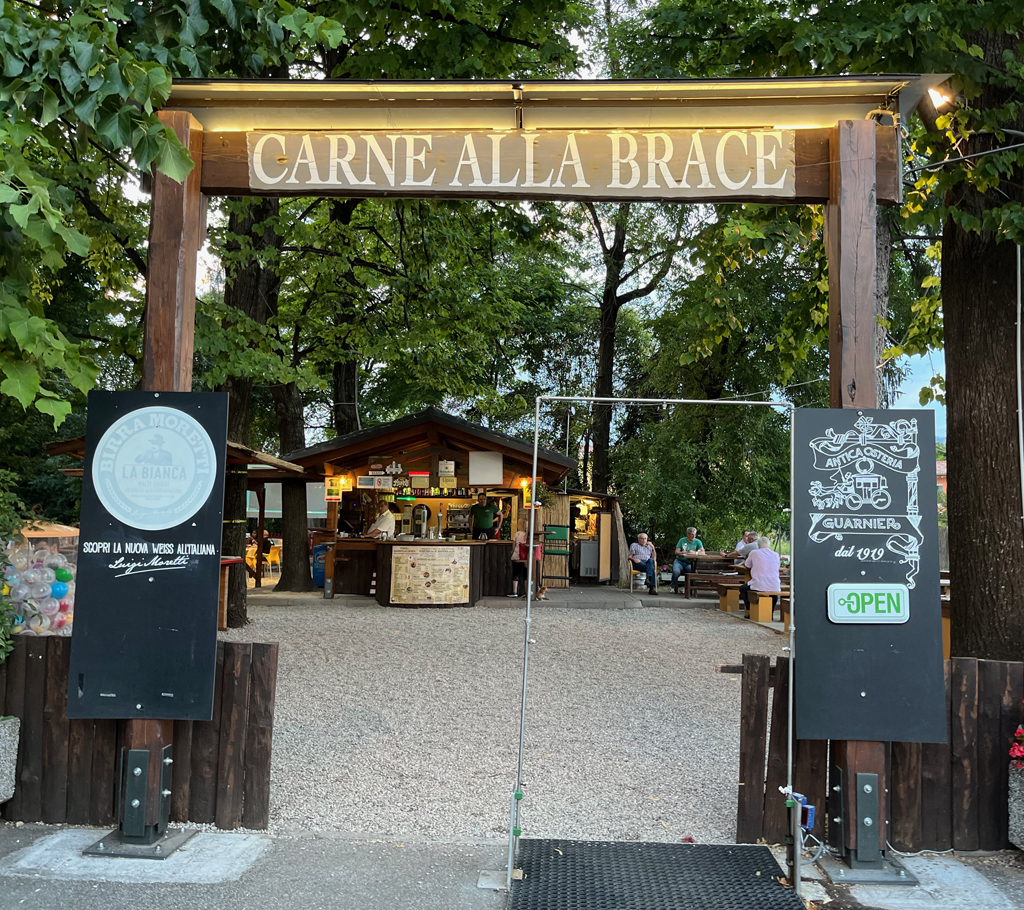 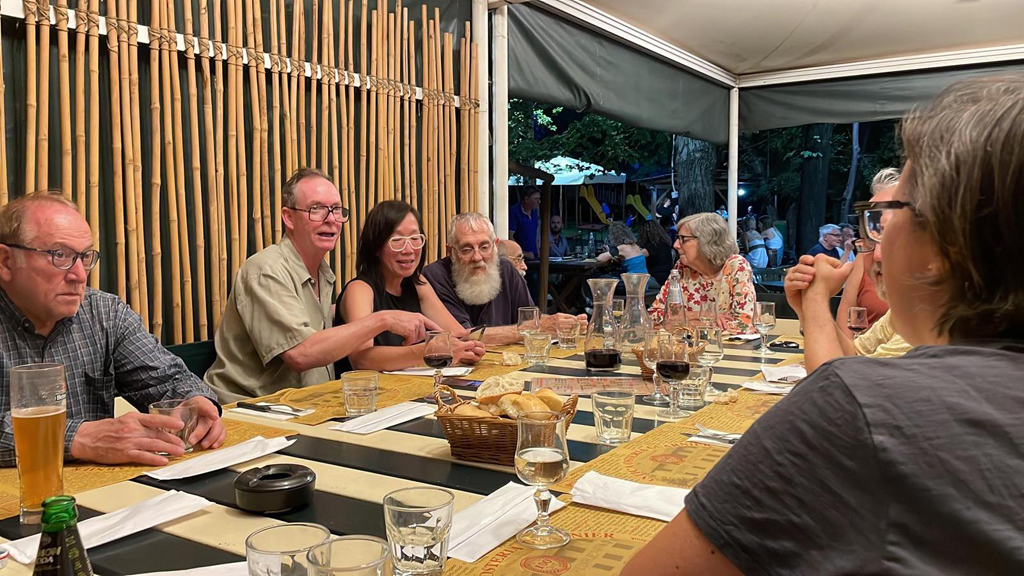 Our first stop on the touring portion of Legacy of Letters Tipo Cibo Vino 2022 was Padua where we visited the Biblioteca Seminario del Vescovile to see manuscripts and incunabula. Dott.ssa Giovanna Bergantino arranged everything neatly for us, enabling us to easily look at more than one item at a time and make comparisons. Among the items we saw were a large, two-volume illuminated Bible copied by the Benedictine nun Agnese Scarabela in 1297 (signed on f. 193v), described by Davide Tramarin as “currently the oldest codex in Italy written by a woman”; six Renaissance Humanist manuscripts, including ones by Poggio Bracciolini and the well-known scribes Bartolomeo Sanvito and Antonio Sinibaldi; two incunabula printed by Nicolas Jenson (on in roman type and one in rotunda type); and a copy of the Nuremberg Chronicle.

After our visit to the Biblioteca Seminario del Vescovile we walked to the Cappella degli Scrovegni to see Giotto’s frescoes, considered to mark a revolution in the history of Western painting. 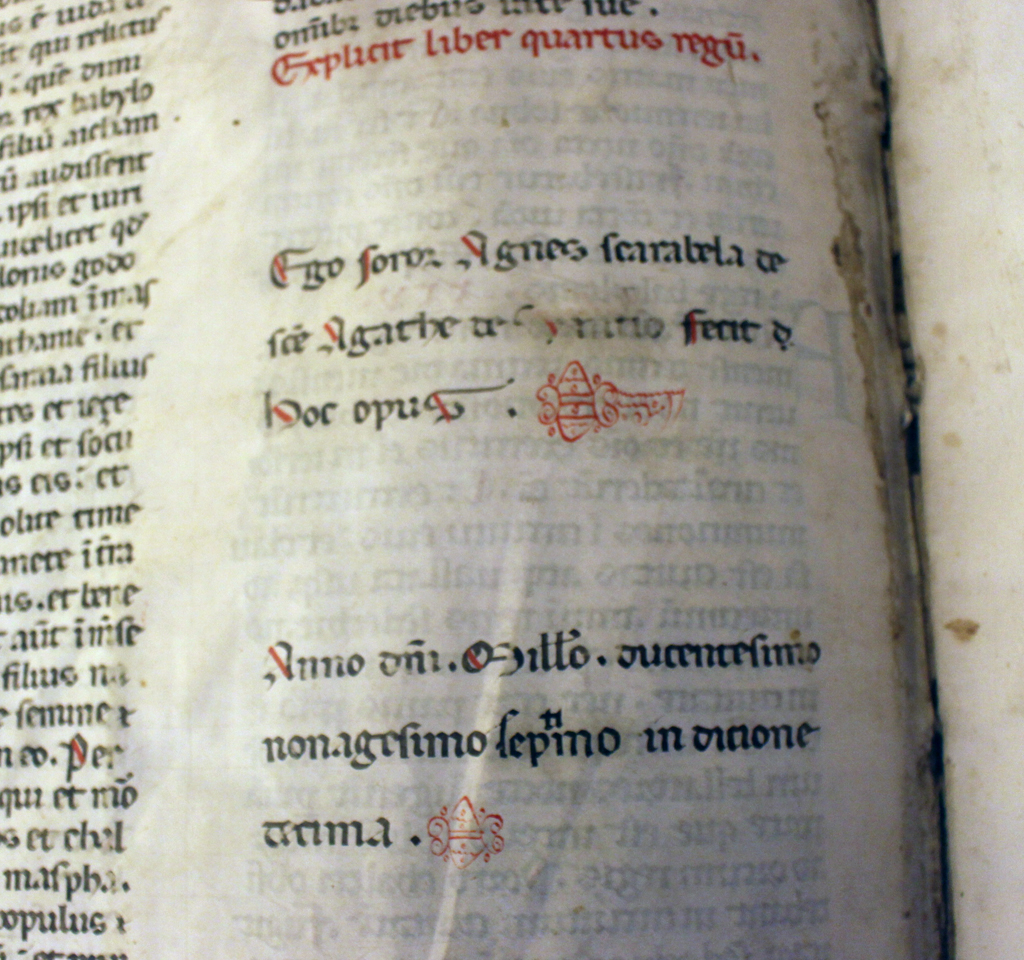 Detail of the colophon (f. 193v) from the 1297 Bible (Biblia Sacra Ms. 532, Biblioteca Seminario del Vescovile, Padua) written out by Suor Agnes Scarabela. Her name is visible above the red ornament. 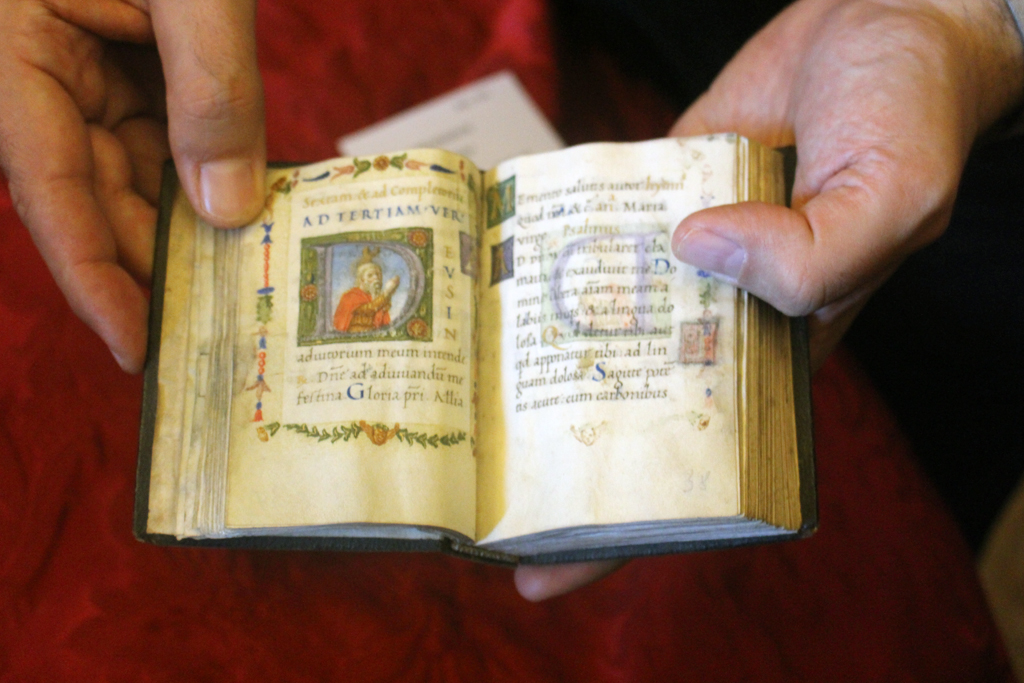 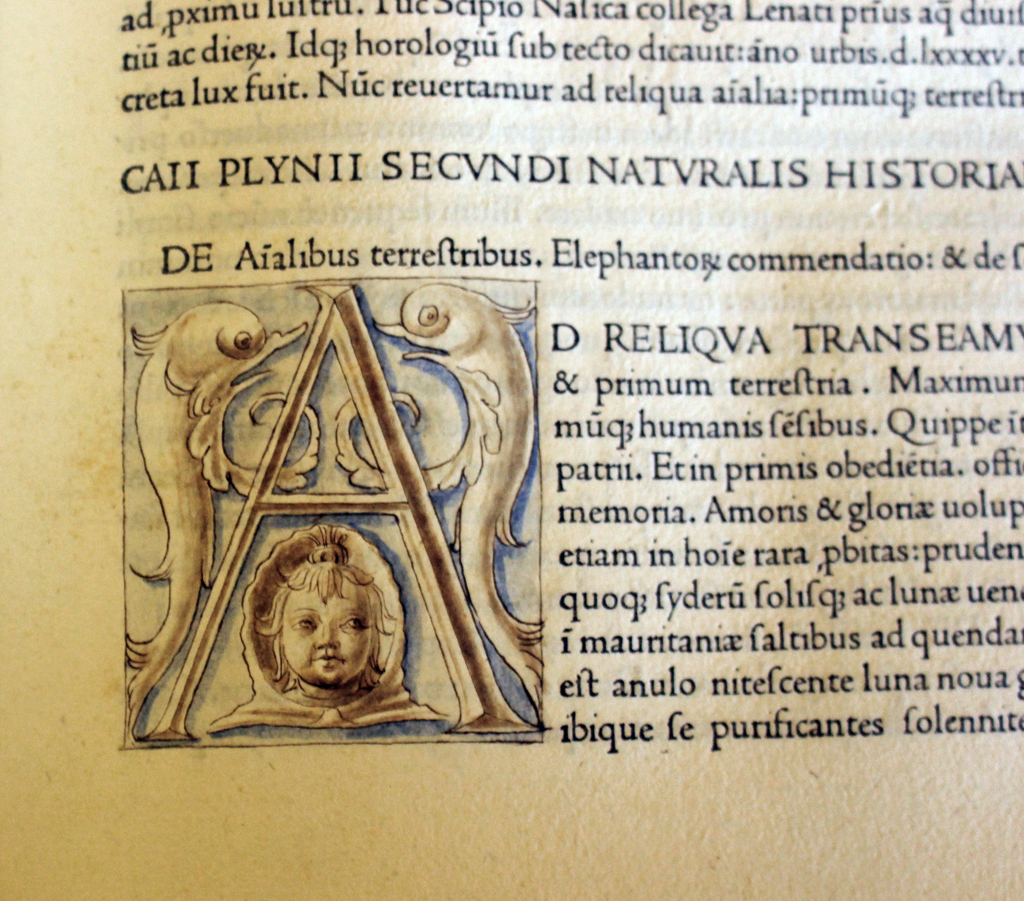 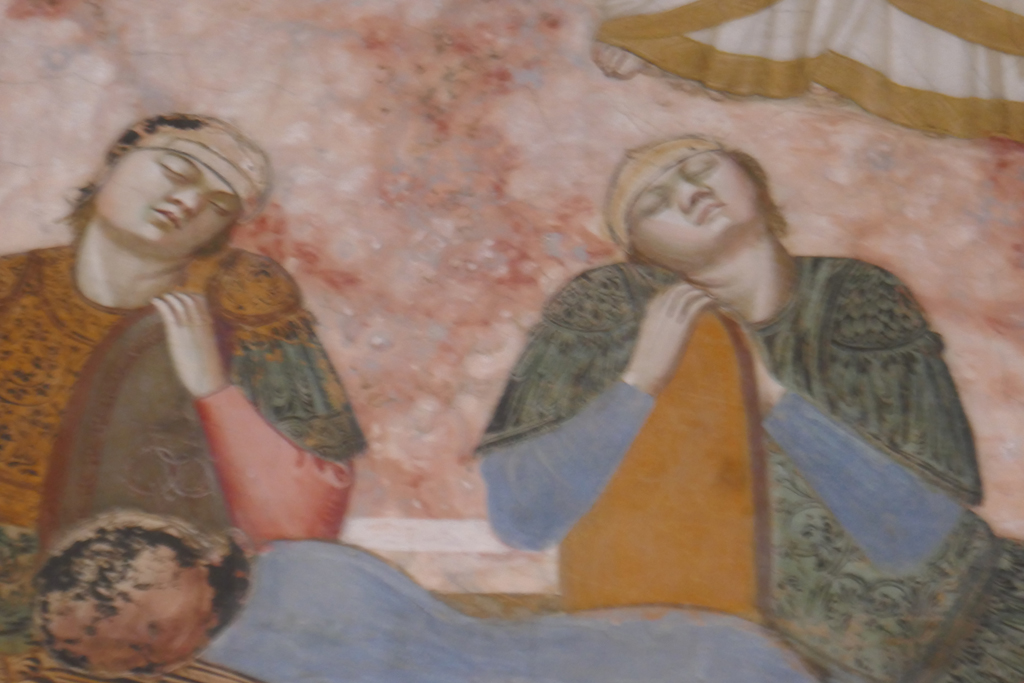 Detail of fresco by Giotto in the Cappella degli Scrovegni in Padua. 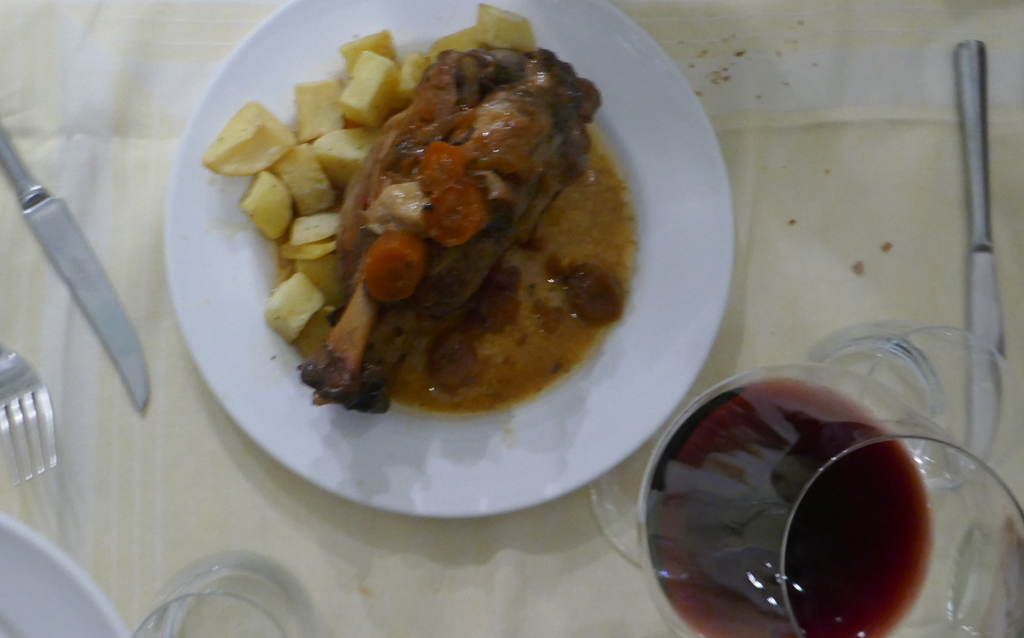 After lunch we took a short train ride from Padua to Treviso where we visited the Museo Nazionale Collezione Salce in its new home in the former church of Santa Margherita. Director Dott.ssa Valeria Arena arranged a private tour of the retrieval and delivery room for us followed by a special showing of nearly fifty Italian posters commissioned by manufacturers of food and alcohol. We were also able to view the current exhibition devoted to bicycle posters. As a bonus, Dott.ssa Arena’s staff took us to the museum’s original home in the former church of San Gaetano to see a small exhibition of enamel “posters”. 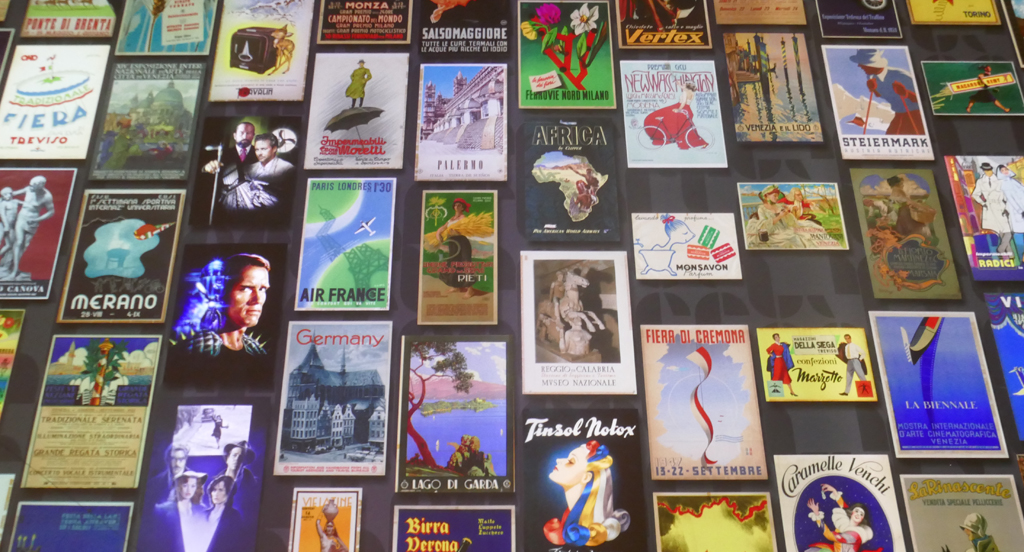 Detail of wall screen at the Museo Nazionale Collezione Salce in Treviso. The screen displays a constantly moving array of Italian posters. 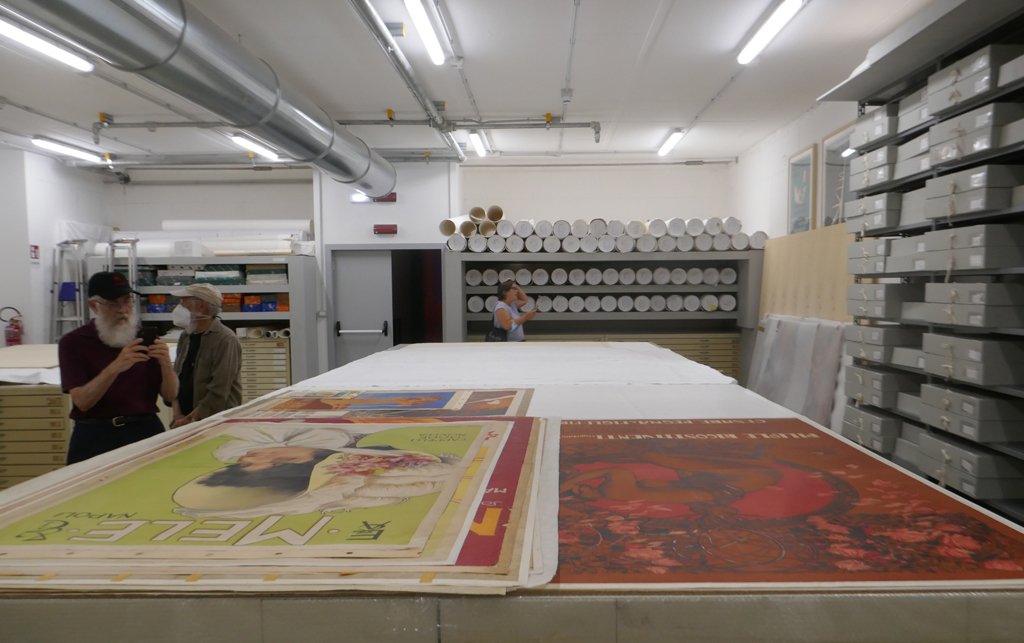 Richard Waller, George Whitman, and Sayre Gaydos getting a behind the scenes tour of the poster retrieval and delivery room at the Museo Nazionale Collezione Salce in Treviso. 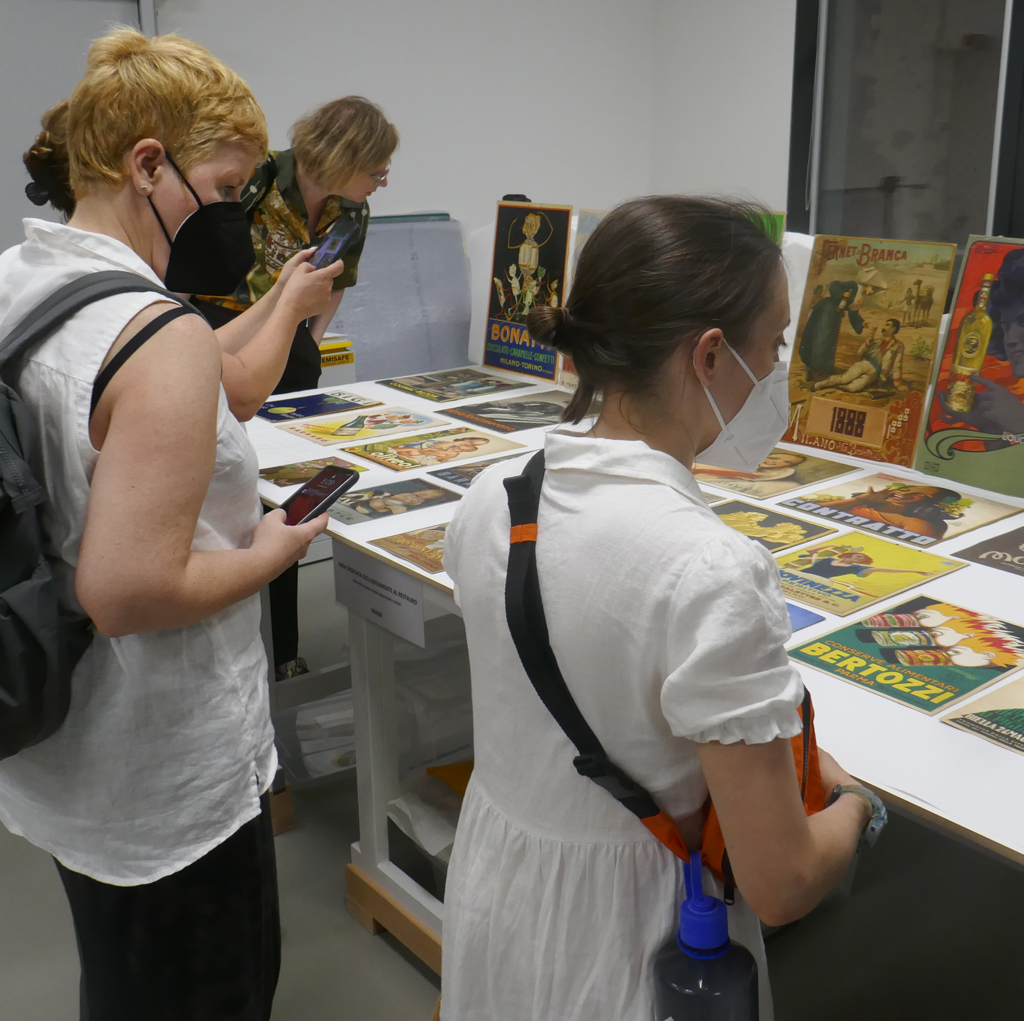 In the morning we visited the Fondazione Cini on the Isola di San Giorgio Maggiore (across the water from San Marco) where curators Ilenia Maschietto and Alessandro Martoni once again presented an array of manuscripts and incunabula for us to examine and enjoy. Several items were new this year, including Aesopus moralisatus (Verona: Giovanni and Alberto Alvise, 1479), the first book printed with cast metal fleurons, and a unique copy of De re militari by Roberto Valturio (Verona: Giovanni di Nicoló, 1472), owned and annotated by Melchior von Frundsberg, the son of Georg von Frundsberg who led German Landsknechte troops during the Sack of Rome in 1527.

The remainder of the day was free with no organized activities. Some members of Legacy of Letters Tipo Cibo Vino visited the Peggy Guggenheim Collection, others the Venice Biennale, and some—like myself—simply wandered about La Serenissima, as the Republic of Venice was nicknamed centuries ago. At the end of the day we stayed on the Isola di San Giorgio Maggiore, spending the night at the Centro Branca, the residence for scholars at the Fondazione Cini. It was the perfect place to escape from the crowds in Venice. 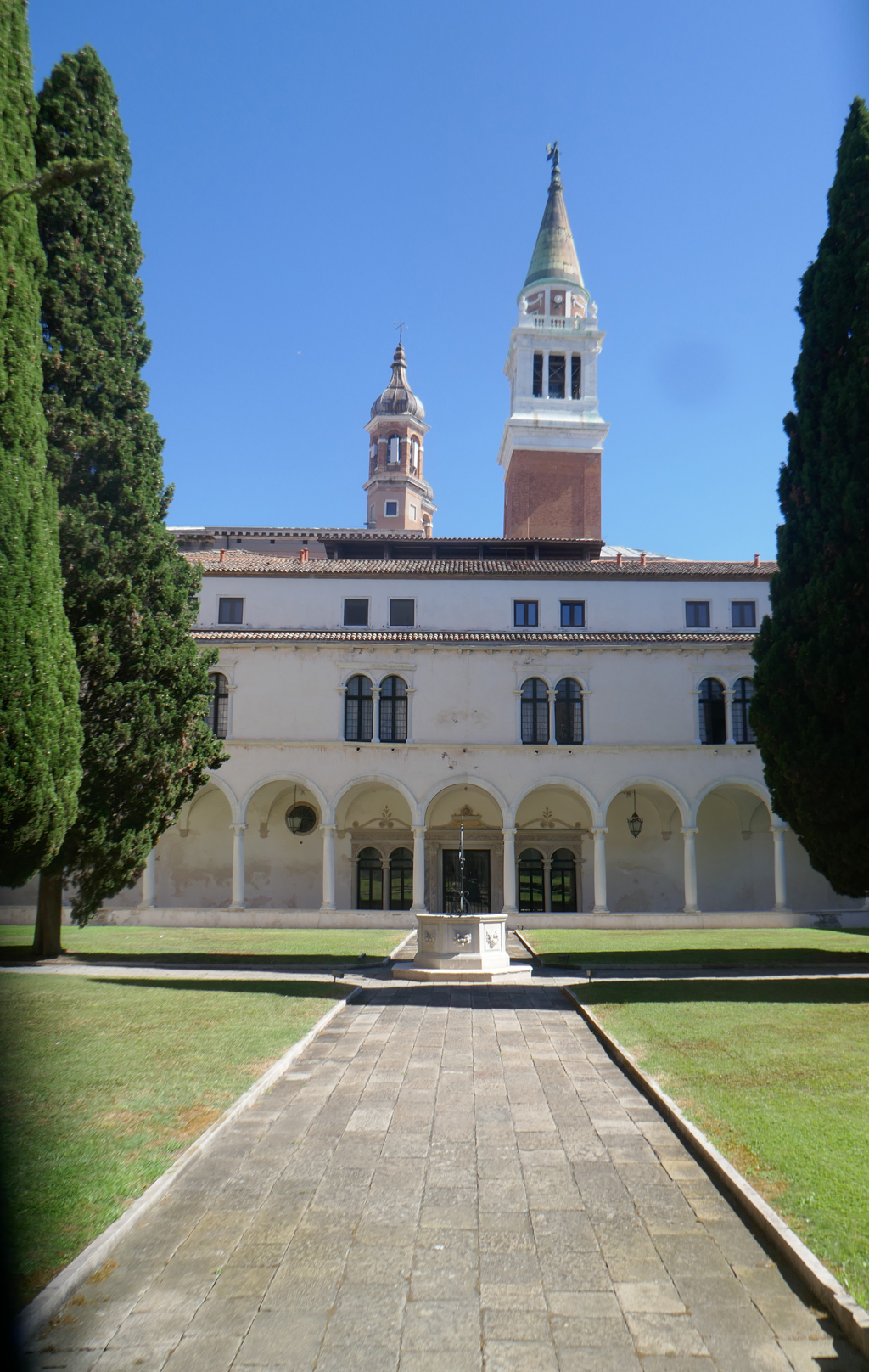 Courtyard of the Fondazione Cini in Venice. 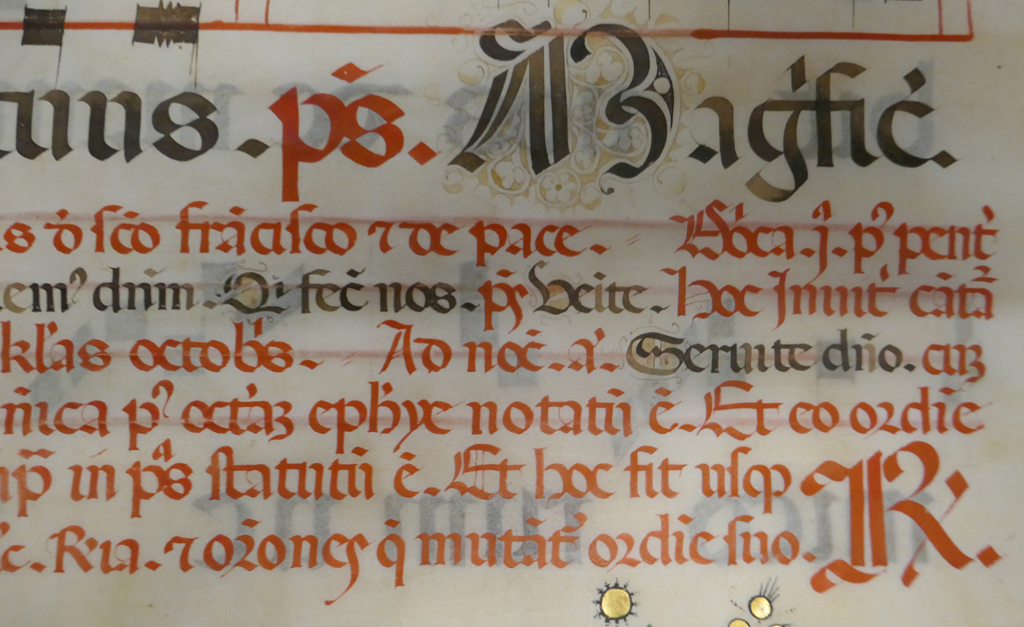 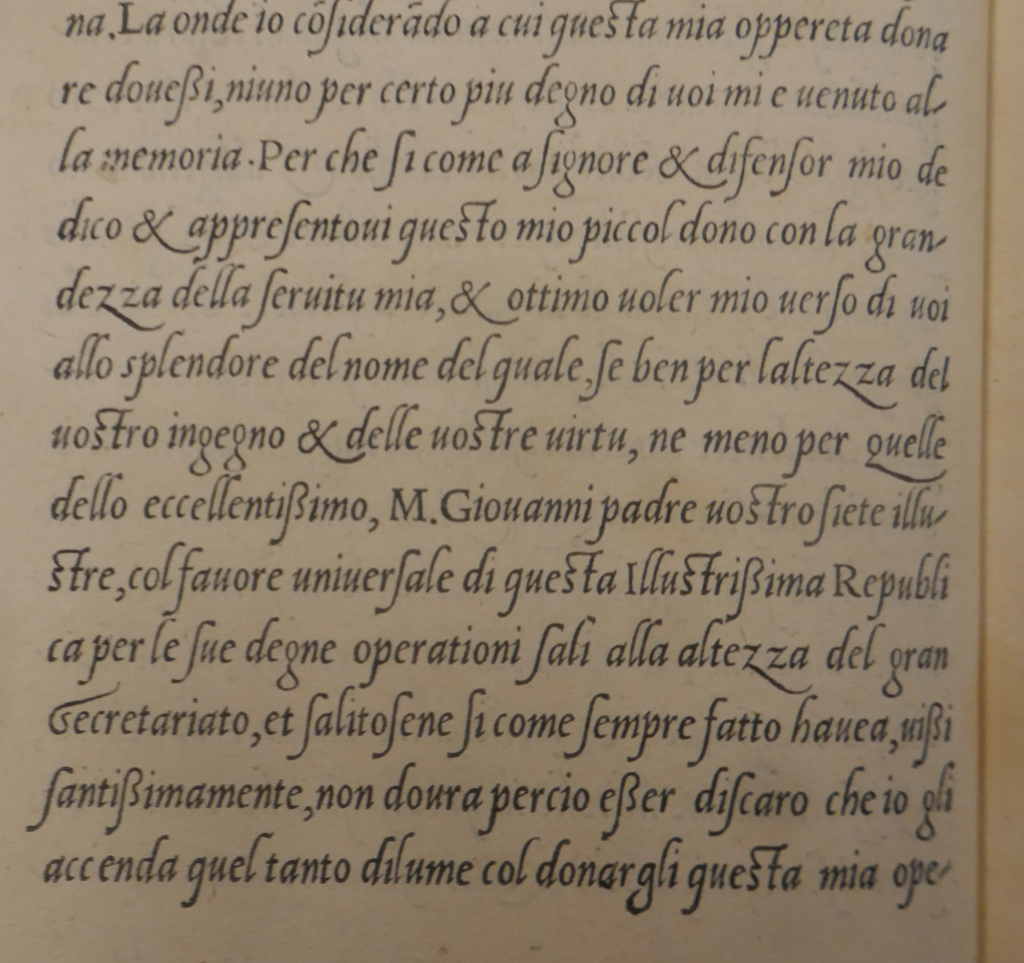 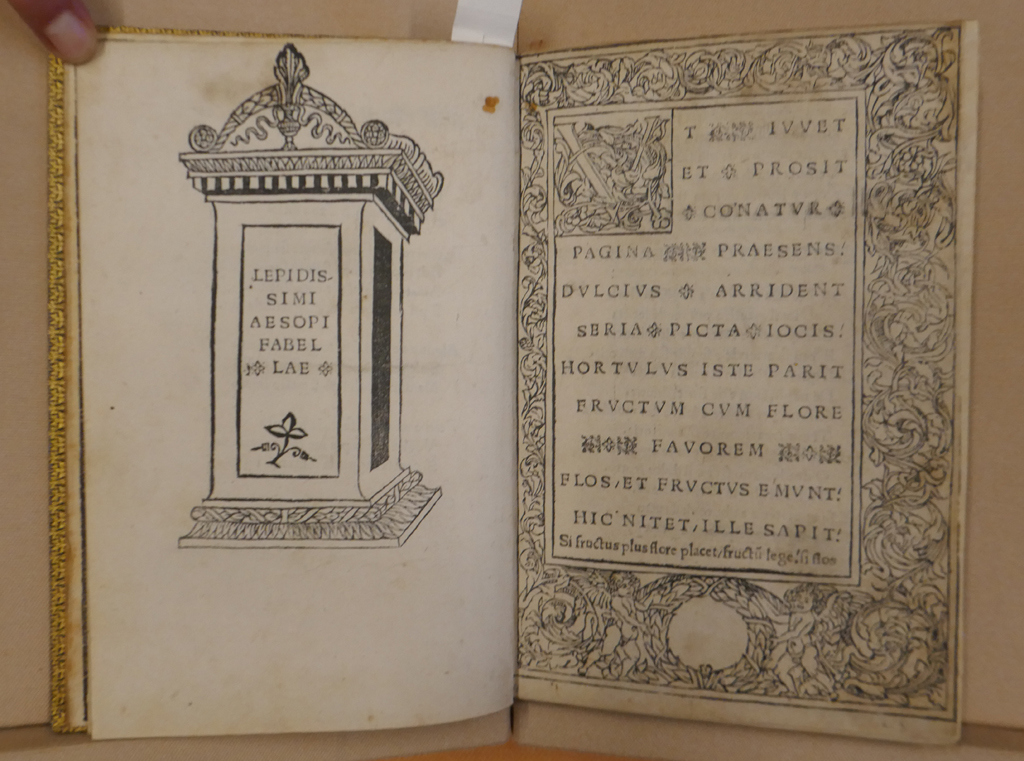 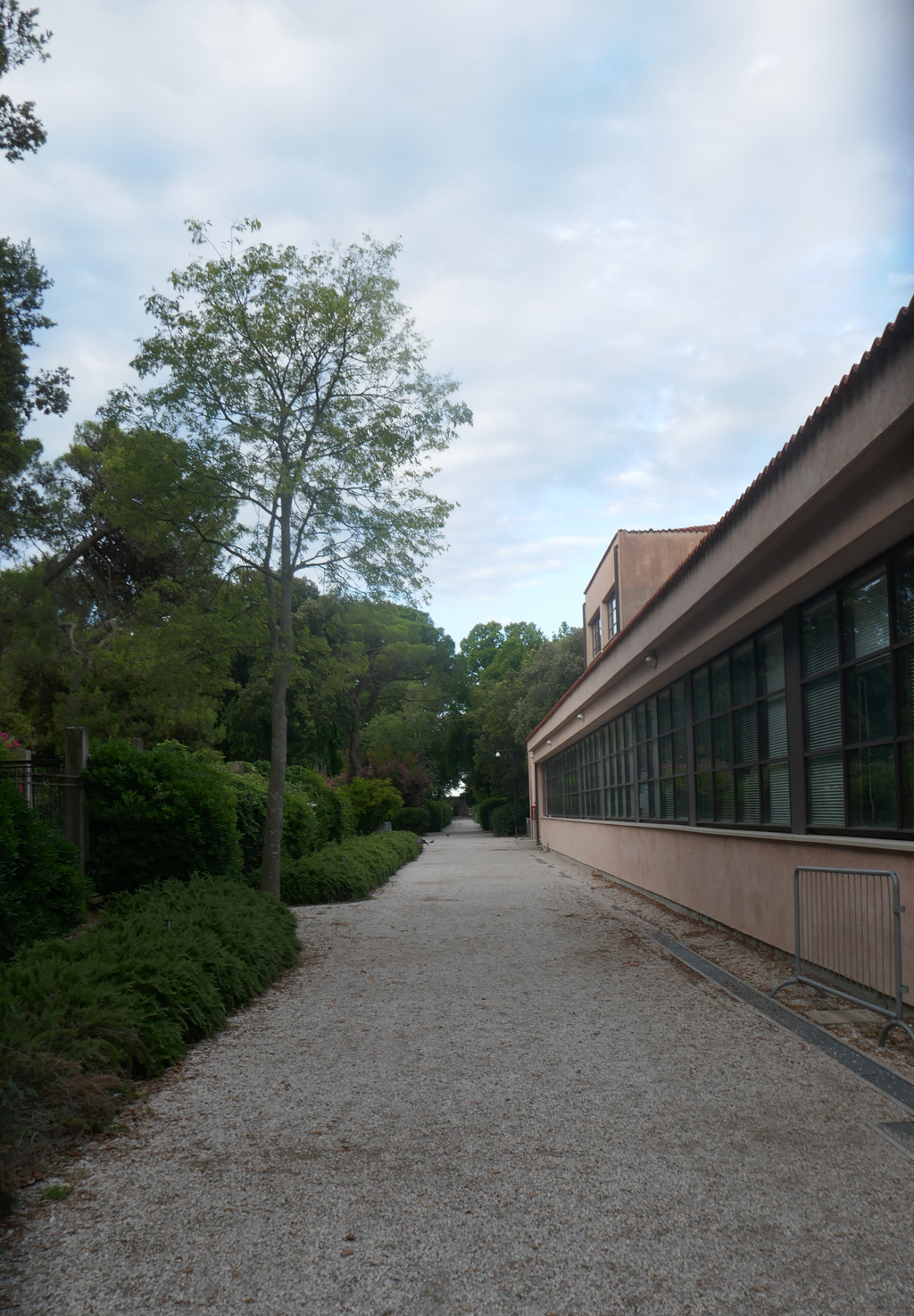 Exterior of the Centro Branca, located on the Isola di San Giorgio, Venice.