What you will learn at CalRBS History of Type in August 2022—no. 50

THEME
Legacy of Letters was founded in 1996 with the goal of introducing people to the incredibly rich array of resources that Italy has to offer for those excited about carved, written, and printed letters. Although the Tipo Cibo Vino theme of 2019 and 2022 was extremely successful it is time to reemphasize this original vision. Thus, the 2023 edition of Legacy of Letters will focus on type and printing with visits to five letterpress print shops (and possibly one silkscreen printer). There will also be trips to five or six libraries to see examples of outstanding calligraphy, typography, and printing from the Renaissance to the 20th century. Legacy of Letters 2023 will conclude with a four-day letterpress workshop at the Tipoteca in Cornuda led by master printers Peter Kruty and Sayre Gaydos of Peter Kruty Editions.

ITINERARY
*The exact dates for Legacy of Letters 2023 have yet to be determined, but it will take place at the end of June and beginning of July. The preliminary itinerary is as follows:

WORKSHOP
There will be four full days devoted to the letterpress workshop at the Tipoteca. As with Legacy of Letters in 2019 and 2022 the workshop will be led by Peter Kruty and Sayre Gaydos of Peter Kruty Editions. The theme of the 2023 project will be Italian printing and type terms and their translation into English.

EXPERIENCE
No prior experience or background in letterpress printing or typography is required to join Legacy of Letters 2023. Legacy of Letters has always welcomed anyone with an interest in calligraphy, lettering, epigraphy, signage, typography, type design, graphic design, printing, or art to take part in its tours and workshops.

PETER KRUTY EDITIONS
Peter Kruty and Sayre Gaydos are co-owners of Peter Kruty Editions, an award-winning letterpress workshop dedicated to both artist collaborations and commercial printing. The studio, located in the Sunset Park neighborhood of Brooklyn, has been featured on public television and cable television and even had a cameo role in a Miramax film. Recent projects include a gift book for His Holiness Pope Francis, a book with photographer Neil Selkirk, and letterpress contributions to a portfolio of prints by artist Ken Buhler. 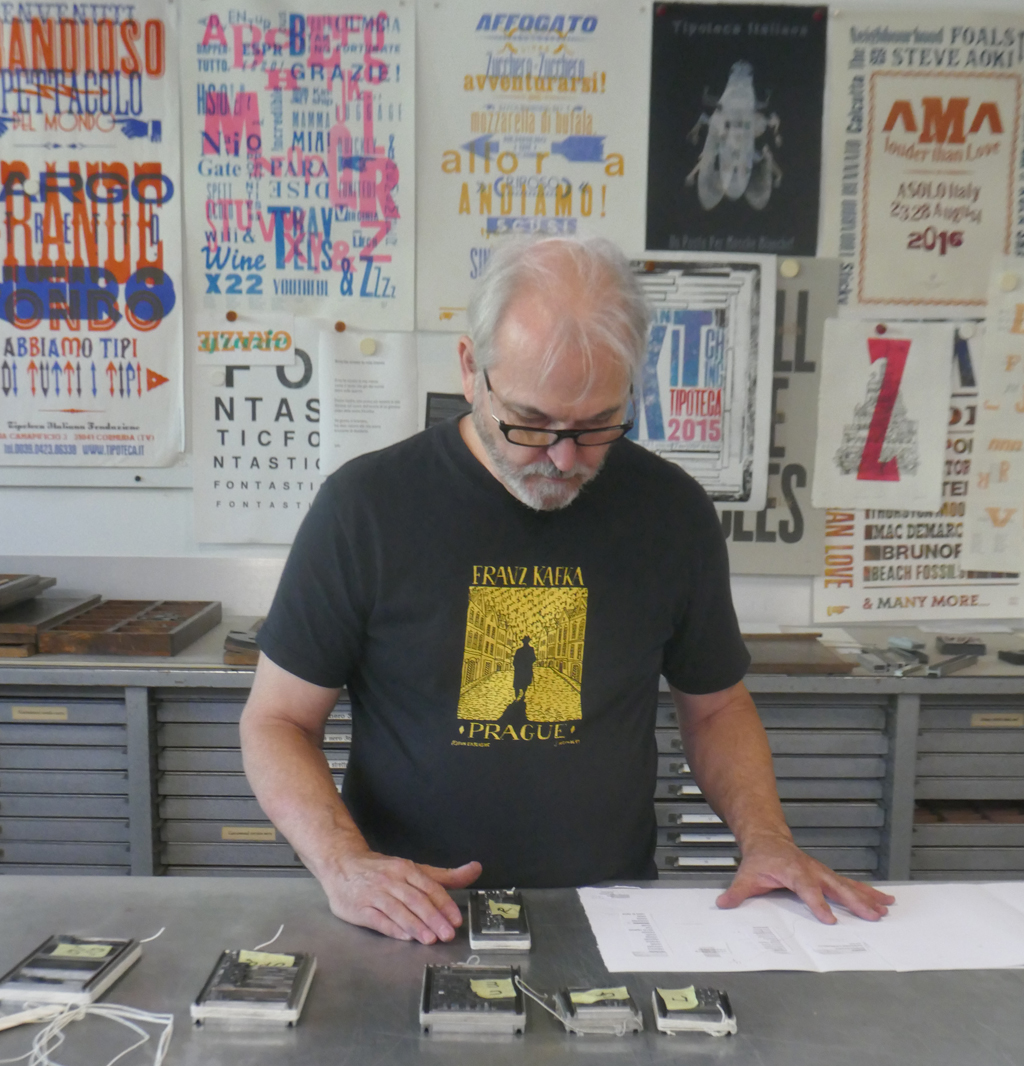 Peter Kruty checking galleys during Legacy of Letters 2022 at the Tipoteca.

Peter Kruty
Peter, who teaches at the University of the Arts in Philadelphia, is a master printer with nearly 30 years experience. He is best known for his innovative printing of books for acclaimed contemporary artists and writers, among them Lesley Dill, Walton Ford, Susan Gosin with Dieu Donne Press, Eliza Kentridge, Louise Lawler, Mikhail Magaril, and Mark Strand. He studied letterpress printing at the University of Alabama under Richard-Gabriel Rummonds, the legendary proprietor of The Plain Wrapper Press in Verona, Italy. Upon graduation he moved to New York to work with Judith Solodkin at Solo Press, a studio that specialized in artist’s prints and books. In 1990 he established Peter Kruty Editions in Soho.

Peter teaches letterpress printing at Pratt Institute. He has taught letterpress printing workshops throughout the United States, including at the University of the Arts in Philadelphia, Columbia College in Chicago, the Minnesota Center for Book Arts, The Center for Book Arts in New York, Pyramid Atlantic in Washington, DC and the Penland School of Crafts in North Carolina.

Sayre Gaydos
Sayre specializes in unique bookbinding and book structures. She studied book arts at the University of the Arts in Philadelphia. Sayre joined Peter Kruty Editions in 1996. She oversees the commercial aspect of the business, often designing items for clients as well as handling the printing. Sayre taught bookbinding at the Fashion Institute of Technology for a number of years. 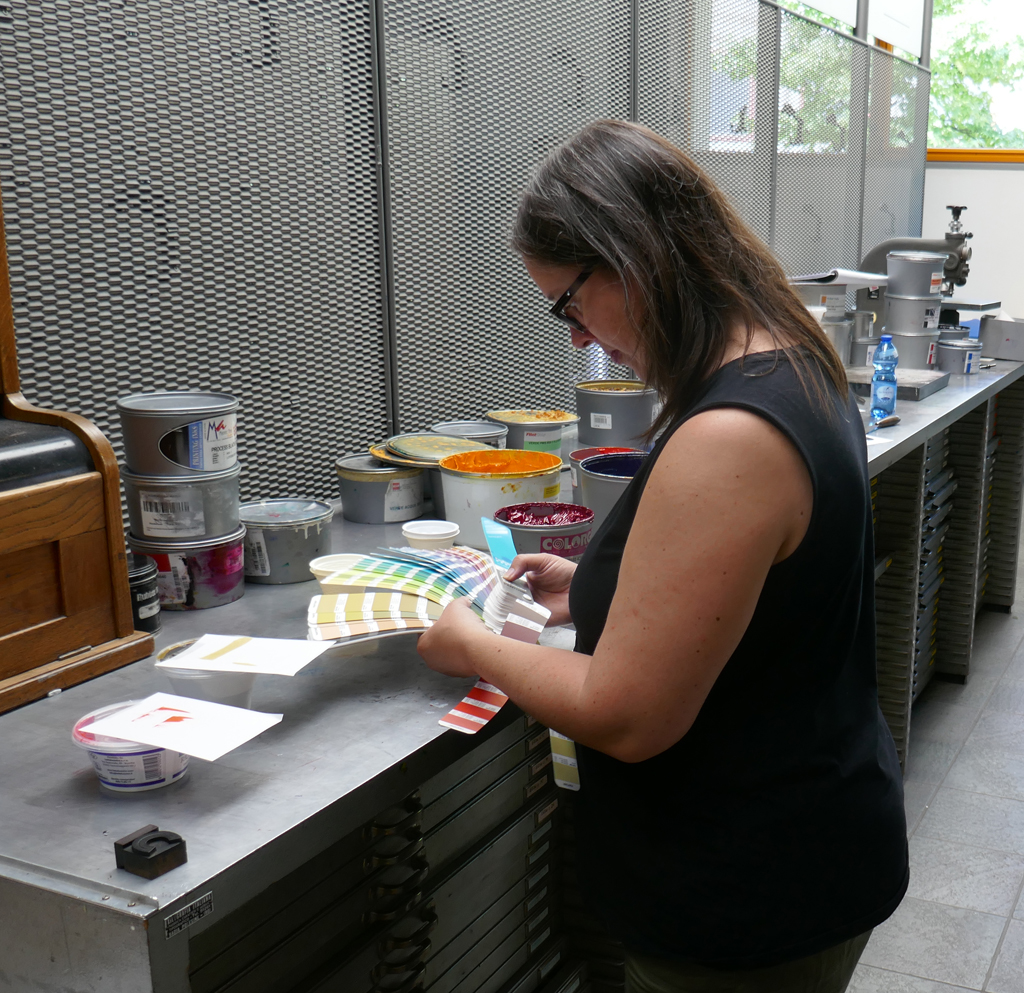 Sayre Gaydos choosing ink colors during Legacy of Letters 2022 at the Tipoteca.

Printing equipment on display at the Tipoteca. Photograph by David Wolske (2013).

TIPOTECA ITALIANA FONDAZIONE
The letterpress workshop will be held at the Tipoteca Italiana Fondazione, a printing museum acclaimed for the depth and quality of its array of equipment, tools and documentary material—and also for the beauty of its installation. Among its holdings are handpresses by Amos Dell’Orto, a Rogers Typograph, a Benton punchcutting machine, punches by the Amoretti (former colleagues of Giambattista Bodoni), patterns for typefaces by Aldo Novarese, the Luigi Melchiori wood type archive, Bodoni’s Manuale Tipografico (1818), type specimens from Fonderia Reggiani and Fonderia Nebiolo, issues of Il Risorgimento Grafico(1902–1936) and Campo Grafico (1933–1939), and much more. 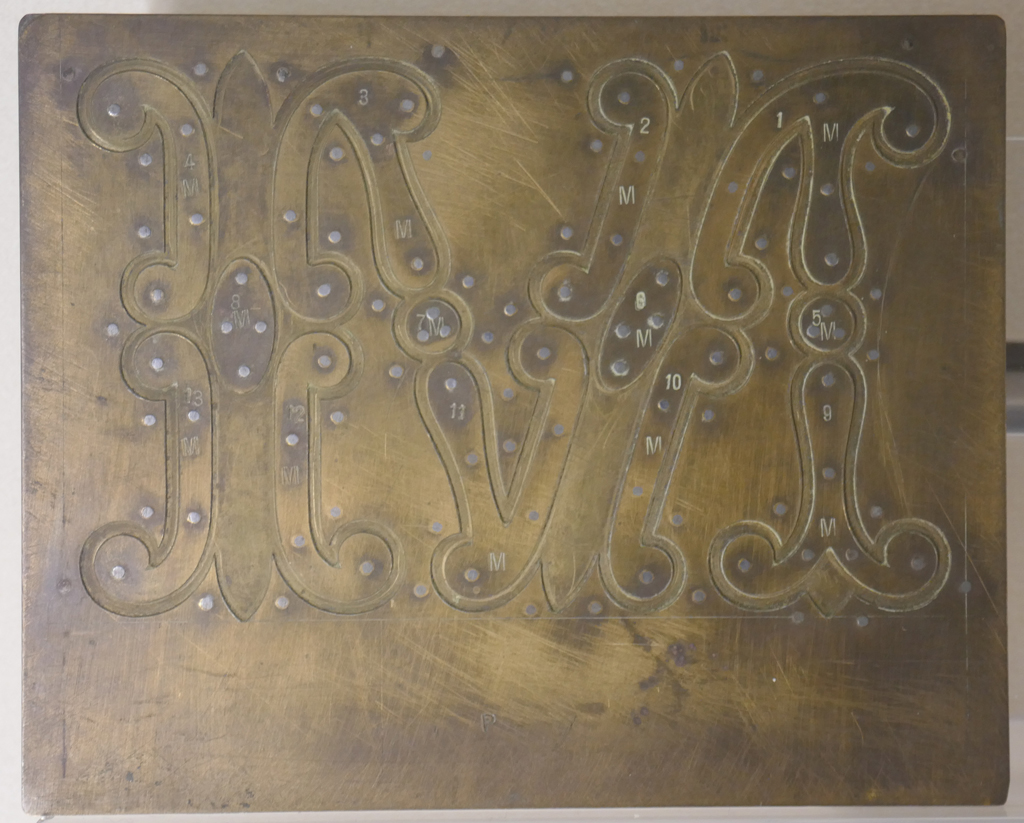 Most importantly for the purposes of the Tipo Cibo Vino workshop, the Tipoteca has a rich collection of Italian type in both wood and metal. Many of the metal types—such as Quirinus, Fluidum, Landi, Fontanesi, Estro and Slogan—are little known outside of Italy. Among the wood types are several Art Nouveau and Art Deco designs.

Sandro Berra
Sandro, a former Classics student turned “typemaniac” (one word!), is the coordinating director of the Tipoteca. He edited A story of character: ten years of Tipoteca Italiana (2006) and is co-editor of the journal Tipoitalia. 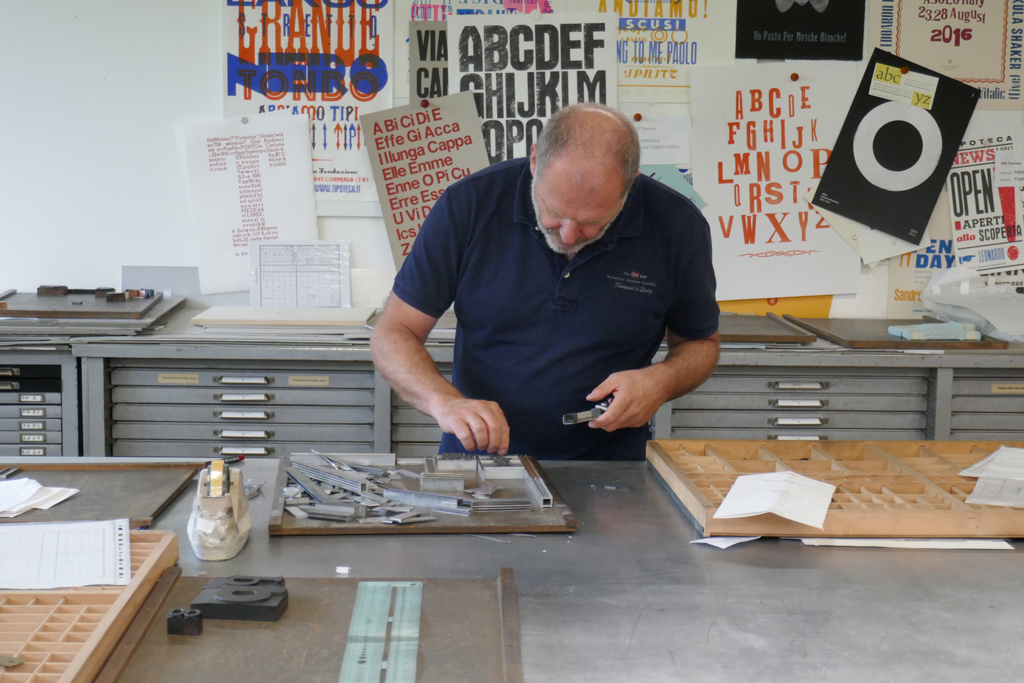 Sandro Berra setting type during Legacy of Letters 2019 at the Tipoteca.

CIBO E VINODespite the return to an emphasis on type and printing, there will be plenty of excellent food and wine during Legacy of Letters 2023. There are a number of great restaurants in Milano, Torino, Parma, Modena, Bologna, and Venice for participants to enjoy during the touring portion. Lunches during the letterpress workshop will take place at Le Corderie, an award-winning restaurant located across the street from the Tipoteca. Special meals will be planned for the orientation day dinner and the farewell dinner.

ACCOMMODATIONS
We will stay at 3- and 4-star hotels in Milano, Torino, and Parma; while in Venice, we will stay at the Centro Branca, located on the Isola di San Giorgio across from San Marco. During the letterpress workshop our base will be the Villa Bolzonello, an agroturismo that produces prosecco, in Cornuda. 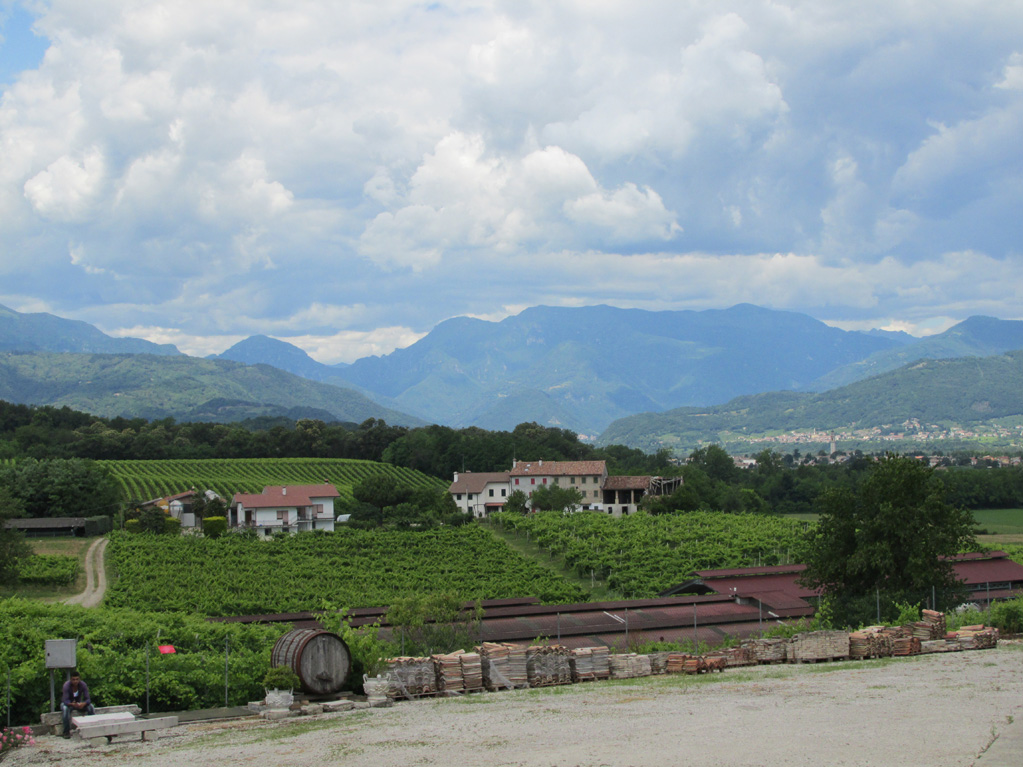 View of vineyards and the Prealpini from the back of the Villa Bolzonello. Photograph by David Wolske (2013).

TRANSPORTATION
Airfare is not included in the cost of Legacy of Letters 2023. Participants are expected to make their own travel arrangements to and from Italy. While in Italy we will travel around Lombardy and Emilia-Romagna in an air-conditioned private van. In the Veneto we will rely on a combination of the van and trains.

PRICES AND REGISTRATION
The full price of Legacy of Letters 2023 is $3900. There is a discounted price of $3650 for early bird registrants and former Legacy of Letters participants. A special price of $3500 is available for current university students or those who have graduated within the past two years.

The cost includes all transportation within Italy, all lodging, all breakfasts, the orientation and farewell dinners, all museum fees, and all workshop materials and supplies. All other meals are the responsibility of each participant as are the costs of any optional events.