The Definitive Dwiggins no. 133—The Parable of the Prodigal Son

The Definitive Dwiggins no. 130—Will Dwiggins, Publisher of Prints

possibly use letterhead to date had to be printed by The Heintzemann Press during his desk time there; and before he began having MP do his stationery

prints could have been printed at 3 places:
Guernsey Press in 1903 or 1904—unlikely since no mention in Tattler o Dwiggins & Rech info; and also he would have had to bring copies from Ohio to Massachusetts; and why would he accept Goudy offer?
but there is the proof on Guernsey manifesto reverse which indicates wood blocks might have been done in 1904 in Ohio
Village Press in 1904 or even 1905—very plausible for Sermons in Stones due to visual correlation with Good King Wenceslas and cut in wood; Parable printed there but nything else? maybe Revelations
WAD style became more elegant once he was using process engraving; and not working with Goudy—compare Parable
Heintzemann Press 1906—fits with Prodigal Son colophon

The Dwiggins list at Dartmouth mentioned in that post, only includes the three woodcuts. Dwiggins promised they would “be ready for delivery early in December [1905].” He did “Sermons in Stones” for Bartlett in September 1905 See entry for 13 September 1905 in the account books, Folder 2, Box 81(1), 1974 W.A. Dwiggins Collection, Boston Public Library.—but the other quotations do not appear in his account books “The Open Road” for Bartlett in 1910—see 12 April 1910 in account books, Folder 3, Box 81(1), 1974 W.A. Dwiggins Collection, Boston Public Library.
None of these items, except for later versions of the quotations created for Alfred Bartlett, appear in Dwiggins’ account books, suggesting they were done between July 1905 (the earliest entry in the account books) and . See The Definitive Dwiggins no. 48 regarding the Field woodcut.

note that Wind: Winter proof at BPL Folder 29, Box 35 on back of Guernsey Press manifesto suggests it (and maybe the sea fight and Field portrait were made earlier and that the list re Christmas is referring to 1903 not 1905)—why would WAD bring loose sheets from Ohio with him to Hingham?

copy of Bartlett 1906 catalogue in Folder 1, Box 40, 1974 W.A. Dwiggins Collection, Boston Public Library lists “Some Mottoes, designed by Mr. Will Dwiggins and Printed under His Direction”—”The Open Road”, Song from Pippa Passes,”Sermons in Stones” Proverbs 15:17  and “He Is Wisest…” from Whitman, and Revelations 21:1 to 5. No woodcut prints.

texts of WAD list and Bartlett list do not match exactly; but clearly Bartlett was distributor for WAD items and this not client; and items not in account books

Sermons in Stones part of bookplate WAD did for Ida Farrar McFarland [signed D.]; where is Bartlett version?

Sermons in Stones [Tongues in Trees] unsigned version with red initial T in same ornament as Wenceslas in 2001 WAD, Box 5, Folder 2—must be Will Dwiggins version [bartlett description; “Freely drawn Roman lettering in black with red initial; cut on wood and printed from the blocks.”]

for Proverbs 15;17 see my Def Dwig post; copies at Yale and Newberry and BPL but i don’t have scans; Bartlett description: “An elaborate Italio-Gothic [sic] initial letter in red begins the proverb, which is drawn in a vigorous black-letter.”—more drawn textura than calligraphic

He Is Wisest Bartlett 1906: “In severe Roman capitals printed in black” signed D; copy at dartmouth

Revelations [“A four-page folder with the letterpress on page three…”] in Dartmouth list; note how similar its calligraphy is to The Parable of the Prodigal Son.; copy at Dartmouth; is M copying Griffo in De Aetna?

Open Road in Folder 10, Box 40 BPL must be the Will Dwiggins one since it is clarly not the 1910 version with an illustration; note that is described in Bartlett as “Drawn in a strong Roman letter after a 16th century Spanish model.”; Pippa’s Song in the same folder is in a rotunda/textura/bâtarde hybrid with a flourished T which means it is the Will Dwiggins version [Bartlett description says “Drawn in a round black-letter [implying rotunda] with a large flourished initial.” Pippa’s Song in Folder 9, Box 40 and copy in Folder 32, Box 41 has a large Goudyesque initial T and chunky Goudyesque roman lettering which suggests it was done in fall of 1905 or maybe even earlier. Initial is similar to one in Rabbi Ben Ezra or title page ornament?

WAD did As You Like It for Ginn Shakespeare; scrap in Folder 25, Box 41 BPL—note border

WAD desire to be an artist 1900–1910 with various projects and ideas; designer of books with letteing and decorartion only as means of having control; like Bartlett—prints, greeting cards and broadsides (no calendars) on the side—needed partner for printing, business and promtion

Arts and Crafts Exhibition in Celebration of the Tenth Anniversary of Organization . . . (Boston: Heintzemann Press, 1907)
“Colored xylographic print. Title ‘The Sea-fight.’ Printed in black and colored by hand in Japanese manner. Designed and cut on wood by Mr. Dwiggins.” p. 62 item 1198

[re The Sea Fight: “A small woodcut 2 1/2 3 3/4 inches; printed on Dutch hand-made paper; colored by hand. 150 copies.”; item no. 3 print “Wind: Winter” is woodcut done in 4 printings. Out of print.—this could be the WAD woodcut of a tree; item 6 the Sermons in Stones is “Block 6 x 9 inches, on heavy Japanese paper 10 x 13 1/2 inches. Freely drawn Roman lettering in black, with red initial; cut on wood and printed from the blocks. 200 copies. Particularly suitable in subject and treatment for country-house or club.”]

separated leaf from 4 pg. Christmas remembrance printed by WAD [says pencil note on back]
The Revelation of St. John the Divine 21:1–5 entirely handlettered by WAD in roman with red inscriptional A within decorative box; 6” x 9”

motto card “He is wisest who has the most caution. He only wins who goes far enough.” Walt Whitman
signed D.; in Roman capitals; black; 10” x 7” [but deckle edge makes it shorter] List [no. 8] says “Block 2 1/2 x 5 1/2 inches, on toned Japanese paper 7 x 10. The quotation is in severe Roman capitals drawn in four lines the long way of the sheet. Printed in black.”

Dartmouth item mounted sheet with Will Dwiggins brochure: [and see Newberry; WHAT IS DATE?]
announces A Christmas folio “The Adoration of the Shepherds” from second chapter of St. Luke, verses 8–21 as an inexpensive but handsome Christmas card lettered by WAD: “The selection is brought into a single page of mediæval black-letter, further ornamented with a large decorative initial in blue and red.” priced at 25¢ with five copies for $1 (personally inscribed); 50 copies for $9 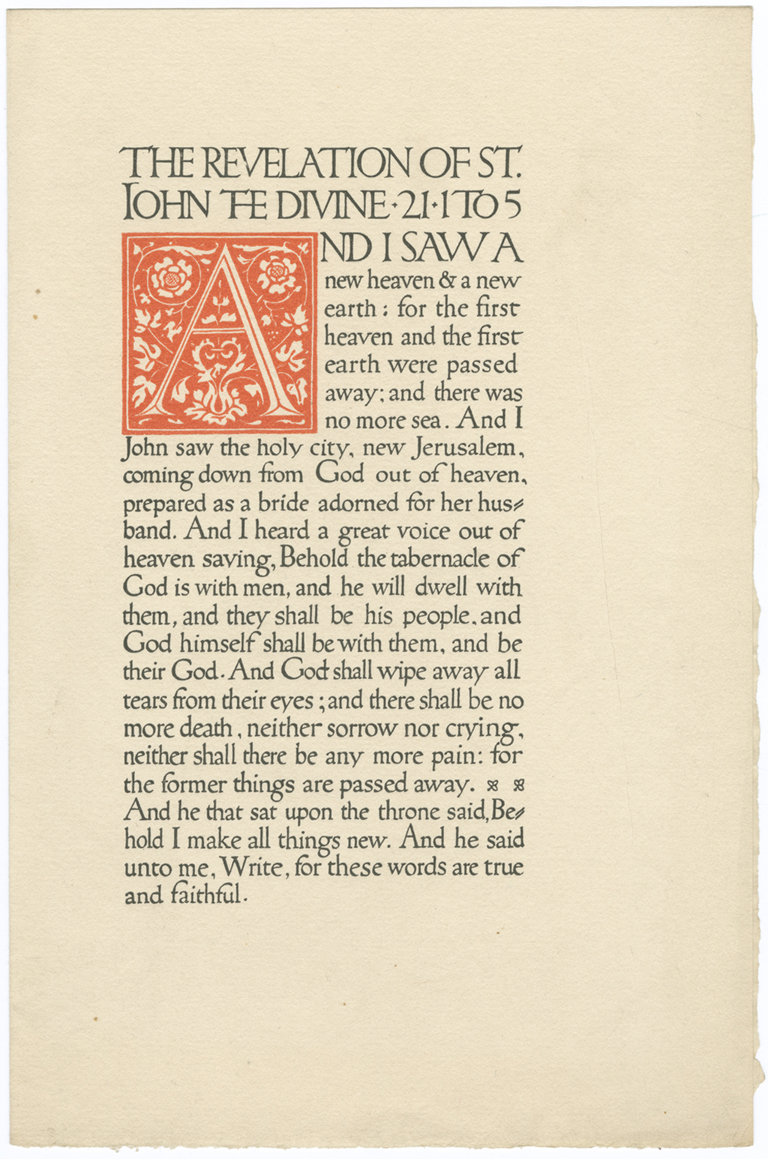 “The Revelation of St. Iohn the Divine 21:1 to 5” greeting card. Design and lettering by W.A. Dwiggins (1906). Image courtesy of the Rauner Library, Dartmouth College.

WAD took A for Revelation of St. John the Divine from p. 94 and 129 Ongania; but also see German Renaissance initials