The Definitive Dwiggins no. 445—Faust

The Definitive Dwiggins no. 419—Serenade

James Cain (1892–1977) is best remembered for his hard-boiled crime novels that were subsequently made into iconic film noir movies: The Postman Always Rings Twice (New York: Alfred A. Knopf, 1934), Double Indemnity (1936), and Mildred Pierce (Alfred A. Knopf, 1941). [1] Serenade (New York: Alfred A. Knopf, 1937), his third novel, never made it it to the silver screen, but not for lack of trying. Its controversial depiction of the supposed link between homosexuality and artistic creativity was a stumbling block, especially at a time when the Hays Code was still in effect. [2]

The typography, binding, and jacket for Serenade were all designed by W.A. Dwiggins. In the surviving correspondence between him and the publisher Alfred A. Knopf, there is nary a mention of the homosexual aspect of Cain’s novel. All of the talk is about the jacket design—especially its color combinations—with a few asides about the binding stamping. Both the jacket and the title page of Serenade stress the novel’s Mexican setting and its female protagonist Juana Montes, an indígena prostitute.

The Art Deco-style title page vignette is a Dwiggins concoction with no relation to the story in Serenade, where its male protagonist is John Howard Sharp, a baritone opera singer. It is very likely that Dwiggins read at most a synopsis of the novel—and possibly a bowdlerized one at that. [3] The stylized woman playing a stringed instrument has no connection to Juana Montes, other than that she appears to be indigenous. Yet, her headdress does not match any known Aztec or Mayan one. [4] She is a Dwiggins fantasy of Mexico, created out of his stencil elements (augmented by drawing for her nose and hand, and the pegs of the instrument). [5] The Art Deco theme is echoed with the title set in Ultra Bodoni by Morris Fuller Benton (American Type Founders, 1928). [6] 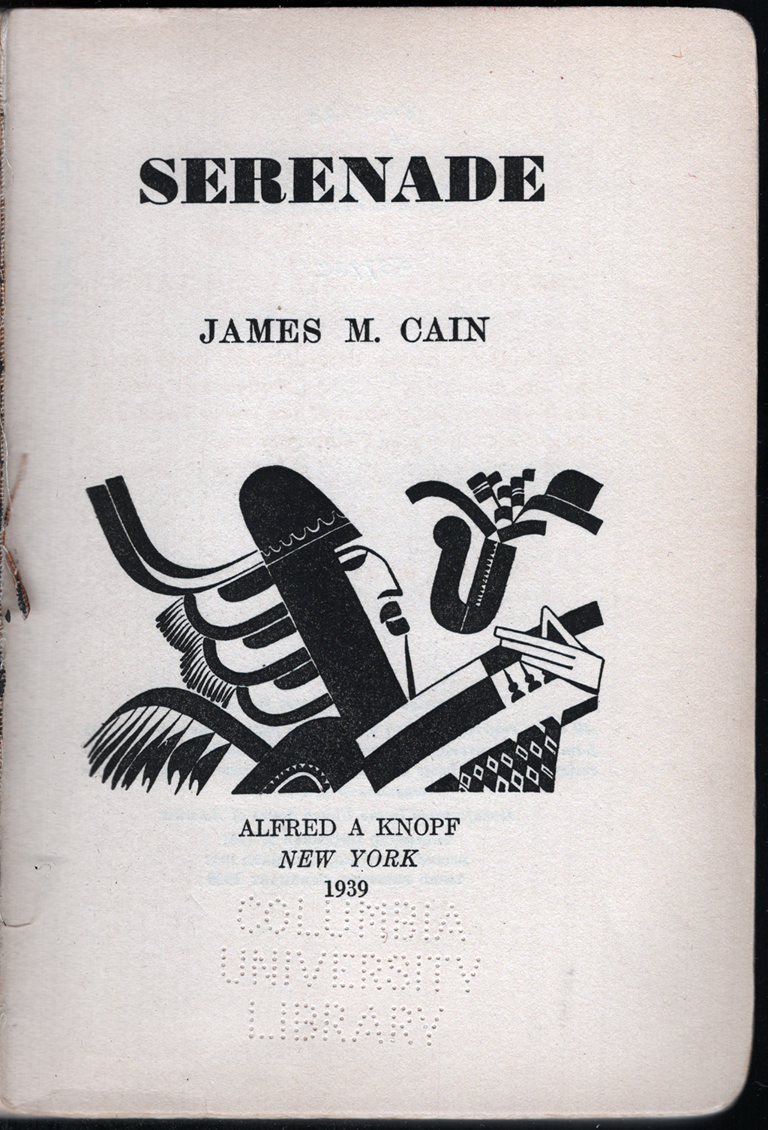 Binding
The binding for Serenade is dramatic: black cloth stamped in silver. [7] The front simply has the title in Art Deco stenciled lettering and a field of comma-shaped stencil ornaments, both positioned at the top. The lettering is taken from an alphabet that Dwiggins designed for the binding of American Alphabets by Paul Hollister (New York: Harper & Bros., 1930). The letters are identical except for two small differences: in Serenade the N is wider and the A narrower. Dwiggins must have made these changes to achieve a more pleasing visual rhythm, though the word still seems clumsy. [8] 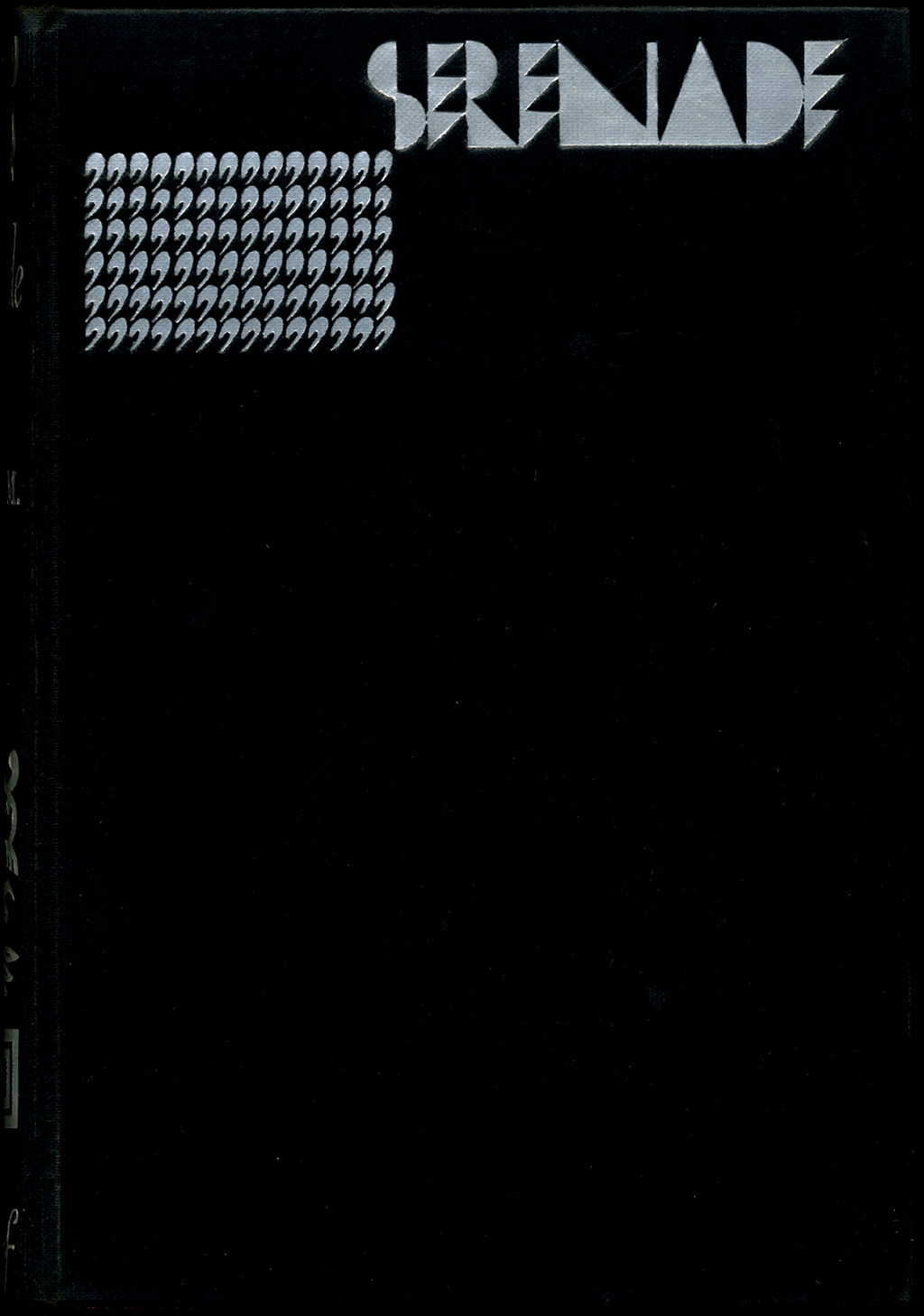 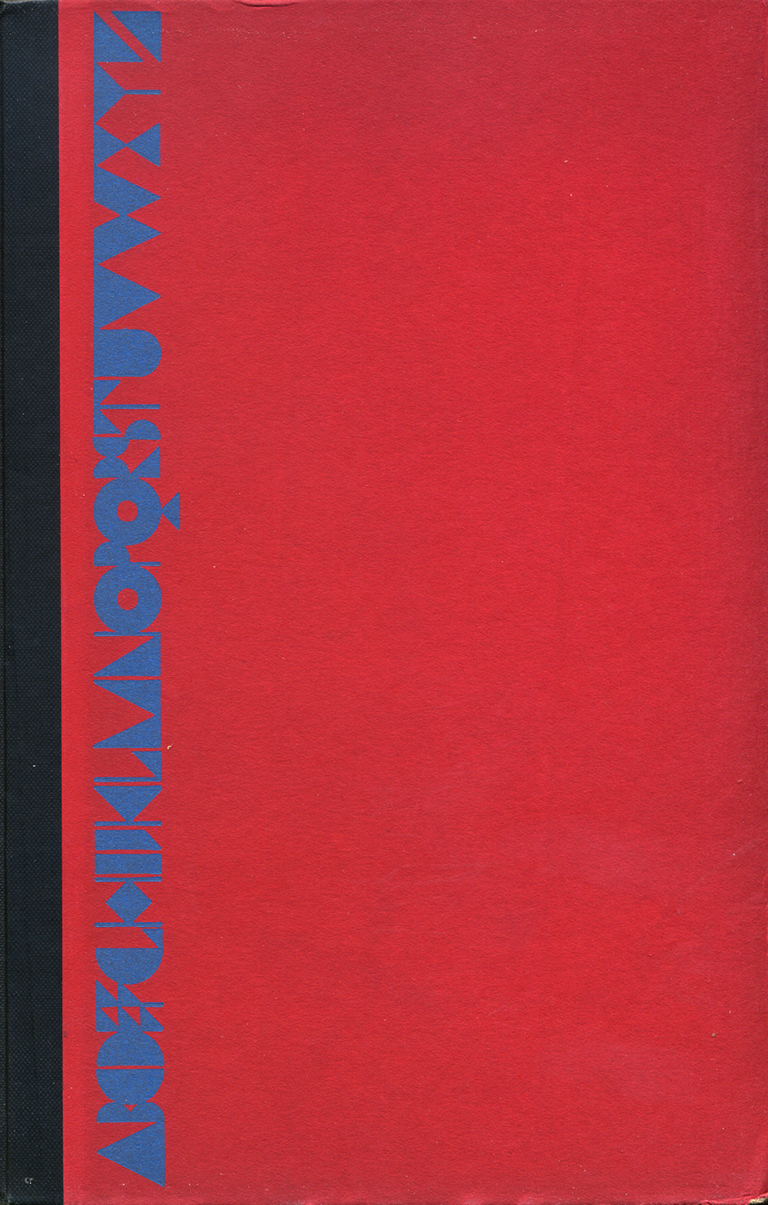 The binding spine is a complete contrast to the front—in a typical Dwigginsian manner. The title and publisher’s name are lettered in script and there are stencil decorations at top and bottom that more clearly hint at the Aztec/Maya theme of the title page vignette. In particular, the lower decoration suggests the headdresses of figures found in codices such as the Codex Borgia (c.1500) or the Dresden Codex (12th c.). [9]

Jacket
Dwiggins strengthened the Aztec/Mayan theme for the jacket of Serenade, the highlight of his design for the novel and arguably the most startling of all of his jacket designs. He described his idea for the  jacket as “wild Mex.” and it certainly is that. [10] On the jacket front “By the Author of The Postman Always Rings Twice,” the title, and Cain’s name are lettered on a curve in a mix of styles: a chunky serifed italic in upper- and lowercase, condensed grotesque (sans serif) caps, and slab serif caps respectively. Below the text, and bleeding off the bottom of the jacket, is the head of what appears to be Quetzalcoatl, the feathered serpent deity of Mesoamerica. [11] The design also incorporates vaguely Aztec/Mayan decorative elements along with a parabolic curve separating Cain’s name from the head of Quetzacoatl. There is a lot of pulsing figure/ground relationship—which varies depending on the color combination—in the entire composition.

The jacket spine is more restful with the title lettered in black slab serif capitals, Cain’s name reversed out of a decoratively bordered colored panel and lettered in classically-influenced sans serif capitals, “Knopf” lettered in oldstyle italic capitals in black, and “Borzoi Books” lettered in classical capitals reversed out of a colored box. There are plant-like stencil decorations in two colors at the top of the spine and between Cain’s name and the imprint. (I have deliberately not specified the colors involved in the jacket because Knopf used four different color variants, which I discuss below.) The whole is a riotous mishmash of lettering styles, ornament styles, and colors.

Detail from The Temple of the Feathered Serpent at Xochicalco, Mexico.Quetzacoatl. Photograph by Lucho Maler.

Dwiggins submitted artwork for the jacket on September 10, 1937, but the real work began after that as he and Jacobs tested out multiple color combinations for the jacket with samples of the final choices being printed by October 23, 1937. What occurred during those six weeks is fascinating, even if an exact chronology cannot be determined. [12]

Jacobs told Dwiggins he liked the jacket design and when Dwiggins asked for a higher than usual fee he readily assented. At that point Dwiggins and Jacobs apparently discussed ideas about color combinations. “Can you go as wild as this?” Dwiggins asked him, attaching a dark green scrap of cloth with a color swatch of magenta paint. Rather than choose a specific color-combination, Jacobs must have suggested that they print multiple ones since, on September 21, Dwiggins wrote, “Variety of color-schemes for SERENADE jacket grand idea.” At this point Plimpton Press began printing a series of proofs with Dwiggins marking each one up and sending the full set to Jacobs on October 22. In the meantime Jacobs had obtained Cain’s consent to have his book published in a variety of jackets. Dwiggins was very pleased with the final set of jacket proofs, telling Jacobs on October 23, “SERENADE jackets are knock-outs, TOP HOLE PLUS, AAA111; see what the sales-crew and retailers say—if they say NO GO, then this line of attack on jackets will have to be given up.” If the sales office objected to this novel idea they must have been overruled by Alfred A. Knopf himself since Serenade was published with four different jacket variants. [13] 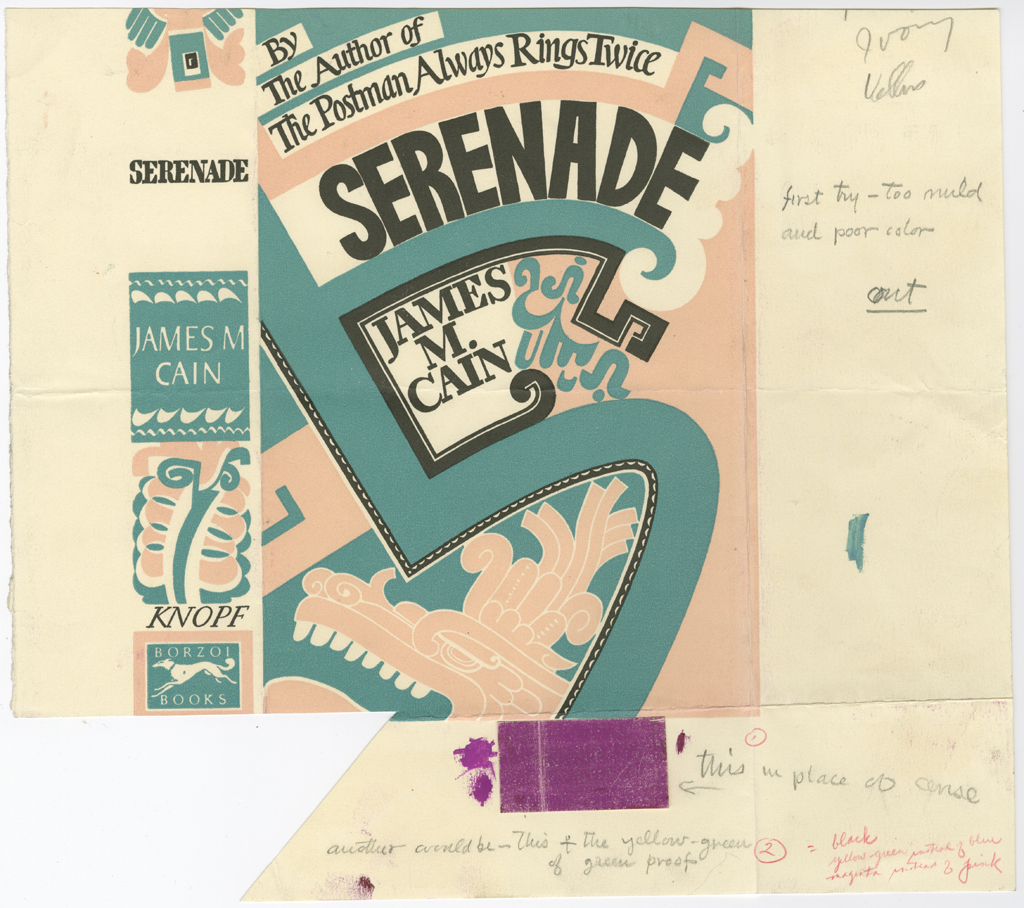 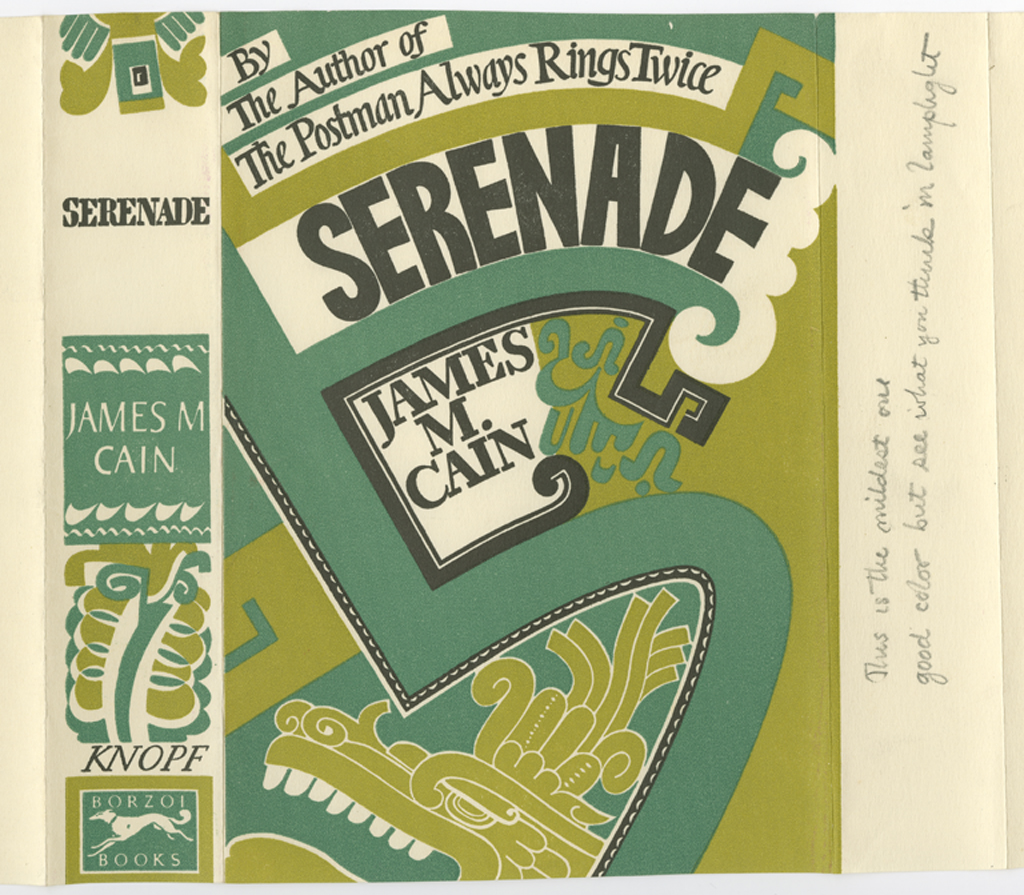 In the Alfred A. Knopf Papers at the Harry Ransom Center, University of Texas there is a folder with eleven proofs of the Serenade jacket printed in a variety of two-color combinations plus black. The order in which the proofs were made is not entirely clear as only two of them are numbered and they were definitely not the first two to be tested out. [14] Six of them are annotated by Dwiggins which provides a partial road map to their sequence.

The first was jacket no. 5 [above] in blue and cerise (or pink)—as Dwiggins inconsistently described the colors—on ivory vellum paper. It is marked at right “first try—too mild and poor color / out“. Below Dwiggins has added a strip of burgundy paint and two more notes. The first says, with an arrow pointing to the strip of color, “this in place of cerise / another could be—this and the yellow-green of green proof.” In red pencil Dwiggins has numbered the cerise suggestion as 1. and the yellow-green suggestion as “2. = black / yellow-green instead of blue / magenta instead of pink.” [15]

Dwiggins’ practice of dabbing some gouache on paper or attaching a swatch of binding cloth—or even a clipping from something printed—to show Jacobs what color he had in mind or wanted matched by Plimpton Press was not unusual in his day. He worked before the introduction of the Pantone Matching System (PMS) with its numbering of colors based on standardized formulas. [16] Thus, there was some back and forth trial-and-error involved in getting the correct shades of the various colors Dwiggins envisioned for the jacket.

The reference to a proof with both yellow-green and green suggests that the second proof, made at the same time as the first, was jacket no. 3 [above]. Dwiggins’ comments about it were: “This is the mildest one / good color but see what you think in lamplight.” Apparently Dwiggins, thinking of the conditions under which the jacket would be viewed in a bookstore, was testing the various color combinations in both natural light and artificial light. In his time, the latter would have been from incandescent bulbs as fluorescent lighting was not widely used until the 1950s. 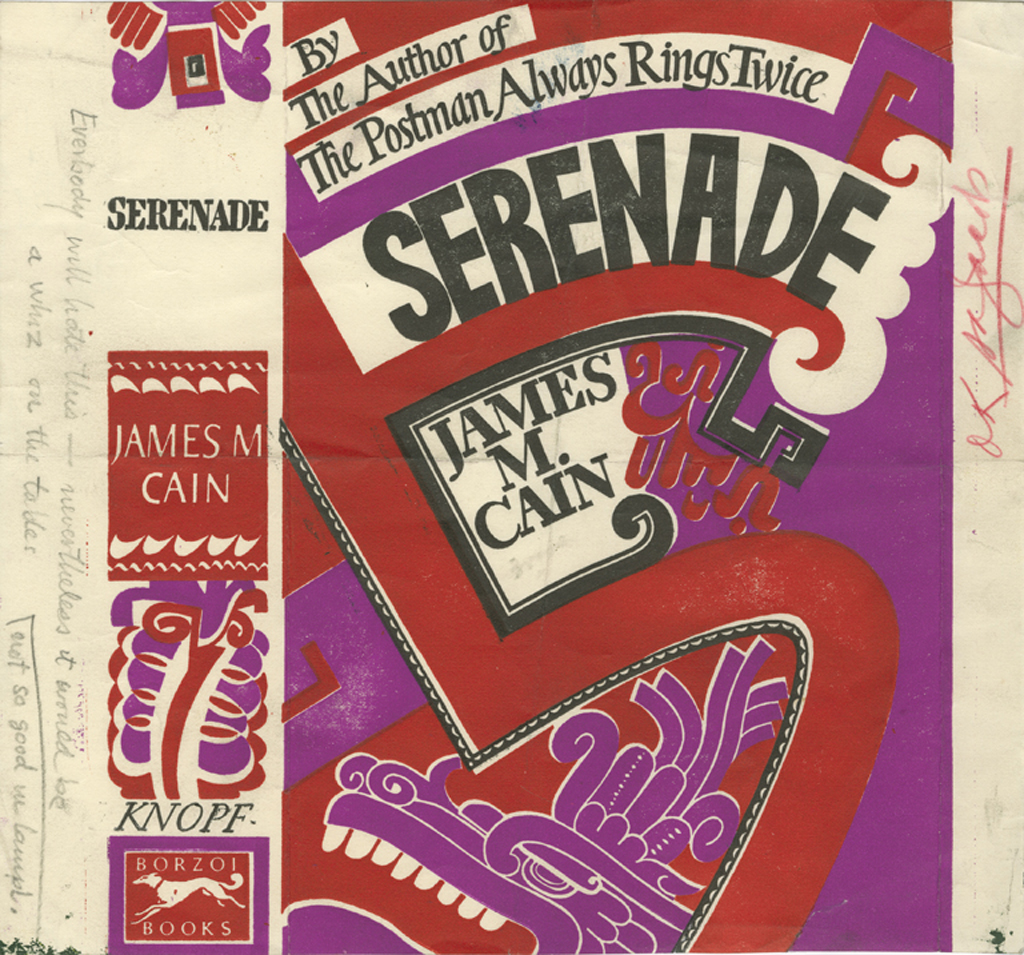 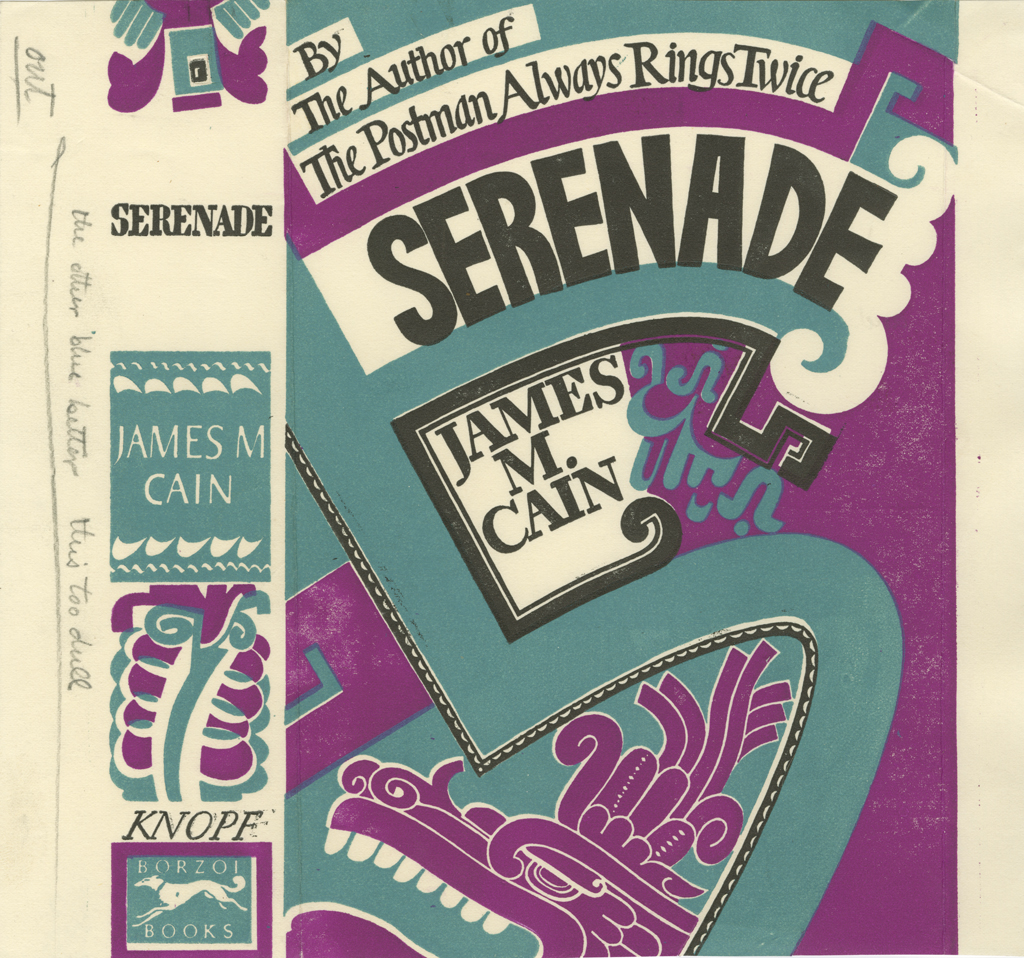 Based on Dwiggins’ notes about lamplight jacket proof no. 4 (above) was probably printed at the same time as proofs 5 and 3 (see above) and possibly jacket proof no. 6 (above) as well. On no. 4 Dwiggins has written: “Everybody will hate this—nevertheless it would be a whiz on the tables / not so good in lampl[ight].” No. 6 is marked “out / the other blue better this too dull” which implies he preferred the blue of no. 5.

Jacket proofs nos. 1 and 2 (below) are surely responses to the red pencil notes on jacket proof no. 5. No. 1 is described as “yell basis this best in lamplight” with “yell” referring to how much the design screams to a potential book buyer. In red pencil someone other than Dwiggins as marked “OK good”. On no. 2 Dwiggins has written, “On the basis of a yell on the tables 1 and 2 about equal—but try effect of lamplight on this green—it goes dull.” 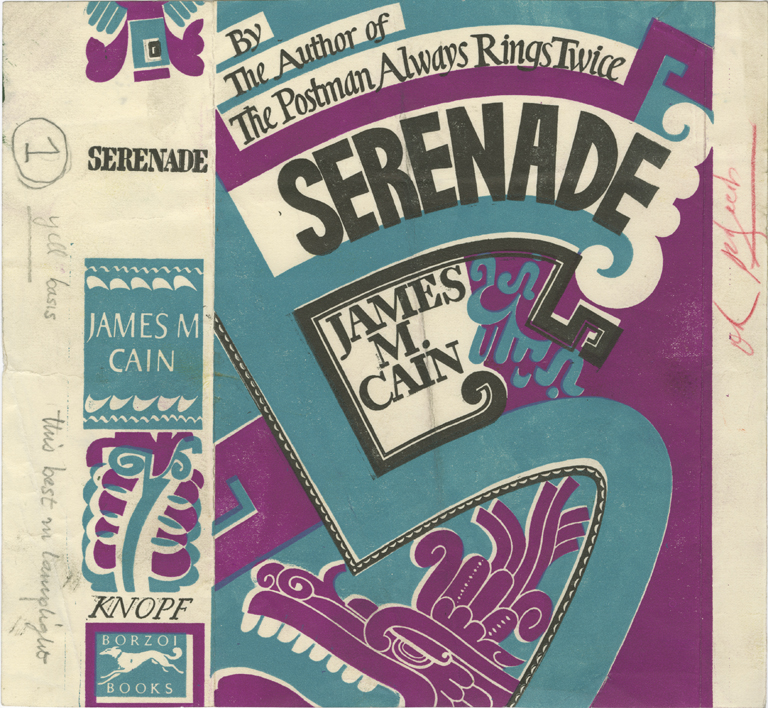 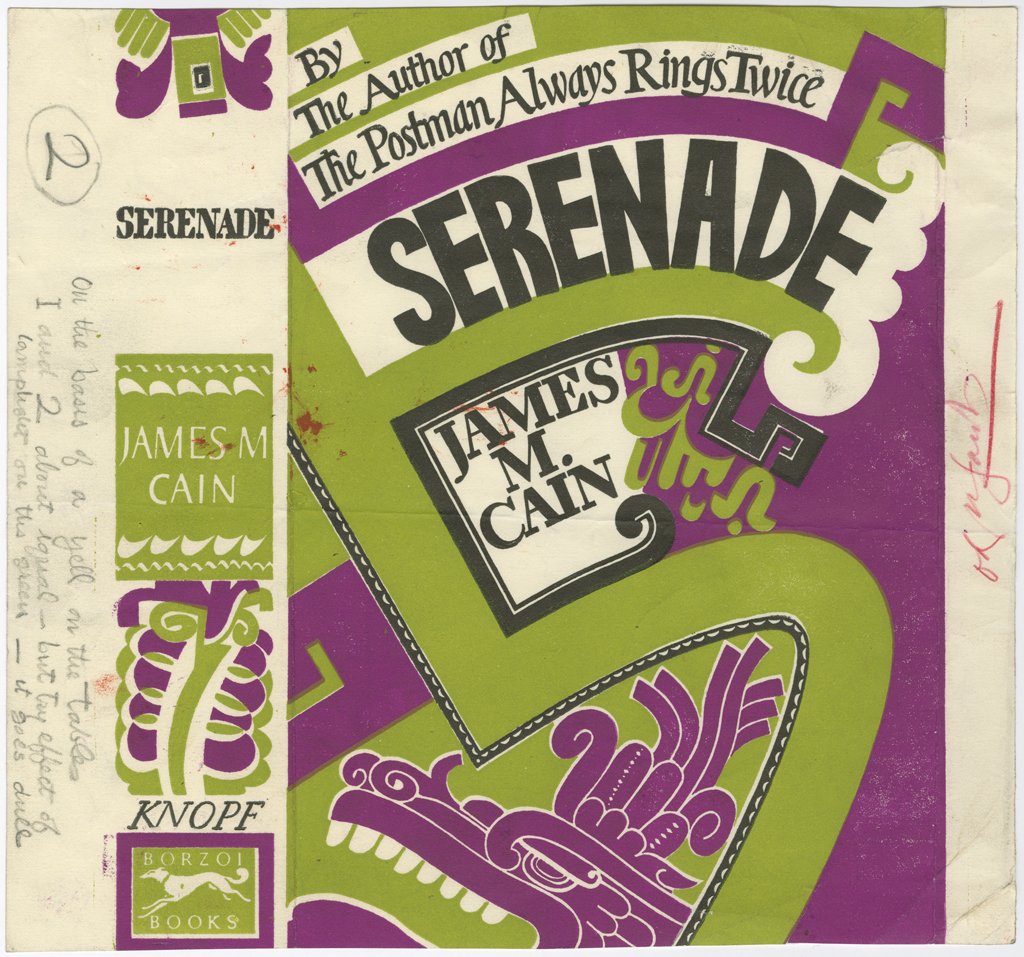 Jacket proofs nos. 7 and 8 (see below) may have been done at the same time as nos. 1 and 2 since they seem to be subtle variations on nos. 5 and 3 respectively. In no. 7 the pink of no. 5 has been strengthened while no. 8 is printed on a rougher paper stock than no. 3. Neither proof bears any annotations. 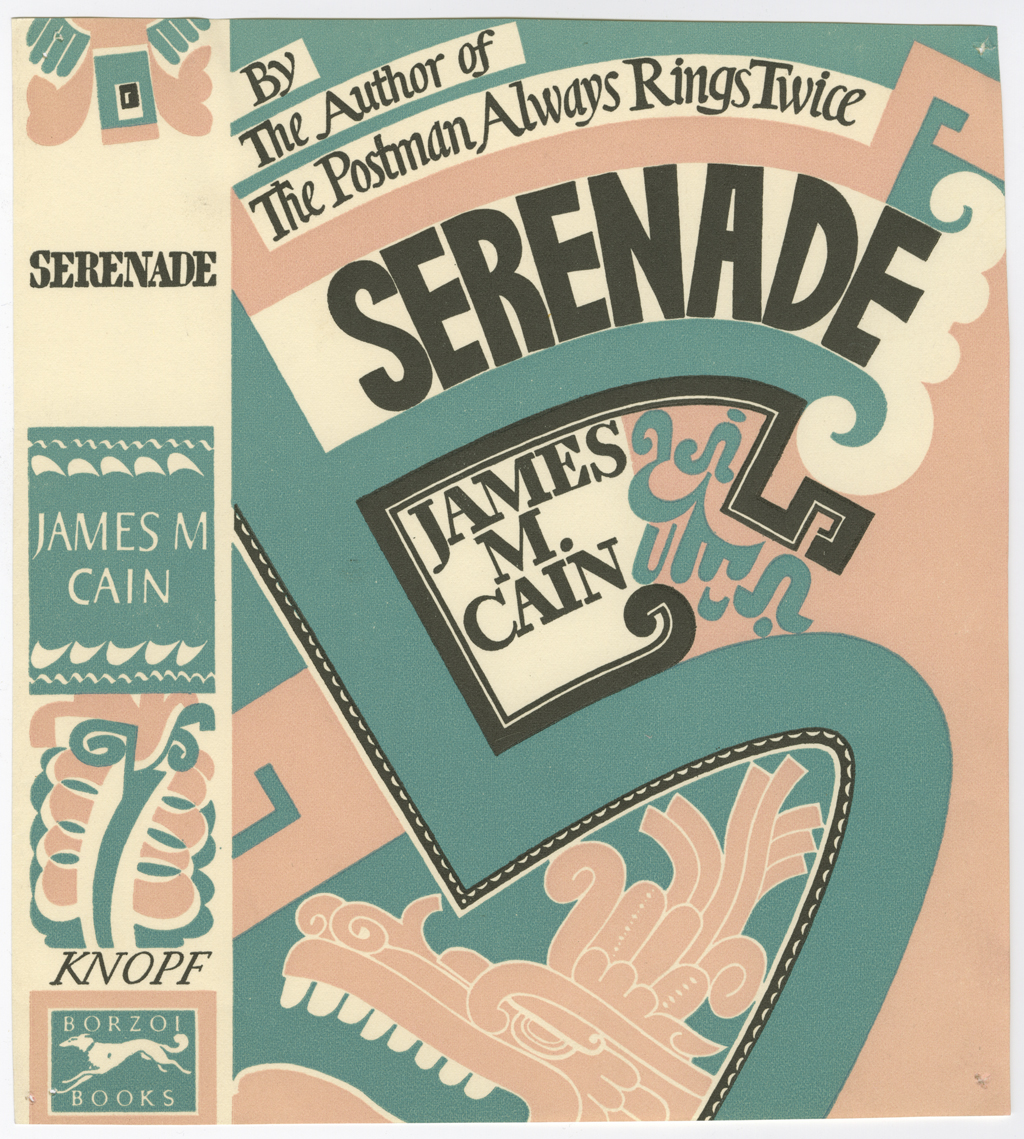 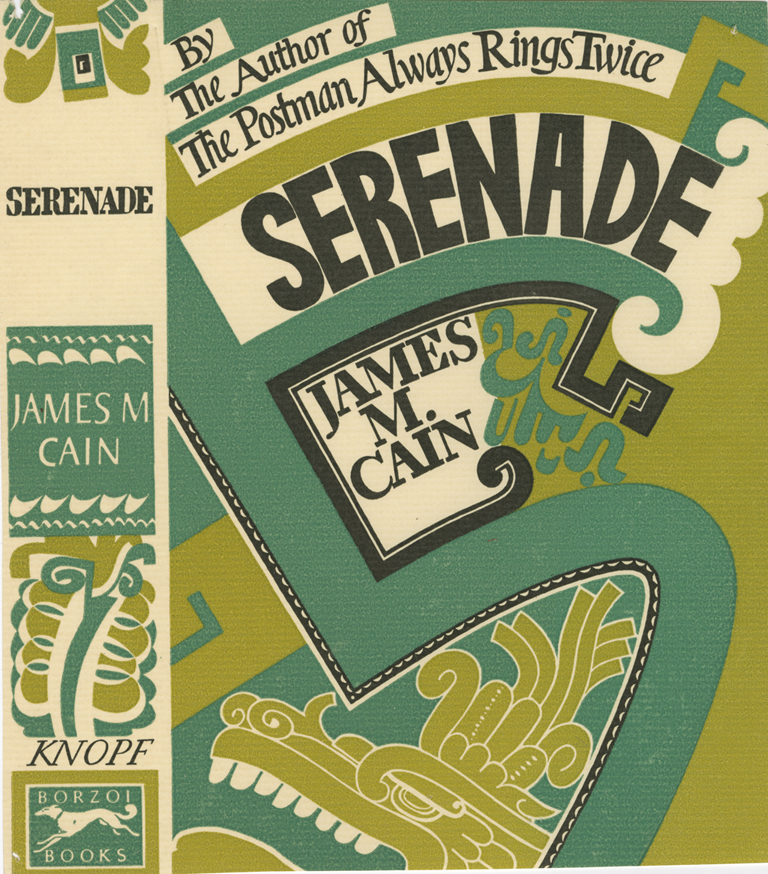 Knopf’s experiment with variant jackets for Serenade was unusual for the company as well as for other publishers at the time. There are some jackets (e.g. The Backbone of the Herring) designed by Dwiggins which underwent changes in color for subsequent editions. The closest situation (at least for Knopf) that I can think of is the way in which Dwiggins’ jackets for Not Under Forty by Willa Cather (New York: Alfred A. Knopf, 1936) and The Sea of Grass by Conrad Richter (New York: Alfred A. Knopf, 1936) were adapted for later books by those authors with different combinations of color. 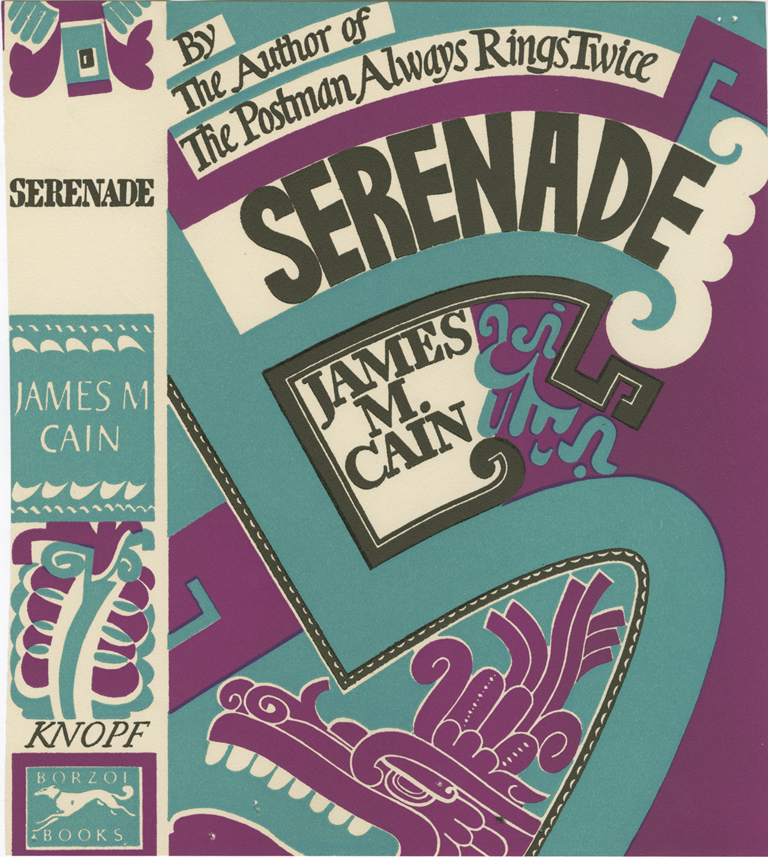 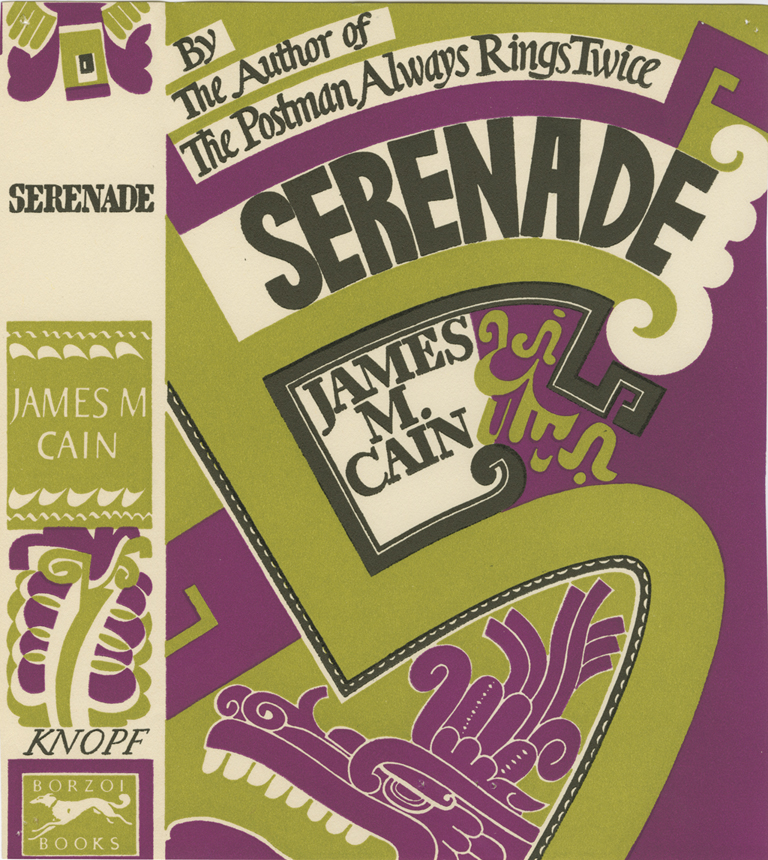 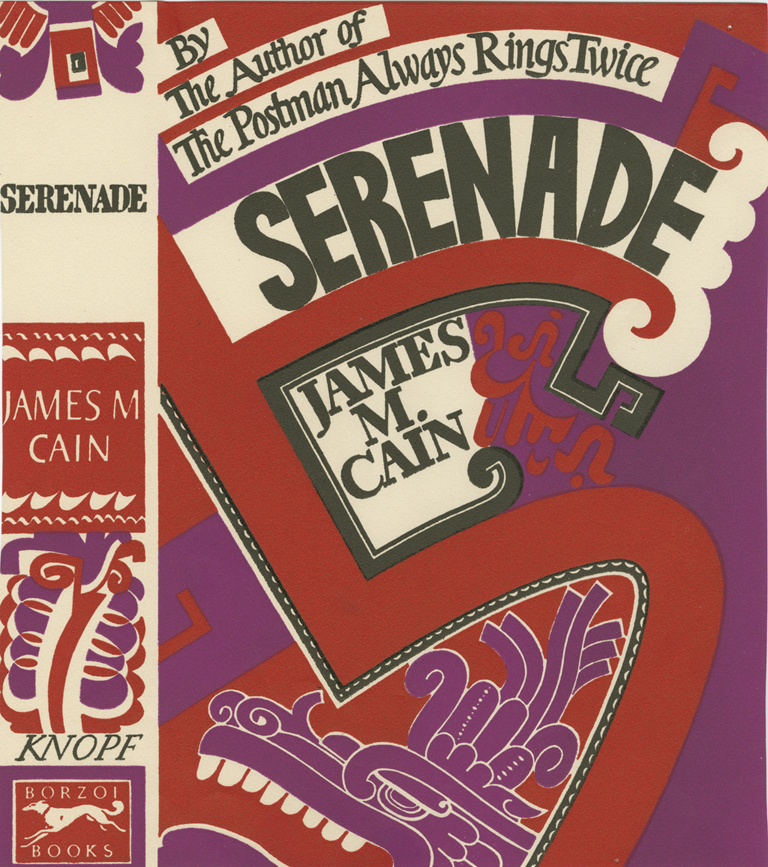 A Note on Payment
Dwiggins was usually paid $75 for designing jackets for Knopf. This was on top of the fee he received for designing the book itself, binding included. In the case of Serenade he wanted more, asking Jacobs “…if the book will stand it make the charge 100, if not, the usual 75.” Jacobs readily agreed. [18] The exchange occurred before Jacobs suggested printing the jacket in multiple color combinations so it is not clear why Dwiggins felt he deserved more money for this design. Certainly, it was no more complex than several jackets he had designed in 1936 such as those for Not Under Forty by Willa Cather and The Sea of Grass by Conrad Richter.