Type historian Dan Reynolds has sent me the following comments regarding my notes to the English translations of Paul Renner’s essay “Futura: Die Schrift unsere Zeit” in Blue Pencil no. 60. Within brackets I have added some clarifying information.

There are two things that deeply bother me about the advertising around Futura’s launch. The first is that, as far as I can remember reading, there does not seem to have been any critical reaction to the phrase “Die Schrift unserer Zeit”. Since 1927, this has been a descriptor of Futura. Maybe even THE descriptor of Futura. The printing industry seems to have adopted the phrase without question. That is somewhat irritating, as the printing industry in general did not take to [László] Moholy-Nagy’s proposals for a New Typography. The industry was quite a reflective profession in the 1920s.  And although the phrase “Die Schrift unserer Zeit” may not have received much criticism, I do not mean to imply that the Futura typeface was universally embraced. Certainly, there were well-known designers who took issue with the typeface, or with other aspects of the presentation Renner and the Bauersche Gießerei gave it.

As Julia Meer showed in her doctoral thesis Neuer Blick auf die Neue Typographie: Die Rezeption der Avantgarde in der Fachwelt der 1920er Jahre (2015), the mid-1920s German printing industry did not have a conservative, reactionary bent. Rather than with disgust, the New Typography was met with confusion and questions. Most of the ideas it put forward had already been applied between 1900 and 1914. It was obvious to anyone in the industry, even a lowly journeyman compositor, that Moholy-Nagy et al were outsiders making proclamations about things they did not really understand. Meer quips that [Jan] Tschichold was the only one of the New Typographers who knew what kerning was, for instance.

In 1928, Heinrich Jost [1889–1948] took Josef Albers, Herbert Bayer, László Moholy-Nagy and “Iwan” Tschichold to task in a printing industry journal. Jost was the Bauersche Gießerei’s art director. He had been a pupil of Renner’s before the war and may have been instrumental in Futura’s production. Three years earlier, the then very-young Konrad F. Bauer [1903–1970] had expressed his doubts about the New Typography. Or at least about the “Elementary Typography” Tschichold was then presenting. While Konrad F. Bauer was not related to the Bauer family that had established the Bauersche Gießerei and the Bauer & Co. type foundries in the 19th century, he did join the Bauersche Gießerei in 1928. (Konrad F. Bauer was the son of Friedrich Bauer [1863–1943], who was maybe the most prolific German-language printing-industry author.) Voices like Jost’s and Konrad F. Bauer’s were not raised to counter the Bauersche Gießerei claims about Futura. Indeed, they were in the trenches helping to promote it. So at least some of the New Typography’s critics were not in a position to critique Futura or the Bauersche Gießerei. However, Konrad F. Bauer did criticize the idea that any one typeface could represent an era. That was in 1930, a few years after Futura’s successful release. Was that as close as an industry personality came to questioning the claim that Futura was “Die Schrift unserer Zeit?” 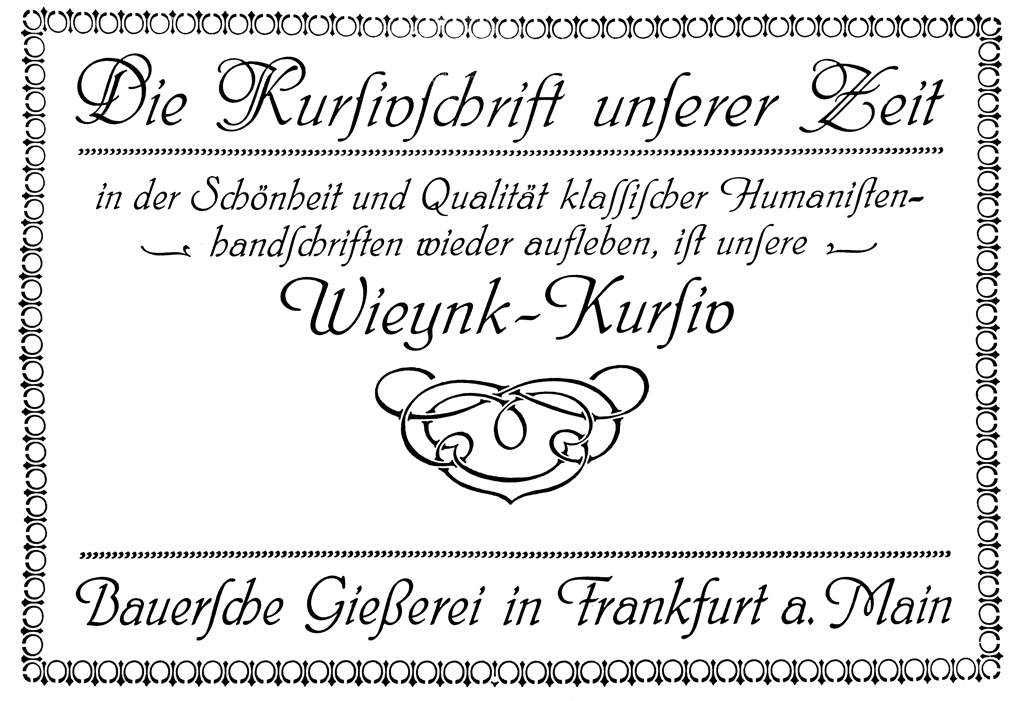 The second thing that bothers me is that the Bauersche Gießerei seems to have used the phrase “Die Schrift unserer Zeit” before. Attached for instance is a 1913 or 1914 advertisement for Wienyk-Kursiv, in which the Bauersche Gießerei had described the typeface as “Die Kursivschrift unserer Zeit”. Nobody has ever described Wieynk-Kursiv that way since then, as the claim was simply not accurate, just aspirational. I think the company had a marketing slogan in its back pocket, which it hoped would eventually stick. With Futura, it finally did. Interestingly, Heinrich Wieynk [1874–1931]—who had designed Wienyk-Kursiv—was one of Futura’s few vocal critics.

Another point: I am not certain that Renner’s Futura specimen introduction was referencing lettering from 1895 to 1914 and the calligraphy of the old masters. I think that Renner’s statements are a commentary on type-making in 1927. By the mid-1920s, it was a matter of faith in the printing industry that type came from writing, both because of influential texts of Rudolf von Larisch (as well as the quieter example of Anna Simons‘s pupils) and the phenomenal success of the Klingspor foundry’s typefaces. Even before Rudolf Koch’s first typeface was published, the foundry had already released work from [Otto] Eckmann, [Peter] Behrens, and [Otto] Hupp that had been informed by writing instruments. All of Koch’s typefaces were based on his own calligraphy, and I think that Renner could not stand any of this.

There have been decades worth of discussions regarding how many ideas Renner and the young Jan Tschichold shared. [Christopher] Burke suggests that Tschichold did not find Futura suitable as a typeface for body text, which was Renner’s intended application for the design. In his Die neue Typographie, Tschichold also wrote that type needed to be designed by engineers. That would have left no room for Paul Renner or the entire Klingspor stable. It also left no room for the many other designers that foundries like Berthold, Schelter & Giesecke, and Stempel had been hiring in their attempt to produce calligraphic typefaces that would catch fire the way Klingspor’s did.