The Definitive Dwiggins no. 133—The Parable of the Prodigal Son 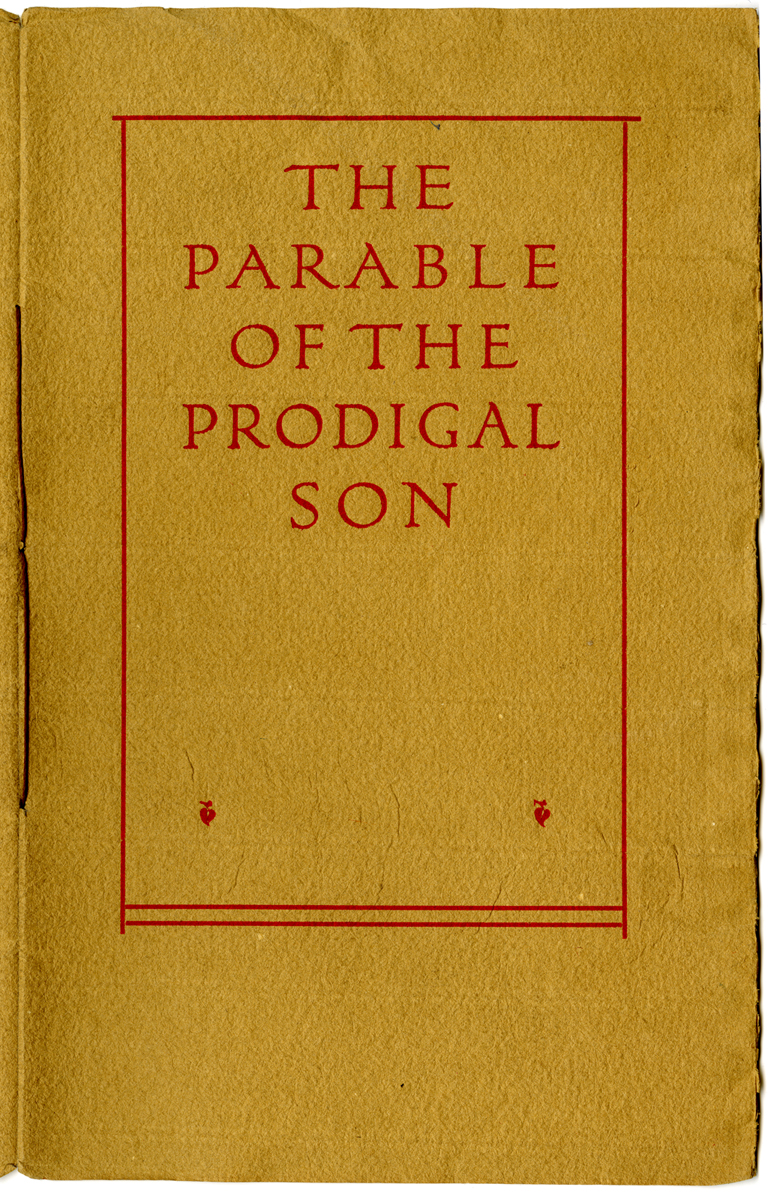 Cover of The Parable of the Prodigal Son (Boston: Alfred bartlett, 1905). Design, lettering, and printing by W.A. Dwiggins. Image courtesy of the Robert B. Haas Family Arts Library, Yale University.

“I caught Dwiggins yesterday printing a book that he had handlettered and was going to sel [sic] himself, and I stopped him and am going to publish it myself. ” Alfred Bartlett (1870–1926) wrote to his friend Edwin O. Grover (1870–1965) on November 11, 1905. “It is the Parable of the Prodigal Son, and it is very pretty.” [1] Bartlett must have been been visiting The Village Press where W.A. Dwiggins was working on the book, despite having gone freelance in May of that year. [2] At the time he and his wife Mabel were living in Amy Howard’s house on Pleasant Street in Hingham, Massachusetts. “In this house,” Mabel recalled decades later, “Wm. lettered and illustrated the ‘Parable of the Prodigal Son’ which Goudy allowed him to print on the Village Press, tho [sic] without the imprint, since the work was not done by the Master himself.” [3]

It is likely that Dwiggins had begun The Parable of the Prodigal Son at the behest of Rev. Charles E. Park (1873–1962), pastor of the Second Unitarian Church in Hingham. Park, a member of the Hingham Society of Arts & Crafts, had befriended the Goudys when they moved The Village Press to that Massachusetts town in the spring of 1904, and through the Press had come to know Dwiggins. [4] Copies of the parable were printed for him to distribute to friends at Christmas in 1905 suggesting that he, rather than Dwiggins, had initiated the project. [5] However, it is likely that Dwiggins had planned to sell the majority of the edition himself prior to Bartlett’s intervention.

Bartlett was a Boston publisher who specialized in bibelots, greeting cards, and other Arts & Crafts ephemera. He had been commissioning greeting card work from Dwiggins since September of 1905. [6] The Parable of the Prodigal Son was not the first time he had published an entirely handwritten book, but it was the first that Dwiggins made for him. [7] Bartlett issued the booklet in mid-December 1905. [8]

In the Winter 1905 issue of The Cornhill Booklet, the little magazine that started his career, Bartlett advertised The Parable of the Prodigal Son with a double-page spread. A reduced facsimile of the opening page of the parable, showing off Dwiggins’ skill as an illustrator and letterer, appeared on the right-hand page. On the left-hand page Bartlett touted the book’s aesthetic and physical features—its illustrations, lettered text, paper, and binding—and then made his readers a special offer:

A SUGGESTION
Why not let Mr. Bartlett print a special edition of this book for your private use at the holiday season? He would print at the close of the book your own personal colophon, stating that “Here endeth The Parable of the Prodigal Son according to the Gospel of St. Luke, hand-lettered, ornamented and printed for ………………………… and his friends. Christmas Mcmv. Of an edition of …………… copies, this is number ……………..” The colophon might be followed by your autograph. These would make unique gifts, expressing individuality to a marked degree. [9]

It is unclear how many readers of The Cornhill Booklet took Bartlett up on this offer. I am unaware of any personalized or ornamented copies that have survived, unless the Park ones fit into this category. [10] 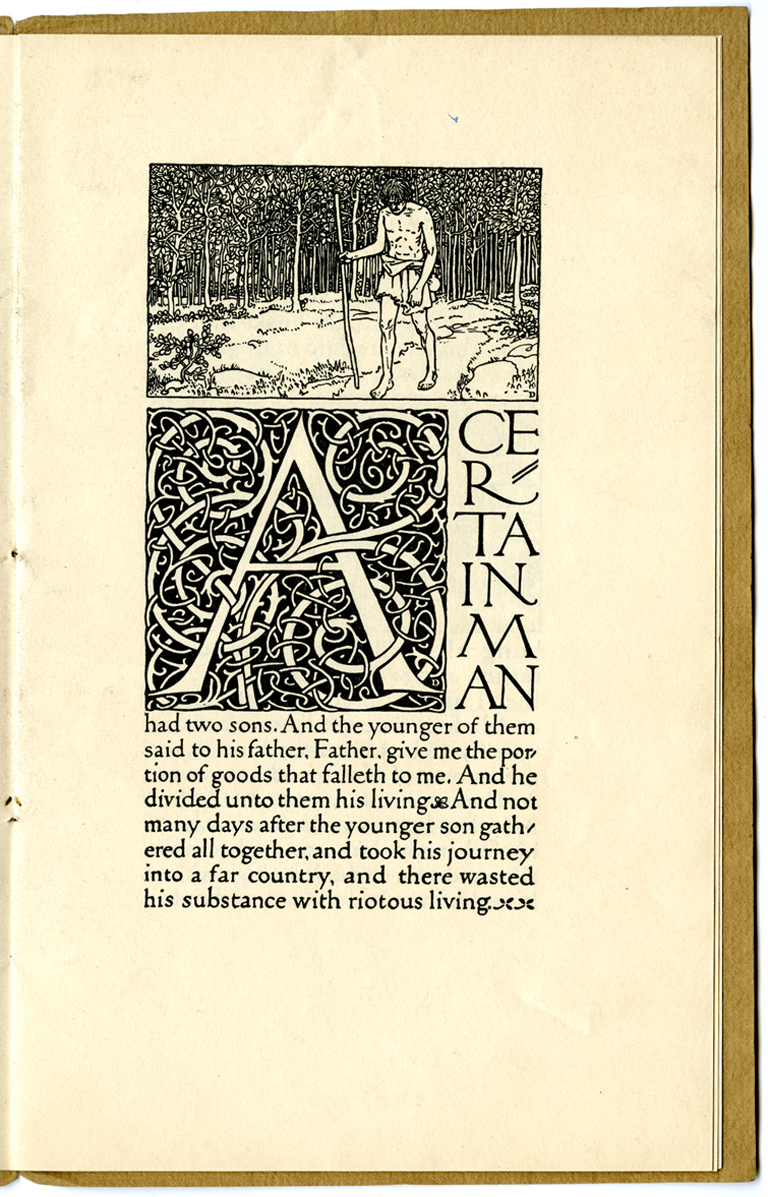 The initial A that opens The Parable of the Prodigal Son is reminiscent of the two woodcut initial As that Erhard Ratdolt used. But Dwiggins’ letter is not a copy. Dwiggins was equally influenced by the white vine initials that Frederic W. Goudy, his mentor, was enamored of in the late 1890s and early years of the 20th century. However, his initial A is not as symmetrical as Ratdolt’s and is more elegant than any by Goudy. [11] The balance of positive and negative elements in Dwiggins’ A is excellent. It is the first mature initial in his career. 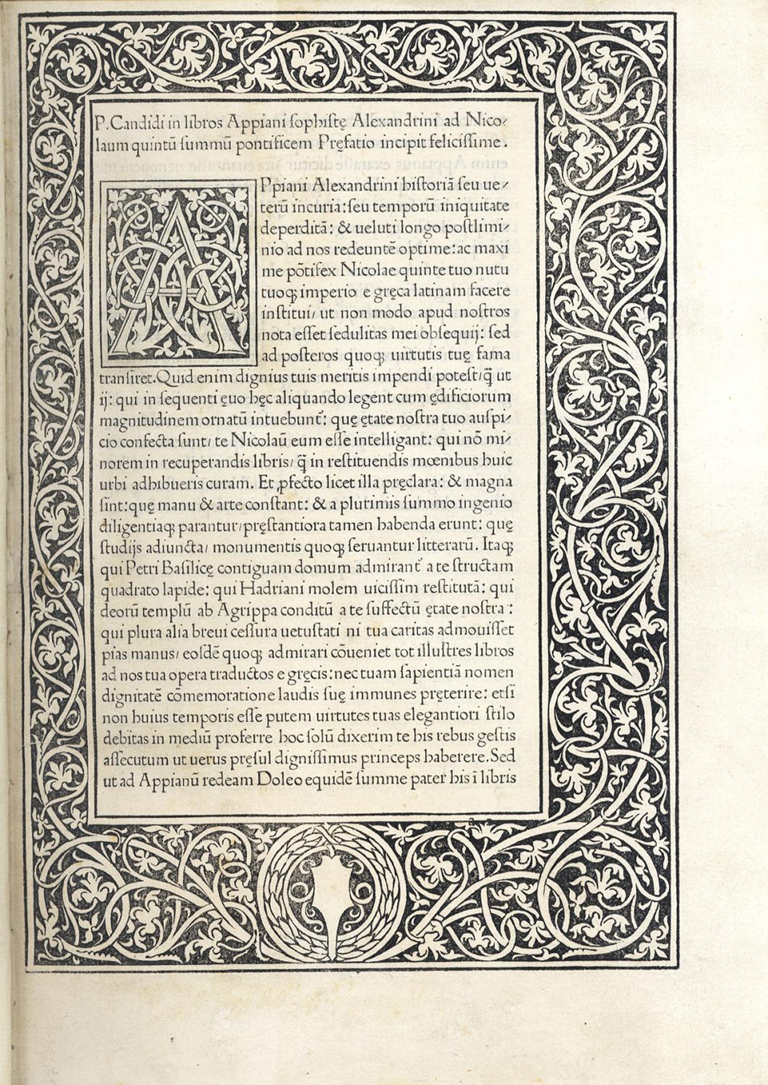 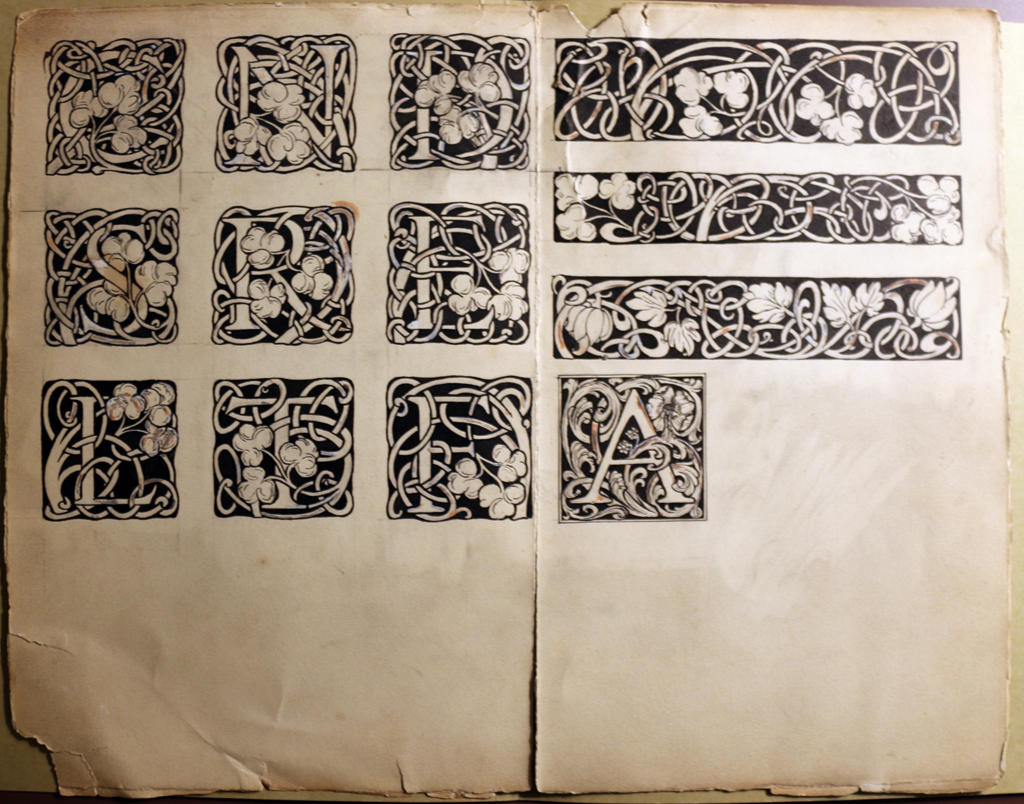 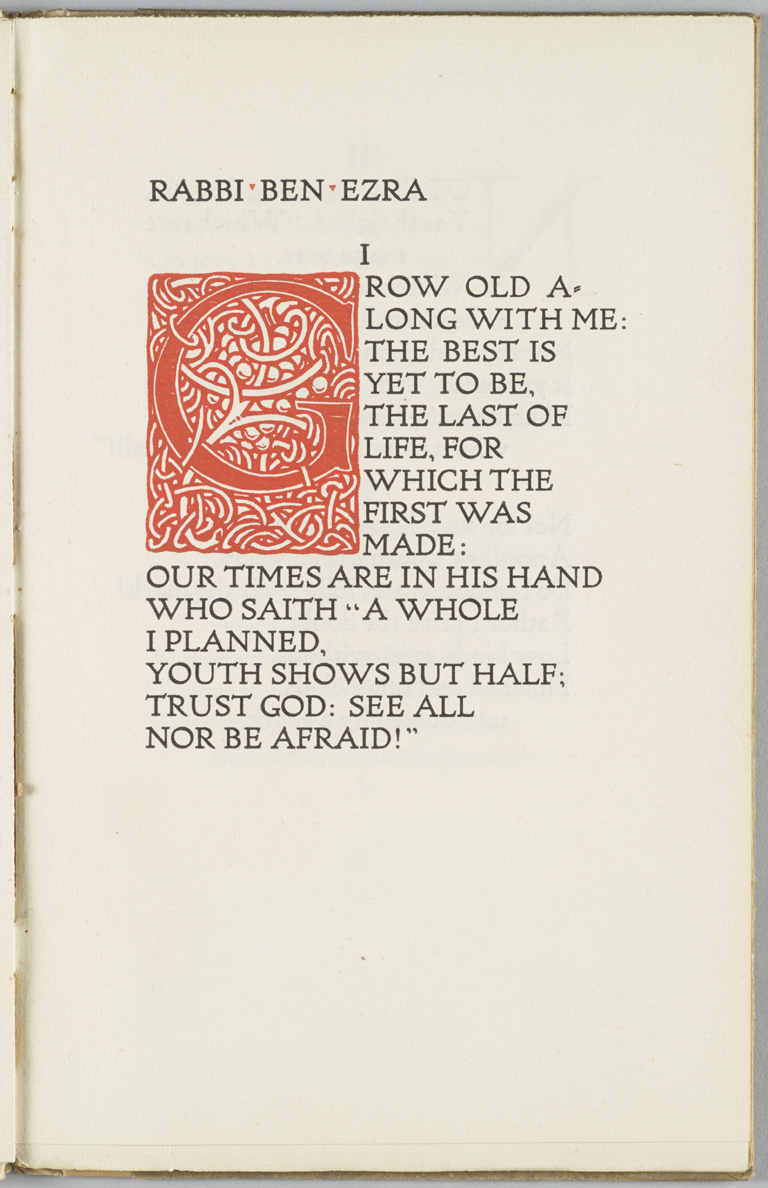 Similarly, the Roman capitals on the opening page have a lightness and grace that contrasts with the heavier ones that Dwiggins, following the tutelage of Goudy, had been making previously. For instance, compare them to the ones he designed for the title page of Good King Wenceslas by John Mason Neale (Hingham, Massachusetts: The Village Press, 1904) the year before. [12] In the latter, several letters  C, G, M, R, and S) are clumsy. 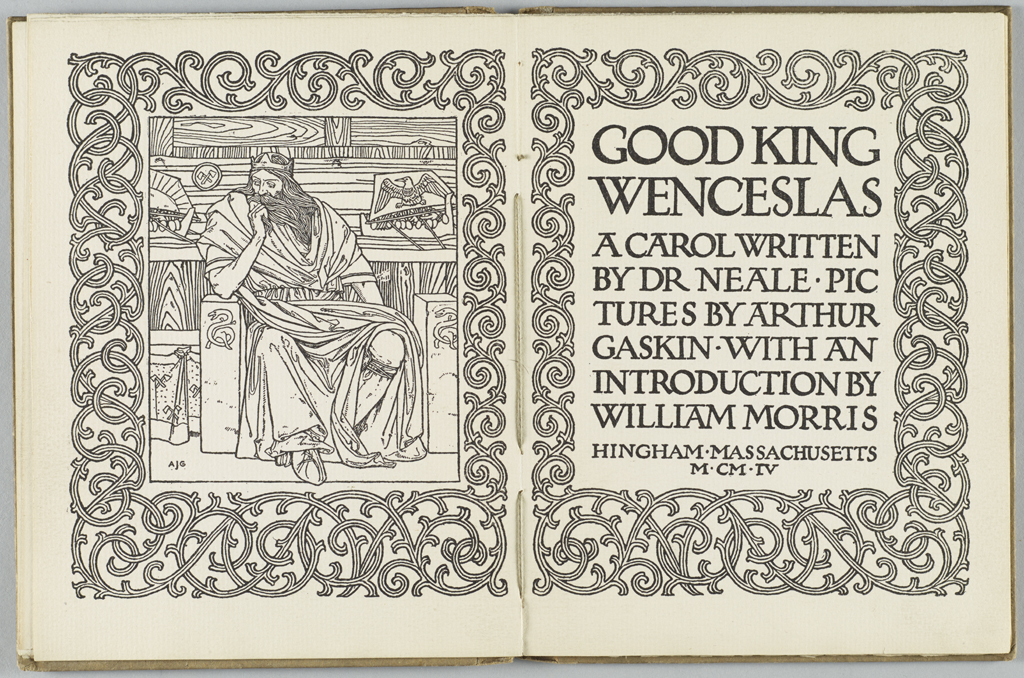 Dwiggins took the text of The Parable of the Prodigal Son from the Gospel of St. Luke in The King James Bible. By the time he was preparing the parable, the King James Version of the Bible was no longer widely read or available. It had been supplanted in the mid-1880s by the Revised Version of the Bible. According to Worldcat there were only two editions of the King James Bible published in the United States between 1880 and 1905 that were neither comparative nor interpretive. Thus, Dwiggins must have used The Bible for Children Arranged from the King James Version (New York: The Century Co., 1902) since his text matches it in all regards save one word and some abbreviated words. [13]

Dwiggins either mis-transcribed or misspelled “commandment” as “commandments,” replaced “and” with an ampersand in a few places—following the old printing practice that the Arts & Crafts movement had resurrected—and used the Old English thorn to abbreviate “that” in one place. His calligraphic rendition is full of the odd hyphenation that he later became famous for in his binding designs for publisher Alfred A. Knopf. This is especially obvious on the first page which opens with “A CE / R- / TA / IN / M / AN.” Elsewhere there is “hir-ed,” e-nough,” and “worth-y.” 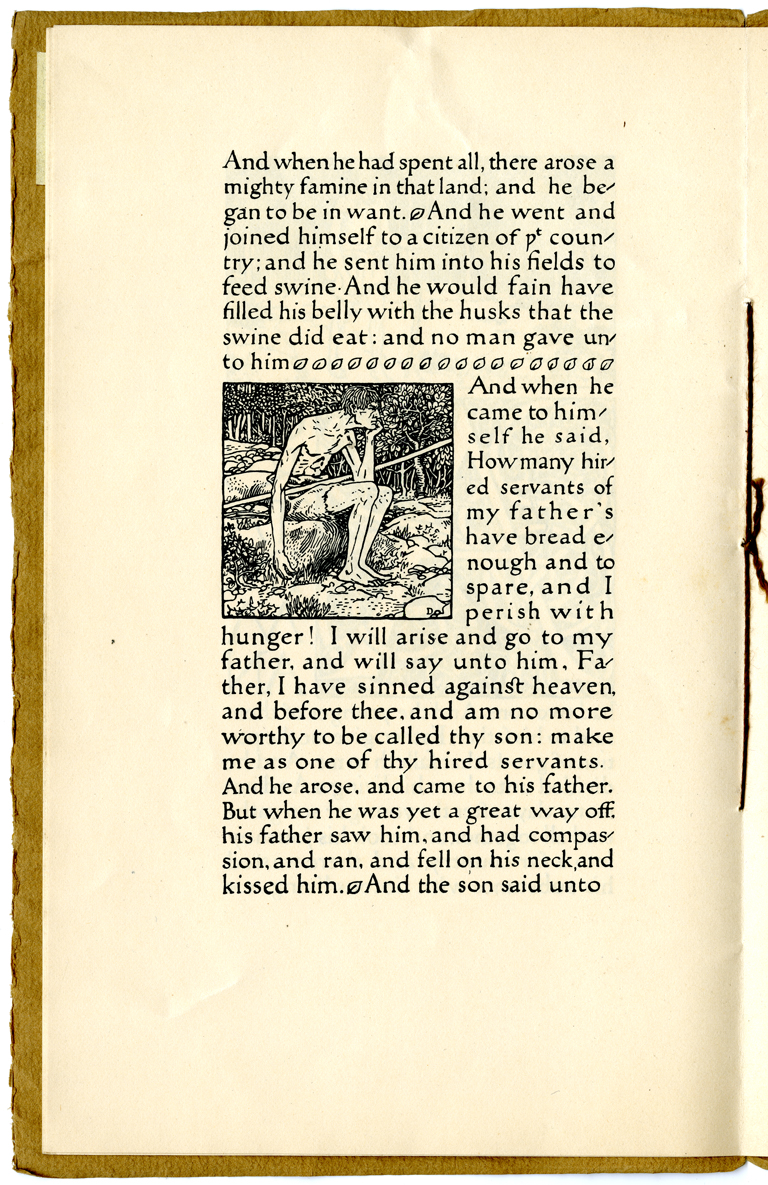 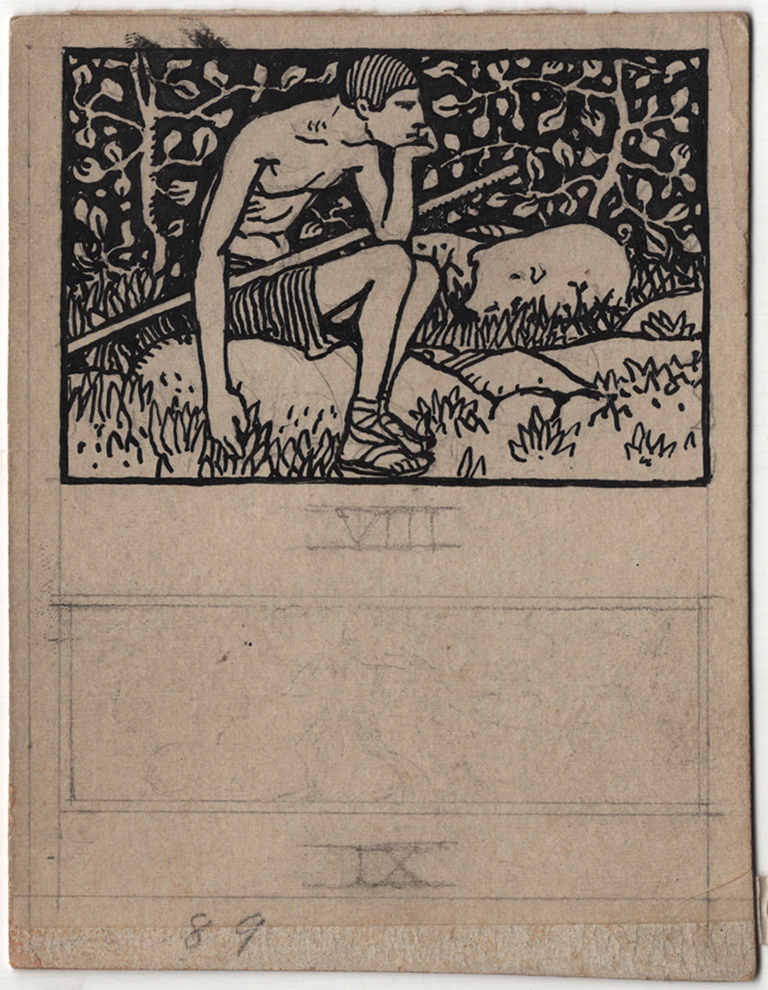 A rough page layout with a fully realized illustration survives for The Parable of the Prodigal Son. It shows a different interpretation of the prodigal son as a swineherd. Not only has the prodigal son been redrawn in the published version, but Dwiggins altered the proportion of the illustration. In doing so, the two pigs hiding in the brush were removed. The drawing style of the unused illustration is closer to Dwiggins’ earlier Chicago work in its heaviness and stylization. Compare not only his treatment of the prodigal son’s head, but also the sandals, the rocks, and the forest in the background. 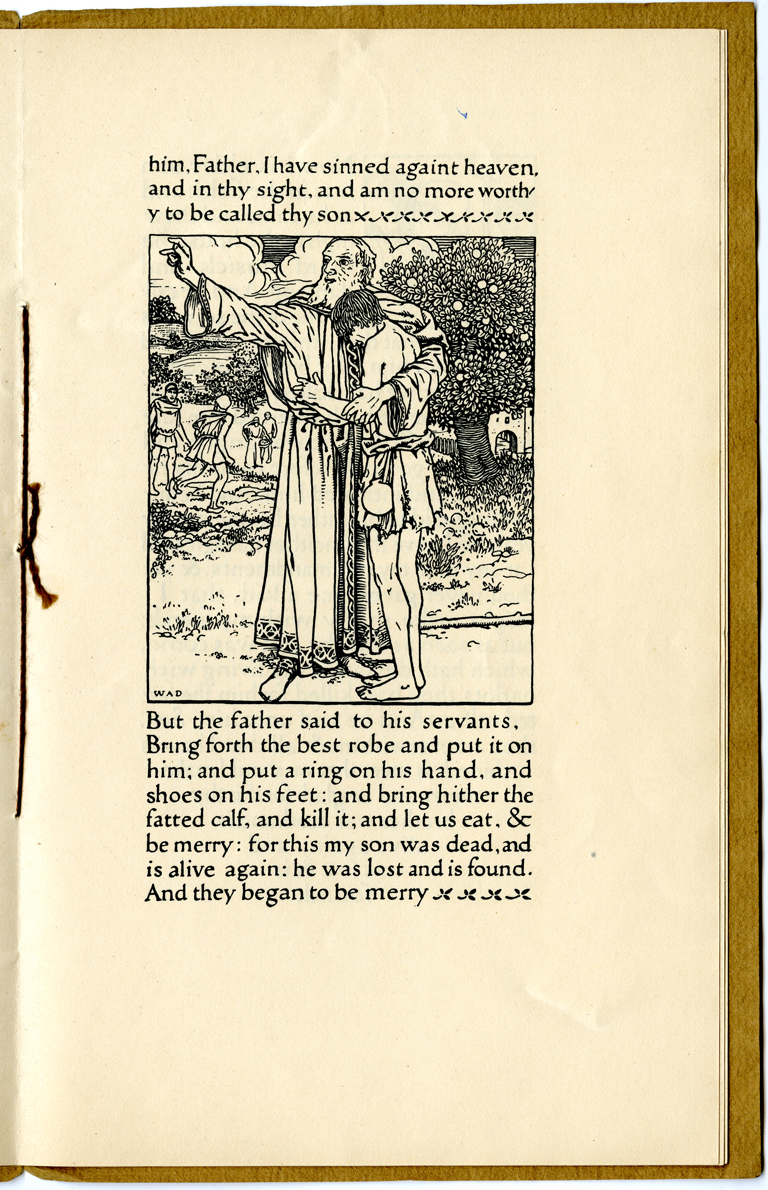 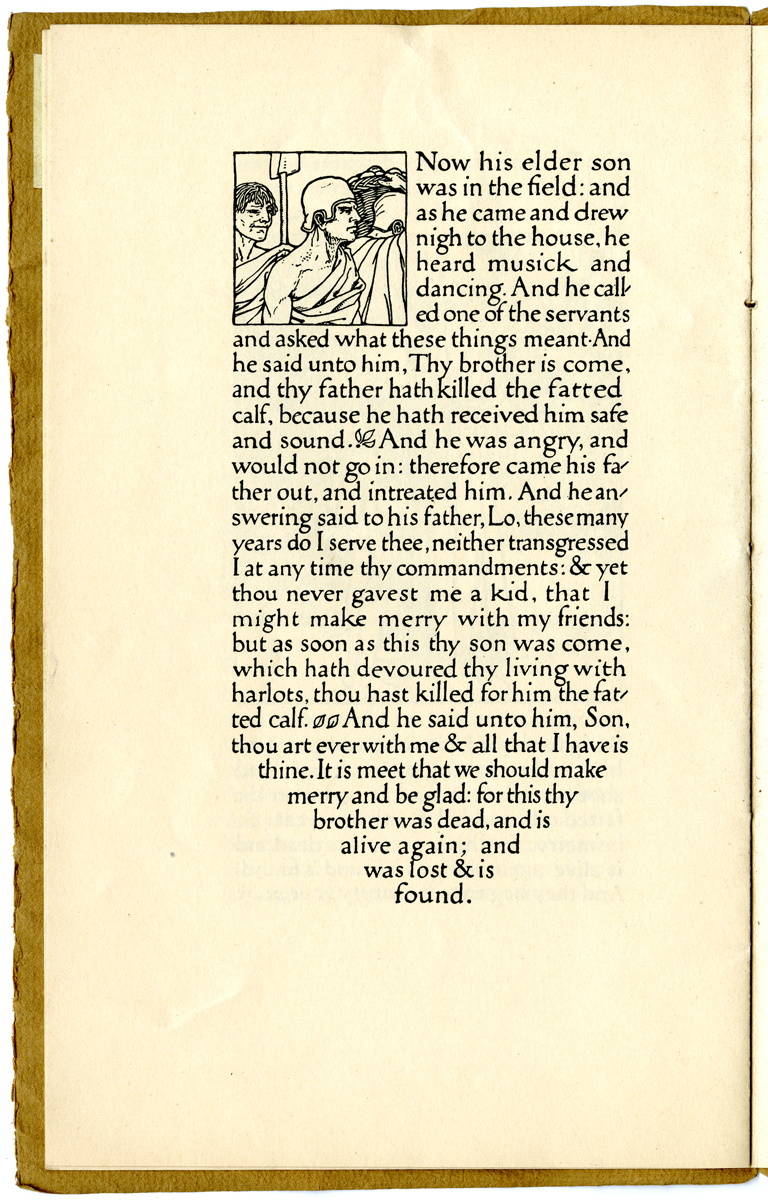 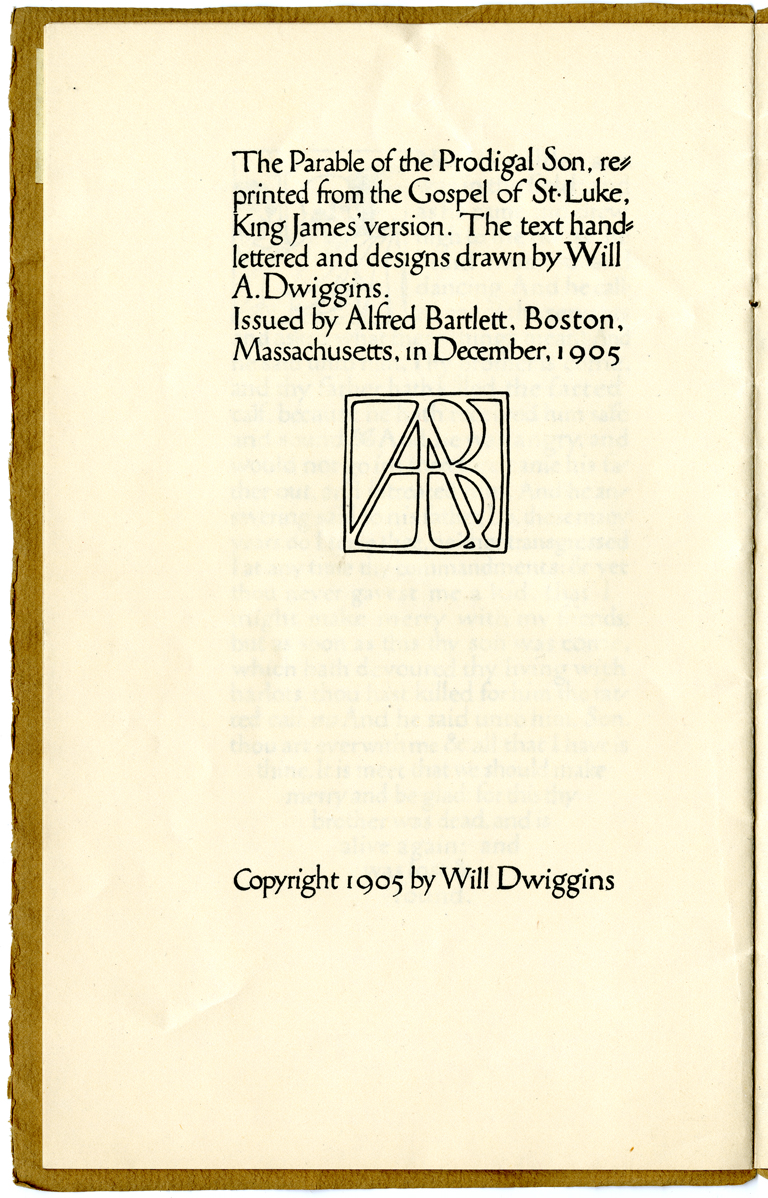 Colophon from The Parable of the Prodigal Son (Boston: Alfred Bartlett, 1905). Design, lettering, and printing by W.A. Dwiggins. Image courtesy of the Robert B. Haas Family Arts Library, Yale University.

Epilogue
In October/November 1906 Dwiggins was corresponding with John Reed, his former classmate at the Frank Holme School of Illustration in Chicago, about establishing a publishing venture to be called Reed and Dwiggins. In the course of their intertwined letters, Dwiggins wrote, “Sure! Prodigal Son for the first booklet.” [14] There is no further reference to the project, but a “dummy” for The Parable of the Prodigal Son survives. Its cover says “Dummy for Prod. Son. with text redrawn” while the interior simply has roughly drawn lines indicating the position of the text block and the presence of ruled frames. There is no sample text and no illustrations. [15] The reference and the “dummy” are puzzling since the date of the former is less than a year after Bartlett’s publication of The Parable of the Prodigal Son. Why Dwiggins would have wanted to do another competing edition of the text is unclear, but in any case it never came to fruition. [16]

n.b. The Parable of the Prodigal Son is not listed in The Books of WAD: A Bibliography of the Books Designed by W.A. Dwiggins by Dwight Agner (Baton Rouge, Louisiana: The Press of the Nightowl, 1974). W.A. Dwiggins: A Life in Design by Bruce Kennett (San Francisco: Letterform Archive, 2018), pp, 56, and 59–60 reproduces the cover and opening page of the book, but says nothing about its origins or production.