The Definitive Dwiggins no. 712—Illustrations of Rome and Venice

The Definitive Dwiggins no. 713—A Description of Christ

The Letter of Publius Lentulus (also known as The Epistle of Publius Lentulus) is a report from “Publius Lentulus, Proconsul of Judea to the Senate of Rome” describing the appearance and temperament of Jesus Christ. The text was discovered in 1421 by Giacomo Colonna. Although denounced as a fraud by the humanist scholar Lorenzo Valla in the 1440s and commonly labeled as spurious or a forgery by religious scholars and leaders over the course of the succeeding five centuries, its account of the physiognomy of Christ has become widespread—and widely accepted. [1]

This man is of noble and well-proportioned stature, with a face full of kindness and yet firmness…. His hair is the color of wine, and golden at the root, — straight, and without lustre, — but from the level of the ears curling and glossy, and divided down the centre after the fashion of the Nazarenes. His forehead is even and smooth, his face without blemish, and enhanced by a tempered bloom. His countenance ingenuous and kind. Nose and mouth are in no way faulty. His beard is full, of the same color as his hair, and forked in form; his eyes blue, and extremely brilliant.…. His person is tall; his hands beautiful and straight. [2] 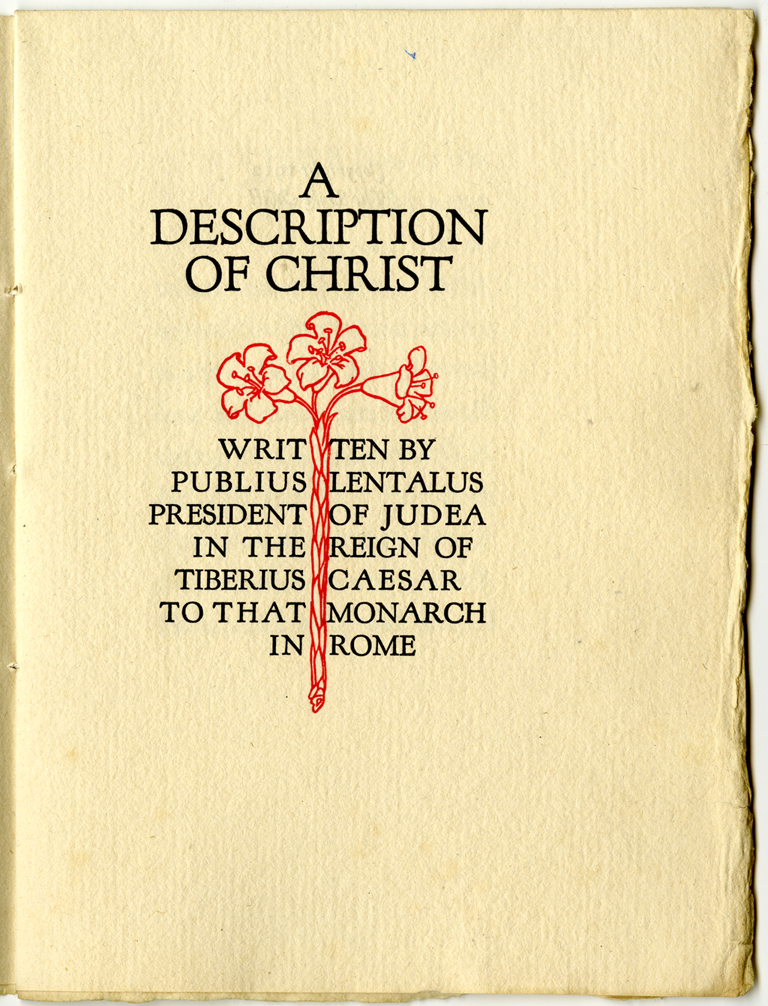 W.A. Dwiggins was involved in the creation and publication of two versions of The Letter of Publius Lentulus. The first was A Description of Christ written by Publius Lentalus [sic], President of Judea in the Reign of Tiberius Caesar to that Monarch in Rome printed by Carl Purington Rollins (1880–1960) at The Montague Press, Dyke Mill in 1912. [3] Rollins was a lifelong friend of Dwiggins and a client of his from 1910 through the 1920s, first as proprietor of The Montague Press at the Dyke Mill in Montague, Massachusetts and later as Printer to Yale University. For this edition of A Description of Christ, Dwiggins drew a sprig of lilies for the title page and an initial T for the text. Rollins set the text entirely in Kennerley Old Style, designed the year before by Dwiggins’ Chicago teacher Frederic W. Goudy for New York publisher Mitchell Kennerley. [4]

The sprig of lilies in red flanked by text was undoubtedly Rollins’ idea, influenced by the title page designs Selwyn Image (1849–1930) created for Herbert Horne’s books published by Elkin Mathews in the early 1890s. Copies of the Horne title pages can be found in a Rollins scrapbook. [5] 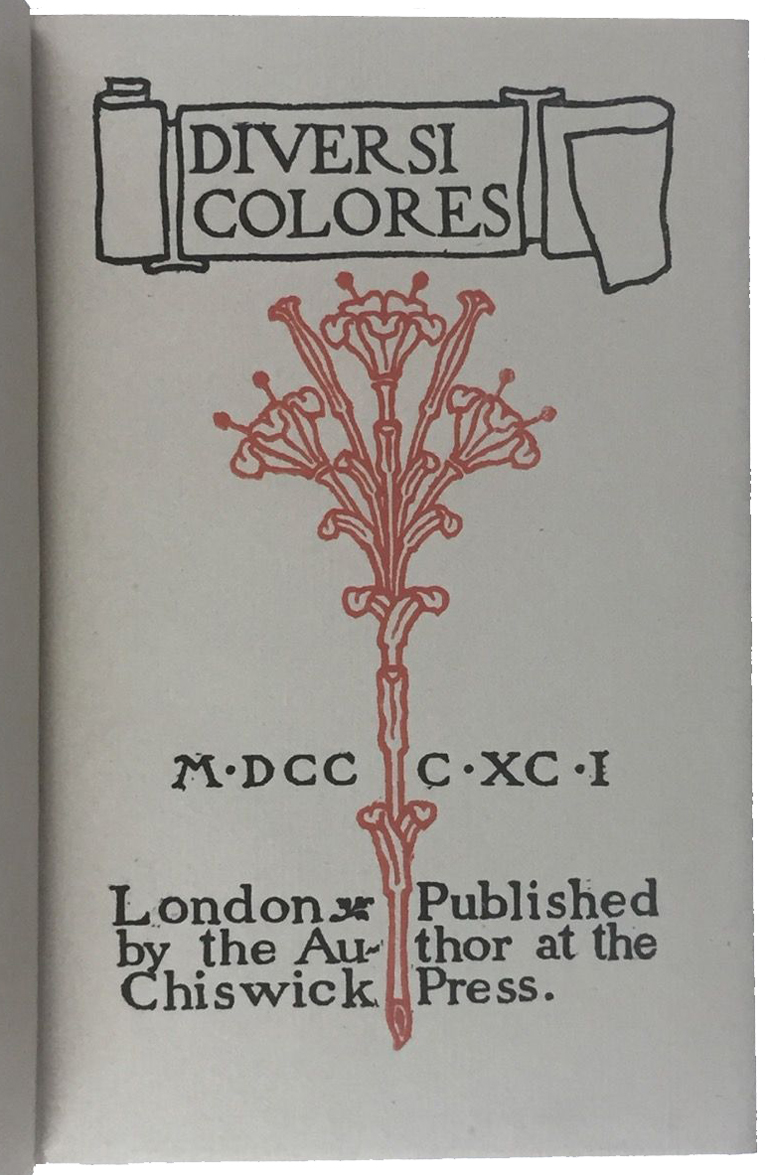 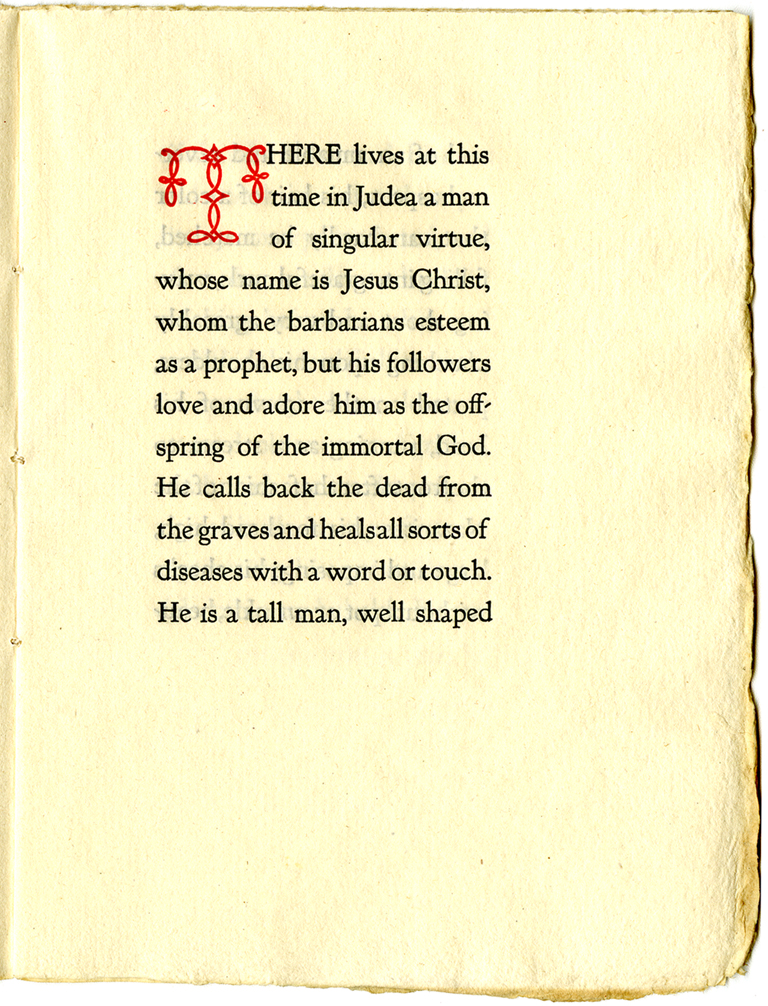 The red initial T appears to be influenced by Renaissance designs, but I have been unable to locate a model for it. Dwiggins designed it on March 12, 1912 and the booklet was printed before the end of the month. [6]

The translation and abridgement of the Publius Lentulus text used by Rollins is  a rare one. Prior to the publication of his booklet it only appears in three places, all published in 1900 or 1901. Most likely Rollins picked it up from The Literary Digest, the last of them. (I have been unable to trace its original source.) [7] Why Rollins chose that particular rendition is unclear. By 1912 there were multiple translations of the text in several languages. At least four of them, excluding the one used by Rollins, were available in books published in the United States after 1900. [8] However, despite the uncommon nature of the text, the booklet must have sold well. Certainly, it inspired the Boston publisher Alfred Bartlett (1870–1926) to commission Dwiggins, a longtime collaborator, to create a version of it for him that was issued in 1913. [9] It was printed by The Montague Press, further linking the two versions. 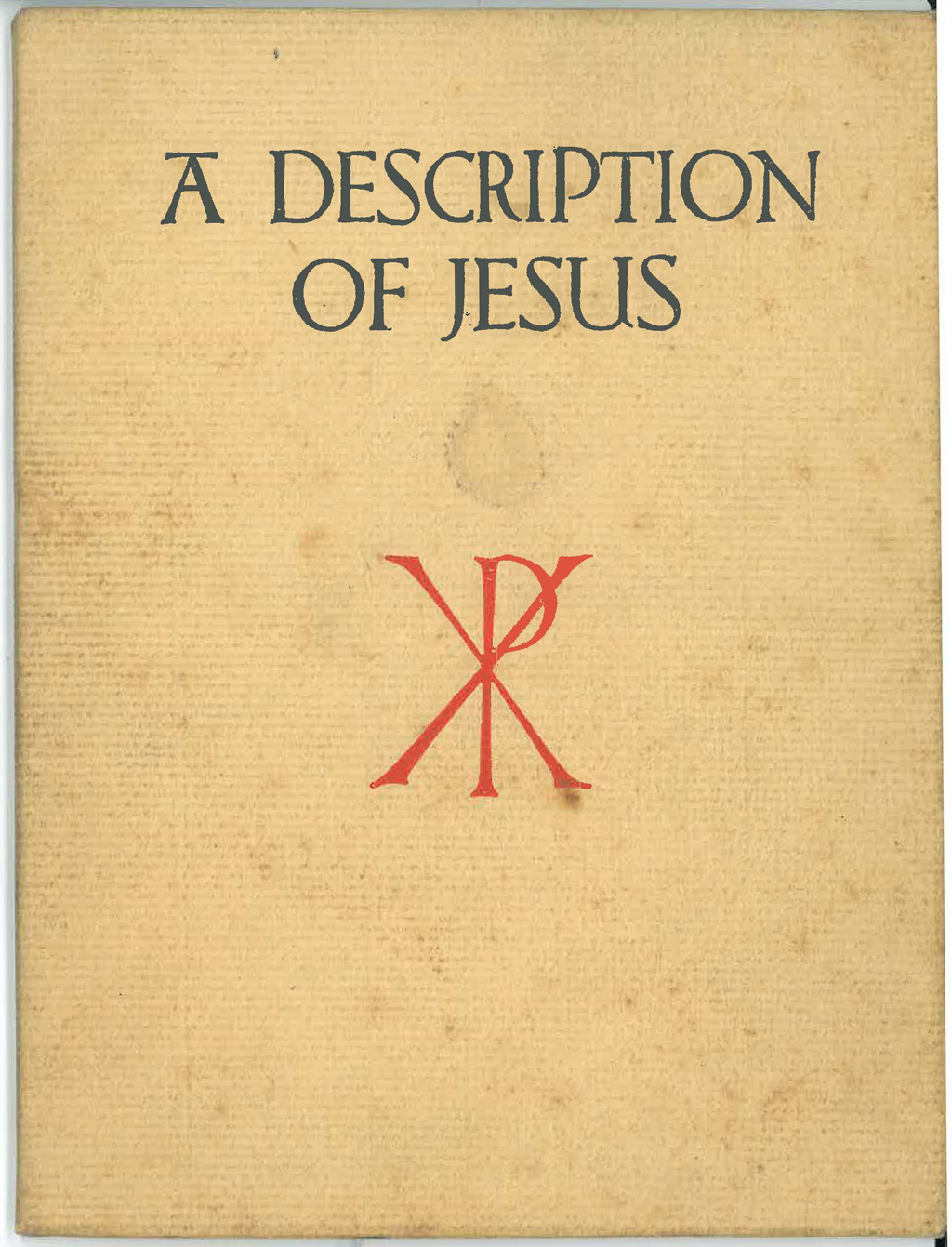 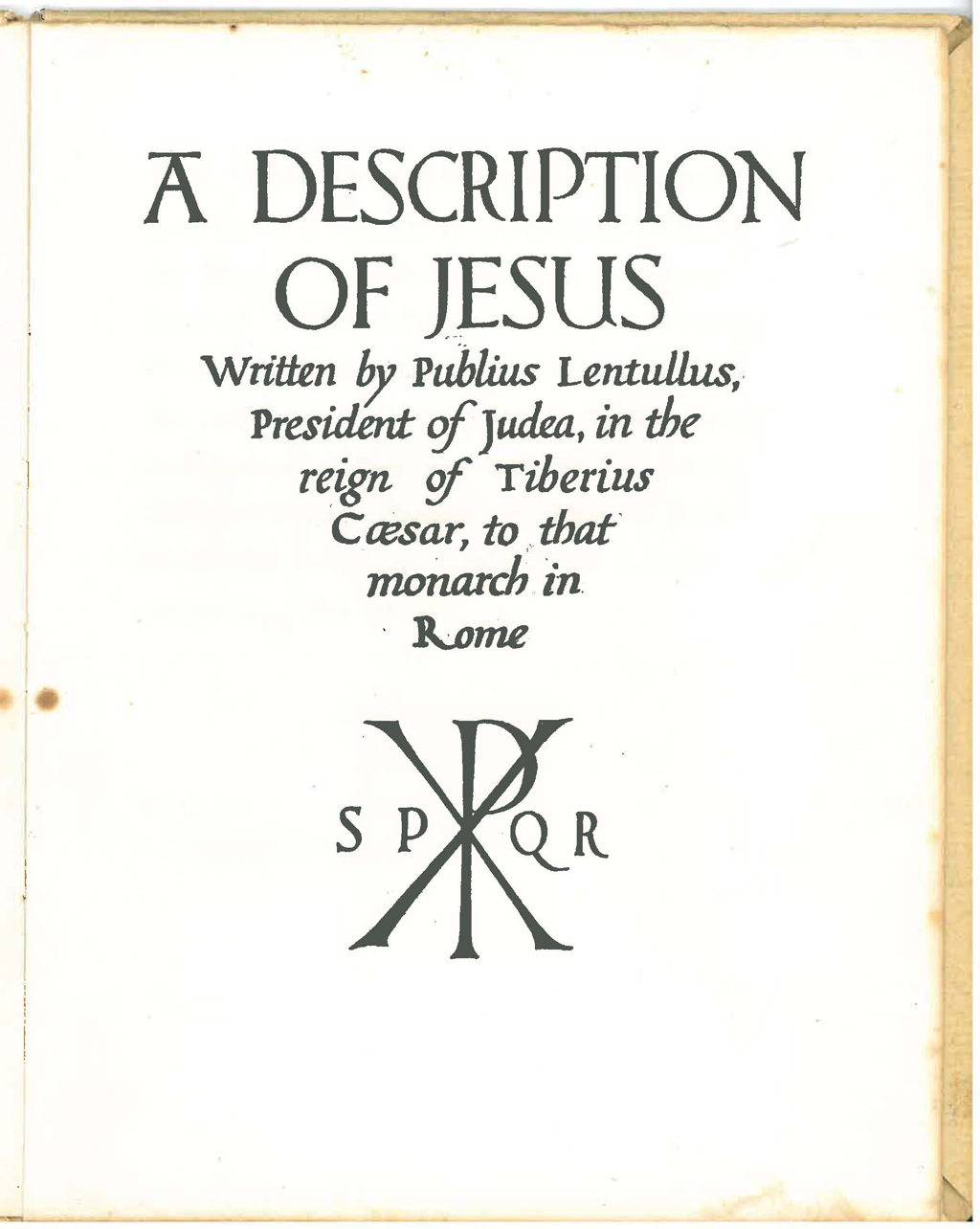 This second version of the letter from Publius Lentulus was unaccountably retitled A Description of Jesus. [10] Instead of being set in type it was entirely handlettered by Dwiggins. The cover has a Christogram (chi-rho monogram) instead of a spray of lilies and the initial T is a simple roman capital. These changes give the booklet an appearance that alludes to Ancient Rome. The 1918 catalogue of The Cornhill Company, commented that, “The artist, Mr. W.A. Dwiggins, has cast the text, title-page and cover in a severe classic mould, supplementing the simple and ancient style of the epistle.” [11]

There are a number of tiny changes from the 1912 Rollins publication besides the different wording of the title and subtitle. The Bartlett edition includes a preface that says the text was taken from a “manuscript now in the possession of Lord Kelley”. It is 12 pages instead of 10 pages because of the addition of the preface. However, the Publius Lentulus letter only occupies three pages instead of four This is because Dwiggins’ lettering is more tightly leaded than the Kennerley Old Style type used by Rollins. The text is paragraphed and, perplexingly, it omits the final two words “in every sense”. [13] 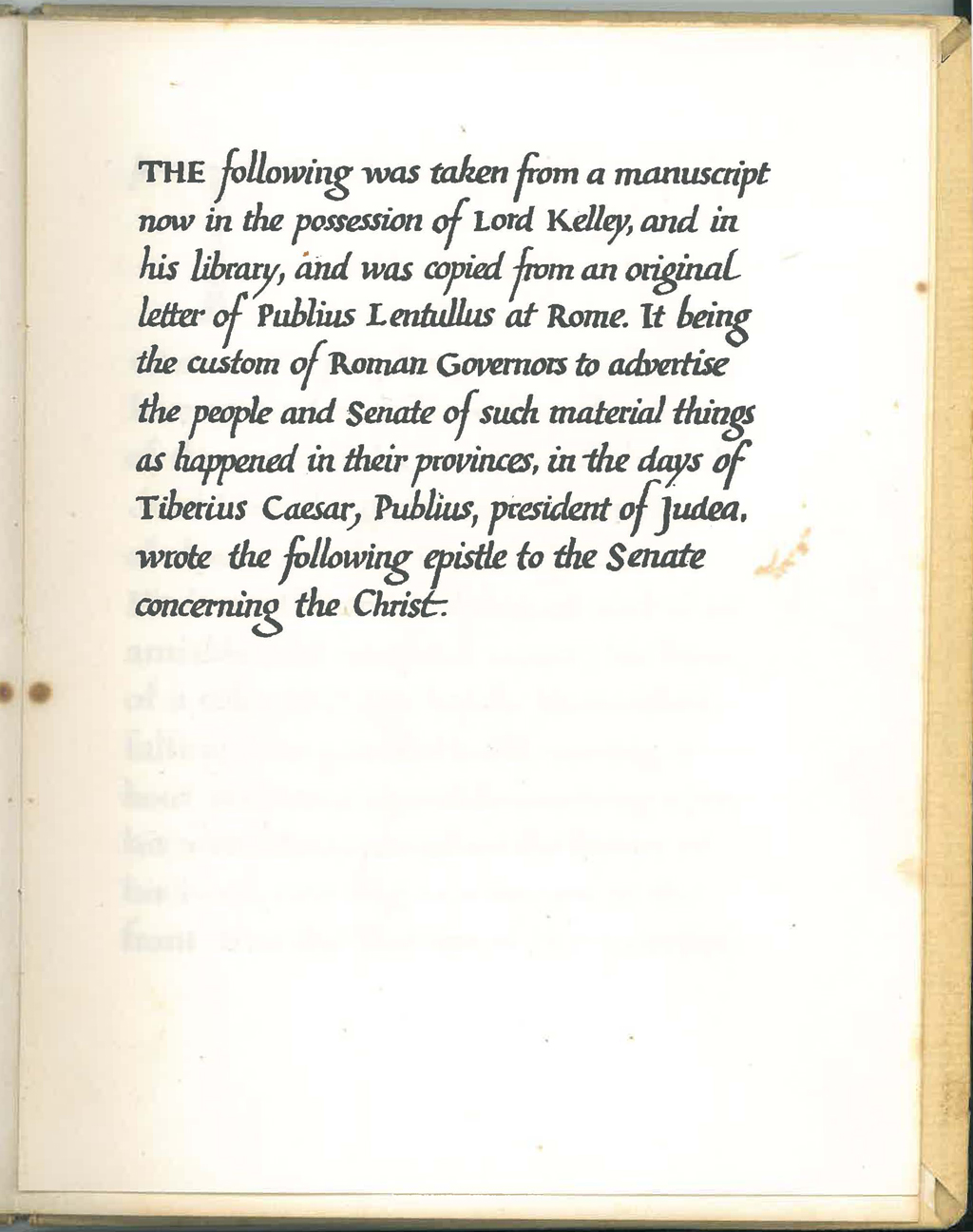 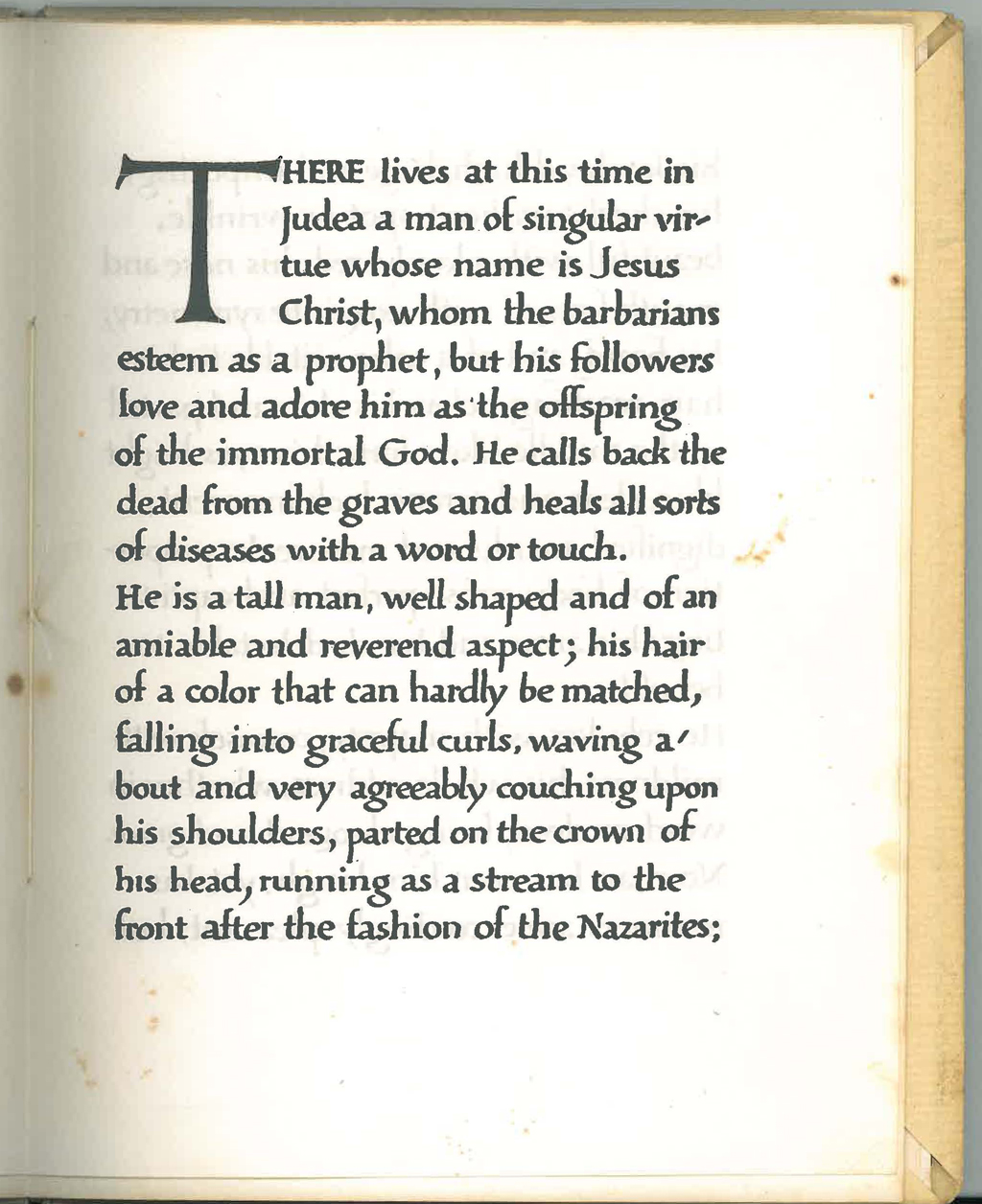 Bartlett’s version of the Publius Lentulus text must have also been commercially successful since he published a second edition. This one was not printed by The Montague press—nor by The Merrymount press which had previously had done a number of Bartlett books and booklets. [14] 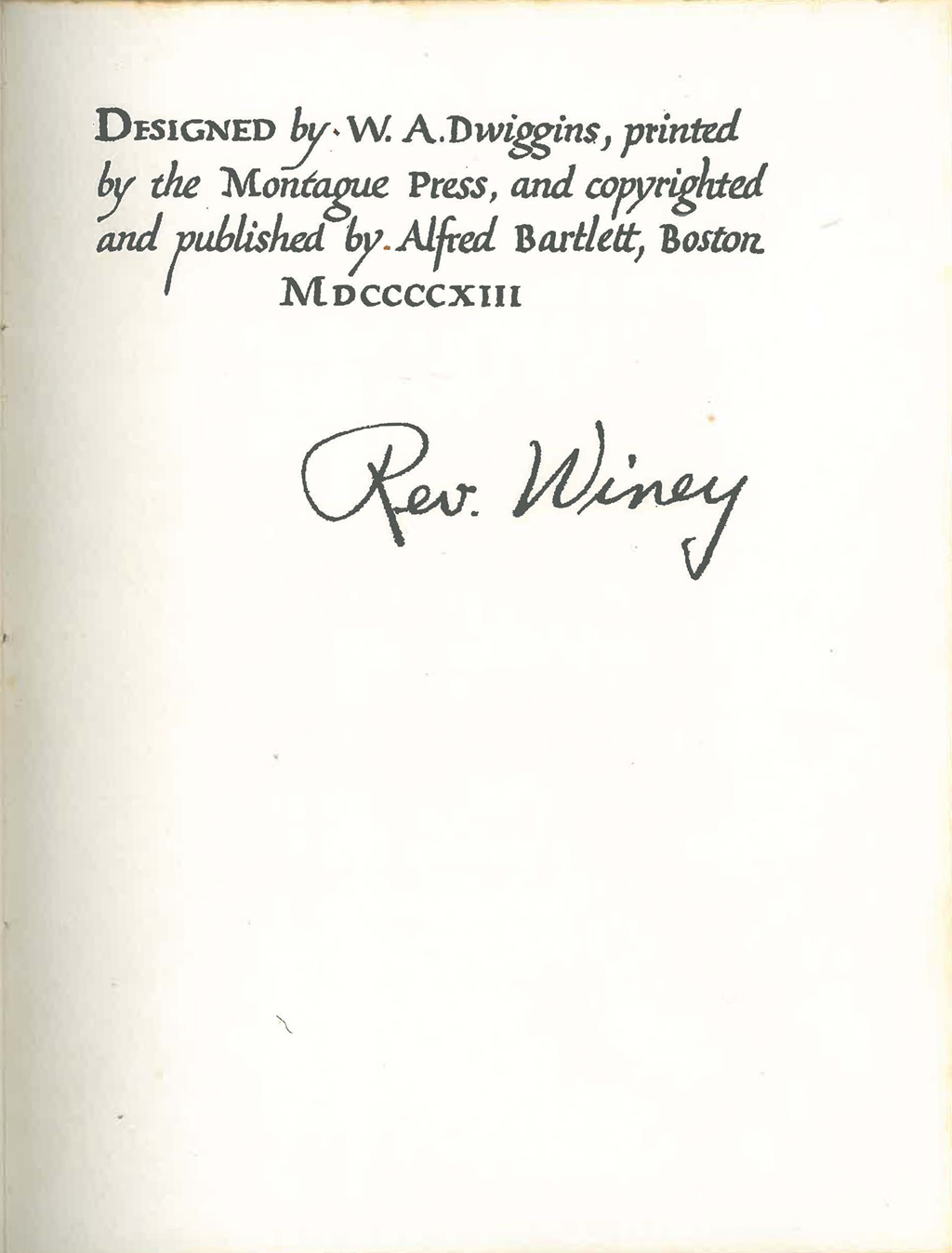 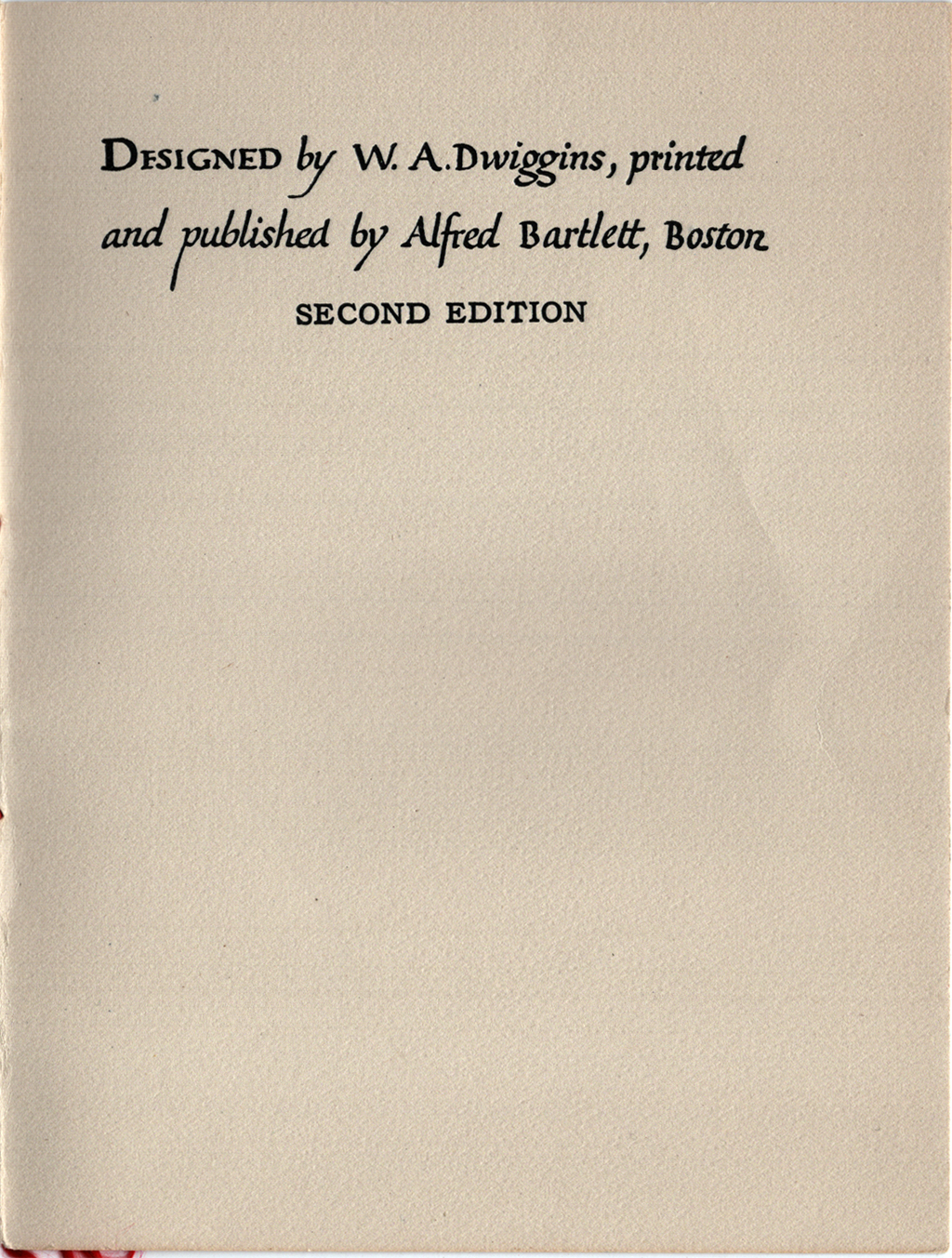 In 1922 Brad Stephens (1878–1964), a leader in direct marketing in the paper industry and a devout Christian, revised and reprinted The Montague Press edition of A Description of Christ as a promotional vehicle for the Chemical Paper Manufacturing Company of Holyoke, Massachusetts. [15] Although Stephens was Dwiggins’ principal client at the time, there is no evidence that he had any involvement in the reprint. It is peculiar that he chose to reprint the Rollins version rather than the handwritten Bartlett one, as he had reused one of Dwiggins’ illustrations for a 1911 Bartlett greeting card for a paper promotion around the same time. [16]

Although it has the red bunch of lilies on the cover, Dwiggins’ red initial T, and is set in Kennerley Old Style, the Stephens version is different from the 1912 Rollins version in a number of ways. Lentulus’ name is properly spelled. The title is set in Cloister Black (printed in red), the text has been reset with closer leading but in a wider measure with looser (and gappier) word spacing, and red rules have been added around each column. Finally, the reprint is a single tri-fold sheet. The typography and format suggest that Rollins, contrary to Gay Walker’s claim, had little if nothing to do with the reprint. [17]It is unclear if the Chemical Paper Manufacturing Company mailed out this version of the Publius Lentulus letter or if it was inserted into a publication like Direct Advertising. 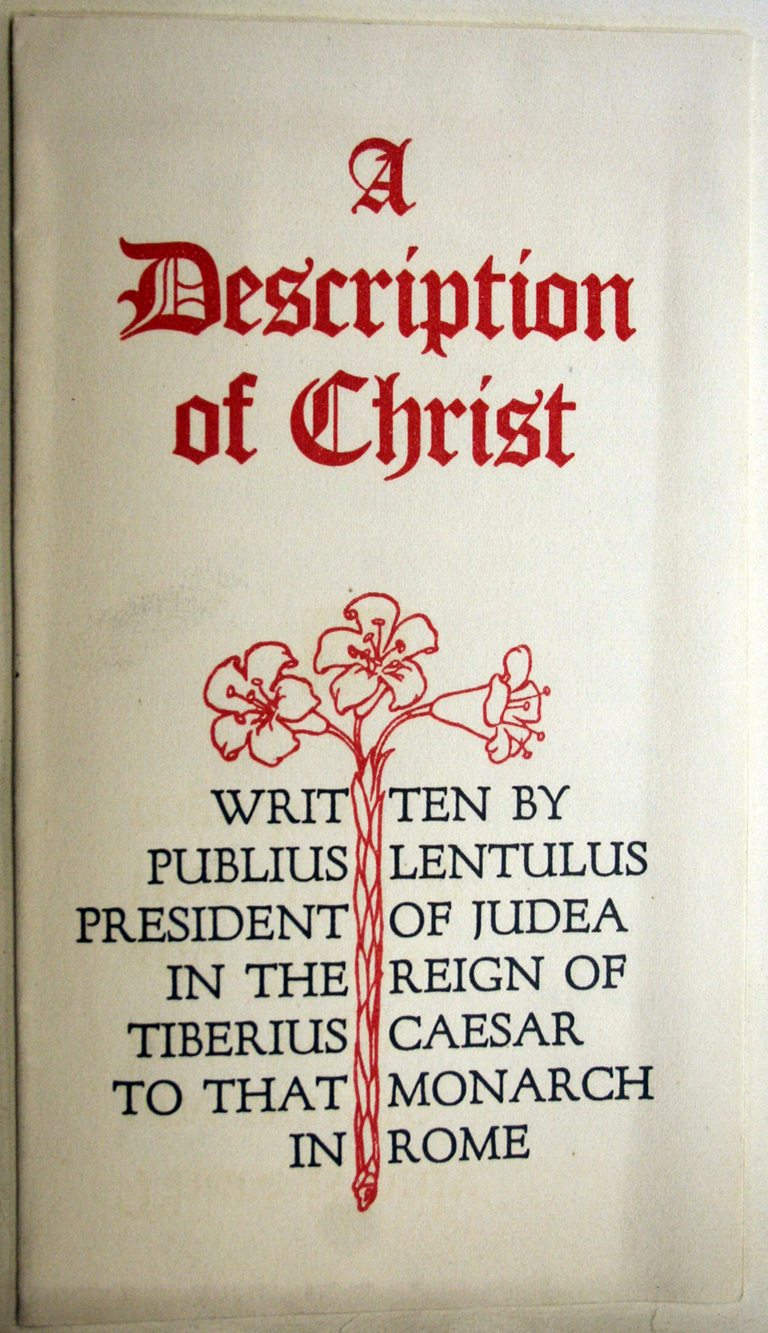 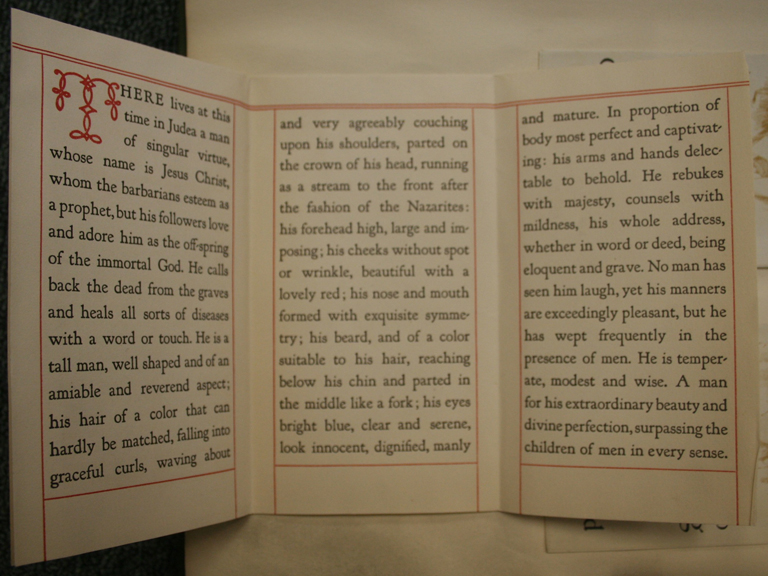 The last iteration of the Rollins version of A Description of Christ occurred in the autumn of 1950 when he distributed thirty surviving copies of the 1912 printing to members of The Columbiad Club of Connecticut as Keepsake no. 55. This was not a reprint, though Rollins did print an explanatory note to accompany each copy. [18]

There are still a number of unanswered questions regarding A Description of Christ and A Description of Jesus regarding the original source of its text, the model for Dwiggins’ initial red T, the textual changes between the two initial versions, the identity of the printer of the second edition of the bartlett version, Rollins’ role in the 1922 Stephens version, and the distribution method of the latter. Although a minor item in Dwiggins’ oeuvre, the letter of Publius Lentulus is surprisingly fascinating.

n.b. None of these editions of A Description of Christ and A Description of Jesus are in The Books of WAD: A Bibliography of the Books Designed by W. A. Dwiggins by Dwight Agner (Baton Rouge, Louisiana: The Press of the Nightowl, 1974).