The Definitive Dwiggins no. 712—Illustrations of Rome and Venice

Three illustrations of sites in Rome—fragments of the Acqua Claudia, a detail of the Lateran Cloister, and a rustic view of the Colosseum—by W.A. Dwiggins exist in the Carl Purington Rollins Papers at Yale University. The first two illustrations were created for the title pages of the two volumes of Eternal Rome by Grant Showerman (New Haven: Yale University Press, 1924). Dwiggins’ original pen-and-ink artwork for both of them has survived. [1] For the third illustration, there is only a proof labeled “W.A.D. 5”. [2]

The illustration of fragments of the Acqua Claudia used for volume I has the notation “First used in ‘Eternal Rome'” in the lower margin. This suggests that Carl Purington Rollins (1880–1960), Printer to Yale University, reused the illustration for one or more other Yale University Press books. But there is no mention of that in The Works of Carl P. Rollins by Gay Walker (New Haven: Yale University Library, 1982). [3] And I have been unable to identify or locate any other usage. 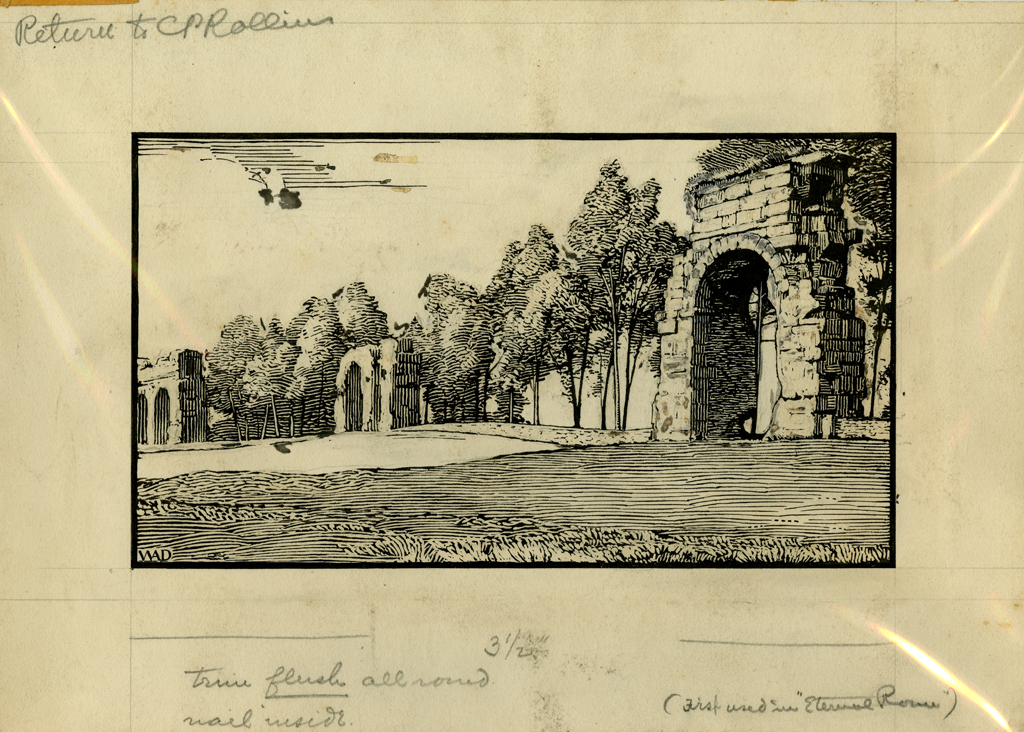 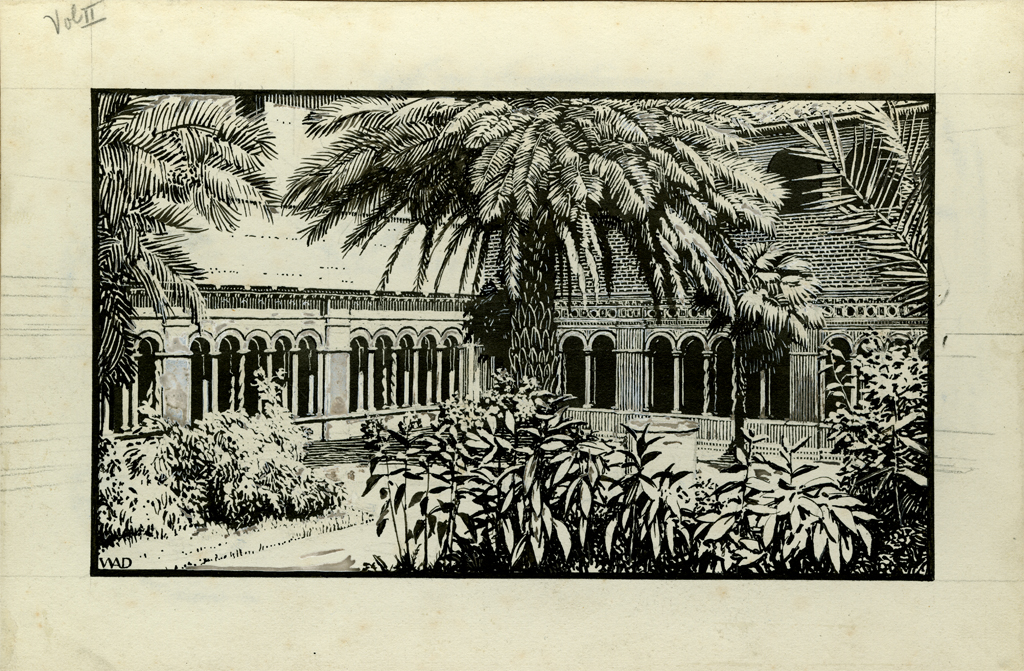 Undoubtedly, Dwiggins drew these two illustrations from photographs, but I have been unable to track down his sources. His only trip to Rome occurred in 1908. It lasted less than a week. There is no indication of what he saw while there other than “antiques”. [4]

When I first came across the third illustration, I blindly assumed that it had been made—and then rejected—for Eternal Rome since the proof is in a Yale University Press binder containing ornaments and cuts. However, once I examined it more closely I realized that its proportions were narrower and its drawing style was sketchier. These qualities—plus the double-ruled frame—make it a match for the headpieces that Dwiggins created at the request of D.B. Updike of The Merrymount Press for A Tenderfoot Abroad by Justine Grayson (Boston: W.A. Butterfield, 1907). [5]

Dwiggins designed four headpieces, a frontispiece, and a tailpiece for the book as well as its binding and jacket. The headpieces are for the ocean voyage (p. 1), Cairo (p. 27), Rome (p. 55) [see below], and Paris (p. 93). Updike rejected two drawings that Dwiggins made for Paris and Rome, calling the latter “too 18th century”. [6] His comment may have referred to this illustration of a decayed Colosseum with a farmhouse adjoining it. But how did it end up at the Yale University Press? Perhaps Dwiggins submitted it for Eternal Rome, Rollins proofed it, and then it was rejected again. 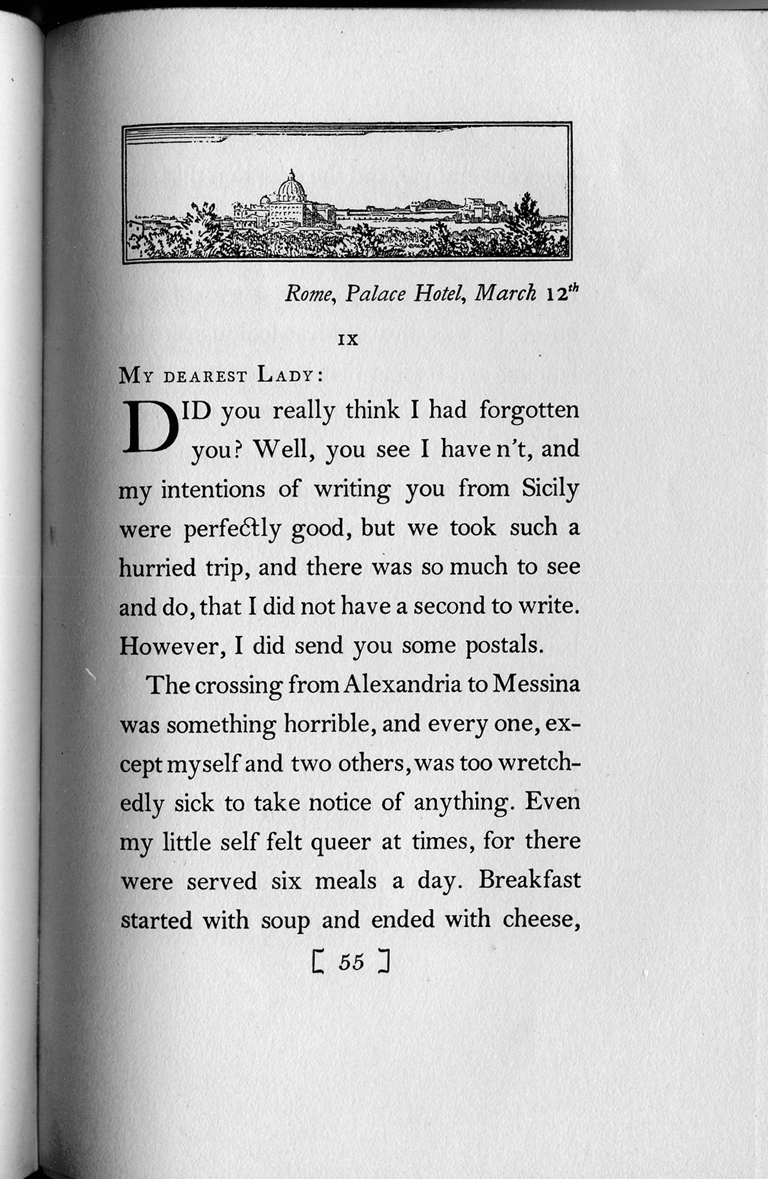 I have yet to identify Dwiggins’ source for the Romantic illustration of the Colosseum. It was surely a painting or engraving, but none of those I have found online has a similar farmhouse in the foreground. [7] Giovanni Paolo Panini (1691–1765) created paintings in which he jumbled up the monuments of ancient Rome in ways that defied reality. They are referred to as capricciosi. Perhaps Dwiggins’ illustration is in that imaginary vein.

There is another drawing by Dwiggins intended, but not used, for A Tenderfoot Abroad. It shows a gondolier in the Venetian lagoon with Isola di S. Giorgio Maggiore in the background. What is peculiar is that a proof of the illustration exists in the job ticket for the book, but there is no reference to it in either the correspondence between Updike and Dwiggins or in the Merrymount Press business records. [8] Thus, I have no idea why the drawing was rejected.

The proof is marked “XII,” indicating it was intended as the headpiece for “Letter XII: From Venice: April 18th.” There is no headpiece for that chapter of A Tenderfoot Abroad, suggesting that the illustration was not rejected due to its content or quality, but because Updike changed his mind about which chapters he wanted to have illustrated. His decision was unfortunate since Dwiggins’ gondolier illustration is livelier than the ones finally used in the book.

Dwiggins created the gondolier drawing from either a photograph or an existing illustration supplied by Updike. I suspect it was a late 19th century photograph given the gondolier’s dress and the presence of the felze which was abandoned in the early 20th century. However, I have been unable to find the specific source. [9]