The Definitive Dwiggins no. 300—W.A. Dwiggins meets Alfred A. Knopf

Tsushima by A. Novikoff-Priboy (New York: Alfred A. Knopf, 1937) is an account of The Battle of Tsushima (May 27–29, 1905) in the Japanese Sea during the Russo-Japanese War of 1904–1905. The Japanese fleet completely destroyed the Russian fleet in what has been called “naval history’s first decisive sea battle fought by modern steel battleship fleets”. It has been characterized as the “dying echo of the old era—for the last time in the history of naval warfare, ships of the line of a beaten fleet surrendered on the high seas”. [1] The author, A. Novikoff-Priboy (or Aleksey Silych Novikov-Priboi) (1877–1944), stationed on the Russian battleship Oryol, was a first-hand witness to the battle. 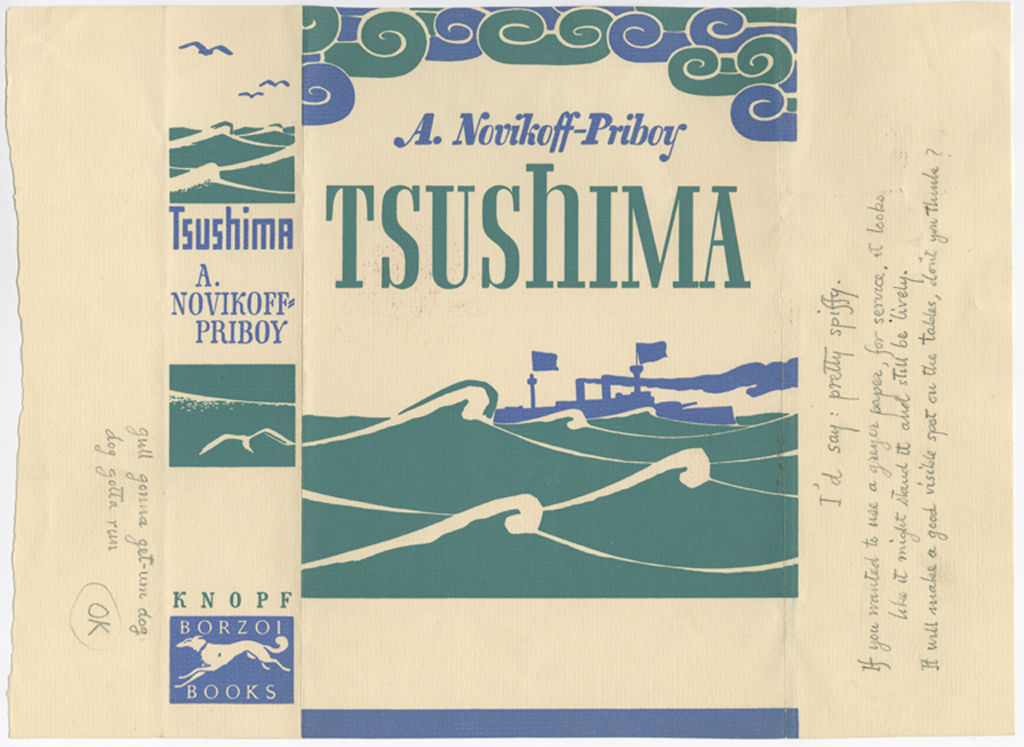 Annotated proof of jacket for Tsushima by A. Novikoff-Priboy (1936). Design, illustration, and lettering by W.A. Dwiggins. Image courtesy of the Harry Ransom Center, University of Texas. 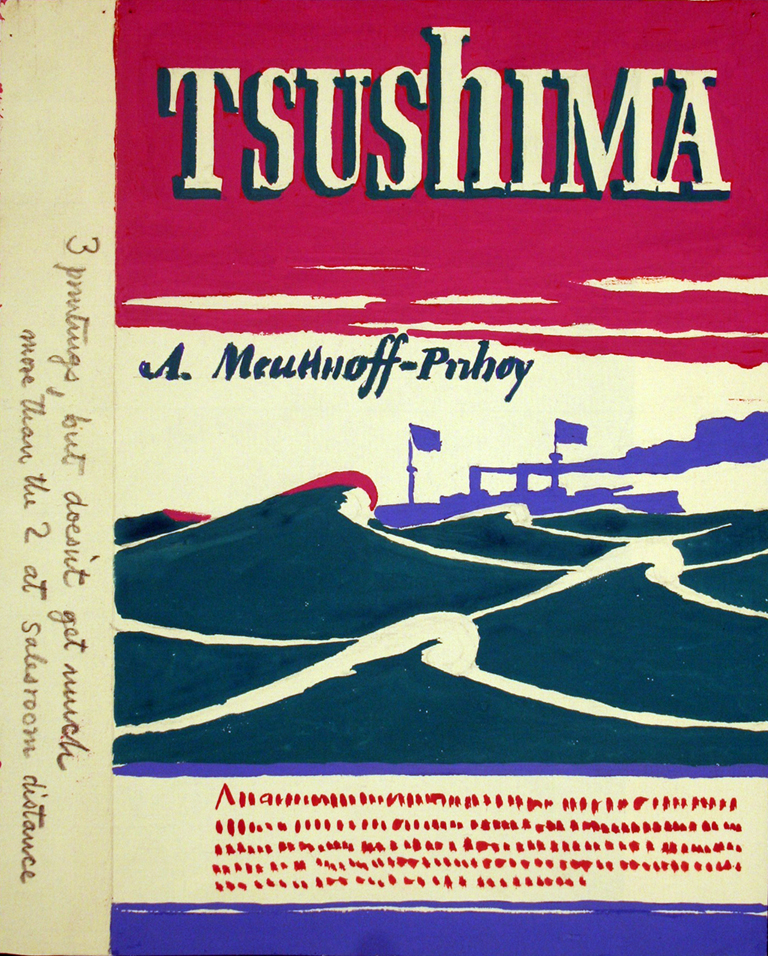 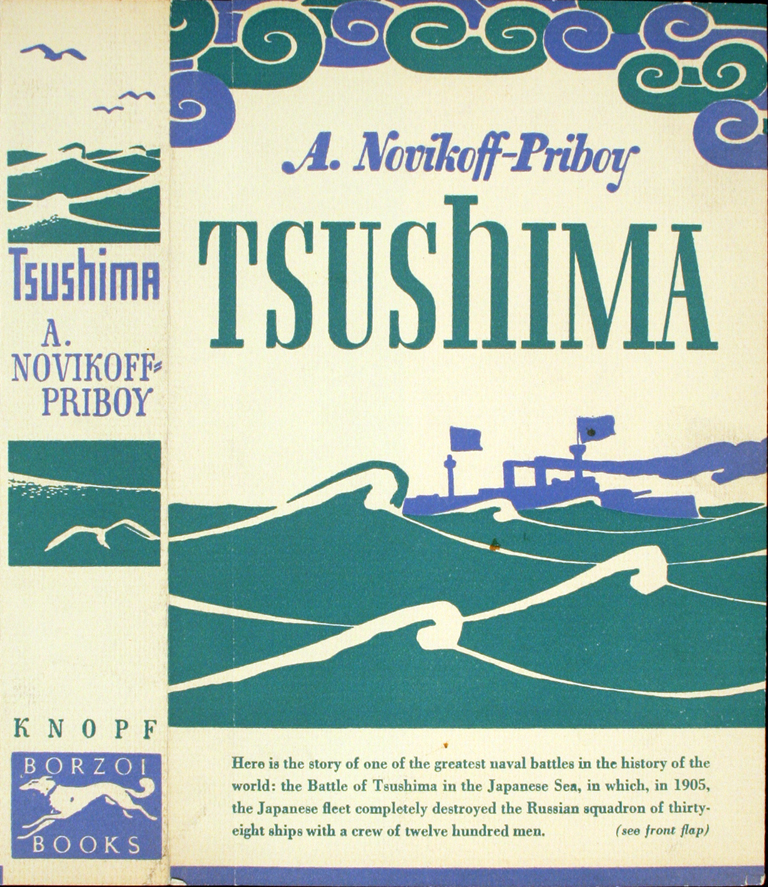 Jacket for Tsushima by A. Novikof-Priboy (New York: Alfred A. Knopf, 1937). Design, illustration, and lettering by W.A. Dwiggins.

Jacket
W.A. Dwiggins was responsible for the complete design of Tsushima, from the jacket to the colophon. For the jacket he drew a battleship—probably Admiral Togo’s flagship, the Mikasa, though it could also be the Oryol—steaming through the churning Japanese Sea. Overhead are stylized clouds in a Japanese manner. The jacket spine has two snippets of sea waves with seagulls circling overhead. “[G]ull gonna get-um dog/ dog gotta run,” Dwiggins wrote in the margin of a proof of the jacket, referring to the Knopf borzoi being under attack. [2]

Although he ok’ed the proof, he briefly toyed with the idea of a variant design in three colors (crimson, purple, and dark blue) instead of two. He kept the battleship in the sea illustration, moved the title to the top, and eliminated the stylized clouds. But Dwiggins nixed the design, noting on the side of the rough, “3 printings, but doesn’t get much more than the 2 at salesroom distance”. [3] The purple and aquamarine version was used instead. Dwiggins called it “pretty spiffy.”

Dwiggins designed the jacket for Tsushima during a short period in which he was created a number of distinctive jackets for Knopf books before telling Alfred A. Knopf he did not want to design any more of them. At the same time he was working on the Tsushima jacket he was also creating jackets for The Sea of Grass by Conrad Richter, Zest for Life by Johan Wøller, The Life of Richard Wagner by Ernest Newman, and A Short History of Music by Alfred Einstein. “I judge the way to do is to carry on all these things at once, lightly hopping from piece to piece, like a plumber,” he wrote Sidney R. Jacobs (1909–2000), the production manager at Knopf. [4] 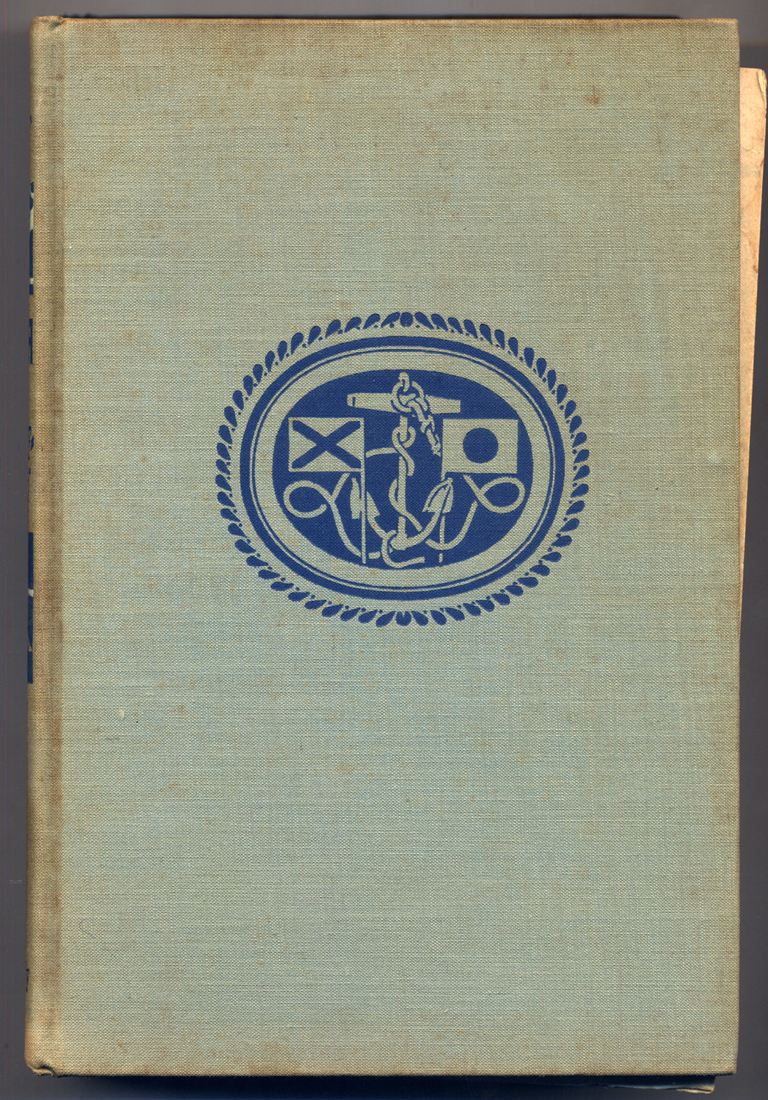 Binding front of Tsushima by A. Novikoff-Priboy (New York: Alfred A. Knopf, 1937). Design and illustration by W.A. Dwiggins.

Binding
For the binding spine of Tsushima, Dwiggins reused the design of the jacket spine. But for the binding front he created a mark of an anchor, entwined with the flags of the Imperial Russian Navy and the Imperial Japanese Navy, within an oval surrounded by a border that could be interpreted as the twist of a naval rope. It is stamped in blue. 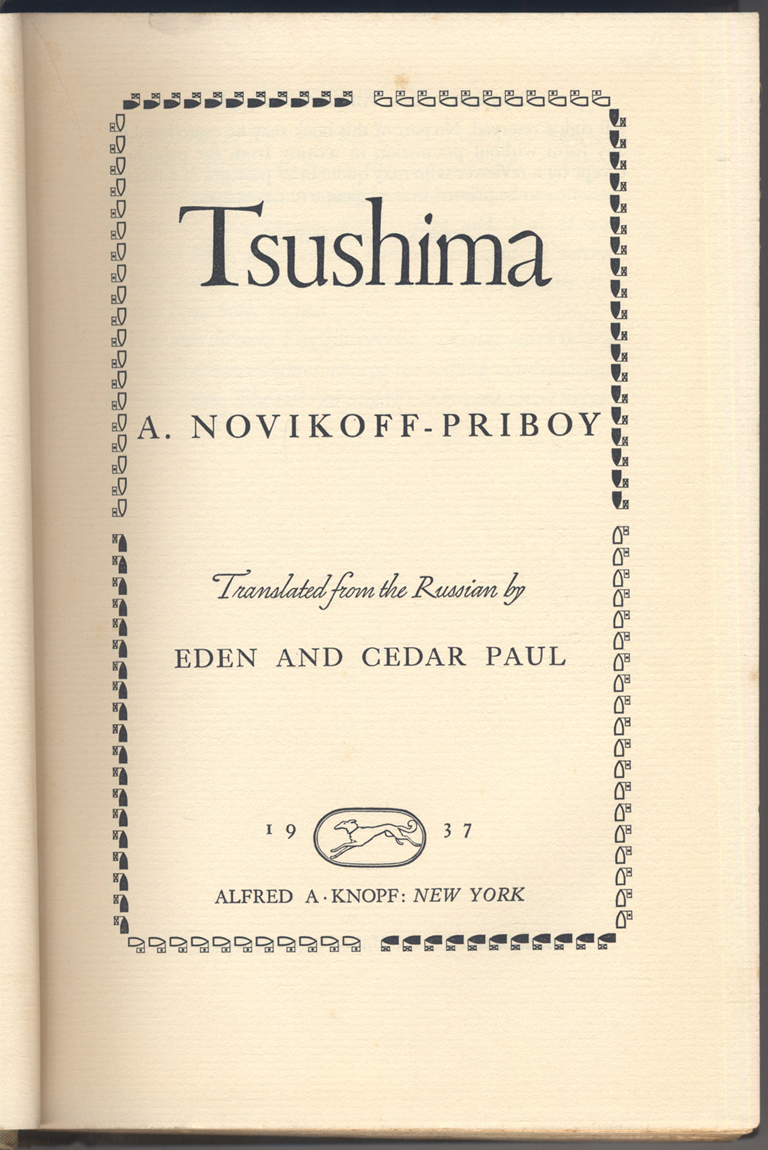 Interior
In July 1936, Dwiggins wrote to C.H. Griffith, head of type design at Mergenthaler Linotype, that he was working on a book for Knopf about the battle of Tsushima. He told him it “cries out for two florets in the running head—two symbols of different fleets that occur in the charts in the book. The runheads [sic] have to be Lino set, 12 Janson, too expensive to set ’em by hand with ATF make of florets.” He asked Griffith to do him a special favor and have the matrix department make the two symbols for him. [5]

Dwiggins wanted the florets, one for each of the two navies, to use on the title page and as part of the running heads throughout the book. He created a border for the title page of alternating groups of ship icons—an open one with a Japanese flag and a solid one with a Russian flag—to suggest the battle. Then he set up two opposing groups of ships for each chapter opening and a single ship from each navy on opposite pages of a spread.

Dwiggins was well known for his lettering skills. He employed them extensively in his jacket and binding designs for Knopf, but he rarely did so for the interior of books. Tsushima is one of only a handful of Knopf books to have a lettered title page. 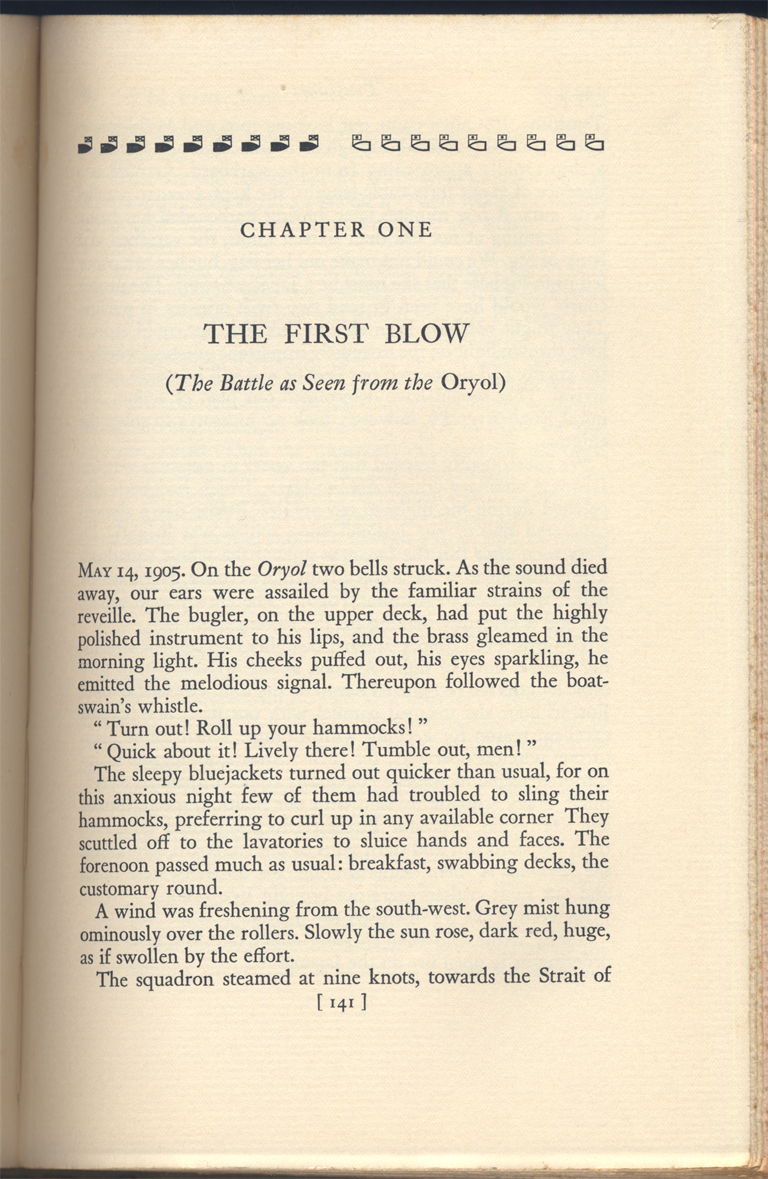 Opening of Chapter One of Tsushima by A. Novikoff-Priboy (New York: Alfred A. Knopf, 1937). Typography and ornaments by W.A. Dwiggins.

Colophon
In the first few years after Dwiggins began regularly designing complete books for Knopf, he was frequently asked to write the text for the colophons. Tsushima was one of those. In its colophon he emphasized the special fleet symbols:

This book was set on the Linotype in GRANJON, a face designed by Mr. George W. Jones of London, one of England’s distinguished printers. The Granjon type ranges in the “old style” family. The symbols of fleet units used as ornaments—suggested by the charts of the Appendix—were cut and cast particularly for this volume. The designer’s aim in general was to construct a compact and vigorous page as a vehicle for the forthright narrative. The volume was designed by W.A. Dwiggins.

The book was set up, printed and bound by The Plimpton Press, Norwood, Massachusetts. The paper was made by [blank space]. [6] 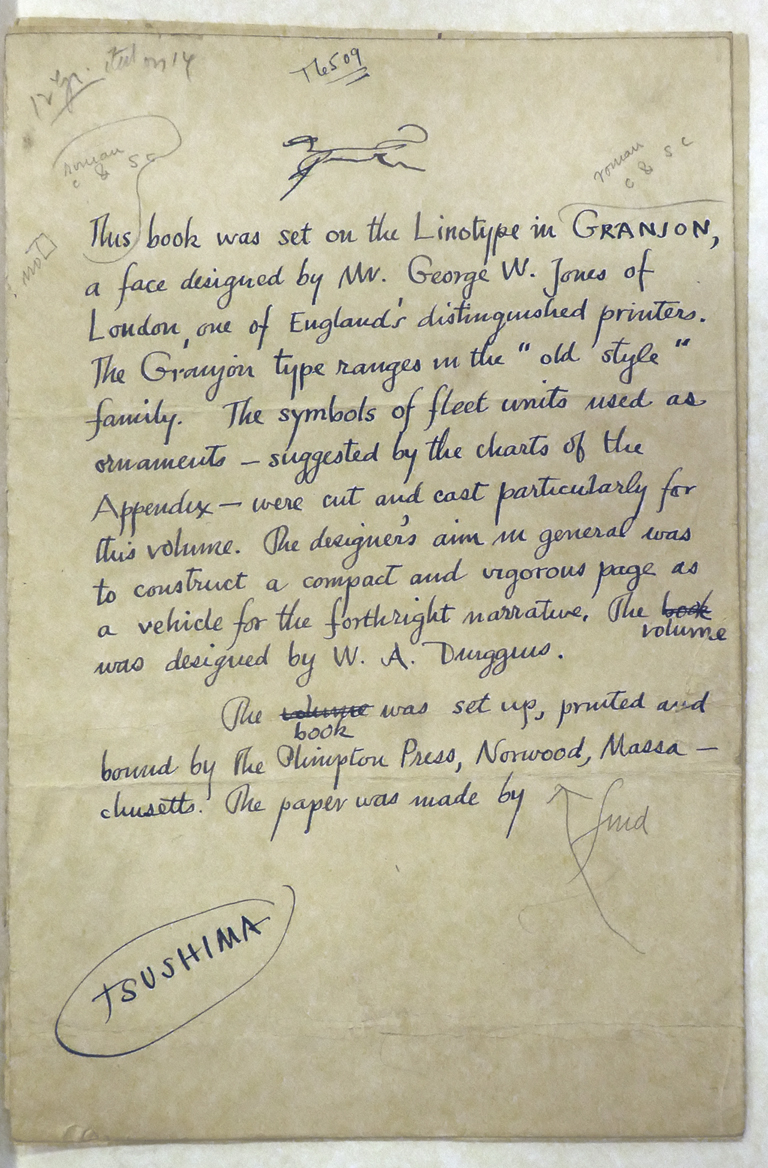 Draft for colophon of Tsushima by W.A. Dwiggins. Image courtesy of the Harry Ransom Center, University of Texas.

Background of War
Tsushima was published in January 1937. Soon thereafter Jacobs appropriated Dwiggins’ interior typography scheme for Background of War by the Editors of Fortune (New York: Alfred A. Knopf, 1937). [7] His actions were not unusual. Jacobs often used Dwiggins’ typography and binding designs as the basis for books he designed—with Dwiggins’ approval and, on occasion, his feedback as well. [8] For Background of War he ignored the binding of Tsushima with its irrelevant naval device and ocean scene and instead swiped the Dwiggins-designed decorations from Stages on the Road by Sigrid Undset (New York: Alfred A. Knopf, 1934). 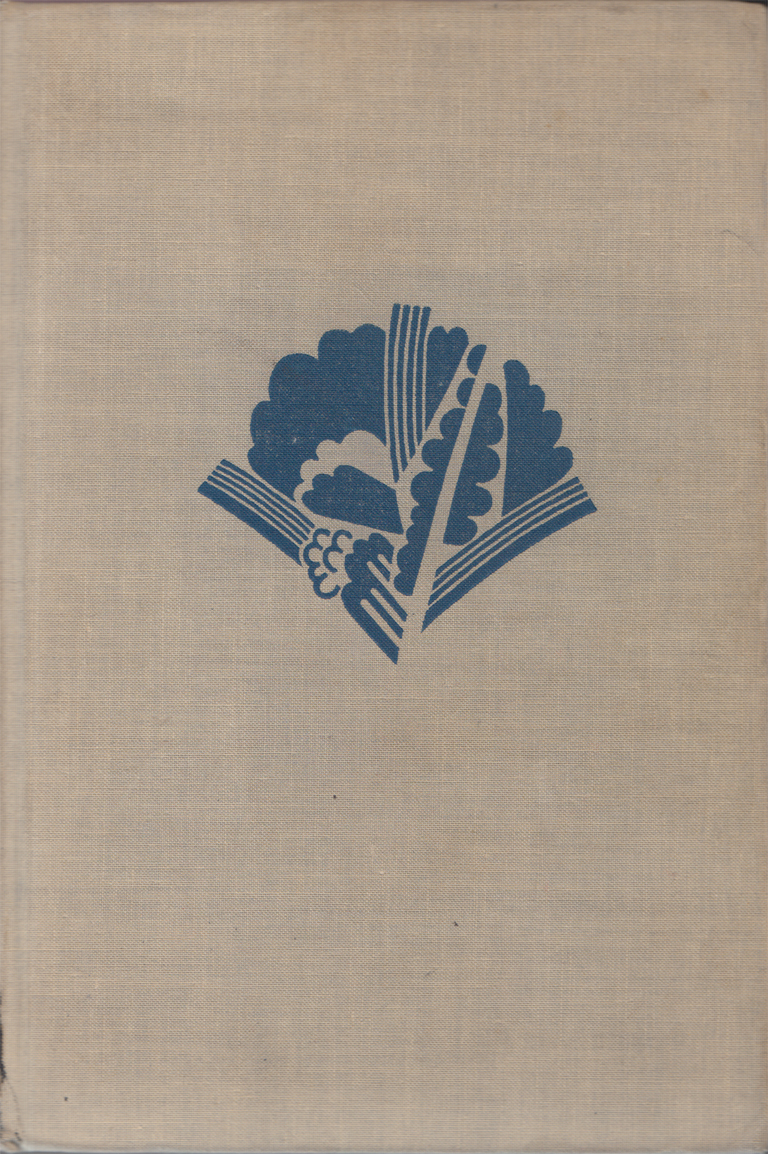 Binding front of Background of War by the Editors of Fortune (New York: Alfred A. Knopf, 1937). Ornament by W.A. Dwiggins. 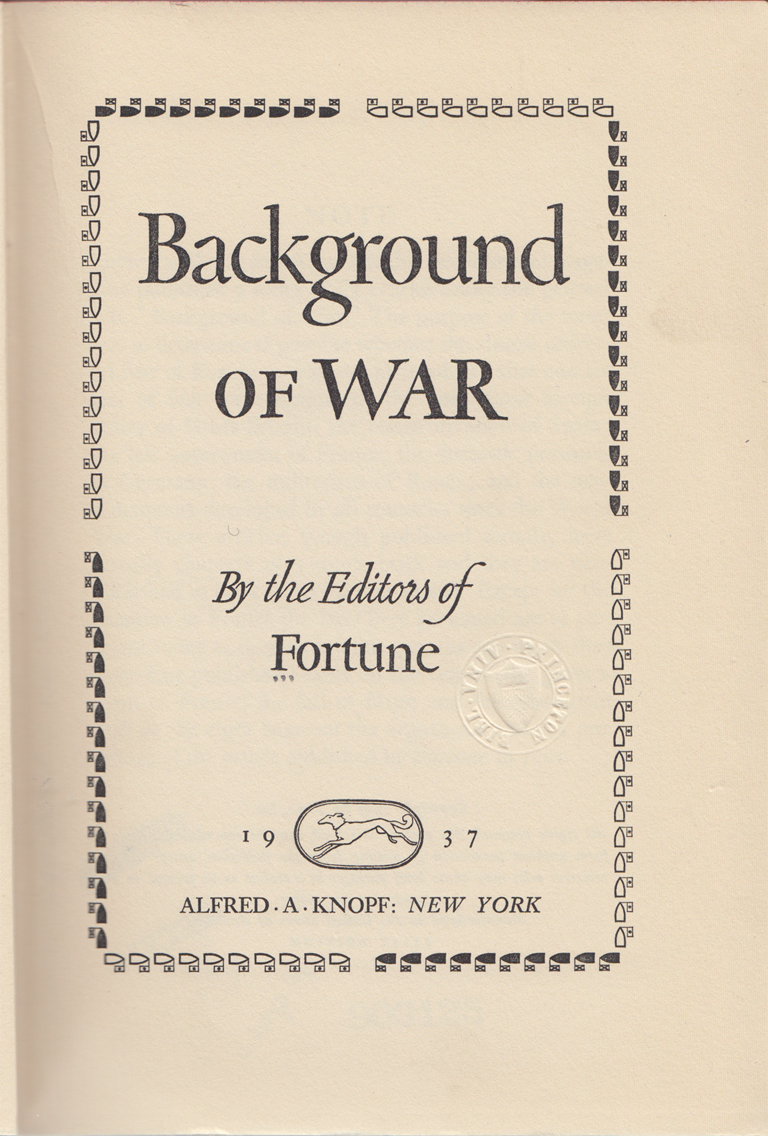 Title page of Background of War by the Editors of Fortune (New York: Alfred A. Knopf, 1937). Typography probably by Sidney A. Jacobs following W.A. Dwiggins; lettering probably by Sam Bass. 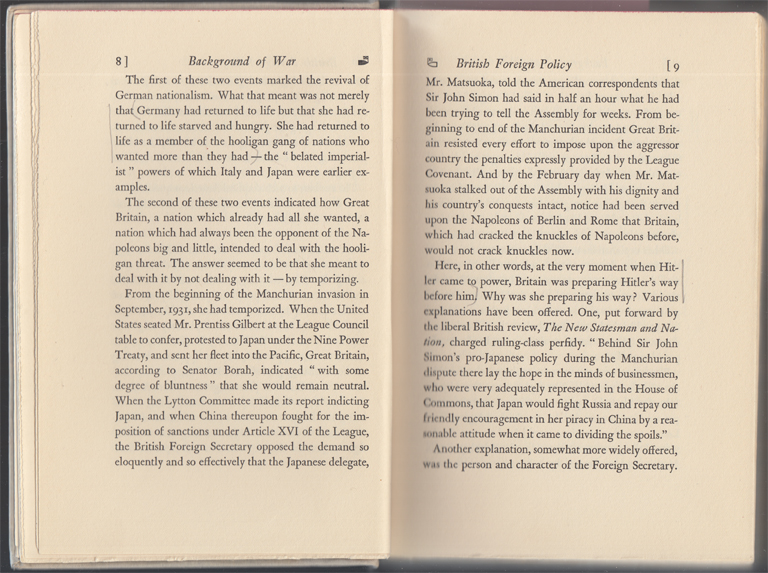 Double page spread from Background of War by the Editors of Fortune (New York: Alfred A. Knopf, 1937). Typography probably by Sidney A. Jacobs following W.A. Dwiggins.

Jacobs imitated Dwiggins so closely with Background of War that he even hired someone (probably Sam Bass) to do lettering in a similar style for the title page. Jacobs and Knopf made no attempt to hide the fact that the book was a Dwiggins imitation. It’s colophon plainly states, “The typography and  binding are based on designs by W.A. Dwiggins.”

Advertising
I only discovered the use of the Tsushima naval florets in Background of War by accident. How many other Knopf books incorporated them? I am sure there are others because the florets also appeared in Knopf advertising. In September 1949, Alfred A. Knopf sent Dwiggins an advertisement the company had done that repeated the Tsushima naval border. [9] The advertisement below may be the one that Knopf sent or another one from the same Fall 1949 advertising campaign.

Knopf wanted feedback on the overall design, something that he had periodically asked of Dwiggins since 1936. Unfortunately, Dwiggins’ response does not exist, but the responses he did make to Knopf’s other requests always centered on typography and typeface choices. I suspect that if he commented on the naval florets at all, he would have pointed out how incongruous they appear in conjunction with a book of sensitive poetry and Three Plays by the Existentialist philosopher Jean-Paul Sartre. 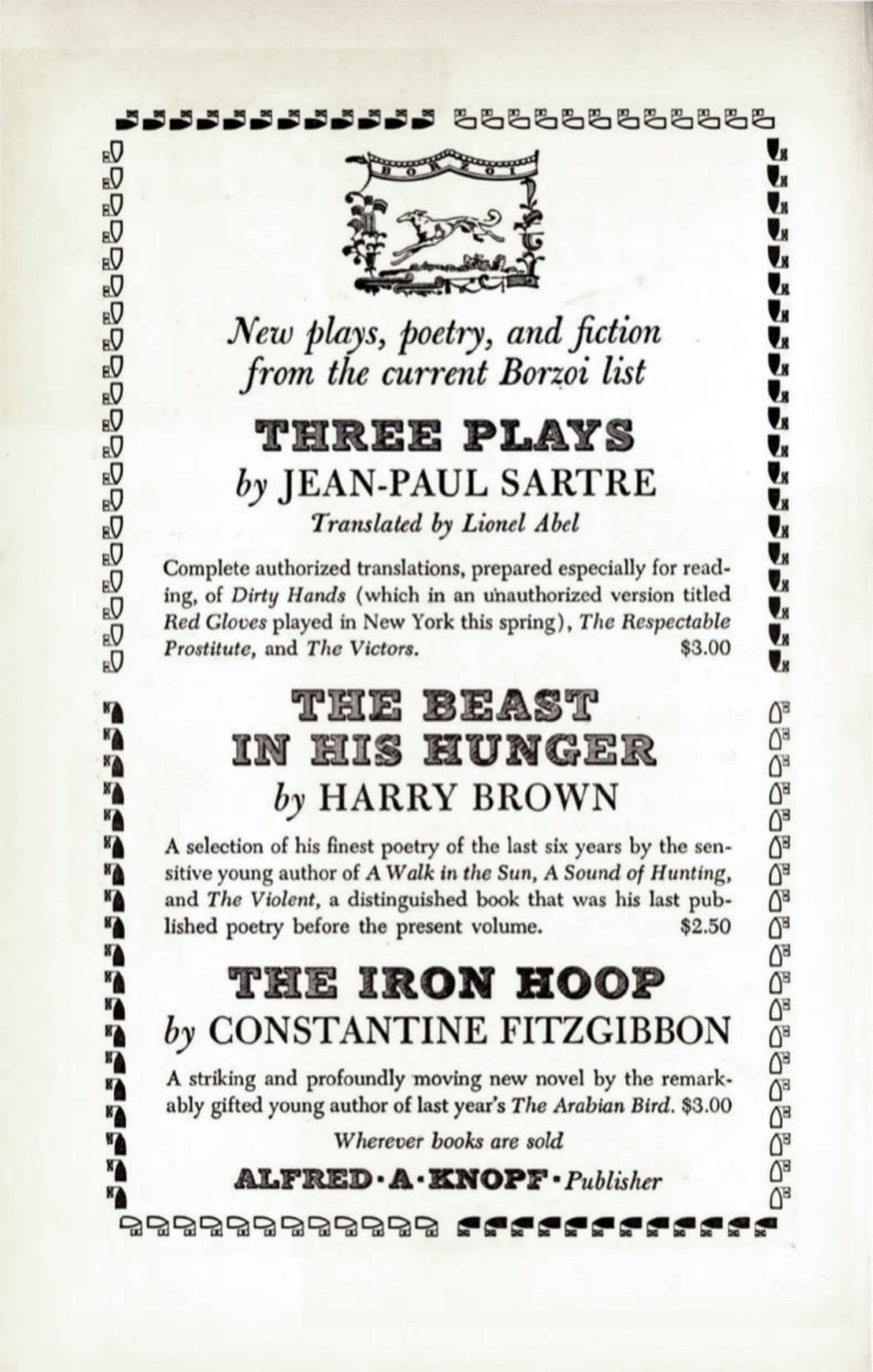 Tsushima is an instance not only of a book that became the basis for other Knopf books typographically, but it is an early example of the interaction between Dwiggins’ two main clients in the latter half of his career, Alfred A. Knopf and Mergenthaler Linotype. Subsequent posts will discuss the use of Linotype faces and ornaments in Dwiggins-designed books as well as other “favors” the company did for him in connection with his book work.

Tsushima is item 37.09 in The Books of WAD: A Bibliography of the Books Designed by W. A. Dwiggins by Dwight Agner (Baton Rouge, Louisiana: Press of the Nightowl, 1974).