According to its back jacket flap copy, Rex Ingram (1892-1950), the author of Mars in the House of Death, was a dockworker, assistant to sculptor Lee Lawrie, silent film director, and movie studio owner before becoming a novelist. [1] The novel, Ingram’s first (and only one), is about a bullfighter and his tragic romances. Kirkus Reviews called it a “romance of the Gothic-impossible variety”. [2] W.A. Dwiggins designed the book for Alfred A. Knopf from jacket to colophon. [3] 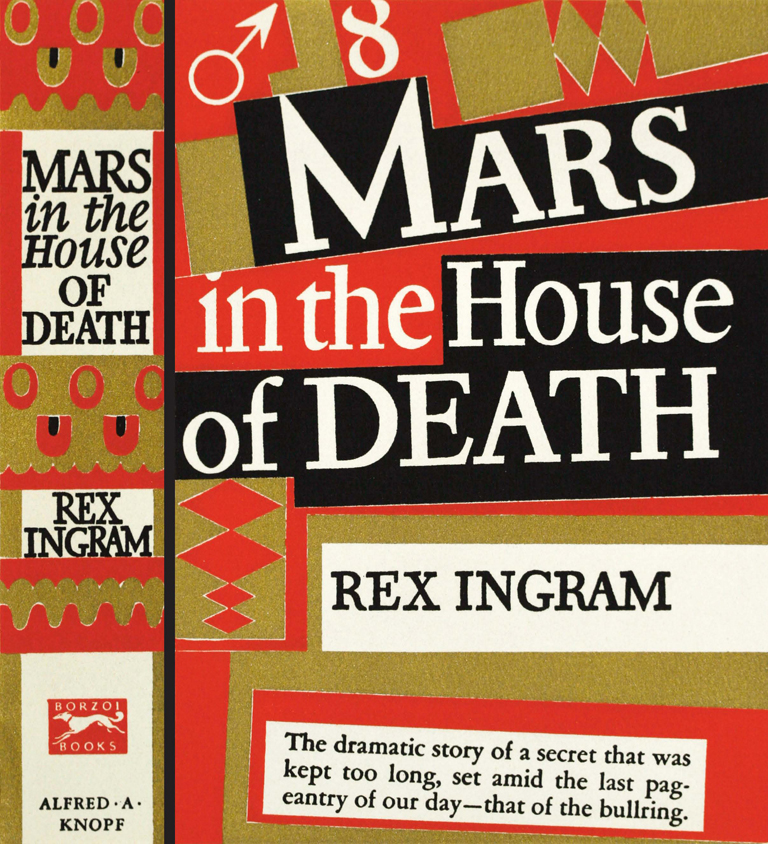 Jacket (spine and front) of Mars in the House of Death by Rex Ingram (New York: Alfred A. Knopf, 1939). Design and lettering by W.A. Dwiggins.

Jacket
The jacket for Mars in the House of Death is among the most vivid that Dwiggins created. Its black, red, and gold color scheme is eye-catching and its tilted title— handlettered in a chunky roman letter—provides an additional liveliness. Dwiggins explained the symbolism of the design to Sidney R. Jacobs, Knopf’s production manager:

He had no need to explain the significance of the colors. Red is the color of the bullfighter’s cape (capote de brega) as well as one of the most common ones for the traje de luces (“suit of lights”), whose name comes from its sequins and reflective threads of gold. Handlettering the title on the jacket spine enabled Dwiggins to tightly pack the words vertically in a way that was not possible with metal type. 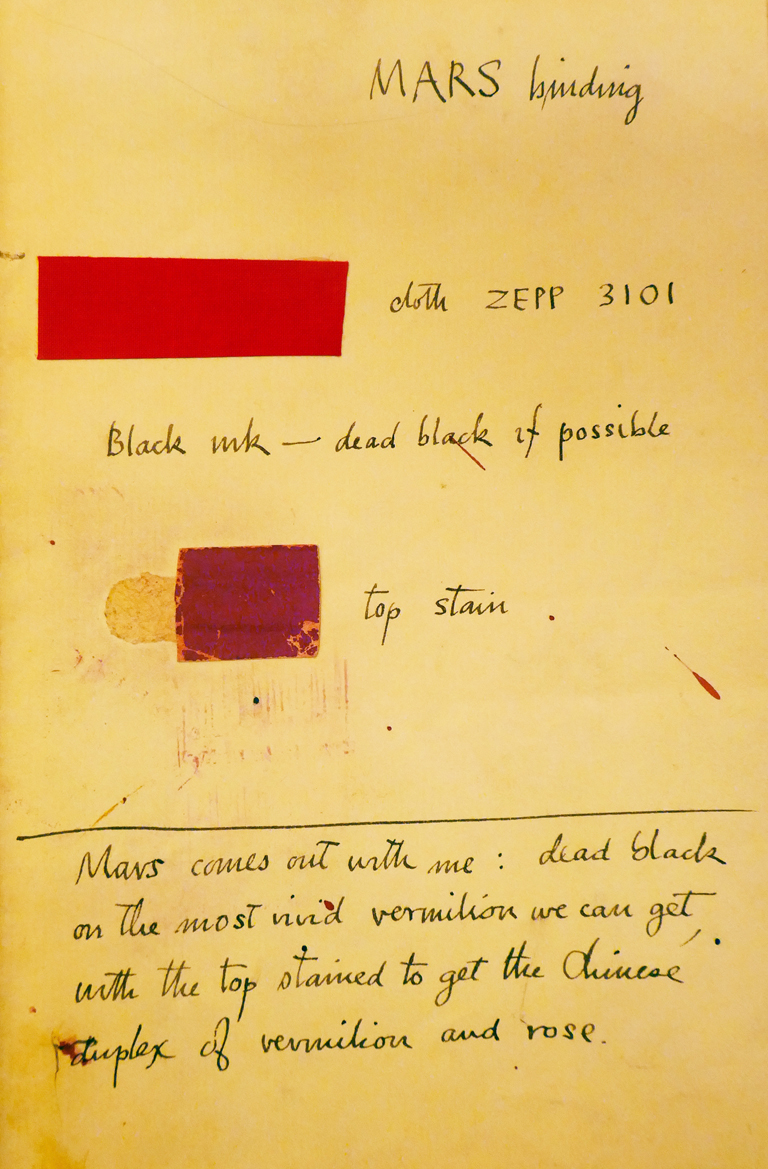 “MARS binding” (n.d.). Notes by W.A. Dwiggins on binding cloth and ink colors, and top stain color for Mars in the House of Death by Rex Ingram (New York: Alfred A. Knopf, 1939). Image courtesy of the Harry Ransom Center, University of Texas. 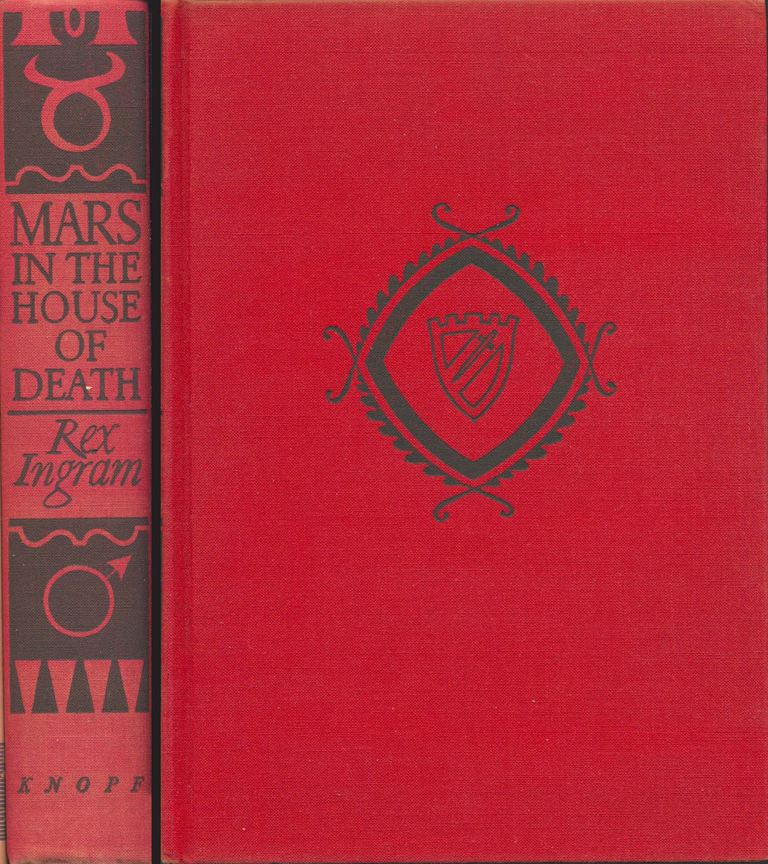 Binding (spine and front) of Mars in the House of Death by Rex Ingram (New York: Alfred A. Knopf, 1939). Design, lettering, and devices by W.A. Dwiggins. Image courtesy of Jeffrey Harding.

Binding
Sometimes, as with Tsushima, Dwiggins copied his jacket spine design for the binding spine of a book, but not with Mars in the House of Death. Instead, the symbols of Mars and Taurus that were on the front of the jacket have been redrawn for the spine of the binding. Dwiggins explained to Jacobs what he wanted to do with the binding: “Mars comes out with me: dead black on the most vivid vermilion we can get, with the top stained to get the Chinese duplex of vermilion and rose”. [5] He eschewed gold stamping, a surprise given his oft-stated preference for it over ink stamping on bindings—but inconsistency was a Dwiggins hallmark. Several years later he remarked to Jacobs that the binding, especially the spine, was the “right way to design for ink.” [6]

Unfortunately, Dwiggins did not explain the device on the binding front. It appears to be heraldic, but does not even remotely match any Spanish examples. The frame around the crenellated shield is especially peculiar. The whole thing seems entirely made up, which is surprising since Dwiggins had some familiarity with heraldry. On several occasions D.B. Updike of The Merrymount Press had hired him to draw coats-of-arms for his clients. [7] 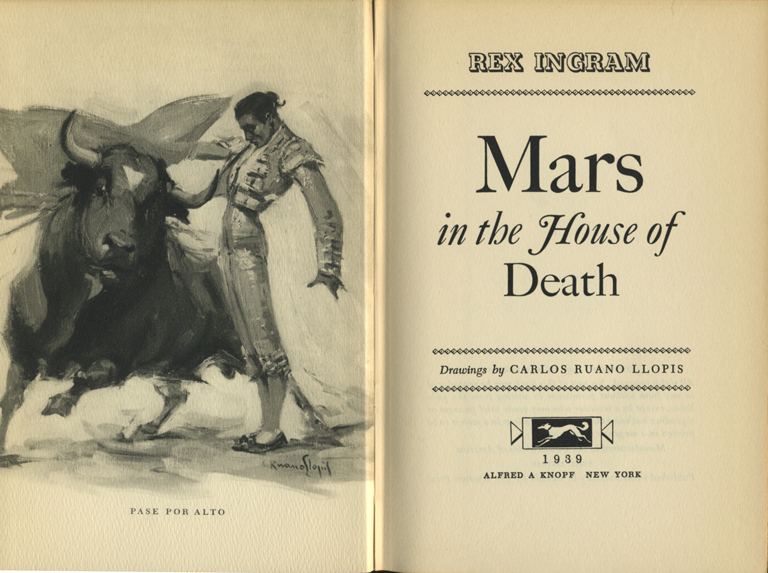 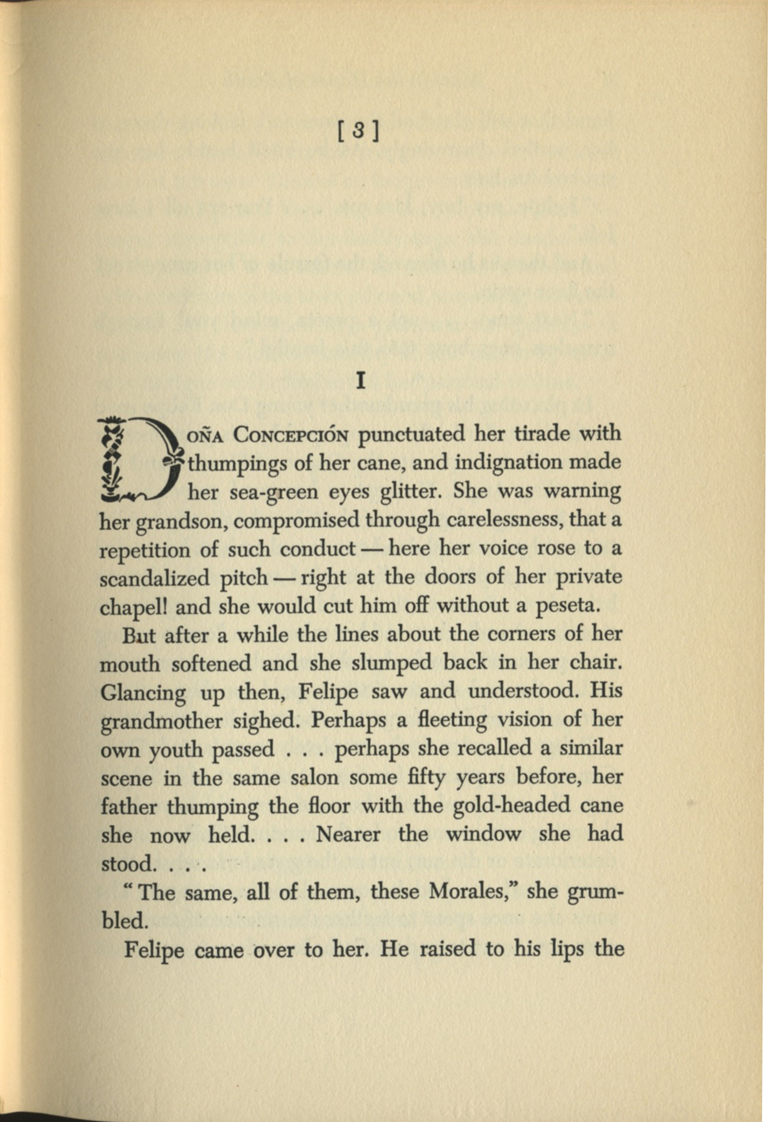 Opening of Chapter I of Mars in the House of Death by Rex Ingram (New York: Alfred A. Knopf, 1939). Typography by W.A. Dwiggins. Image courtesy of Jeffrey Harding. 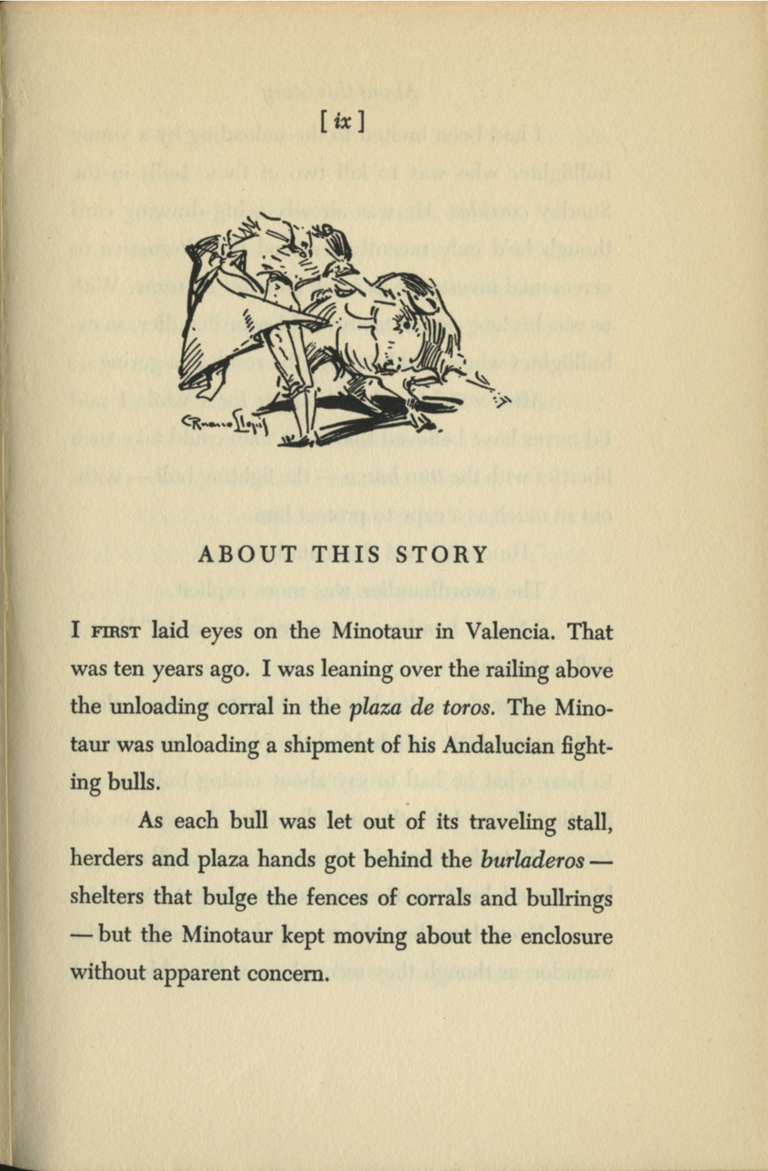 Interior
Dwiggins set Mars in the House of Death in his own Caledonia typeface which was ready for use by April 1939. [8] He supplemented it with his own 48 pt Plimpton Initials for the opening of each chapter. But for the title page Dwiggins used Caslon 471 roman and italic for the title and Beton Open caps for the author’s name. [9] The combination is odd, especially for a novel. Some mediation between the two typefaces is achieved by a “rule” set in Caravan matrix slide 1285 units designed by Dwiggins. (At the time that Mars in the House of Death was in preparation the Caravan ornaments—known by the working title of “Chinese Spinach”—had not yet been released.) [10] A final echo of Beton Open is provided by the Knopf borzoi placed with an open tabella ansata.

Illustrations
The title page is part of a double page design with the frontispiece illustrated by Carlos Ruano Llopis (1878–1950). The tonal illustration of a bullfighter executing a pase por alto (high pass) over a bull is nicely balanced by the title in Caslon. Llopis also executed twenty-three line illustrations for the text.