Voyages to Vinland: The First American Saga translated by Einar Haugen (New York: Alfred A. Knopf, 1942) includes translations of material from Hauk’s Book, the Flatey Book, and AM. 557 (a manuscript in the Arnamagnean Library in Copenhagen) that concern the Viking voyages to the eastern seaboard of the North American continent in the 11th century. [1] The book was designed by W.A. Dwiggins. It is not among his most famous works in the field, though its jacket is included in Bruce Kennett’s biography of Dwiggins. [2] 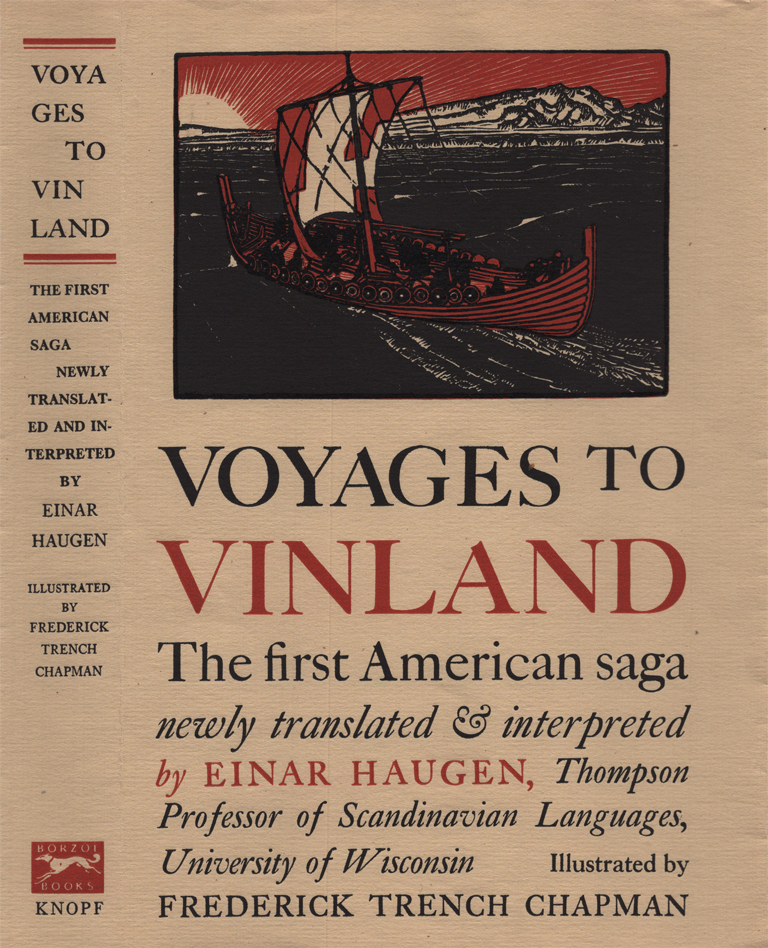 Jacket
The jacket of Voyages to Vinland is part of a series of jackets that Dwiggins designed in the early 1940s based on the notion of jackets as “playbills”. In anticipation of wartime restrictions on materials he urged Knopf to rethink the design and manufacturing of jackets and bindings. [3] Regarding the former he wrote three notes in August and September 1941 to Sidney R. Jacobs (1909–2000), Knopf’s production manager, explaining his thinking:

Design the side in all cases as a plackard [sic] a hand-bill… no airbrush no trick lettering just honest-to-goodness hand-bill (in the best manner)[.] Print in black, or red and black, always, no other inks. No pictures ETC ETC[.]” [4]

…a preliminary and experimental attempt along PLAYBILL lines. The essence of that project would be to establish a HOUSE STYLE that would run through (at least) one season’s work. As I plug at it the PLAYBILL thing is typographic—and a typographic that takes its hunch from French Revolution times, but translates the hunch into present day terms. It turns its back absolutely on the nazi “new order” stuff that is the fashion—no air brush, no “montage” no surrealism. It is reactionary in toto. Types with the help of purely typographic ornaments and pictures. Dynamic but simple in the old fashioned way. 1800…. While “old-fashioned” in its derivation I do not think it would strike the “recipient” as oldfashioned [sic] under my manipulation. [5]

Get absolutely away from tricky “clever” lettering. Use simple letter-shapes. Avoid anything candy-boxy or adv.-agenty. For the preliminary rally (to establish the “house style”) use type. [6]

Above all, Dwiggins wanted “controlled simplicity”. Most of the jackets he designed during the war years adhered to this goal. They were purely typographic—all set in Caslon 471, a longtime Dwiggins favorite—and printed only in black. The two-color, illustrated jacket for Voyages to Vinland was an exception. 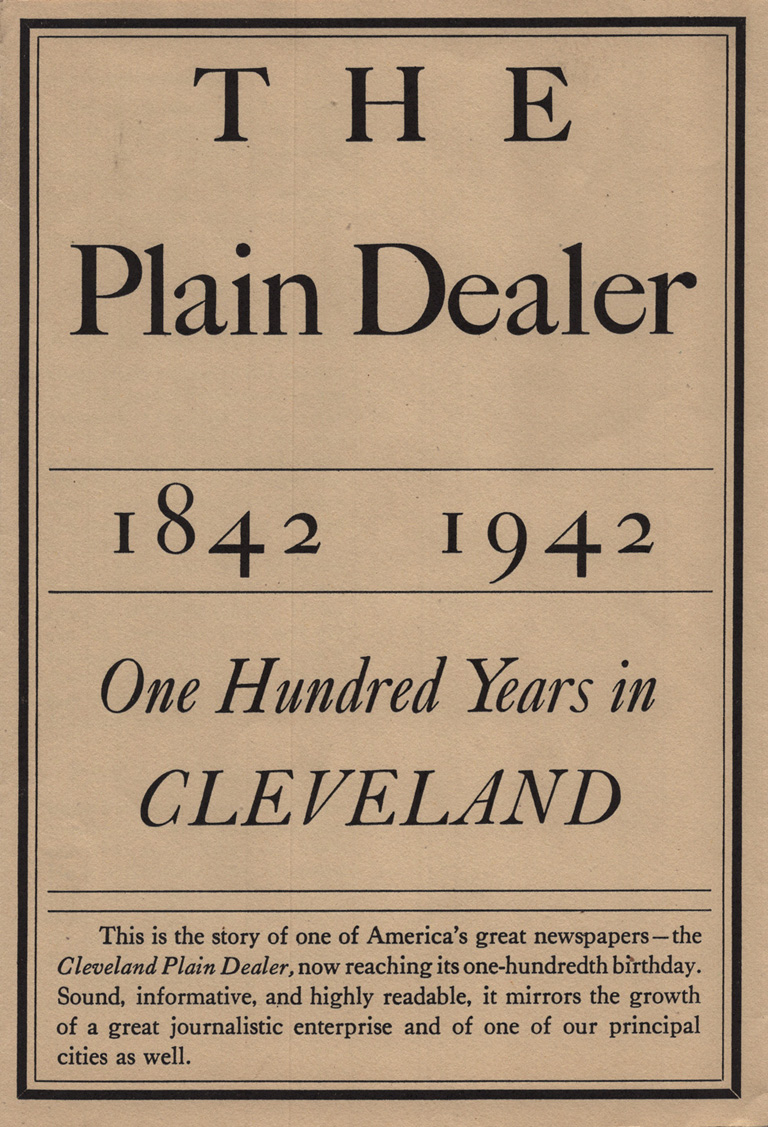 Jacket in “playbill” style for The Plain Dealer: One Hundred Years in Cleveland by Archer H. Shaw (New York: Alfred A. Knopf, 1942). Design by W.A. Dwiggins. 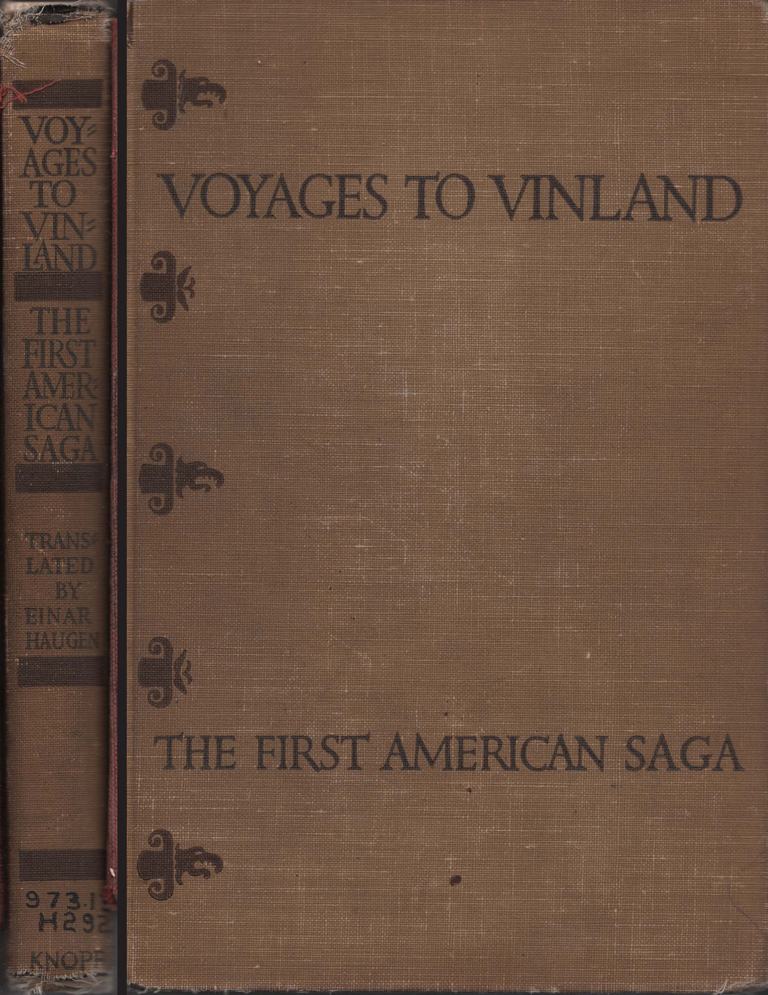 Binding
Despite having designed a number of startlingly inventive and memorable jackets for Knopf in the late 1930s, Dwiggins had begged off of that aspect of book design by 1939. He disliked jackets because they were a sales tool, preferring to devote his energies to designing bindings which he viewed as an intrinsic part of a book. However, he constantly complained about the appearance of bindings with designs stamped in ink, considering it a difficult problem to solve. In 1938 he wrote at length to Jacobs on the subject:

The whole matter of these late covers stamped in ink is most unsatisfactory. If you use cloth-colors dark enough to look rich, and to conceal dirt marks, the ink titles, etc., fade away and can’t be read. The only possible ink is black, and even black doesn’t show up unless the cloth is pretty light in value. I don’t like the pale, “orchid” cloths, and I certainly don’t like the effect of ink-stamping on either hard or nat. cloth—it is either sticky, or else thin and sloppy. Light colored inks on dark cloths look like the devil, don’t you think?—cheap school books… I am quite up in the air on the matter, and quite uninspired. I can design decently for metal on dark cloth, but all the ink stuff leaves me out in the cold, without ideas, or any desire to work in the material! [7]

The binding for Voyages to Vinland is one that he felt succeeded. The design, stamped in brown and black ink, simulates a leather binding with metal clasps. While working on it, Dwiggins remarked to Jacobs that, “The picture comes to me in terms of sun-burned sail-cloth and faded tar-stains.” [9] The Voyages to Vinland binding is cloth. Dwiggins had sternly warned Jacobs, “No more school-book pyrox.!” [10] All of the text on the binding is handlettered by Dwiggins. 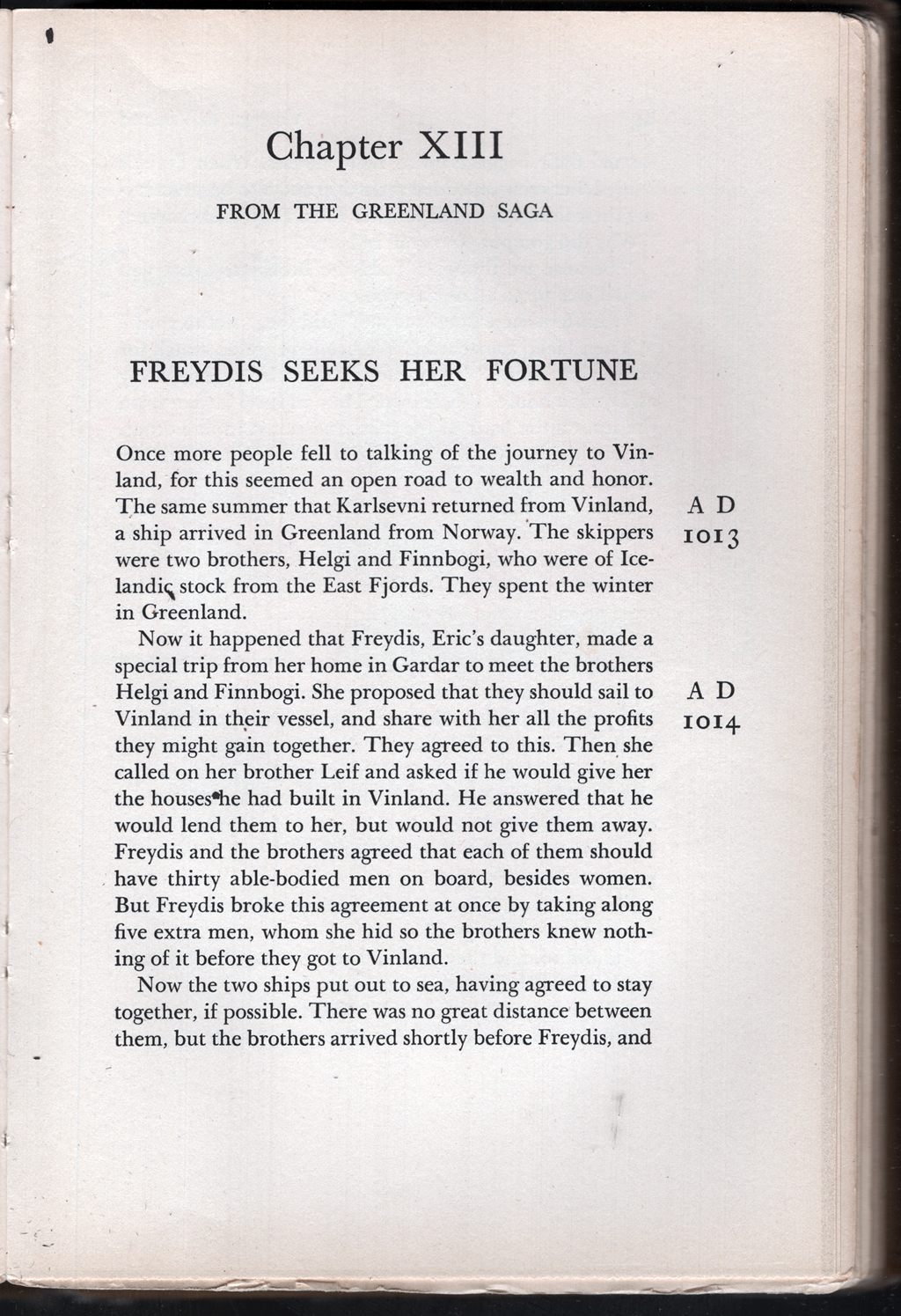 Interior
The title page of Voyages to Vinland is a masterful handling of a lengthy text. Note the use of diminuendo, the variations in letterspacing, the subtle use of a smaller capital T in the third line, and the deliberate avoidance of justification in lines 6 and 7. Compare it to the way Dwiggins dealt with the same information on the jacket (above). On the jacket he used Caslon 471 roman and italic, but on the title page he shifted to ATF Bulmer, another of his favorite typefaces. His decision not to carry over Caslon 471 from the jacket was not unusual as Dwiggins rarely seemed interested in maintaining consistency among the different parts of a book. The Knopf borzoi is set within a medieval architectural frame flanked by two knights. This device was originally designed by Dwiggins for Kristin Lavransdatter by Sigrid Undset (New York: Alfred A. Knopf, 1935).

As much as Dwiggins liked Bulmer, he never used it for the text of a Knopf book. That was partly because it was only available for text composition from Monotype and Dwiggins, as much as possible, preferred to specify linotype faces. His usual go-to choice as a companion to Bulmer was Linotype Baskerville and that is what he used for Voyages to Vinland. For the contents page and the running heads Dwiggins used his own Electra Cursive. The marginal dates are set in a Caslon that I have not been able to definitively identify. This seemingly odd mix of types was quite commonplace for Knopf books designed by Dwiggins. [11]

Illustrations
Voyages to Vinland is lavishly illustrated with twenty vigorous two-color woodcuts by Frederick Trench Chapman (1887–1983). This is very unusual for a Knopf book, especially one published during wartime. The explanation is that Knopf acquired the book from Holiday Press who had published it—with the woodcuts—in a limited edition the year before. [12] “This settling of where such pictures are to come is more an editorial function than a matter of design,” Dwiggins wrote to Meyer Miller, assistant to Jacobs, on July 9, 1942. “For myself I wouldn’t be worried if a few of the plates wander from their positions close to the text.” He was more concerned with backing up all of the illustrations with blank pages so that the type didn’t “punch through” and interfere with them. [13]

Workload and remuneration
Dwiggins worked on Voyages to Vinland from late February to early September of 1942. It was one of sixteen books for Knopf he was juggling during those seven months. [14] Knopf paid him $25 for purely typographic jackets, $75 for jackets with an illustrative element, and $100 for fully designed and lettered jackets; $25 or $80 for the bindings, depending on whether the designs used old dies or were entirely new; and $40 or $50 for the interior typography. The Plimpton Press paid him an additional $35–$50. For Voyages to Vinland Dwiggins received a total of $115. [15]