The Definitive Dwiggins no. 300—W.A. Dwiggins meets Alfred A. Knopf

Supposedly one of the pivotal moments in the career of W. A. Dwiggins was his meeting with the New York publisher Alfred A. Knopf in 1923. I say “supposedly” because I don’t think the meeting had a monumental impact on either Dwiggins’ career or the development of Knopf’s books as has been widely proclaimed. The circumstances of the meeting itself are murky as three different people have been put forth as the interlocutor between Dwiggins and Knopf.

C. Chester Lane or Frederic G. Melcher?
Alfred A. Knopf, in “Tribute to a Designer, Dwiggins,” an insert in the Christmas Rondelet issue of Esquire magazine for December 1959, gave two different accounts of his initial meeting with Dwiggins. At first he quoted Dwiggins himself as saying, “Chester Lane (N.Y.) arranged for me to meet a number of NY publishers (yourself, one) and from that came most of the work since in typog. design (1930?). ” [1] Knopf then went on to say that there was no correspondence between himself and dwiggins prior to 1927, but that he had discovered an entry in his private diaries for September 17, 1923 that read, “W.A. Dwiggins brought to office by Fred Melcher.” [2] He made no attempt to reconcile these two accounts.

The actual diary entry itself is a bit peculiar as it comes after an entry for September 18, 1923. The handwriting is the same, but I can’t help wondering if Knopf added it years later. [3] The actual entry differs from Knopf’s published version, though the gist remains the same. 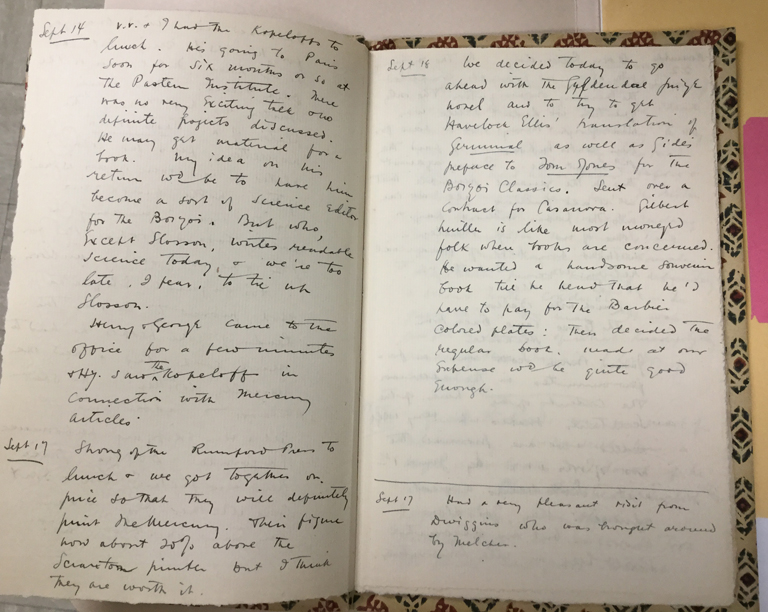 Joseph Blumenthal, in his survey of the history of American printing, wrote that Frederic G. Melcher (1879–1963), the editor of Publishers’ Weekly, was the one who brought Knopf and Dwiggins together. [4] How Melcher could have ended up squiring Dwiggins to the Knopf offices is unclear, though I will propose a theory later. There is no evidence that the two men had met or corresponded prior to this and none that they did so afterwards. There is not even any evidence that Melcher had read Extracts from an Investigation into the Physical Properties of Books as They Are at Present Published, Dwiggins’ “expose” of contemporary book publishing practice. [5]

In 1964 Knopf delivered a lecture on his publishing career in the Richard Rogers Bowker Memorial Lecture series. According to the account of it in Publishers’ Weekly, he claimed that Melcher and Elmer Adler (1884–1962), partner in Pynson Printers, together introduced Dwiggins to him. [6] That same year bookseller Philip C. Duschnes propounded the notion that Adler alone had introduced Dwiggins to Knopf. [7] Both Knopf and Duschnes may have been using the term “introduced” loosely to refer to the role that Adler played in My Mortal Enemy by Willa Cather (1926), the first book that Dwiggins designed for Knopf.

Both James Wells and John Tebbel assert that it was Chester Lane (1883–1967) who provided Dwiggins with an introduction to New York City publishers, including Knopf. [8] Although not footnoted, their claim presumably rests upon Knopf’s Esquire article and Lane’s remembrances of Dwiggins in Postscripts on Dwiggins (1960). Lane had known Dwiggins since the latter’s arrival in Hingham in 1904. [9] He commissioned work from Dwiggins while at Ginn and Company from 1904 to 1908 and then continued to do so as the Publishing Agent of Harvard University and, later, the Director of the Harvard University Press from 1908 to 1919. Lane resigned from the Harvard University Press in November 1919 and moved to New York where he joined The New York Evening Post as its production manager. In Postscripts Lane wrote about a visit Dwiggins made to his summer home on Ash Island in Maine:

Sitting there watching the waves, early in the 1920’s, we discussed the limitations of the advertising work he was then doing so well and the possibility of reaching a more discriminating audience with less ephemeral material. I remember deploring the fact that his talents in some ways were then being very much wasted. The outgrowth of the talk was in September, 1923, a week’s visit to New York where some of the moving spirits in the publishing world were met and given an opportunity to glimpse Will’s genius. We all know the rest. [10]

The Maine vacation occurred between August 10 and 24, 1923. [11] From at least the early 1920s through the early 1930s Dwiggins and his wife Mabel regularly spent one to two weeks with the Lanes at their summer home.

Dwiggins’ week-long visit to New York was undertaken between September 13 and 27, 1923, just several months after he was diagnosed with adult-onset diabetes. [12] He stayed in Montclair, New Jersey at the home of his cousin Laurance B. Siegfried (1892–1978), who had begun working for Mergenthaler Linotype in February 1923. Montclair is only twelve miles from New York and in 1923 travel between the two places was easily done via the Delaware, Lackawanna & Western Railroad. Presumably, Dwiggins commuted into the city each day as he made his rounds among New York publishers.

In his remembrances Lane never stated that he accompanied Dwiggins on any of his visits to the publishers or that he specifically arranged one with Knopf. Given Lane’s duties as business manager of The New York Evening Post, it is likely that Dwiggins, armed with written introductions from him, made the visits on his own. [13] Except for the one with Knopf, where Melcher was his chaperone.

In the 1920s Montclair was also home to Lane, Harry Gage (Siegfried’s boss at Mergenthaler Linotype), and Melcher. [14] I believe that either Lane or Siegfried introduced Dwiggins to Melcher during that week-long sojourn and that Melcher, given his vast connections in the publishing industry, offered to accompany him on his visit to Knopf. This is the best explanation for the seemingly contradictory claims that have been made about how Dwiggins first met Knopf.

Elmer Adler and Pynson Printers
In the end, how Dwiggins met Knopf is not that important. The meeting, contrary to the assertions of Wells and Tebbel, did not result in any immediate work. The first Knopf book that Dwiggins designed was My Mortal Enemy by Willa Cather, but it was commissioned by Adler of Pynson Printers and not by Knopf. [15] In fact, it is Adler who really deserves the credit for “introducing” Dwiggins to Knopf.

Adler co-founded Pynson Printers in New York in 1922. [16] He had become friends with Knopf within a year and in 1923 he designed and produced April Twilights and Other Poems by Willa Cather (1923), the first of many books he undertook for the publisher in the 1920s. That same year he apparently recommended Dwiggins as an advisor to The Plimpton Press in Norwood, Massachusetts. Here is the story, in Knopf’s words:

In 1923 we published Thomas Beer’s classic Stephen Crane. People began to read Crane again, and in 1924, after we had spent some years in acquiring the copyrights, the Plimpton Press manufactured for us a set of his Collected Works in twelve volumes. The edition was limited to seven hundred and fifty copies. The books were were very beautiful and were designed by and under the supervision of Elmer Adler. During one of his visits to Norwood, Elmer writes me: “I was asked if I would accept a retainer to advise Plimpton on their production, and I answered that it would seem better sense for them to retain one of the topmost men in the country—who lived almost next door. They had never heard of W.A. Dwiggins.” [17]

Adler was eager to have Dwiggins design books for Knopf. Dwiggins responded favorably but cautiously to a feeler he made in the summer of 1924:

I quite agree with you that Knopf deserves encouragement for the things he is doing,—and I should quite naturally enjoy working with you on one of his books.

Tell me how the process has been managed with the other people who have made books in the group,—and what amount you set aside to cover the designing end, and I will let you know at once whether or no I can proceed.

I am very favorably inclined, if I can afford it! [18]

Several days later Dwiggins told Adler, “Have Mr. Knopf send me his MS. and set the price he wants to pay for the lay-out and design and I shall go forward with it on that basis, and keep my end within the appropriation. It will be a pleasure to help him make one of his books.” [19] But nothing came of this initiative. It was not until late July 1925 that Adler and Dwiggins began work on My Mortal Enemy for Knopf which was published in 1926. [20] But even after the limited trade editions of My Mortal Enemy were completed, Knopf did not hire Dwiggins regularly to design entire books until 1933. The commonly held notion that Dwiggins’ career as a book designer for Knopf began in 1926 is only superficially true. [21]