The Swiss Grid exhibition at Poster House: A virtual tour 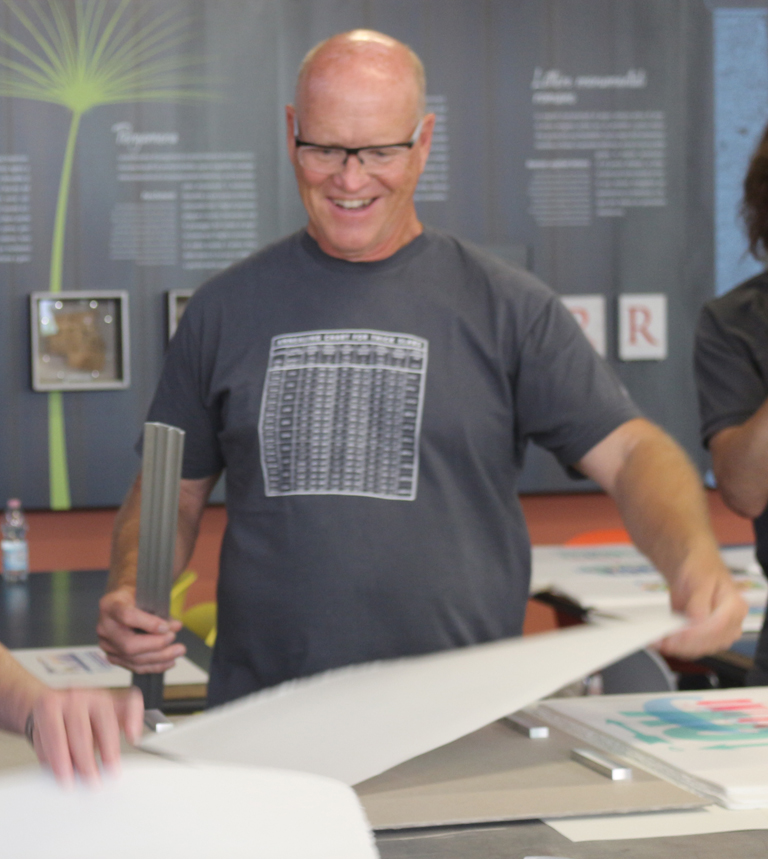 It is with sadness that I write this post about Ray Tomasso, letterpress printer and paper sculptor, who died on June 25 of this year. Ray and his wife Diane were both part of Legacy of Letters 2015 and Legacy of Letters 2017, Ray as a participant and Diane as an observer, documentarian, and occasional assistant.

My memories of Ray from those two workshops at the Tipoteca, the first with Alan Kitching as master printer and the second with Erik Spiekermann as the master printer, are of a cheerful, outgoing man who was eager to help others with advice and physical assistance. In 2015, Ray and John Risseuw were the first printers to use the Tipoteca’s two handpresses. And Ray made sure to use one of them again in 2017. It was the handpress that he helped others with, whether showing them how to position the frisket or helping them in pulling the lever. I especially remember the goofing around that he and Raffaela Canu did as she printed her sheets.

While Ray worked on his projects at the Tipoteca he exuded a sense of enjoyment in what he was doing, even when he was stumped by some makeready. I always visualize him grinning—even though many of the photographs I have included here show otherwise. Sometimes his expression was serious or preoccupied, but never angry, frustrated, or dejected.

Ray exuded the same enthusiasm when I had the good fortune to visit him and Diane one evening during TypeCon 2015 in Denver at their home in nearby Englewood, Colorado. He was eager to show me not only his paper sculptures, but his type collection, his various tools and equipment, and all sorts of stuff. Ray really seemed to like things and working with his hands. I vividly recall the displays of drafting tools on one wall of his garage studio, primitive carvings on another, and signs scattered about (e.g. “Caution: Keep Aisles Clear” or “Fireworks Cancelled per Arapahoe County Sheriff”).

Although I did not know Ray a long time, I will miss him greatly. He will remain forever in my mind with a grin of contentment on his face. 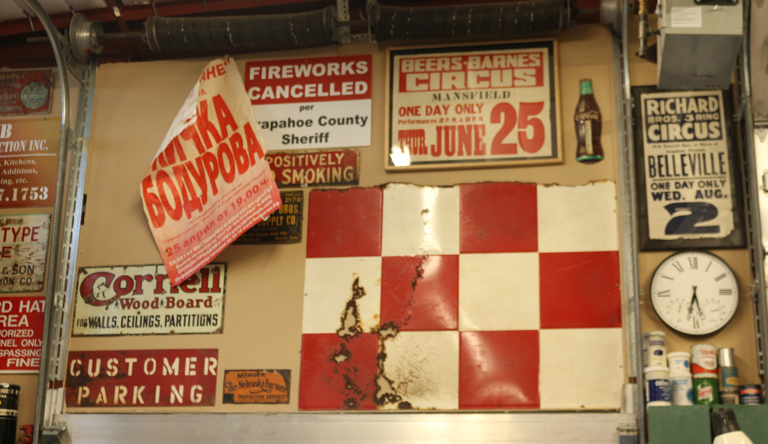 Some of the signs in Ray’s workshop. Photographed in 2015.

Here are some other remembrances of Ray by Legacy of Letters printers and participants.

Pam Galvani (Legacy of Letters 2015)—”I really appreciated the amazing passion Ray had for his art. Being a fellow traveller with him on our Italian trip was a pleasure. I was so impressed by Ray’s enthusiasm and curiosity and passion for all things along the way on that trip.”

Alexander Trubin (Legacy of Letters 2015)—”I’m glad I met Ray on our tour in Italy. And although we had a chance to work together only for a week, he will stay in my memory as a great artist and a man of light. A humble, generous, attentive and thoughtful person who was always ready to help. A man of such caliber, he saw you as an equal without any sign of condescension or arrogance.”

Liz DeLuna (legacy of Letters 2015)—”My fondest memory of Ray is when he taught me to use the Washington press. Everyone was queuing up for the Vandercooks, and he and John quietly moved into the other room and took over the Washington presses. After a bit I followed and they showed me how to use them. It was awesome. I felt like part of the secret club.”

Jessica Spring (Legacy of Letters 2017)—”I remember Ray’s complete joy and enthusiasm for the handpress which was so infectious.”

Jeryl Jones (Legacy of Letters 2017)—”Steve and I had the pleasure of meeting Ray and Diane for the first time in Italy joining the Legacy of Letters tour in 2017. During our workshop at Tipoteca, Ray was first to finish his collaborative piece (he and Jessica Spring found the largest type!) and stole off to the hand press in another room to set and proof some of the fantastic type specimens. After showing me how to use the press, he went off to find more type. We have met again several times since, on trips to Denver, where he and Diane were kindly hospitable to us. He enjoyed showing us around his shops and revealing the latest acquisition(s). Ray was an all around great guy and glad we had the chance to spend time with him and Diane.”

Sibylle Schneider (Legacy of Letters 2017)—”Thank goodness, we had the opportunity to share such a wonderful experience with Ray. I am sure he has taken a lot of those in his heart with him.”

Alan Kitching (Legacy of Letters 2015)—”I remember Ray as an expert printer on the Columbian press at Tipoteca when we did the workshop in that wonderful place.”

Erik Spiekermann (Legacy of Letters 2017)—”I bumped into Ray and Diane last year in Oxford at the post-war printing conference. They were both cheerful as ever. Ray reminded me of the fact why I liked the USA when I first visited over 30 years ago. Honest, friendly, unassuming, outgoing: that’s how most people appeared to me then, and that was my first impression of Ray. He was also well-travelled and educated—an intellectual who had found his grounding in making something as basic—and important!—as paper his thing. Now that half the country seems to be getting dumber by the day, people like Ray will be missed even more. I certainly had been looking forward to spending more time with him and Diane, to learn, to laugh, to work together. We’ll all miss him badly.”

Stephanie Carpenter—”Ray was such a sweet and talented guy. He had joined us at Hamilton Wood Type Museum for many of the ‘hangs’ this year.” 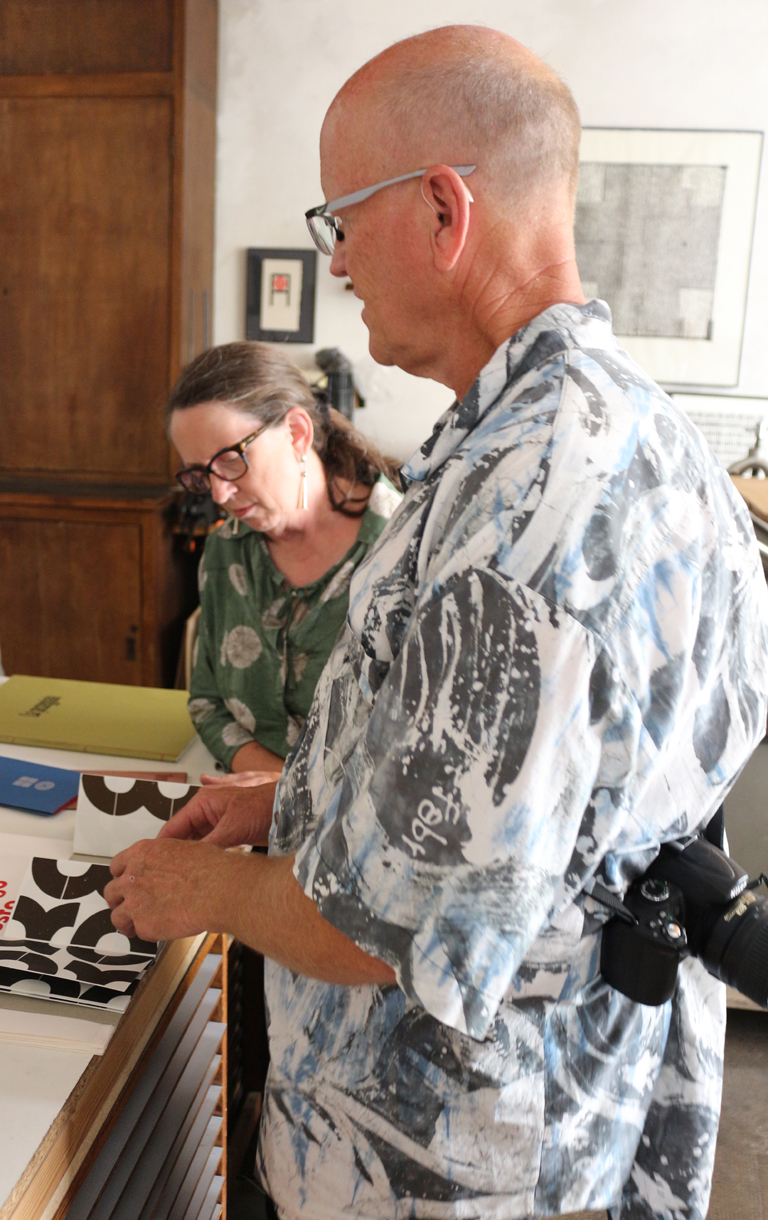 Ray and Diane at Il Buon Tempo in Milano looking at the work of Lucio Passerini. Legacy of Letters tour (27 June 2015). 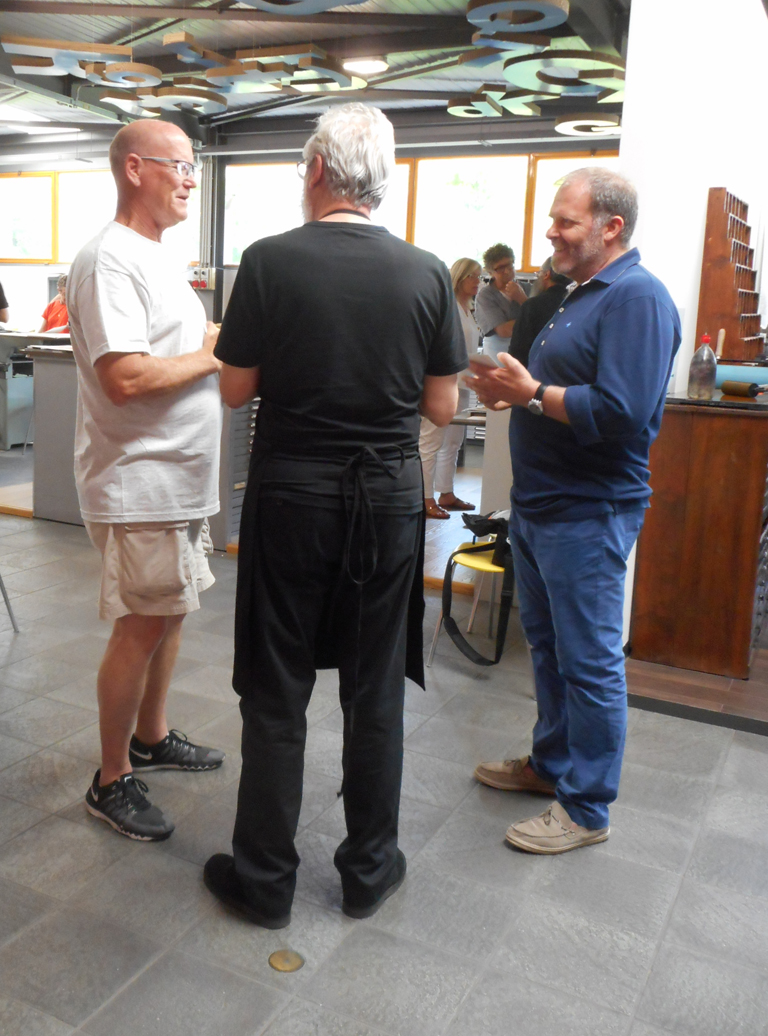 Ray talking to Alan Kitching and Sandro Berra during the Legacy of Letters 2015 workshop. Photograph by Diane Tomasso. 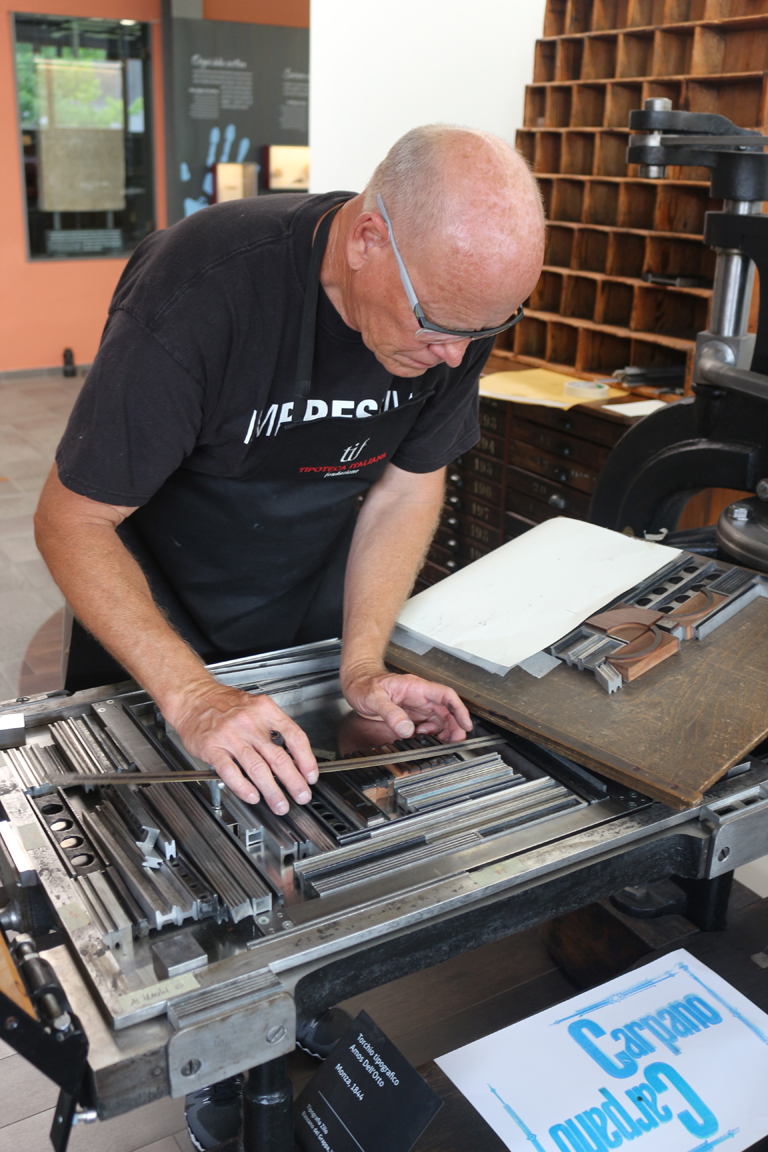 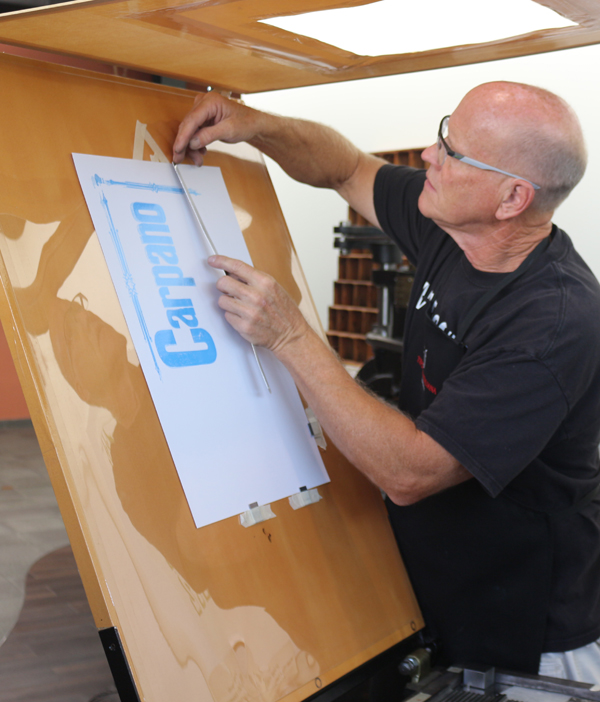 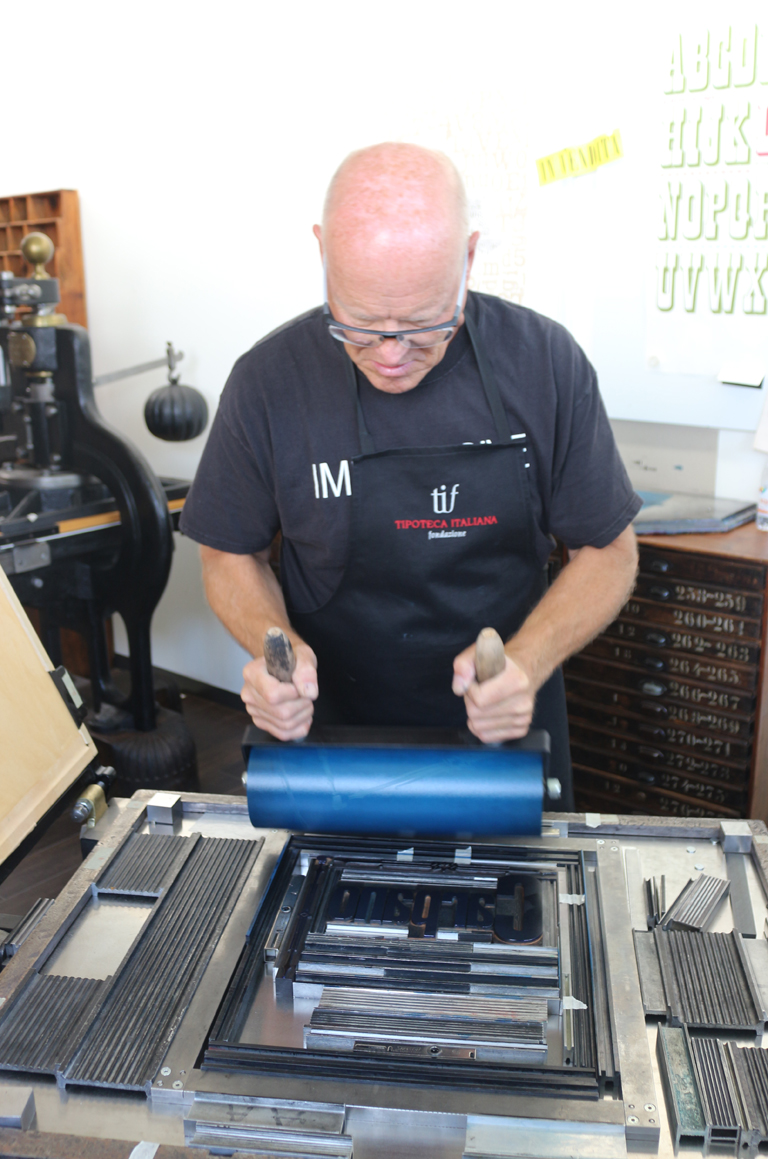 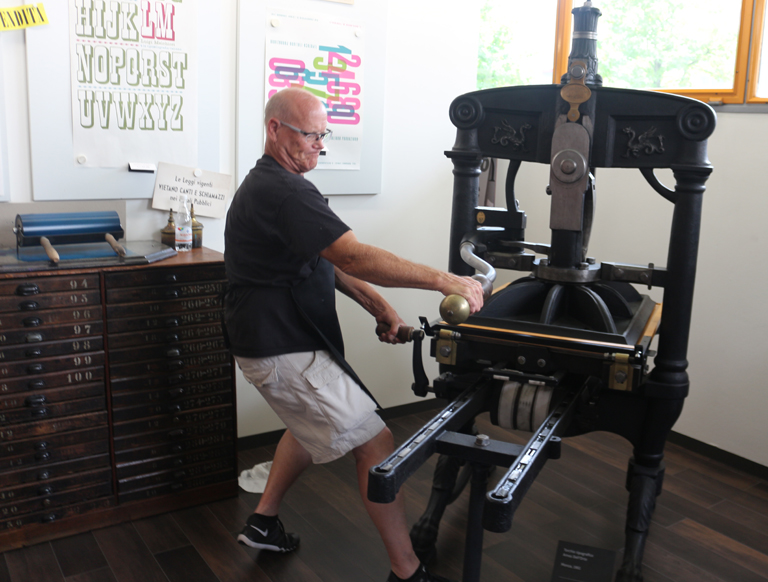 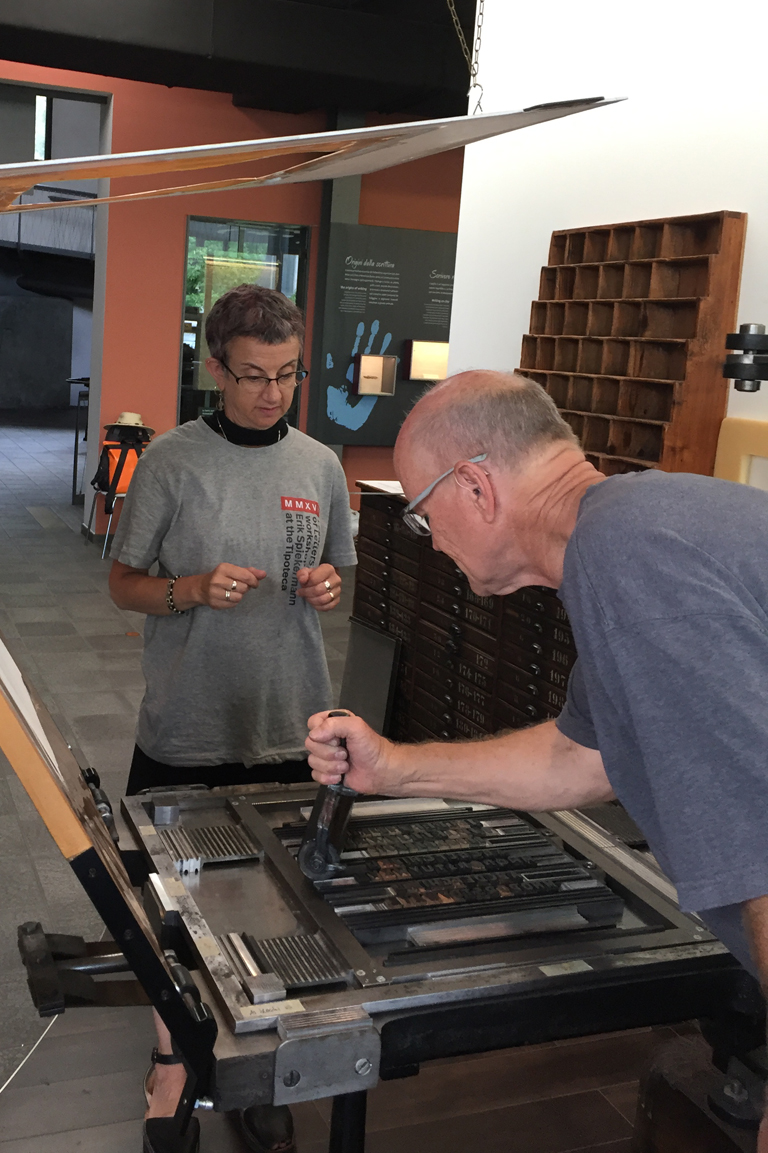 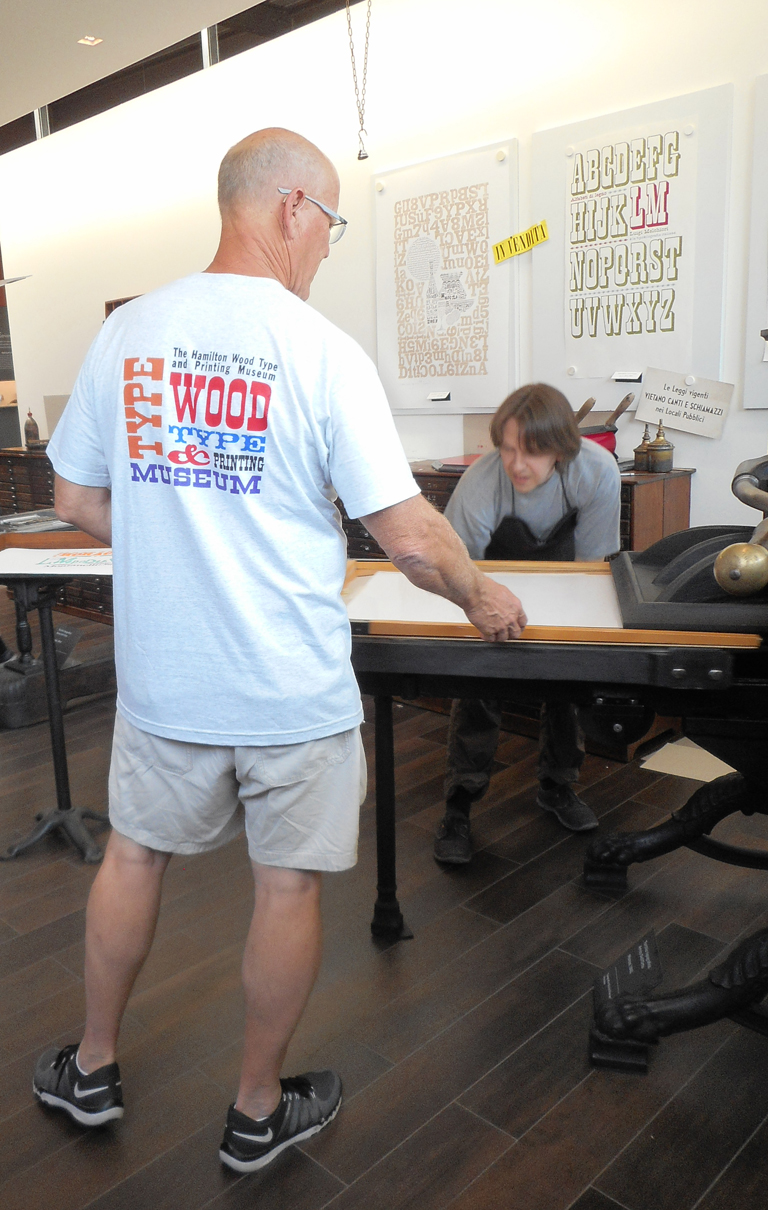 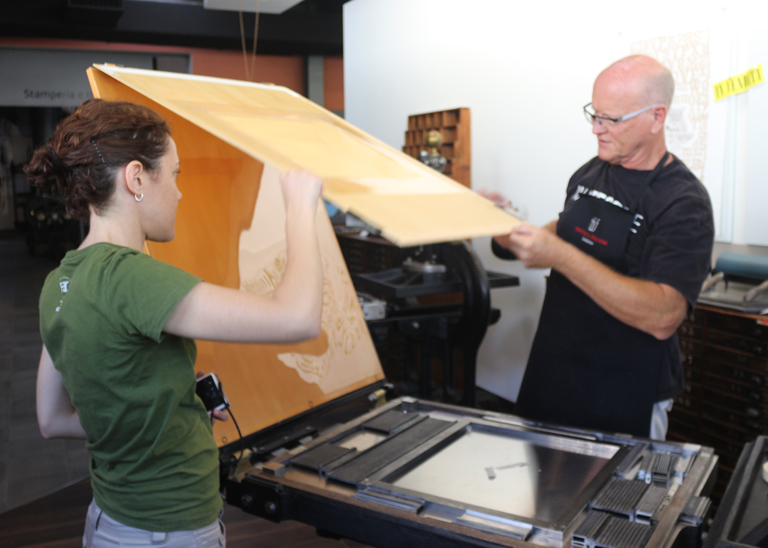 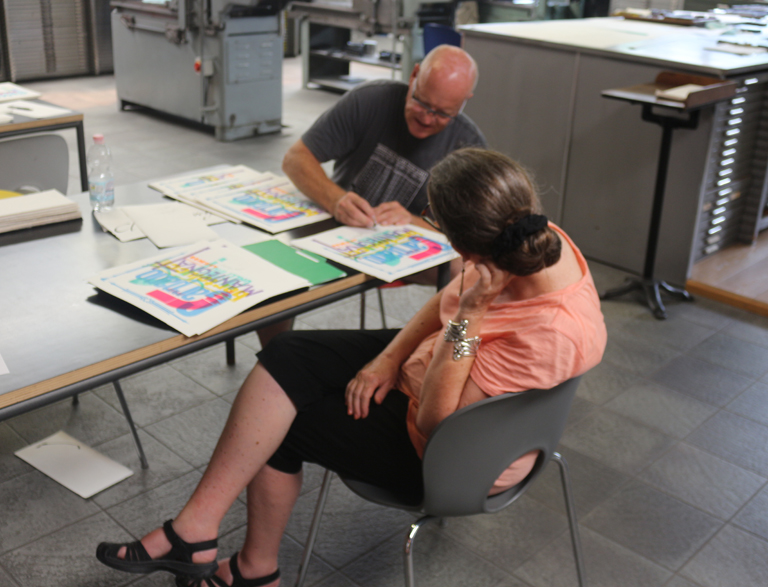 Ray signing his prints as Diane looks on. Legacy of Letters workshop with Alan Kitching (6 July 2015). 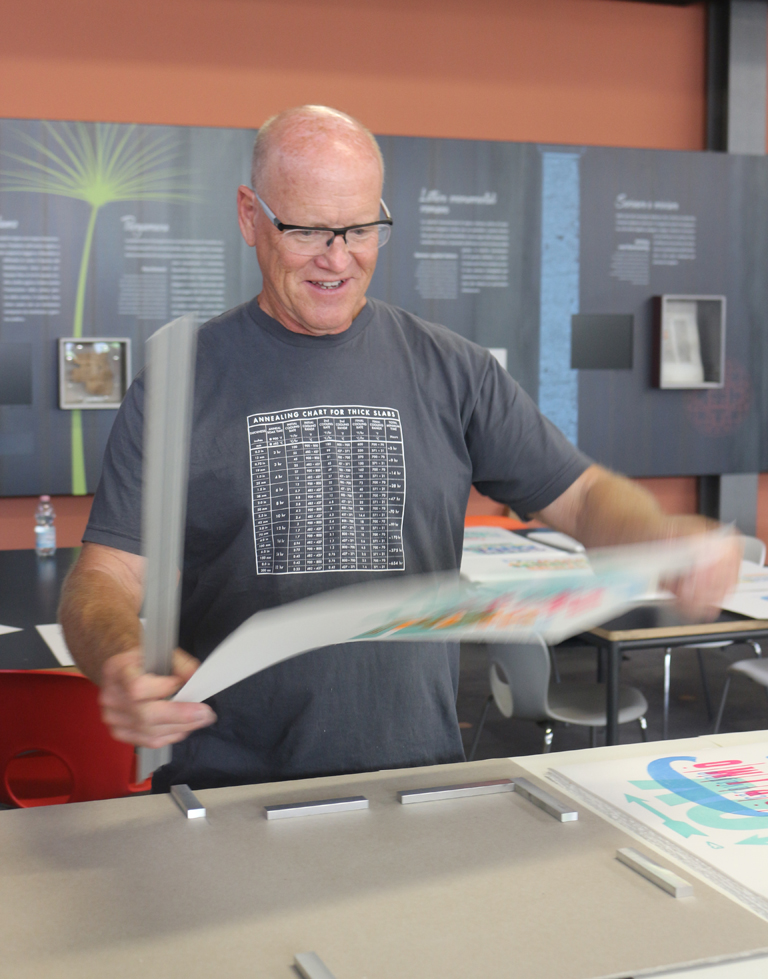 Ray looking at his print. Legacy of Letters workshop with Alan Kitching (6 July 2015). 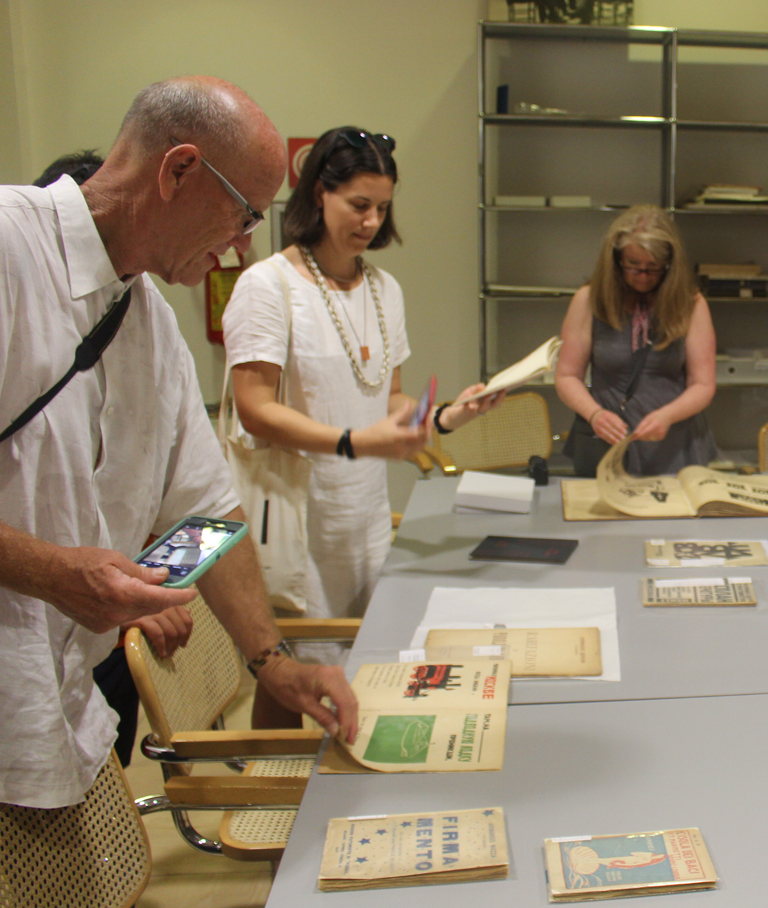 Ray at the Archivio di MART in Rovereto with Alta Price and Jeryl Jones. Legacy of Letters tour (5 July 2017). 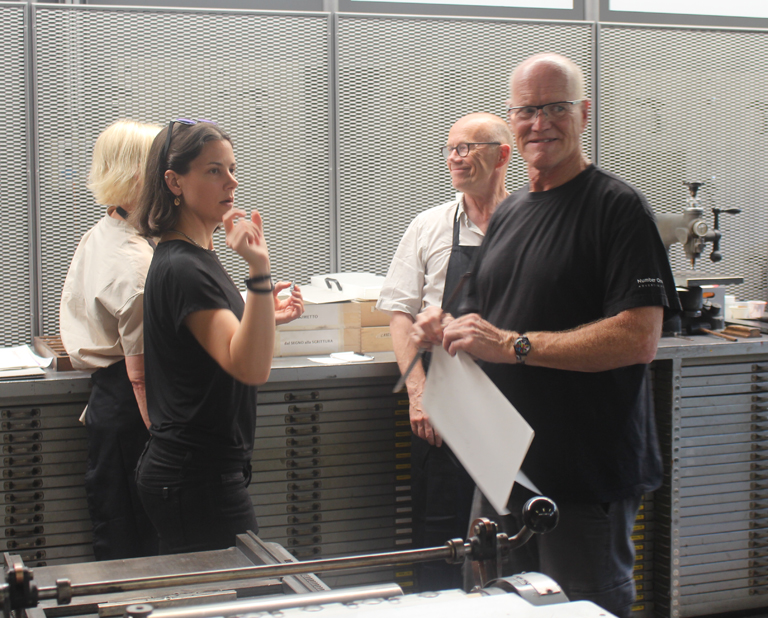 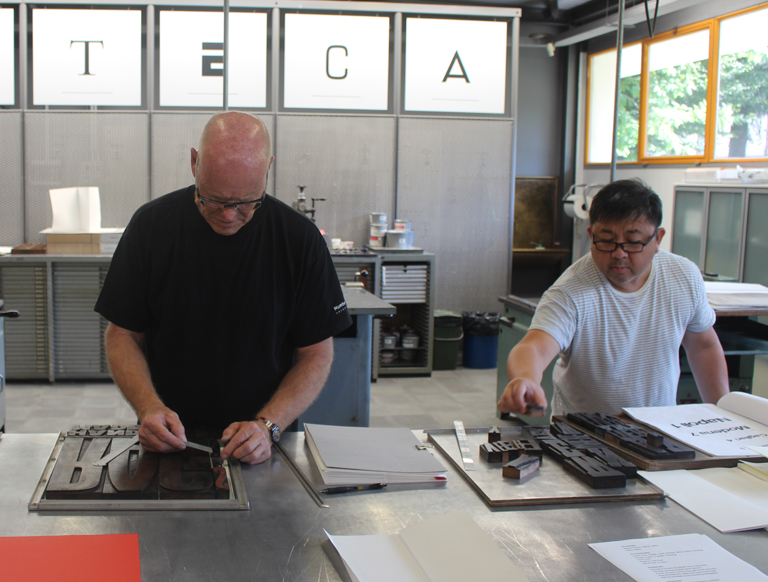 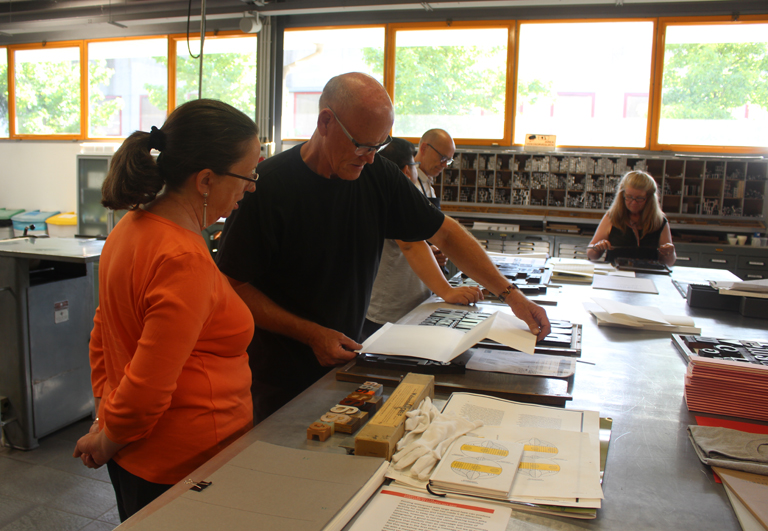 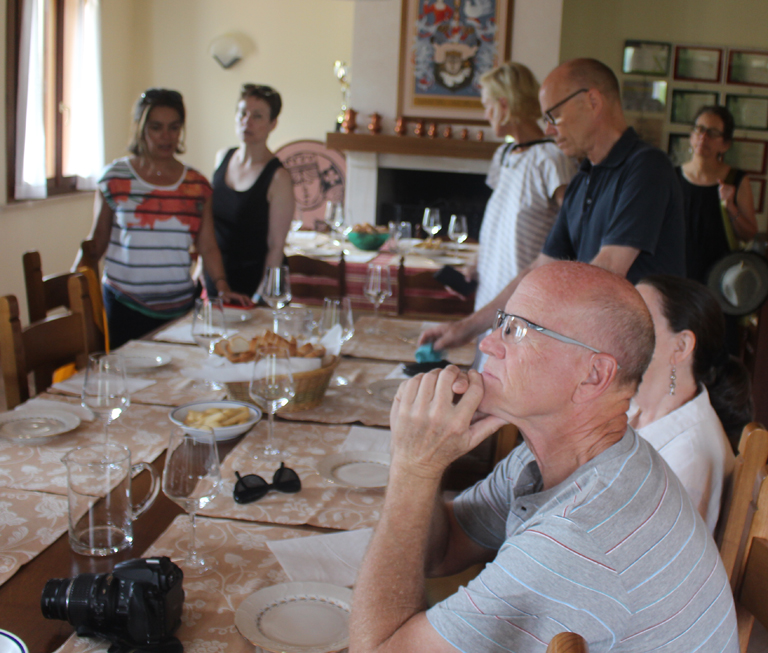 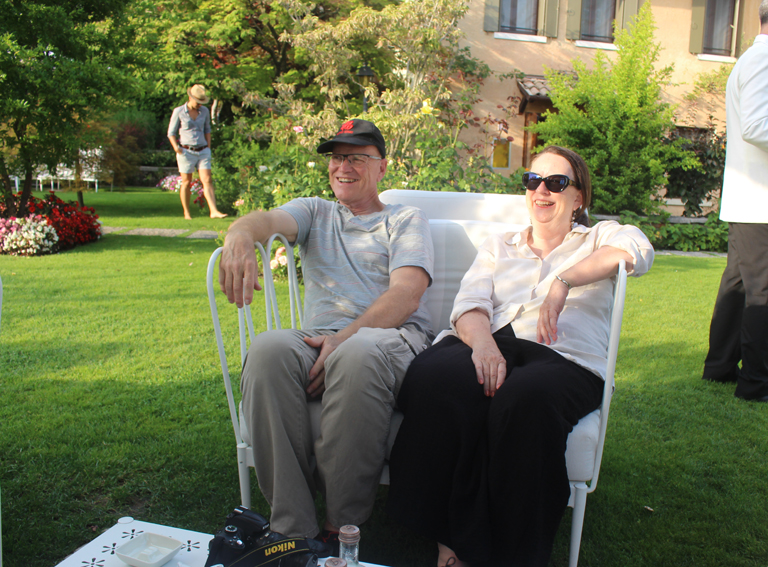 Ray and Diane relaxing in the garden at Hotel Cipriani in Asolo. Legacy of Letters Veneto tour (9 July 2017). 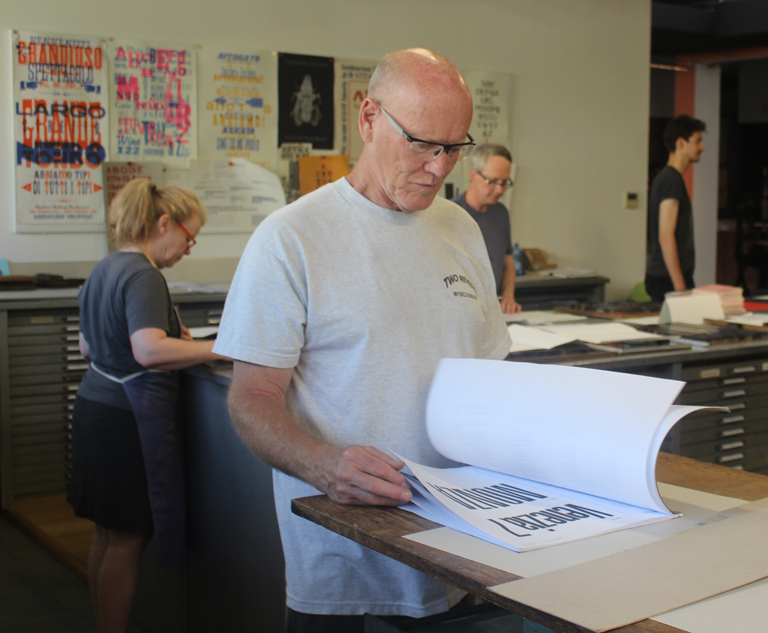 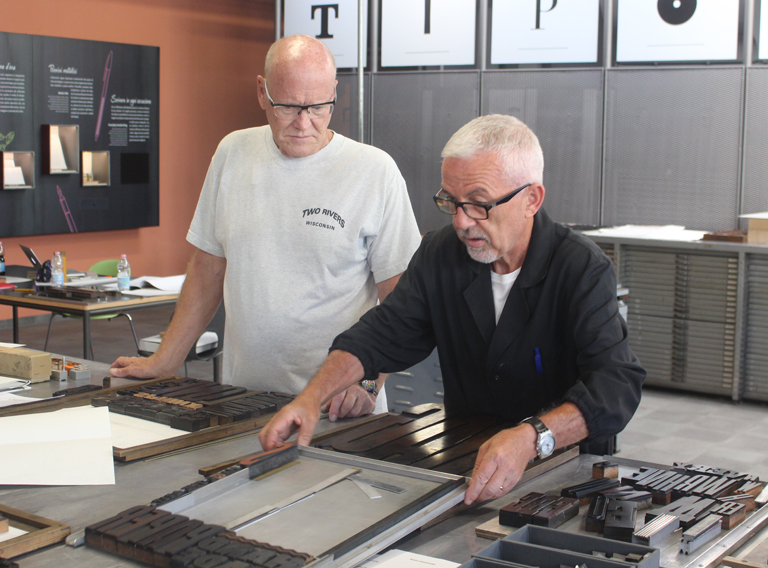 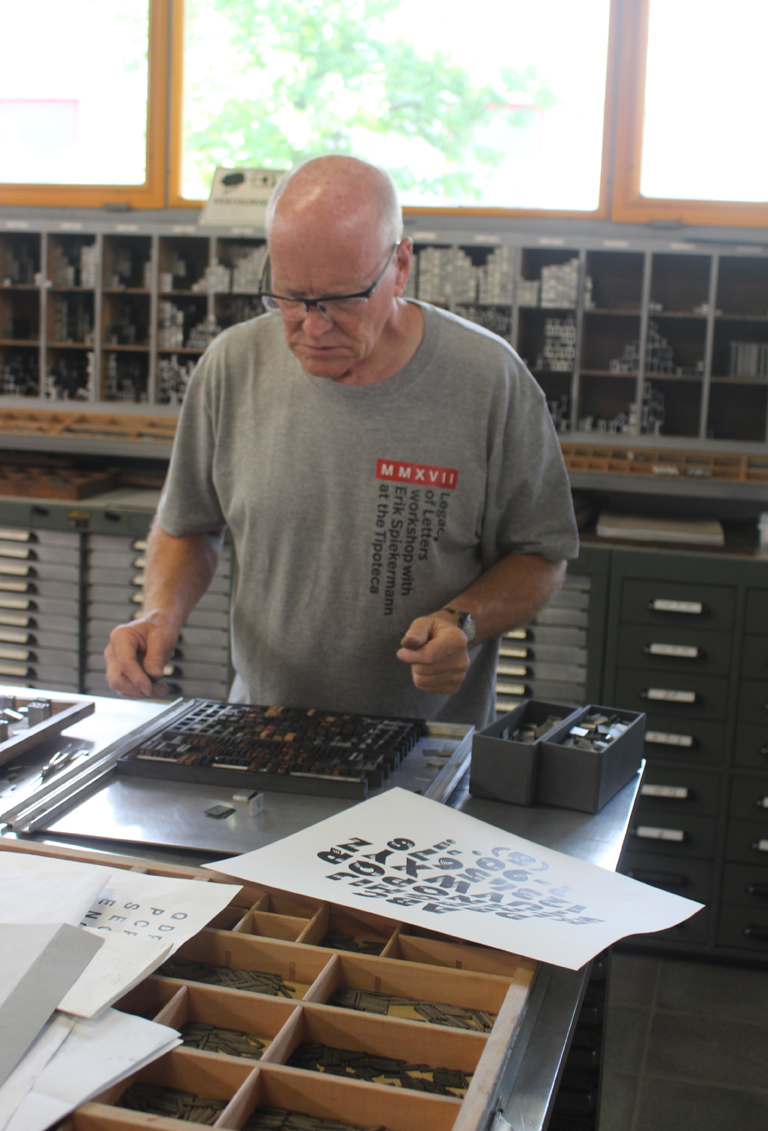 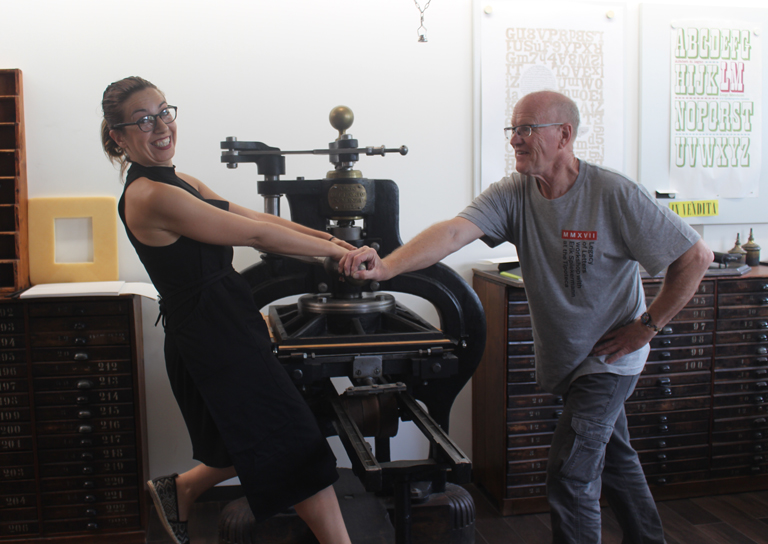 Ray and Raffaela Canu dancing with the press. Legacy of Letters workshop with Erik Spiekermann (12 July 2017). 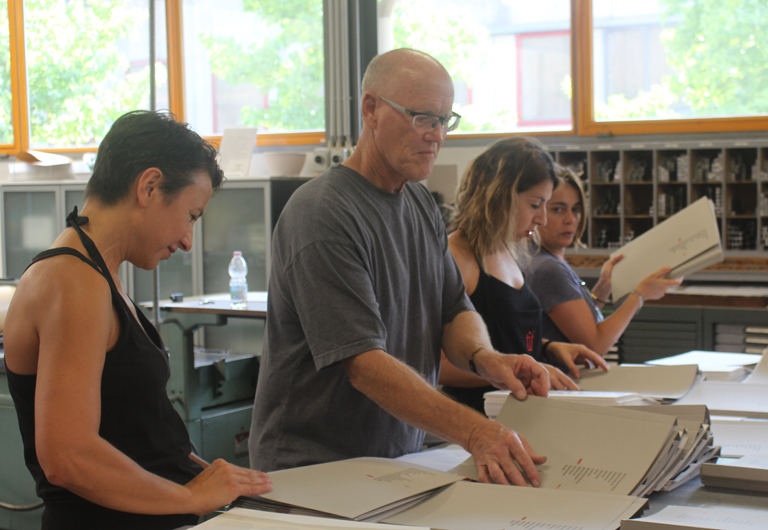 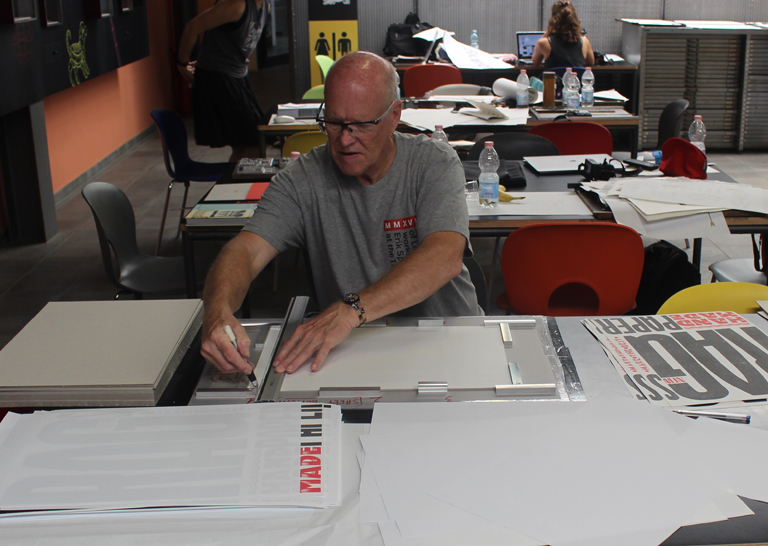 Ray trimming the boards for the book. Legacy of Letters workshop with Erik Spiekermann (13 July 2017). 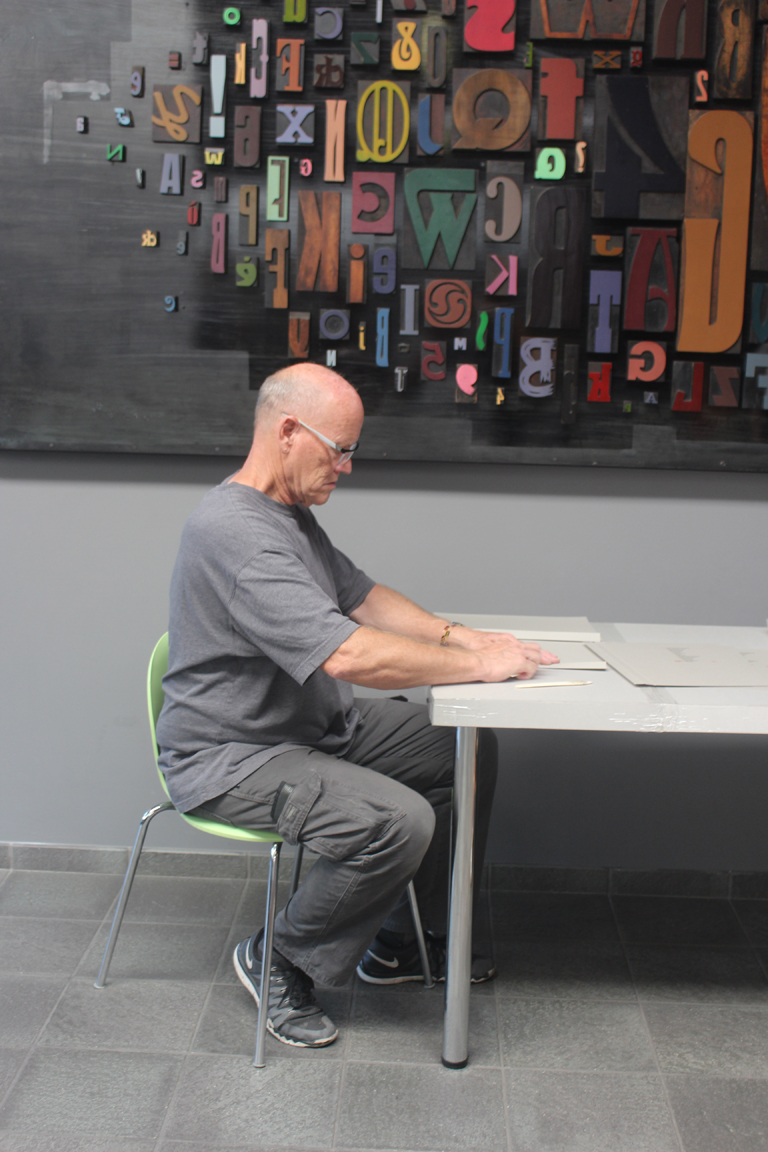 Ray scoring the boards for the book. Legacy of Letters workshop with Erik Spiekermann (13 July 2017).

For more about Ray’s life and work see “Remembering Artist Ray Tomasso, Who Died at 70” by Michael Paglia in Westword (June 29, 2020).