The Definitive Dwiggins no. 210 addendum no. 1—A mark for The Printing House of William Edwin Rudge

The Definitive Dwiggins no. 211—A Book of American Trade-Marks & Devices

In The Definitive Dwiggins no. 209, I quoted Edmund G. Gress, the editor of The American Printer, in praise of A Book of American Trade-Marks & Devices by Joseph Sinel:

American trademarks and devices have never been set forth so attractively…. A great many emblems are shown in posteresque style, one to a page, and others are grouped four or more on a page in an attractive manner. With black there are combined such colors as blue, brown and plum. The colors in almost every case are those middle hues that are brilliant yet restful.

The one feature that helps to make the book so uniformly good is that Mr. Sinel has redrawn all of the trademarks, and in most cases has improved their rendering. [1]

The last sentence flummoxed me. I was skeptical about Gress’ claim that Sinel had redrawn all of the trademarks in the book. It seemed both a fantastic idea and, if true, a tremendous amount of work since the book contained nearly 200 designs. However, the claim was trumpeted in advertisements for the book, so it was not something Gress had invented. To see what Sinel’s redrawing actually entailed I tried comparing his rendering of some of the trademarks in the book to other versions I had in my files and came to the conclusion that he changed the original mark in ways both subtle and significant. 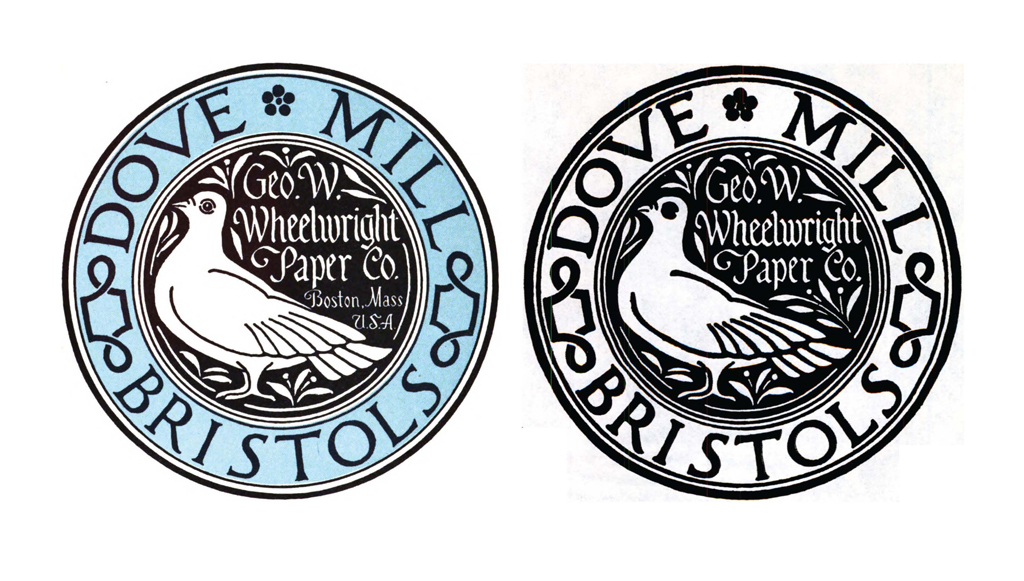 Comparison of Dove Mill Bristols mark. Original on the left and Sinel redrawing on right. 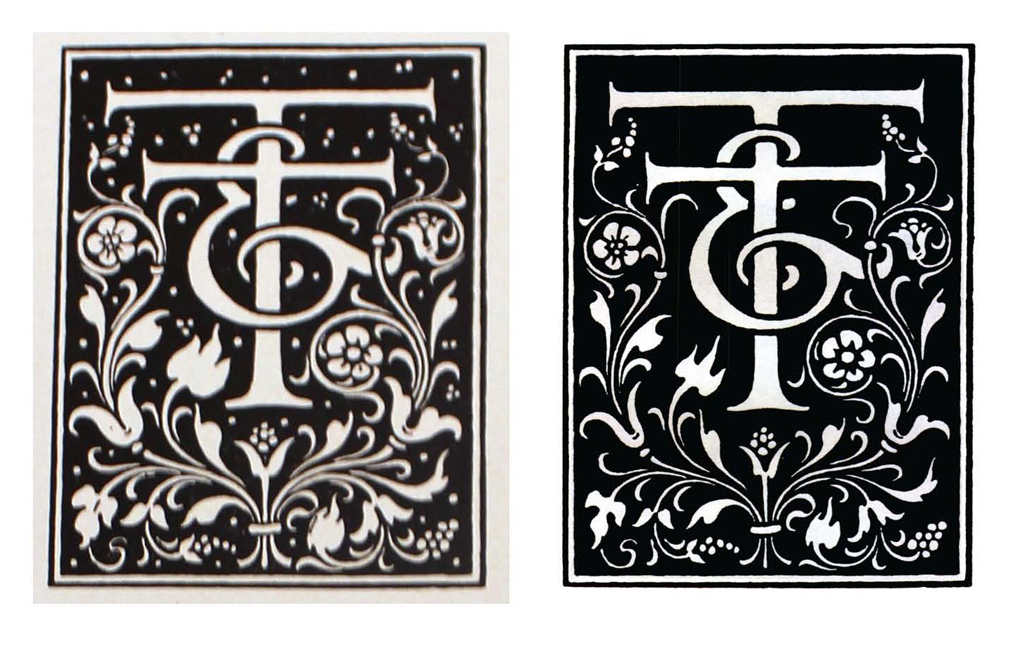 Comparison of Taylor & Taylor mark. Original by Frederic W. Goudy on the left and redrawing by Sinel on the right.

The comparisons above of the Dove Mill Bristols mark of the Geo. Wheelwright Paper Co. show Sinel’s redrawing to be significantly heavier. Moreover, he has “improved” the design by replacing “Boston Mass / USA” with a spray of leaves. But overall Sinel’s version is clumsy. The ornament between “Dove” and “Mill” has filled in as has the bird’s eye.

The comparisons of the Taylor & Taylor mark also show Sinel editing the design. Here he has omitted the criblé-like dots that Goudy sprinkled throughout to both link the mark to 16th century French printers’ marks—Taylor & Taylor was a highly regarded San Francisco printing firm—but also to lighten the black background. Sinel’s version is anemic. His redrawing of the floral elements has shriveled that part of Goudy’s design. (See especially the leaf to the immediate left of the stem of the T.)

In both examples I think that Sinel traced over enlargements of printed samples of each mark and in doing so he tried to “clean up” any imperfections or ragged edges by simply adding a line around each element. This explains both the heavier version of the Dove Mill Bristols mark and the weakened version of the Taylor & Taylor mark. Because the latter design is reversed out of black Sinel would have been shrinking it as he was trying to “fix” it.

The reason for redrawing a design
In an age awash in digital images it is easy to forget how difficult it was, even in the recent past, to reproduce an image from a printed source. What follows is an attempt to explain how and why Sinel redrew existing trademarks and devices for inclusion in his book.

To gather material for A Book of American Trade-Marks & Devices Sinel would have most likely clipped items from advertisements, direct mail items such as circulars, magazines, and books. Most of the sample marks would have been small in size, much smaller than the one-to-a-page marks in his book. And they would have been printed letterpress. Thus, when he enlarged them to fit his page design he would have discovered that the marks were underinked or overinked, had areas that had filled-in, or lines that were broken. [2]

In his introduction Sinel thanks the owners and designers of the marks for their cooperation. Presumably he wrote to them not only for their permission to reproduce the marks, but also for either original artwork or clean samples (electros, zincos, proofs on coated paper) that he could use. [3] It is highly unlikely that he received much, if any, original artwork. And any electros, zincos or proofs would have still been small in size.

In order to have neat looking images in his book, Sinel would have been compelled to do some amount, however trivial, of redrawing. Such an activity would have been seen as normal in the 1920s. Bruce Rogers is famous for doing it and, as I have shown in several posts, Dwiggins often engaged in the practice. [4] The problem with Sinel’s redrawings is that they are often clumsy and, worse, deceitful. They are not accurate representations. Sinel seems to have been a lackluster draughtsman with skills far below those of such contemporaries as Thomas Maitland Cleland, Walter Dorwin Teague, and Clarence P. Hornung. [5]

Joseph Sinel and W.A. Dwiggins
“Noteworthy and delightful trade devices by such designers as W. A. Dwiggins, Harvey Hopkins Dunn, T. M. Cleland, C. B. Falls, Edward Penfield, René Clarke and others, relieve the dull level of the vast field of American trade marks,” writes Joseph Sinel in the introduction to A Book of American Trade-Marks & Devices. Backing up this statement, he included four marks by Dwiggins in the book: The White Elephant, Thedam Püterschein’s Sons, The American-Scandinavian Foundation, and the Chemical Paper Manufacturing Co. [6] (Three of them were included by Dwiggins in 22 Printers’ Marks and Seals.)

Once I became aware of the claim that Sinel had redrawn every mark in A Book of American Trade-Marks & Devices I looked through my copy again to see if that included the four marks by Dwiggins. To my surprise, it did. I was surprised because there is no evidence that either he or anyone else, including his biographers Dorothy Abbe and Bruce Kennett, had noticed this. [7]

Below are side-by-side comparisons of Dwiggins’ original marks on the left and Sinel’s redrawings of them on the right. The most egregious of his redrawings is The White Elephant mark. His lettering is heavier and stiffer, the “W” is significantly smaller, and the elephant has been redrawn. The pewter pitcher of the Thedam Püterschein’s Sons mark is lumpy—and it has been colored which Dwiggins never did. The American-Scandinavian Foundation mark is close to the second one Dwiggins made for the purpose of stamping (the gold-on-red version below), but the depiction of the Viking ship is clearly different. The Chemical Paper Manufacturing Co. mark is Sinel’s best rendition. It could even be considered an improvement on Dwiggins’ design. Note how he has changed the perspective of the loom, slightly shifted the position of the Indian, and clarified the pattern being woven. In sum, Sinel has engaged in a redesign, not a redrawing. 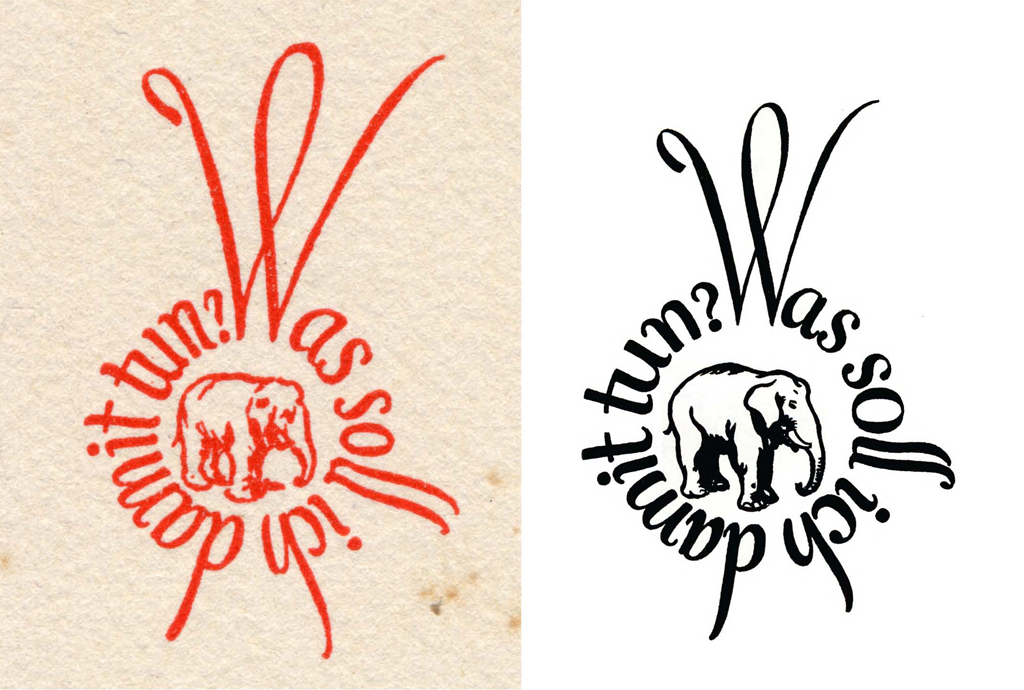 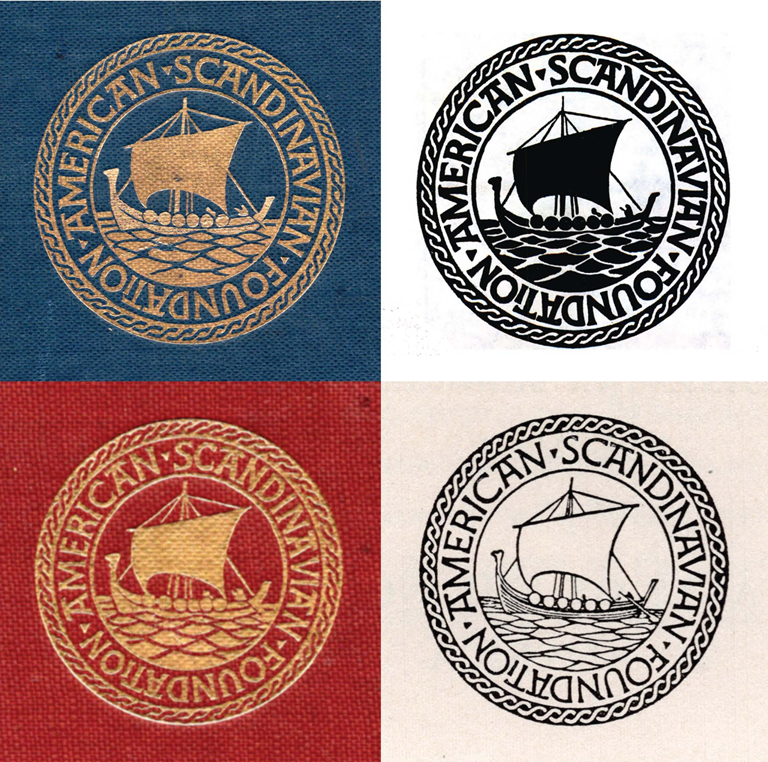 In the two posts on 22 Printers’ Marks and Seals I argued that Sinel’s book provided the model—and possibly the inspiration—for Dwiggins’ portfolio. That leaves open the question, “Was he aware of Sinel’s redrawing of his designs?” And, if so, did he complain to Sinel? Unfortunately, I have no answers to either question.

A final note
22 Printers’ Marks and Seals, influenced by Sinel’s book, may itself have influenced another book. A year and a half after its publication, Trade-Marks Designed by Clarence P. Hornung (New York: Caxton Press, 1930) appeared. [8] Although the format of Hornung’s book is similar to Dwiggins’ in allocating one design per page (with the two-line caption on the outer edges of each double-page spread), it is a much more sumptuous portfolio. It contains fifty-three trademarks, some described as “projected” and others as “adapted and redrawn”. They are shown, each within a blind embossed frame, on both pages of a double-page spread (made possible by printing on french-folded sheets). Twelve different colors plus black are used. The book includes a preface by Harry L. Gage of Mergenthaler Linotype Co., and a list of the designs. 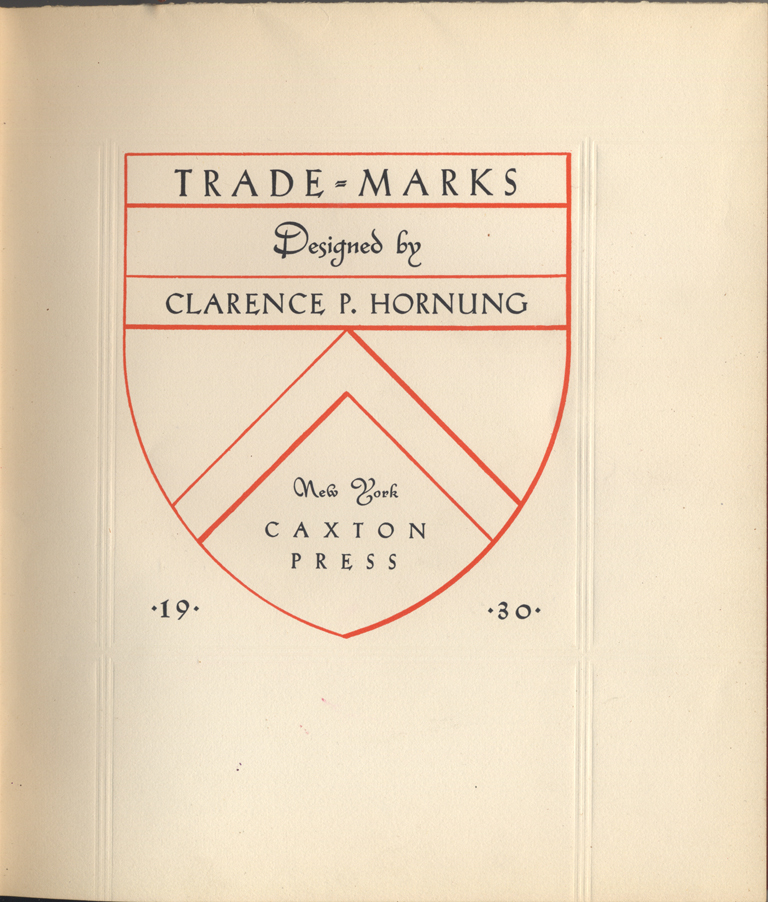 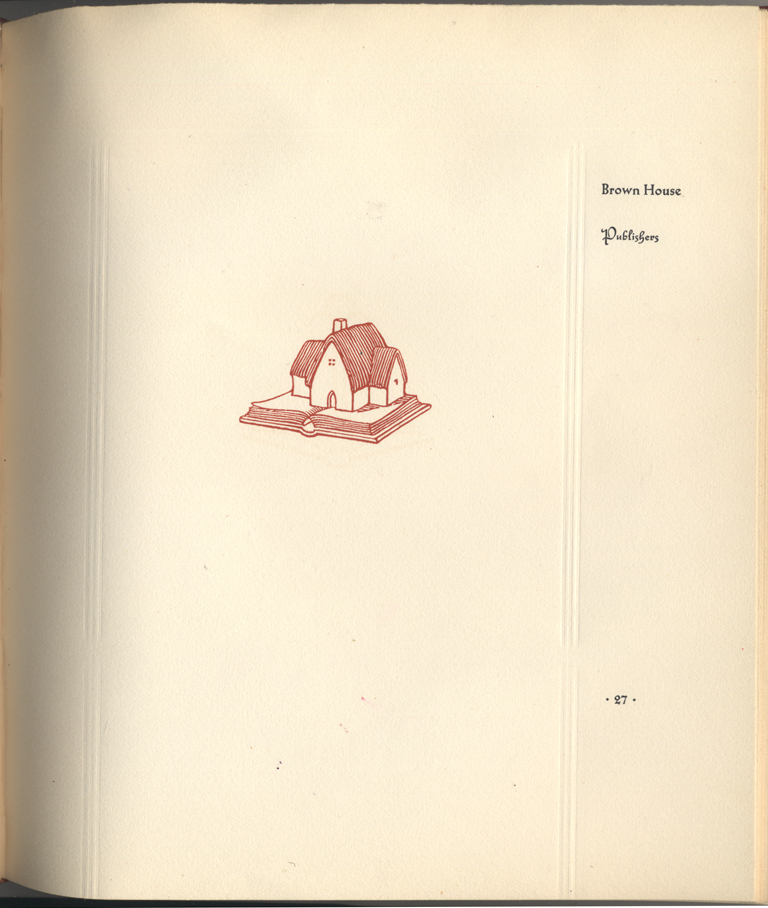 Notes
1. The American Printer vol. 79, no. 12 (December 20, 1924), pp. 37–38.
2. To enlarge a design Sinel would have either used a lucidagraph (patented in 1894) or a photostat.
3. Zincos refers to zinc photoengraved plates. Electros was the printing trade shorthand for electrotype plates which are facsimiles made from an original through the electro-chemical depositing of metal on a surface. For more on electrotyping see Electrotyping and Stereotyping by Harris B. Hatch and A.A.Stewart (New York: The Committee on Education, United Typothetae of America, 1918). Zincos were commonly used to convert original line art (such as the design of a trademark) into a relief form for letterpress printing. Electros were used to reproduce designs already in relief for letterpress printing (such as woodcuts, photoengraved plates, or standing type) to either allow the items to be reused for another job or to reduce wear and tear on them. Entire books were often reprinted from electrotype plates.
4. For examples of Rogers’ redrawing of borders and other elements see The First Flowering: Bruce Rogers at the Riverside Press, 1896–1912 by Jerry Kelly (Boston: David R. Godine, Publisher, 2008). For examples of Dwiggins redrawing images and type see The Definitive Dwiggins no. 37 and The Definitive Dwiggins no. 62.
5. For examples of the work of these three men see The Decorative Work of T.M. Cleland: A Record and a Review (New York: The Pynson Printers, 1929); “Some Recent Examples of Decorative Designs and Lettering Done by Walter Dorwin Teague” in The Printing Art vol. XXIX, no. 1 (March 1917); and “An Exhibit of Decorative Designs for Advertising Purposes as Done by Clarence Pearson Hornung” in The Inland Printer vol. 68, no. 5 (February 1922) and “The Decorative Work of Clarence P. Hornung: An Exhibition” in The Printing Art vol. 41, no. 2 (April 1923).
6. See A Book of American Trade-Marks & Devices by Joseph Sinel (New York: Alfred A. Knopf, 1924), p. 9 (The White Elephant), p. 29 (Chemical Paper Mfg. Co.), p. 37 (Thedam Püterschein’s Sons), and p. 44 (The American-Scandinavian Foundation).
7. The copy of Sinel’s book that was given to Dwiggins is in the Dorothy Abbe Book Collection. The only annotation she made to it was to write “NO” next to the Chemical Paper Manufacturing Co. mark. W.A. Dwiggins: A Life in Design by Bruce Kennett (San Francisco: Letterform Archive, 2018) reproduces three of the Dwiggins marks from Sinel’s book without indicating their source: The American-Scandinavian Foundation (p. 82), Thedam Püterschein’s Sons (p. 87), and Chemical Paper Manufacturing Co. (p. 154). To be fair to both Abbe and Kennett, I was not aware of Sinel’s redrawing of Dwiggins’ marks until I was preparing my posts on 22 Printers’ Marks and Seals.
8. Trade-Marks Designed by Clarence P. Hornung was printed in December 1930.