The Definitive Dwiggins no. 223—Cold Type

The Definitive Dwiggins no. 81A—W.A. Dwiggins and “graphic design”: A brief rejoinder to Steven Heller and Bruce Kennett

When I wrote The Definitive Dwiggins no. 81 —Who Coined the Term “Graphic Design”? in January 2018 I thought I had finally put to rest the long-running claim, begun in 1983 by Philip B. Meggs, that W.A. Dwiggins coined the term “graphic design”. [1] The claim has been taken up as gospel by numerous graphic design historians and general graphic design writers for over three decades. I was one of the first to accept it when I wrote a profile of Dwiggins for Design Issues in 1984. [2] But in 2014 I wrote two posts for my Blue Pencil blog on the true origins of the term “graphic design”—used in the Meggsian sense—that debunked the attribution to Dwiggins. [3] When the Kickstarter campaign for W.A. Dwiggins: A Life in Design by Bruce Kennett began trumpeting the claim anew, I wrote The Definitive Dwiggins no. 81 to reiterate the point that it was Frederick H. Meyer—not Dwiggins—who deserves the credit for introducing the phrase “graphic design”.

Meyer was the director of the California School of Arts and Crafts and one of its instructors. In 1917 he taught a class entitled “Graphic Design and Lettering”.  This is the description for it:

Note: Graphic Design deals with the principles of lettering and commercial work and the various processes of reproducing the drawings. [4] 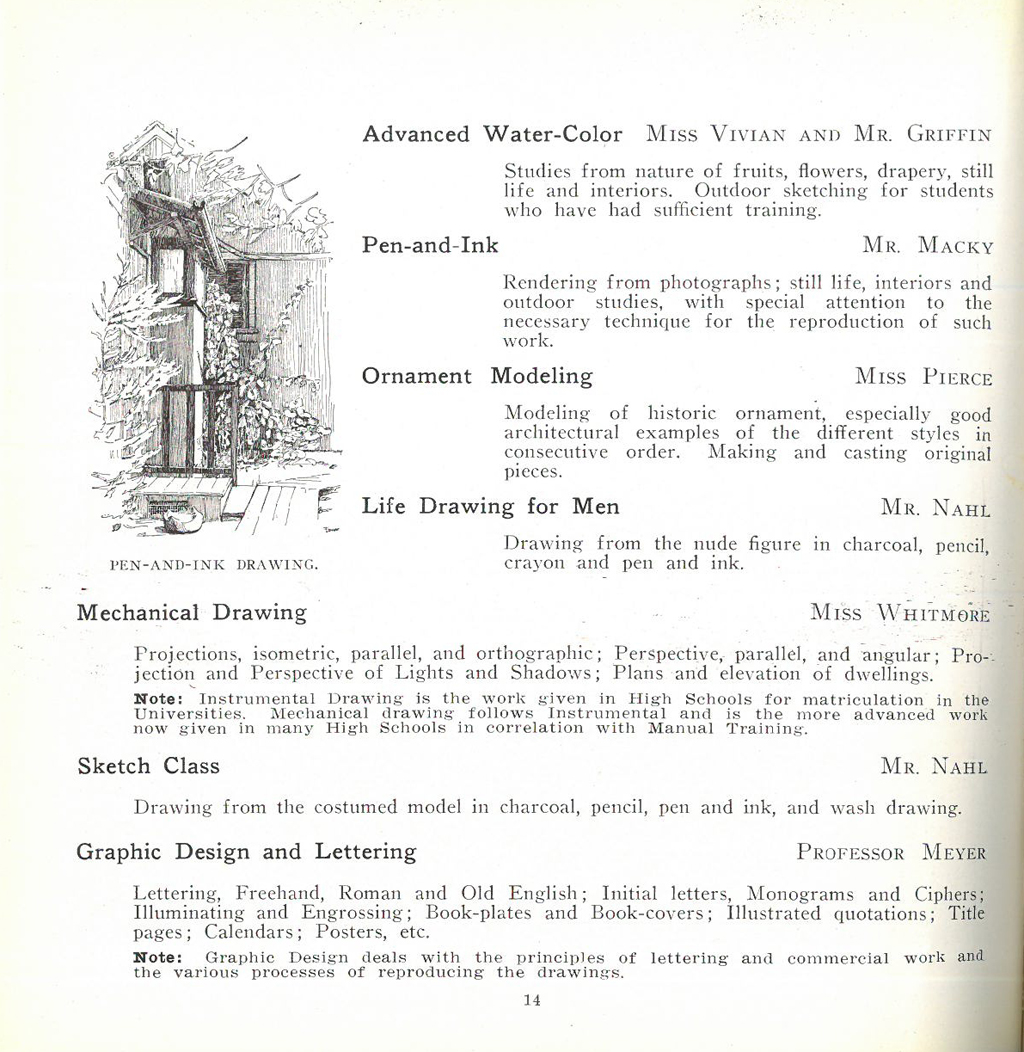 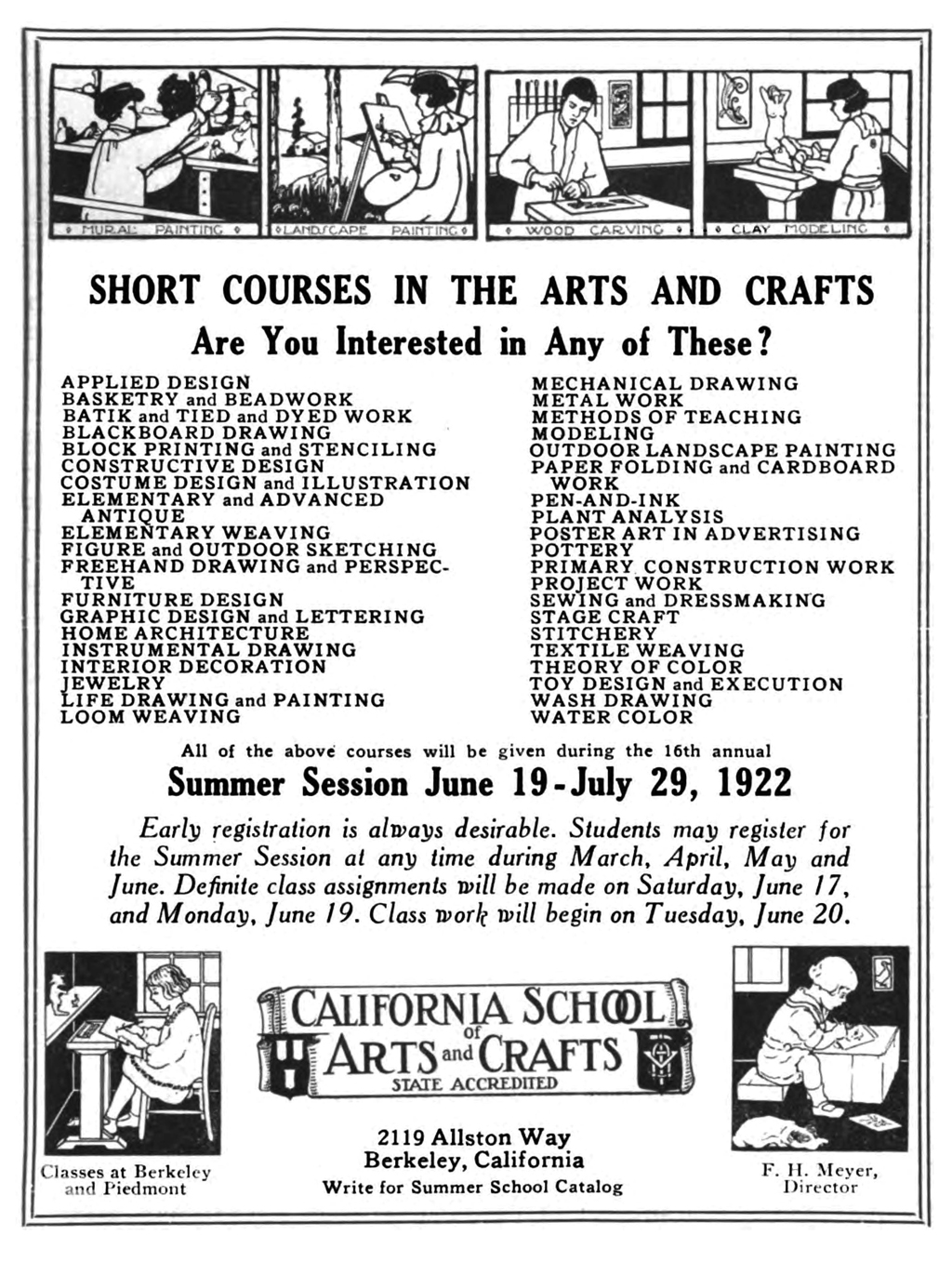 Advertisement for the 1922 Summer Session of the California School of Arts and Crafts. From The Western Journal of Education (March 1922), p. 21. Note the inclusion of a course in “Graphic Design and Lettering”.

Meyer’s note explaining graphic design is more succinct and clearer than Dwiggins’ 1922 comment that “Advertising design is the only kind of graphic design that gets home to everybody.” That sentence is the only use of the phrase “graphic design” in his article “New Kind of Printing Calls for New Design”. The casual nature of the statement is proof to my mind that Dwiggins was not aiming to create a name for a new profession, but that he was trying to describe the activities associated with it.  [5]

But old beliefs die hard. Kennett’s biography of Dwiggins ignores my research. Steve Heller, in his foreword to the book, repeats the assertion that Dwiggins “coined the term ‘graphic design’ (or ‘graphic designer’)”. In the main text, Kennett hedges, writing “In an August 1922 Boston Evening Transcript article on this subject [that recent developments in printing technology made possible new approaches to design], Dwiggins appears to have been one of the first writers ever to use the term ‘graphic design.'” But in his note to this statement he disingenuously comments that,

This note is clearly a reference to one or more of my posts. But what is the flap? No one, including Kennett, has challenged my research. His attempt to brush off my documented claim that Meyer used the term “graphic design” several years before Dwiggins did (and in a more precise way), seems to indicate that he prefers cherished beliefs more than facts. Even Kennett’s wiggle that Dwiggins was an “early user of the expression” is weak. As I have indicated, his use was incidental, if not accidental. Dwiggins had numerous opportunities after 1922 to describe himself as a graphic designer and he never did. he constantly chose the term “artist” instead, only occasionally qualified with “designer”. 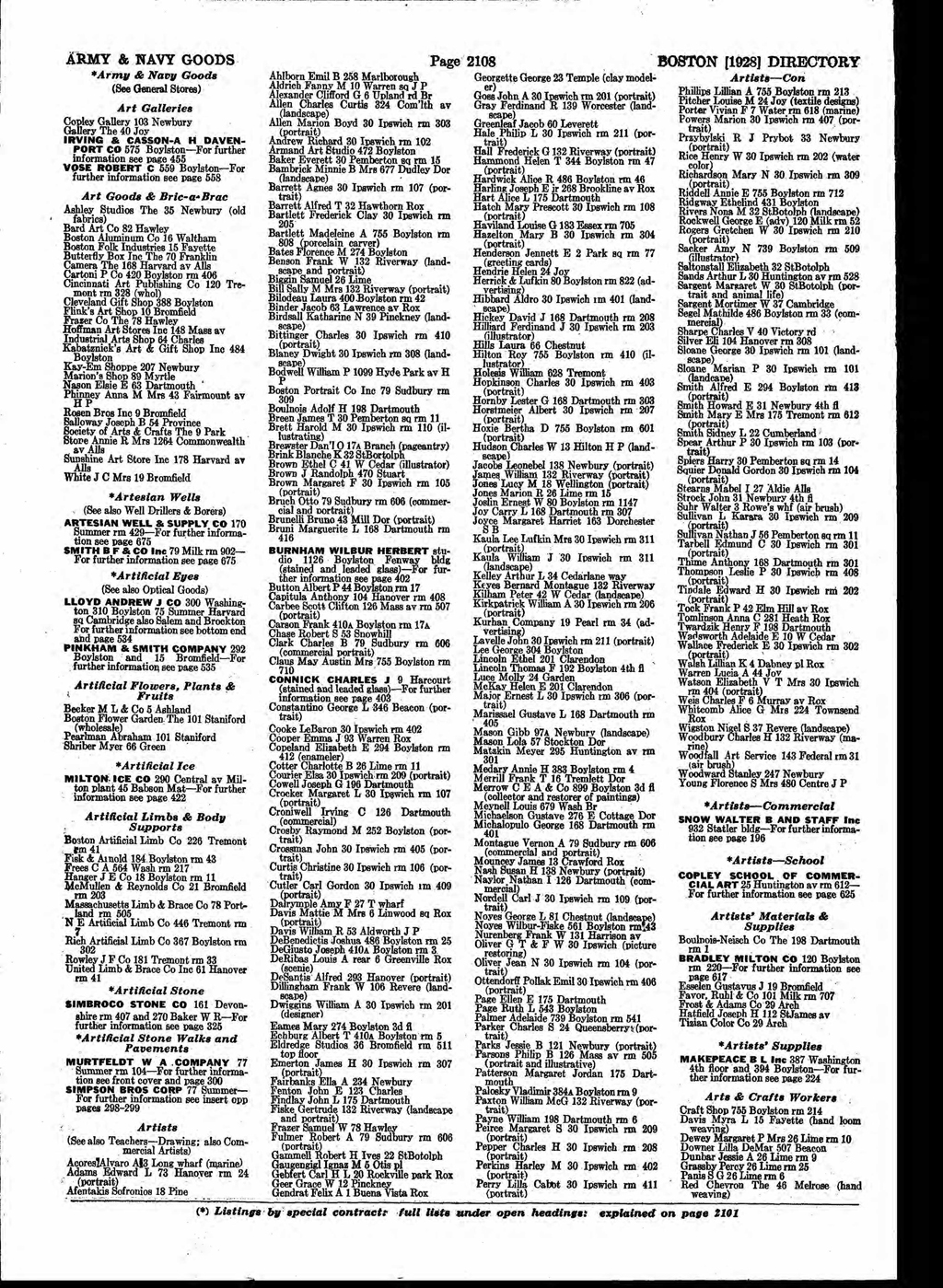 W.A. Dwiggins entry in business section of The Boston Directory (Boston: Sampson & Murdock Company, Publishers, 1928), p. 2108. The entry is near the bottom of the second column from the left.

In the professional section of the annual Boston city directory Dwiggins had his choice of listing himself as an artist, a commercial artist, or a designer—but not as a graphic designer. In the years from 1922 to 1934 (the last year in which he appears), he always chose artist. Furthermore, he only briefly availed himself of the opportunity to specify what kind of an artist he was. For the years 1927 to 1929 he was listed under Artists as “Dwiggins Wm A 30 Ipswich rm 201 (designer)”; but in 1933 and 1934 his listing under Artists changed to “Dwiggins Wm A 30 Ipswich rm 104 (portrait)”. [7] Most of his contemporaries (e.g. Charles Capon, Adrian Iorio, Thacher Nelson, and George Trenholm) listed themselves as commercial artists until 1930 when many switched to designer as a preferred designation.

From 1923 to at least 1929, Lee & Kirby, Inc. published several directories (national, Eastern United States, Chicago, and New York) of people involved in the “advertising arts and crafts” profession. Dwiggins appeared in several of them always in the “Index of Artists,” never in the design index or the lettering index, both of which included his schoolmate Oswald Cooper. [9]

Even as recently as March 12, 2020 Heller has continued to propagate the falsehood that Dwiggins used the phrase “graphic designer”. In “Where Does the term ‘Graphic Designer” Come From?” (a post on the new Print website), he writes, “But on Aug 29, 1922, W.A. Dwiggins in the Boston Evening Transcript used the phrase ‘graphic designer’ to describe his own work as illustrator, advertising artist, calligrapher, typographer, type designer and book designer.” [10] Dwiggins used the term “graphic design” once in “New Kind of Printing Calls for New Design,” but he never used the term “graphic designer” in the article. Furthermore, the article was not a description of his work, but of a “new kind of printing,” a third class of printing “more or less modified by artistic taste” that had joined the existing classes of plain printing (e.g. telephone directories and school catalogues) and fine printing (e.g. books designed by Bruce Rogers).

In continuing to repeat the discredited idea that Dwiggins coined the expression “graphic design” Heller and Kennett are graphic design history’s equivalents of flat earthers, creationists, and birthers desperately clinging to received verities in the face of scientific truth. Why keep on insisting that Dwiggins did something he did not do? Dropping this claim does not diminish his reputation as a graphic designer.

Notes
1. Actually, what Meggs wrote was, “… It was not until 1922 , when the outstanding book designer William Addison Dwiggins coined the term graphic designer to describe his activities as an individual who brought structural order and visual form to printed communications, that an emerging profession received an appropriate name.” See the Foreword to A History of Graphic Design (New York: Van Nostrand Reinhold, 1983).
2. See “Tradition and Innovation: The Design Work of William Addison Dwiggins” by Paul Shaw in Design Issues vol. 1, no. 2 (Fall 1984), pp. 26-41.
3. Meggs’ claim was repeated verbatim by Alston Purvis, Meggs’ successor, in subsequent editions of A History of Graphic Design. See Meggs’ History of Graphic Design (6th edition) by Philip B. Meggs and Alston Purvis (Hoboken, New Jersey: John Wiley & Sons, 2016), p. viii. It is also repeated in a slightly different form on p. 203.
4. “Graphic Design and Lettering” course entry in California School of Arts and Crafts Announcement of Courses 1917–1918 (Berkeley, California: California School of Arts and Arts, 1917), p. 14.
5. “New Kind of Printing Calls for New Design” by W.A. Dwiggins. Published in the special Graphic Arts Section of the Boston Evening Transcript 29 August 1922. The article is reprinted in its entirety in The Origins of Graphic Design in America 1870–1920 by Ellen Mazur Thomson (New Haven and London: Yale University Press, 1997), pp. 184–189; and in Looking Closer 3: Classic Writings on Graphic Design edited by Michael Bierut et al (New York: Allworth Press, 1999), pp. 14-18.
6. W.A. Dwiggins: A Life in Design by Bruce Kennett (San Francisco: Letterform Archive, 2018), p. vi; and pp. 184 and 462.
7. See The Boston Directory (Boston: Sampson & Murdock Company, Publishers, 1922–1934). Why Dwiggins dropped the qualifier “designer” for the years 1930–1932 is unclear.
8. See Year 1905 Town of Hingham, Massachusetts: List of Persons Assessed a Poll Tax (Hingham, Massachusetts: Fred H. Miller, Printer, 1905) and its successors for the years 1906–1921; and Street List of Residents Over 20 Years of Age in the Town of Hingham 1922 (Hingham, Massachusetts: Journal Print, [1922]) and its successors for the years 1924, 1928, 1933, 1934, 1938–1940, and 1945–1947. There are no surviving street lists for the other years of Dwiggins’ life in Hingham.
9. See The National Edition of Advertising Arts and Crafts vol. I 1925 (Long Island City: Lee & Kirby, Inc., 1925), The National Edition of Advertising Arts and Crafts vol. II 1926 (Long Island City: Lee & Kirby, Inc., 1926), and Advertising Arts and Crafts vol. I, 1928 (Long Island City: Lee & Kirby, Inc., 1928). Dwiggins is not listed for the other years.
10. When Heller made a similar assertion in 1996, it was ok since my research had not yet occurred. See “The Man Who Invented Graphic Design” by Steven Heller in Eye: The International Review of Graphic Design 23 vol. 6 (Winter 1996), p. 26.

I want to thank Nick Sherman for bringing Heller’s recent Print post to my attention as well as pointing out that The Definitive Dwiggins no. 81 had two faulty links.