The Definitive Dwiggins No. 222—Let’s be Misers with Golden Selling Hours

The Definitive Dwiggins no. 223—Cold Type 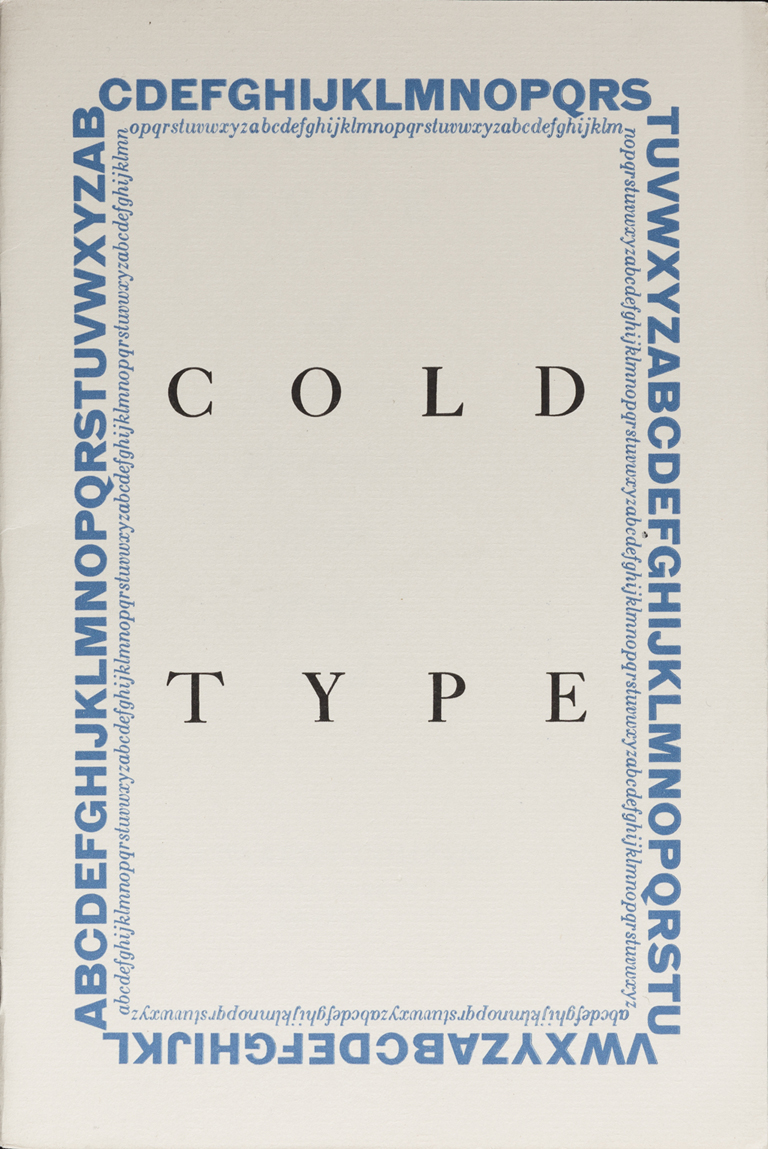 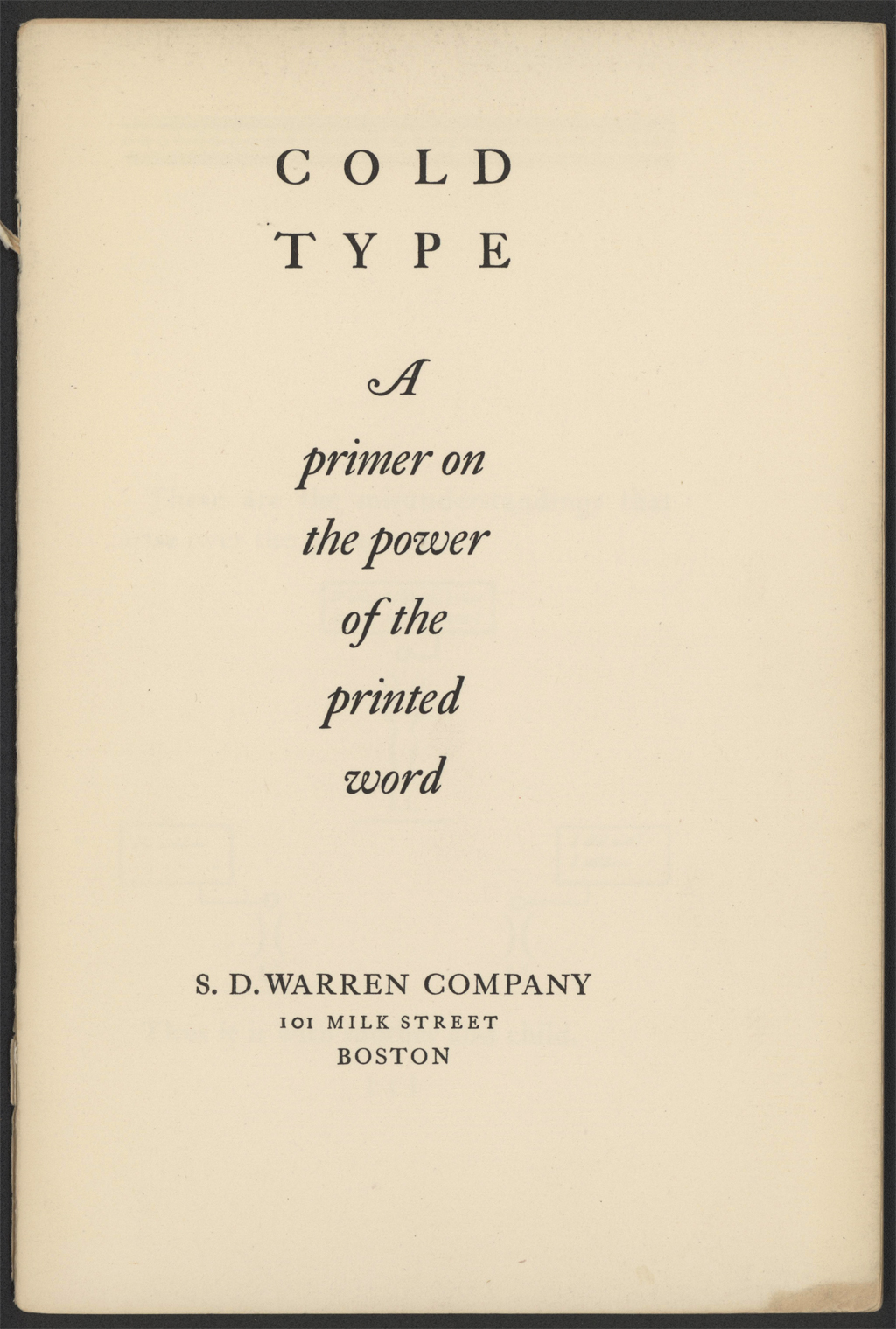 Let’s be Misers with Golden Selling Hours, published in 1925, was the subject of The Definitive Dwiggins no. 222. Dwiggins designed six other “primers” for S.D. Warren Co. that same year, among them Cold Type: A primer on the power of the printed word, which is almost as unusual in its style of illustration. [1] It is a shorter booklet—only twenty pages plus cover—set almost entirely in Caslon. The exception is the cover which has a border in blue composed of two repeating alphabets: Gothic No. 578 capitals on the outside and Modern No. 8 Italic lowercase on the inside. [2]

There is nothing about the appearance of Cold Type that would indicate Dwiggins had any involvement in it, other than perhaps its sophisticated typography (e.g. the way in which the brace on p. 16 leads the eye to the large type on p. 17). But in the early 1940s Dwiggins told Ruth Noble, a librarian at the Rhode Island School of Design, that he contributed “drawings” to and “assisted and advised on typographical layout and general design” on nearly all of the Warren primers, including Cold Type and Let’s be Misers with Golden Selling Hours. [3]

What makes Cold Type noteworthy are the three illustrations that appear on pages 5–7. All of them are assembled from type material: letters, punctuation, and rules. This was not an innovative idea, though it seems to be the first time that Dwiggins employed it. [4] Not only were Bruce Rogers (1870–1957) and Albert Schiller (1898–1970) famous for such things, but a number of other designers tried their hand at “type pictures” in the 1920s and 1930s, including Rudolph Ruzicka (1883–1978) and El Lissitzky (1890–1941). [5] The latter did so most memorably for the poetry collection Dlja golosa (For the Voice) by Vladimir Mayakovsky (1923). 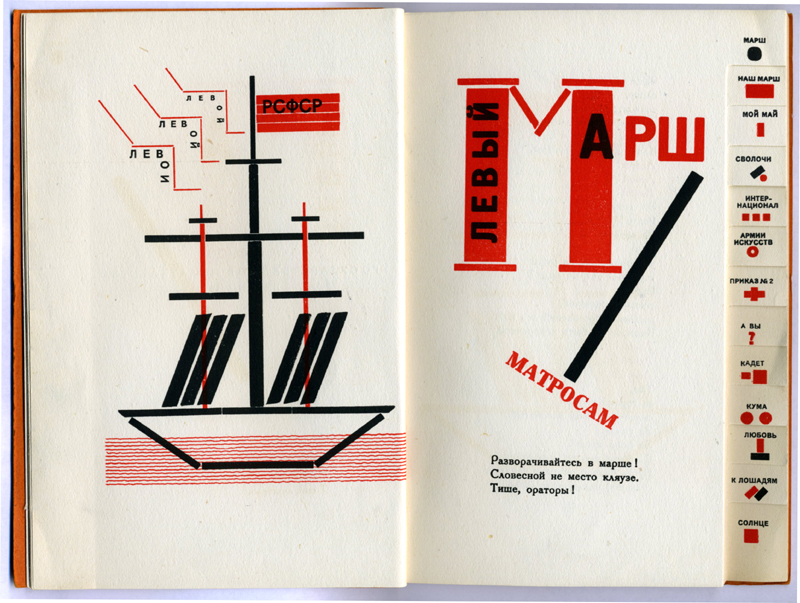 Spread from Dla golosa (For the Voice) by Vladimir Mayakovsky (Berlin: Gosizdat / Lutze and Vogt, 1923). Typography and design by El Lissitzky. Image from The Cooper Hewitt Museum Design Library. 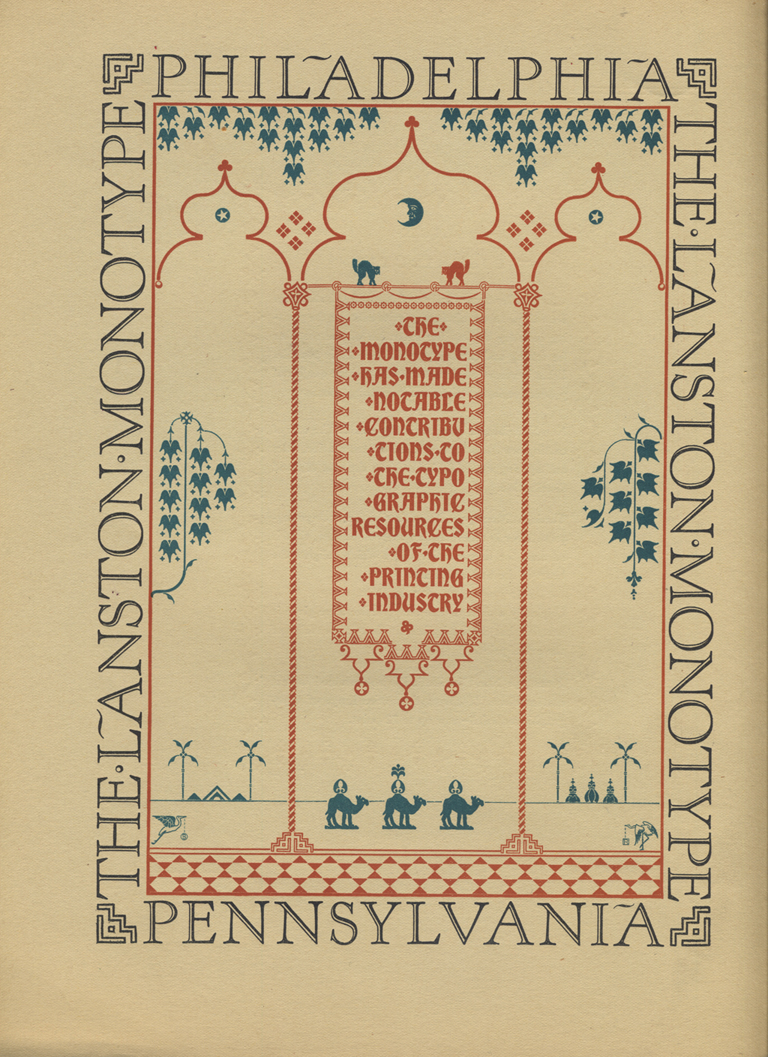 “The Monotype Has Made Contributions to the Typographic Resources of the Printing Industry” (Philadelphia: The Lanston Monotype Company, c.1927). Typographic design by Bruce Rogers. 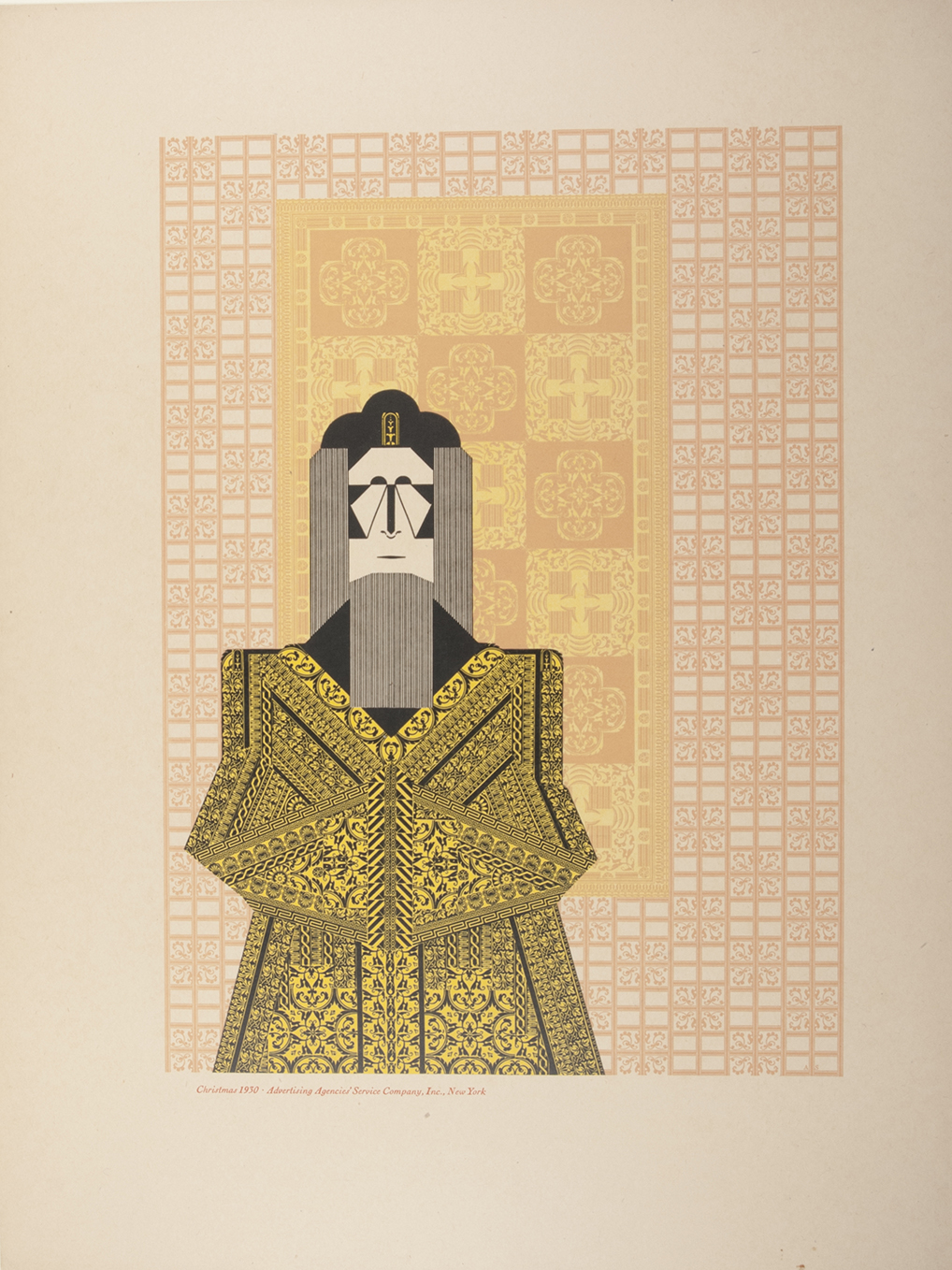 Dwiggins’ type pictures in Cold Type are starkly minimalist compared to the baroque creations of Schiller and Rogers or even the constructivist design of El Lissitzky. They are not elaborate, but stripped down to essentials. On p. 5 Dwiggins has built a mother from an O, two rules, two braces, and two Ls. Her children are each made of an O, two parentheses (giving her a zaftig figure), and two Ls. Compare them to Schiller’s mandarin. And, unlike Rogers, Dwiggins has avoided the use of pictorial pi ornaments such as camels, storks, and black cats.

On pages 6 and 7 the figures are mechanical stick figures in contrast to the organic stick figures of Let’s be Misers with Golden Selling Hours. Type rules dominate over letters and punctuation. Os are again heads, upside down Vs are lampshades, and a sideways C acts as a pair of arms; a rotated parenthesis serves as a briefcase handle. The illustrations are less witty than the one on page 5, but more fitting for “the machine age,” as the 1920s have been dubbed by some art historians. [6] 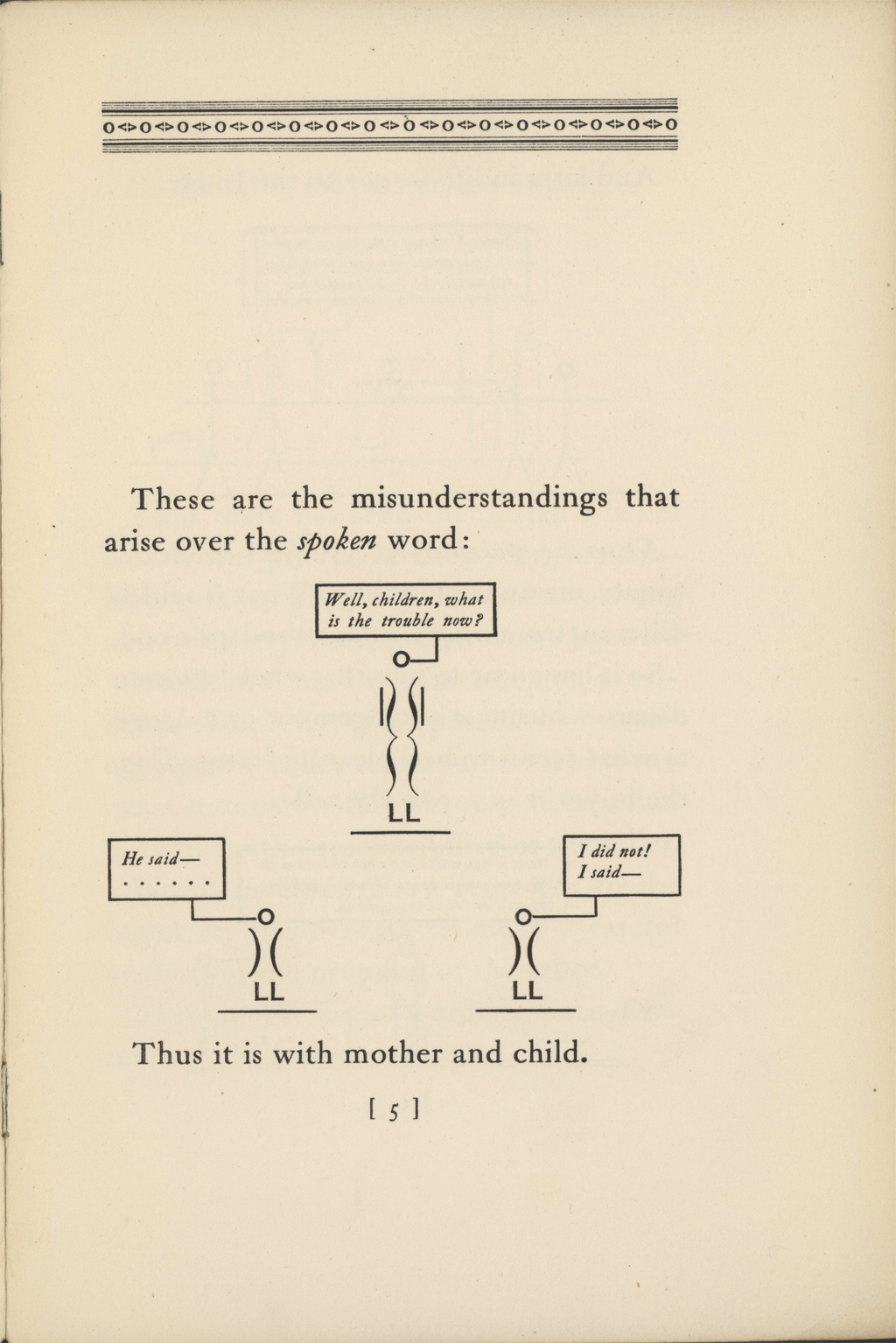 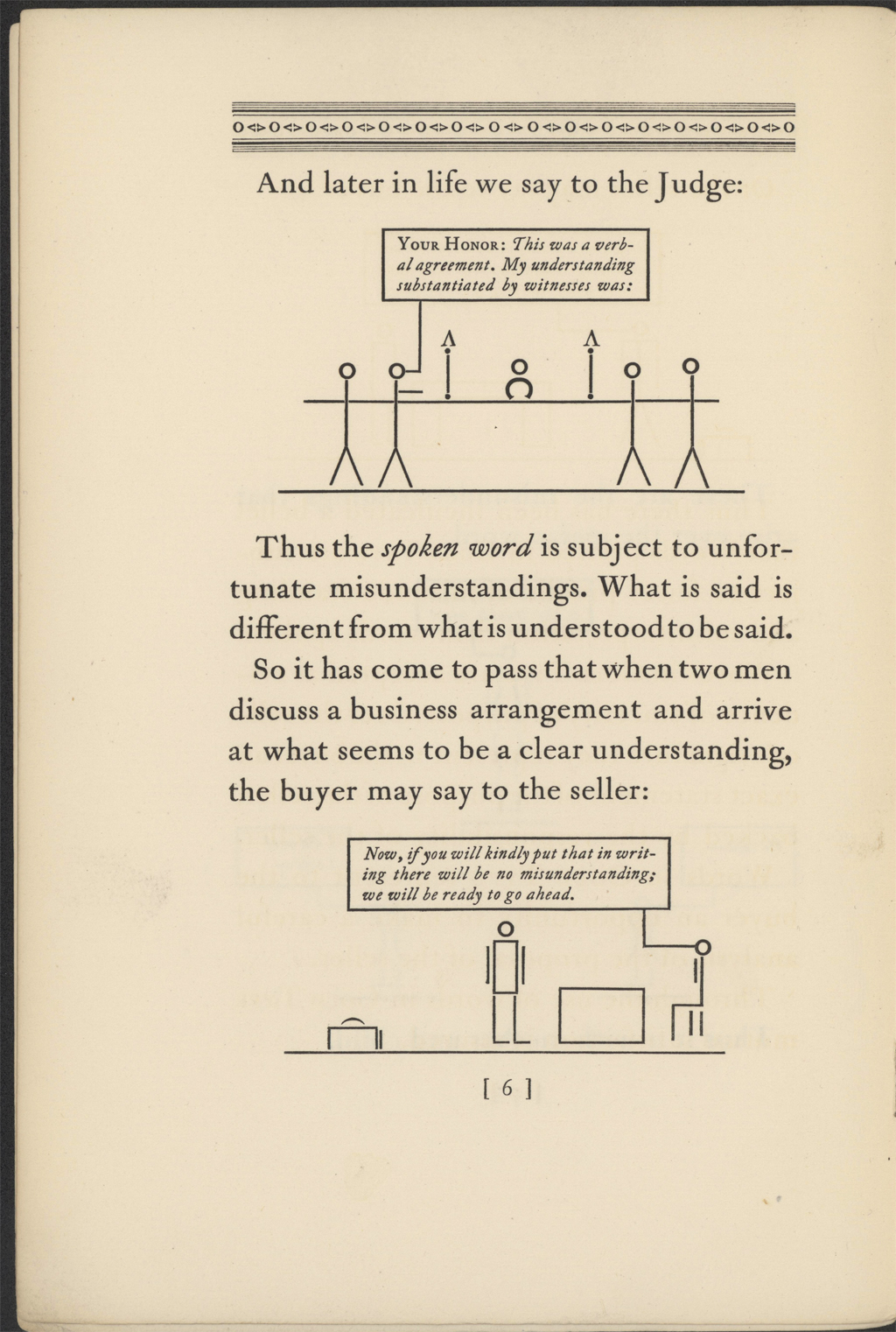 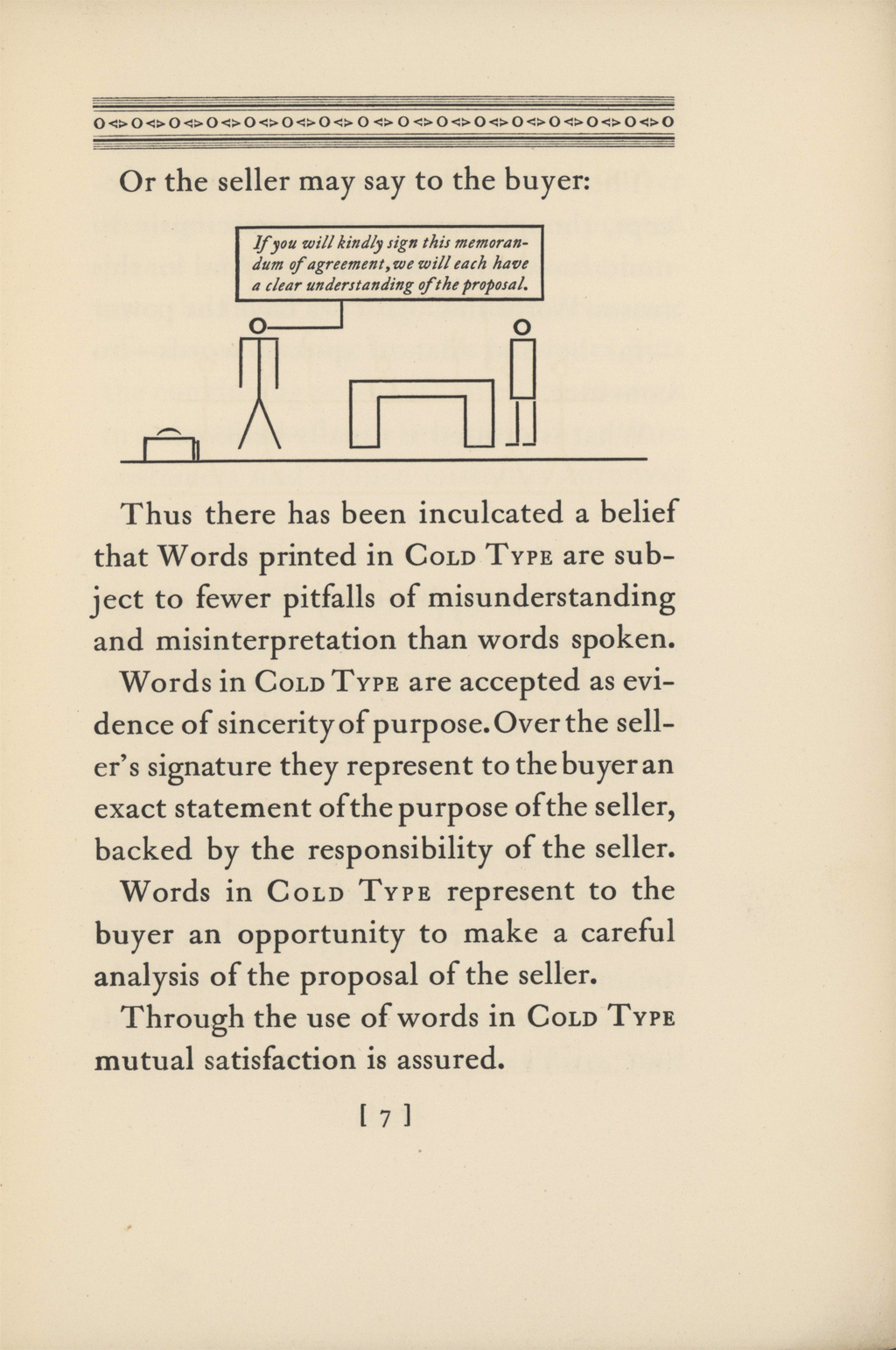 Cold Type is not wholly a product of the machine age. Not only is the text set in Caslon, the default traditionalist typeface, but the illustrated pages have decorative headpieces. They are constructed of alternating Os and pairs of sideways Vs (mimicking egg-and-dart patterns) between two sets of five rules. The effect is a typographic wainscoting. On pages 6 and 7 it could be interpreted as part of the room that the figures are in, rather than as an element of the text page. But such a view cannot be sustained with page 5.

Finally, in comparing Cold Type to Let’s be Misers with Golden Selling Hours, it should be noted that italic type has replaced Dwiggins’ casual handwriting in the speech bubbles. And the organic bubbles themselves are now boxes. 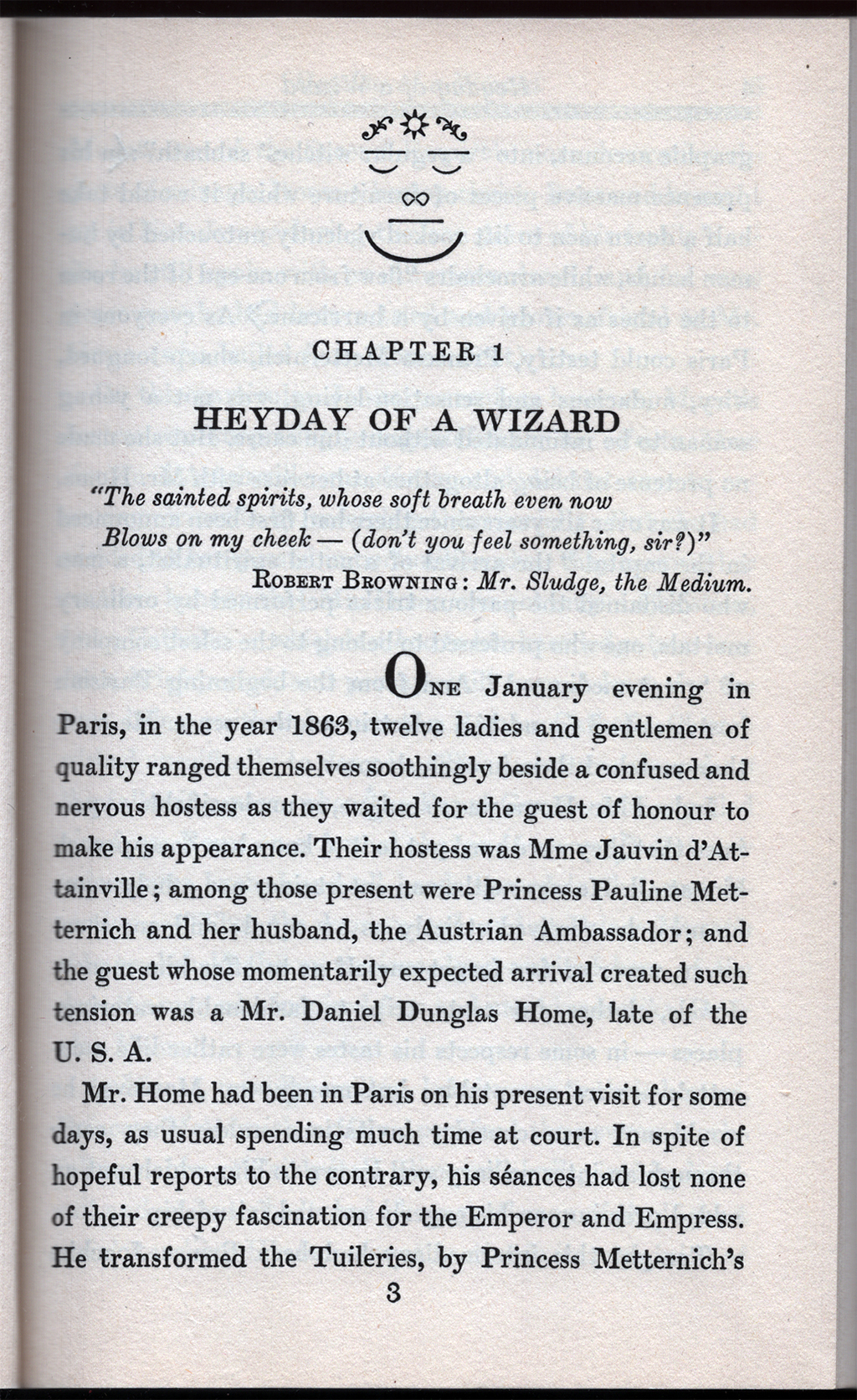 Heyday of a Wizard: Daniel Home, the Medium by Jean Burton (New York: Alfred A. Knopf, 1944). Opening of Chapter 1. Book design by W.A. Dwiggins. Note the deep indent that positions the O directly under the chin of the typographic portrait of Daniel Home.

5. Albert Schiller worked for the Advertising Agencies’ Service Company, a type house in New York City, from 1924 to 1957. He called his designs typographic pictures. An article on his work labelled them “typosignets”. See “Typographic Pictures” by Albert Schiller in The American Printer (December 1927), pp. 40-41 and “Typosignets: The Work of Albert Schiller” by Harold E. Waite in in the Gutenberg-Jahrbuch for 1952. And my January 26, 2011 Blue Pencil review (re: pp. 29–30) of Born Modern: The Life and Design of Alvin Lustig has more on 1920s and 1930s experiments with type material.
6. The Machine Age in America 1918-1941 by Richard Guy Wilson, Dianne H. Pilgrim, and Dickran Tashjian (Brooklyn: The Brooklyn Museum of Art / Harry N. Abrams, 1986). This is the catalogue for a landmark 1986 exhibition at The Brooklyn Museum of Art that brought together fine art, industrial design, product, design, graphic design, and more created between the two world wars.