The Definitive Dwiggins no. 156—Nobodaddy

The Definitive Dwiggins no. 204—Streets in the Moon 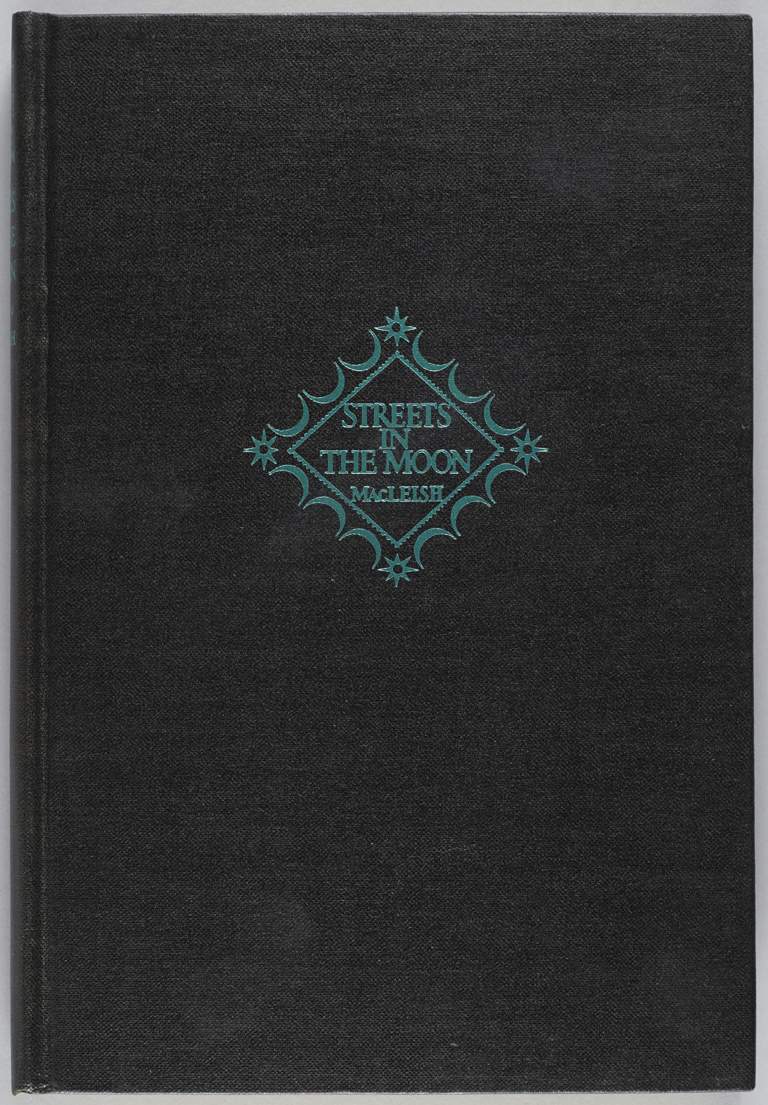 Binding of Streets in the Moon by Archibald MacLeish (Boston and New York: Houghton Mifflin Company, 1926). Decoration, lettering, and design by W.A. Dwiggins.

“Didn’t you like the drawing,” Maurice Firuski, owner of the Dunster House Bookshop, asked Elmer Adler of Pynson Printers, “and especially the ornament by Dwiggins?” What prompted Firuski’s question was his decision to buy up the entire large paper edition of Streets in the Moon by Archibald MacLeish from the publisher Houghton Mifflin Company. [1] For the book of poetry, W.A. Dwiggins had designed the title page, a decoration used on the binding of the regular edition, the dust jacket of the regular edition, and a special publisher’s mark for the colophon. [2] “Of course, I very much liked the Dwiggins’ contribution to this book,” Adler wrote back to Firuski, “but altogether I did not think the book of a particularly high average.” [3] Firuski and Adler were keenly interested in Streets in the Moon—and Dwiggins’ contribution to it—because a few months earlier they had worked with Dwiggins on Nobodaddy, a verse play by MacLeish. They were apparently worried that their book would be upstaged by Houghton Mifflin’s. “They kept telling us all along that STREETS IN THE MOON would be far handsomer than NOBODADDY,” said Firuski, “Outside of the title page, the book was disappointing; but still, the title page at least was fine.” [4] 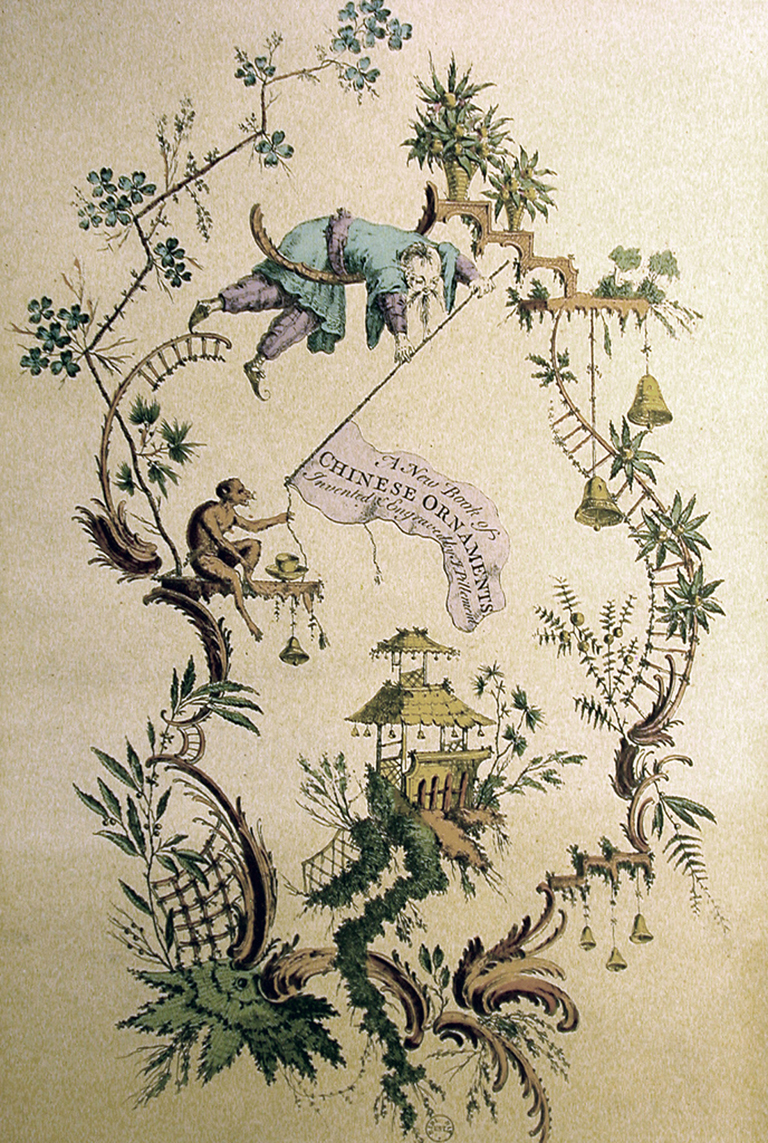 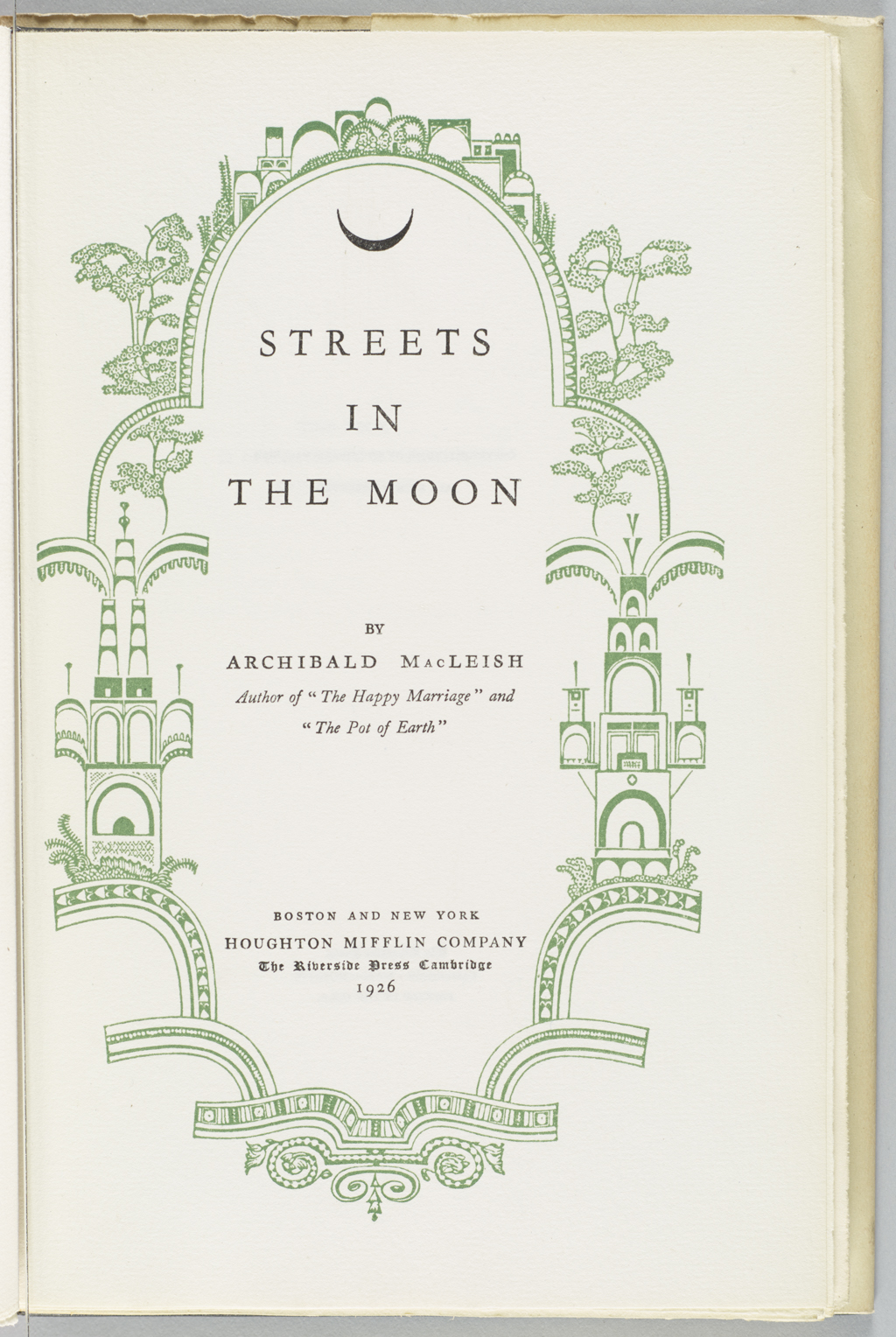 Title page of Streets in the Moon by Archibald MacLeish (Boston and New York: Houghton Mifflin Company, 1926). Decoration and typography by W.A. Dwiggins.

Was Firuski reassuring himself? Dwiggins’ title page for Streets in the Moon was more than just “fine”, it was far more innovative aesthetically than the one he had made for Nobodaddy. The latter has an illustration of Adam and Eve within a hexagon between the title/author and imprint; and one of a snake framing the entire page. The illustrations are realistic. In contrast, Dwiggins’ design for the title page of Streets in the Moon hovers between realistic and fantastic. He has built an Art Deco equivalent of one of Jean Pillement’s chinoiserie structures. [5] Dwiggins told the book designer Margaret B. Evans that the title page design was an “An experiment in an unworldly kind of ornament that I have followed up since. It was the first public thing that I did with that feeling.” [6]

How Dwiggins created the Streets in the Moon structure is not entirely clear. At first glance it looks as if it was made using his famous celluloid stencils. But none of its parts can be traced back to his known kit of stencil elements. [7] The artwork that survives appears to be principally a pen-and-ink drawing with some components—notably the “trees”—made using a few of the wooden stamps that preceded his discovery of the celluloid stencil process. The presence of white paint does not tip the argument one way or the other since Dwiggins frequently redrew and retouched his stencil designs, disguising his base elements in the process. [8] 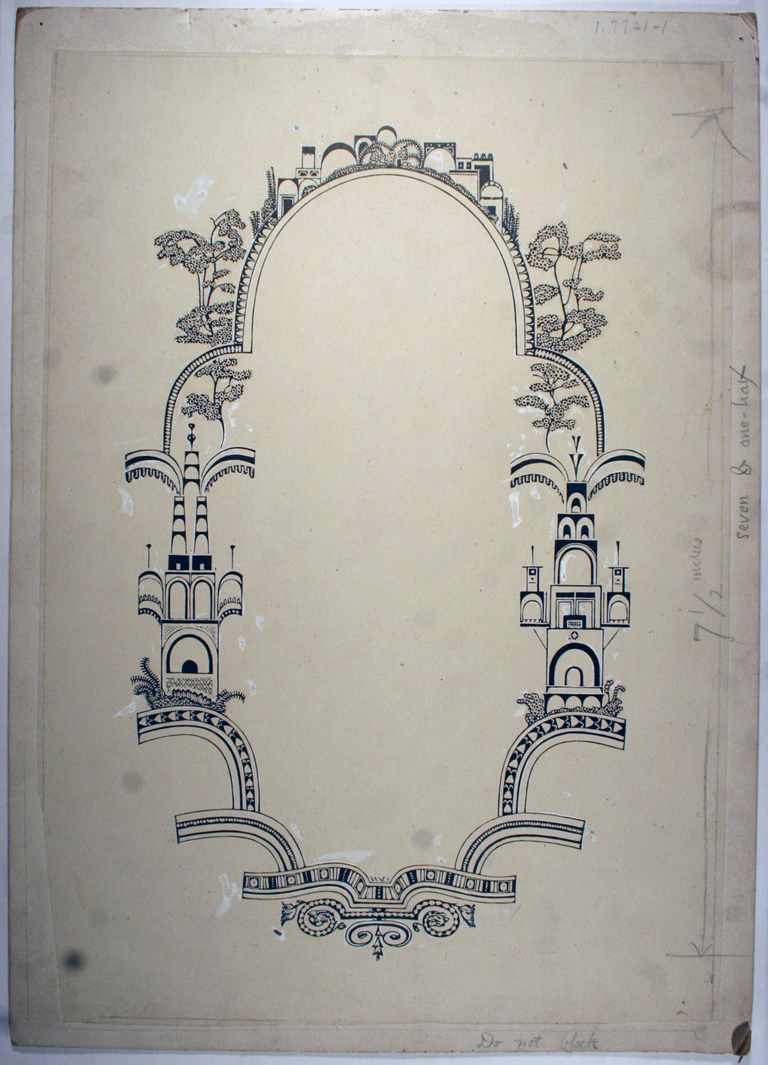 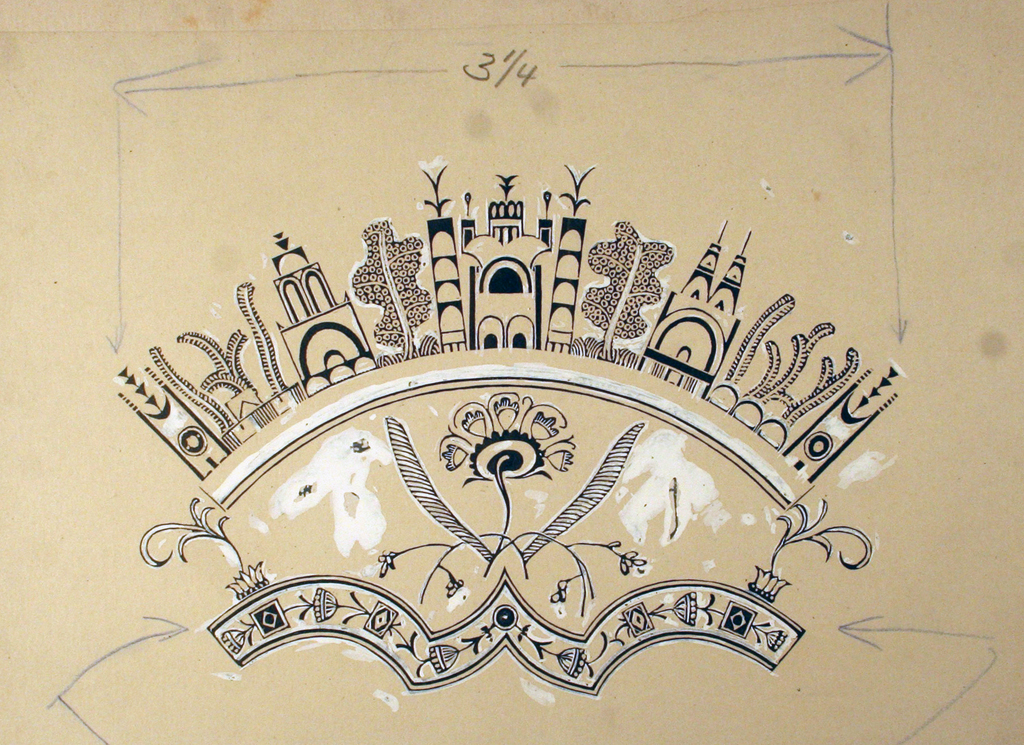 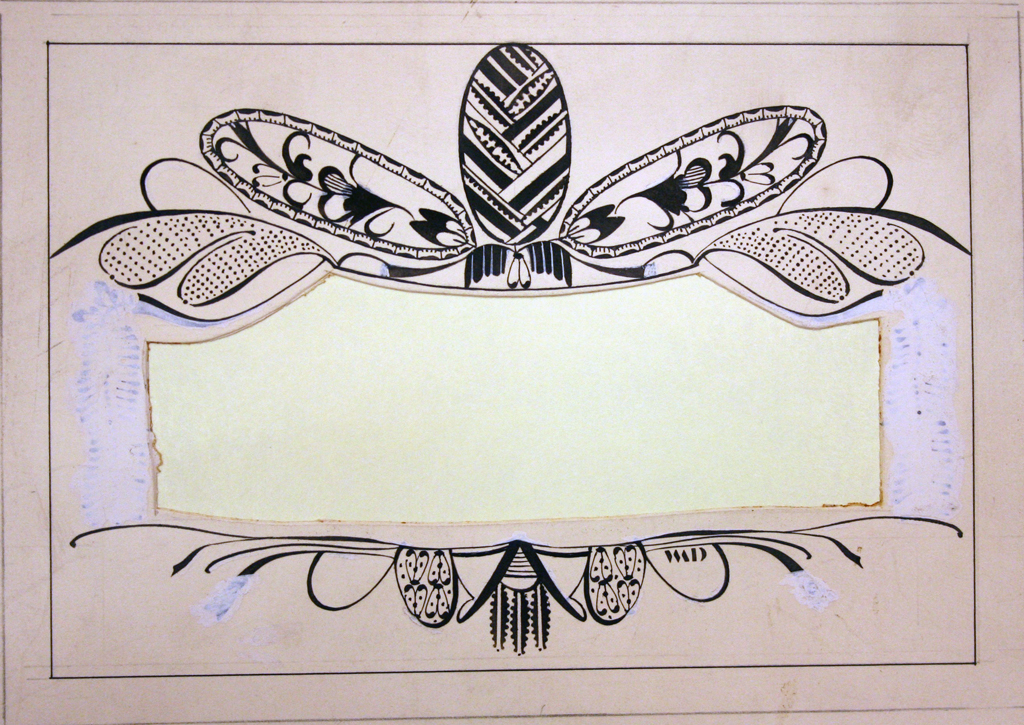 Whether the title page frame for Streets in the Moon was made using celluloid stencils or not is less important than the fact that, as Dwiggins indicated, it represented a new way of thinking about ornament. My guess is that in drawing most of the design, he came to realize that it would be easier to assemble most of it from a set of existing parts, ones very different from the wooden stamps which he had largely based on natural elements like leaves. He also wanted something more modern than fleurons, the wood and metal ornaments used by printers. [9] For the Streets in the Moon structure he needed components that were more geometric and abstract. He did not have them yet, but by 1927 he had begun building up a rich array of such material. [10]

There is no correspondence, detailed or even cursory, regarding the design of Streets in the Moon, so there is no way to know for sure what Dwiggins was thinking. [11] But it seems clear that, unlike the situation with Nobodaddy, there was no intermediary between him and the publisher overseeing the book’s aesthetics. He had free rein to indulge his imagination, surely supported by MacLeish who appreciated his work on the earlier book. [12] That autonomy was a small step toward Dwiggins’ goal of being able to design entire books, a goal that he was in the midst of reaching that year.

Notes
1. Maurice Firuski to Elmer Adler 7 November 1926 in Princeton University, Special Collections, Elmer Adler Collection (C0262), Box 323, Folder 8.
2. Streets in the Moon is item 26.04 in The Books of WAD by Dwight Agner (Baton Rouge, Louisiana: The Press of the Nightowl, 1974). Dwiggins designed the binding and title page. (The latter design, minus the publication date, was reused for the jacket.) He also contributed a special version of the Houghton Mifflin mark to the colophon and jacket spine. The interior typography (handset Oxford) is by Anselmo Bianchi, brother of John Bianchi, a partner in The Merrymount Press. The book was printed in an edition of 540 copies on handmade Little Chart paper by The Riverside Press, Houghton Mifflin’s own plant. The regular edition was bound in black cloth over boards, stamped in silver and green; the large paper edition (60 copies) was bound in a patterned paper not designed by Dwiggins.
3. Adler to Firuski 16 December 1926 in Princeton University, Special Collections, Elmer Adler Collection (C0262), Box 323, Folder 8.
4. Firuski to Adler 17 December 1926 in Princeton University, Special Collections, Elmer Adler Collection (C0262), Box 323, Folder 8. Both Nobodaddy and Streets in the Moon were chosen for the 1927 AIGA Fifty Books of the Year exhibition.
5. Jean-Baptiste Pillement (1728-1808) was an eighteenth-century French designer best known for his exotic designs with Oriental figures, buildings, and foliage. They have come to be described as chinoiserie.
6. Quoted in “On the Job” by Margaret B. Evans in Postscripts on Dwiggins vol. 2 edited by Paul A. Bennett (New York: The Typophiles, 1960), p. 163.
7. It is very possible that the individual elements, whether wooden stamps or celluloid stencils, were never recorded by Dwiggins nor deduced by Dorothy Abbe. For instance, none of the “arch” elements in the frame of Streets in the Moon are recorded by Abbe, but one seems to appear in the stencil illustration on the cover of Warren’s Olde Style—Antique Laid Watermarked brochure (c. 1932). For a selection of the wooden stamps, see Transactions of The Society of Calligraphers Bulletin No. 2 (February 3, 1925), p. 3; and for a detailed overview of the stencils see Stencilled Ornament & Illustration: A Demonstration of William Addison Dwiggins’ Method of Book Decoration and Other Uses of the Stencil… Compiled and arranged by Dorothy abbe (Hingham, Massachusetts: Püterschein-Hingham, 1979). Due to the fragility of the material, only a few celluloid stencils are preserved intact in the 1974 W.A. Dwiggins Collection at the Boston Public Library. 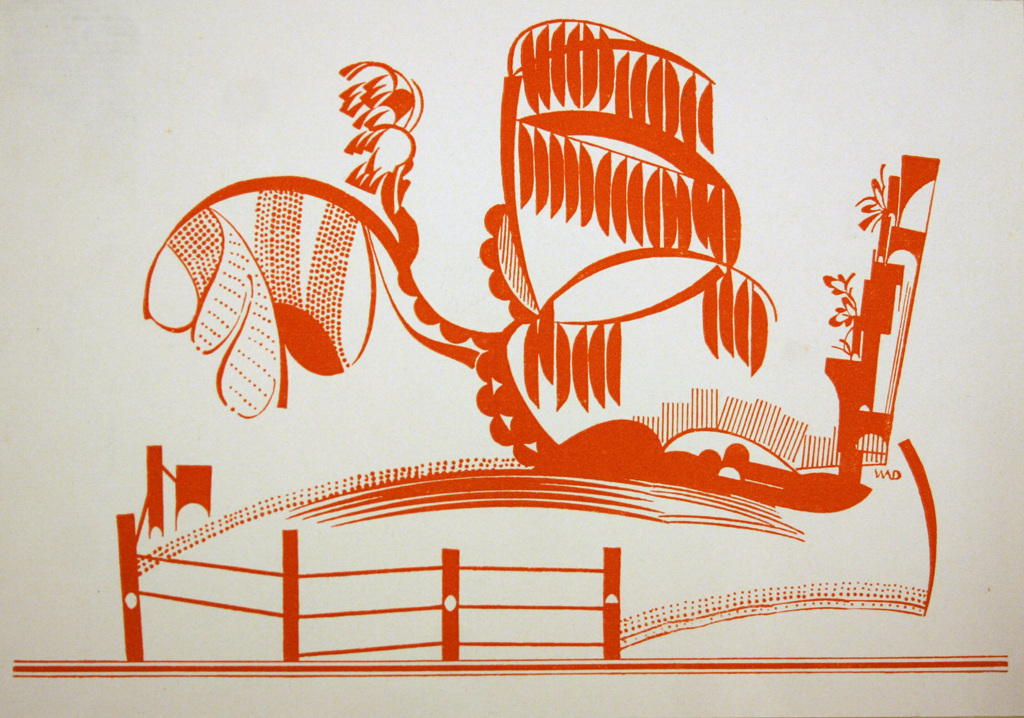 8. The pen-and-ink artwork for the title page of Streets in the Moon is in the Boston Public Library, 2001 W.A. Dwiggins Collection, Box 4, Folder 13. The folder contains a second pen-and-ink decoration that may be a rejected design for the title page. Both designs have been retouched with white paint.
9. For good examples of Dwiggins’ wooden stamps in use see the headpieces he designed for Modern Color by Carl Gordon Cutler and Stephen C. Pepper (Cambridge: Harvard University Press, 1923).
10. The first datable design by Dwiggins using geometric stencil units occurs on the cover of Attitudes vol. 3, no. 1 (July 1927), a house organ published by The Caxton Company, a Cleveland printer and advertising agency. There are additional stencil decorations inside, the most geometric of them being the headpiece on p. 3.
11. The only correspondence I was able to uncover regarding Streets in the Moon are two innocuous letters: Archibald MacLeish to Martha Hillard MacLeish, his mother, 25 July 1926  in which he declared that he considered the book his best one yet; and MacLeish to Robert Linscott in August 1926 in which he vainly tried to change the title of the book to Under the Sun—it was too late in the production cycle to do so. See, respectively, Letters of Archibald MacLeish 1907 to 1982 edited by R.H. Winnick (Boston: Houghton Mifflin Company, 1983), p. 180; and Archibald MacLeish: An American Life by Scott Donaldson with R.H. Winnick (Boston, New York and London: Houghton Mifflin Company, 1992), p. 169.
12.The only entry in Dwiggins’ account books indicated he worked for four hours on the sketch for the title page of Streets in the Moon but there is no information how much he was paid. See entry for 24 June 1926 in Boston Public Library, 1974 W.A. Dwiggins Collection, Box 81(1), Folder 6. 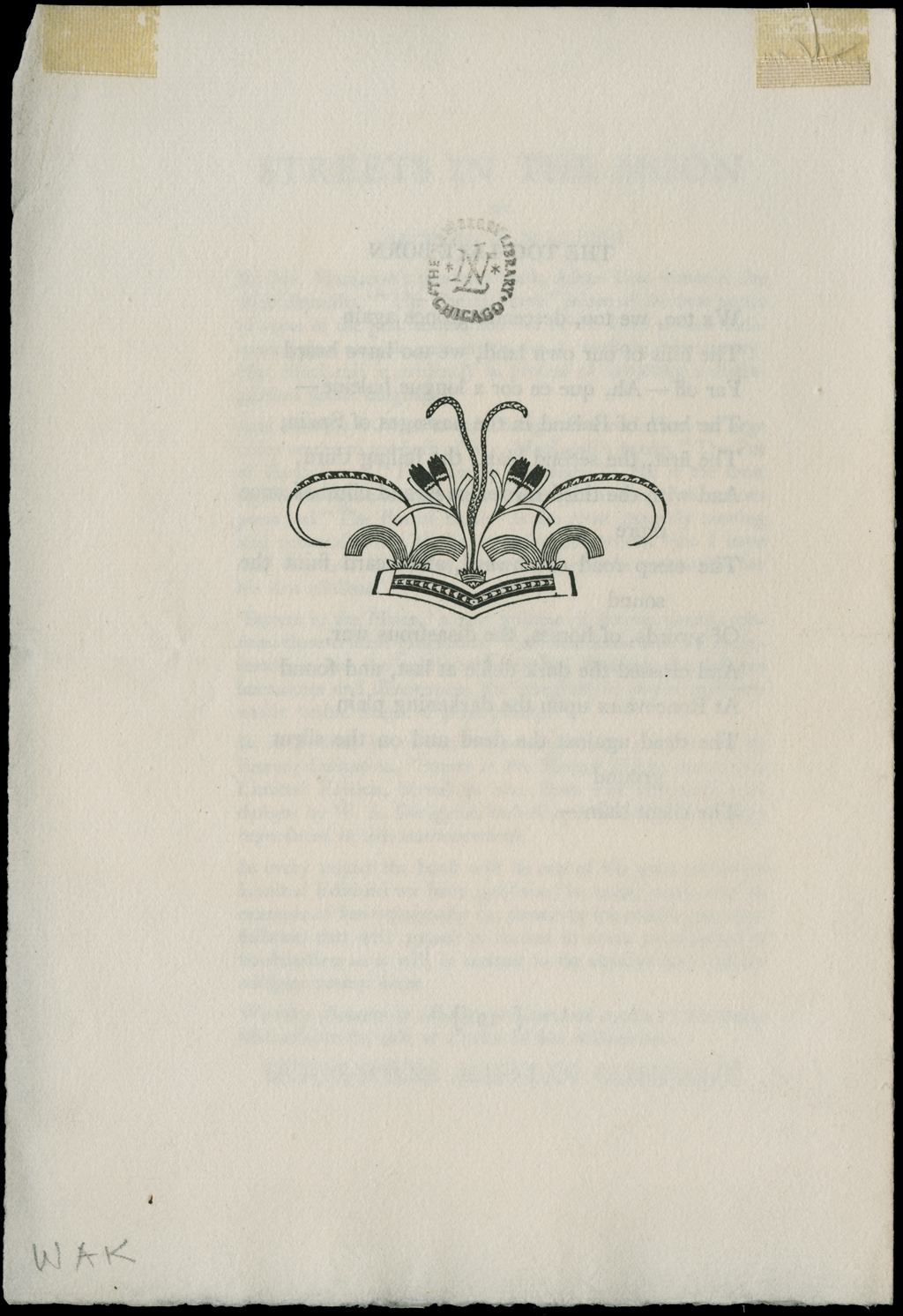 Back cover of prospectus for Streets in the Moon by Archibald MacLeish (Boston and new York: Houghton Mifflin Company, 1926). Ornament by W.A. Dwiggins. The ornament does not appear in the book. Image courtesy of The Newberry Library.