The Definitive Dwiggins no. 173—The Hound & Horn 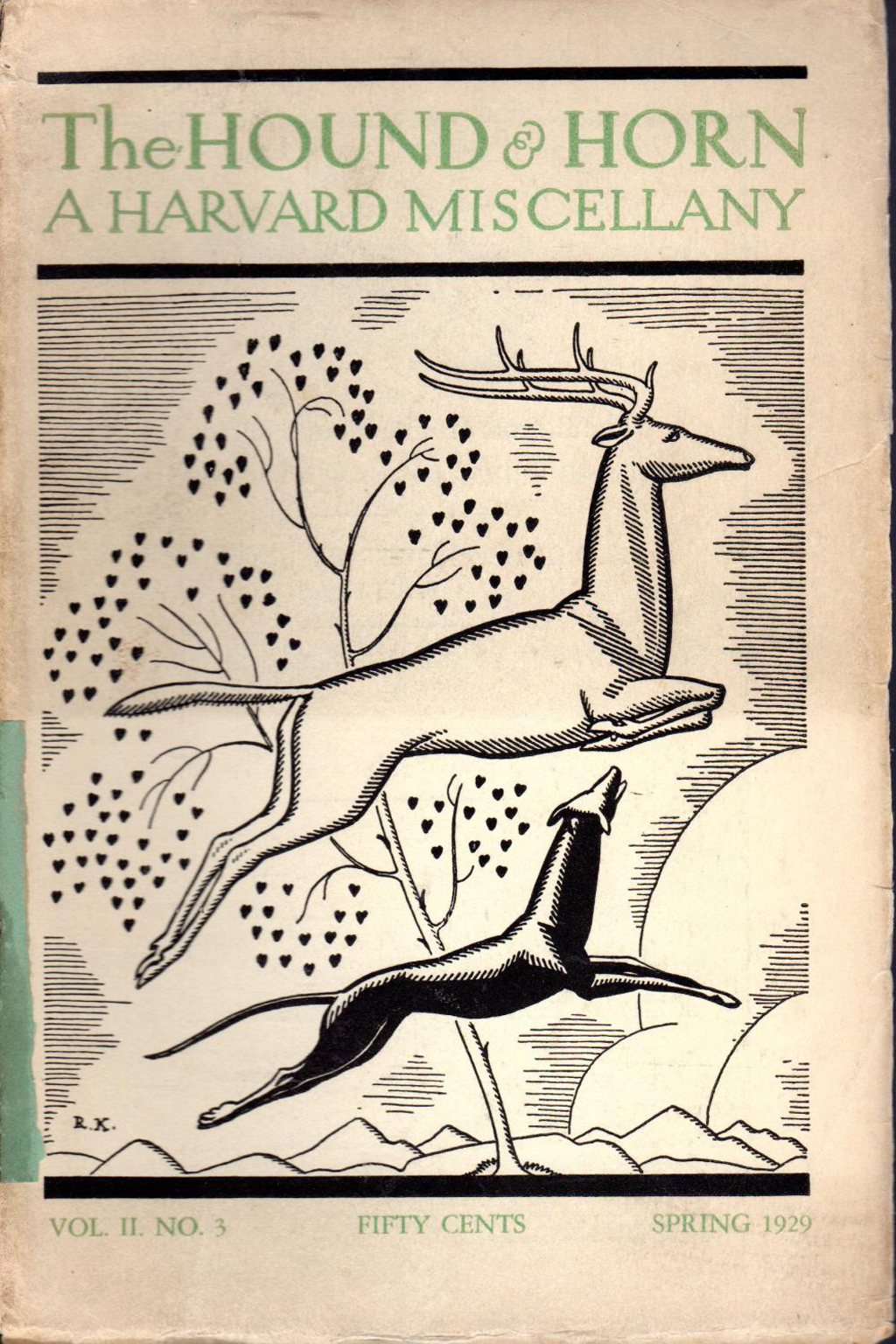 Cover of The Hound & Horn: A Harvard Miscellany (Spring 1929). Design and illustration by Rockwell kent.

The Hound & Horn: A Harvard Miscellany began life in 1927 as a literary quarterly dedicated to life at Harvard University with contributions by its students and alumni. The magazine was founded (and funded) by Lincoln Kirstein (1907–1996) and Varian Fry (1907–1967). The subtitle A Harvard Miscellany was dropped in 1929 when Kirstein prevailed over Fry in a dispute over whether or not to broaden the magazine’s focus and contributors beyond Harvard. Fry left the magazine and in 1930 Kirstein, having graduated the summer before, moved it to New York City from Cambridge. It was at this moment of transition that W.A. Dwiggins was asked to redesign the magazine.

The masthead and cover design of The Hound & Horn: A Harvard Miscellany was by Rockwell Kent. It depicted a stag being hunted by a hound, a literal interpretation of the Ezra Pound poem “The White Stag” which had given the magazine its name —”Tis the white stag, Fame, we’re a hunting, bid the world’s hounds come to horn.” [1] Dwiggins’ design of the magazine cover dispensed with the full-size illustration, replacing it with strap lines listing each issue’s contents set in ATF Bodoni. A mark by Kent, showing a hound leaping through the coils of a hunting horn and over the initials “H & H”, was the only imagery. The nameplate was hand-lettered by Dwiggins as was the date and price. The mark, date and price changed color with each issue while the nameplate and contents remained in black. [2] 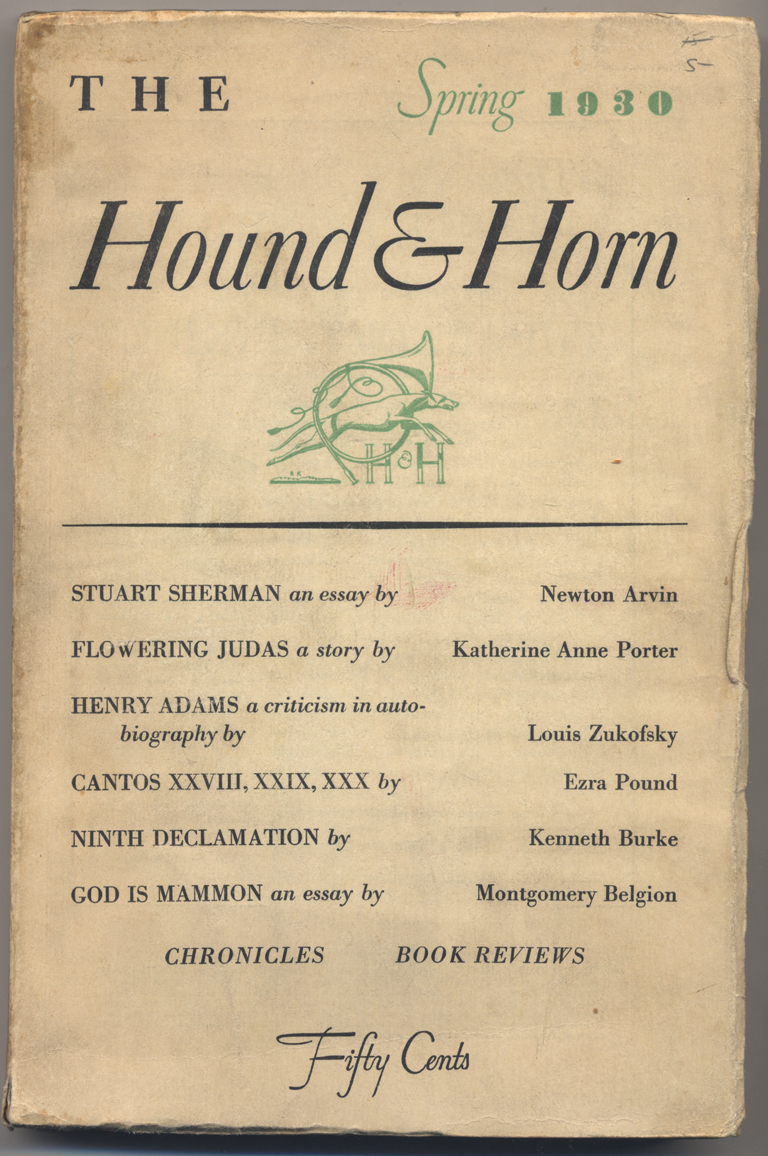 Cover of The Hound & Horn (Spring 1930). Design and lettering by W.A. Dwiggins; mark by Rockwell Kent. 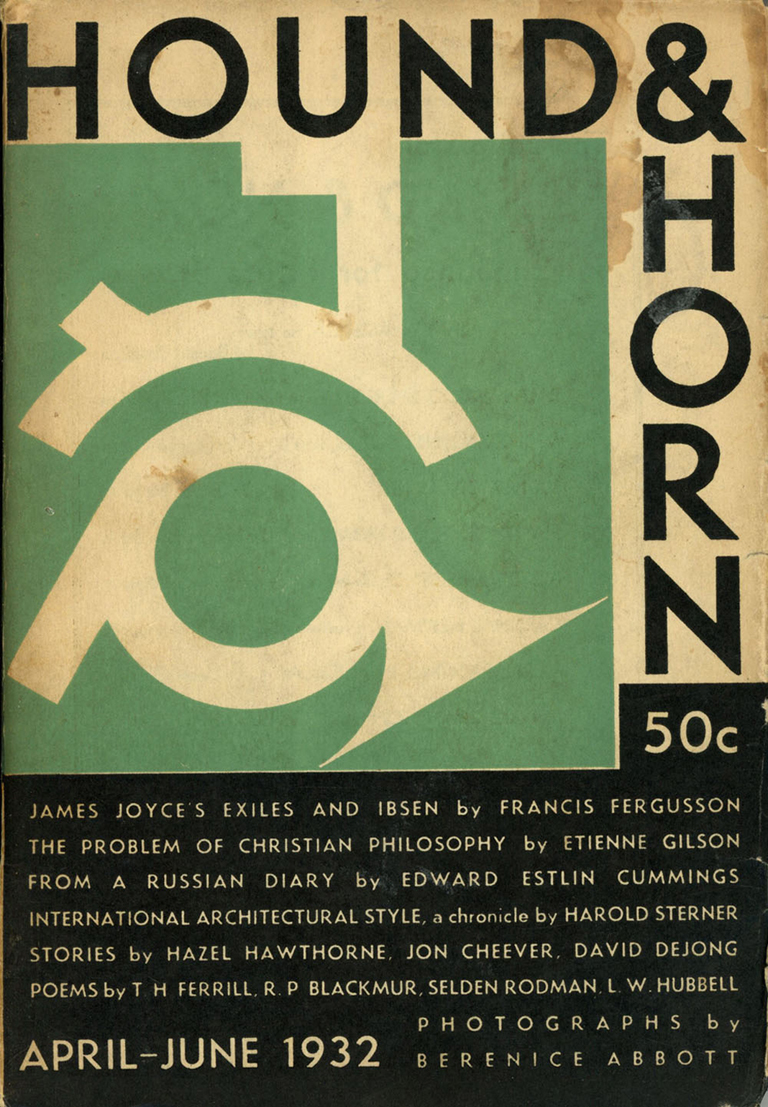 Dwiggins’ design included four abstract geometric stencil ornaments used as tailpieces. His version of The Hound & Horn lasted for thirteen issues, from the fall of 1929 to the winter of 1931, before being replaced by a radically more modern one. (The name was also truncated to Hound & Horn.) [3] The magazine ceased publication in 1934.

There are several possible explanations for how Kirstein came to hire Dwiggins to revise the cover and nameplate of The Hound & Horn. Kirstein himself never explained how the two men met., though he did say years later, “Rockwell Kent, whom I then admired as a latter-day William Blake, made decorations for us at what he called ‘children’s prices’; later, W.A. Dwiggins drew some printers’ ‘flowers,’ which I thought very pretty and other editors thought very silly.” [4] The first possibility is that he saw Dwiggins’ work in the spring and fall of 1929 for Clothes, a quarterly “shopping guide” published by Wm. Filene’s Sons Company, the Boston department store. [5] His father, Louis E. Kirstein (1867–1942), who had bankrolled The Hound & Horn from its inception, was the chairman of the store at that time. The second is that Philip Hofer (1898–1984) put the two men in touch. Hofer was a Dwiggins collector while a graduate student at Harvard. He was a partner with George Parker Winship (assistant librarian in charge of Harvard’s collection of rare books and manuscripts) in The Cygnet Press which had been established in 1928. Dwiggins designed the Press’ mark. Winship was an advisor to The Hound & Horn and Hofer contributed an article (“Notes on Printing: Modern Book Illustrating” to the April–June 1929 issue). Hofer was also a trustee of The Harvard Society of Contemporary Art, Inc. which Kirstein, with Edward M.M. Warburg and John Walker III, founded in 1929 as a gallery devoted to showing avant-garde art. [6] A third explanation is that Kirstein discovered the designer through Dwiggins: A Characterization of the Designer of the Mark of the Cygnet Press by Paul Hollister (Cambridge: The Cygnet Press, 1929). [7] Or he may simply have been aware of Dwiggins due to the many visible projects the designer did in 1928, ranging from his own books Layout in Advertising and Paraphs to those he made for Crosby Gaige, The Merrymount Press, and The Printing House of William Edwin Rudge. Most likely there is no single explanation. All of these influences probably coalesced between spring and summer of 1929 and impelled Kirstein to, at least partially, throw over Kent for Dwiggins.

There is very little in the way of correspondence between Dwiggins and Kirstein to elucidate their relationship. The sole surviving letter is from Dwiggins to Kirstein dated January 4, 1930, sent after The Hound & Horn had been given its new livery. There is no discussion of the design. “I like to see H & H interested in the way literature is presented, as well as in literature,” Dwiggins writes. “I couldn’t go with Hitchcock in his liking for Didot because I like the English lay letter—Bulmer, e.g.—but that’s all personal stuff I imagine.” [8] The reference is apparently to “The Decline of Architecture” by Henry-Russell Hitchcock, Jr., the article that marked his debut as an architectural critic. [9]

The cover design that Dwiggins fashioned for The Hound & Horn is not particularly notable. The title is awkwardly split up with “THE” floating unmoored at the upper left. Despite claiming that he preferred Bulmer to Didot, Dwiggins’ lettering of “Hound & Horn” is more in the French manner than the English. It goes well with the Bodoni for the contents—though there is no harmony with the interior typography. Kent’s mark seems cluttered with an unnecessary bit of landscape at the lower left and the redundant “H&H” at the right. The design that replaces Dwiggins’ at the beginning of 1932 is much more powerful. [10] 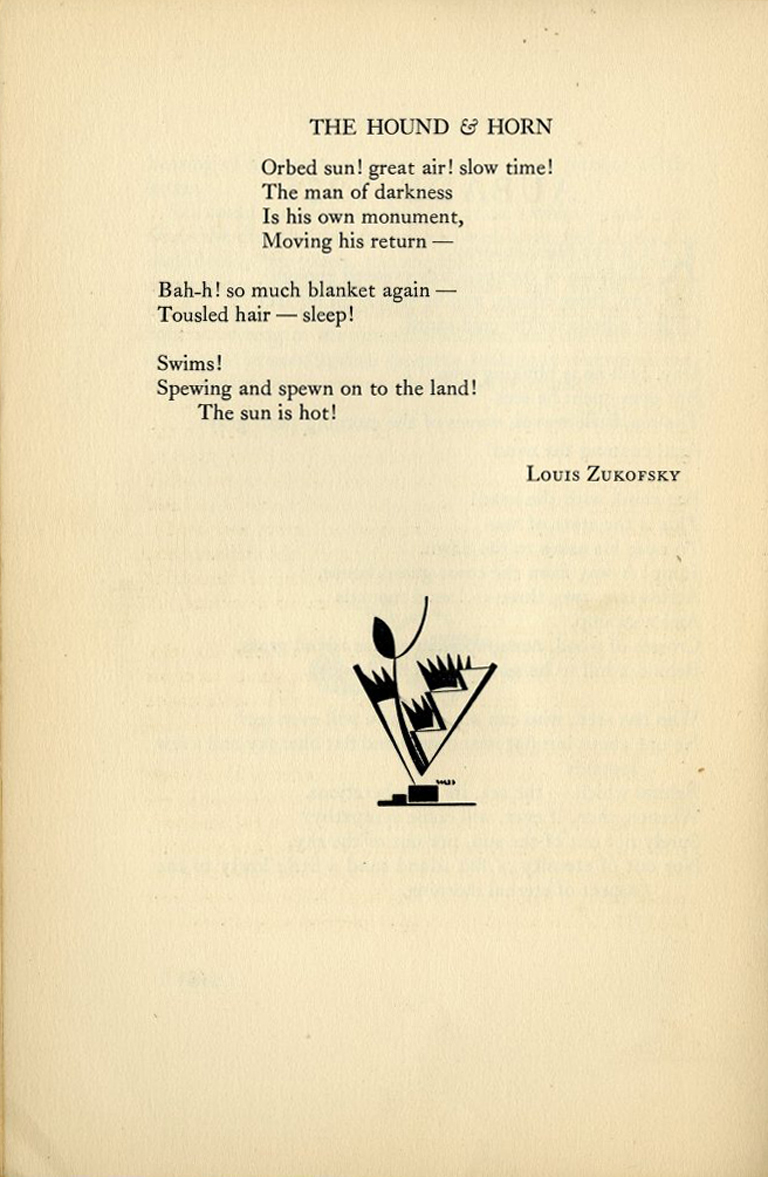 Page from The Hound & Horn with tailpiece ornament by W.A. Dwiggins; the typeface is Caslon.

It is the four stenciled tailpieces that Dwiggins created for The Hound & Horn, replacing ones that kent had designed, that are the most interesting aspect of his work for the magazine. They gave the publication a more “moderne” or Art Deco look, in keeping with its roster of modern writers and artists (among them James Joyce, Ezra Pound, Wallace Stevens, Eugene O’Neill, Herbert Read, Picasso, and Charles Sheeler); though they were at odds with the Caslon type. The stencils are part of a larger group of abstract, primarily geometric, ornaments that Dwiggins had been working on since sometime in 1927. This group includes the cover of Attitudes (July 1927), two designs for Veni Creator!, ten for Good Morning, America by Carl Sandburg, thirty for a box of S.D. Warren & Co. paper samples, two for the Fall 1929 issue of Clothes, two for the catalogue of The Architect and the Industrial Arts exhibition, and the binding of 22 Printers’ Marks and Seals (1929). [11]

Beatrice Warde was one of the first to notice Dwiggins’ innovative stencil designs, including those done for The Hound & Horn. In Penrose’s Annual for 1929, she wrote:

Considerable attention has been aroused of late in American publishing circles by the experiments of Mr. W.A. Dwiggins, in the use of stencil for the decoration of books. Mr. Dwiggins cuts patterns with a scalpel on thin celluloid, and arranges them much as type ornaments would be arranged, but of course with a greatly increased flexibility, as he is not bound to the foursquare rigidity of the printer’s flower. A line block is made of the assembled whole. The units he employs are startlingly modernistic. Mr. Dwiggins has also experimented in the use of flat colour, both for the paper companies (whose policy of issuing magnificent specimens cannot be too highly commended), and for printed books such as Milton Waldman’s America conquers death, as recently issued by W.E. Rudge of New York. The “pochoir” process, as it is called in France, allows, of course, of a peculiar intensity of colour, but this can be fairly imitated on zinc or lino and with pigments which are less fugitive than those of water-colour. [12]

Here are the four stenciled tailpieces in the order on which they appeared in The Hound & Horn. [13] 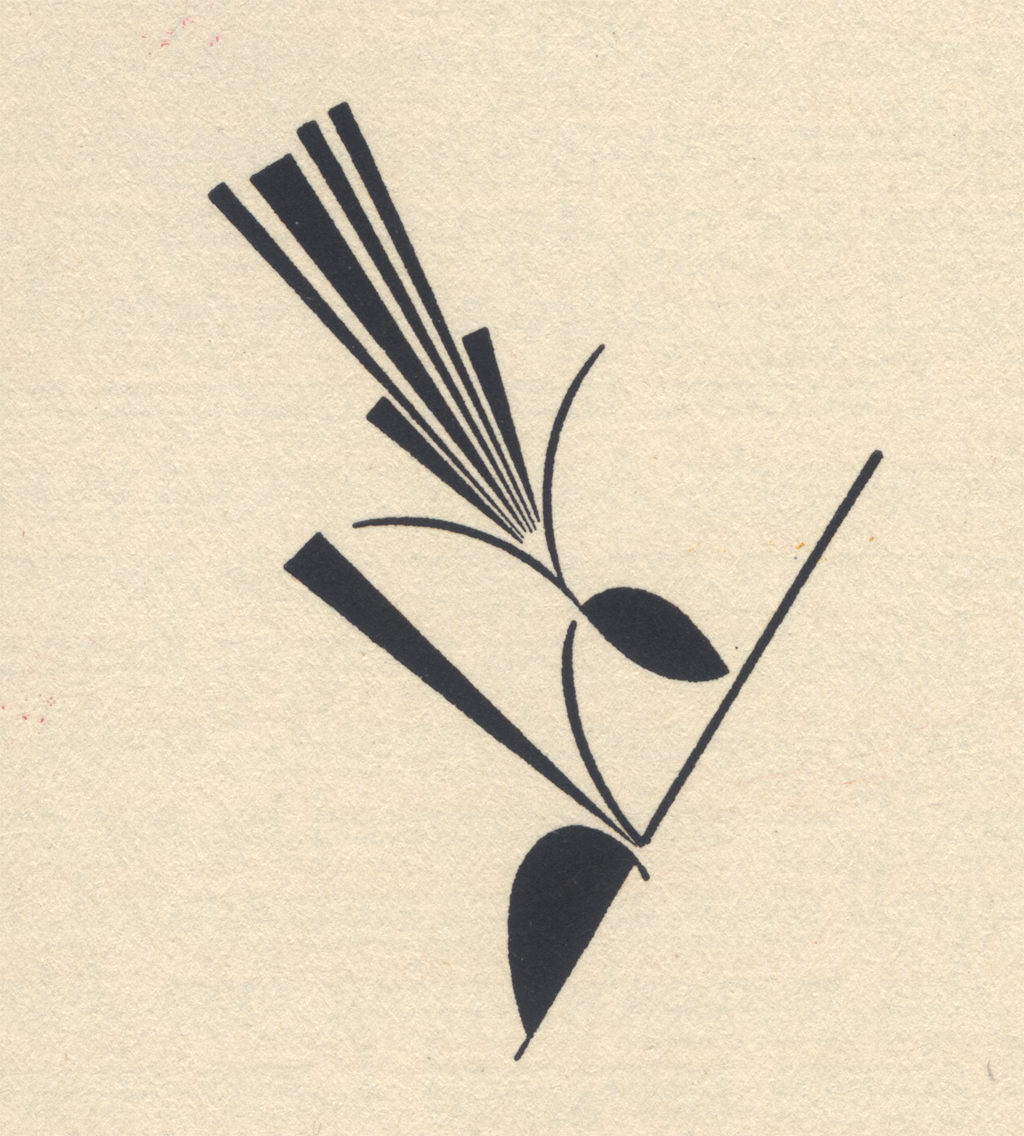 Ornament 1 from The Hound & Horn. Design by W.A. Dwiggins. 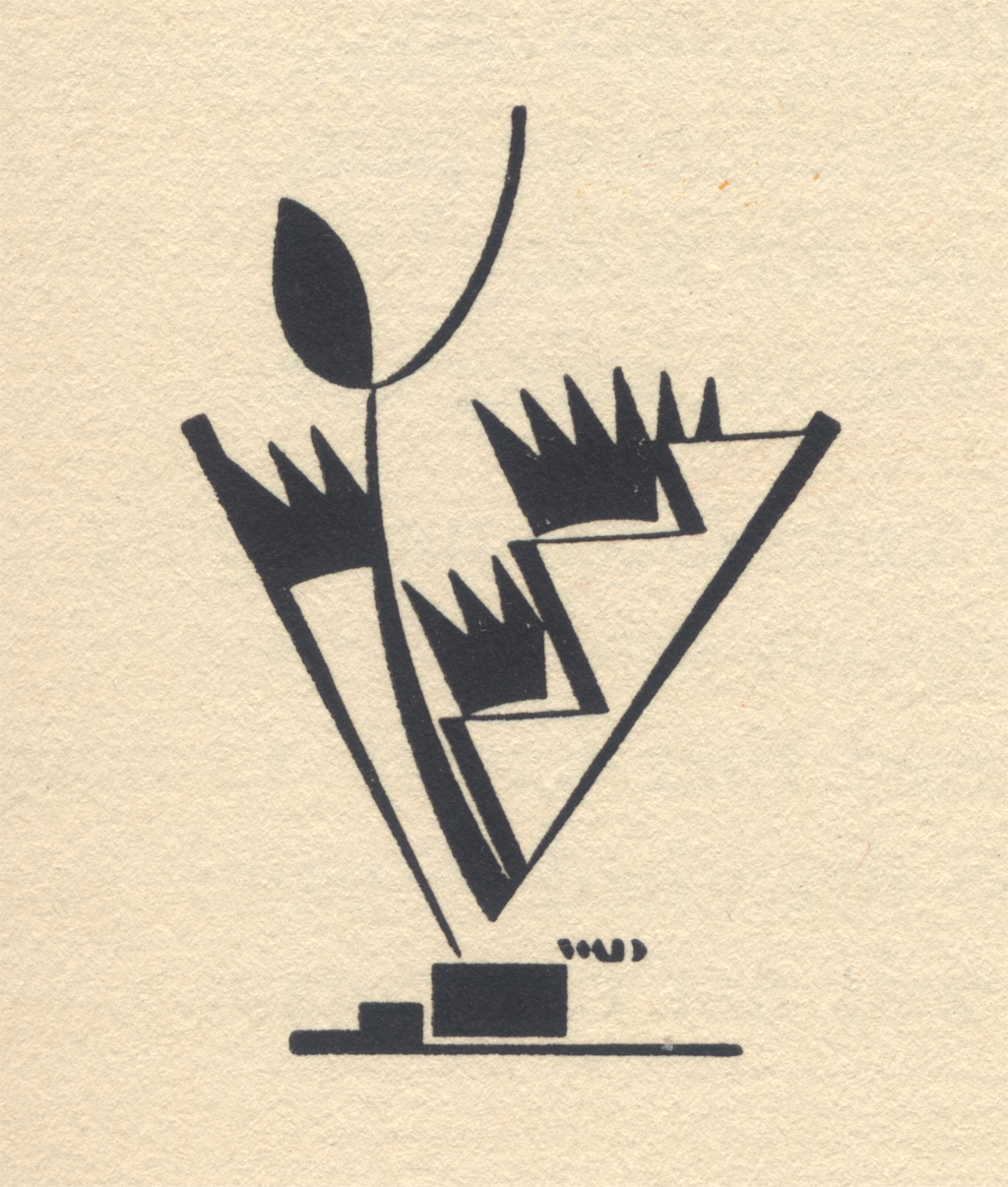 Ornament 2 from The Hound & Horn. Design by W.A. Dwigigns, 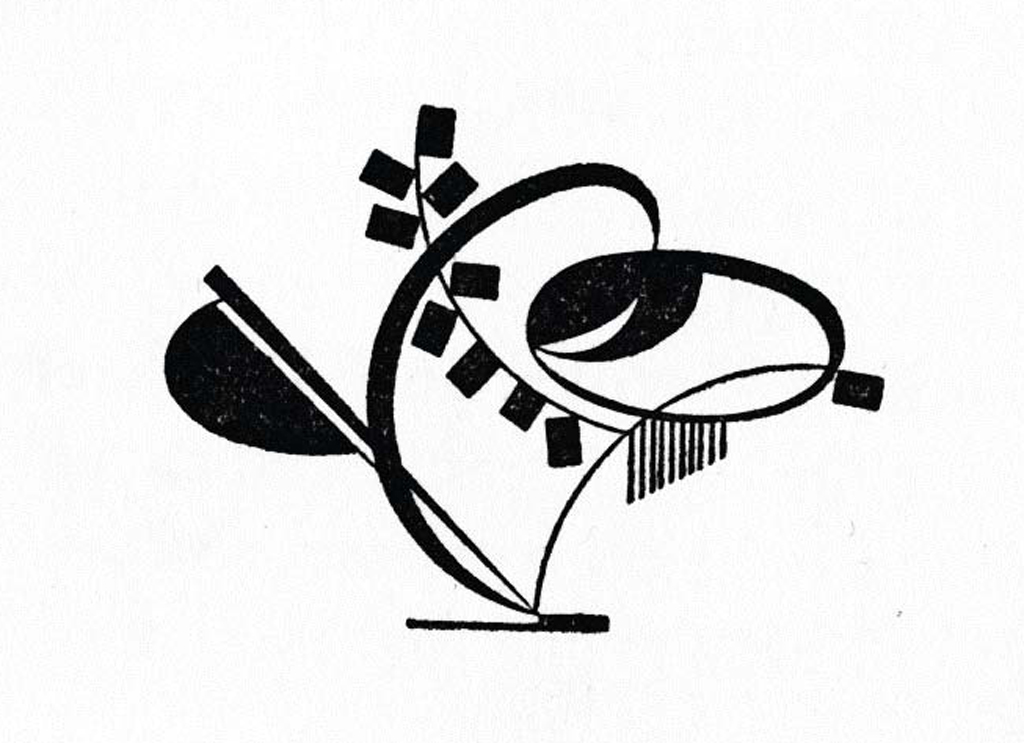 Ornament 3 from The Hound & Horn. Design by W.A. Dwiggins. 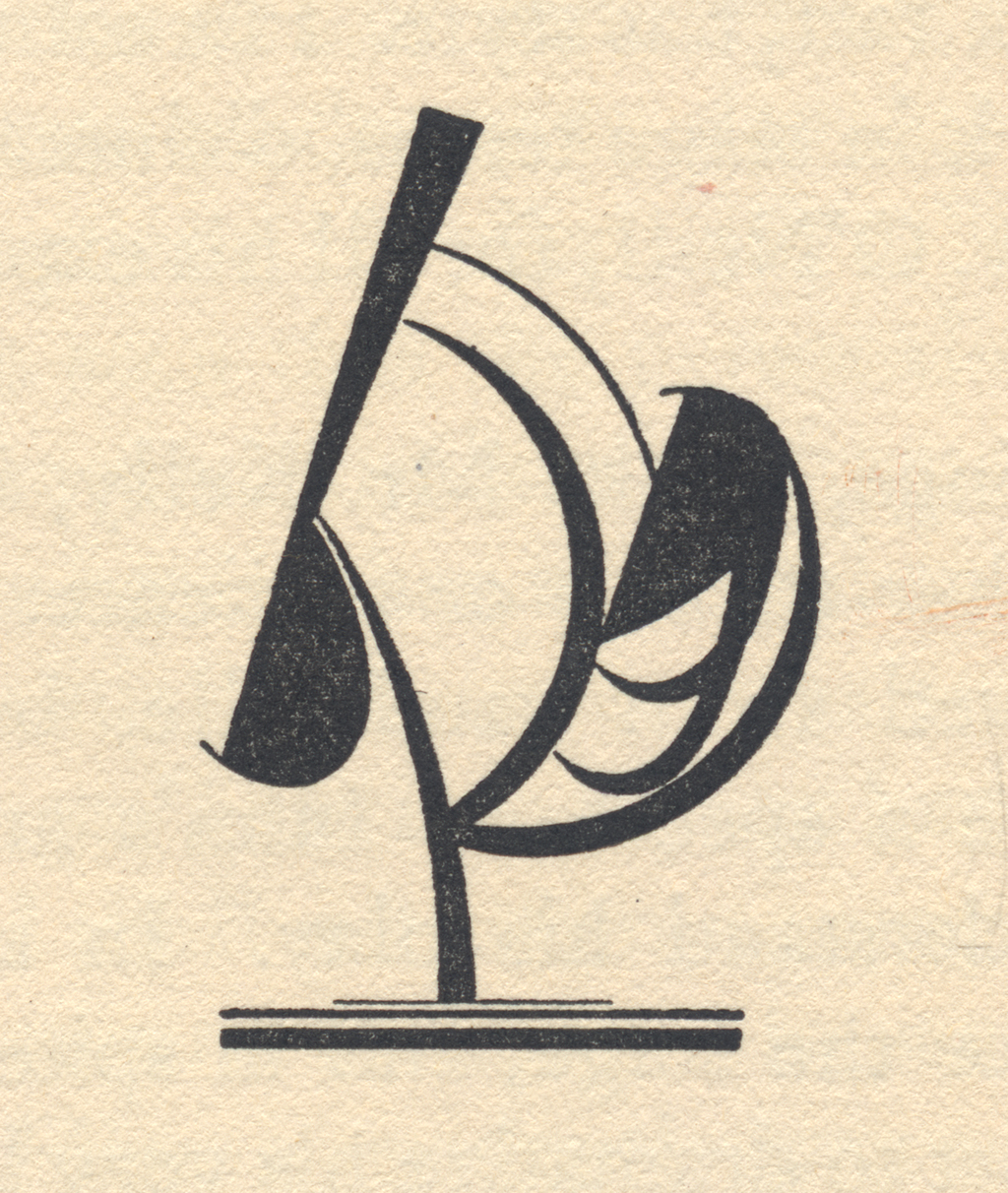 Ornament 4 from The Hound & Horn. Design by W.A. Dwiggins.