The Definitive Dwiggins no. 113—The Marchbanks Calendar

The Definitive Dwiggins no. 221—More on the 1925 Marchbanks calendar

In 1928 the Niagara Paper Mill Co., located in Lockport, New York, issued a set of calendar sheets with illustrations by W.A. Dwiggins. In design, though not in color, the illustrations were identical to the ones that Dwiggins had created for The Marchbanks Press three years earlier. [1] 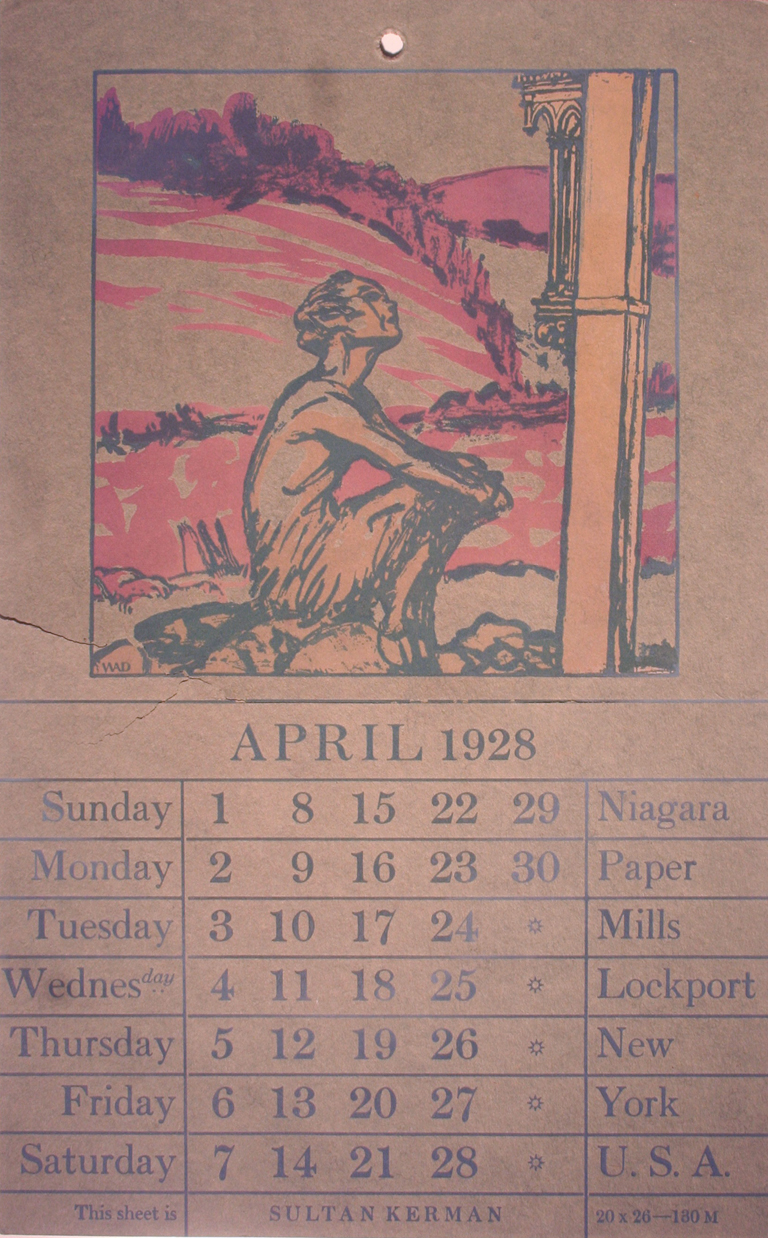 How did the calendar sheets come about? They are not recorded in Dwiggins’ account books and I doubt that he had any hand in them. Although The Marchbanks Press had printed sample books for Niagara Paper Mills as recently as 1922, it is very unlikely that Hal Marchbanks would have approved such mediocre typography. [2] If the paper company did not get the illustrations from Dwiggins or The Marchbanks Press, they must have simply copied them from the 1925 Marchbanks calendar slips.

That theory would explain much of the peculiarity of the Niagara Paper Mills calendar sheets. Dwiggins’ illustrations and the calendar typography are in conflict with one another. The latter is wider than the pictures with rules that bleed off the left and right sides. The company’s name is set vertically at right of the calendar dates to balance the days of the week on the left.

All of the sheets are printed in two colors with half of them in gradations (March, May, June, July, August, and September) that include both the type and the illustrations. Niagara Paper Mills’ paper stocks are all dull colors, with the exception of Sultan Persian Orange. [3] The paper and ink combinations do a serious injustice to Dwiggins’ illustrations. At best, they appear garish and, at worst, they are difficult to properly see (e.g. November). [4] 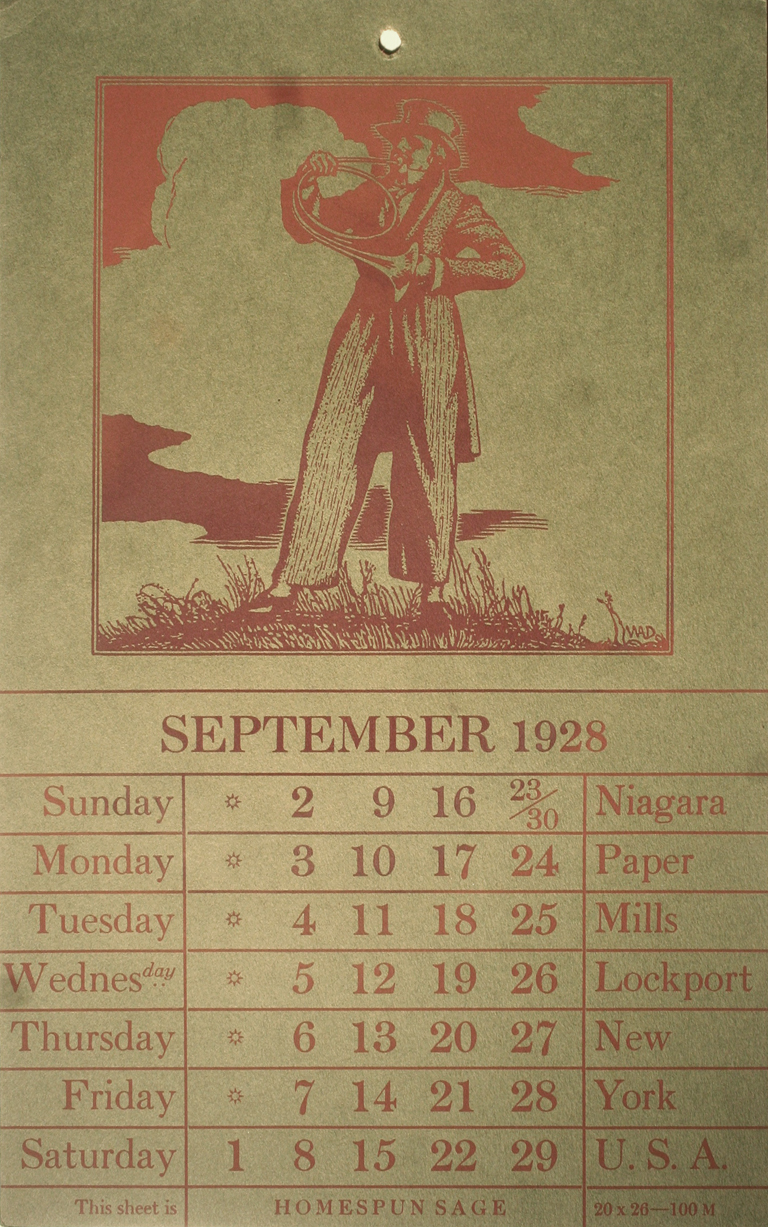 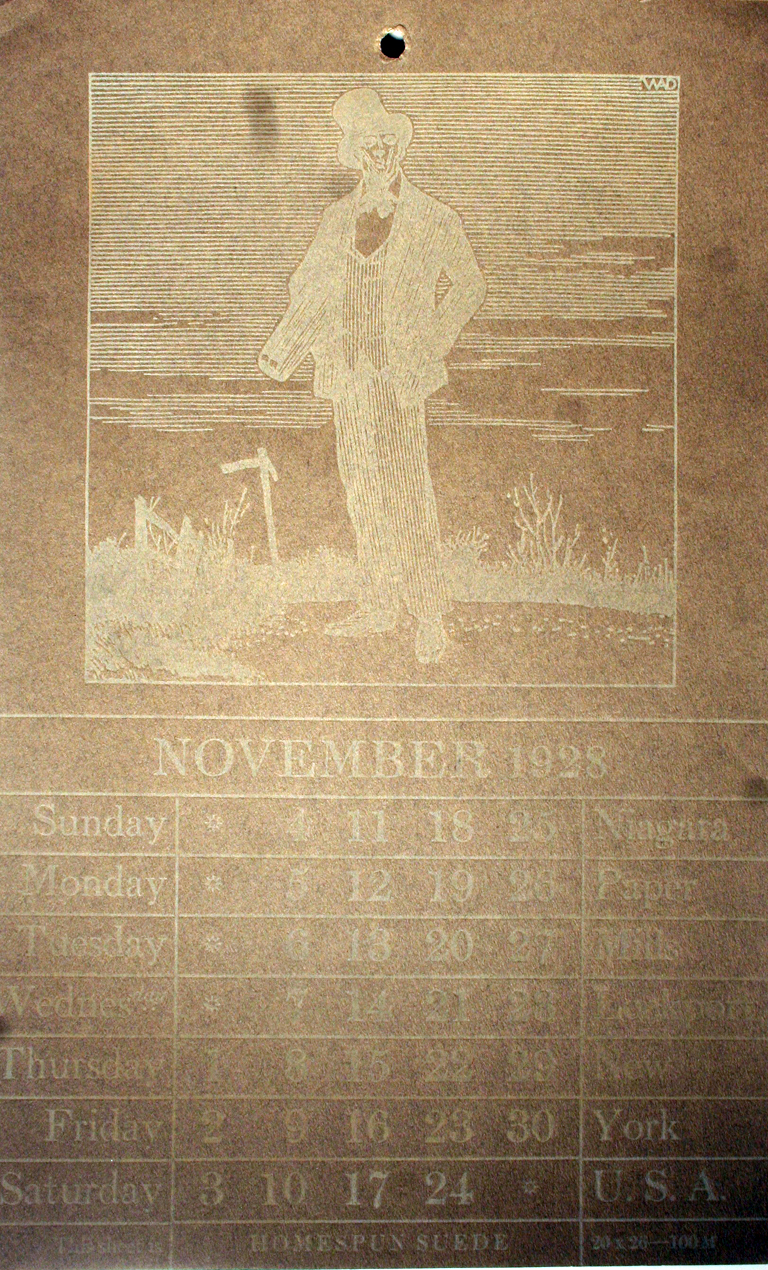 Notes
1. For more on the 1925 Marchbanks calendar see The Definitive Dwiggins no. 113.
2. Marchbanks owned a print shop in Lockport from 1902 until 1904 or 1905. He was noted for his superb typography and especially for his passion for Caslon Old Style No. 471. The Niagara Paper Mills calendar sheets are set in Scotch Roman.
3. The ink colors and paper stocks are as follows:

An imperfect but complete set of Niagara Paper Mills calendar sheets is at the Boston Public Library, 1974 W.A. Dwigggins Collection, Box 72, Folders 2-13. There is also another version of Dwiggins’ July drummer printed in yellow on greenish-gray Ganges stock titled “Tom-Tomming Sultan Cover” at The Newberry Library, William A. Kittredge Papers, Box 15, Folder 396.
4. My photographs of the calendar sheets in both collections are not entirely accurate in respect to color. I have done my best in Photoshop to correct their shortcomings.