The Definitive Dwiggins no. 190 addendum 2—Even more on Henry King Hannah

In the addendum of The Definitive Dwiggins no. 169—”Der Professorverein” I identified a photograph in the John Francis Holme Collection at the University of Arizona as having been connected to the Second Saturday Evening Saturnalia of Der Professorverein of the Frank Holme School of Illustration at The Monroe restaurant on October 27, 1900. [1] I was wrong. I recently came across another copy of the photograph in a scrapbook prepared by members of the Palette & Chisel Club in Chicago. All but three of the individuals are identified (last names only) as members of the Club. Thus, the photograph—contrary to my claim—is not a record of “Der Professorverein”. 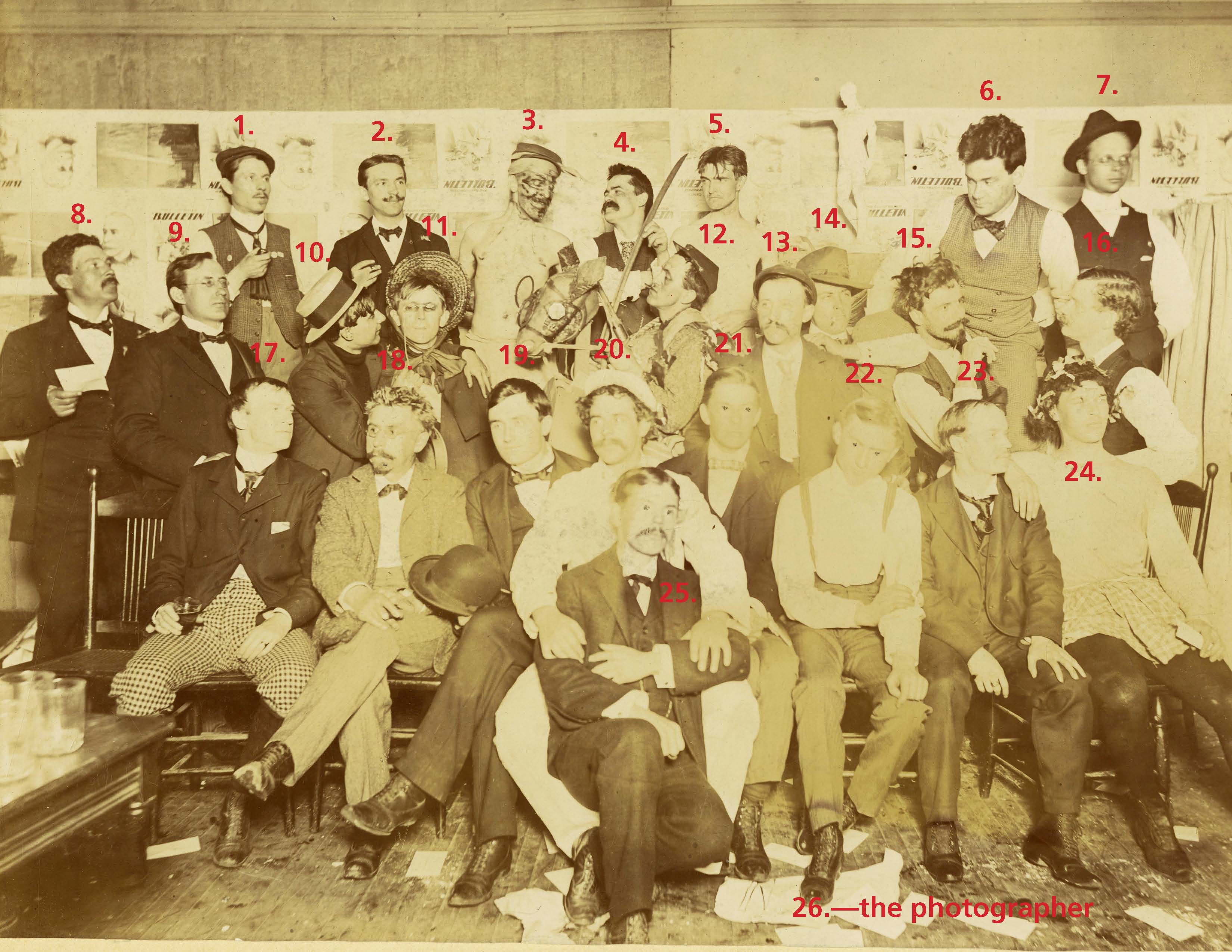 Photograph of members of the Palette & Chisel Club (1898). Image courtesy of the University of Arizona Special Collections Library.

I think the unknown individual in the back (3) is Jean Beauley (1874–1941) and that the unknown individual sitting (19) is Lawrence Mazzanovich (1871–1959). The unknown man (9) standing at the left resembles Curtis Gandy except that in an 1897 photograph of him in The Inland Printer he has a mustache and Van Dyke beard. Or he may be Henning Berger (1872–1924) since Berger took part in Cuba Libre Night (see below). [4] The only individuals who had a connection to the Frank Holme School of Illustration are, besides Holme himself, Mulhaupt, Cameron, Beauley, and Mazzanovich. [5]

The photograph is not dated in the scrapbook, other than appearing on a page headed 1898. But it was probably taken in May or early June. In the scrapbook it follows a program for Cuba Libre Night and newspaper clippings about the event which occurred on June 4, 1898. The event, also referred to as a “smoker”, was held in the Club’s quarters (Room 734) in the Athenaeum Building, down the hall from the premises of the School of Illustration. [6] It was the Club’s last event of the season. In the photograph the walls of the room are plastered with copies of the first (and last) issue of The Illustrated Bulletin, a magazine that Holme published in May 1898. The Bulletin was devoted to depictions of the Spanish-American War. [7]

The war was the subject of the “Cuba Libre smoker”. This is the full text of the program:

Order of the Night
1—General Miles.
2—Rough Rider Roosevelt.
3—The Board of Strategy.
4—Commodore Schley.
5—The Bombardment of Santiago,
introducing real water
(Only appearance this evening!)
6—The Army of Invasion.
7—The Victorious Volunteer.
8—The King of Spain hears the news from Santiago.
9—The War Correspondent.
10—People who profit by the war.
11—General Gomez.
12—Phillippine [sic] Islander.
With characteristic native dances.
13—Camel riders.
14—Return of Gomez
15—Admiral Sampson and the Sea-Serpent
With songs and electric fountain.
16—Admiral Dewey.
The program will be delayed by WAR MUSIC—rendered by a full mlitary musician. Sketches will be dashed off on the spot by a carefully selected corps of artists. [8]

The Chicago Tribune described the night as a combination of “living and shadowgraph pictures. General Miles was personified by Frank Holme, Theodore Roosevelt by Richard Boehm, Commodore Schley by Carl Mauch, Frederick Muhlhaupt portrayed General Gomez on horseback, and, as everyone taking part wished to represent Admiral Dewey, each member of the company attempted to give his own impression of the hero of Manila Bay. Henry Hutt, with balloons, carrier pigeons, and other accessories, was the war correspondent.” Boehm also played “the Philippine Islander in a Hula Hula Dance”; Hunter and Henning Berger acted out “Sampson and the Sea -Serpent”; and August Swanson was “The Volunteer (Salvation Army)”. [9]

Perhaps the photograph was taken before or after the “Cuba Libre” performance. In it Boehm can be seen in what might be a “hula” skirt, Holme is riding a hobby-horse, and Swanson wears a bonnet suggestive of a Salvation Army worker. However, the appearance of the unidentified man in the back row—with naked torso, painted face, and head wrap—is hard to explain in terms of the program. And no one else is in costume.

Notes
1. University of Arizona, John Francis Holme Collection (MS1), Box 1, Folder 5.
2. Scrapbook no. 1—1895-1906 is in The Palette and Chisel Club Records 1895–1976, The Newberry Library.
3. I have added the first names of each individual based on information elsewhere in the scrapbook and online. Swanson committed suicide on February 13, 1899  “…by shooting himself in a place which he selected in his head after careful study of a skull…”. A memorial page is dedicated to him in Scrapbook no. 1 of The Palette & Chisel Club. He is described as an art student, possibly at the School of Illustration.
4. See The Inland Printer vol.  XX, no. 2 (November 1897), p. 190. Berger also has a mustache and beard in the photograph online.
5. For thumbnail biographies of each see The Definitive Dwiggins no. 169.
6. The Palette & Chisel Club, now known as The Palette and Chisel Academy of Fine Arts, did not move to their present location at 1012 North Dearborn Street until 1921.
7. “…I regret to say that the Illustrated Bulletin is no more. The first number was got up simply as an experiment and although it caught on very well we have decided for business reasons to drop it. I got some good experience out of it and may start something else on similar lines before long.” Frank Holme to Vause Marshall 28 May 1898 in West Virginia University, Frank Holme Papers, Folder 1. One copy of the Bulletin survives at the Arizona Historical Society, Frank Holme Collection, Box 1, Folder 5.
8. The Newberry Library, The Palette and Chisel Club Records, Scrapbook no. 1. The people referred to are:  General Nelson A. Miles (1839-1925), Assistant Secretary of the Navy Theodore Roosevelt (1858–1919, Commodore Winfield S. Schley (1839–1911), General Máximo Gómez y Baez (1836–1905), Admiral William T. Sampson (1840–1902), and Admiral George Dewey (1837–1917).
9. The Chicago Tribune 5 June 1898.