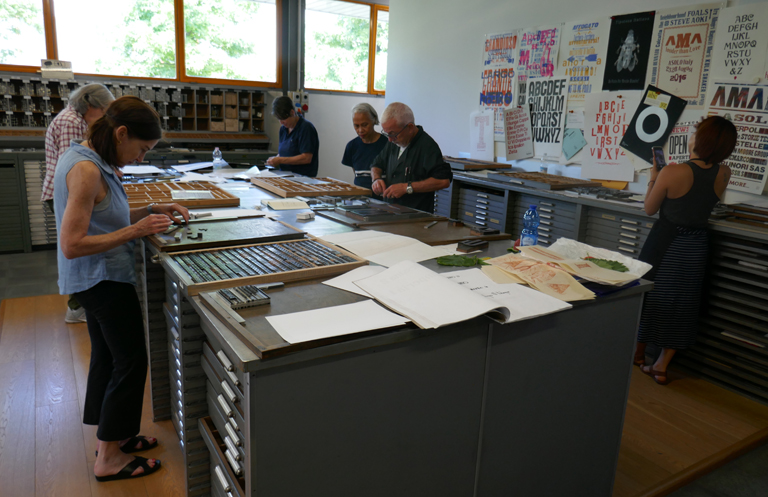 Legacy of Letters participants hard at work setting type at the Tipoteca.

Work on the menu project began to speed up on Wednesday as the participants finished up their text type requirement and moved on to the interpretive part of the assignment. The approaches they took were gratifyingly varied. James, Jason, Laura, Lucia and Lucille simply played with typographic forms and color; Shaina and Claire opted for typographic “pictures”; Janine and Emmy incorporated pressure prints into their designs; and Jane experimented with stencils. Later, with Jane’s encouragement and help, Emmy added stencils to her design. 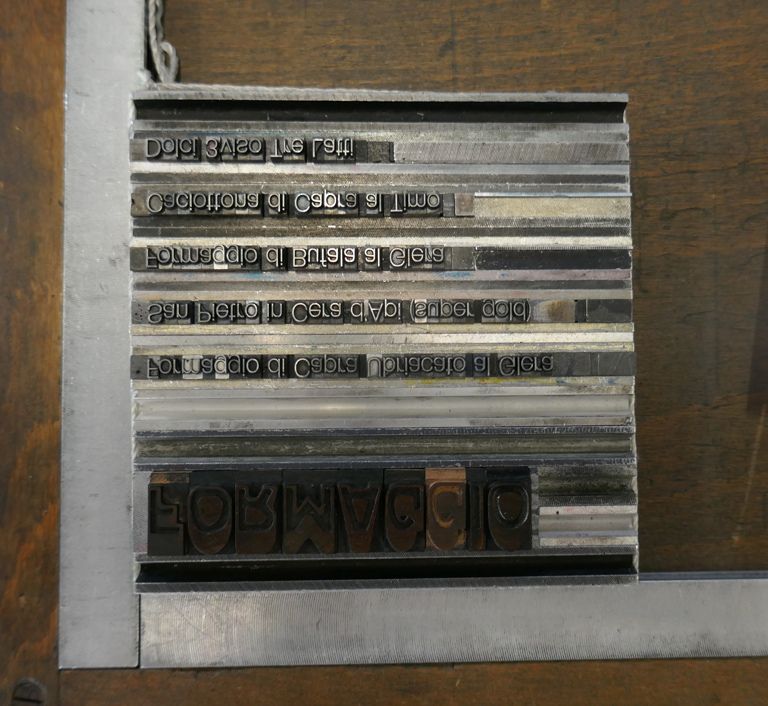 List of cheeses set in metal type with wood type for the heading. Composed by James Stroud who had the formaggio course. 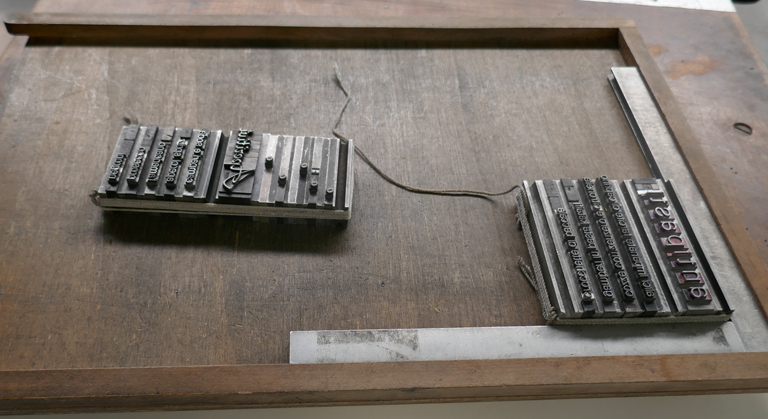 Tied up type by Shaina Pruden (left) and Jason Stadnik (right). Shaina’s list is for the aperitivi course and Jason’s for the antipasti course. 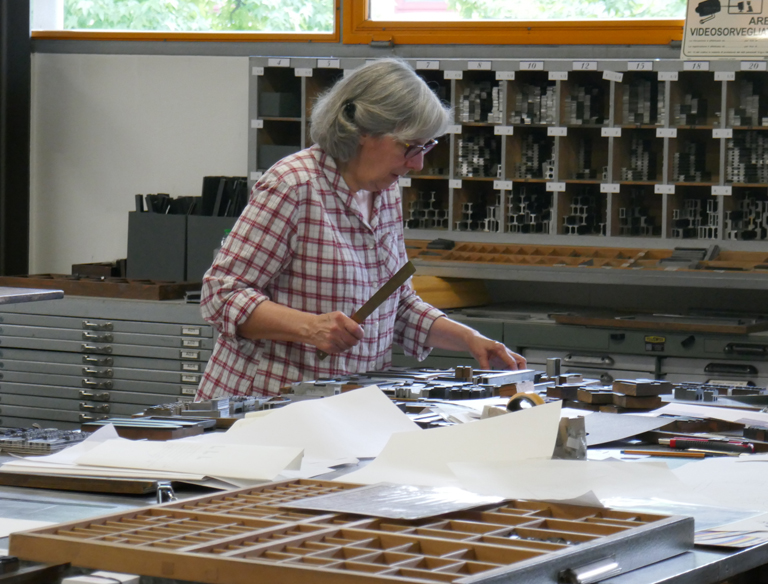 Claire Lukacs beginning to assemble the elements for her wood type “picture” of two people having a conversation over coffee. 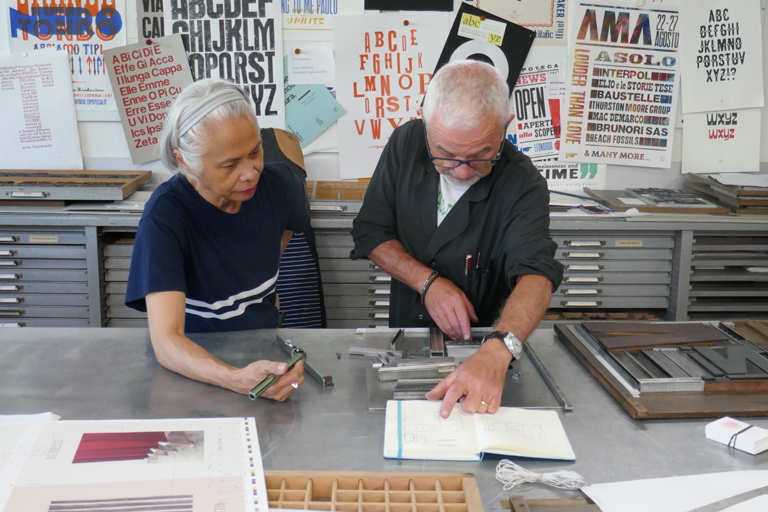 Lucille Tenazas getting advice from Lucio Bottaselle on to how to turn her sketch into type. 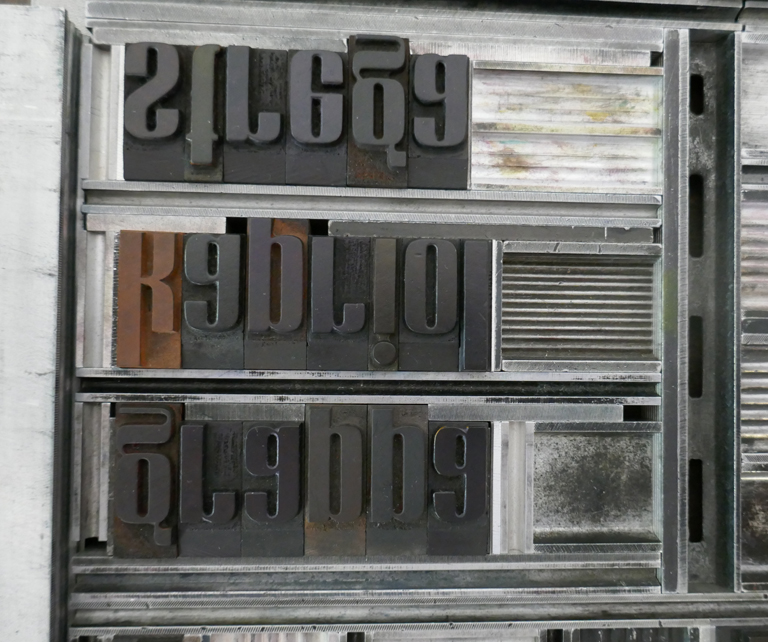 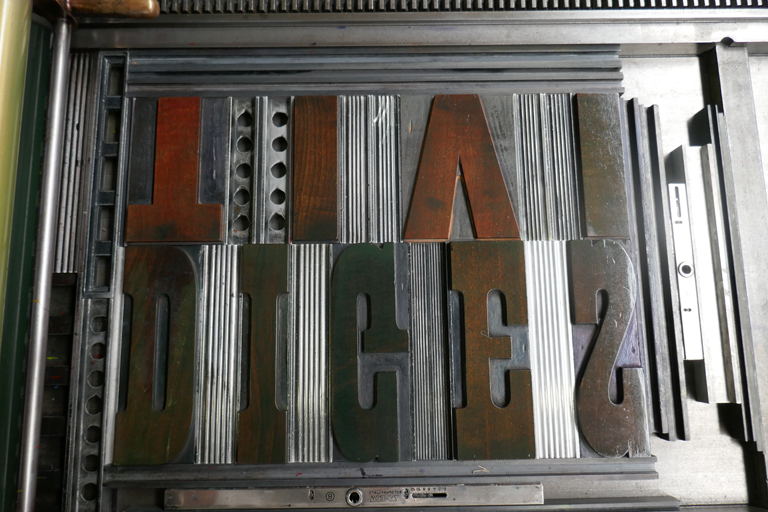 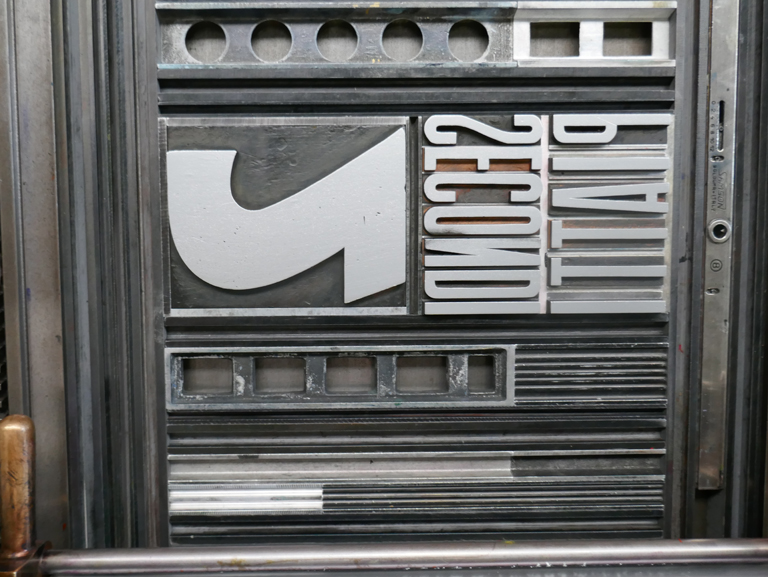 Lucia McCreery’s composition for the secondi piatti course inked in silver and ready to print. 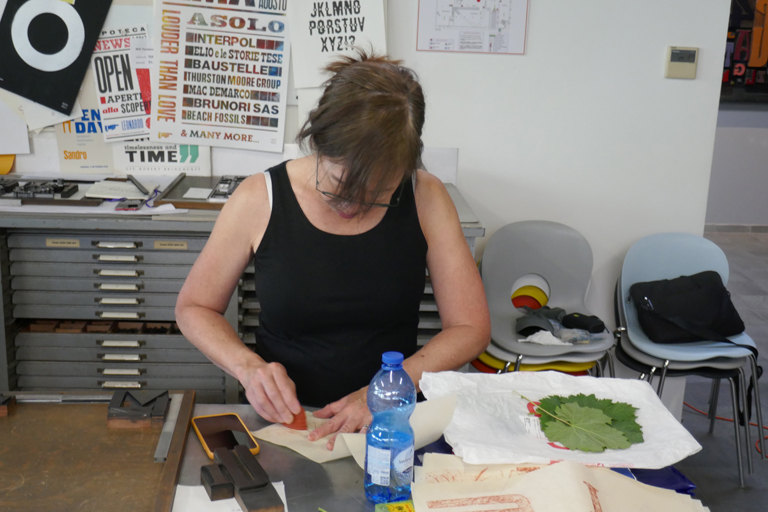 Janine Wong making a rubbing of a grape leaf to test out her pressure proof design. 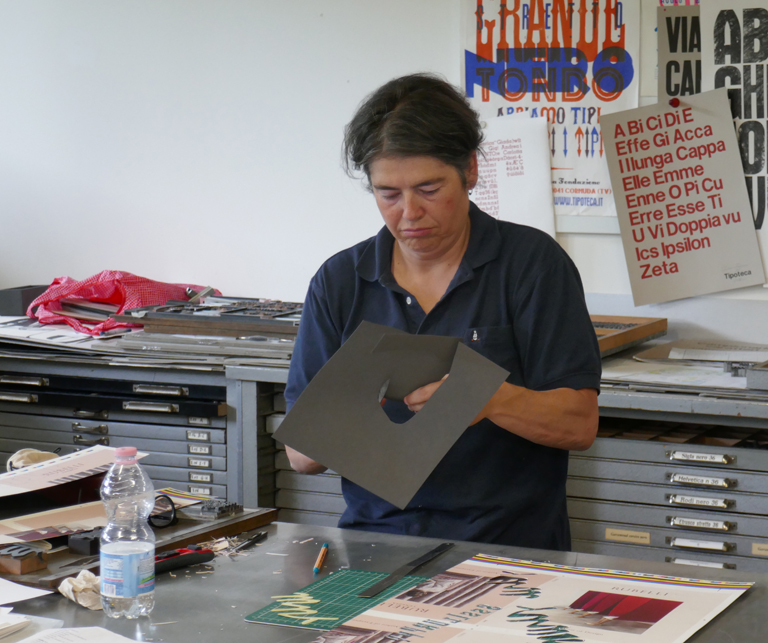 While the participants were engrossed in their course designs, Patricia, Sayre and I worked on the cover, frontmatter, and endmatter. I designed the cover and title page; and Patricia handled the contents page (the menu) and the colophon (the ingredients). She also did the typesetting for the title page since my damaged hands made it difficult for me to handle small type and use a composing stick. Fortunately, I was able to work with the large wood and metal type.

Sayre designed the endpapers as stylized maps of the Tipo Vino Cibo itinerary. Initially there was only going to be a single map at the front and the back was going to be a typographic recreation of Fortunato Depero’s charming illustration of a table setting as an aid to learning English. But the latter proved too difficult to do given our short working time. 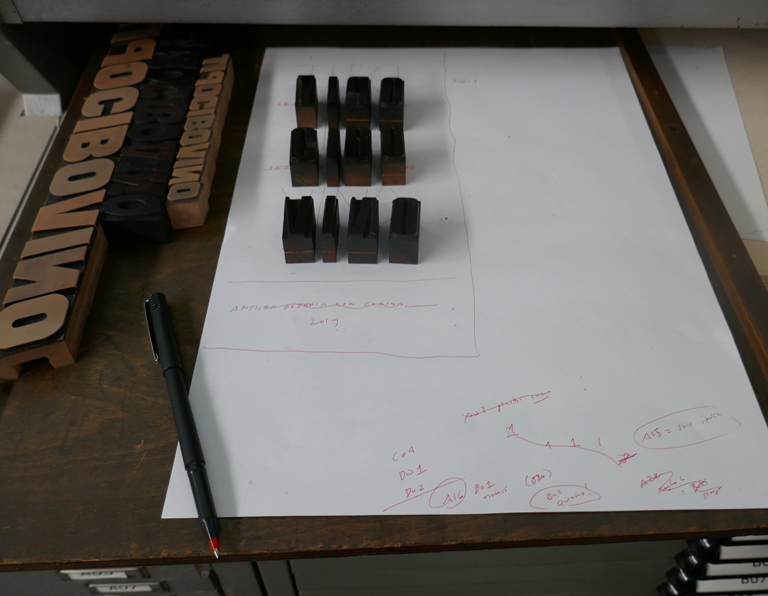 Testing out various wood types for the title page. I settled on Quirinus. 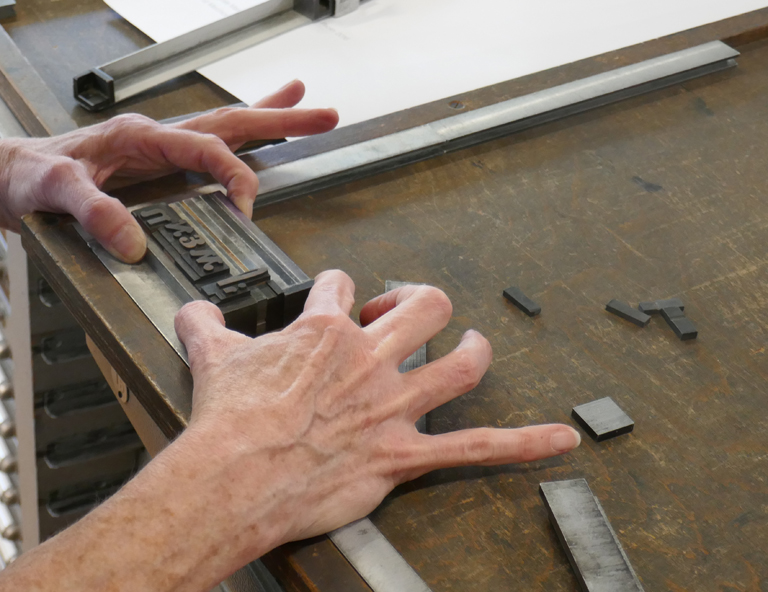 Patricia Childers discovering that she has an upside down u in her menu heading. Later, the entire heading was scrapped. 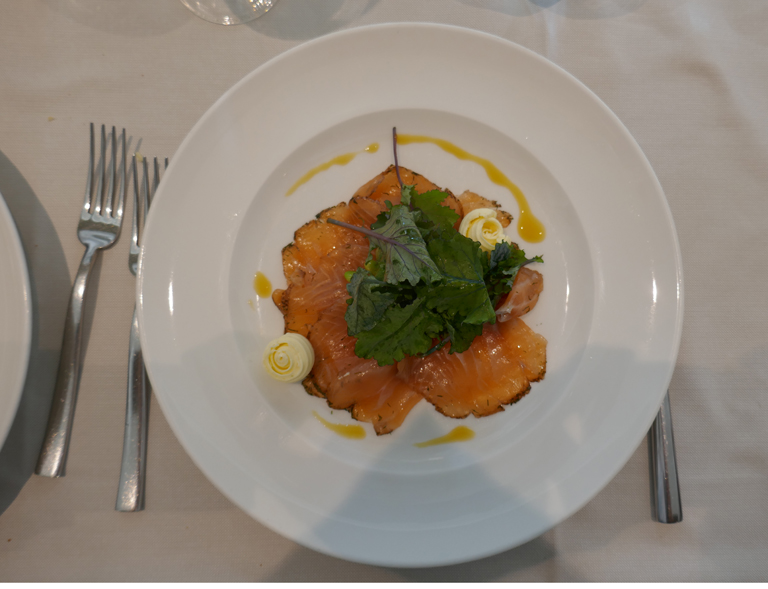