The Definitive Dwiggins no. 93—Laurance B. Siegfried

The Definitive Dwiggins no. 190 addendum—More on Henry King Hannah

I recently realized that The Definitive Dwiggins no. 190: Henry King Hannah and Frederick Siegfried is missing an item. I overlooked a bookplate that W.A.Dwiggins designed for the lHannah. It is undated, but was surely done either in 1905, the same year that Dwiggins designed the cover of Hannah’s The Bible for the Sick, or in 1906. The style of illustration is similar to one that Dwiggins used for a music title commissioned by D.B. Updike in February 1907. [1] 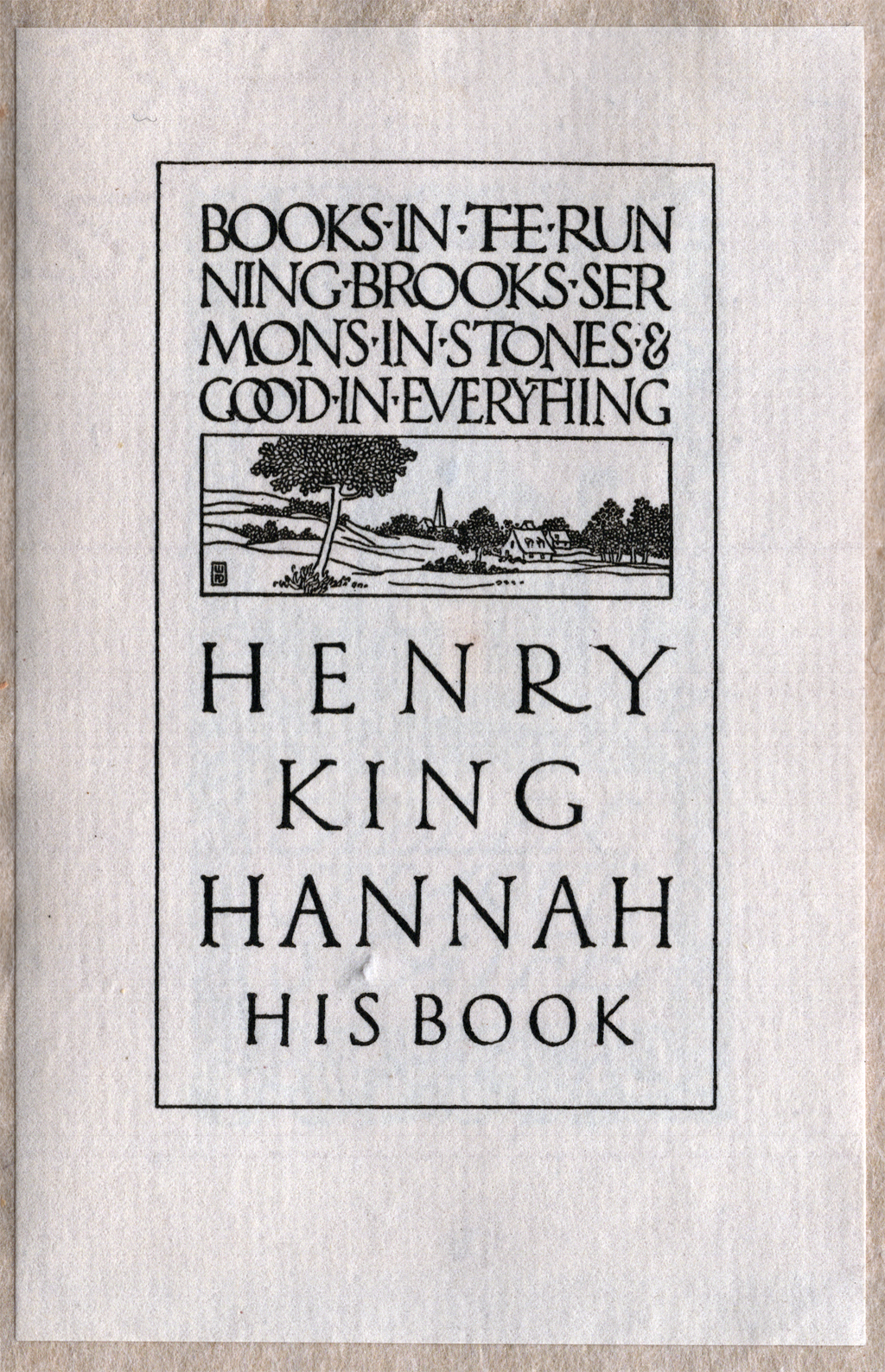 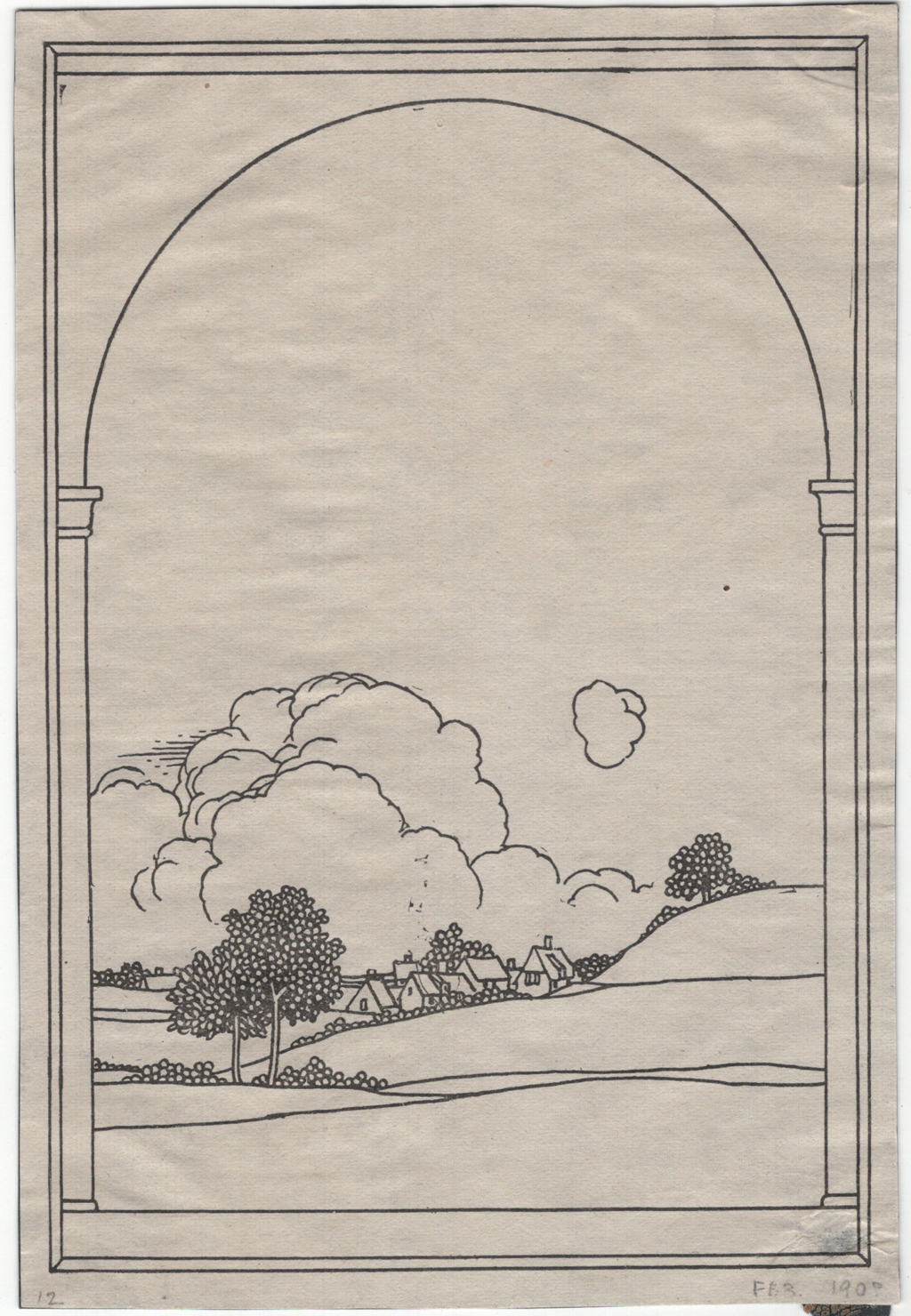 The text in the Hannah bookplate is from William Shakespeare, As You Like It, Act II, Scene 1. The full quotation is “And this our life, exempt from public haunts, finds tongues in trees, books in the running brooks, sermon in stone, and good in everything.” Dwiggins had previously used a different chunk of the text for a bookplate for Ida Farrar McFarland (c.1903) and about the same time that he designed the Hannah bookplate he used it for a print he tried to sell himself, but which was eventually sold as a “Cornhill letter-leaflet” by Alfred Bartlett. [2] 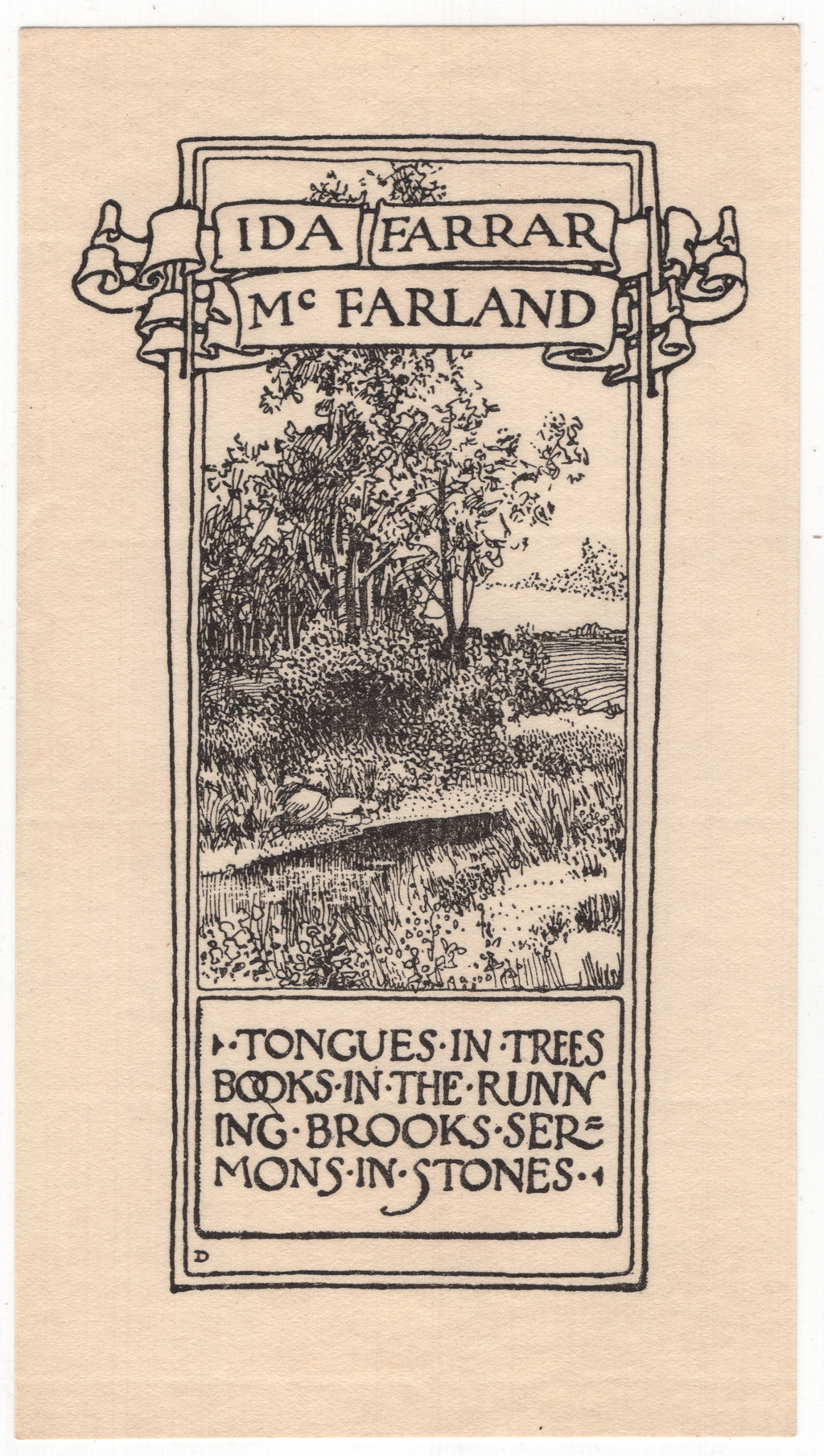 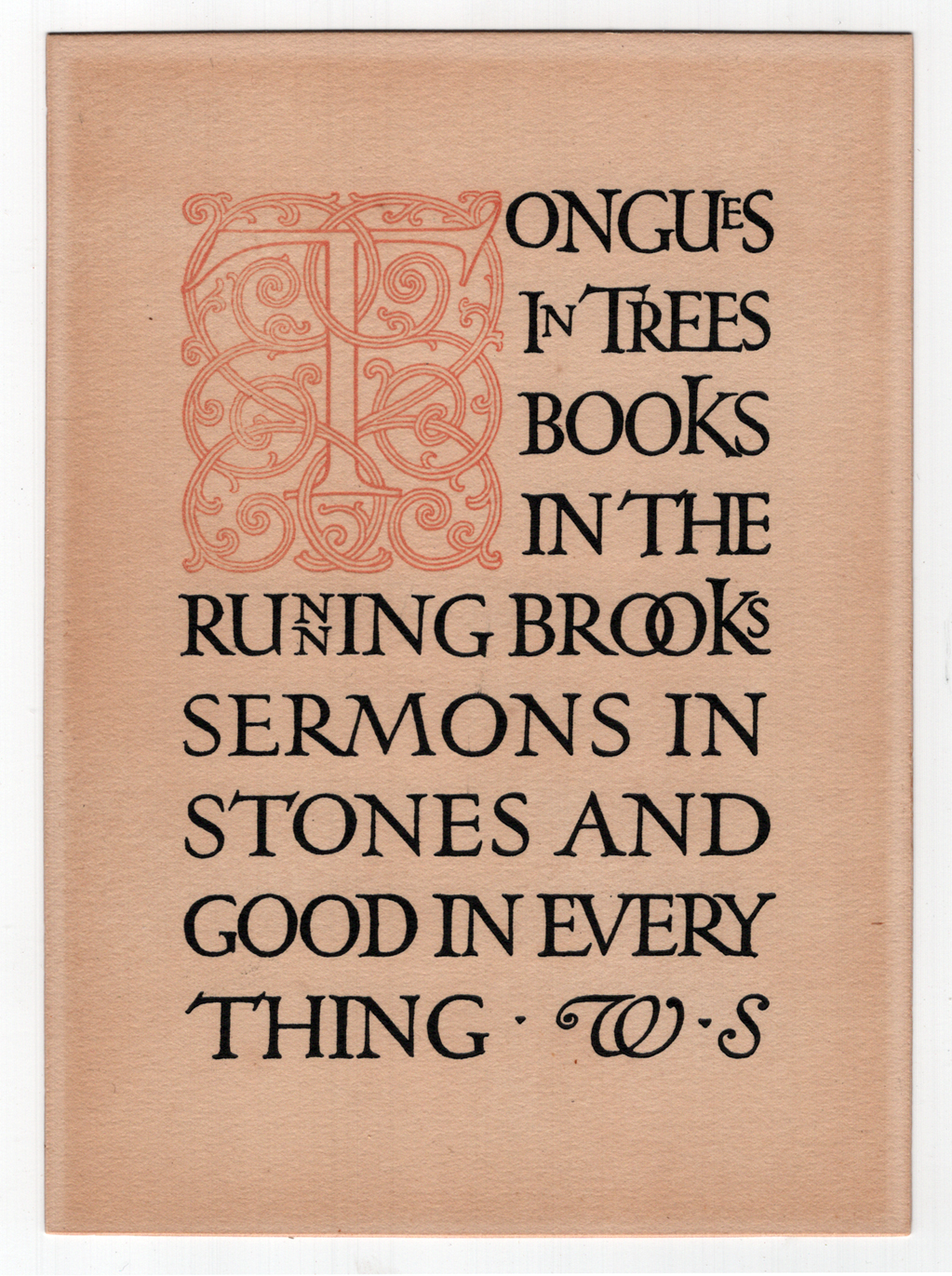 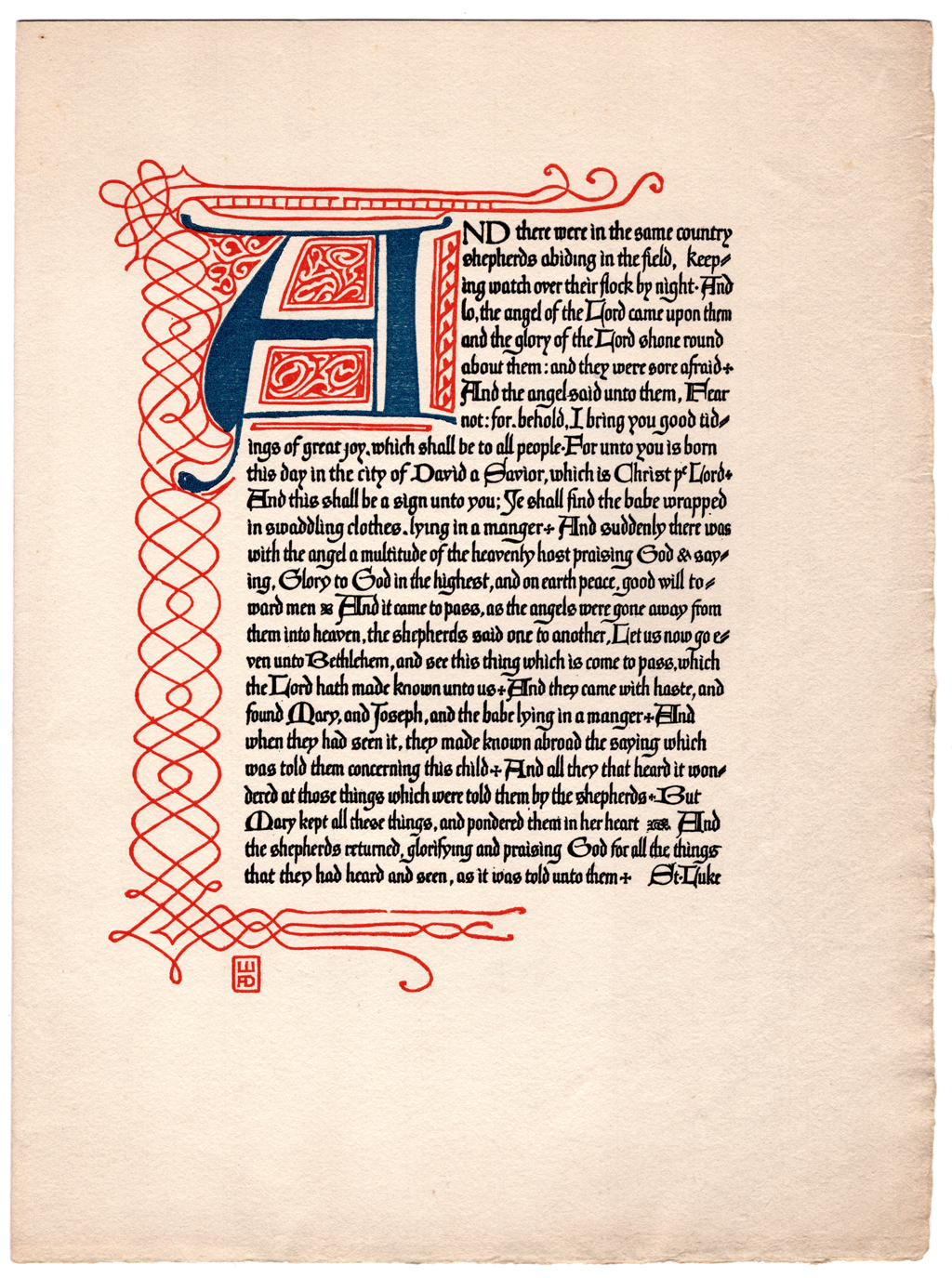 The “chop”-like WAD monogram (a stylized W stacked above AD within a rectangle) used by Dwiggins to sign the Hannah bookplate appears in a few other works of his, all from 1905–1906: “The Sea-Fight,” a colored woodcut, “The Adoration of the Shepherds” (Luke 8:21), a calligraphic greeting card, the cover of The Phillips Brooks Calendar for 1907, and the binding of Cattle Brands by Andy Adams (Boston: Houghton Mifflin, 1906). [3]

The best way to narrow down when the bookplate was designed is to tie it to Hannah’s activities. In October 1906 he left his rectorship at Trinity Episcopal Church in Concord, Massachusetts and moved his family to Montclair, New Jersey. The presence of a church steeple in the distance in the bookplate landscape indicates that it was made for Hannah before then. But I have been unable to more precisely date the bookplate—or to explain why Dwiggins briefly used a Chinese-like “chop” as a mark.

Notes
1. See  Dwiggins’ account book for February 1907 in which several borders for music titles for G. Schirmer are vaguely listed, including one that must be Fantaisie sur un Thème Populaire Wallon pour Grand Orchestre, op. 13 by Théo Ysaÿe (New York: G. Schirmer, 1907). Boston Public Library, 1974 W.A. Dwiggins Collection, Box 81(1). The illustration for this sheet music title page is in Boston Public Library, 1974 W.A. Dwiggins Collection, Box 41, Folder 32 where it is unidentified.
2. In 1900 Ida McFarland (1862–1944) lived a few blocks from Dwiggins’ mother in Cambridge, Ohio on Gomber Street near North 10th Street. I believe he designed the bookplate in 1903 or 1904 upon his return to Cambridge from Chicago. (Note that it is signed D.) The Shakespeare quotation is listed in an undated pamphlet of Dwiggins’ prints as no. 6 “Sermons in Stones”: “Block 6 x 9 inches, on heavy Japanese paper 10 x 13 1/2 inches. Freely drawn Roman lettering in black, with red initial; cut on wood and printed from the blocks. 200 copies. Particularly suitable in subject and treatment for country-house or club.” It is listed in A Catalogue of the Publications of Alfred Bartlett 1906 as a “Cornhill letter-leaflet” where it is simply described as “Designed by Will Dwiggins, and printed in red and black on white Parchment paper.”
3. For Cattle Brands see Dwiggins’ account book entry for 18 January 1906. Boston Public library, 1974 W.A. Dwiggins Collection, Box 81(2). In 1905 Dwiggins printed a small brochure offering prints and cards designed by him. It  included “The Sea-Fight,” a colored woodcut, and “The Adoration of the Shepherds” (Luke 8:21). “The Sea-Fight” was subsequently sold by Bartlett in 1906. For more on The Phillips Brooks Calendar of 1907, which was created in early 1906, see The Definitive Dwiggins no. 184.