The Definitive Dwiggins no. 177 addendum no. 2—Christ with Us

The Definitive Dwiggins no. 190—Henry King Hannah and Frederick Siegfried

Several members of W.A. Dwiggins’ family on his mother’s side—the Siegfrieds and Hannahs—played roles in his professional career. I have already detailed the substantial place that his first cousin Laurance B. Siegfried (1892–1978) occupied vis a vis Dwiggins in The Definitive Dwiggins no. 93. This post focuses on Henry King Hannah (1865–1920), Laurance’s brother-in-law, and his older brother Frederick.

Henry King Hannah was born in 1865 in Georgetown, Ohio in the southern part of the state to William Henry and Ella Hannah. [1] His family moved during his childhood to Augusta, Kentucky, thirteen miles away on the banks of the Ohio River. He was still there in 1880, but the next sighting of him is in Boston in 1890 where he is working as a salesman. His younger brother Samuel Dudley Hannah is also in Boston at that time, working as an advertising clerk. [2] How the two Hannahs ended up in New England is unknown, but for the next several years their fortunes were closely intertwined. By 1892 Henry was listed as a partner in Sherman, Hannah & Co. and Samuel had started S. Dudley & Co. Both businesses were real estate firms located in the Ames Building in downtown Boston. The two brothers continued to dabble in real estate in the Boston area and on Cape Cod through the end of the 1890s, sometimes with property being exchanged between their two companies. [3]

However, at some point in the first half of the decade Henry King Hannah had decided to become a minister and enrolled in the Episcopal Theological School in Cambridge. He received his degree in 1896 and that year was one of the fourth-prize winners in the Newspaper Sermon Association contest for the best sermon for newspaper publication. Hannah married Mary E. Siegfried, the older sister of Laurance B. Siegfried, in October 1897 in Philadelphia. In May 1898 he became the rector of Trinity Church in Concord, Massachusetts. Seven years later Hannah’s household included himself, his wife Mary, three sons, his wife’s youngest brother Laurance B. Siegfried, his wife’s grandmother Margaret Hetrick, and two servants. The financial burdens of supporting such a large household led him to resign his rectorship in October 1906 and move the family to Montclair, New Jersey where his brother-in-law Frederick H. Siegfried was then living. [4] 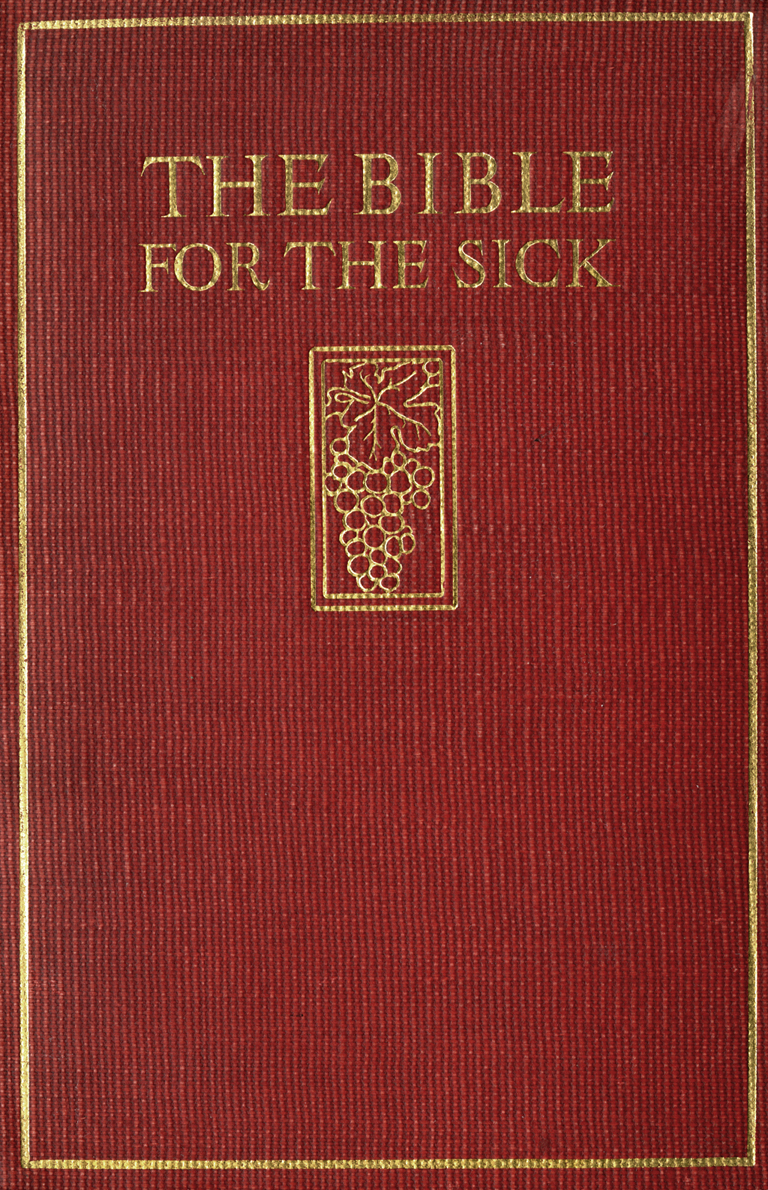 Frederick H. Siegfried was the second child of Addison and Mary H. Siegfried, falling between Mary E. and Laurance. He was born in 1876 in Louisville, Kentucky. [5] The family moved to Montclair in 1884 when his father became the eastern representative in New York for the Chicago Daily News. But in 1893 Addison Siegfried became the general manager of the Ladies’ Home Journal and the family moved to Philadelphia. [6] Frederick attended the University of Pennsylvania, graduating in 1898. That same year he married Mary L. Delano and moved to Boston to work for The Boston Globe. While working as a reporter for the newspaper he was also active in real estate circles. In November 1898 he joined with Samuel D. Hannah and John Summer to form Tacon Realty Co. Presumably he met Samuel Hannah through his sister Mary’s marriage to Henry King Hannah the year before. [7]

Frederick Siegfried did not remain in Boston for long. He moved to New York in the latter half of 1900 where he initially worked for The New York Herald before becoming the business manager of The Engineering Record, published by the McGraw-Hill Book Company, in 1902. Following that job he was the executive head of unnamed textile and pharmaceutical publishing companies. [8]

In 1907 Henry King Hannah and Frederick Siegfried joined forces on an array of business ventures. They formed The North Jersey Realty Company in January; The Morris and Essex Realty Company in February; The Watsessing Trust Company in May; and the Realty News Bureau in November. At some point prior to November Siegfried established the Siegfried Advertising Agency and the two of them founded Hannah & Siegfried, a real estate concern. They had offices at 21 Park Row in New York City for the latter two entities. [9] The Realty News Bureau was created to promote real estate development in Brooklyn where the Siegfried Advertising Agency had many clients. To achieve the same ends in rural Staten Island the brothers-in-law helped form the Staten Island Publicity Association. [10] Additionally, Siegfried was a charter member of the New York Advertising Agents’ Association when it was established in 1911. 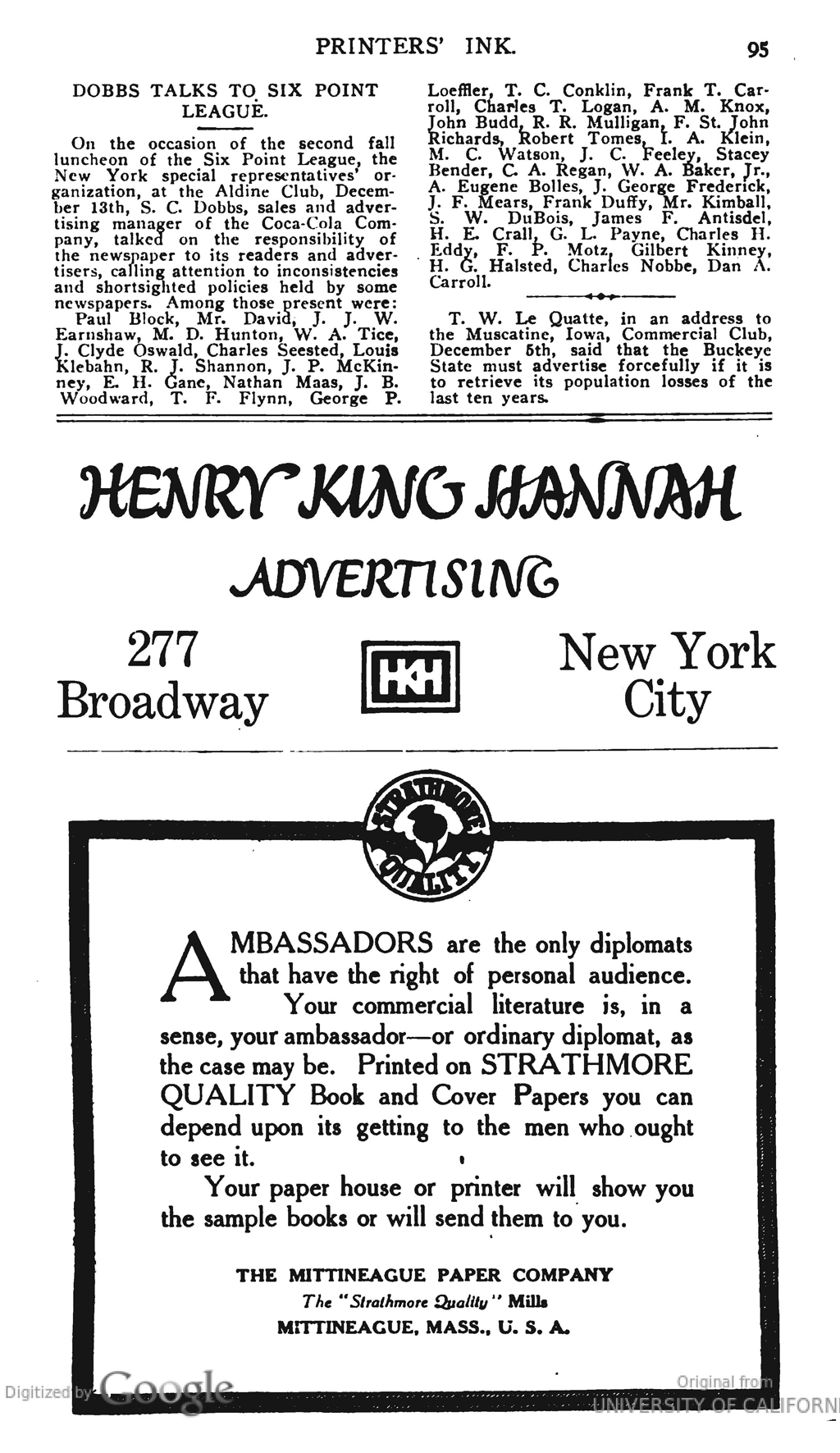 Hannah, independently of Siegfried, set up as an advertising agent in June 1909 with offices located at 277 Broadway in New York. He specialized in advertising for the insurance industry, but also handled the New York Stock Exchange and various banks. Who’s Who in Advertising said this of Hannah in 1916:

Hannah continued in both the real estate and advertising businesses until at least 1918 and possibly until his death. In December 1914 he organized the Mern Products Corporation, a manufacturer of fertilizers and related items. [12] Both he and his brother Samuel were listed as officers of The Publicity Patents Corporation, which had been formed in 1914—though to what end is unclear. [13] Hannah also dabbled in tourism around 1916 and continued to preach on occasion in Montclair. He also painted watercolors which were exhibited. [13]

Meanwhile, Frederick Siegfried also continued working in the advertising and real estate fields. [15] In 1914 he established the Advertisers’ Service Bureau in Montclair to serve the advertising needs of local businesses. At some point he also became the publisher of the Montclair Theatre Bulletin, a business he sold in July 1917. Siegfried was also active in the civic affairs of Montclair. He died in Redlands, California on May 26, 1918. Henry King Hannah died two years later on July 22, 1920. [16]

Between 1905 and 1913 Henry King Hannah and Frederick H. Siegfried commissioned ten known jobs from W.A. Dwiggins. The first two were from Hannah during the latter years of his tenure as rector of Trinity Episcopal Church in Concord. In 1905 he asked Dwiggins to design the cover of his book The Bible for the Sick: A Compilation (New York: Thomas Whittaker, 1905) and in January 1907 he commissioned a bronze plaque, presumably for the church. [17]

In 1908 the Siegfried Advertising Agency asked Dwiggins for a letterhead for the Hannah-Siegfried Co., the real estate venture of the brothers-in-law. In March 1909 the agency had Dwiggins design a “paperhead” (masthead?) for The Hartford Agent, a house organ published by The Hartford Fire Insurance Company to keep their field agents in touch with the home office. Dwiggins create initial letters and an illustration of an elk for it. [18] The first issue of The Hartford Agent was June 1909. That month, Hannah apparently decided to sever connections with Siegfried since he commissioned Dwiggins to design a letterhead for himself. After that Dwiggins only did jobs for Hannah and none for his cousin. [19]

Other than the cover for The Bible for the Sick, the jobs that Dwiggins did for Henry King Hannah and Frederick H. Siegfried were minor items. They are chiefly of interest for exposing the importance of personal contacts (especially family ones) for designers acquiring clients and jobs. And for seeing his first efforts with clients outside of New England.