The Definitive Dwiggins no. 178 addendum—The Mystery of the York Mysteries Solved

The Definitive Dwiggins no. 184—The Phillips Brooks Calendar 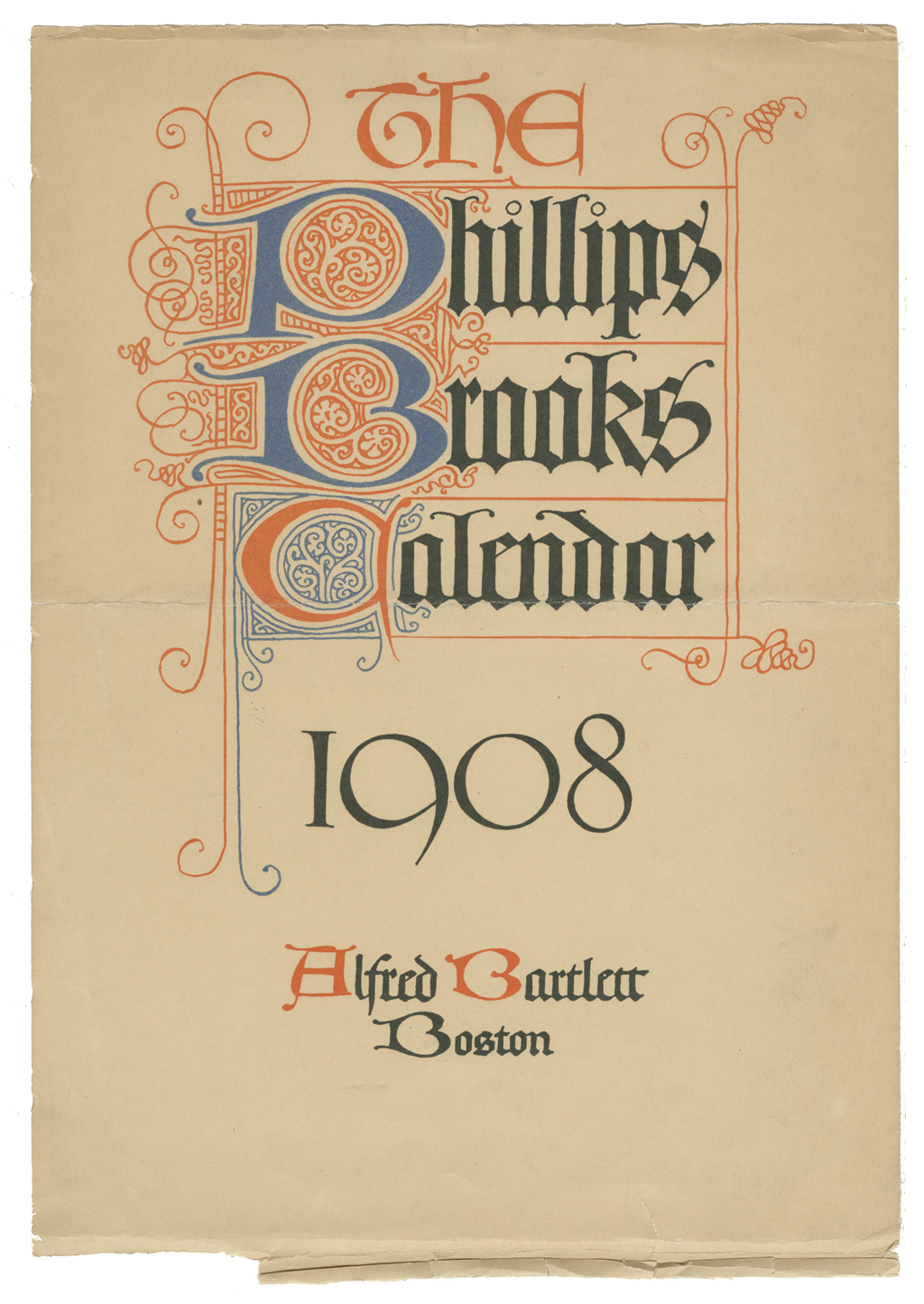 Alfred Bartlett (1879–1926) was, along with Daniel Berkeley Updike of The Merrymount Press, the most important client that W.A. Dwiggins had in the early stages of his career. [1] For him Dwiggins designed greeting cards, motto cards, dodgers, letter leaflets, postcards, and stationery. He also contributed illustrations, ornament, and lettering to various small books, the second incarnation of The Cornhill Booklet, and several calendars. Among the latter were The Symphony Calendar, A Calendar of Prayers by Robert Louis Stevenson, A Calendar of Inspiration, The Calendar of Right Thinking, The Thumb-Nail Calendar, The Guide-post Calendar, The Phillips Brooks Calendar, The Louis XVI Calendar, and The Watteau Calendar. Most of these were collective efforts involving T.B. Hapgood, H.B. Ames, Herbert Gregson, and Frederic W. Goudy as well as Dwiggins. However, the last three were entirely designed by him. [2] Of those, The Phillips Brooks Calendar stands apart as the most ambitious of the Bartlett calendars involving Dwiggins. [3] Although unillustrated, it rivals A Stenciled Calendar for 1904 by Edward Penfield and The Beatitudes Calendar (1905) by R. Anning Bell as a one-man production.

In his 1906 catalogue, Bartlett emphasized Dwiggins’ role in The Phillips Brooks Calendar:

[The Phillips Brooks Calendar] has been designed in its entirety by Mr. Will Dwiggins, no type having been employed. The text has been lettered in black after the manner of the thirteenth century illuminated manuscript, and each selection is embellished by a monastic initial letter drawn in minium and lapis lazuli. [4]

The Phillips Brooks Calendar consists of thirteen loose sheets (a cover and one page for each month) tied together with gold tassels. It was shipped in a box labeled in black “The Brooks Calendar.” The sheets are printed in blue, red and black. The cover sheet says “THE / Phillips / Brooks / Calendar / 1907 /Alfred Bartlett / Boston.” The remaining sheets contain a quotation from Brooks above a boxed-in monthly calendar. At 8 inches x 13 inches in size The Phillips Brooks Calendar was the second largest calendar published by Bartlett. [5]

Phillips Brooks (1835–1893) was the Rector of Trinity Church in Boston from 1869 to 1891 and then the Bishop of Massachusetts for the remaining years of his life. Although he is best remembered today as the composer of the Christmas carol  “O Little Town of Bethlehem,” in his day he was equally famous for his sermons, the bulk of which were published in a series of eight volumes after his death. [6] 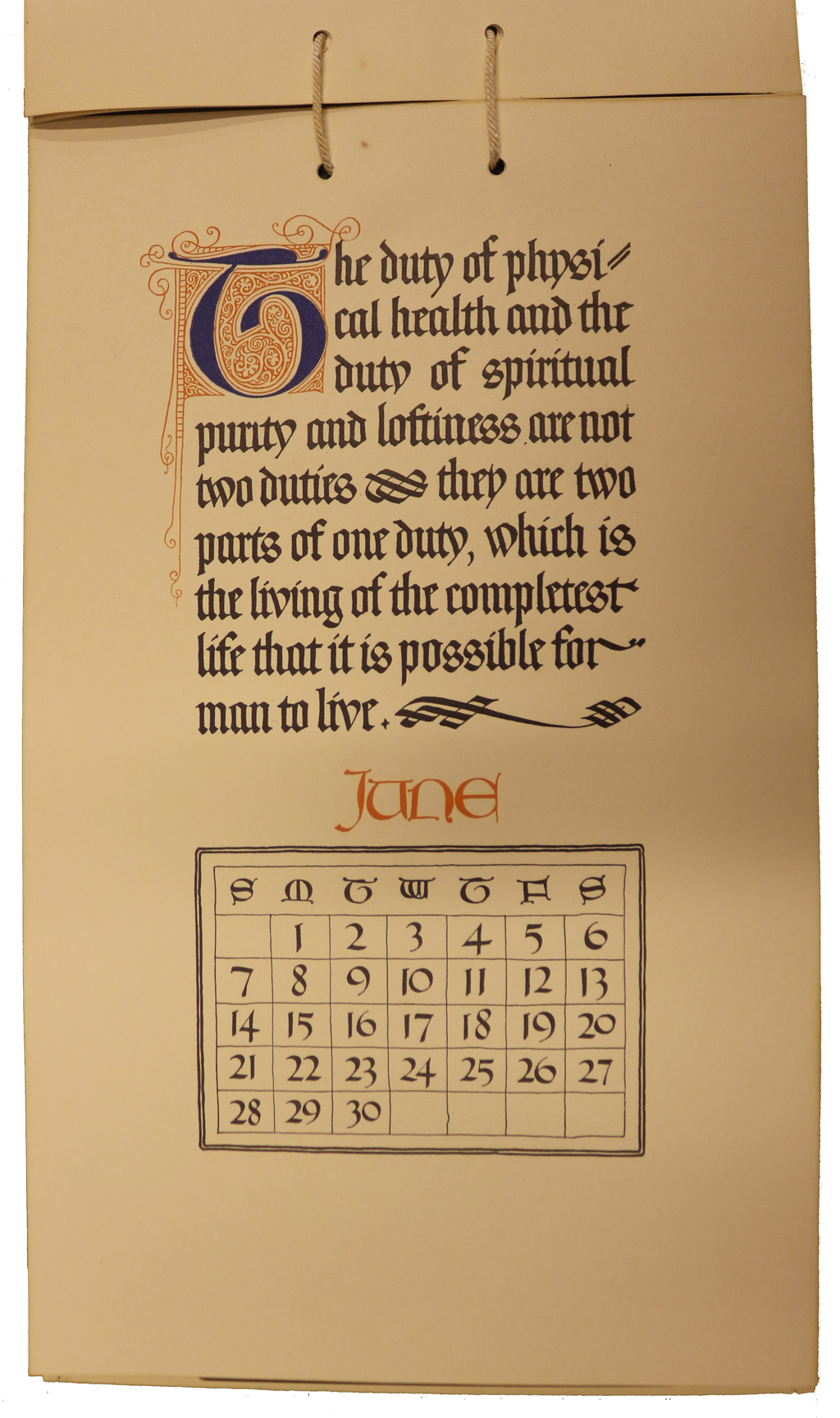 The Phillips Brooks Calendar is medieval in appearance. As Bartlett indicated in his catalogue description, the entire calendar was hand-lettered by Dwiggins. No type was used. On the monthly pages the initial letter of each Brooks quotation is in blue surrounded by red decoration with the remainder of the text in black textura; the month is in red versals, the days in black versals, and the dates in black. The versals are drawn while the textura and the numerals are calligraphic. [7]

Versals
The decorated versals are different from those used for the months of the year and days of the week. Although E.G. Gress, the longtime editor of The American Printer, thought the decorated versals were inspired by “the style of initial and decoration found on the famous Psalter of Fust and Schoeffer,” the connection is superficial. [8] Dwiggins may have taken his blue-and-red color scheme from the 1457 Mainz Psalter, but nothing more. Several of the large blue versals (I, P, S, T) are modeled directly on letters from Plate 48 (“a MS. English. About 1400”) in the second edition of Alphabets Old and New by Lewis F. Day, while their red decoration seems loosely derived from it. A few of the blue versals (A, M, R) have no clear model in Day or any other contemporary lettering book. [9]

Day’s Plate 48 is also the basis for the majority of the versal letters used by Dwiggins to compose the names of the months and the days of the week. A few letters (G, S, W) are derived from Day’s Plate 42 (“MSS. 14th Century”). He has not copied Day’s exemplars slavishly, but has made them a little bit lighter and crisper overall. Sometimes he has dropped the ball terminals. More importantly, he has adjusted their proportions (H, L, M) and extenders in order to make them function successfully as word units. He slightly altered V from Day’s Plate 42 (“Psalter. 13th Century”) and seriously modified J from Plate 48. Dwiggins’ Y varies greatly from word to word, but each version can ultimately be traced back to Plate 42. 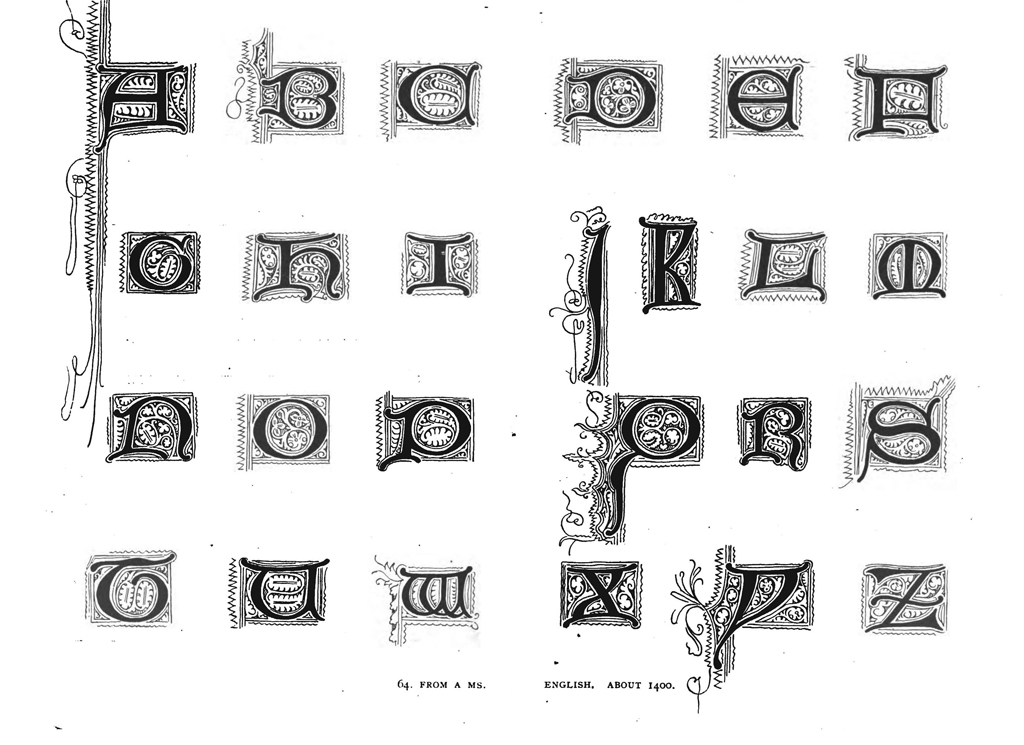 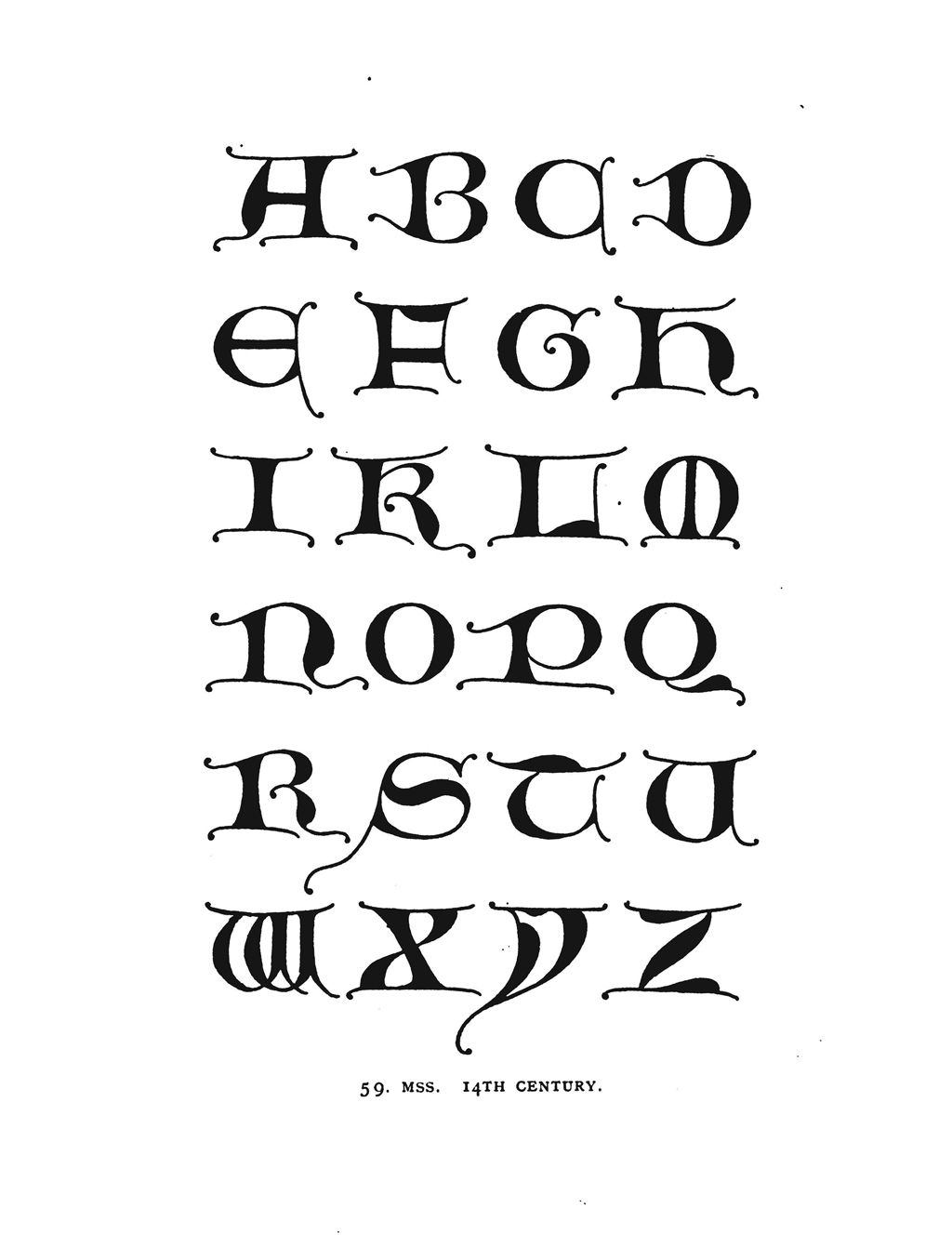 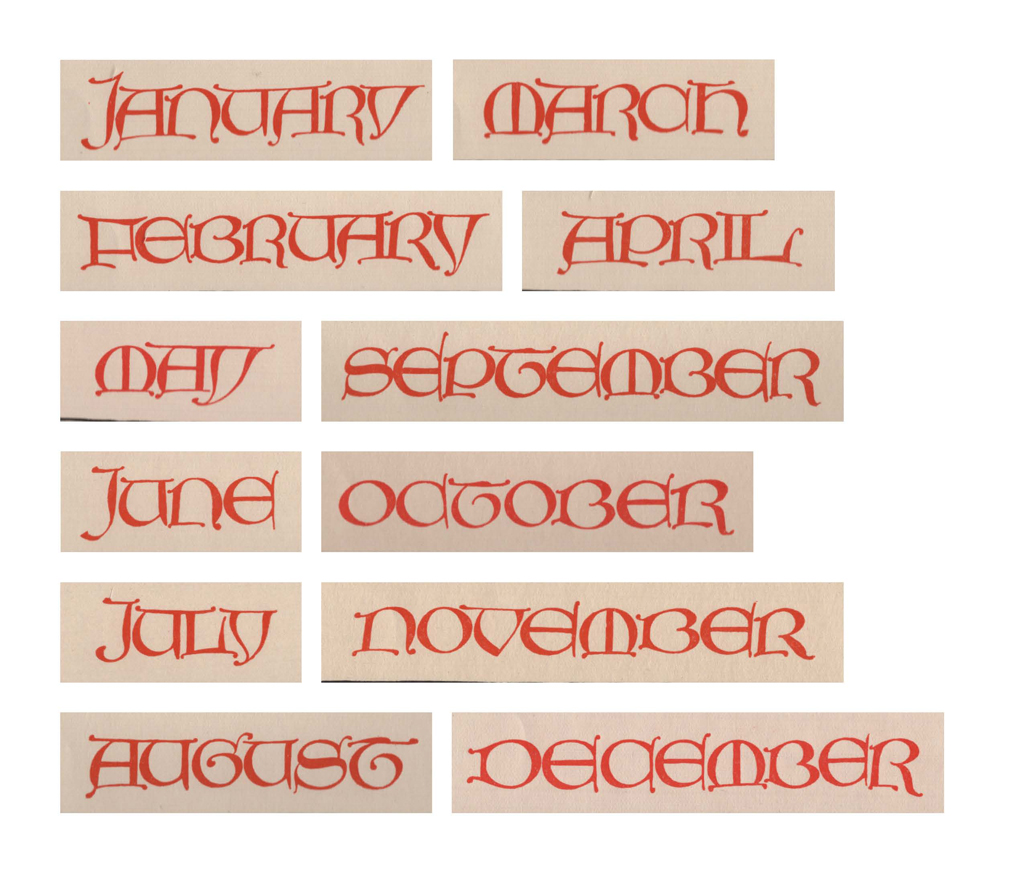 Composite showing of names of months from The Phillips Brooks Calendar 1907. Calligraphy by W.A. Dwiggins. Note the variant forms of Y.

The versals of The Philips Brooks Calendar, created in 1906, show how quickly Dwiggins’ calligraphy had matured. The same Plate 48 in Day had been his model for versals used in a calligraphic broadside he created as a Christmas present for his mother several years earlier. [10] The earlier versals are heavier, rougher, and generally clumsier. Some letters (e.g. S in “BECAUSE”) show the lingering influence of Frederic W. Goudy, Dwiggins’ mentor. The most notable aspect of his versals, however, is how Dwiggins has ligatured the letters to fuse each word together. The source of that idea, if there was one, is unknown. 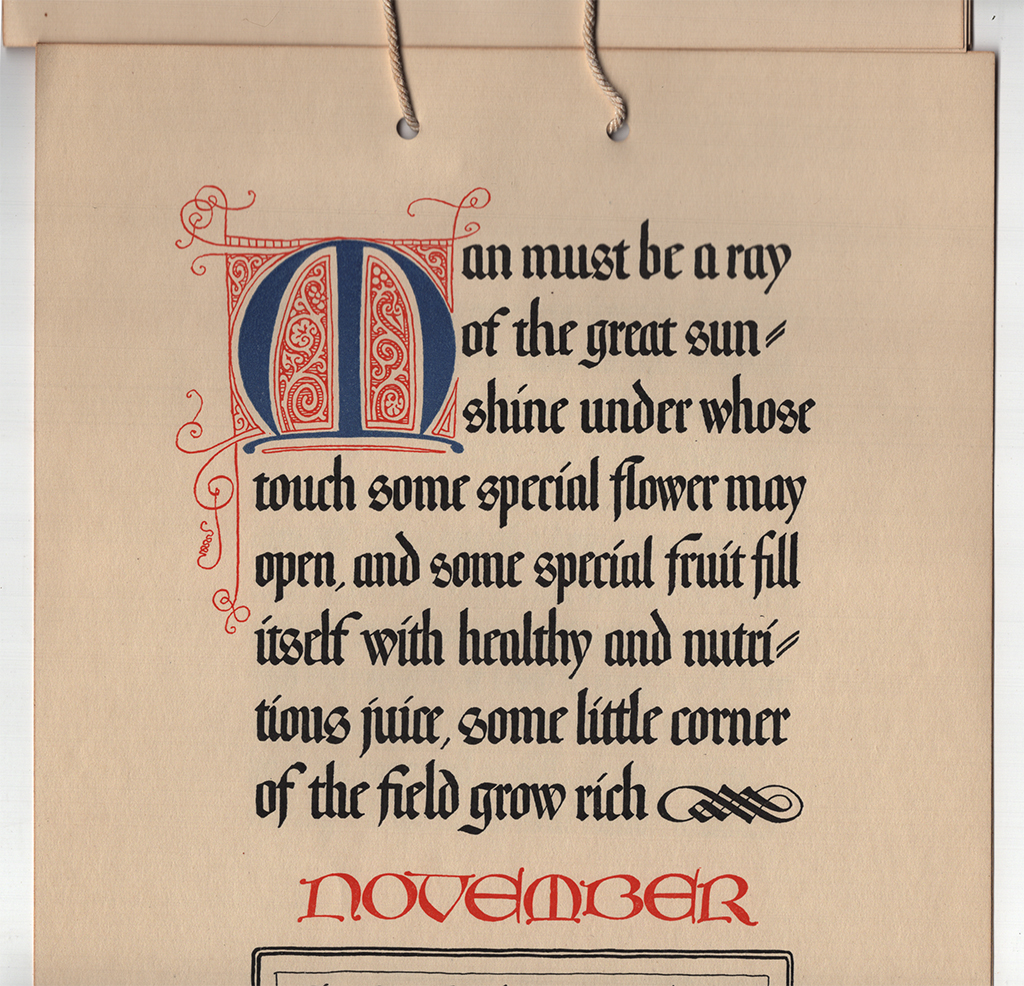 Detail of November page for The Phillips Brooks Calendar 1907. Design and calligraphy by W.A. Dwiggins; published by Alfred Bartlett.

Textura
The body of each Phillips Brooks quotation was written out by Dwiggins in a texture with versus for capitals. The textura is one that Dwiggins employed often in the roughly eight years that he carried out commissions for Bartlett. It is a pleasant hand that is marked by supplenesss, rather than the severe rigidity often associated with Northern European medieval scripts, and by easy legibility. To achieve the latter Dwiggins not only eschewed complex textura capitals, but he also avoided spiky ornamentation and interlaced flourishing with the minuscules. His textura is pen-made with only a few twiddles (e.g. the slightly thickened endings of a few ascenders and of the descender of p). He has broken wth tradition and used a rotunda s, kept h on the baseline (and sometimes f also), made v, w, and y with diagonal strokes. [11] I have been unable to identify a specific model for Dwiggins’ textura. It is certainly not derived from any of Goudy’s texturas. [12] 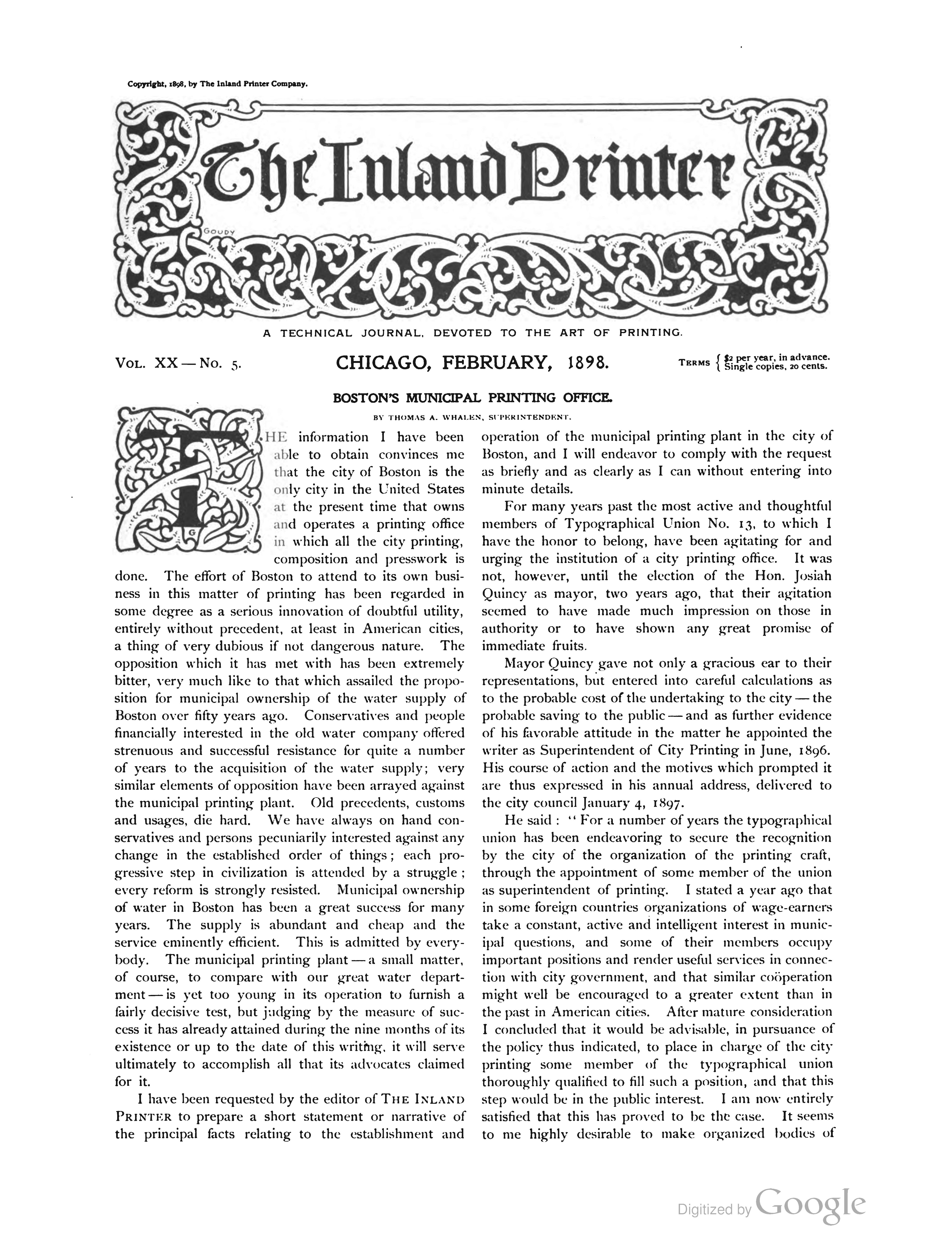 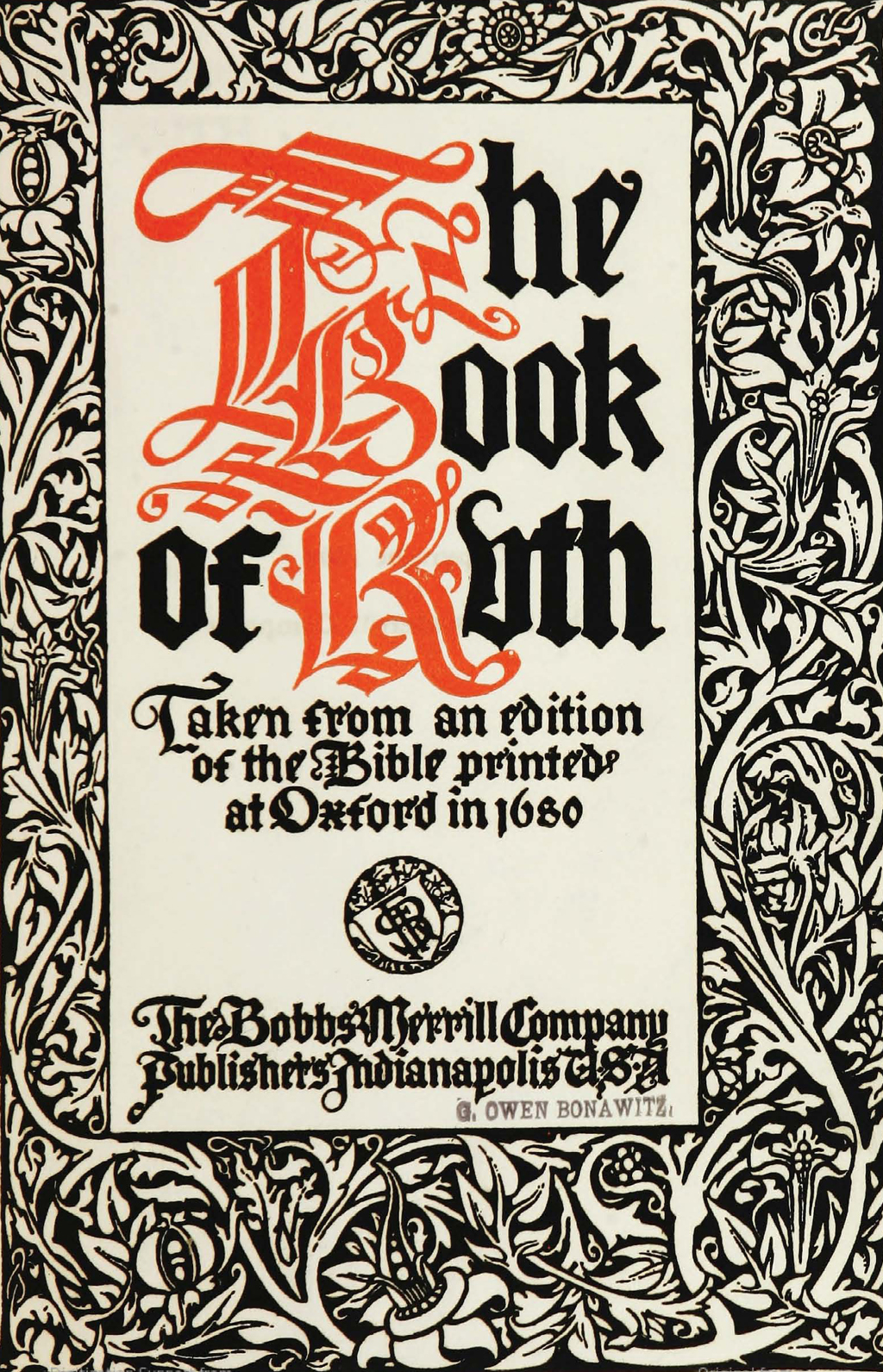 Ttle page [cropped] of The Book of Ruth (Indianapolis: The Bobbs-Merrill Company, 1904). Design, ornament and calligraphy by Ralph Fletcher Seymour. 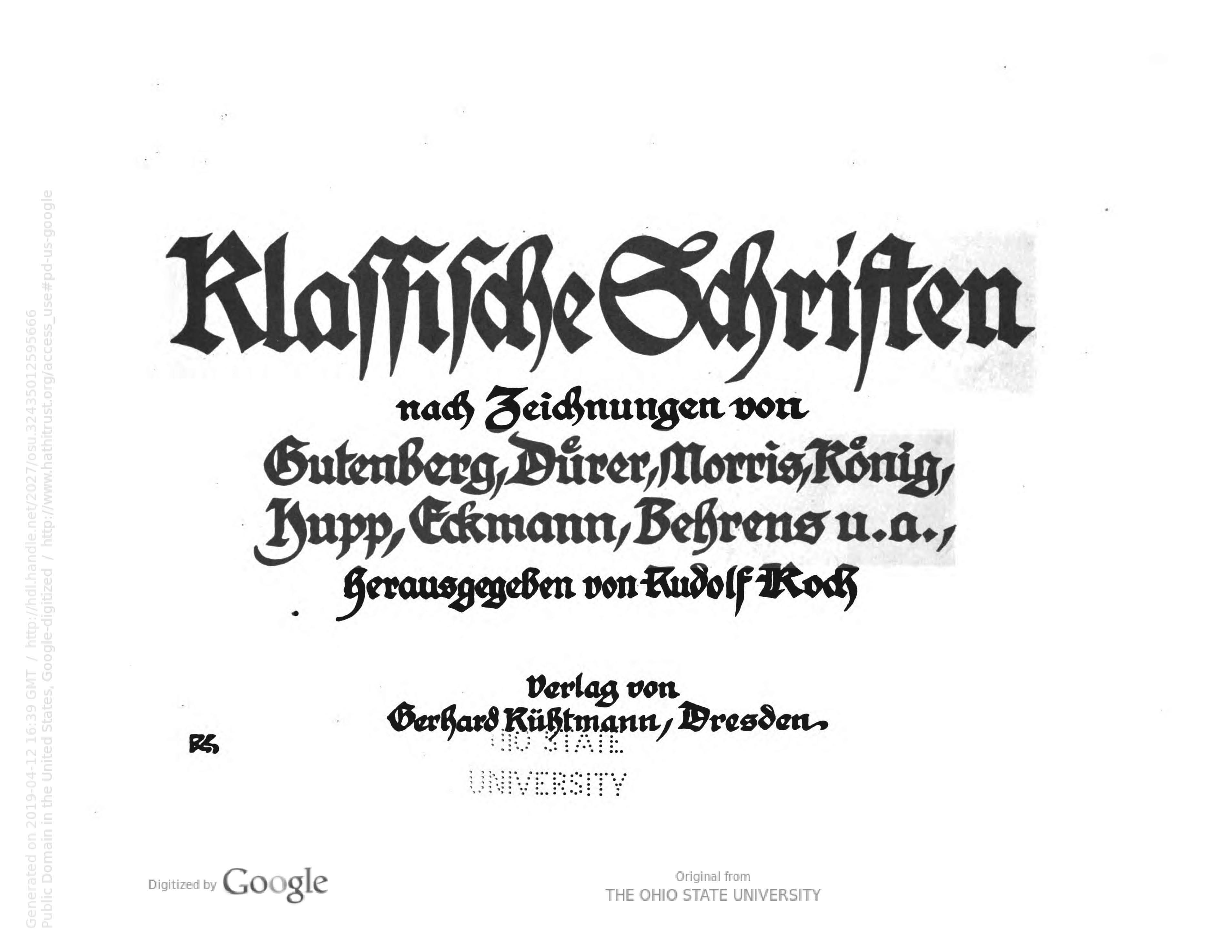 The Phillips Brooks Calendar was not only Dwiggins’ first commission for Bartlett, but it was his first substantial job for any Boston client. It cemented his relationship with Bartlett and displayed his abilities to others. Updike was among those who took notice. In early 1907, he wrote to Bartlett:

Have you any over sheets of the Phillips Brooks’ Calendar? I want to get a few as samples of lettering to send to a poor person who desires to see good models, and if you have one or two damaged copies of this calendar, they would be good enough for my purpose. I would be glad to pay you for them. [13]

The versals and textura that Dwiggins displayed in The Phillips Brooks Calendar became staples of his subsequent work for Bartlett over the following half dozen years, deployed for motto cards, dodgers, Christmas cards, and more.

where did WAD get his model for the insular/carolingian letters? not Day, Brown or EJ