Tutorial no. 5—Calligraphy: The Basics of Italic 1

The Basics of Italic: Skeletal Forms 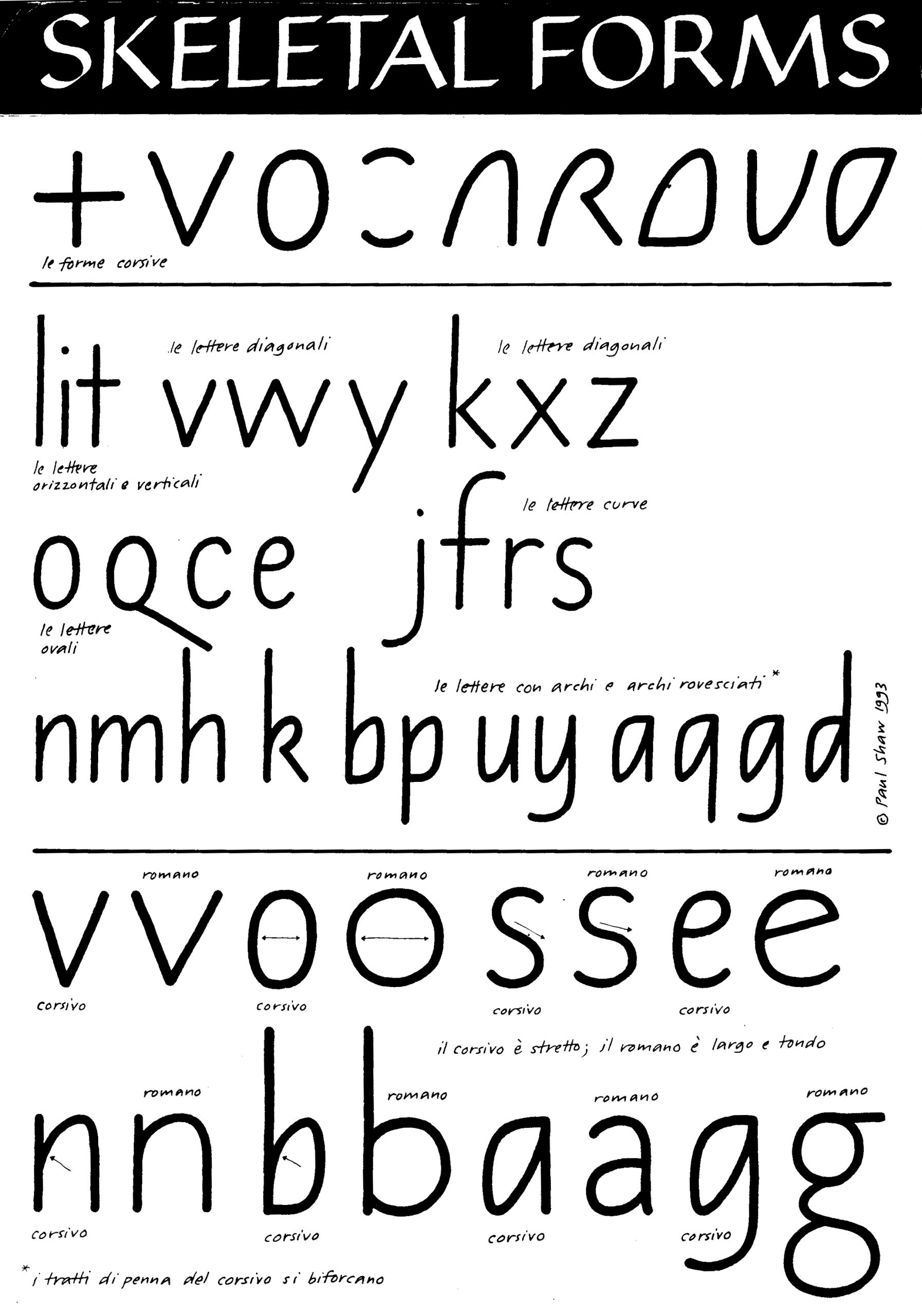 The four images that comprise The Basics of Italic are scans of photocopied sheets I designed in 1993 for inclusion in the newsletter of the Associazione Calligraﬁca Italiana in Milano, Italy. That is why the notes are written in Italian. I will provide an English translation for each sheet as it is posted.

The ﬁrst sheet shows the skeletal forms of Italic as a means of comparing and contrasting it with the more familiar roman letters. It has been written with a Speedball Series B nib but the letters can be made with any monoline tool such as a ballpoint pen or pencil. Row 1 shows the basic cursive forms. (Italic is a cursive or running hand. A hand is a script or writing style.) From left to right: crossing horizontal and vertical strokes; the two basic diagonal strokes; an oval, the two basic curved horizontal strokes, the crucial “shark’s ﬁn” arch (which leans to the right), a special variant of the arch, the closed version of the arch, the arch upside down (which leans to the left), and the closed version of the upside down arch. Of these basic forms the most important are the different iterations of the arch. They are what distinguishes italic from a condensed roman.

Rows 2–4 show the small letters (minuscules) of the italic alphabet in groups. The l i t group is comprised of letters only having horizontal and vertical strokes. Note that the t is shorter than the l. The v w y k x z group is comprised of letters having diagonal strokes. The o q c e group is made up of oval letters. (The q is an alternate form commonly used in the Renaissance.) The j f r s group consists of letters having horizontal curved strokes. Note that the j and f are essentially mirror images of each other. Row 4 contains the key letters in italic, those that utilize the “shark’s ﬁn” arch and its variants. They are subdivided into the open arch group of n m h k. (The k has a kink in the right side of the arch. This is a more cursive k than the one in the diagonal group.) The upside-down arch group is u y. The closed arch group is b p and the closed upside-down arch group is a q g d. (This is the normal, more cursive q.)

Rows 5–6 shows the differences between italic (corsivo) and roman (romano). The arrows in the counters of n and b indicate branching, a feature that distinguishes italic from roman.

To practice these letters use lined paper. Write only on every fourth line, leaving two lines in between for the descenders of the letters you are writing and for the ascenders of the letters on your next line. Make the bodies (x-height) of your letters one line high and let your ascenders (with the exception of the t) be two lines high. But make your descenders halfway or 3/4 down the next line in order to optically balance your letters. (Choose one depth and be consistent.)