Tutorial no. 5—Calligraphy: The Basics of Italic 3

Tutorial no. 5—Calligraphy: The Basics of Italic 4

The Basics of Italic: Swashes 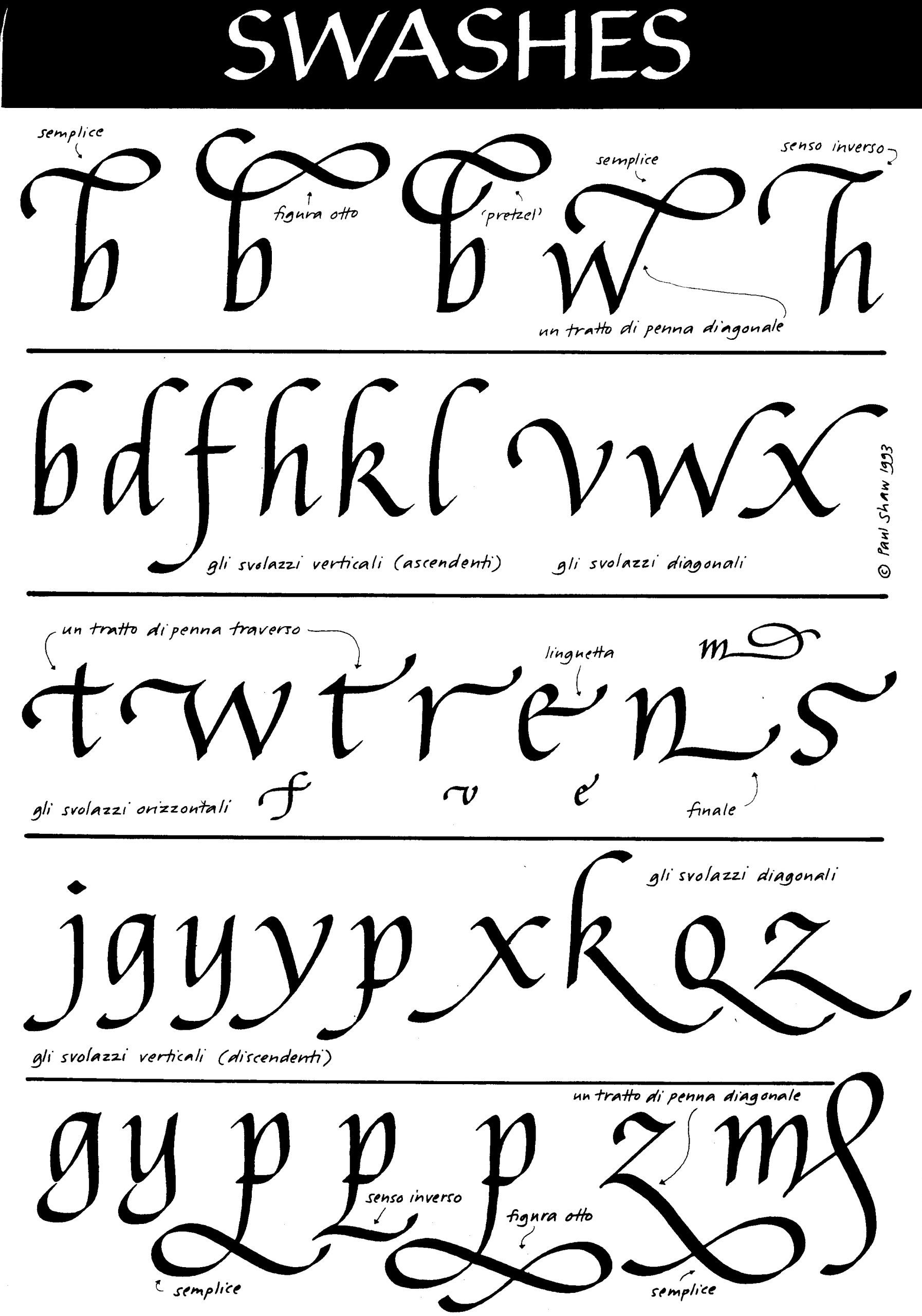 This post, the last of The Basics of Italic, shows the rudiments of creating swash Italic letters. Most swash letters are ascenders or descenders since swashes need room to breathe and the most commonly available free space is in the margins and between lines. Swashes on ascending strokes, both vertical and diagonal, are shown in Row 1.

b d f h k l—The swash replaces the entry stroke at the top of these letters (with the exception of f). Begin b d h k l in the same manner as making f previously, but after leading into the stem continue as if making each letter in the non-swashed form. Then, add the swash—which is identical to the eyebrow stroke in c. Do not let it hang over the body of b h k and keep it short for d l. f already has strokes that look like swashes so there is nothing new to be done.

v w x are letters which sometimes have one of their diagonal strokes extended upward into a swash. If the stroke is the ﬁrst one then the swash replaces the entry stroke. Begin the letter by placing the above the waist line (approximately halfway between it and the writing line above) and curl into the diagonal. Then complete the letter as before. Go back to the beginning and pull down to the left to make the swash. For a swash at the end of the letter—which is more common—make the letter as previously but stop before adding the ﬁnal stroke. Begin that stroke in the space between the waist line and the writing line above and make it without an entry stroke—simply slide on the edge of the pen and into the diagonal from upper right to lower left. Then return to your starting point for that stroke and add an eyebrow stroke as the swash. Although the sheet shows v with a starting swash and w x with ﬁnial swashes, the reverse is possible.

j g y y p and x k q z letters have descending swashes. j g y are, like f, the same as before since they have strokes that look like swashes. A similar smile stroke is added as a swash to p after the bowl is made. The stem has no exit stroke, but instead trails off to the left. The alternate y follows the ductus of v except that the second stroke continues past the writing line and then trails off to the left. It is completed with a smile stroke made by pulling from left to right. For the swash x simply continue to pull the second diagonal stroke down below the writing line and then push it to the left. If that proves difficult to do, stop when the stroke becomes a hairline and then make the swash by pulling from left to right (as in making the last stroke of g or j). For k q z simply pull the leg (k), tail (alternate q) or end stroke (z) down below the line and then curve upward slightly. The length of these swashes depends upon the space available and your own taste.

The swashed letters in Row 2 (t w t r e n s—and the smaller f v e m) have horizontal swashes. These are letters that should only be used at the beginning (if the swash is on the left) or the ending of a line (if the swash is on the right). Do not use them in the middle of a word.To make the ﬁnial t r simply extend the crossbar / arm and turn upwards. For the e the swash is called a tongue. It is a continuation of the second stroke, the one that closes the bowl. Once that strokes curls back to the stem, bounce it back to the right and then turn it upward. The tongue can also be made as a diagonal swash. The ﬁnial swash n can also apply to a d h m u. At the end of the right vertical stroke turn slightly toward the left before reaching the writing line and then bounce outward to the right and push upward slightly to complete the swash. This stroke often looks best if it has a slight wiggle to it (like the alternate r or z). The ﬁnial s is made by extending the third stroke with a wiggle and slight upward movement.

The other letters in Row 2 are beginning or initial swashes and they are often made by adding the swash after the letter is made. Make the ﬁrst stroke without an entry stroke, leaving a hairline at the left of the crossbar (for t and f) or a wiggly horizontal stroke that leads into the ﬁrst diagonal of w v. Make this stroke by pulling from left to right; then pause and slide the pen slightly downward to the left before moving diagonally from upper left to lower right. Then complete the letter in the usual fashion before returning to the beginning stroke and adding the swash by pulling down.

The letters in Row 4 have more complicated swashes. g y have “pelican” jaws. These are Renaissance variants. Simply begin the last stroke of each letter at the bottom of the upside-down arch and then curve to meet the ﬁrst stroke. The stroke will be curved more than the smile stroke—but do not let it sag. The other letters show the possibilities of turning a simple swash into a flourish. A flourish can be made by extending a swash, reversing its direction, turning it into a ﬁgure 8, or a combination of these. The basic rules are: start a new stroke at the point where the previous stroke turned into a hairline; always try to pull each stroke; and avoid crossing thick strokes with thick strokes. (When writing italic at small sizes or with tools that do not have friction—such as fiber tipped broad-edged pens—it is possible to push swashes and flourishes and to make them in a single continuous motion. But to do so well requires experience and that comes with practice.)