Tutorial no. 5—Calligraphy: The Basics of Italic 2

Tutorial no. 5—Calligraphy: The Basics of Italic 3

The Basics of Italic: Entry/Exit Strokes 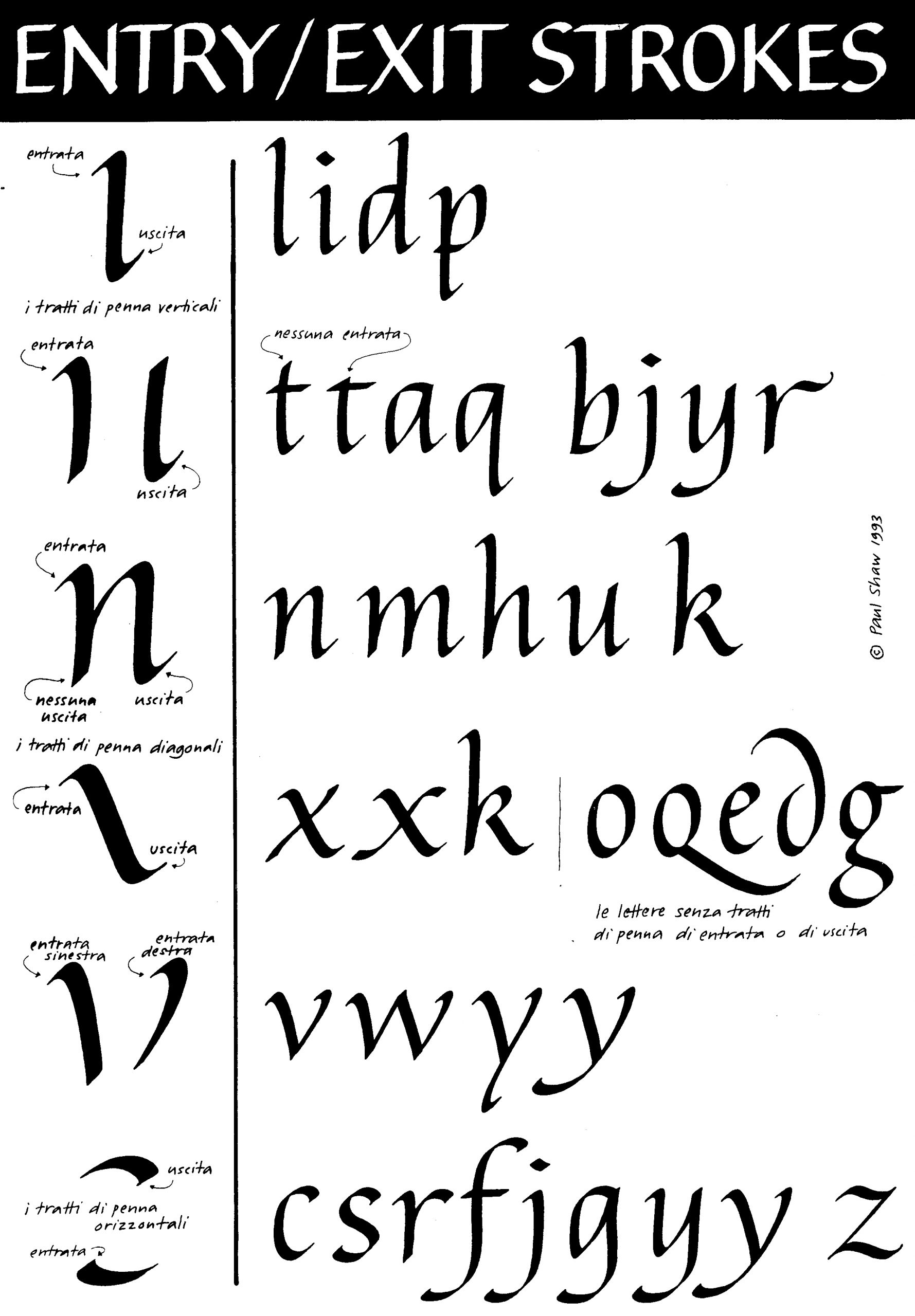 The previous two posts paved the way to making a “serif-less” Italic with the broad-edged pen. By “serif-less” I meant that the letters were missing entry (entrata) and exit (uscita) strokes. In calligraphy, Italic letters, other than some capitals, do not traditionally have serifs. But entry and exit strokes function in a similar way visually. They are both visual aids and physical/kinetic ones. Entry strokes allow the pen to more easily begin a letter and exit strokes allow the pen to gracefully ﬁnish a letter and move on to the next one. In writing, starting and stopping abruptly is as difficult as it is in driving a car or in performing sports activities such as pitching in baseball, hitting a serve in tennis, shooting the ball in basketball and so on. Thus, we can liken entry strokes to the beginning movements of a pitcher preparing to throw the ball (the wind-up) and exit strokes to follow-through of a golf swing. This third page on the Basics of Italic shows which letters have entry and exit strokes and how they ﬁt into the fundamental strokes discussed earlier.

The ﬁrst row shows letters that have a vertical stroke combining both entry and exit strokes: l i d p. Place the broad-edged nib under the ascender line for l and d; and under the waist line for i and p. Then slide the pen slightly upward and diagonally—essentially along the thin edge of the nib—before hitting the line where you curl over—as in making the arched letters (e.g. n)—and then pull down. Just before reaching the baseline start to curve and pull upward until the stroke becomes a hairline. The bottom curl is the same (in miniature) as the curl found in the reversed arch letters (e.g. u). (The ascender line marks the height of ascending letters (b d f h k l but not t) and on your master guide sheet is simply the line above your waist line.) Do not make the curls at top and bottom too sharp or too soft. Think of them as the equivalent of an elbow: sharp but not sharp like a knife. The exit stroke tends to be longer than the entry stroke due to built up momentum and the faster one writes the longer it will be. This formal upright Italic is not written quickly and therefore the exit stroke should not be too long. By making d and p in two parts the letters will have to have both entry and exit strokes. If they were made in one continuous stroke d would have only an exit stroke and p would only have an entry stroke.

Row two shows letters that do not have both entry and exit strokes. There is no entry stroke (nessun entrata) on t. In a formal Italic it should have such a short stem that the intersection of stem and crossbar creates a triangle at the left side. But writing more quickly makes this difficult to achieve and instead the stem pokes up. a and q have no entry stroke because they are closed forms. Similarly, the closed form of b means that that letter has no exit stroke. Make the a and q as before but ﬁnish with an exit stroke as in i above. For b begin the entry stroke as in l but then complete the letter as in The Basics of Italic 2. j and y have a new type of entry stroke. The curved horizontal stroke begins with a slight movement diagonally to the left before the pen moves rightward. Do not over-exaggerate this entry stroke. Doing so usually results in a big sloppy curve for these letters (and its relative g) which looks ugly. Keep the curves throughout taut.

g is in row six along with j and y again. This row is dedicated to letters that have entry or exit strokes on the curved horizontal strokes (whether eyebrows or smiles). r is a special situation as is evident by its inclusion in row three as well. To make r begin as in i and then continue as in r from The Basics of Italic 2. But complete the arm either with a short curl inward for an exit stroke (as in c) or with a slight tilde-like upward motion. The latter makes it easier to dissipate built-up momentum but it results in a longer arm and thus one that is harder to space well. On the other hand, this second r can be very decorative at the end of a word or, better yet, line. The same slightly wavy horizontal stroke is found twice in z. Slide into the stroke by moving slightly upwards under the waist line before proceeding horizontally; then, at the bottom, gently slide out of the wavy horizontal stroke for the exit stroke. Do not overdo the wiggle or the z will look like a fluttering flag. Note that f has become both an ascending and descending letter, the only such one in the alphabet. The upper portion follows the form of c and the bottom portion follows that of j.

The remaining letters (o q e d g have no entry or exit strokes—unless we include the termination of the tail on q. This group includes three alternate letters. The curled d is a cursive form that has inﬁltrated formal Italic. Normally, it would be made in one stroke with the right side being pushed up and over and terminating in a hairline. When done formally, the right side is a second stroke and the pen begins on its edge before curling over and down to meet the ﬁrst stroke. Think of it as an exploded o. The alternate g comes from Humanist Bookhand (roman). The ductus is this: make the upper bowl in two strokes like o but let it be only 2/3 or 3/4 the size of o; then pull the pen down from the lower right corner (where the transition from thick to thin and back again occurs) in the same manner as making the spine of s, though this spine should be flatter; then, place the pen on the “spine” to the right of the bump sticking out and move diagonally to the left and then curl back to meet the fourth (spine) stroke; and ﬁnally, return to the upper bowl and place the pen at 1 o’clock and pull it horizontally underneath the waist line. Keep this ear short.