From the Archives no. 14—Linoskala

From the Archives no. 15—Helvetica and Standard

Something else that I came across at the High School for Graphic Communication Arts were two issues of a former local trade magazine called Graphics: New York. Both were from 1965 and they help to pin down the moment when Helvetica arrived in New York and began to muscle out Standard (aka Akzidenz Grotesk).

The ﬁrst issue is volume 2, number 1 from January 1965. On its back cover is an advertisement from Amsterdam Continental Types, the ﬁrm that imported European metal typefaces to the United States, for Standard. It was bragging that “crisp, steadfast Standard has become a new classic in creative typography” because it now had sixteen members in its family. The featured weight was Standard Medium.

The other issue was volume 2, number 8 from August 1965. The Amsterdam Continental Types advertisement on its back cover was no longer for Standard but was instead for Helvetica. “How do you increase legibility without increasing type size? Solve for x.” was the headline. The body text went on to explain,

“Increase the volume of the letter’s body.
“That is, increase it’s x-height.That’s what the Swiss did with Helvetica.
“They designed each character to take up a greater volume of space on the type body.”

It concluded: “HELVETICA: Swiss precision, classic simplicity.”; and “HELVETICA MEDIUM: Strongly authoritative; declarative.” The magazine itself did not pay attention to these claims for Helvetica or those for Standard. It was set in Trade Gothic. However, the inside back cover of the January issue contained an advertisement by Container Corporation of America (CCA), based in Chicago, set in Helvetica Medium. 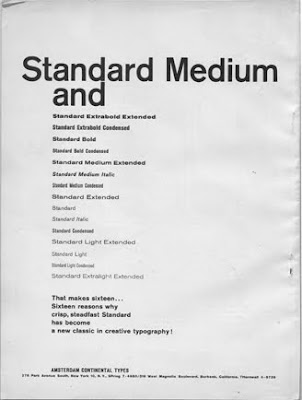 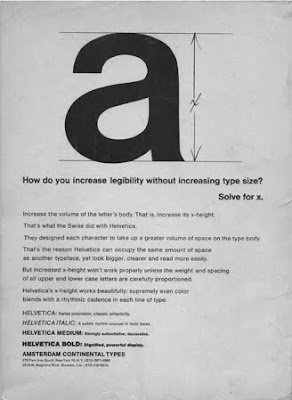 Although Helvetica Medium had arrived in New York City by August 1965, Unimark International did not spec it for the subway signage it was working on. Bob Noorda and Massimo Vignelli chose Standard instead.