Blue Pencil no. 12—Born Modern: The Life and Design of Alvin Lustig

From the Archives no. 14—Linoskala 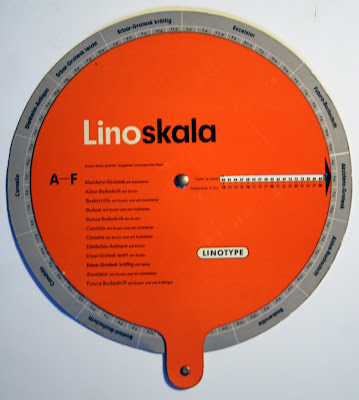 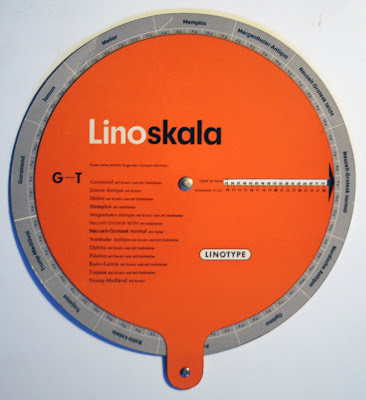 The High School of Graphic Communication Arts in New York City, originally founded in 1925 as the New York School of Printing, is changing with the times and one casualty is its extensive library of books, periodicals and ephemera about the printing industries (papermaking, binding, type design and manufacture, typography, editing and proofreading, graphic design, photography, illustration and more). Fortunately, thanks to Abby Goldstein, the material is being saved from the dumpster and will be ﬁnding a home at Fordham University. I have been helping Abby sort through everything to see what is valuable and what is not. In the course of doing so some fun and fascinating items have surfaced.

One such item is the Linoskala from Linotype GmbH, a two-sided volvelle (wheel chart) used to ﬁnd out characters per cicero for 25 Linotype typefaces (presumably hot metal rather than Linoﬁlm) at a series of [Didot] point sizes. The sizes vary from typeface to typeface with most being available in 6 pt, 7 pt, 8 pt, 9 pt, 10 pt and 12 pt while a few stop at 10 pt and Excelsior additionally offers 7.5 pt and 8.5 pt. Oddly there is no 11 pt.

There are two parts to the volvelle. One is a bright orange wheel with a handle and a viewing slot that has the list of typefaces and the cicero increments (in black) as well as Linotype’s logo. The other is a larger light gray wheel with the typeface names and point sizes in black arranged around its edge.

The volvelle is not dated but it is most likely from the early 1960s since Optima (1958) is among the typefaces. The other sans serifs are Futura Book, Neuzeit Grotesk Normal and Light, Erbar Grotesk Light and Black and Akzidenz Grotesk. Missing is Helvetica! Neuzeit Grotesk Normal has been used to set everything but the name of each typeface in the index on each side. They remain eponymous.