From the Archives no. 12—The Formation of American Type Founders 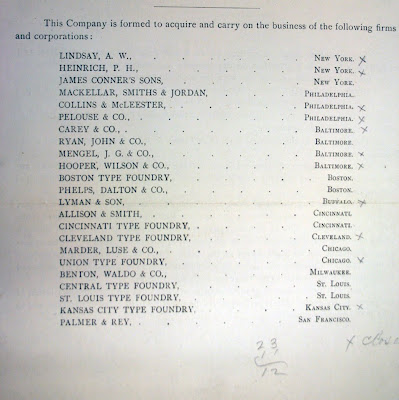 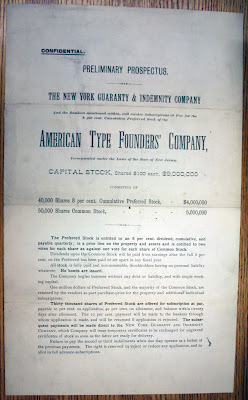 The Formation of ATF

The new year is a good time to air out mistakes and acknowledge errors. In several past Blue Pencil posts I have taken others to task for stating that American Type Founders was formed in 1892 from the merger of 23 foundries. I based my argument on several things: the genealogies of foundries in Alastair Johnston, Maurice Annenberg and other sources did not add up; the fact that several major foundries did not join the conglomerate until years later; and the listing of only twelve foundries on the title page of the 1896 ATF catalogue.

But history is only as good as its facts and new documents often change things. In this case I accidentally stumbled across a document recently that makes it crystal clear that ATF was initially formed from 23 foundries. I found the document while looking for information on a “vertical script” in the American Type Founders Collection at Columbia University. In ATF Box 7, Folder F there is a Conﬁdential Preliminary Prospectus relating to the purchase of the Allison & Smith Type Foundry of Cincinnati by The New York Guaranty & Indemnity Company dated September 15, 1891. The bankers were creating the American Type Founders’ [sic] Company.

Although 23 foundries were acquired by ATF, eleven of them were shuttered before the new company began business—even a year before the “merger” was ofﬁcially announced. This explains why the list of foundries on the title page of the company’s ﬁrst catalogue totals only twelve. The eleven liquidated foundries were: A.W. Lindsay, P.H. Heinrich, Collins & McLeester, Pelouse & Co., Carey & Co., J.G. Mengel & Co., Hooper, Wilson & Co., Lyman & Son, Cleveland Type Foundry, Union Type Foundry and Kansas City Type Foundry. Most of these were closed because they were in oversaturated markets. Although this document is from 1891 elsewhere in the folder there is an indication that the purchase of Allison & Smith was not consummated until November 1892.