What’s Online no. 3—The Catich Collection 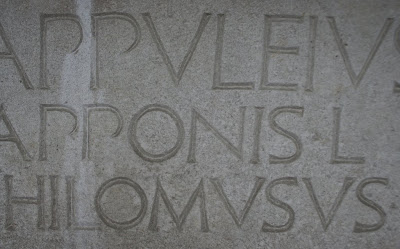 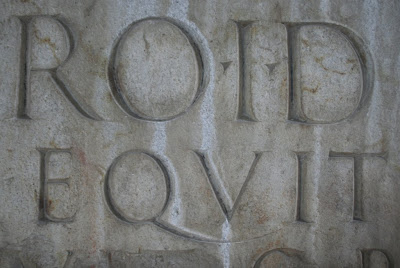 The quotation in the previous post about trying to date the shift from the use of the reed as a brush to its use as a broad-edged tool caught my attention when sifting through the Catich Collection website because James Mosley and I had been wondering when (and why) the Romans changed from making monotone letters to letters with contrasting stroke thickness. We often describe the former as Republican and the latter as Imperial because they generally correlate with those eras in Roman history, but there is no evidence that the letters changed simply because the form of government did.
Above are details from two inscriptions at the Museo Nazionale Archeologico in Aquileia, one from the Republican era (1st c. BC) and the other from the Imperial era (105 AD). The former shows some letterforms that anticipate those of the Trajan Column inscription (narrow E, splayed M and wide N) while others are typical of Republican inscriptions (circular O, P with a partial bowl and wide S). The latter shows letters that display some of the features that Father Catich found indicative of the use of a broad-edged brush as the deﬁning tool of Imperial Roman capitals (e.g. the lower left corner of the D, the bottom right serif of the I, the turned down middle arm serif on the E, the sweeping tail on the Q, and the puncti). I post these two images to show what a difference stroke contrast (or its absence) makes in the overall appearance of letters. The question remains: why did the Romans begin making letters with stroke contrast?
The answer may lie in the shift in tools from a reed used as a brush to one used as a broad-edged pen. Then again, Father Catich has shown that it is possible to make sans serif letters with a broad-edged brush. And John Stevens, one of the foremost calligraphers alive today, has demonstrated that it is possible to use such a brush to make both Imperial and Republican capitals (see the top line in the image below)*. So it is possible that the change of tool had no impact on the form of the letters. If so, then what did? 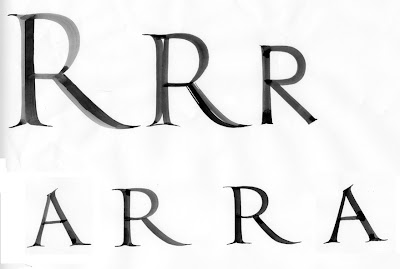