Tutorial no. 2 addendum no. 2—Castle William and A Sure Faust 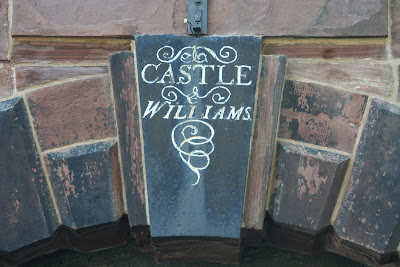 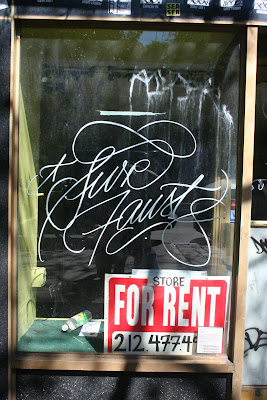 Here are two examples of lettering that I came across recently that illustrate good and bad flourishing. The bad example is from Fort William on Governor’s Island, the former Coast Guard facility that is now open to ordinary New Yorkers. The good example (A Sure Faust) is from a storefront near Raffetto’s on West Houston Street in Manhattan.

The Fort William inscription—unfortunately poorly painted—has crude curves and a tailpiece whose spiral gets tangled up at the end rather than ﬁnishing with a burst of vivacity. Part of the crudity of the curves is due to the medium, but clearly the stonecutter was not of the ﬁrst rank.

A Sure Faust has been rapidly written on glass, probably with some kind of soap. The verve of the writer can still be felt in the flourishes on the e in “Sure” and t in “Faust” as well as with the underscore. These flourishes show how important body movement (whether it be ﬁngers, hand, elbow or shoulder) is to achieving graceful and lively strokes. As so often happens with spontaneous gestures, the writing is not perfect. The ﬁrst word (“A”) is only decipherable in context and the overlap between the S and F is too tight. But A Sure Faust—what does that mean?—is still a burst of sunshine on a cloudy day.