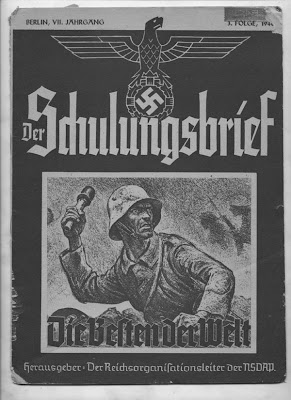 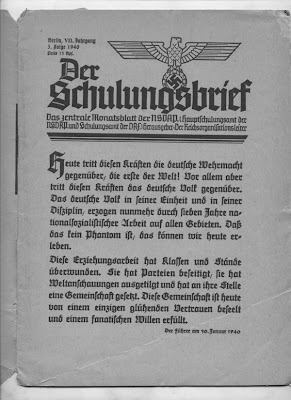 At TypeCon 2010 in Los Angeles last month I bought a copy of Der Schulungsbrief, a Nazi publication because it was dated January 1940 and I was curious about its typography. Unfamiliar with the periodical I Googled it and—to my surprise—came across an entire section of a website devoted to it. See http://www.calvin.edu/academic/cas/gpa/schul43.htm operated by Prof. Randall Bytwerk of Calvin College, a specialist on Nazi propaganda. Der Schulungsbrief was a Nazi Party monthly magazine intended for political education. It presented Nazi ideology to the masses.

Prof. Bytwerk reproduces the covers of issues from 1942 to 1944. The mastheads are handlettered in uncial and roman. My copy, devoted to the history of the German army—complete with a reproduction of a painting of George Washington at Valley Forge and an article on the Hessians who aided the colonists’ ﬁght against the British Empire—has a masthead (ﬁg. 1) handlettered in schaftstiefelgrotesk, the mechanical version of textura that became popular from 1933 onwards. The interior is set in a Baroque fraktur, probably Walbaum Fraktur except for headlines in Gotenburg Halbfett by Friedrich Heinrichsen (D. Stempel, 1937). http://www.abstractfonts.com/font/12293 The inside front cover, entitled “Der Daxelhofen” by Conrad Ferdinand Meyer (1825–1898), is set in Claudius (Klingspor, 1937) by Rudolf Koch. (The typeface was cut by Koch’s son Paul and issued posthumously.) The opening page (ﬁg 2), with a greeting from the Führer, has the masthead excellently handlettered in a style mimicking Gotenburg Halbfett which is a typeface more stripped down than the standard textura but not as harsh as Element, National, Deutschland and other typical schaftstiefelgrotesk typefaces. The text of the greeting is in Koch’s Maximilian (Klingspor, 1913–1914). Heinrichsen (1901–1980) was a student of Koch’s at the Technischen Lehranstalt Offenbach. http://de.wikipedia.org/wiki/Friedrich_Heinrichsen The back cover of Der Schulungsbrief depicts a German knight with a banner above his head bearing a quotation from Friedrich Schlegel written out in a Koch-influenced textura. Although Koch had nothing to do with the Nazis their publications often used typefaces that he or his students designed.

The discrepancy in typographic (and calligraphic) style between my copy of Der Schulungsbrief and Prof. Bytwerk’s copies is explained by the fact that on January 3, 1941 Martin Bormann issued a circular that claimed “in reality the so-called gothic script consists of Schwabacher-Jewish letters” and that henceforth “roman is to be designated as the standard letter” in the Reich.

Prof. Bytwerk’s post on Der Schulungsbrief is part of his larger website called the German Propaganda Archive whose “goal is to help people understand the great systems of the twentieth century by giving them access to primary material.” To further this aim there is a section called Visual Material which includes Nazi-era posters, racial wall charts, propaganda postage stamps, uniforms, etc. This section is a treasure trove for graphic design historians and in a future post I will talk more about this.