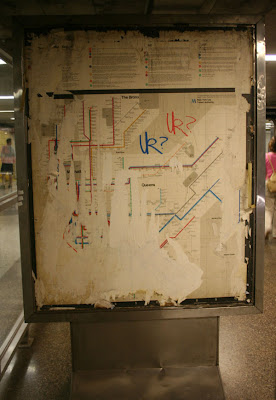 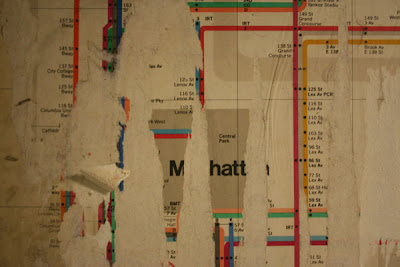 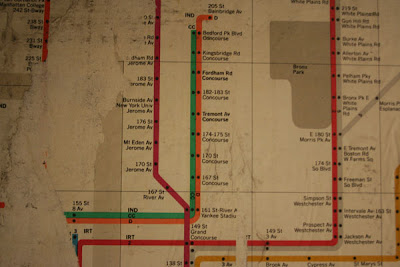 Recently, there has been buzz because a Vignelli subway map has been discovered in situ in the New York City subway system at the IND station at 57th Street and Sixth Avenue (F train). Nicholas Hall posted a photograph of the map on September 10th on his Flickr site. Then it was blogged about on Gothamist on September 16th by Jen Carlson who noted that it had appeared on the Forgotten New York website back in 1999.

Carlson’s description of the map as a redesign of “George Salomon’s New York Subway map” is incorrect since there were other subway maps in use by the NYCTA between 1958 when Solomon’s ﬁrst appeared and 1972 when the Vignelli map was introduced (not the “late 1960s” as Kevin Walsh of Forgotten New York says). Details on the various iterations of the subway map will appear in Peter B. Lloyd’s book on the history of the New York City subway maps that is now in progress.

In 1999 Walsh noted that the Vignelli map was behind plexiglas and behind a modern map which apparently accounted for its survival. When I checked out the map two days ago it was exposed without any plexiglas or other protection (unlike the other side of the pylon where a contemporary subway map was displayed behind glass). It is also, as shown in the Hall photograph, in considerably worse shape than it was a decade ago—further torn and peeling. But it is still there, which in itself is a miracle.

The map is not from 1972 even though the basic design is. My examination of it revealed that the text of the key at the top and the various individual subway stops are all set in Trade Gothic rather than in Helvetica. This means the map is a later version that was “designed” by Diamond National, the company responsible in those years for printing the subway maps.

[Greg D’Onofrio of Kind Company has pointed out to me since this post ﬁrst went up that close examination of the 1999 Flickr photograph shows a date of August [xx] 1974 in the lower right hand corner. I had guessed at a date of 1976.]

Attached are some photographs of the map, including details where the difference in typefaces should be evident. Helvetica still survives as the typeface for major information such as the names of the boroughs.