Addendum to Tutorial no. 2—Steinberg and Steinweiss 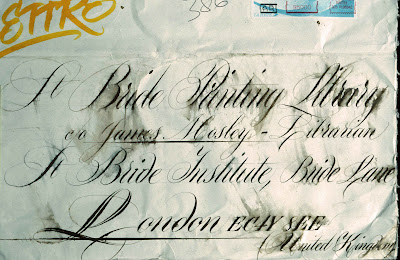 In Tutorial no. 1 I mentioned the names of a number of individuals who were adept at Spencerian lettering. One of those was Jean Larcher, who lives in a suburb of Paris and has been doing lettering and calligraphy of all kinds since the early 1970s. James Mosley, retired librarian at the famous St. Bride Printing Library in London, noticed my reference and sent me the two images that are posted here. These are details from an envelope sent to him by Larcher in 1991.

The address on the envelope is not an example of Spencerian lettering but of its forebear English roundhand, a style of pointed-pen calligraphy that developed in the 17th century and reached its apogee in George Bickham’s The Universal Penman (1741). Roundhand is more commonly known as copperplate within contemporary calligraphy circles and wedding script among the general populace. To see the difference between pointed-pen writing and its drawn descendent compare this to Tony DiSpigna’s Varcone in Tutorial no. 1.

Larcher wrote out this address using a flexible pointed pen and black Ecoline ink. His only aids—still visible—were lightly drawn guidelines for the body of the letter. This is a bravura display of skill that is not diminished by the water stains. There is no draft, no revisions, no retouching. Note the decorative L in “London” made with two separate strokes; the two different forms of B; the informal form of d in the 3rd, 4th and 5th lines (the one in “London” is especially juicy); and the swelling rules. The neoclassical capitals in the postal code were also written out with the same pointed pen. Larcher’s interpretation of copperplate is marked by ascender strokes that are pointed at the top (most noticeable in the d in the ﬁrst iteration of “Bride”). In the close-up view of the envelope the bite of the pen into the cotton paper is clearly evident.

Jean Larcher has a website where you can view more examples of his Anglaise (as he terms roundhand). He refers to this work as “straight calligraphy” but the examples are a mix of copperplate calligraphy and Spencerian lettering. Everything is done by hand, whether written or drawn. The work displays a consistently high level of skill. Two items worthy of special attention are “Celebration” (under Logos) and an envelope addressed to the Centre Reg. d’Écriture. The former is drawn and the latter written. 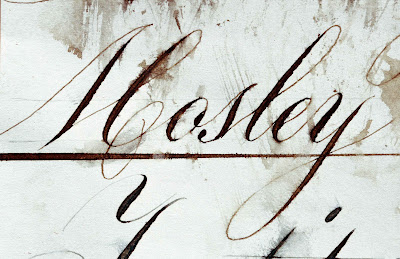