In Lettercentric, my blog for printmag.com, I recently complained about the rise of the “squigglists”, young designers who have discovered the joys of handlettering but lack the experience and knowledge of the masters of the past. I compared the work of Marian Bantjes for Saks Fifth Avenue (art directed by Michael Bierut of Pentagram) http://www.bantjes.com/index.php?id=221 to that of Tony DiSpigna, former member of Lubalin, Smith & Carnase. Unfortunately, printmag.com was not the place for an extended explanation of why Bantjes’ script work (and that of the other “squigglists” lauded today in Print, Eye and recent books by Steve Heller and Post Typography) fails to measure up to that of DiSpigna, Tom Carnase, Ed Benguiat, Raphael Boguslav, Peter Horridge, Jean Larcher, Mike Pratley and others from the heyday of Spencerian lettering from the 1960s to the early 1980s.

This—the ﬁrst in what I hope will become a series of tutorials on lettering, typography and design—is a detailed look at Varcone, a logo that DiSpigna designed for a boat owned by a friend on the island of Ischia (Tony’s birthplace).

This is the ﬁnal version of Varcone. It was rendered by hand in pen and ink on paper. The repetitive flourishes were done to suggest wind and water, the two elements a sailboat contends with. They are the result of several iterations. 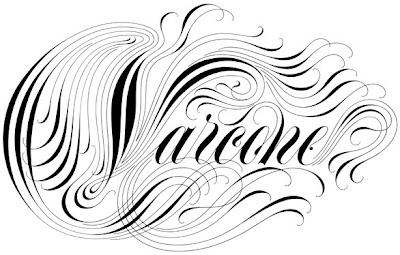 Here are three sketches showing the design in progress as DiSpigna refined it. 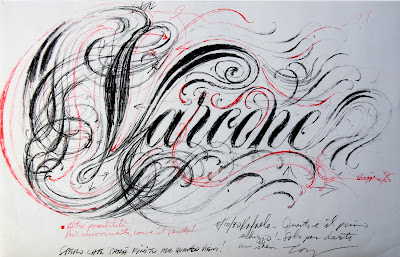 1. the drawing is roughed out in pencil and markers: “Quest’è il primo schizzo! —Solo per dartiun idea.” (“This is the first sketch!—It is only to give you an idea.”) The ﬂourishes ordinary Spencerian ones. But in red DiSpigna has indicated how they can be altered and repeated to simulate the wind. “Altre possibilità! Più movimento, come il vento!” (“Other possibilities! More movement, like the wind!) 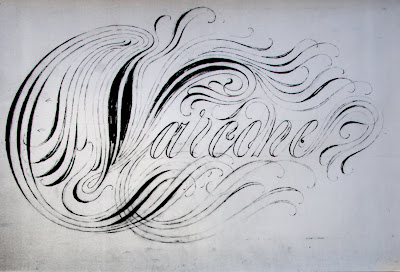 2. the drawing is reﬁned to pursue the idea of the ﬂourishes as wind and water. The letters are drawn in outline—Spencerian script is lettering not calligraphy, though it is derived from roundhand and other pointed-pen scripts—and the ﬂourishes are redrawn to achieve a careful mix of repetitive and varied forms (note those erupting from the e) and to create a design that has an overall balance of positive and negative space. The latter can be seen in the changes to the ﬂourishes erupting from the o and n. Note also the shortening of the r to allow more room for the ﬂourishes curling off of the right arm of V. The original idea of pulling ﬂourishes off of the stem of r below Varcone has been dropped as has the curl in the left arm of V. 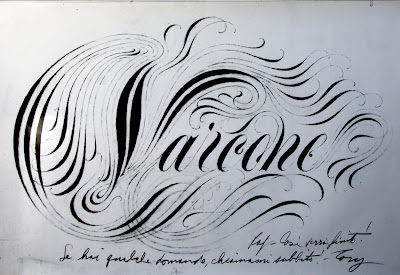 3. the drawing is roughly inked in to show the client. “Così verrà ﬁnito! Sei hai qualche domande, chiamami subbito [sic]!” (“Here you can see it ﬁnished! If you have any questions, call me!”) No changes have been made since no. 2 since this is to get the client’s approval before doing the ﬁnal inking. 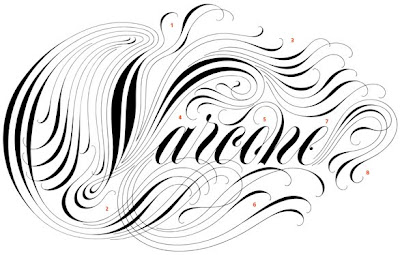 I have added numbers to the ﬁnished design to indicate areas that show how and why DiSpigna has created an outstanding lettering design not simply some letters sprouting a thicket of curlicues. The only changes from the comp above are very subtle: the curled ends of most of the ﬂourishes have been retracted and opened up a bit to add more air to the design.

1. not all of the ﬂourishes are strictly parallel. Some provide contrapuntal curves and some overlap.
2. the series of ﬂourishes coming off of the left arm of the V meet each other at the vertex of the letter where they are deftly opposed to create some tension and to suggest water rather than wind.
3. not all of the ﬂourishes spring directly from the letters. They are detached not only to suggest the wind ﬂowing over the boat but also to prevent small spaces that would visually clog up.
4. once again some air is added to the design to aid legibility and to balance the composition. The space between the V, its ﬂourish and the a complements the one inside the o ﬂourish (5) and the one above the e (7).
5. the ﬂourish on an o in the middle of a word is normally forbidden, but here it works because it works in tandem with the ﬂourish on the n to not only buoy up those swooping down from
the V but also to keep the word from being too horizontal.
6. by overlapping the series of ﬂourishes under Varcone the feeling of waves crashing into one another and kicking up salt spray is achieved.
7. both the c and e are designed to ﬁll potential holes in the design. They are longer than
normal in pointed-pen writing. The ball terminal on the eye of the e is essential to make the character decipherable. It also provides a nice counterpoint to the ﬁlled-in curl of the o.
8. the ﬂourishes curl down as well as out to draw the eye back to those coming from the left arm of the V and thus insuring that this is a logo and not just a decorated word.

If one compares Varcone to the Valentine’s Day heart design by Bantjes at the top of this post the difference in the quality of execution and design should be obvious. The shape of the heart is well done but the disposition of negative space within it is erratic and many of the curves of the letters and their swashes are awkward. Many letter combinations look forced. Here are several instances: 1. “kiss” has a beautiful double s combination but the ﬁnal s does not have a pleasant swash, the swash of the k should have curled to hint at the dot on the i (which properly does not exist), and the i needs to join the ﬁrst s in a more elegant manner. 2. “sweetheart” has an sw combination that is anything but sweet as the s collides with the left stroke of the w rather than creating a graceful opening for the word. Similarly the hear sequence is a series of stop and start curves and angles that has the rhythm of a tormented romance. These are inept letters by any standards. 3. “darling” has equally inept letters, but the rl combination especially stands out for the way the r looks as if it has been kicked in the shins and the l is sinking below the baseline in embarrassment as it fails to smoothly join to the i. 4. “be mine” is the last straw as the dot-less i looks like an l as it rises past the e above to join the g in “darling”—or is looping back below the e in “flame” (I think that is the word) and bouncing around the e in “mine” to complete the bottom of the heart? This is a good design idea in need of a few more rounds of sketches to iron out its problems.

Note: This post and my printmag.com post are not criticisms of Marian Bantjes’ work in toto. Much of it I admire. Here I am only focusing on one area of her oeuvre.