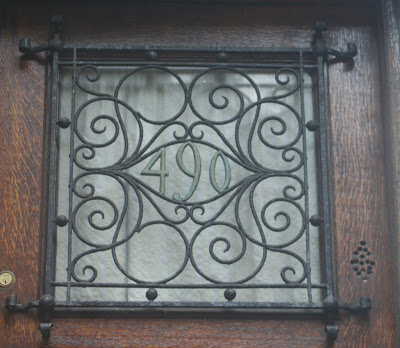 Marian Bantjes has responded to my posts about her Saks Fifth Avenue heart. Here is here comment and below it my response.

Paul, for you to use my Saks heart as a comparison to a Spencerian script is madness. It bears absolutely no relation to a formal script (the first clue being that it is a monoline), nor was it meant to. The letters do not flow properly from one to the next because I didn’t want them to. The letterforms in the heart are forced (yes, forced) into hiding by an abstraction of curves and lines. It is not a series of scripted words with flourishes which happen to make a heart, it is heart made of curlicue shapes in which letterforms are hidden. It combines rounded and angular forms on purpose … in fact, that is what I *do* in much of my work, is break the forms. You have one or two valid points (eg. about the “ki”), and you are certainly allowed to dislike the piece, but to use it as an example of “how not to do Spencerian script” is akin to critiquing a pie for how not to bake a cake.

My comparison is not madness. I am not criticizing your work for not being Spencerian or looking like formal script. I am criticizing it for the quality of its curves. It does not matter if the curves are swelling as in Spencerian or monoline as in your work. There are beautiful curves and there are awkward ones. I understand that your work is often built on the collision of curves and angles—and that is what I frequently like since it takes your work out of the realm of the precious or the historicist—but in this instance the combination does not always succeed. It works best along the edges of the heart but not within where you are dealing with letters and words and not just pattern. The problem is not that you have baked a pie instead of a cake, but that your pie is half-baked. 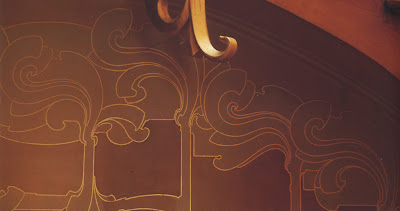 Since you do not want to be compared to “professional” letterers I thought I would look at your curves, especially your monoline ones, in comparison to decorative work in architecture, especially wrought iron. (The image at the top is from the door to a church rectory on Paciﬁc Street in Brooklyn.) To see what I consider to be gorgeous, dynamic and organic curves look at the work of the Belgian architect Victor Horta (1861–1939), especially in the Maison Horta (1898–1901) and the Hôtel Tassel (1893–1895), both in Brussels. The image above is from the Maison Horta. It is a painted mural at the base of the staircase. (See p. 120, Musee Horta, Bruxelles Saint-Gilles by Françoise Dierkens-Aubry (Brussels: Credit Communal, 1990). Also see examples of curvaceous designs in metal, stained glass, wood, tile and stone from the house on pp. 41, 84–86, 92–94, 102–103, 112, 114, 121, 122, 124; and p. 38 for the Hôtel Tassel.) This particular detail shows curves that abruptly change direction as well as others that grow in a Fibonacci manner. It seems somewhat akin to your attempts to combine angles and curves in the Saks Fifth Avenue heart. But I believe that Horta creates a more successful whole from his kit of parts than you do. His design has a better balance of negative spaces and a more satisfying line quality, one that caresses the eye. Of course, he is not integrating letters into his designs and so a direct comparison is not possible.