Tutorial no. 4—Designing with Lettering

A Case Study no. 1—Chocolate & Zucchini

Several years ago I was hired to ﬁx part of a book title. The book was Chocolate & Zucchini: Daily Adventures in a Parisian Kitchen, a cookbook/memoir by Clotilde Dusoulier (New York: Broadway Books, 2007), a spin-off from her website of the same name.

The problem was the word “Zucchini”. The jacket designer had set it in a typeface called Scriptina, a free font from Frederick Nader (aka Apostrophe) (2000–2001)*. Although the font is full of zesty letters, they do not always set comfortably within a word. The jacket designer was upset with the way “Zucchini” looked and asked me to improve it. 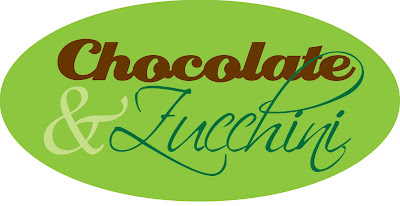 These are the sketches I made exploring what could be done to make “Zucchini” feel more like lively script lettering than a typeface. (I apologize in advance for the small size but this compound image, originally scanned in black and white, is the only one I have at hand.)

No. 1 is a tracing of the type with some problem areas identiﬁed (the crossbar, the loop and the swash of the Z; and the leg and swash of the n) and some already adjusted (the pair of cs and the dots on the is). They are indicated by arrows. The second c has been shortened to prevent monotony while the dot on the ﬁrst i has been lowered to avoid a collision with the loop of the h (and the dot on the second i matches it). These are the minimal changes needed to make type look more natural. Not marked is the improved joining of the characters.

No. 2 is a tracing of no. 1 with suggestions as to how to change (not necessarily improve) the Z. The upper swash has been reduced, the crossbar has been lengthened, the loop reduced to a knot, and the angle of the bottom swash has been flattened out to hug the word better. The loop on the h has also been adjusted make it more open. The n leg has been changed so that it its slope is closer to that of the following i and the swash has been elongated.

No. 2A is an exploration of what happens if the new Z swash is extended under the h so that it does not create a visual logjam with the ch. The upper swash has been further reﬁned.

No. 2B reduces the size of the upper swash of Z even further and flattens its bottom swash even more. Also the loop of the h circles back on itself. 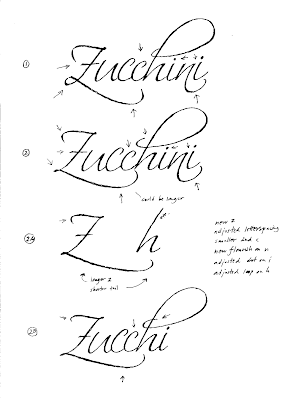 The jacket designer chose no. 2A but was unsure about whether to keep the crossbar on Z or not. Versions with and without it were digitized by Peter Bain, with whom I worked on the Blackletter: Type and National Identity exhibition at Cooper Union (1998). They can be seen below. 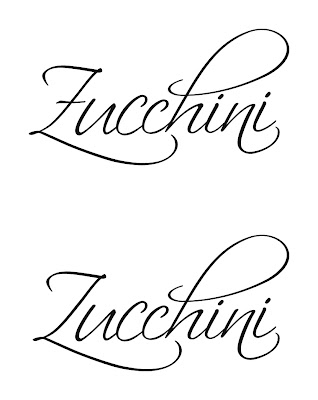 I like the version with the crossbar. But the jacket designer preferred it without. Here is the jacket as it ﬁnally appeared.

*Warning: a Google search of Apostrophe leads to claims of font piracy by Fred Nader, though none mention Scriptina.