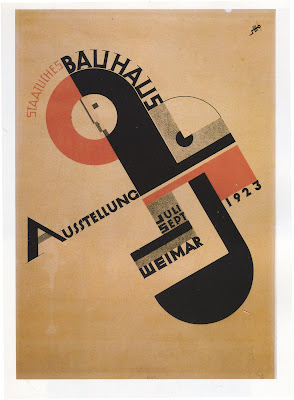 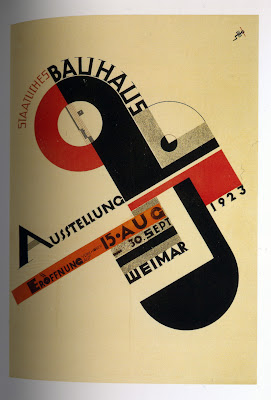 The recent Bauhaus 1919–1933: Workshops for Modernity exhibition at the Museum of Modern Art included the two iconic posters by Joost Schmidt and Fritz Schleifer done for the seminal 1923 Bauhaus exhibition. It was good to see them in the flesh rather than as reproductions. They make a terrific pairing: Schmidt’s showing the influence of El Lissitsky and Schleifer’s showing the influence of Theo van Doesburg. Russian Constructivism on one hand and Dutch De Stijl on the other.

But something bothered me about the Schmidt poster (from the collection of Merrill C. Berman) on my first visit to the MoMA show. And again on my second visit. It did not look as wonderful as I remembered it. I finally examined it as closely as the guards would allow and discovered that it had an extra strip of paper glued to it that was upsetting the carefully balanced design. The wall label made no mention of this. And neither did the entry in the exhibition catalogue.

The label says “ERÖFFNUNG VERSCHOBEN AUF 15 · AUG / — 30. SEPT”. It is an announcement that the opening of the exhibition has been shifted from August 1 to August 15. The first line is lettered in black on an orange band with the second line in black on a pepper-and-salt background that matches empty bands above and below the patch. The orange color clashes with the red that appears elsewhere in the poster. And the lettering of the ﬁrst line does not match any of the other lettering in the poster. It has more of an Art Deco look than a Constructivist one.
Is the Berman poster a unique copy that has survived? Why did MoMA choose to show it rather than a pure one, especially if they were not going to mention the added strip? Or did the curators somehow miss this?