From the Archives no. 9—Typographic Sanity 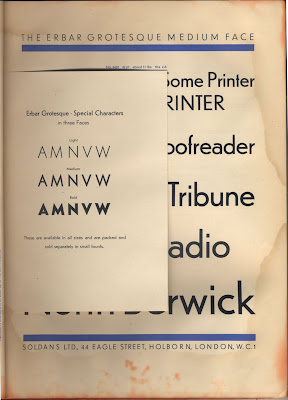 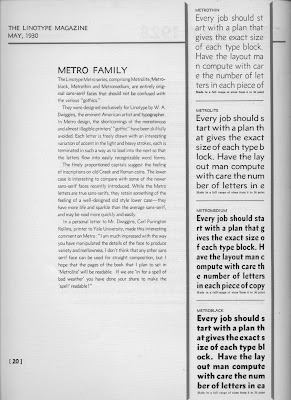 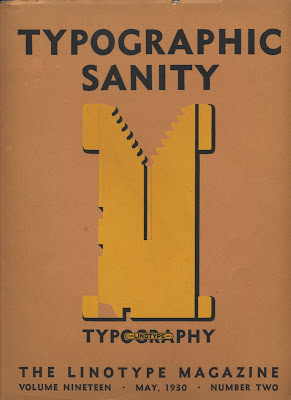 The May 1930 issue of The Linotype Magazine (vol. 19, no. 2) issued by Mergenthaler Linotype is entitled “Typographic Sanity.” It opens with this look back at the typography of the 1920s:

“The descent was easy; from black to blacker, from fanciful to grotesque, from freaky to freakier, but when we have plumbed the depths, when the tastes of printer, of customer, of reader are all thoroughly debauched, when we have achieved the ultimate in blackness, in illegibility, in riotous disorder—then to seek the return to the brighter regions of calm and ordered sanity; to reaccustom our ink-sated and jazz-jaded senses to a normal scale of values—this is labor, and this is the path that lies just ahead of the users of type.”

The author—most likely Harry Gage—is complaining not about the “new typography” emerging in Germany and Eastern Europe, but about the Art Deco typography then in full bloom in the United States. The typefaces that he had in mind were Broadway, Parisian, Gallia, Modernique, Chic, Novel Gothic, Bernhard Gothic, Futura, Kabel, Futura Black, Bifur—and probably Cooper Black. Linotype positioned itself as the voice of “typographic sanity”, of moderation, good taste and good sense, in a design world run amok.

The editorial was set in Metrolite, part of the new Metro series designed in 1929 by W.A. Dwiggins. The remainder of the magazine consisted of a series of excerpts on the theme of typographic moderation from back issues of The Linotype Magazine published over a period of a decade and a half, each set in a Linotype typeface that exemplified this sobriety. The final specimen was the full Metro family. Of it, Gage wrote:

“In Metro design, the shortcomings of the monotonous and almost illegible printers’ ‘gothic’ have been skilfully avoided. Each letter is freely drawn with an interesting variation of accent in the light and heavy strokes, each is terminated in such a way as to lead into the next so that the letters flow into easily recognizable word forms.

“The finely proportioned capitals suggest the feeling of inscriptions on old Greek and Roman coins. The lower case is interesting to compare with some of the newer sans-serif faces recently introduced. While the Metro letters are true sans-serifs, they retain something of the feeling of a well-designed old style lower case—they have more life and sparkle than the average sans-serif, and may be read more quickly and easily.”

The recent sans serifs that Gage was alluding to are Futura, Erbar, Kabel and their ilk. In his view—and that of Dwiggins (who may have provided some of the phrases used by Gage to describe Metro—these sans serifs were acceptable in the capitals but poor in the lowercase due to their reliance on geometric conformity. All of the quirks of Metro, such as the lowercase a, e and g, were designed in reaction to the Futura model. Ironically, in 1931 Dwiggins and Mergenthaler were forced by the market to change those characters and several others to more closely follow Futura. The a and g were redesigned to be single-story letters and letters with diagonal strokes were given sharper apexes and vertexes. This design, labeled Metro no. 2, became the popular version of the typeface over the following decades (viz., Geometric 415 from Bitstream).

Mergenthaler was not alone in its failed attempt to counter the geometric sans serifs with a more humanist design. Monotype created alternate characters (a and g most notably) for Gill Sans to make it more saleable in Switzerland and Germany. Erbar also underwent a Futura-ectomy to make its A, M, N, V and W pointier. See The Erbar Grotesque in Three Series type specimen issued by Soldans Limited (London: n.d.).