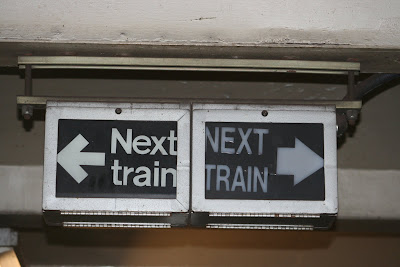 Blue Pencil is pleased to announce the ﬁrst Blue Pencil Editions publication: Helvetica and the New York Subway System: The True (Maybe) Story. This is an updated, expanded, annotated and profusely illustrated version of the essay originally written by me for AIGA Voice in the fall of 2008. The book version takes into account new information and is supplemented by comprehensive notes, a bibliography and a chronology of the New York City subway system. Prof. Clifton Hood, author of 722 Miles: The Building of the Subways and How They Transformed New York (1993), has written an introduction.

The hardcover book was designed by myself and Abby Goldstein. It was printed by Capital Offset Company of Concord, New Hampshire and bound by Acme Bookbinding of Charlestown, Massachusetts. It is covered in black linen with “Subway” stamped in white foil on front and back in Akzidenz Grotesk BQ Medium and Neue Helvetica 65 (Medium) respectively. It is sewn with golden yellow headbands to match the golden yellow endpapers. The paper is Anthem matte coated. There are 273 images including many reproductions of pages from various MTA and NYCTA signage manuals.