Paean to Wilhelm-Klingspor-Schrift: Textura in pinstripes 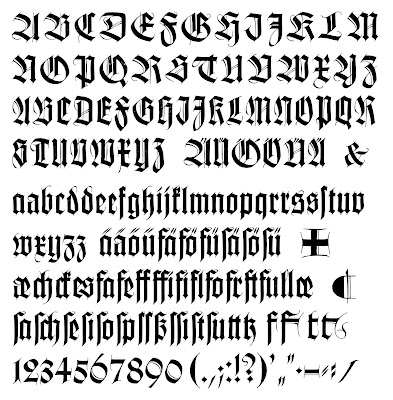 One of the most impressive metal typefaces of the 20th c. is Wilhelm-Klingspor-Schrift (also known as Wilhelm Klingspor Gotisch) designed by Rudolf Koch between 1919 and 1926 for the Klingspor Foundry in Offenbach am Main. It is a blackletter, specifically a textura. But it is no ordinary textura. It is sharp. Both in the sense of being spiky (as Steve Heller would expect of a blackletter) and in the sense of being natty. Wilhelm-Klingspor-Schrift is elegant. It is the diametric opposite of the rough hewn Deutschschrift (1910), Koch’s first blackletter.

The elegance of Wilhelm-Klingspor-Schrift is partially due to its delicate decoration, the thin (but subtly swelling) lines that parallel or bridge strokes in the capitals. But it is also due to the hairline endings that terminate each stroke in both the capitals and the lowercase. The graceful curves, most notable in the capitals but also present in lowercase letters such as d, h and w, also play a role. The broad-edged pen is evident everywhere.

The available digital versions of Wilhelm-Klingspor-Schrift are disappointing. Adobe/Linotype’s version (called Wilhelm Klingspor Gotisch) is beautiful but not entirely faithful. To appeal to modern eyes not used to certain blackletter characters k, x and X have been redesigned. The new designs are well-done but the diagonal x disrupts the darkness and vertical patterning of a block of text. A version called Wilhelmschrift from Stephen Miggas (Aerotype, 2006) repeats the same modern x, even though it is ostensibly based on a 1927 Klingspor Foundry specimen book showing. More seriously, Miggas replaces the original k with the tz ligature! (Oddly, neither Adobe/Linotype nor Miggas sought to redesign the A which is often mistaken for a U.)

In trying to make Koch’s face suitable for an OpenType world Miggas creates a number of characters that never existed in the original: per thousand, aesch, thorn, Spanish accents, Æ and Œ dipthongs, guillemets, etc. Some are bearable (the Œ dipthong), some are crude but understandable (the @ sign), some show a misunderstanding of the calligraphic underpinning of the typeface (the double dagger ‡), and others are ridiculous mashups (the thorn ð which is created from an upended 9 with a bar through it). Adobe/Linotype hasn’t done any better. Many of these characters are left in generic sans serif form while those that are designed range from the inept to the dull. The dollar sign is acceptable but not imaginative while the euro, yen (¥)and florin (ƒ) are all abysmal, the Æ and Œ dipthongs are worse than those of Miggas, and the pilchrow is ludicrous.

But the most disappointing thing about both the Miggas and Adobe/Linotype versions of Wilhelm-Klingspor-Schrift is the paucity of characters available. Koch’s original design included two sets of capitals (normal and condensed); alternates for a, d, e, r, s and z (plus long s); short and long decorative flourished finial forms for f and t; and 35 ligatures. The only accented characters are for German and Scandinavian languages (umlauts and o-rings). There are also 33 decorative elements called Zierstücke. They are shown on p. 109 of Rudolf Koch: Letterer, Type Designer, Teacher by Gerald Cinamon (New Castle, Delaware: Oak Knoll Press and London: The British Library, 2000). Wilhelm Klingspor Gotisch has only 15 of the ligatures and none of the alternates, finial forms or decorative elements. The capitals in Wilhelmschrift are an arbitrary mix of the normal (A, F, H, K, M, S, T, U, W, Y and Z) and condensed forms (B, C, D, E, G, I, L, N, O, P, Q and R). (The J is actually the wide I and V seems to have been created from the wide W.) The font has none of the ligatures other than the dipthongs and none of the alternates or finial. Koch’s pilchrow, a medieval capitulum form, has been ignored. Miggas’ Wilhelmschrift Ornaments font contains all of the Zierstücke plus a few additional calligraphic flourishes.

The glory of Wilhelm-Klingspor-Schrift, its large character set designed to accomplish justification following the tricks of the scribe (ligatures and narrow characters and the occasional extended finial character), is lost in the digital versions. This is a typeface that should thrive in the OpenType world.

Note: the sample of Wilhelm-Klingspor-Schrift above was set in metal by Michael Babcock of Interrobang Press. The first two lines show the normal or wide capitals. The third and fourth lines show the narrow capitals and the accented capitals (both wide and narrow—the narrow Ä and Ü have been transposed). The lowercase letters in lines five and six include the alternates. Line six has all of the accented lowercase characters, including f and long s ligatures—and the iron cross. Lines seven and eight show the remainder of the ligatures and the finial characters. The figures and punctuation are on line nine (note that Koch did not design brackets or braces).