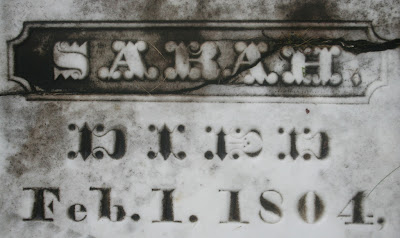 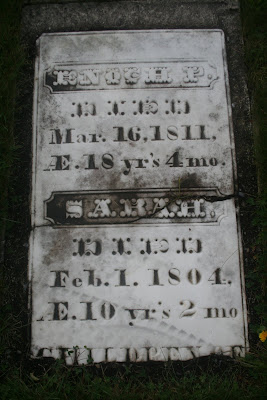 The gravestones in Midcoast Maine reveal some other oddities.

That of Mary Butman (d. 1848), wife of Samuel Butman, has an odd form of underscore in the abbreviation for Samuel: a short line under the l and below it three dots in increasing size.

That of Peter Hilt (d. 1845) has a similar underscore for the abbreviation of September: a thin short line under the t and below it two dots.

I have never seen these forms of abbreviations before. Presumably, the same carver was responsible for the Mary Butman stone in the Gordon Cemetery (Searsport) and the Hilt stone in the cemetery on Route 225.

The joint gravestone of Enoch P. (d. 1811) and Sarah (d. 1804) [last names unknown, but both children when they died and thus likely to have been brother and sister] has a very unusual ornamented letter for their names (in relief) as well as for DIED (incised). Despite the death dates the stone was carved in the 1850s or later since it is marble and not slate. The letter is clearly typographic in origin as a small example of it appears in American Wood Types: 1828–1900 by Rob Roy Kelly on p. 202. Kelly does not identify his source, only indicating that the face (and the others shown alongside it) were popular in the 1850s in France and England—thus supporting the assumption that the stone was carved later than the dates on it. In which country did the face originate? Which American foundries or wood type manufacturers offered it? Where did the stonecutter discover it?