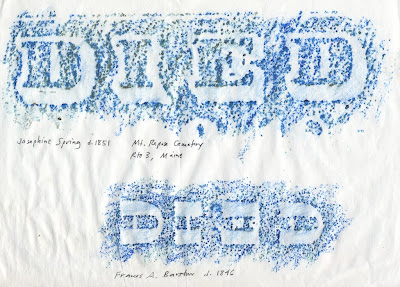 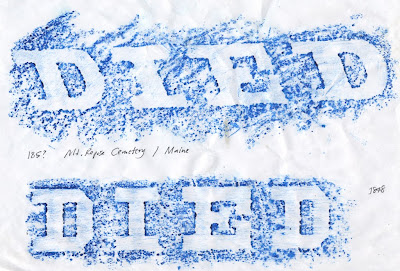 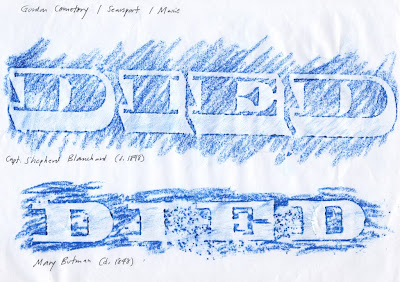 During my vacation in Maine a few weeks I visited as many cemeteries as I could find in the mid-coast region with the aim of finding gravestones from the 18th century that showed evidence of vernacular carving. I failed miserably. The earliest stone I was able to locate was from 1798 and it was in poor condition. But what caught my eye were stones that were laid out and carved typographically. That is, they looked very much like the broadsides and ephemera of their time which was mainly the decades from 1820 to the Civil War.

I am posting here rubbings I made from several of them of a single word: DIED. On each stone this word was given its own line and always carved in all capitals. The style of capitals of each is inspired by a contemporary typeface. I have not yet identified each of them, though most will look familiar to anyone knowledgeable about 19th century type designs.

The stones (and their general typographic styles) are:

Other type styles that appear on these stones are: Fat Face, Reverse Italic Fat Face, Gothic, and Reverse Italic Gothic. The question is: what happened c. 1820 to cause a radical change in gravestone epigraphy in New England?